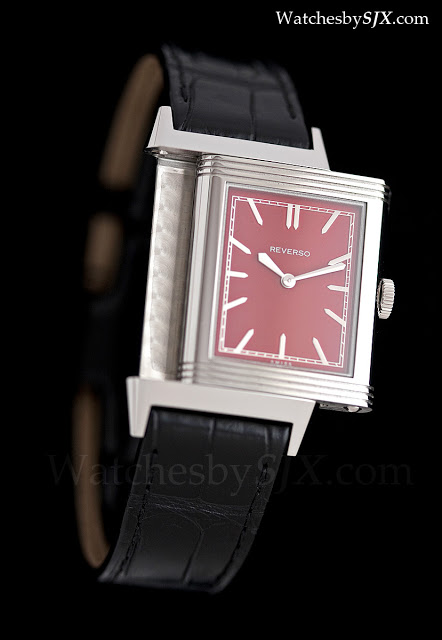 In the thirties JLC made the Reverso with various colourful dials, in addition to the more common black or white. The Reverso Rouge is a remake of a uncommon Reverso with a red dial. The Reverso Rouge has a glossy red lacquered dial with painted silver markers. The dial is a muted red tone, oxblood in colour that will work equally as well as a man’s or lady’s watch. On the other hand the original had luminous markers. And the shade of red used for the original is also slightly brighter. The Reverso 1931 measures 46 mm by 27.5 mm, while the original from the thirties is a dainty 38 mm by 23 mm. And the modern 1931 is clearly a better watch than the original in the sense that the case is more rigid and substantial, which means much better water-resistance. I would think the pigments used for the dial and markers are superior as well, which means the dial would fade little in the coming decades. For someone who wants something with a bit more flair, the Reverso Rouge is the perfect alternative to the standard black dial Reverso 1931. Besides its unusual dial colour, the Rouge is only available at JLC boutiques which means it will be far less common than its black dial sibling. The retail price is USD8400. – SJX