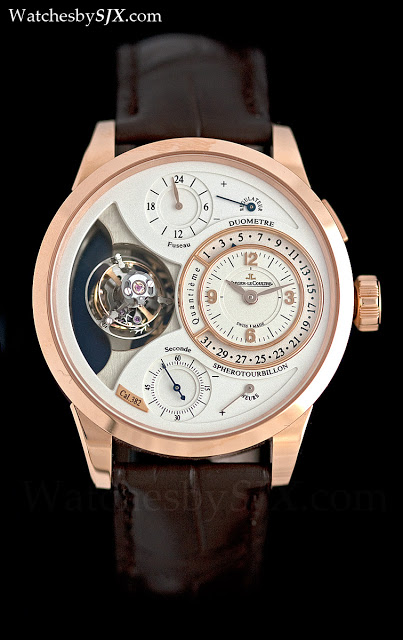 Jaeger-LeCoultre’s flagship complication for 2012 is the Duomètre à Sphérotourbillon. It has twin barrels and gear trains – what JLC calls the “dual wing” concept – one to power the tourbillon and the other for the time display. Impressive as this is, it is hard to top the watch that started it all, the Gyrotourbillon 1.

Pictured here in the 42 mm rose gold case (also available in a platinum limited edition of 75 pieces), the Spherotourbillon gets its name from its dual axis tourbillon. One axis is centred on the balance wheel and the other is inclined at an angle which gives the tourbillon cage a motion like that of a spinning top. It is a shame the tourbillon can only be seen through the dial; there is no sapphire opening in the case side like what Greubel Forsey does. In addition this has an instant seconds reset, press the pusher at two o’clock and the seconds hand flies back to zero and starts immediately. This is to allow for more precise setting of the time. According to JLC, the twin barrels are necessary for superior chronometric performance as the seconds hand can be reset without affecting the amplitude of the tourbillon. I am somewhat sceptical about this since the seconds reset is a minor feature that doesn’t use lot of torque. I would think the seconds reset can be accomplished with a single barrel and no drop in amplitude. Nevertheless the watch itself is impeccably executed. It is attractive with a well balanced dial. There is quite a lot of text on the dial, giving it an appropriate, slightly nerdy air. More importantly, the movement finishing is top class, one of the best JLC I have seen.