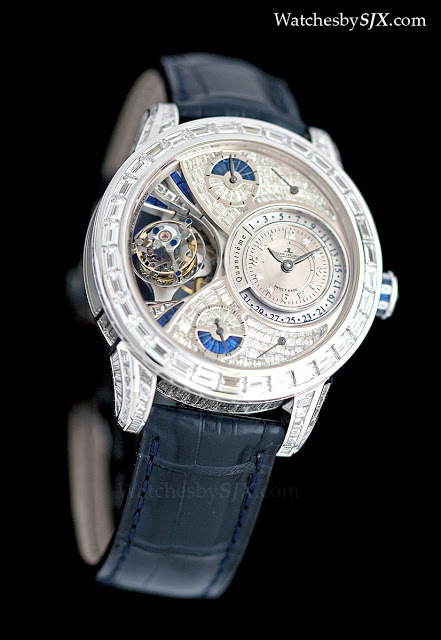 Jaeger-LeCoultre unveiled several spectacular high jewellery timepieces at Watches&Wonders, including the Duomètre Sphérotourbillon high jewellery limited edition, set with a stunning 22 carats of baguette diamonds with a sprinkling of sapphires. First unveiled at last year’s SIHH, the Jaeger-LeCoultre Duomètre à Sphérotourbillon is the successor to the seminal Gyrotourbillon, the high complication which put JLC on the map as a maker of high complications. JLC recently presented a high jewellery limited edition Spherotourbillon in white gold, entirely decorated in diamonds and blue sapphires. Nearly every available surface on the front and sides of the watch has been set with 368 baguette-cut diamonds, with 36 blue sapphires to match the blued steel screws on the tourbillon carriage. The white gold case is a substantial 44 mm in diameter, and the effect is dazzling. Mechanically this watch is identical to the original Spherotourbillon. The movement has twin barrels and gear trains, one for the time and the other for the tourbillon. The tourbillon sits in an aperture at nine o’clock and makes one revolution a minute in a motion similar to that of a spinning top. That’s because the tourbillon moves on two axes: one centred on the balance wheel and the other is inclined at an angle.

But a significant improvement exists in this high jewellery version – the watch case has a large sapphire window on the side of the case, providing a view of the tourbillon carriage. This was regretfully absent on the original version. The high jewellery Spherotourbillon retains all the functions of the original, including the zero reset seconds activated by the button at two o’clock for more precise time setting. The glittering gemstones make the indicators mildly unintelligible but that’s a minor consideration.

Also set with diamonds and sapphires, the crown is an impressive example of gem-setting in itself. Turn the watch over and the landscape is more restrained and nuanced. The twin barrels are obvious on the left of the movement, each with a grande sonnerie style winding click. As is expected of a JLC high complication, the movement decoration is excellent. Observe the polished teeth of the barrel ratchet wheels below, as well as the more obvious details like the anglage on the bridges. Likely too much for most people, but just right for the a fortunate few, the Duomètre Sphérotourbillon high jewellery is limited to 5 pieces and retails for €700,000 excluding taxes, equivalent to about US$948,000 or S$1,190,000. – SJX