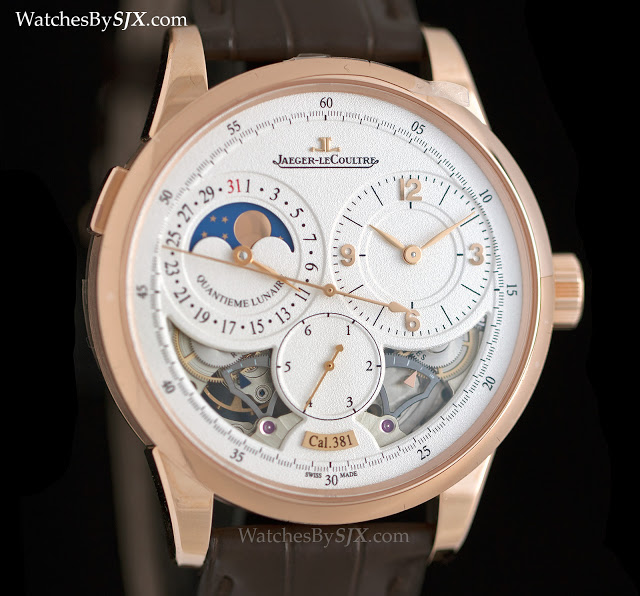 Equipped with twin power sources, one for the time and the other for the multiple displays, the Duomètre à Quantième Lunaire is a complicated watch with an unusual combination of functions, including a moon phase and a 1/6th of a second counter. Rather than a single major complication, the Duomètre à Quantième Lunaire features several minor ones that together make it interesting; the whole is greater than the sum of its parts. The Duomètre à Quantième Lunaire features a moon phase, date, twin power reserve displays, and a lightning seconds, powered by what Jaeger-Lecoultre terms a “dual wing” movement with twin barrels and gear trains. The origins of “dual wing” Originally devised for the grande and petite sonnerie, which required twin barrels to power the timekeeping mechanism and the automated striking mechanism, the “dual wing” concept has been appropriated by Jaeger-LeCoultre for an entire line of watches known as the Duometre. The Duometre collection began with a chronograph, then continued on with Spherotourbillon, which used one mainspring to power the tourbillon and the other for the flyback seconds. Likewise, the Duomètre à Quantième Lunaire has one barrel that drives the timekeeping portion of the movement, meaning it powers the escapement and time display. All the other indications – the moon phase, lightning seconds and date – are powered by the second barrel. Segregating the power source and transmission is meant to improve timekeeping by ensuring that the regulator has a consistent and uninterrupted supply of energy. In an ordinary movement, the energy transmitted to the regulator drops every so slightly when the date changes, because a sliver of energy is required to advance the date display. This is one reason why constant force mechanisms were invented. A new face for the Duomètre à Quantième Lunaire While the Duomètre à Quantième Lunaire was originally introduced several years ago, it was face-lifted this year. The latest version features an open-worked dial, with twin apertures on either side of the 1/6th of a second counter. Each aperture reveals the fan-shaped power reserve gear that indicates the remaining energy in each barrel. Beyond the apertures, the look is the same as the other Duometre models, with an eggshell-textured dial. While the 1/6th of a second counter runs constantly, the central seconds hand is linked to the time-setting mechanism and resets to zero when the crown is pulled out to set the time. Only when the crown is pushed back in does it resume its motion, ensuring that the time can be synchronised precisely. The calibre 381 movement Like the other Duometre movements, the Quantième Lunaire has the twin barrels on the top half of the movement, each with grand sonnerie style winding ratchets that allow for winding of each barrel by turning the crown in opposing directions.

The look is lavish in appearance and engaging, with radial striping on the bridges and blued steels screws. Though the movement is carefully done and nothing appears amiss, the decoration is mostly done mechanically. The bevelling of the bridges for example is clearly done with an electric tool that resembles a dentist’s drill. The result is typical of Jaeger-LeCoultre’s unique approach that blends industrial production and high horology. The verdict  This is an good-looking and interesting watch. The combination of complications is unusual and unique, however, it is not a logical or intuitive union as it is in a chronograph or grande sonnerie. An unkind conclusion would be that it was conceived just to put the Duometre concept to good use. Few other brands can produce watches like Jaeger-LeCoultre, blending complications, attractive finishing and competitive pricing. The Duomètre à Quantième Lunaire is available in pink gold, with a case diameter of 42mm. It is priced at US$39,200 or S$55,500.