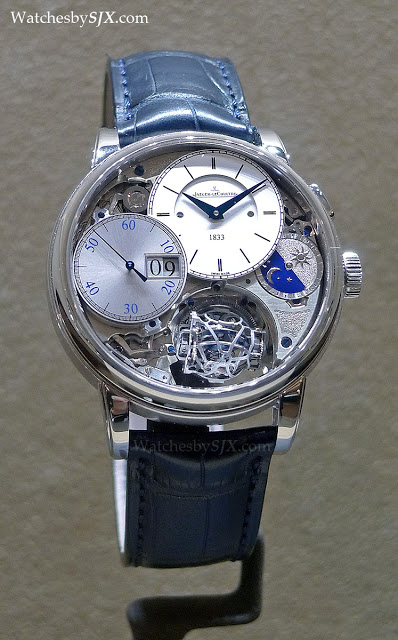 As usual Jaeger-LeCoultre unveiled a diverse array of watches, in varying shapes and complications; many of which are also competitively priced. This is the 180th anniversary of Jaeger-LeCoultre (or more specifically the founding of Antoine LeCoultre’s workshop in Le Sentier) and so there are watches to mark this occasion. These new watches are part of the Master Grande Tradition line and sport a new case design for JLC, with rectangular, stepped lugs.

The 1833 Jubilee collection is a trio of platinum watches, the most complicated of which is the Master Grande Tradition Gyrotourbillon 3 Jubilee, the third instalment in the Gyrotourbillon series, probably JLC’s most successful and highly regarded complication.  This differs from the earlier Gyrotourbillon in several major ways. First the Gyrotourbillon 3 is a flying tourbillon, so it has no bridge across the dial. In addition, it has a spherical (not cylindrical) hairspring. And lastly it has a monopusher chronograph function with a digital minute counter, integrated into the seconds sub-dial at nine o’clock. Limited to 180 pieces, this has a perpetual calendar as well as tourbillon with cylindrical hairspring. The cal. 985 is self-winding and the rotor has a relief of the medal JLC won at the universal exposition of 1889. The silver-grained dial has a traditional layout and design, but the cylindrical hairspring makes it unusual. Though simple it is an attractive watch.

And the simplest watch of the trio is indeed very simple. The Master Ultra Thin Jubilee is 39 mm, in platinum, and a mere 4.05 mm thick. That makes it the thinnest manual wind wristwatch on the market today. Inside is the JLC cal. 849, which dates from the seventies, but at 1.85 mm high it is still one of the slimmest calibres around, reflecting JLC’s past specialty in ultra-thin movements. This is a simple timepiece, but the “1833” on the dial disturbs the simplicity greatly. Only 880 of these will be made. Another new model in the Master line, and one that will sell well due to its competitive pricing and classic design, is the new Master Calendar, which harks back to the same model of the nineties. Now slightly smaller in a 39 mm case, the Master Calendar displays the day, date, month and moon phase in a traditional manner. Available in rose gold or steel, the movement is the automatic cal. 866. And to sum up the round watches from JLC is the Deep Sea Chronograph Cermet. Previously available in steel, the Deep Sea Chronograph is now available in a case made of a metal and ceramic composite. The advantage of such a composite is that is has properties of both metal and ceramic, like malleability of the former and scratch resistance of the latter. The cal. 758 automatic chronograph movement features a chronograph function indicator – the circular window on the dial changes colour if the chronograph is started, stopped or reset. Pictured here is the regular version, a Deep Sea Chronograph Vintage Cermet with faux aged Luminova is also available as a boutique exclusive. Next is the Reverso. Two years ago the Grande Reverso1931 met with great success and JLC has been building on that ever since. This year sees the addition of the Grande Reverso Ultra Thin Duoface. This can display two difference time zones on each of the Reverso faces, with the second time zone advanced by the button in the case. The Grande Reverso Ultra Thin Duoface maintains the vintage 1930s styling of its siblings, as well as the “Reverso” script on the dial, eschewing any JLC branding. Pictured here in steel, it is also available in rose gold.