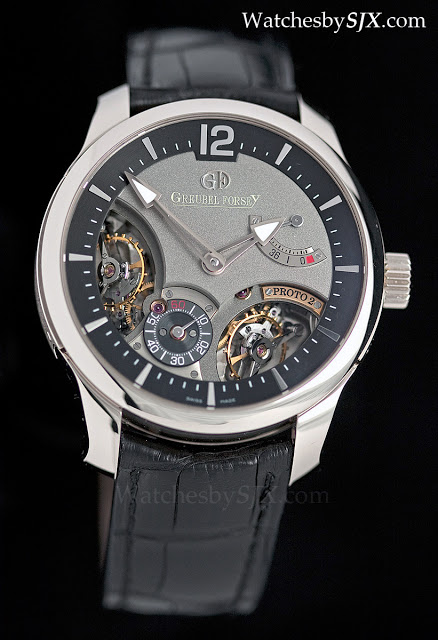 As is usual Greubel Forsey presented several beautifully conceived and finished timepieces. All of them are variations of existing movements, except for one. At SIHH GF unveiled the first timepiece from the brand that does not have a tourbillon.

Instead, the Double Balancier 35° has a pair of balance wheels, each inclined at 35 degrees. (This is the first officially launched GF watch with no tourbillon. GF made six watches with a similar concept for London retailer Marcus last year.)

Both oscillators are linked to a spherical differential, which averages out their individual rates. In between the twin exposed balance wheels is a constant seconds hand which displays the average of both balances. And at two o’clock is the 72 hour power reserve display. The reason for a 35 degree incline is that it allows to a larger diameter balance wheel to be used, which mean higher inertia and thus better timekeeping.

Visually the watch is typical GF; even though GF has no one iconic design to speak of, like the Reverso or Royal Oak, its watches are all distinctive in design and construction. The Double Balancier 35° is no different. At 43.5 mm it is quite large and hefty. The dial features a frosted finish that GF usually employs on movement bridges. This is a limited edition of six watches in white gold. Despite not being a tourbillon, it retails for a bit more than the Double Tourbillon 30°.

Another unusual watch from GF is the Double Tourbillon Technique in a black DLC coated titanium case with a stitched rubber strap; this same movement won the Concours de Chronométrie 2011. While the movement finish and construction is beautiful, I am not a fan of the aesthetic. The all-black look went out of fashion some time ago, in my opinion. It retains the striking blue titanium dial and sapphire chapter ring above the dial. The rose gold Contemporain is a limited edition of 33 pieces.

Likewise, the Quadruple Tourbillon Secret was also launched last year in a platinum case, it is now available in a rose gold case with a striking black dial. This is a limited edition of eight pieces. Last is the ultimate travel watch, the Greubel Forsey GMT, which is now available in red gold. The globe on the front works as a day and night indicator, and it is linked to the cities disc on the rear.