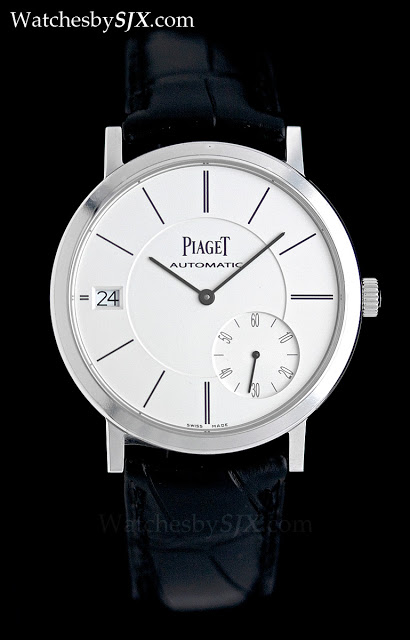 In 2013 Piaget continues to emphasise its in-house, ultra-thin movements. Personally I find an ultra-thin movement in itself not exceptionally fascinating, unless combined with complications or a high level of finishing, as Piaget does.

Building on the successful ultra-thin Altiplanos of previous years, the new Altiplano Date Ultra-Thin differs from the previous models in that it has a smaller, 40 mm case as well as a date display.  The small size makes makes it feel a bit more elegant than the 43 mm Altiplano, and the date display is useful, if unattractive on such a simple watch. Inside is the well finished 1205P, which is the world’s thinnest automatic movement with date at 3 mm high. The entire watch stands just 6.36 mm high. Slim as this and the other Piaget ultra-thin watches are, Jaeger-LeCoultre snatched the record for the slimmest wristwatch of any kind this year with its Master Ultra-Thin Jubilee. Previously only available in white gold, the Altiplano Ultra-Thin Skeleton is now in rose gold with ruthenium coated bridges. This 38 mm watch is a mere 5.34 mm high. The movement is skeletonised in a clean and simple style, as is the case with all Piaget skeleton or open-worked watches. Notably the rotor is platinum, but plated in rose gold to match the case. For those who want something more extravagant, the Altiplano is available in a wide range of gem set versions, including this 38 mm version in rose gold with diamonds. Originally launched in 2011, the Emperador Coussin Tourbillon Automatic is now available in white gold with a ceramic bezel. Visible through the sapphire dial is the ruthenium coated movement. And two apertures in the dial show the micro-rotor as well as the flying tourbillon. This kind of modern, black on white colour scheme for a watch like this is out of place, in my opinion. But it certainly adds a more contemporary feel to the watch. And finally the piece de resistance of the 2013 collection, the Emperador Coussin Ultra-Thin Minute Repeater, which was previewed here just before SIHH. At just 9.4 mm high, this is the thinnest minute repeater on the market. Housed in a 48 mm rose gold case, the 1290P calibre is basically the 1200P movement with the addition of a minute repeater module (as are many of Piaget’s other complications). With some clever engineering Piaget managed to compress the entire calibre to just 4.8 mm high, while still achieving a loud 64 dB chime. Piaget also says that this minute repeater is finished to a higher standard than any of its other calibres. Upon close inspection that is proved to be true – the movement is modern in style but exceptionally well finished. The steel racks of the repeater are especially beautifully done. Although it has to be said the finishing on the dial side, which has the minute repeater module, is slightly more lavish than that on the back. See the rest of my SIHH 2013 comprehensive reports. The brand reports listed in italics are still in progress. A. Lange & Söhne Audemars Piguet Cartier Greubel Forsey IWC Jaeger-LeCoultre Montblanc Panerai Parmigiani Piaget Richard Mille Roger Dubuis Vacheron Constantin Van Cleef & Arpels – SJX