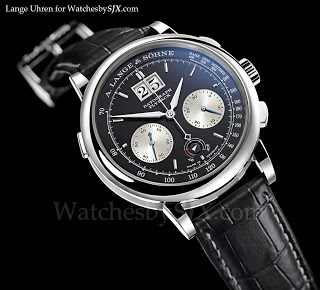 At SIHH 2012 Lange will unveil the Datograph Up and Down (“Auf/Ab” in German, ref. 405.035) in platinum, containing the improved L951.6 movement. When the Lange Datograph was unveiled in 1999 it caused quite a stir. In the absence of any comparables, the L951.1 movement of 1999 was stunning and brilliantly finished. But the Datograph remained unchanged, until now.

The new Datograph is an incremental change, rather than anything drastic. Fundamentally the calibre remains the same. The most evident changes are:

1. The case diameter is now 41 mm while the original was 39 mm. 2. Power reserve is 60 hours compared to 36 hours, thanks to a larger mainspring. 3. All the Roman numerals on the dials have been replaced with baton indices. 4. The new L951.6 calibre uses the in-house Lange balance wheel and hairspring first used for the Double Split. It appears Lange has maintained the original proportions of the Datograph so unlike the Grande Lange 1 this is not a clumsily enlarged model. I do like the Roman numerals on the original Datograph, so I’m not sure what to make of the new all baton dial. And while the power reserve isn’t unattractive, I wonder if it’s necessary. I suppose the primary motivation for that was to differentiate the watch substantively from the original Datograph. Live photos are available on Timezone courtesy of Peter Chong. I look forward to seeing this in Geneva next month. – SJX