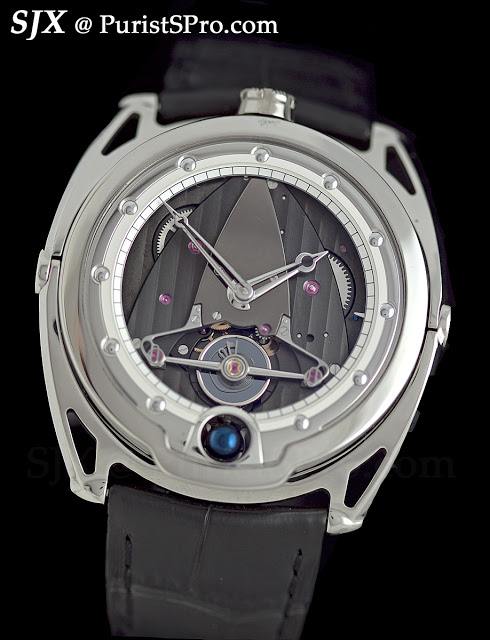 The Grand Prix d’Horlogerie de Genève has evolved – and improved – tremendously over the decades since it was launched. From a contest that was dominated by certain brands with predictable results it has become a noteworthy event. Last year it even awarded the Seiko Space Walk the Sports Watch Prize. Part of the evolution can be credited to jury member Bernard Cheong, the inimitable watch collector from Singapore. Results for the 2011 edition were just published. One can never agree with the entirety of a contest’s results but the jury did a good job here. I applaud most of the choices. For those interested, the rules of the contest. – SJX

The “Golden Hand” (watch of the year): De Bethune DB28

Though there are other worthy contenders it’s hard to disagree with this choice. De Bethune makes some spectacular looking watches with very interesting technology. The candidates in this category were pretty lacklustre. The interesting ones, like the Vuitton Spin Time and Bulgari Serpenti, are not new designs or ideas.

A novel watch that is not quite as expensive as one would expect. But there are lots of other strong contenders, Voutilainen’s Vingt-8 for instance, in this category. I would think the winning margin was pretty small here. The Frederic Jouvenot Helios or Eva Leube Ari would be other possibilities for the winner but the Urwerk is worthy as well. Several of the candidates in this category are blazingly ugly and the VC&A is delicate and charming, so why not?

The Opus 11 is the obvious choice in this category, especially since the Zenith is not a new idea. Sports Watch: TAG Heuer Mikrotimer Flying 1000 Mechanically this is the most interesting sports watch amongst the contenders so it deserves to win. Montblanc Star Worldtime GMT Automatic The entrants in this category are pretty uninteresting. Even Seiko, which should excel in this category with a Grand Seiko perhaps, instead chose to enter the e-ink display watch. I saw this Montblanc at SIHH 2011 and was thoroughly unimpressed by the design and execution.

Best Watchmaker: Vianney Halter Vianney certainly deserves a prize of some sort for his contribution to the aesthetics of wristwatches. Maybe shared with Jeff Barnes?