With the Grand Prix d’Horlogerie de Genève 2015 award ceremony just concluded, here are the winners, a list that includes widely predicted favourites and some surprising picks. The best known awards in watchmaking, the Grand Prix d’Horlogerie de Genève awards were just announced in the evening of October 29 in the Swiss city. Winners included stalwarts like Greubel Forsey, Tudor and Audemars Piguet, but also newcomers like Faberge. Independent watchmakers were well represented, with Antoine Preziuso taking two awards, while Habring2 took the prize for affordable watches. The full list follows:

Eight years in the making, this Vacheron Constantin is the most complicated watch ever, and the three watchmakers responsible for it shared the Special Jury Prize.

The entry-level tourbillon from Greubel Forsey took the “Golden Hand”, the top prize of the competition, perhaps proving less is more. A variant of Hublot’s signature men’s watch, the Broderie features lace embroidery on the bezel, dial and strap.

Conceived by movement specialist Agenhor (led by Jean-Marc Wiederrecht), the Peacock cleverly shows the time with the fan-like tail feathers of the peacock on the dial. A surprising complication from the recently revived name.

Voutilainen’s dual time zone version of his flagship chronometer wristwatch. It’s powered by the hand-wound movement developed by Voutilainen, and decorated with a high level of finishing typical of the brand.

A clean and simple chronograph that is the thinnest chronograph on the market. While record breaking, the movement is so similar in construction to Jaeger-LeCoultre’s workhorse chronograph calibre (both companies are part of luxury conglomerate Richemont) that its originality is uncertain. This was the start of a good night for Piaget, being just the first of its two prizes. Somewhat plain visually, the Ulysse Anchor Tourbillon nonetheless has an interesting escapement and tourbillon made almost entirely of silicon that is a true constant force escapement.

Distinguished by its custom-designed font, the Slim d’Hermes is the brand’s new flagship men’s watch. And the perpetual calendar has the extra cachet of being designed by Agenhor, the same complications maker also responsible for another prize winner, the Faberge Peacock. 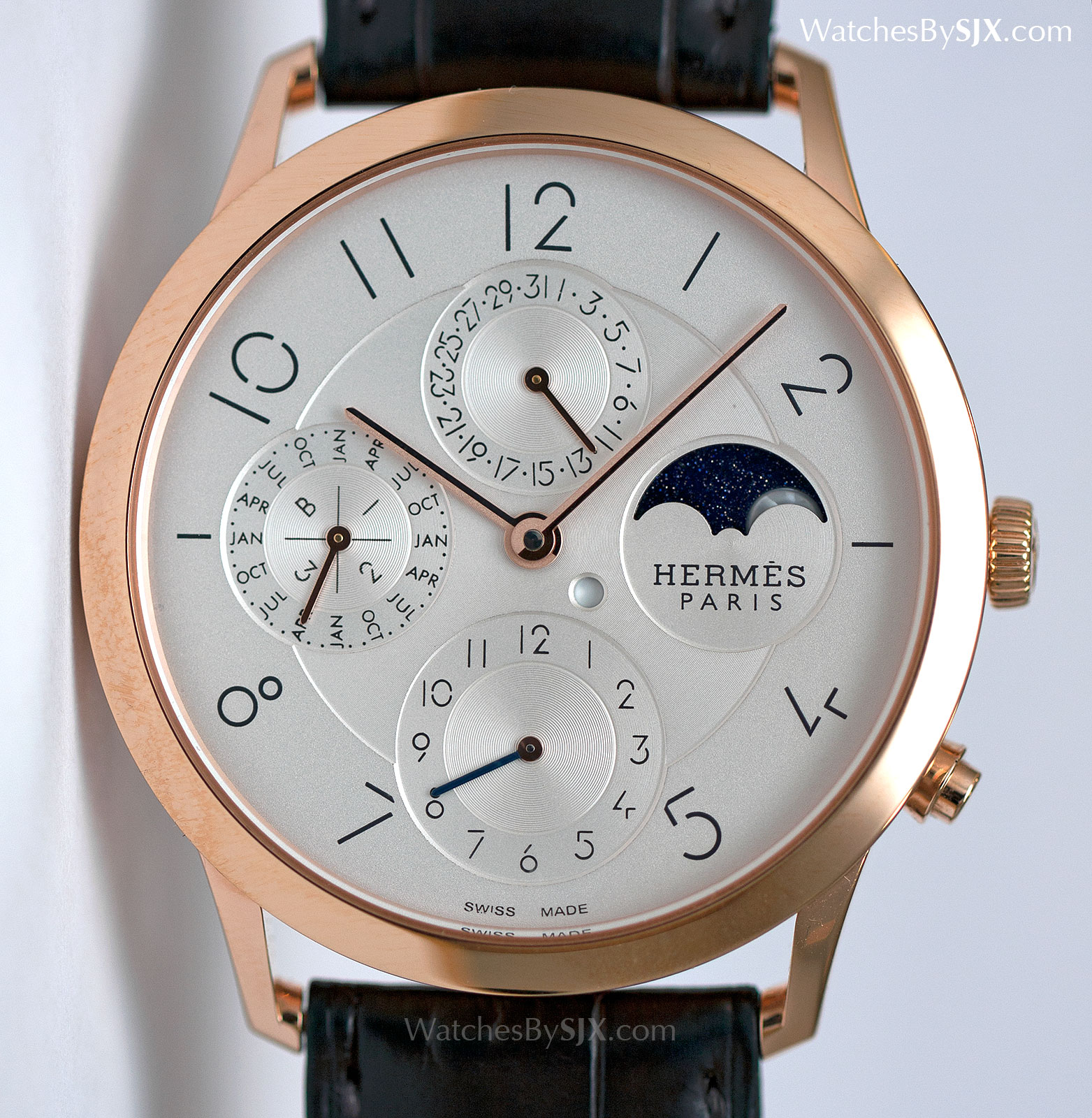 This is Girard-Perregaux’s latest flagship complication, featuring its trademark arrow-shaped gold bridges along with an exposed repeater mechanism on the dial.

Equipped with a tiny automaton in the form of a bird that sings, swivels and flaps its wings, The Charming Bird is both charming and exceptional.

A prize for affordable watches, the “Small Hand” was won by the Austrian watchmaker’s first wristwatch equipped with its new in-house movement.

Not a entirely a new model but rather equipped with the newly developed in-house movement. Nonetheless a solidly made watch. Edgy, cool and glamorous. Definitely one of the most striking jewelled watches of the year.

Featuring a dial made with an ancient Japanese technique of metalworking, this has a dial made of copper and gold lacquered for contrast. It’s the first time shakudo is used on a wristwatch.

A chunky watch with three tourbillons orbital linked by differentials, meaning each tourbillon spins on its own axis, while all three go around the dial. It won for both innovation as well as garnering the most votes from a public vote, a surprise result for a independent brand that is not widely known.

Open to watches that are remakes of vintage models, the Revival Prize went to the Piaget based on a creation from the 1970s. The second Piaget to win tonight, it’s a delicately formed cuff watch made of white gold wires with an opal face; striking in appearance yet pleasingly retro.

Given to a brand less than 10 years old, the prize went to the steel, cushion-shaped Laurent Ferrier. Almost plain looking, the Galet Square is best viewed from the back, where the gorgeous self-winding movement is visible.