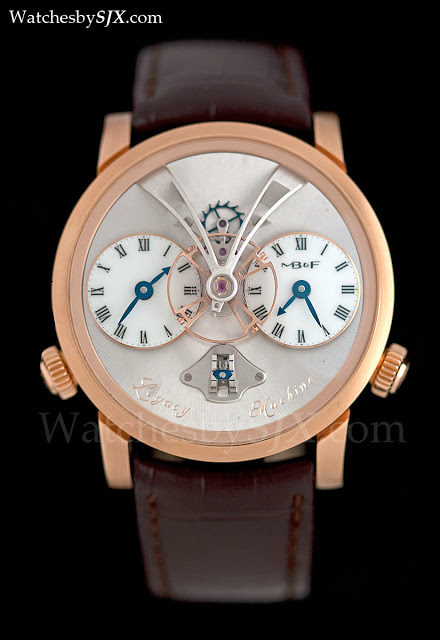 Max says if he were born in 1867 instead of 1967, the Legacy Machine is the watch he would have created. The LM1 is the Horological Machine of the 19th century.

Back then there was be no Grandizer and Star Wars, so the 19th century Max Busser would instead would turn to Jules Verne and the cast iron structures of the Industrial Revolution. Consequently many of the design elements on the LM 1 are reminiscent of pocket watches from that era. For instance the hand engraved lettering on the rhodium-plated plate on the front is like the movement engraving of vintage pocket watches. Conceptually the LM1 has similarities to the Horological Machines – the twin sub-dials and the symmetry. And a careful eye would spot the sole concession to the Grandizer aesthetic – the battleaxe logo on the crown. The LM1 is actually a functionally simple watch. It displays two independent time zones, each adjustable to the minute and set by the respective crown; the right crown also winds the watch. Each of the sub-dials is lacquer, though fired enamel would have been nice. The front is dominated by the pocket watch sized (14 mm diameter) balance wheel, beating at a leisurely 18,000 bph, fitted to an overcoil hairspring. This is held by a bridge that curves over the dial, necessitating a large, domed crystal that gives the watch an overall height of 16 mm. Turn the LM1 over and the splendid movement is revealed. Again the pocket watch inspiration is obvious in the shape and style of the bridges which are rhodium-plated Maillechort (German silver). The LM1 calibre reminds me of Lange movements – a homage to vintage movements made with modern technology resulting in a curious but attractive result. Finishing and decoration is absolutely top notch – most obvious in the anglage and polished chatons. This is performed by Charles-Louis Rochat SA, the “friend” responsible for finishing on all the machines, but with the supervision of Kari Voutilainen. The italicised text engraved on the movement is a further nod to its historical inspiration. Impeccable finishing aside, there are clues that the movement is a modern creation. The winding wheels look modern; wolf’s teeth would have been a nice touch. And the click spring for the barrel ratchet looks contemporary. Inevitably this will be compared with a Voutilainen. At the margin a Voutilainen (Observatoire or Vingt-8) is better finished. One example is how Kari finishes the teeth on the winding wheels to an obvious and high polish. Admittedly that is nit picking on an exceptionally finished movement. Case diameter is 44 mm and in either red or white gold. The latter reminds me of a Journe Resonance because of the grey dial. And in any case the rose gold works better with the vintage inspired look, it has more character and looks richer, in my opinion. The retail price in Singapore is SGD129,000 (about USD99,000) with delivery beginning next month. Swiss retail is CHF85,000.  Considering the finishing, I reckon that’s a reasonable price, relative to the competition in this segment. This will sell pretty well. Bravo to Max!