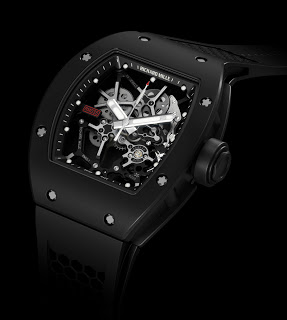 In the world of Richard Mille, price is inverse to weight. When launched the RM009 Felipe Massa and subsequent RM027 Rafael Nadal tourbillons were the lighest mechanical watches in the world. And now to satisfy those who want a weightless watch but are on a budget, Richard Mille gives us the RM035 Rafael Nadal.

Like the RM027 it was developed for Rafael Nadal. And like the RM027 it has a heavily skeletonised movement weighing only 4.3 g. The RMUL1 movement is manually wound and almost certainly from Vaucher. Interestingly, it is Chronofiable® certified which means it has a passed a thorough series of durability and reliability tests. It is the first RM to receive this certification; Chronofiable® is also part of the testing process of the Qualite Fleurier certification used by Chopard amongst others.  The case is a magnesium-aluminium alloy with a black ceramic oxide coating. A brilliantly cool looking watch. And it retails for the equivalent of an almost ridiculous USD95,000. But for those who are parsimonious, Casio offers a pair of G-Shocks with carbon fibre bands that weigh 47 g and cost about USD300.

I really wanted to pick up one of these when I was in Tokyo but the lettering on the band put me off. Casio needs to learn from Richard Mille: less is more.