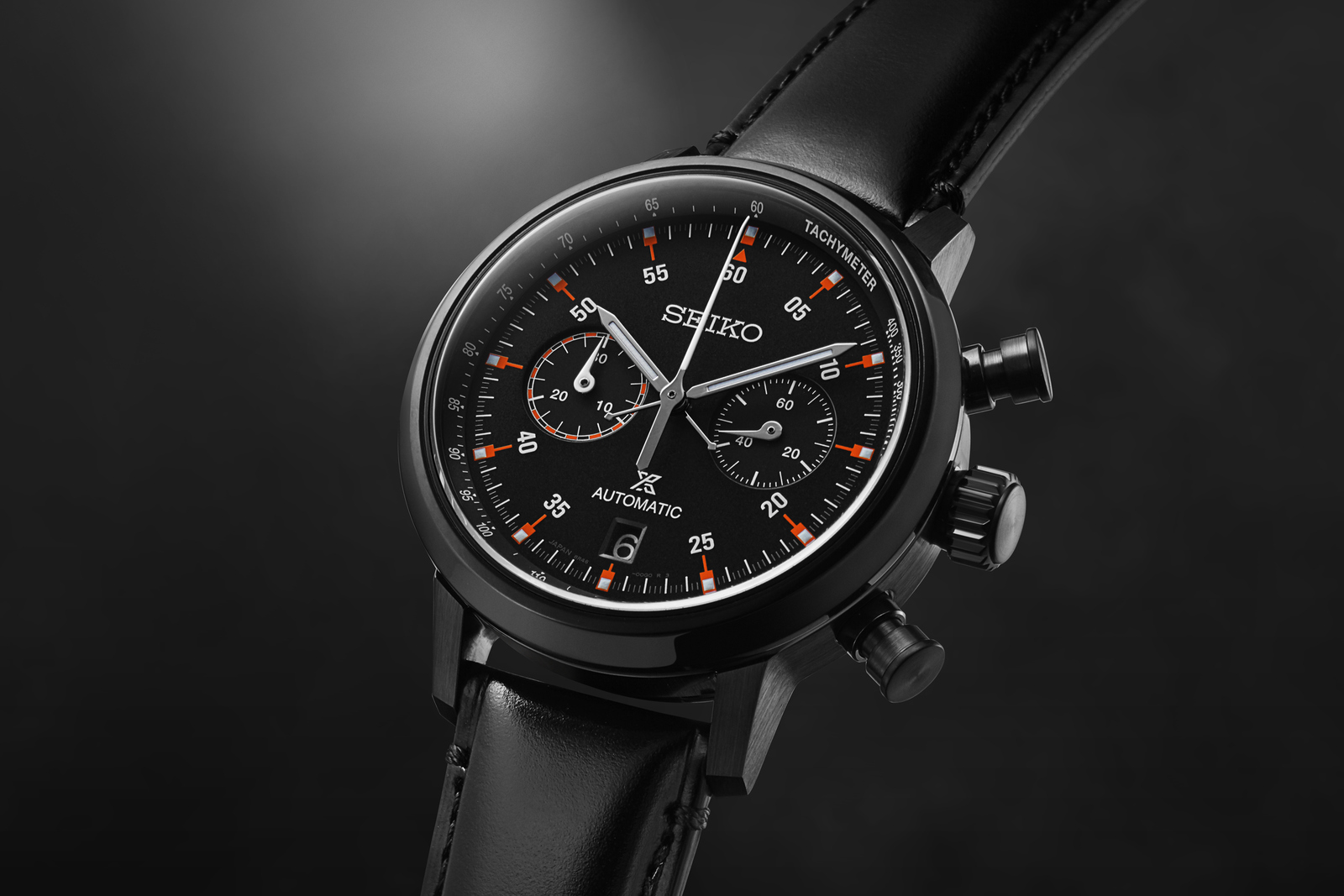 While Seiko was one of the first watchmakers in the world to launch an automatic chronograph with the ref. 6139 of 1969, the complication is not as synonymous with the brand as say, dive watches. That is due in part to the brand’s sparse offerings in terms of mid- to- high-end mechanical chronographs.

But that is slowly changing. After reviving the Speedtimer two years ago, Seiko has just released the latest iteration of the model with the Prospex Speedtimer SRQ045. Benefiting from an all-black makeover, the new Speedtimer is stylish yet functional homage to the stopwatches Seiko made for the 1972 Winter Olympics in Japan.

I wasn’t too impressed by the new Speedtimer initially as it appeared way too similar to the regular-production model. But when I looked closer, I changed my mind. While the new Speedmaster is admittedly one of many retro-styled chronographs introduced by Seiko in the past few years, it’s still an attractive watch.

The stark black-and-red livery of the new Speedtimer makes for a formidable racing chronograph; in fact it looks more like sports chronograph than the standard iterations of the model, which feel a bit flat in comparison. 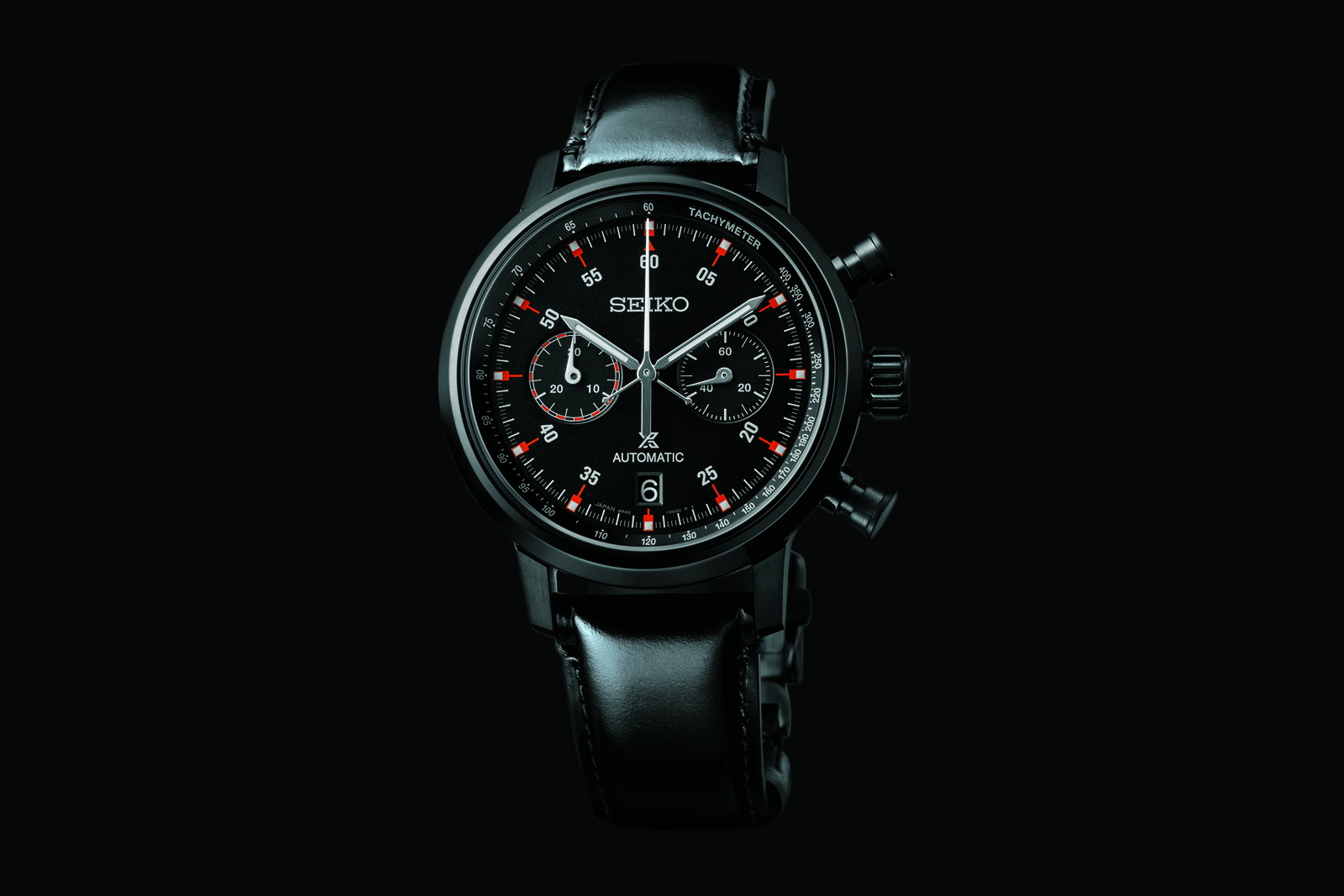 The attention to detail in design shows up here better than on other models. Examples of that include the scaled-down minute numerals on the dial and the pump-style pushers. I do wish, however, the seconds hand had a dash of red on its tip to complete the look.

That said, the new Speedtimer retains the same case (and cal. 8R46 movement) as its regular-production counterparts, which means the case is a chunky at over 15 mm high – it is a thick watch by any standard. Hopefully Seiko will eventually refine its chronograph movement to allow for a more compact case. 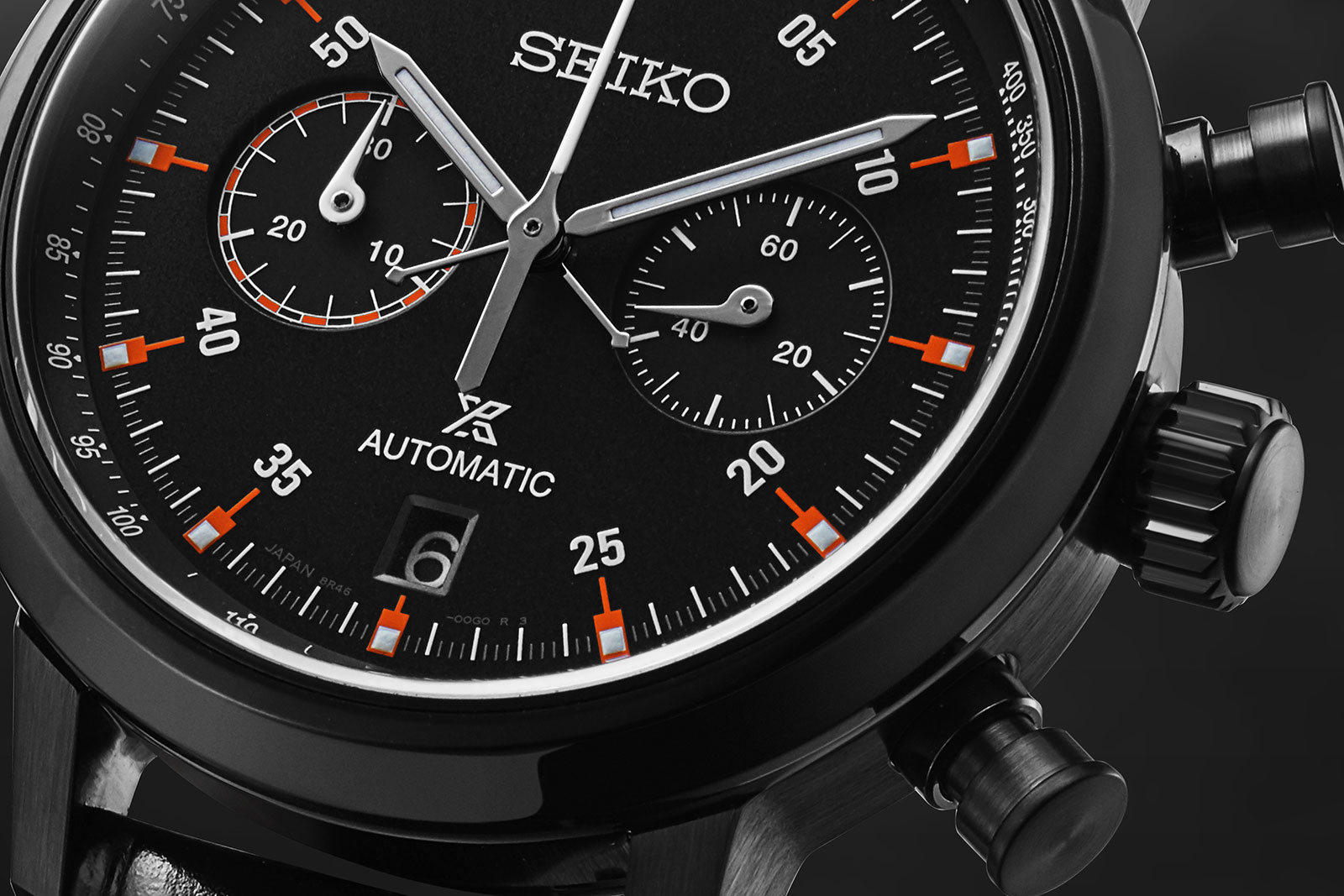 The new Speedtimer takes inspiration from the first Seiko stopwatch designed for winter sports. At the 1972 Winter Olympics, Seiko was appointed official timekeeper, so the brand set about developing a watch that would be legible during dark and frigid winter months. The result was a 1/10th-of-a-second stopwatch with a high-contrast black dial featuring the seconds scale highlighted in red. 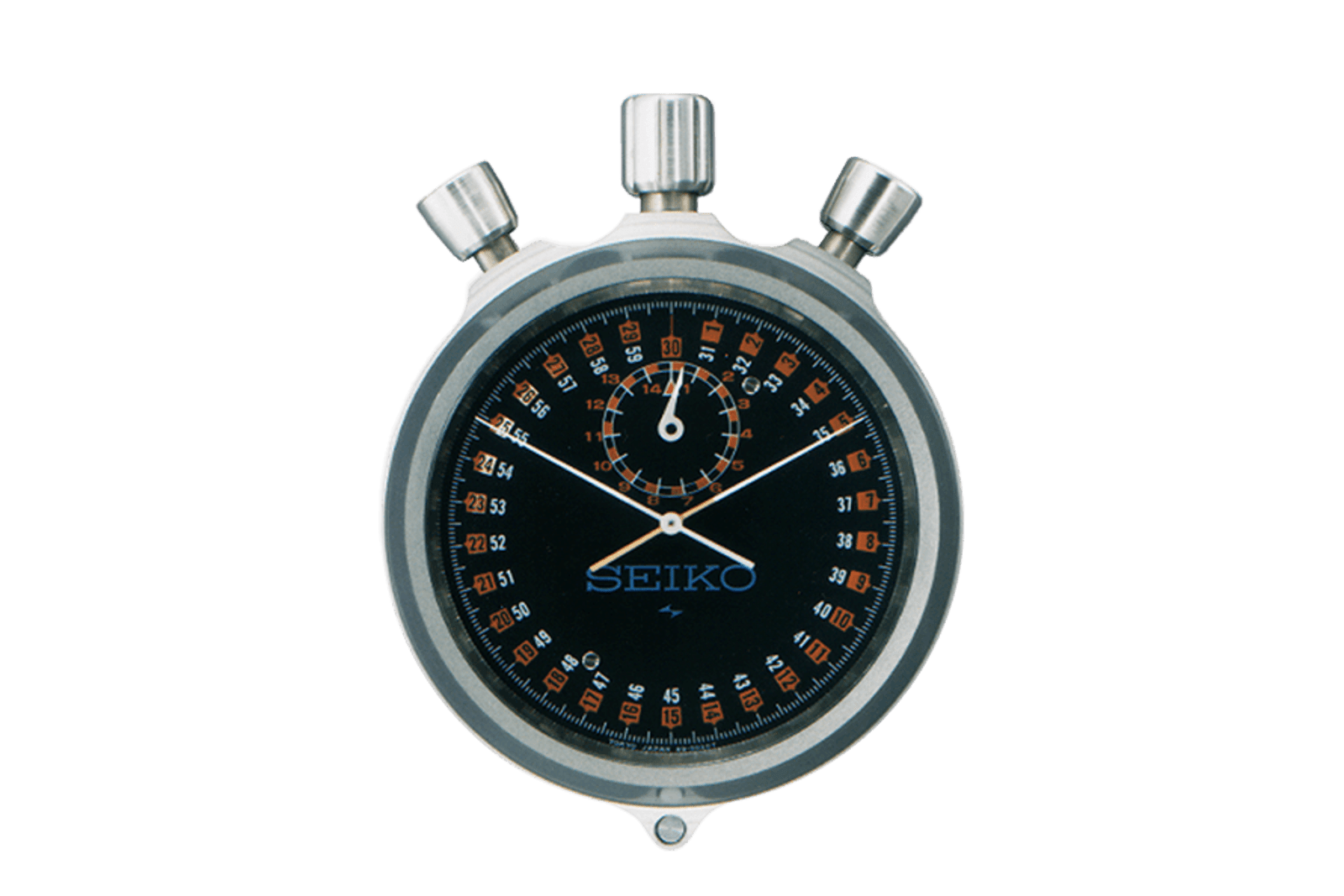 An example of the stopwatch made for the 1972 Winter Olympics. Image – Seiko

This was the model for the new Speedtimer, which reproduces the dial style and even the sub-dial hands but adds a tachymeter scale to the periphery of the dial.

The case is identical to the standard models – round, steel, and measuring 42.5 mm by 15.1 mm. But unlike the regular models that have a preserve the natural steel finish, this case has a black coating that boosts scratch resistance.

The movement is still the cal. 8R48, a two-counter mechanical chronograph movement featuring a vertical clutch and column wheel. A notable feature of the movement is a two-finger hammer that resets both chronograph hands in sync every time. 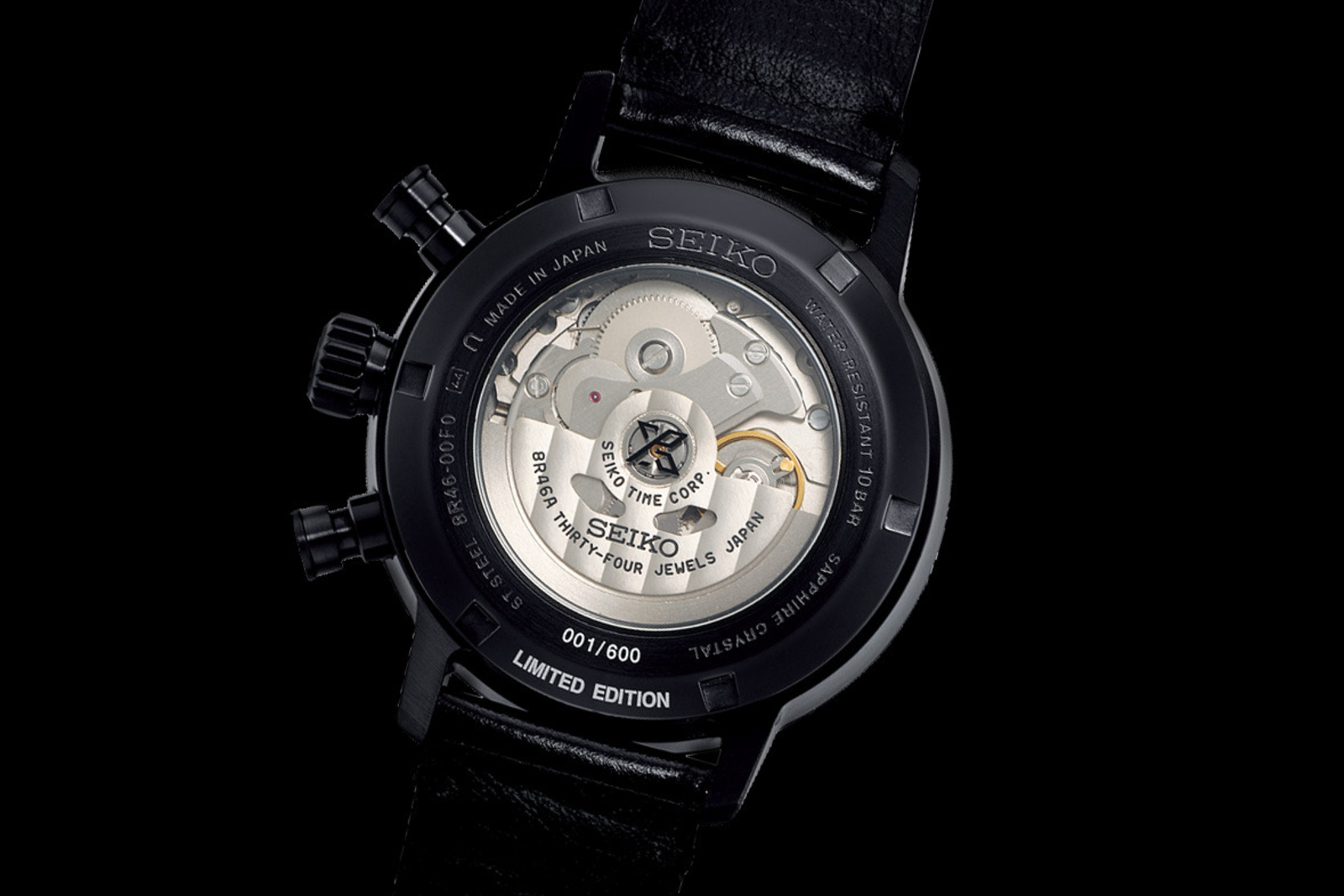