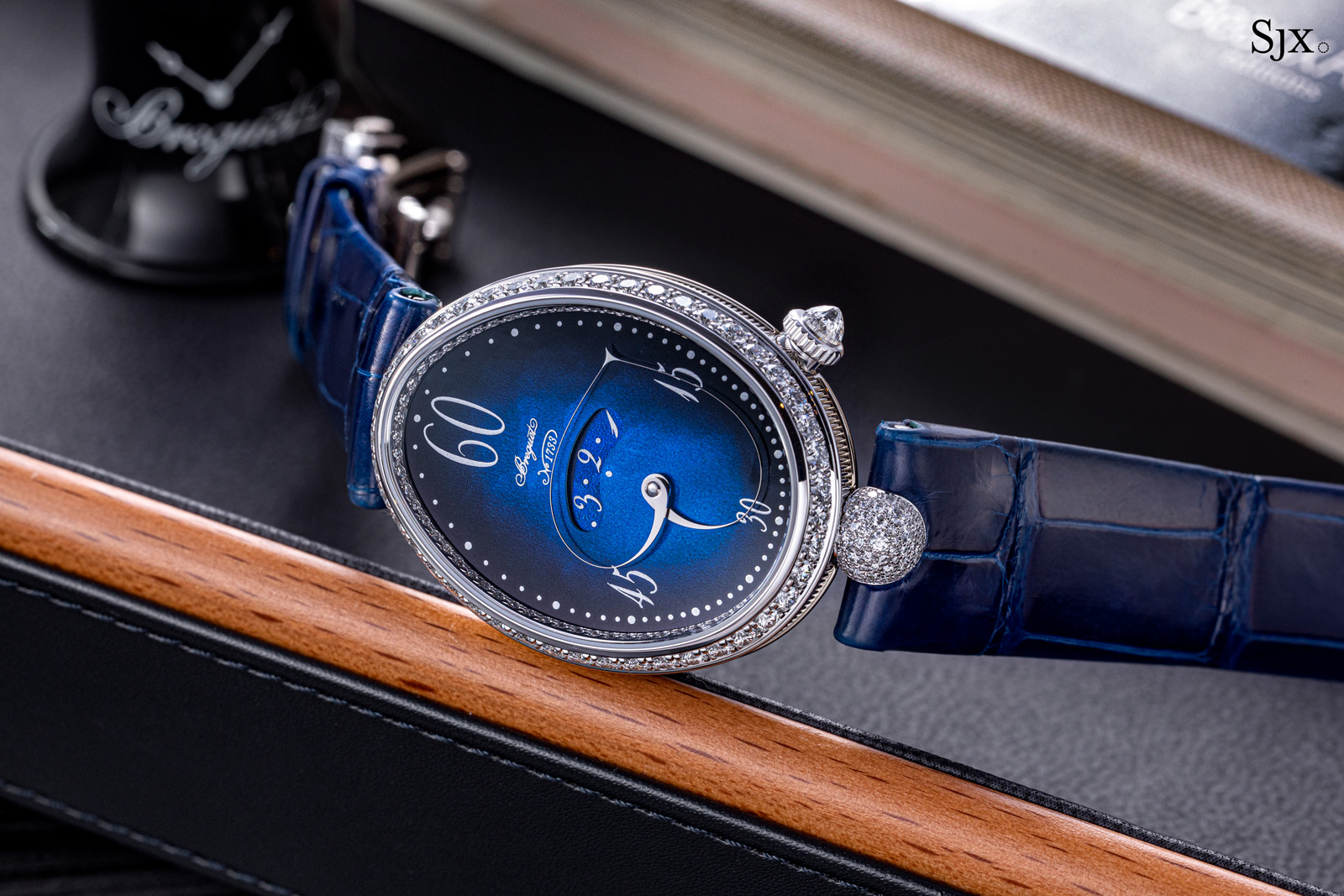 Even though Breguet is not a name that instantly comes to mind when it comes to ladies’ watches, the brand makes one of the most distinctive female watches on the market today. Late last year Breguet debuted perhaps its most ladies watch in some time: the Reine de Naples 9835 and 9838 that both possess a quirky yet graceful complication inspired by “expanding hands” pocket watches from the 18th century.

Immediately recognisable thanks to its distinctive egg-shaped case, the Reine de Naples was inspired by similarly-ovoid bracelet watch delivered in 1812 to Caroline Bonaparte, Queen of Naples and the younger sister of Napoleon. Reine de Naples – literally “Queen of Naples” – remains the brand’s signature watch for ladies, though the line-up has grown to encompass many iterations over the years. Admittedly, the models are numerous enough that few leave a lasting impression, but the “expanding hands” allow the new duo to easily stand out.

I was impressed when I first laid eyes on the new Reine de Naples. Neither is a typical ladies’ timepieces that lazily relies only on a bejewelled case to stand out. Both models have a striking, elegant aesthetic that’s slightly more modern than expected from Breguet but still possessed of enough intricate detail.

Though seemingly simple at the glance, the new Reine de Naples has a clever and unusual hour display with “expanding hands”. The simplicity of the time display combined with the novel mechanics are the highlight of the watch. I had seen this complication in old pocket watches, though I still needed to learn how these timepieces operate (which turns out to be less complex than expected but still clever). 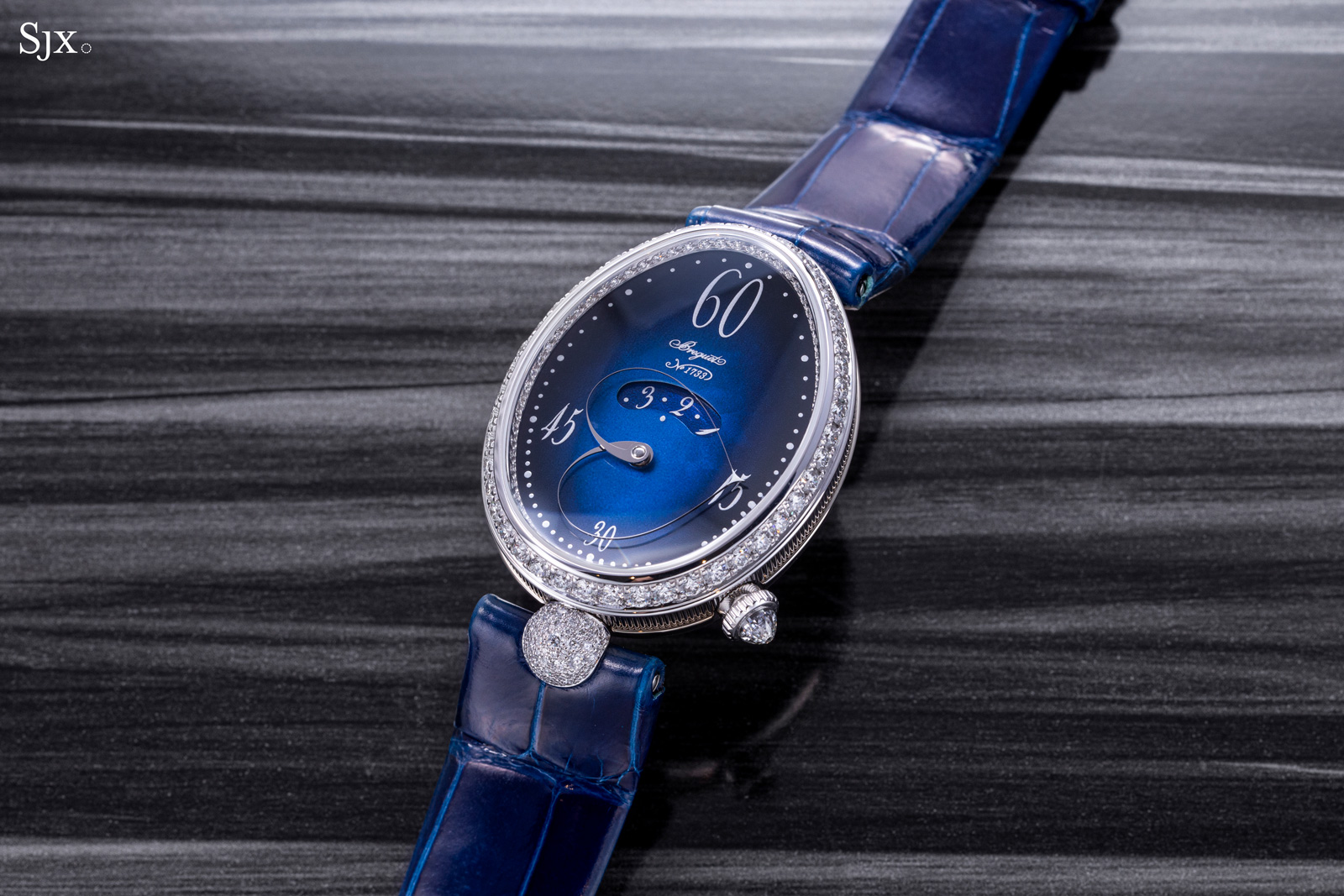 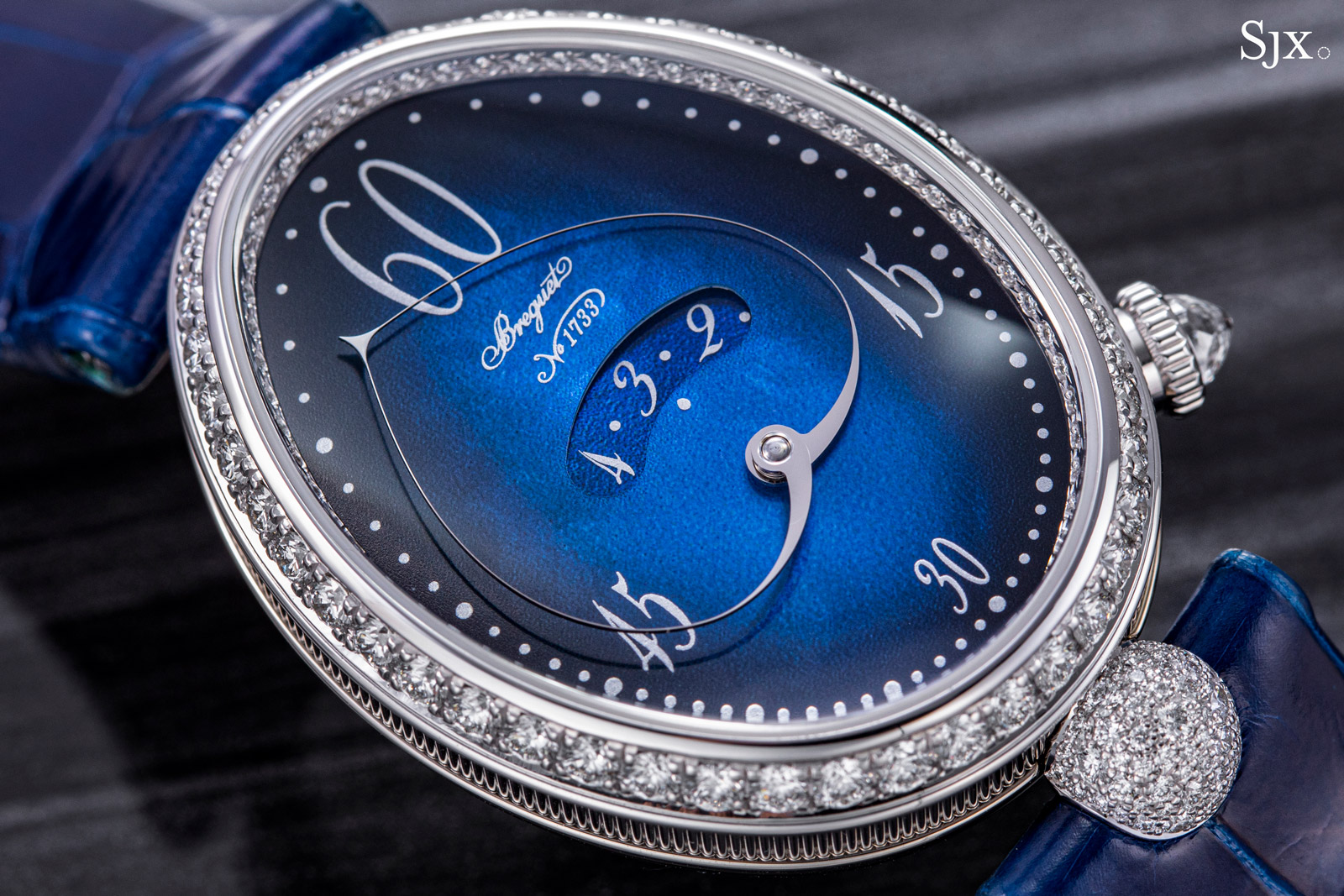 The novelty of the complication makes it appealing enough that I hope it will be found in more regular production models, perhaps ones without gemstones on the case for a more low-key appearance that would have a broader audience. And maybe even a larger size and different format for men, though I concede that might be too similar to something Parmigiani did in the past, and more pertinently a men’s version feels like something Breguet would never do. 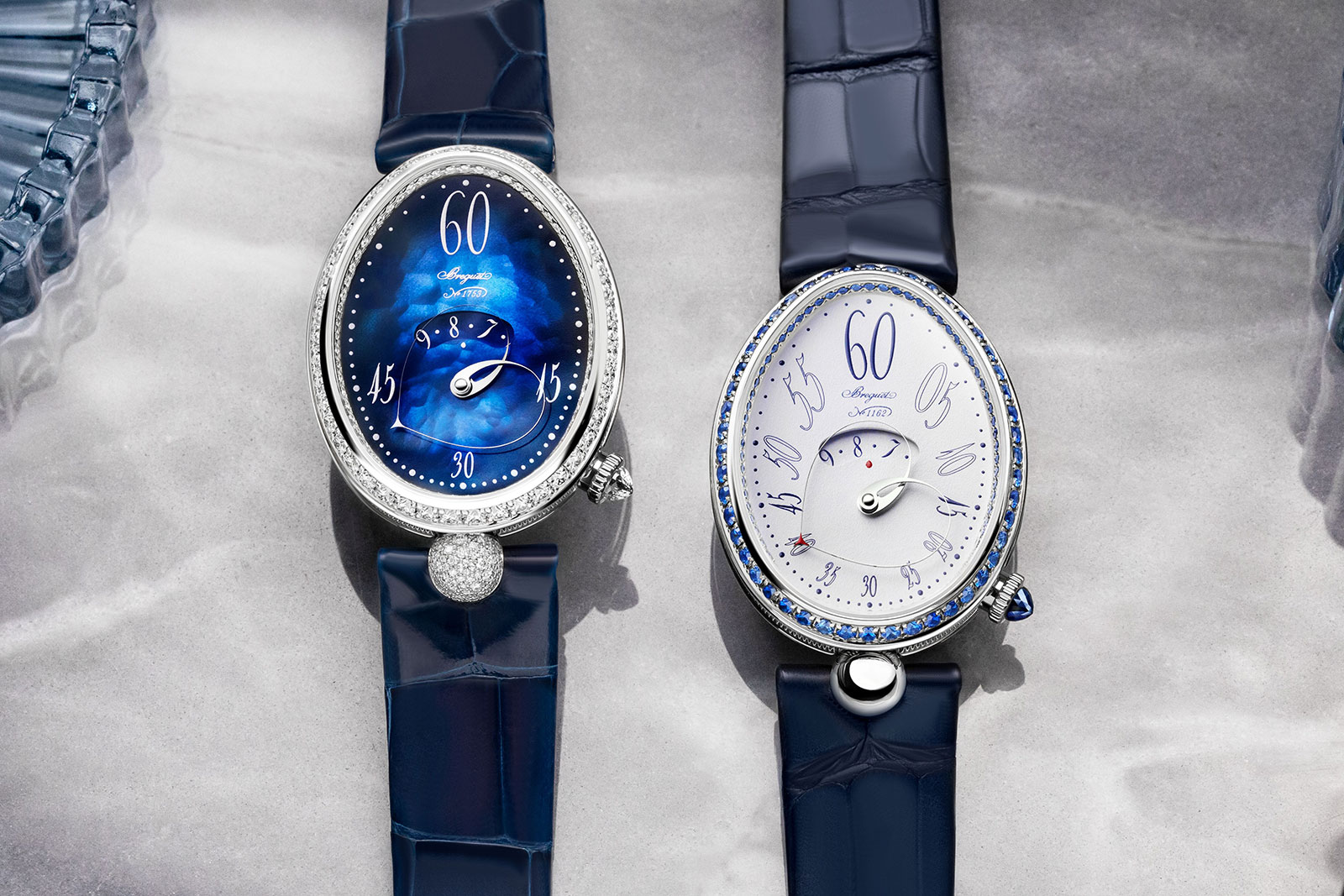 If the new duo look familiar, that’s because the “expanding hands” complication made its debut in the Reine de Naples Cœur 9825, a limited edition of just 28 watches made for Valentine’s Day last year. Now the concept returns in a serial-production timepiece, along with one more limited edition, making this appealingly peculiar complication a bit more mainstream.

In my opinion, both of the new models are an improvement over the Valentine’s Day edition, which had hearts for the five-minute markers along with a red-and-cream palette, making it a bit too cutesy for a sophisticated watch.

The new models replace the hearts with traditional dot indices that are subtle enough not to distract from the design. But the new pair retain the calligraphic, Breguet-esque numerals that give the dial a more artistic feel.

Though Breguet launched the “expanding hands” complication last year, it is hardly a modern invention. Its roots lie in English pocket watches created primarily for the Chinese market in the 18th century. The complication is most closely associated with William Anthony (1765-1844), an English watchmaker who made exquisitely elaborate pocket watches with this complication. His creations had fancy hands and an oval-shaped case, often decorated with pearls and enamel.

The “expanding hands” was probably inspired by the pantograph, the tool commonly used to copy and scale line drawings. In a wristwatch, the concept comprises two articulated arms, both incorporating several segments linked by hinges, allowing the segments to extend and retract as the hands revolve around the central axis.

The hands are powered by a novel differential-and-cam mechanism hidden under the dial. It causes the hands to expand and contract to trace the outline of the ovoid case. Parmigiani would be the first to reinterpret this complication in contemporary watchmaking with its Ovale Pantographe released in 2015. 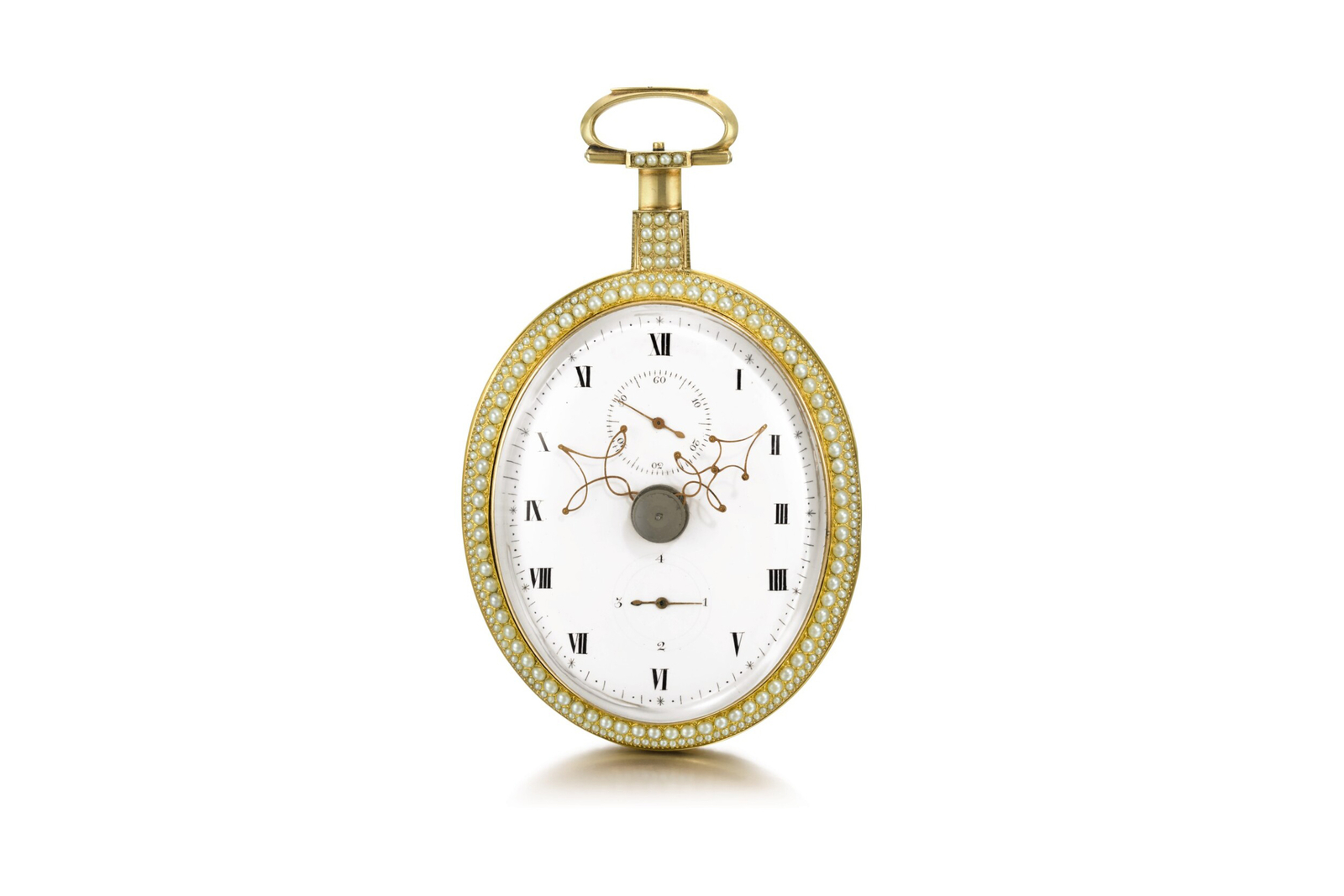 An “expanding hands” pocket watch, circa 1800, made by William Anthony for the Chinese market. Image – Sotheby’s

Breguet has redesigned and refined the complication, bringing its original distinct style to this whimsical complication. As with the earlier Cœur 9825, the hours are displayed with a disc visible through a window at the centre of the dial, while the heart-shaped hand indicates the minutes.

The complication is all about the heart-shaped minute hand made up of two curved segments that mirror each other. As the hand traverses across the dial, the heart-shaped hand expands to stretch out at 12 o’clock, where it is farthest from the edge of the dial, and then shrinks as it approaches six o’clock. 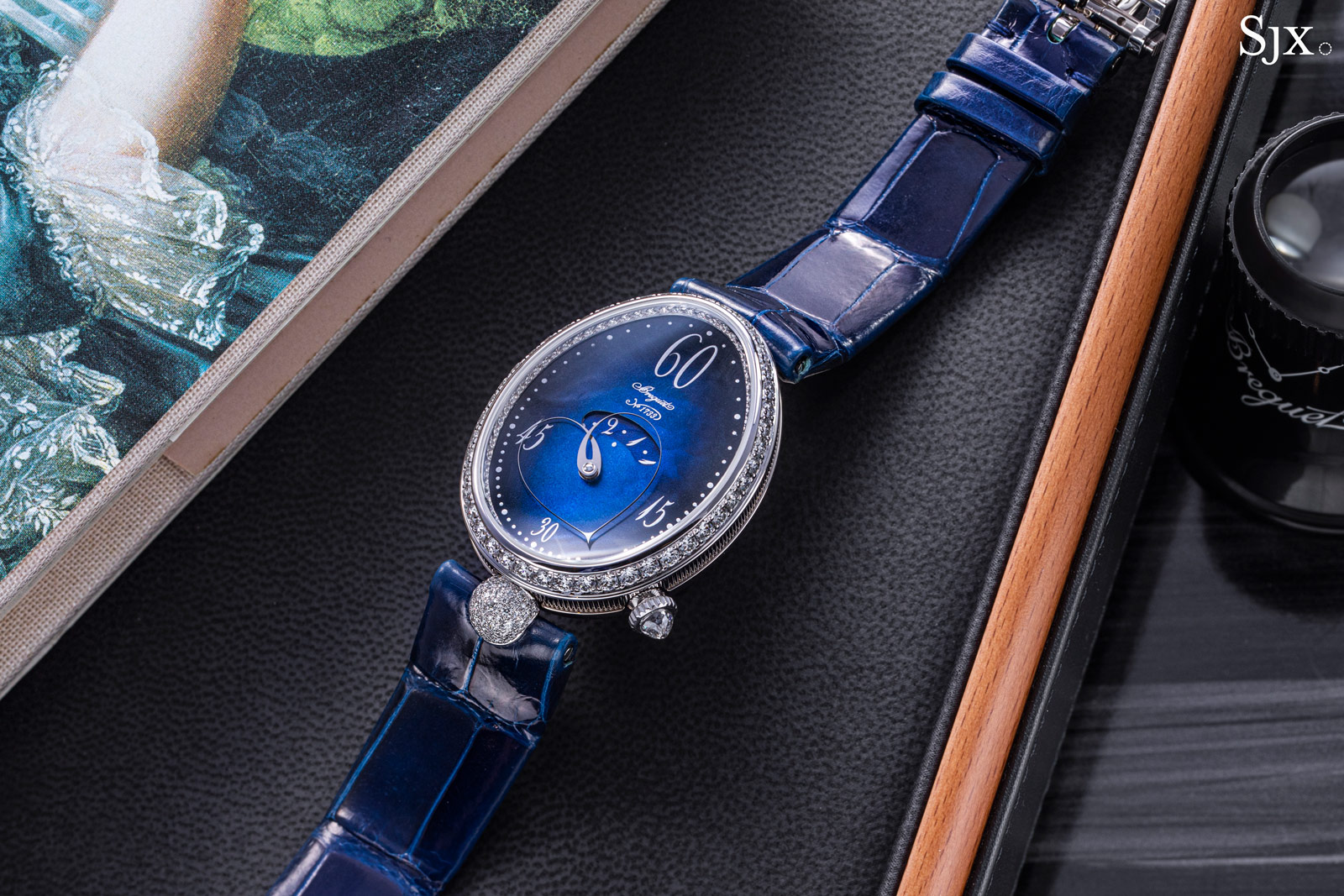 In order to do it, each half of the minute hand expands and contracts at different rates, requiring a special oval cam beneath the dial that controls each half of the heart-shaped hand, varying the motion of each segment so that hand it expands or contracts as necessary.

Only along the lower third of the dial – where the hand is closest to the edge – do both segments move at the same pace, resulting in the heart-shaped hand moving in a more conventional manner. 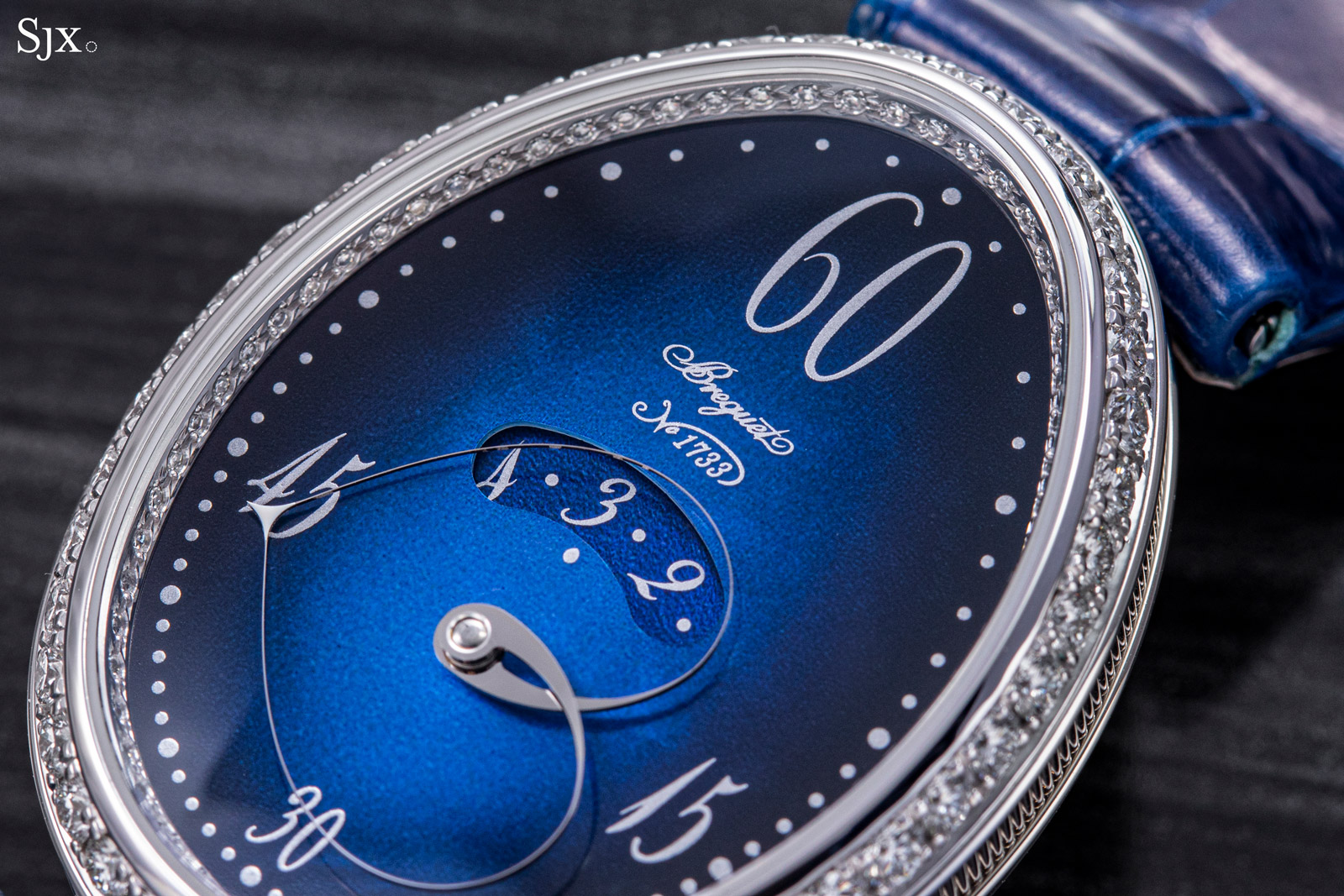 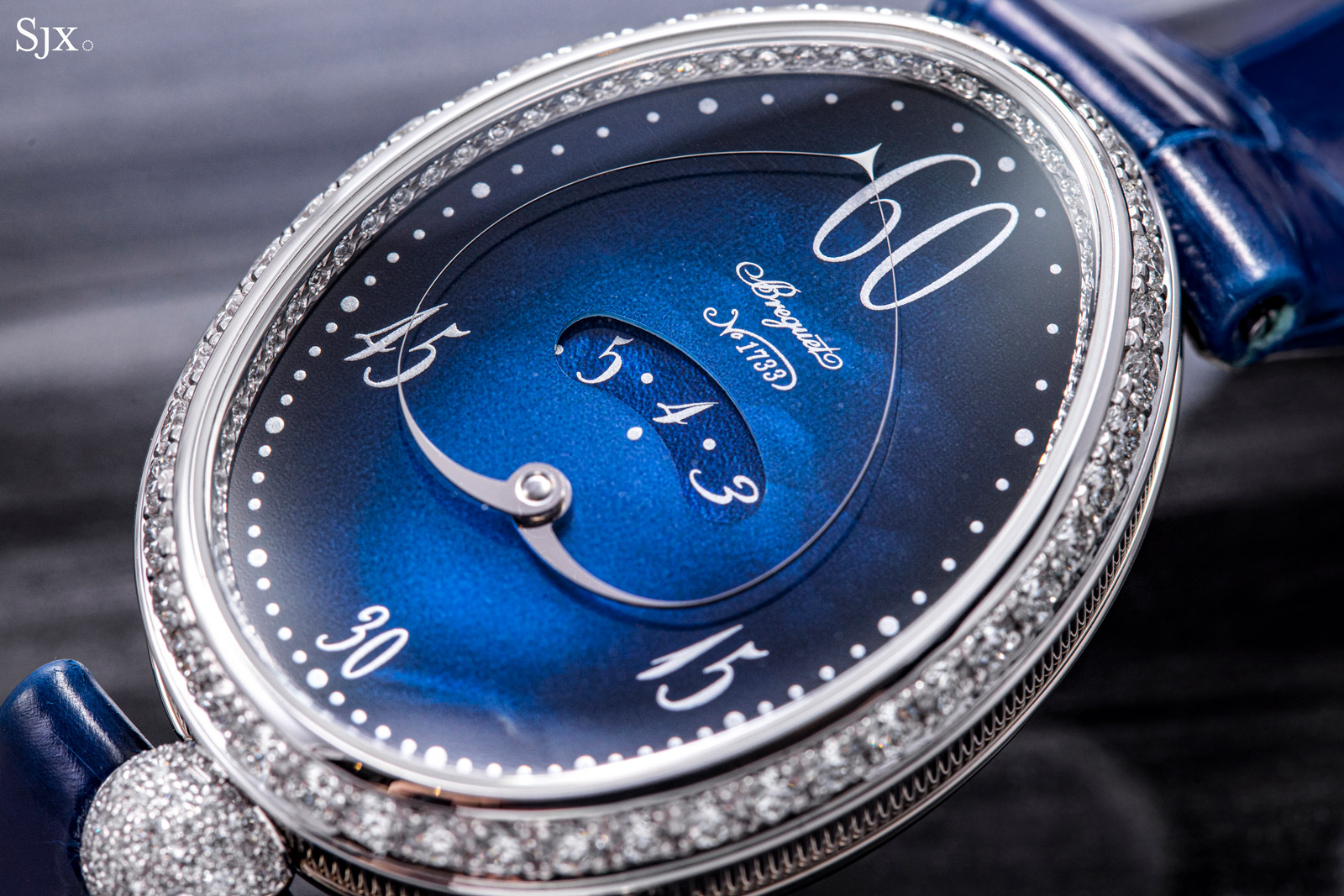 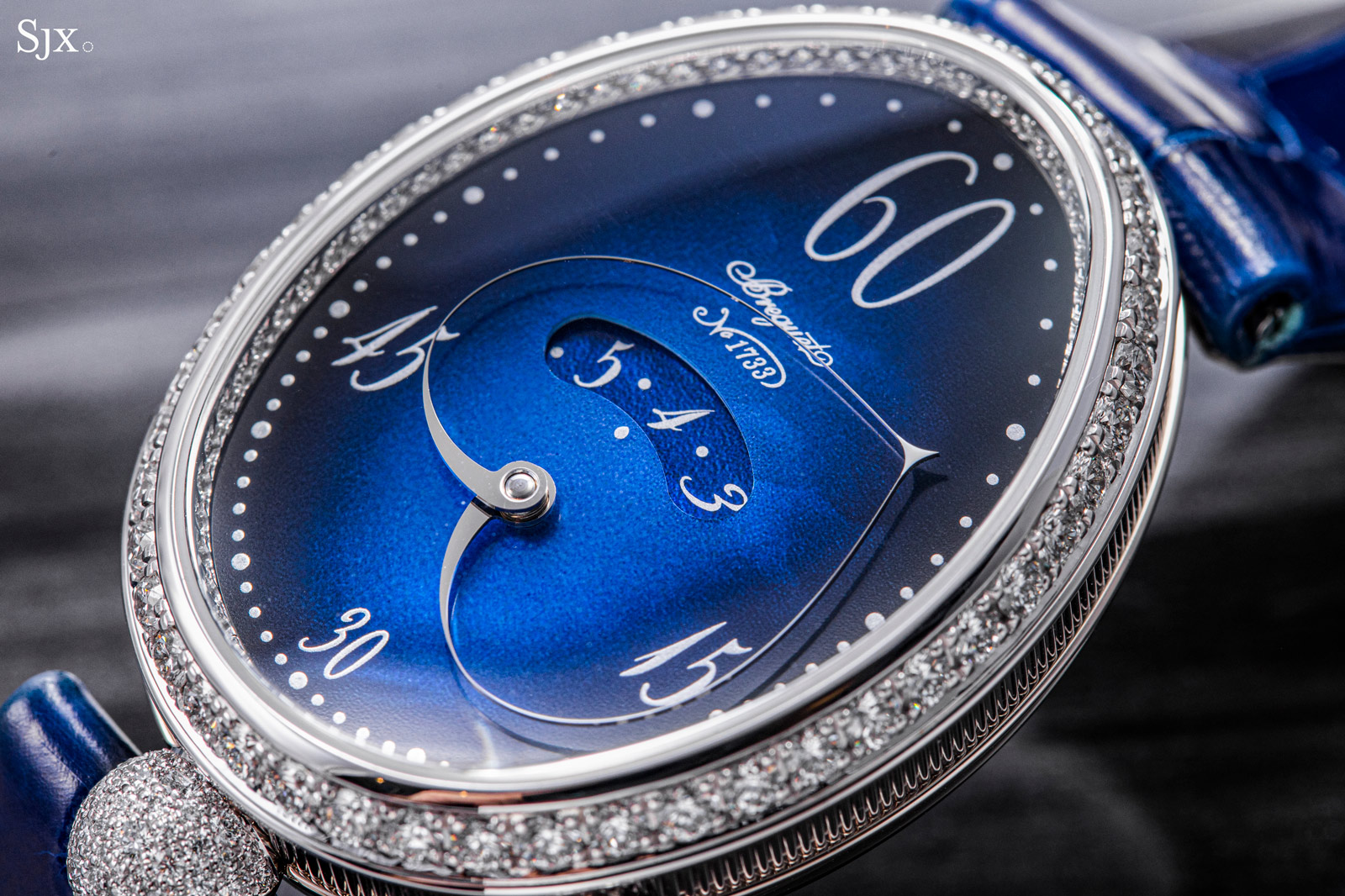 The case design takes cues from the rest of Reine de Naples collection. Both models are essentially identical, but decorated differently. They share an ovoid case in 18k white gold with the signature fluting on its flanks. It retains the exact same dimensions as the Cœur 9825, measuring a compact 28.45 mm in diameter, while the case is 36.5 mm by long. And as is traditional for the Reine de Naples, the crown is at four o’clock. 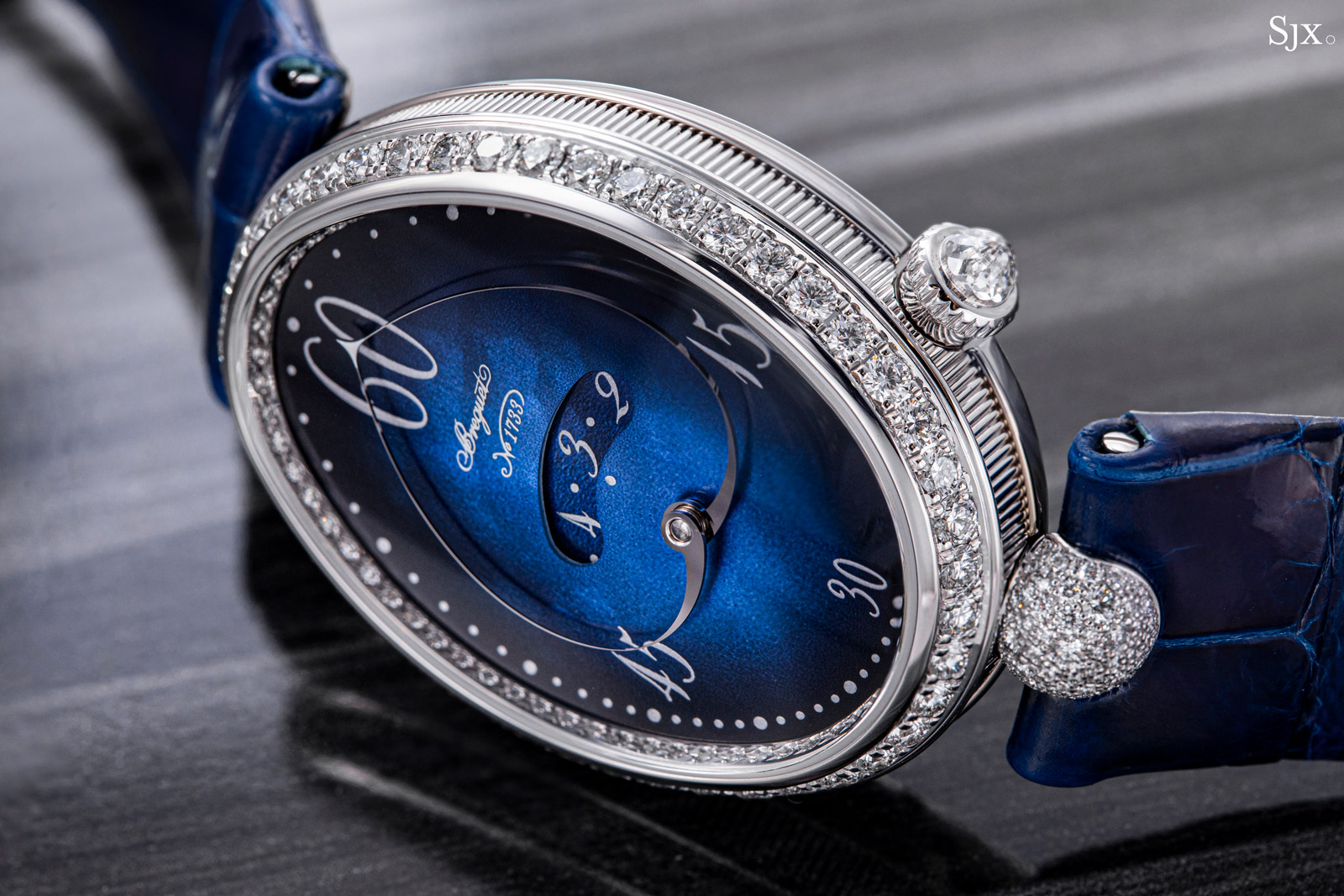 Though the case is sized very much like a ladies’ watch, it is somewhat thick relative to length and width. At just under 11 mm high, it sits somewhat tall on the wrist, though that is no doubt a consequence of the movement, which has additional height due to the module that powers the “expanding hands”. The main difference between the two models lies in the dials and gemstones on the case. The 9835 has a mother-of-pearl dial that’s been lacquered to give it a graduated, deep blue finish, while its bezel, flange and lugs are set with 161 diamonds along with a briolette-cut diamond on its crown.

The dial on the 9835 is devoid of typical hour and instead opts for the oversized minute numerals at the quarters. Printed in granular silver lacquer, the dial markings match the colours of the watch perfectly.

The 9838, on the other hand, has a matte, white lacquered dial that is gently contrasted by blue sapphires on its bezel and flange. Its dial is almost surrealist with its extra-large Arabic numerals that seem to expand and contract in turn, echoing the minute hand. In fact, the dial brings to mind 1920s form watches with “exploding” numerals. 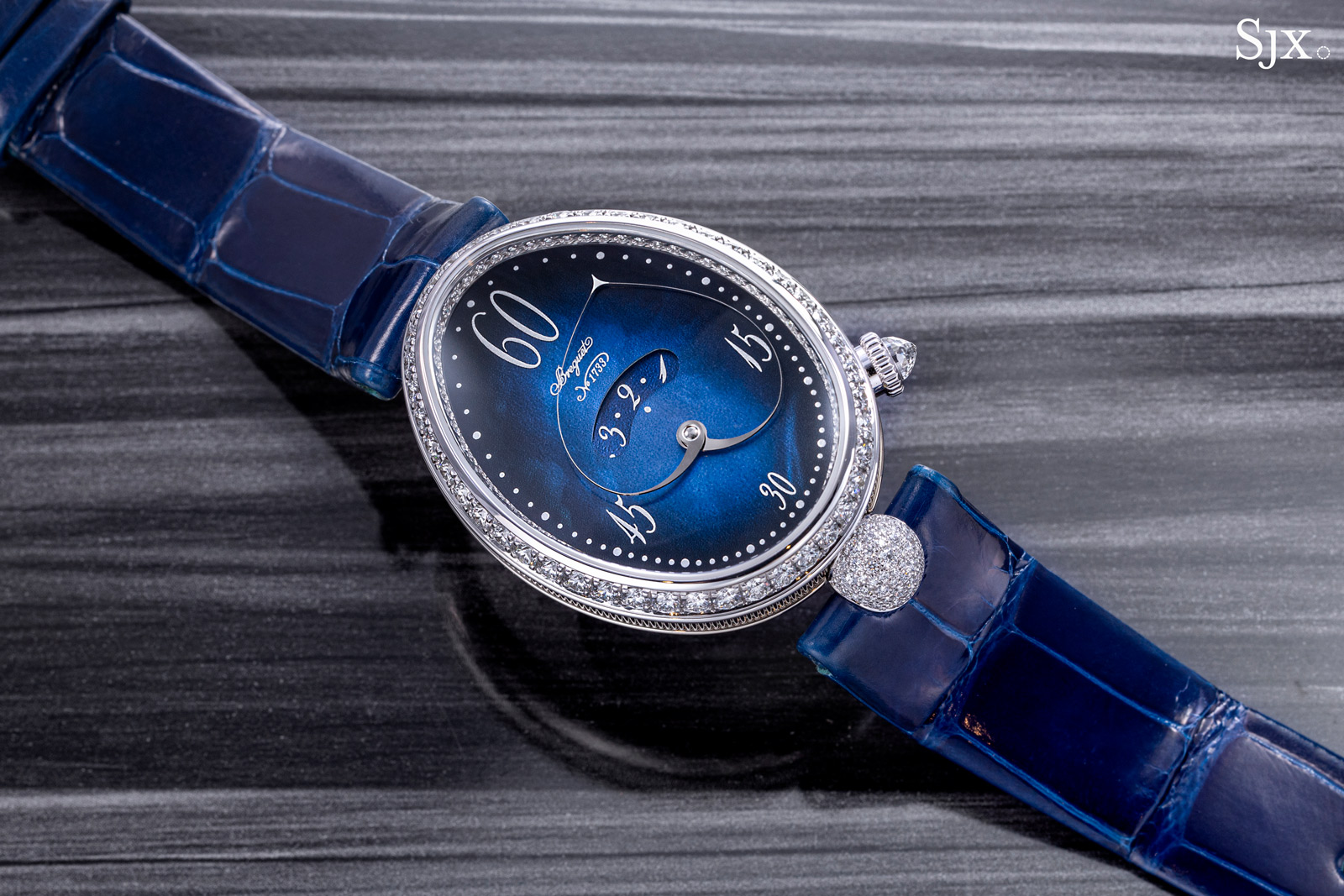 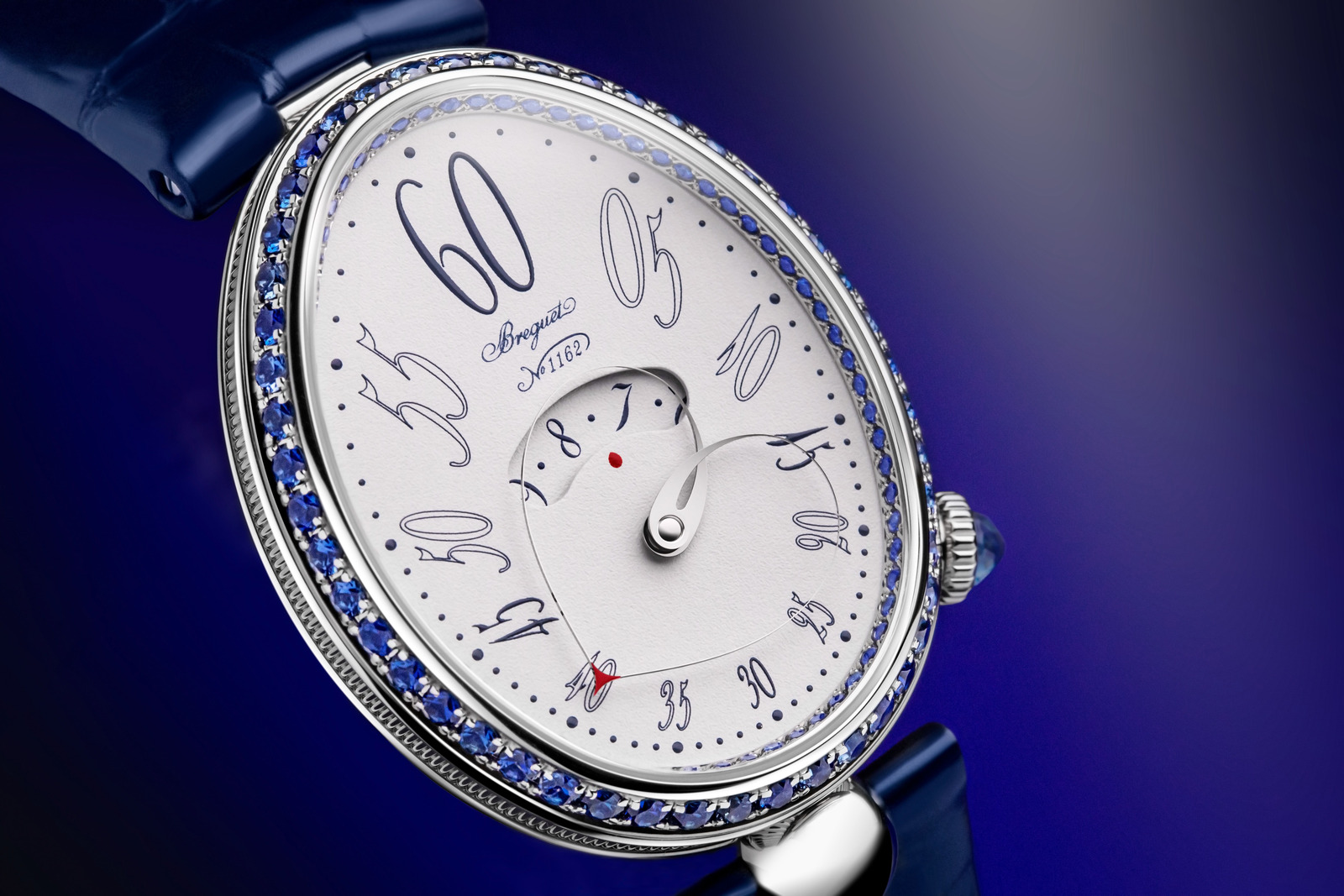 The Reine de Naples 9838 with its white-lacquered dial. Image – Breguet

The “expanding hands” complication is made up of a module on top of an automatic base movement. Collectively they are known as the cal. 78A0. The decoration is similar to that of other Breguet movements, namely industrial-artisanal. In other words, the finishing is mostly done by machine – but done neatly and done well – with a few finishing touches by hand. And it’s dressed up with an engine-turned platinum rotor.

Like most contemporary Breguet movements, the base movement is high tech for a mechanical movement, featuring a silicon hairspring and escape wheel. Because of its compact size, it has a relatively short power reserve of 40 hours. 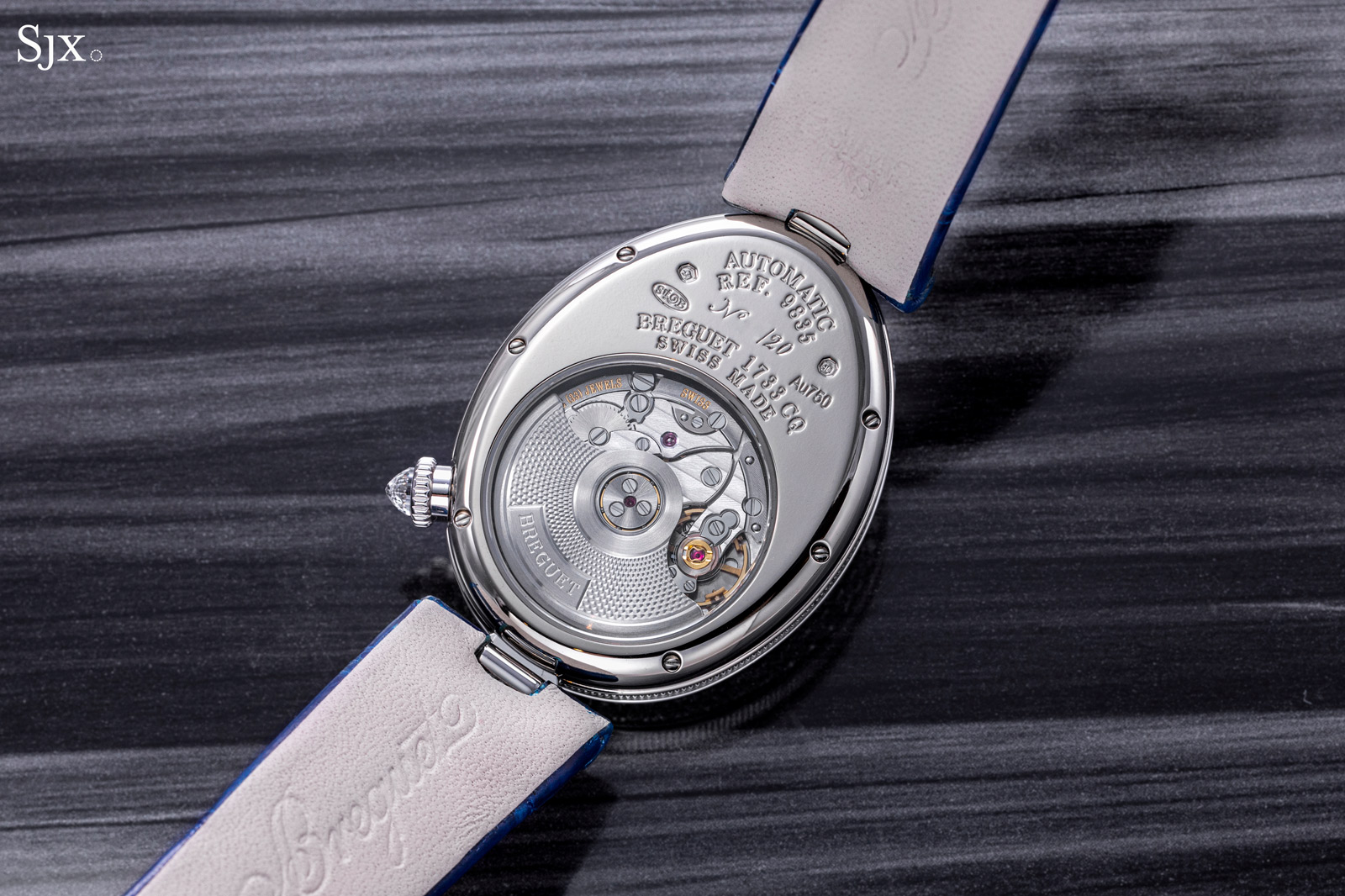 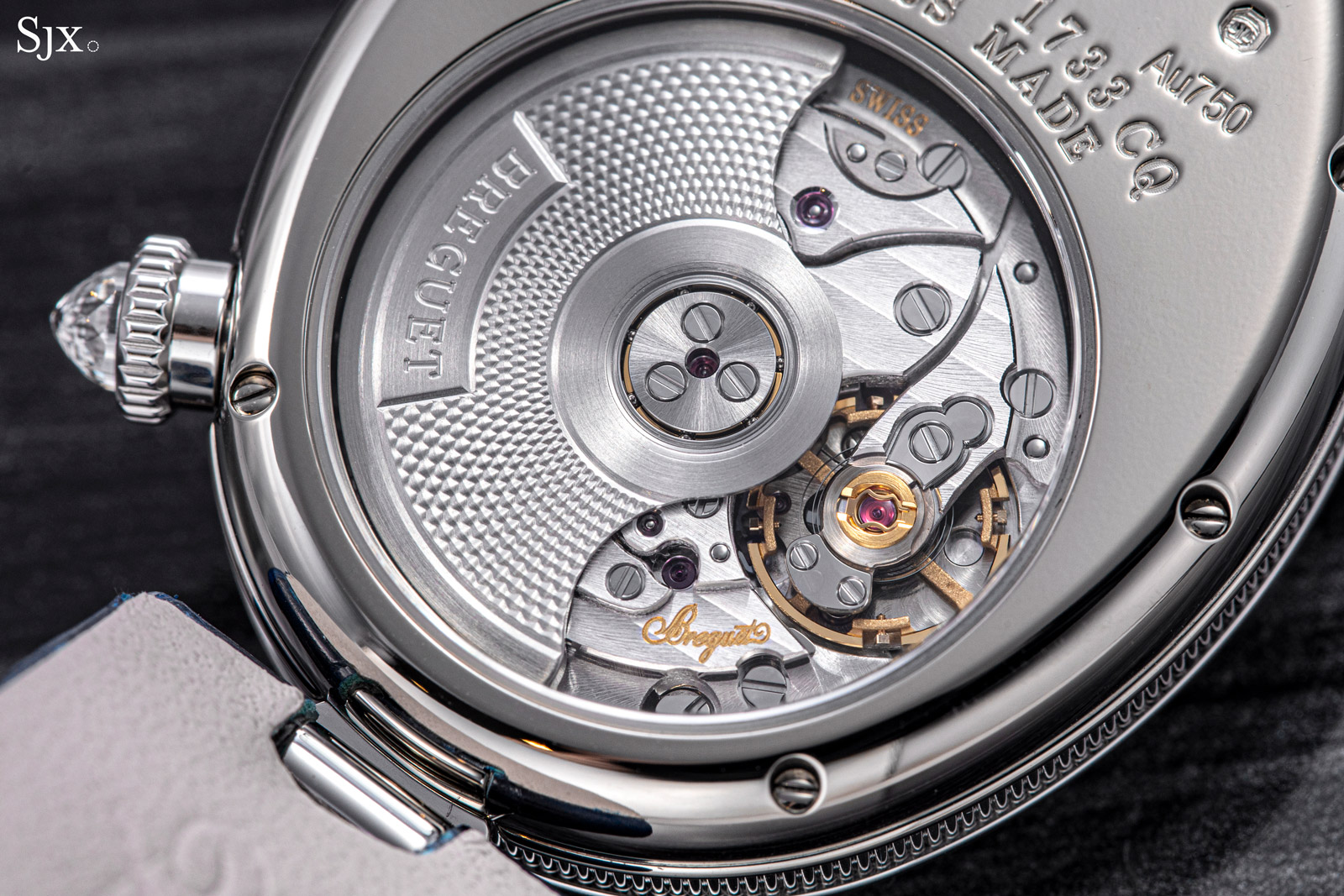 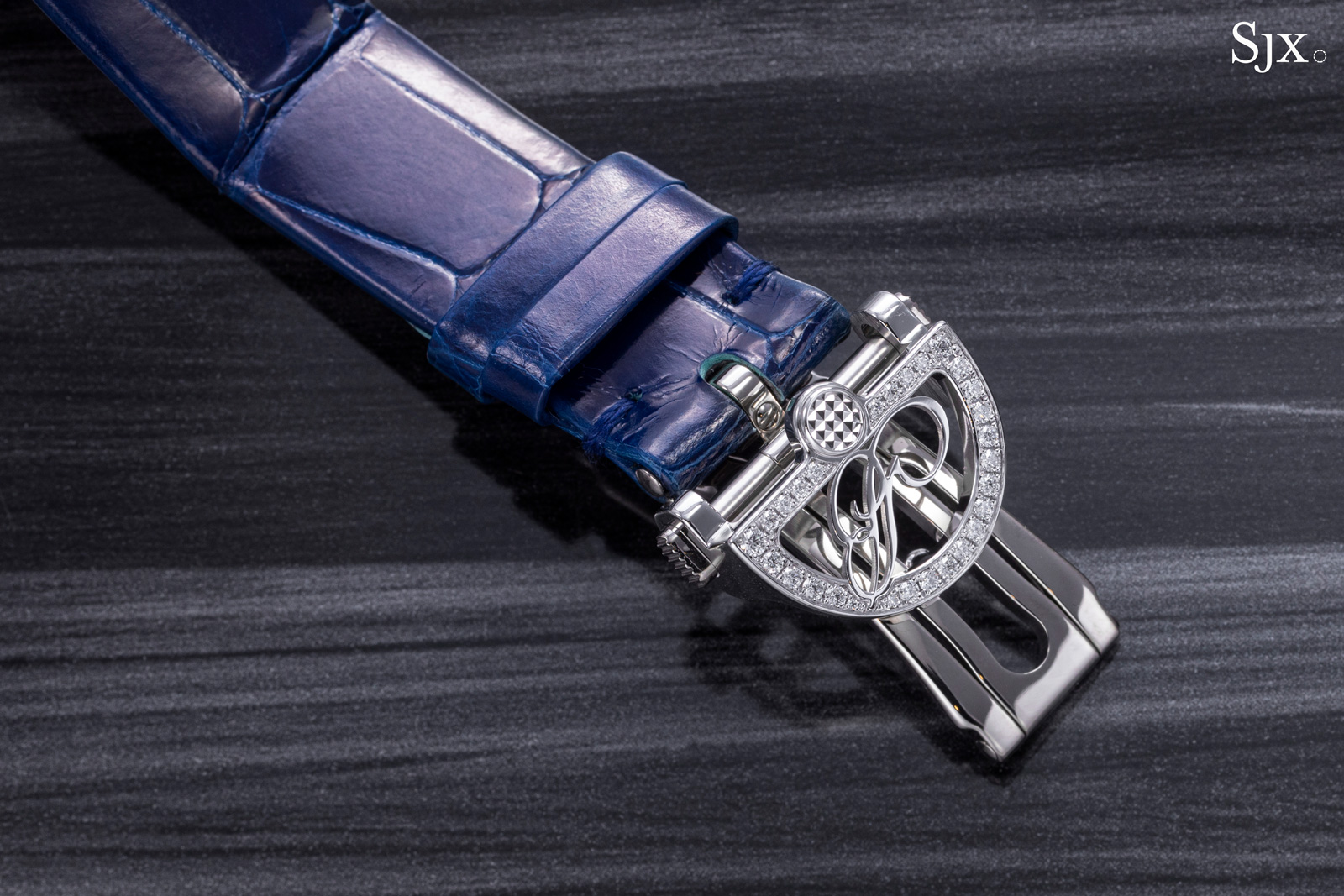 After spending some time with the new Reine de Naples, it’s hard not to be taken by the craftsmanship and attention to detail. From the finely executed dials to the top-rate cases and movements, it is clear that Breguet does watchmaking at a high level. As far as large-scale manufacturing goes, Breguet is clearly one of the best in terms of quality.

But the new pair are more than interesting than the typical Breguet, which is often formal and conservative. They are more whimsical and even charming, while also retaining the refined style associated with the brand.