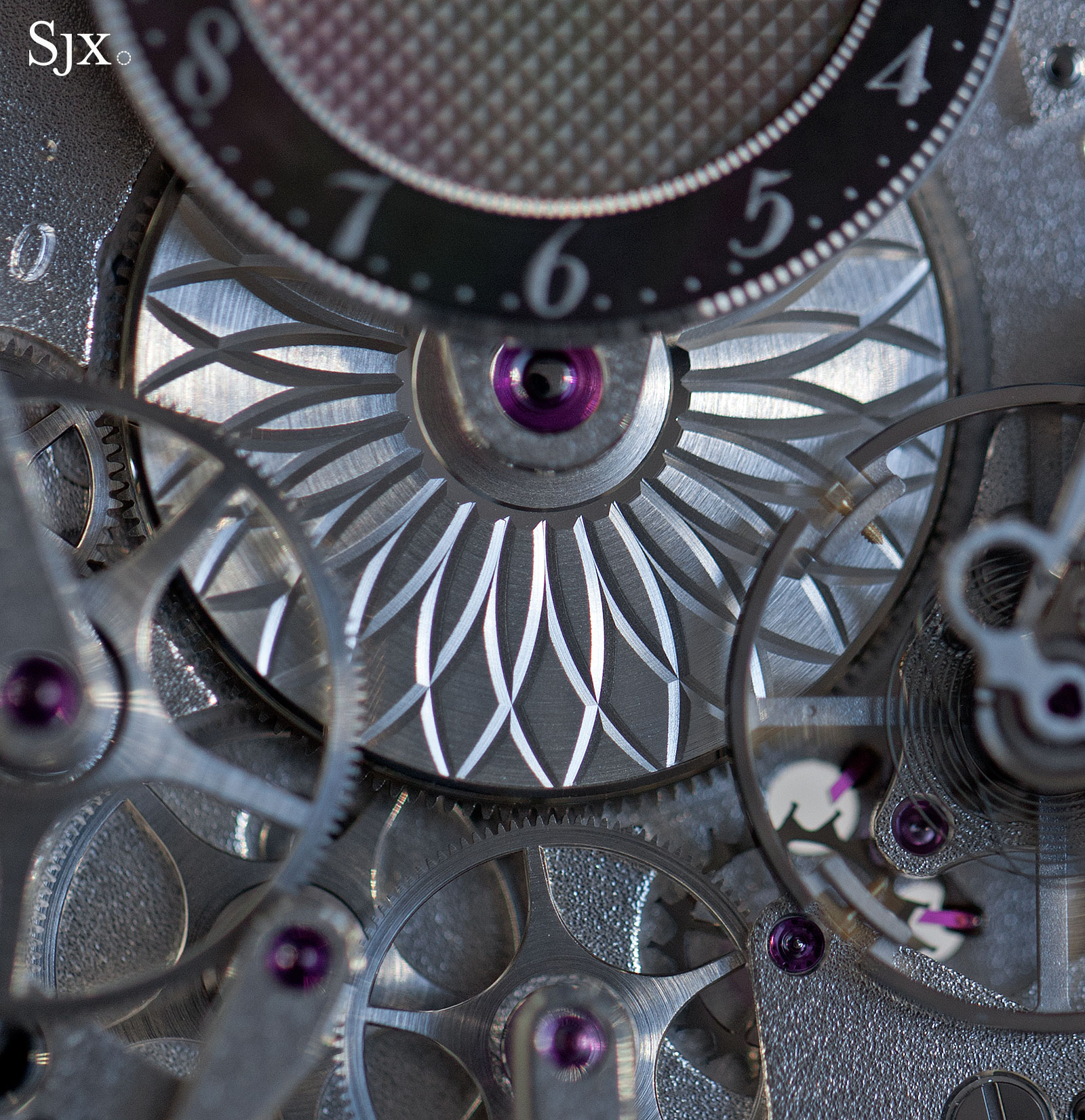 The original Breguet La Tradition 7027 is a milestone in modern watchmaking, not so much for its complication since it had none, but for its design. With the movement rearranged symmetrically for the open-worked dial, the La Tradition was a groundbreaking design when it was introduced in 2005, despite being based on 200-year old pocket watches. And the Tradition series has not included a ladies’ watch – though it does include last year’s groundbreaking Tradition Chronograph 7077 – until the recent launch of the Tradition Dame 7038.

While ladies’ watches that are actually frilly, dressed up men’s watches usually look the part, the Tradition Dame 7038 works surprisingly well. It’s white gold and 37mm in diameter (the same size as the original men’s Tradition 7037, on which it is based). That puts the Tradition Dame on the large side for a woman’s watch but the elaborate styling makes it elegant. Thin and long lugs as well as a fluted case band are typical of Breguet, while the bezel has just under 0.9 carats of brilliant-cut diamonds. Unusually the crown is set with a synthetic ruby of the same sort used in the movement. The movement is identical to that in the men’s Tradition, but slightly more elaborate. The barrel right in the centre of the movement has a guilloche barrel cover, while the sub-dial for the time is dark mother of pearl engine turned with clous de Paris and printed with Breguet numerals.

One of the key features of the Tradition movement is the U-shaped pare-chute shock absorber spring for the balance jewel, a feature that draws on the original, 18th century invention of Abraham-Louis Breguet. While the pare-chute is a nod to history, the hairspring is silicon – a signpost to the future of watchmaking. Non-magnetic, precisely shaped and manufactured in large quantities, the silicon hairspring is now a common feature in Breguet watches (and by extension its sister companies in the Swatch Group).

The movement is finished in a bright white-grey plating with frosted surfaces and polished bevels. Everything is cleanly and neatly executed, to a degree that makes it obvious mechanical aid was used in the finishing. So while the Tradition is obviously based on 19th century pocket watches, the movement’s details are distinctly modern. The calibre 505SR is self-winding, with a hammer shaped rotor inspired by the early automatic winding mechanism invented by Breguet and named perpetuelle. Those were wound by a hammer-shaped weight that swung from side to side, winding the mainspring.

While the modern day calibre 505SR has a similarly shaped rotor, it works in an entirely modern manner, with the rotor making a full 360 degree oscillation to wind the barrel. This is perhaps the biggest aesthetic drawback of the watch, as the hammer-shaped rotor is ungainly and only serves as a historical throwback that isn’t really necessary. Fortunately it is hidden on the back.