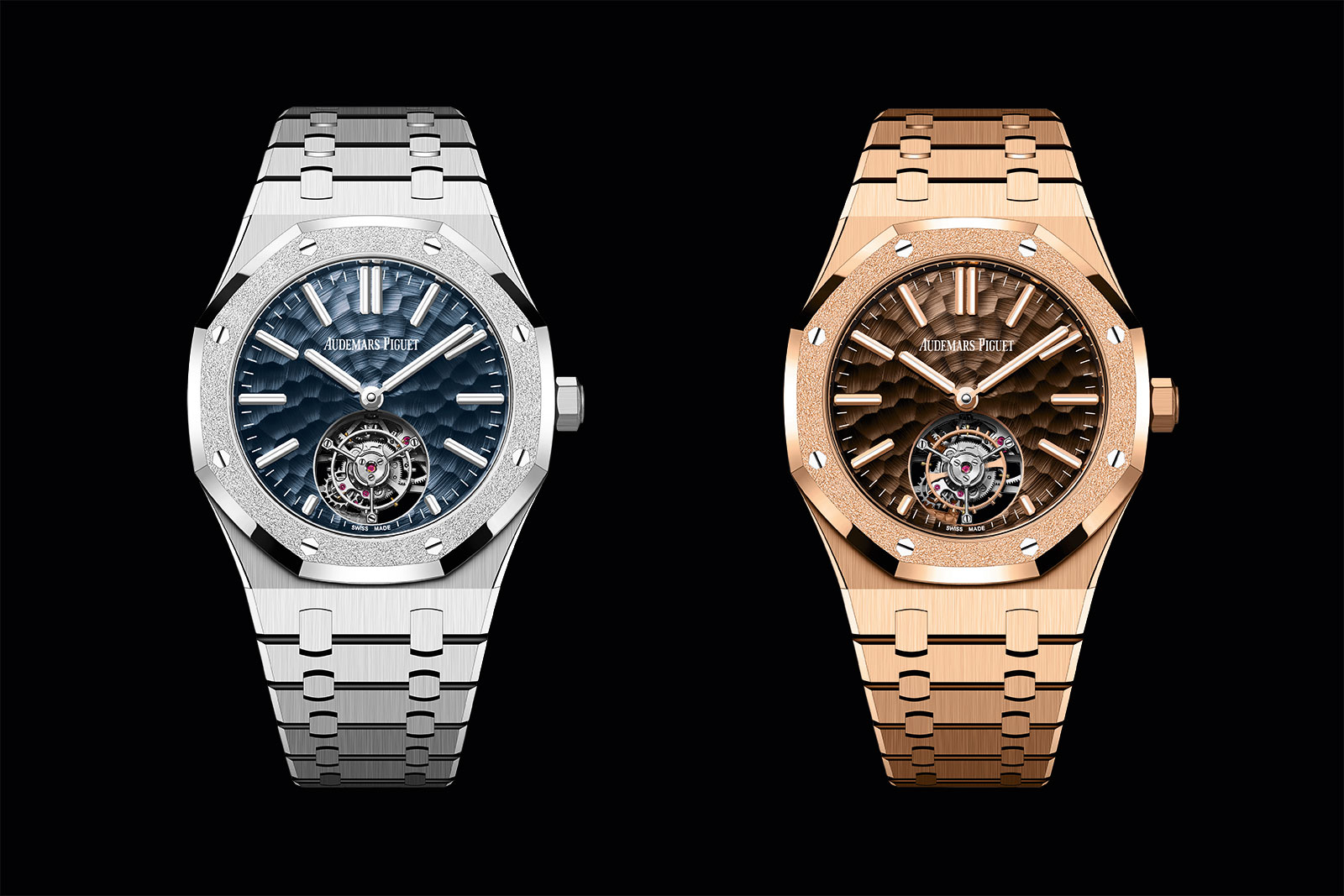 Arguably the most significant Audemars Piguet timepiece ever, the Royal Oak celebrated its 50th anniversary last year with a host of new models, including the all-new Royal Oak “Jumbo” ref. 16202 and even a skeletonised, selfwinding flying tourbillon.

And just before entering the New Year, Audemars Piguet (AP) dropped the Royal Oak Selfwinding Flying Tourbillon “Dimpled Dial”. Essentially identical to the standard model, the new version – which is available in either white or pink gold – is distinguished by its surface finishing: dimples on the dial and frosting on the bezel. 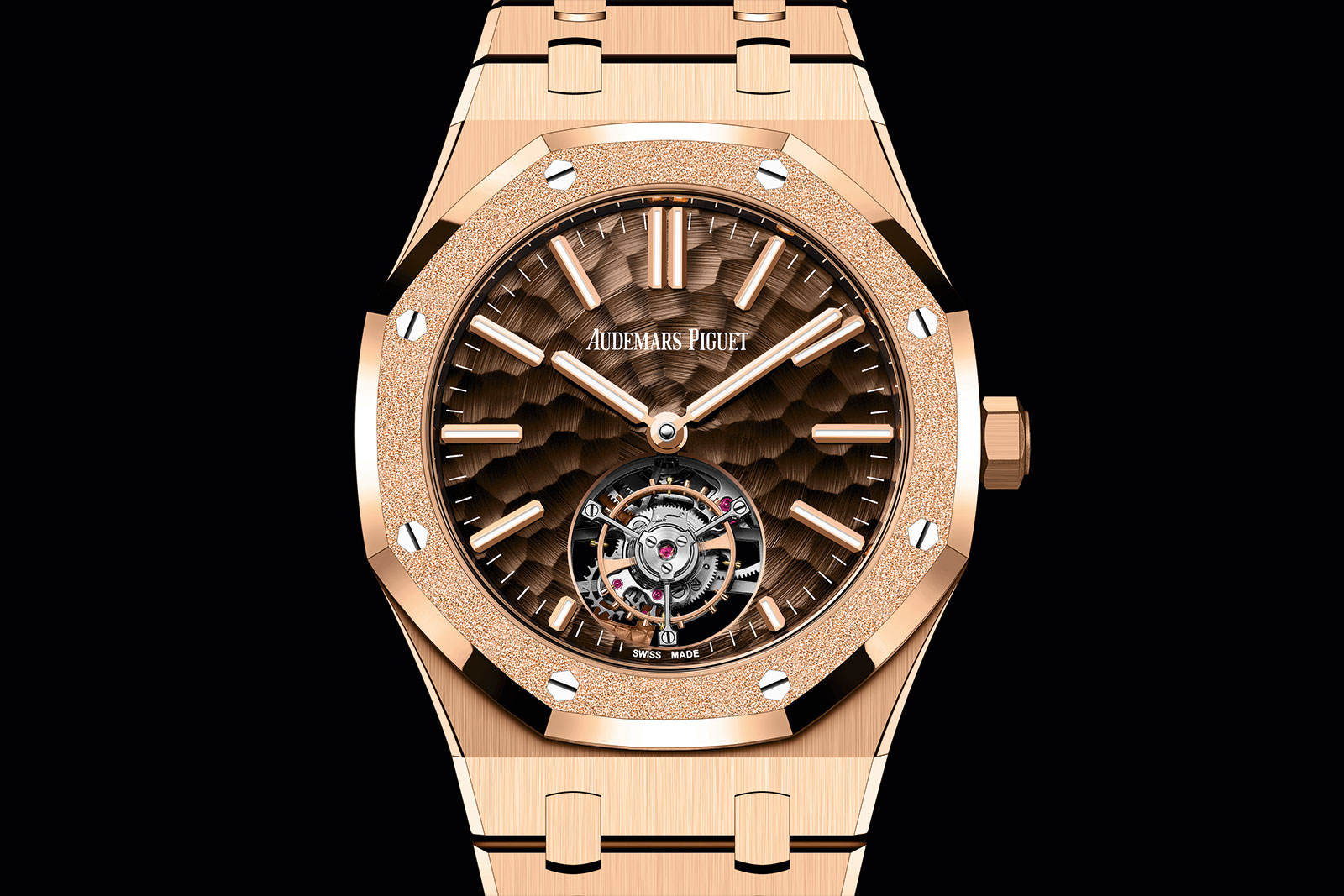 Limited to 33 pieces each, the pair are primarily for Japan, with only a handful of watches available outside the country. According our sources, the unusual combination of finishes were proposed by Japanese watch influencer Chronopeace, explaining why most of the run will be sold only in Japan – though this has neither been confirmed nor denied by AP.

I first heard about this discreet release when images were shared with me. As AP occasionally won’t say what drops, the watch was not announced officially, but instead quietly added to its online catalogue, perhaps because it is only available in Japan. Despite being low key, this new release will surely appeal to anyone who likes the Royal Oak but wants the added oomph of a special dial. 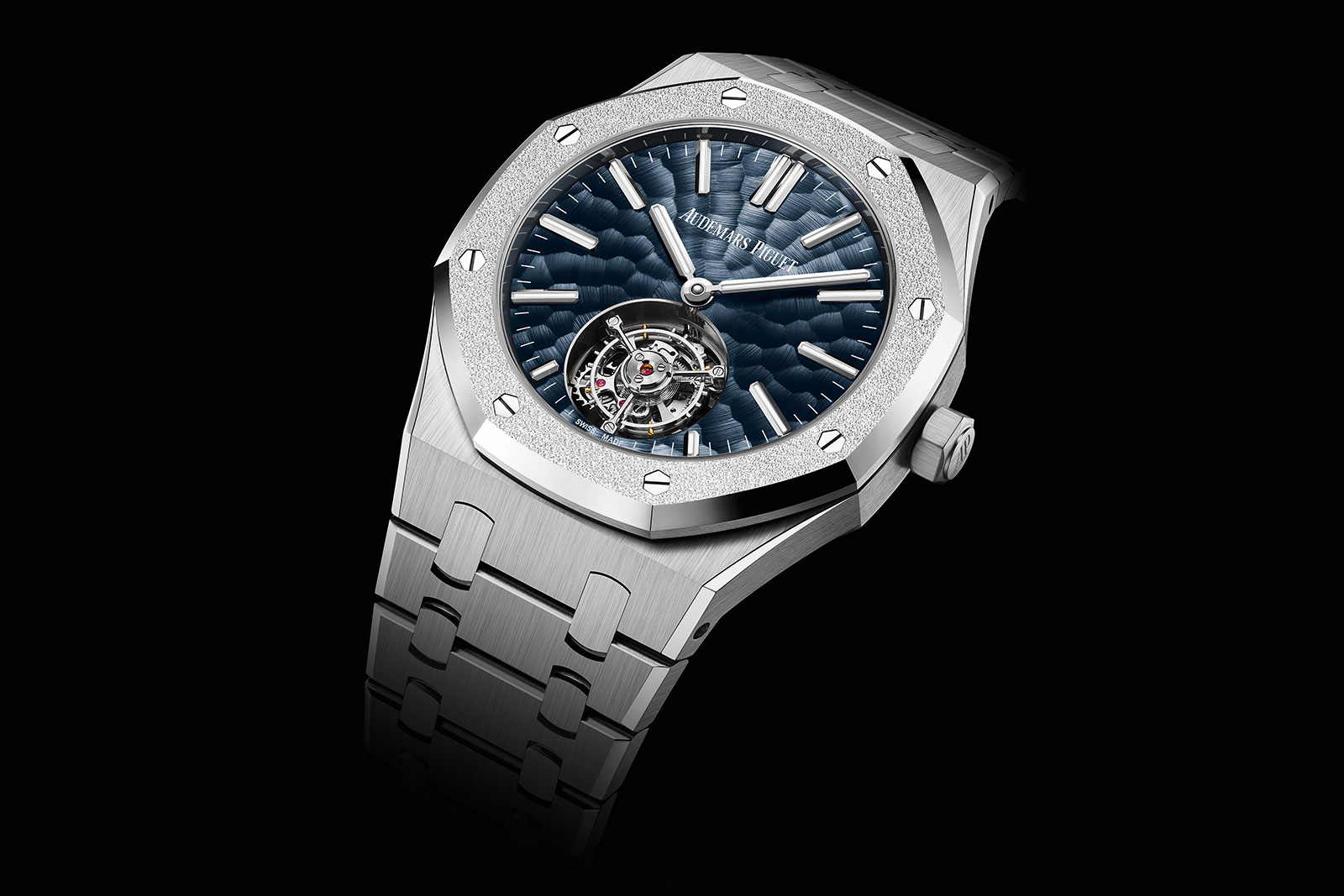 At a glance, the watch easily reveals itself to be stunning. The layout and style are familiar, but the few tweaks to the dial and case make it stand out. It is refreshing to see the traditional petite tapisserie guilloche  – the distinctive chequerboard pattern that helps defines with the Royal Oak – swapped out for a matte, dimpled pattern. The textured dial adds a touch of quirky elegance to an iconic design.

I do hope this dimpled dial will be incorporated into other models in time to come, though wishing for a stainless steel version of this will probably be in vain. 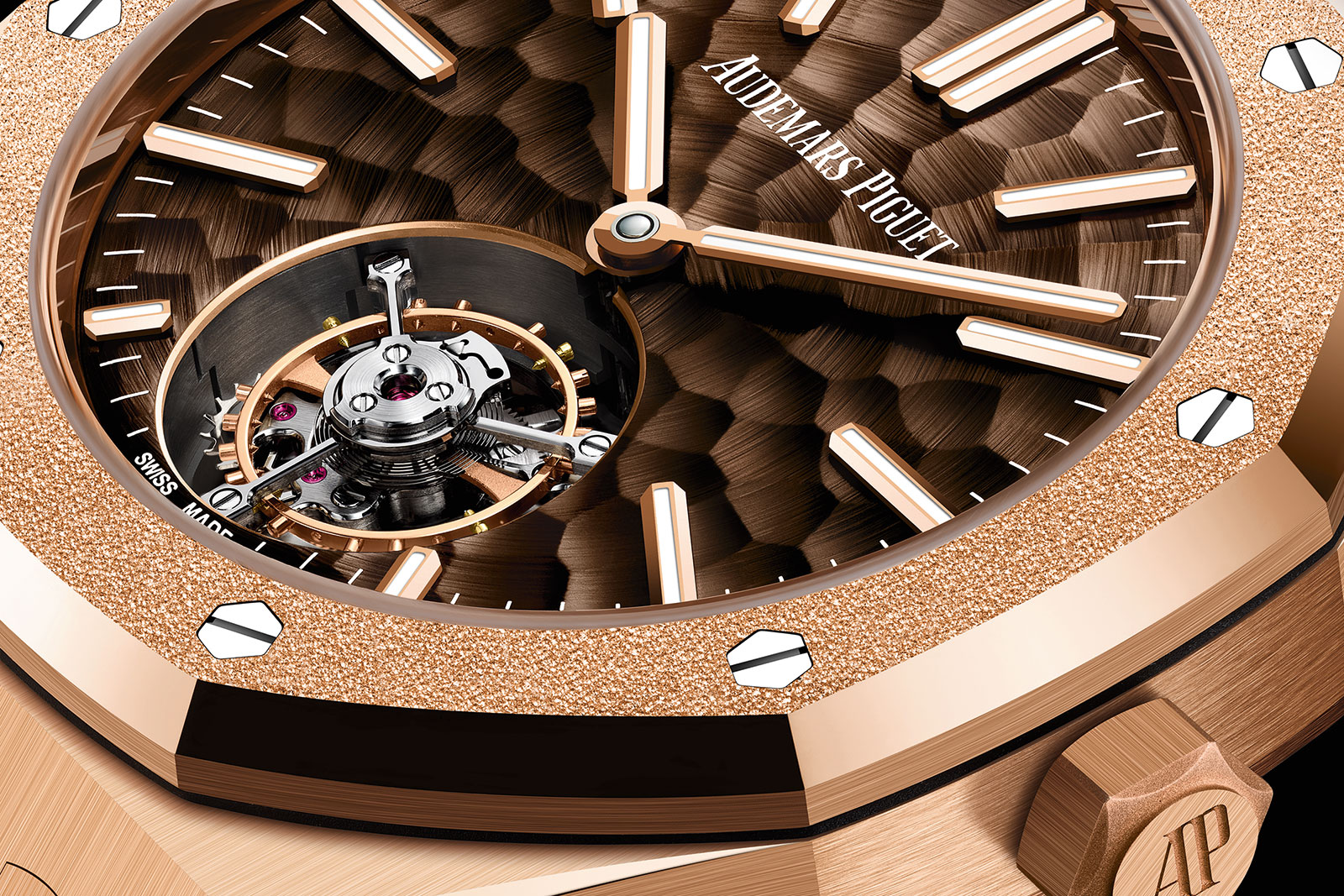 A twist to the Flying Tourbillon

The new Royal Oak tourbillon is all about the dimpled dial that’s blue for the white gold model and brown for pink gold. Instead of the typical geometric guilloche that is synonyms with the Royal Oak, the dimpled texture is nuanced and slightly artisanal in appearance, with a metallic finish that will catch the light.

One noticeable difference between this and the standard guilloche dial is the logo at 12 o’clock. Here it’s printed on the dial instead of being an appliqué, a consequence of the dial texture that gives it varying heights at different locations, making an appliqué unfeasible. The printed logo seems less prominent than the applied metal emblem, slight adjustment, making the dial’s textured, metallic finish more obvious. 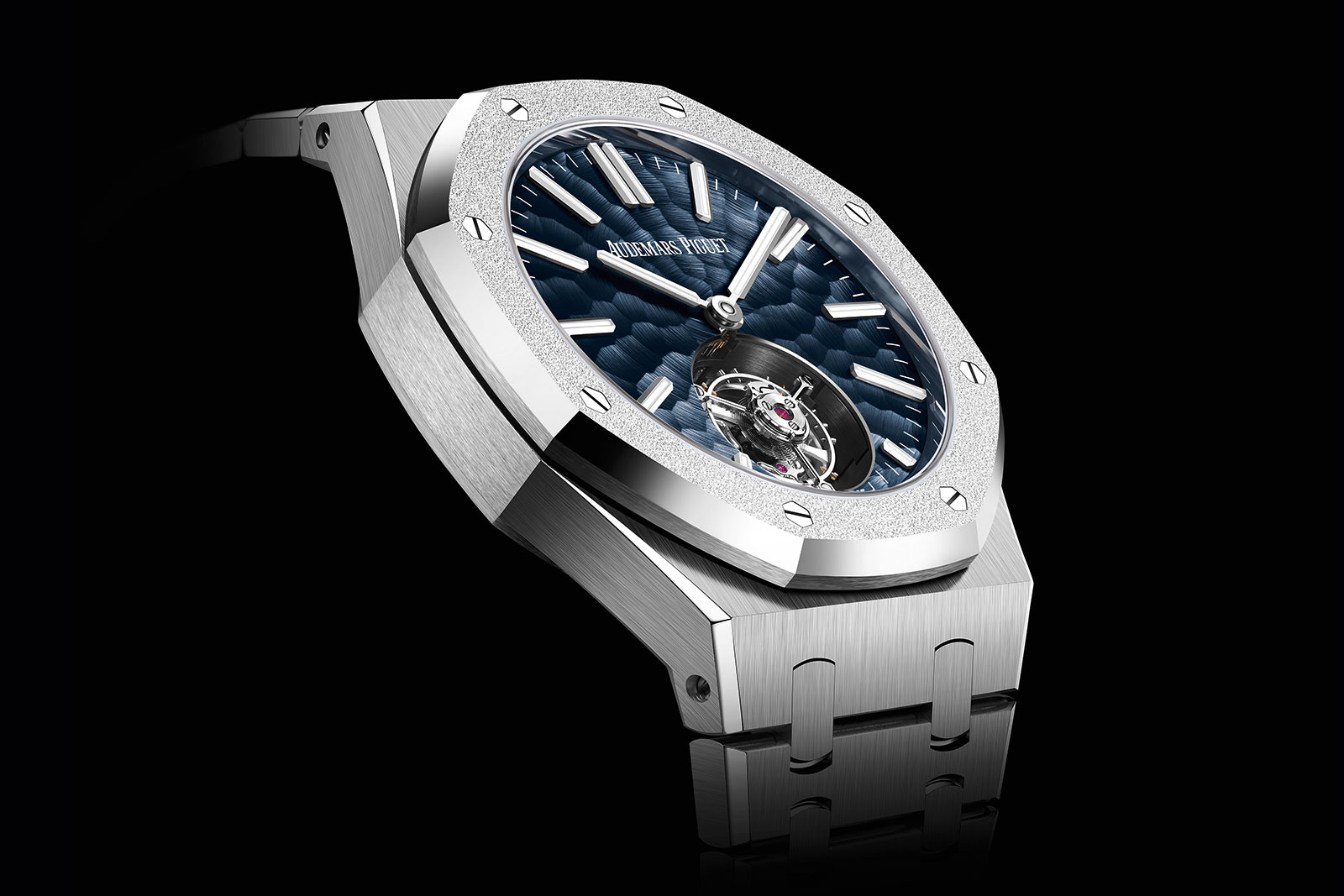 Equally unusual is the combination of finishes on the external components. While the case and bracelet are brushed and polished as is convention for the Royal Oak, the bezel has a hammered, “frosted” finish. This is the first time that AP is combining conventional finishing with the newer “frosted” technique.

The “frosted” bezel is created via a technique of hammering its surface with a sharp, diamond-tipped burin, creating tiny dimples that create a surface that’s granular and slightly sparkly at a distance. 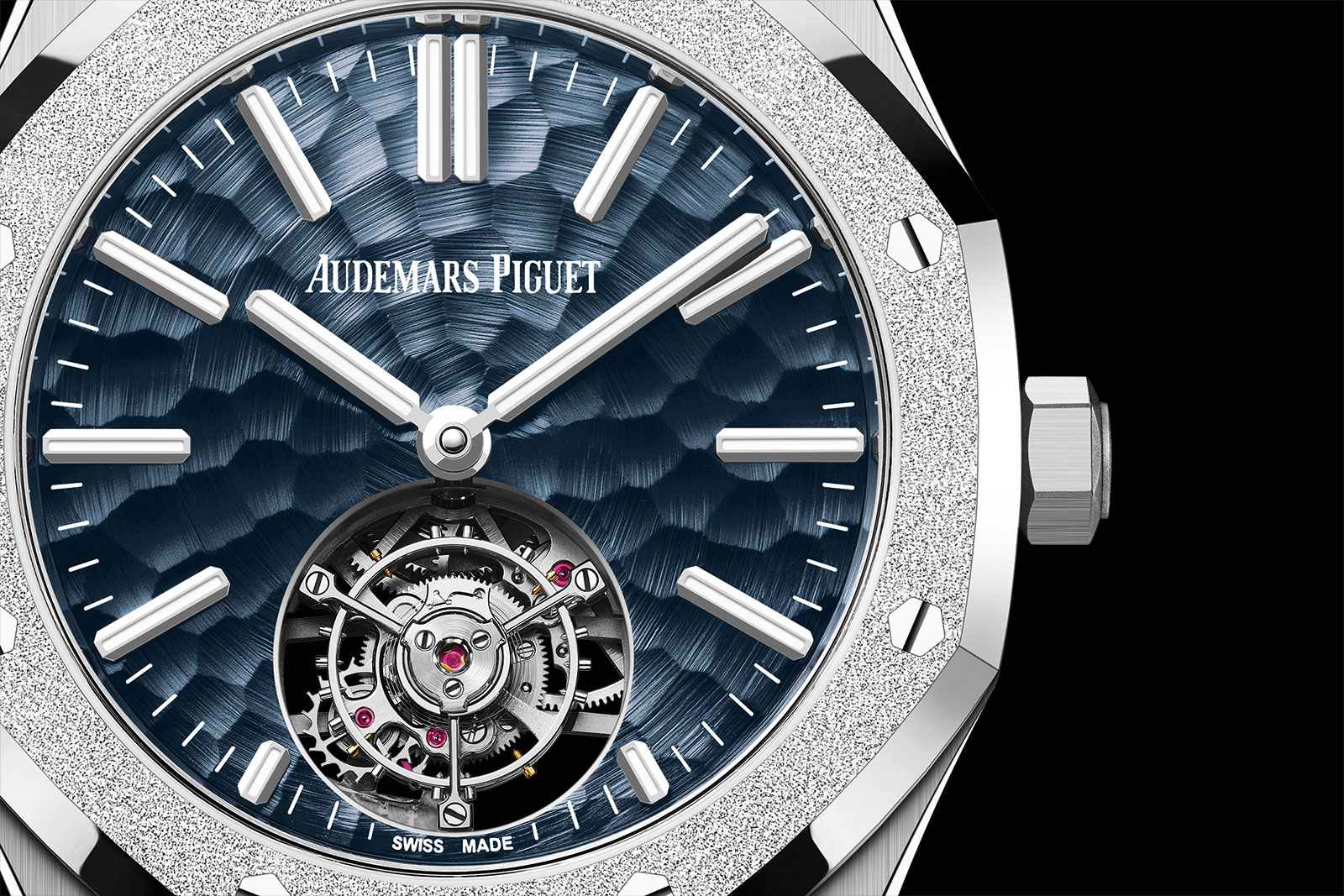 Stylistic changes aside, this is identical to the standard Royal Oak Selfwinding Flying Tourbillon. The 18k gold case measures 41 mm in diameter and 10.6 mm in height, while the hands and indices are solid gold. 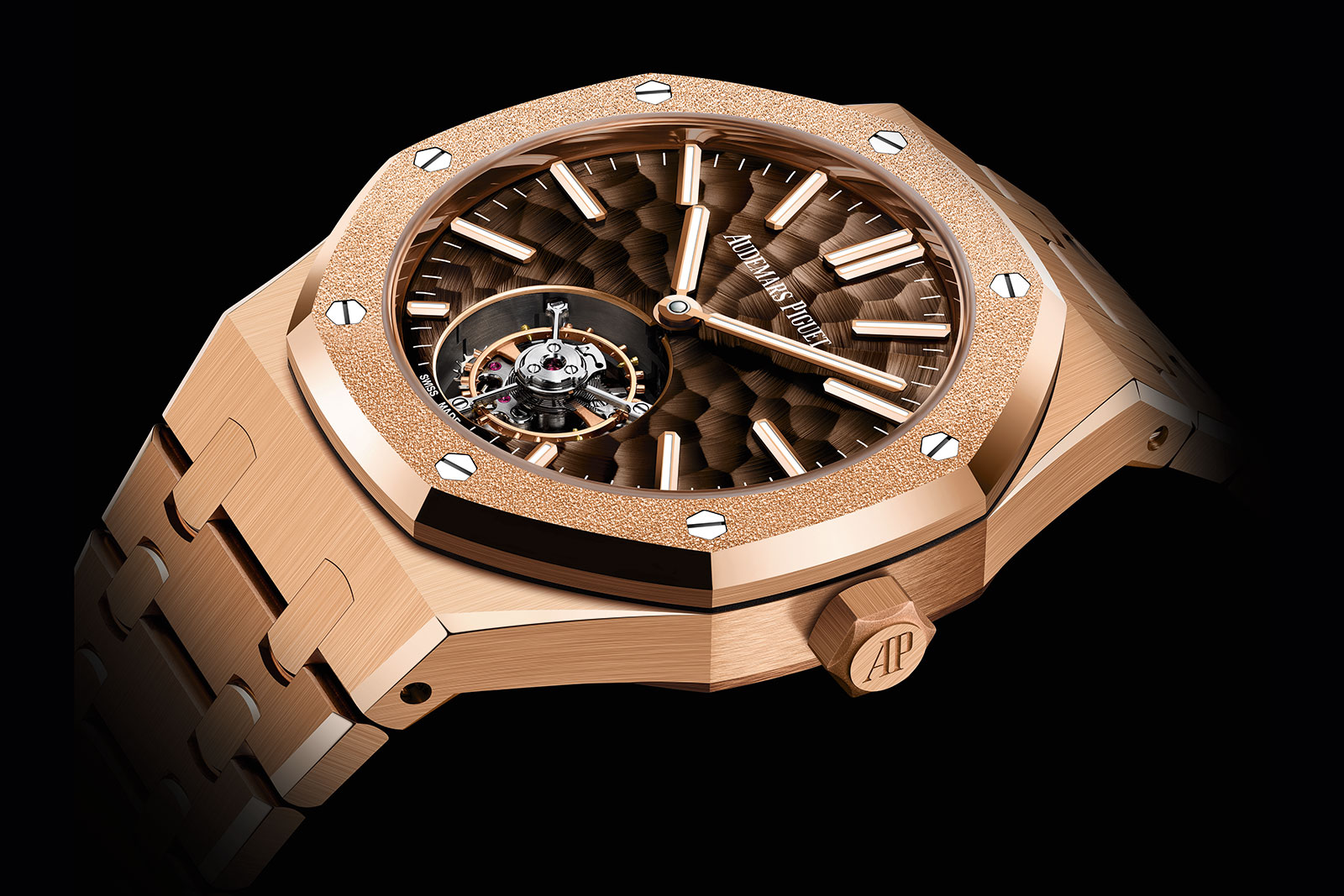 And at six o’clock sits the flying tourbillon regulator, which gets its name from the fact that it is only secured on its lower pivot, leaving the upper pivot “flying”. This does away with the need for a tourbillon bridge, leaving nothing to obscure the tourbillon cage.

The movement remains the in-house cal. 2950, an automatic movement first found in the Code 11.59 tourbillon but now found in several Royal Oak models. 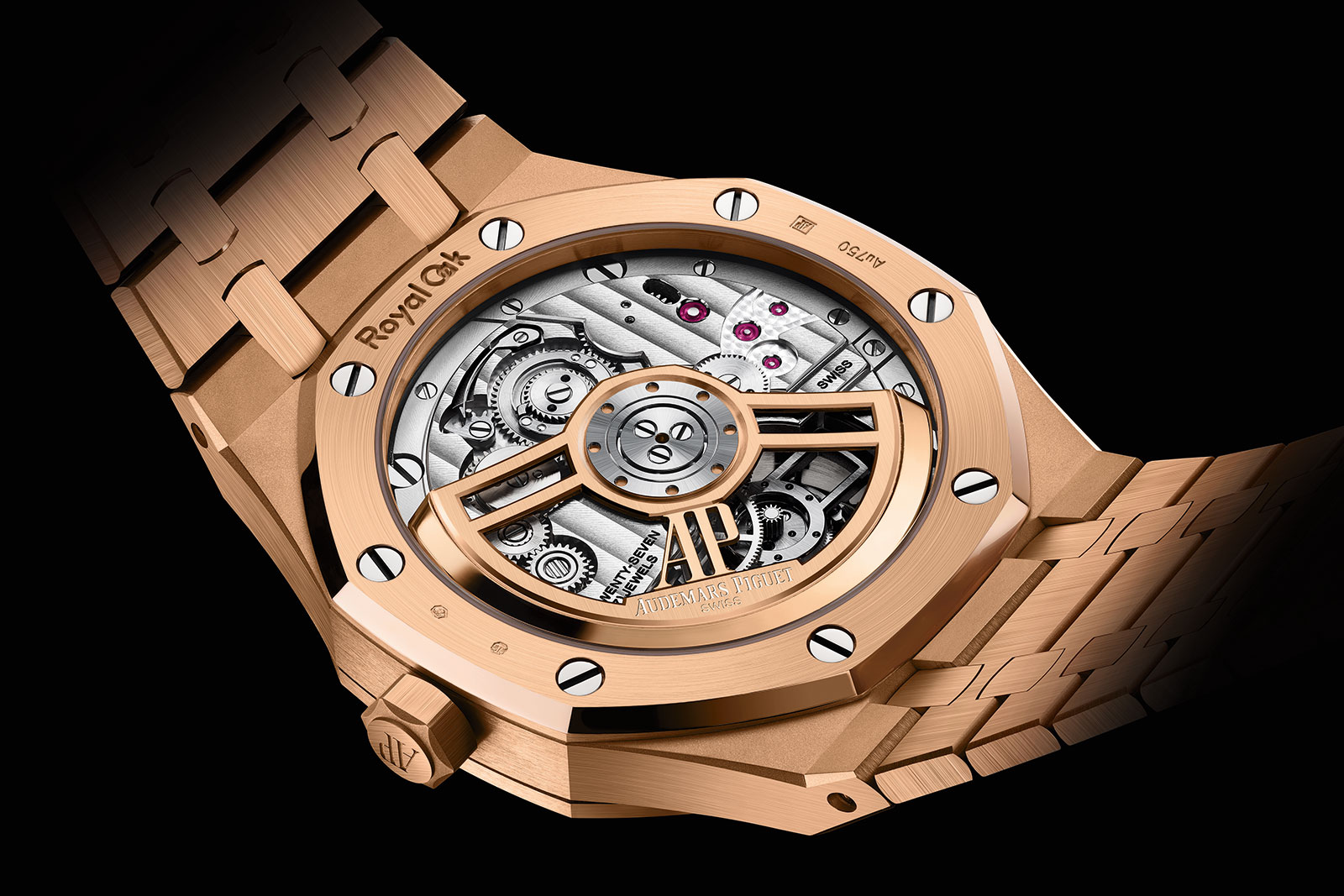 Limited edition: 33 pieces each
Availability: 28 pieces of each reserved for Japan with the balance at boutiques in other countries
Price: Price upon request

Correction January 10, 2023: The two models are available primarily in Japan and limited to 33 pieces each.

The original, but with a tourbillon.