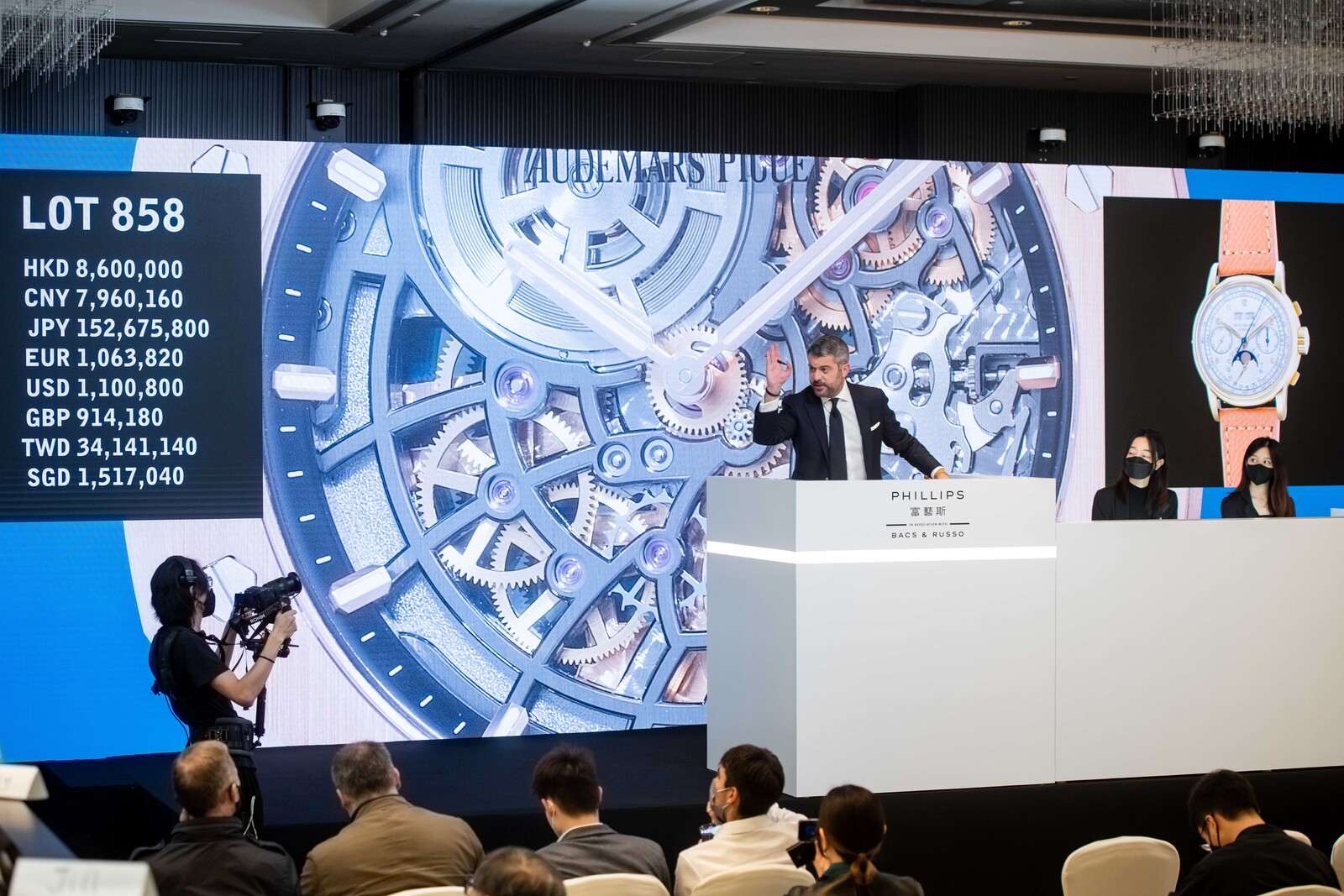 I had long tuned in for the livestream of auctions since I purchased my first vintage timepiece almost a decade ago. I followed the blockbuster results in the salerooms of the three leading auction houses, Phillips, Sotheby’s and Christie’s, but I had yet to experience being in the room until my outing to the recent fall sales in Hong Kong.

Watching the gavel fall on screen

I knew I had to attend a live auction after watching the Sotheby’s Geneva auction that took place in December 2014. On my laptop I saw the sale of the Henry Graves Supercomplication unfold, when the man with the red tie, whom I later discovered to be Aurel Bacs, won the watch for US$24 million.

A few years later, while commuting to my first job out of college, I caught the exact moment when Paul Newman’s “Paul Newman” Rolex Daytona sold for a record at Phillips’ in New York. More recently, I tuned in for the sale of the F.P. Journe FFC Blue at Only Watch last year. Even though I only watched these sales on a screen, it is clear that watch auctions at the highest level are almost a competitive sport, with bidders from across the world or the aisle locked in duel until the hammer comes down. 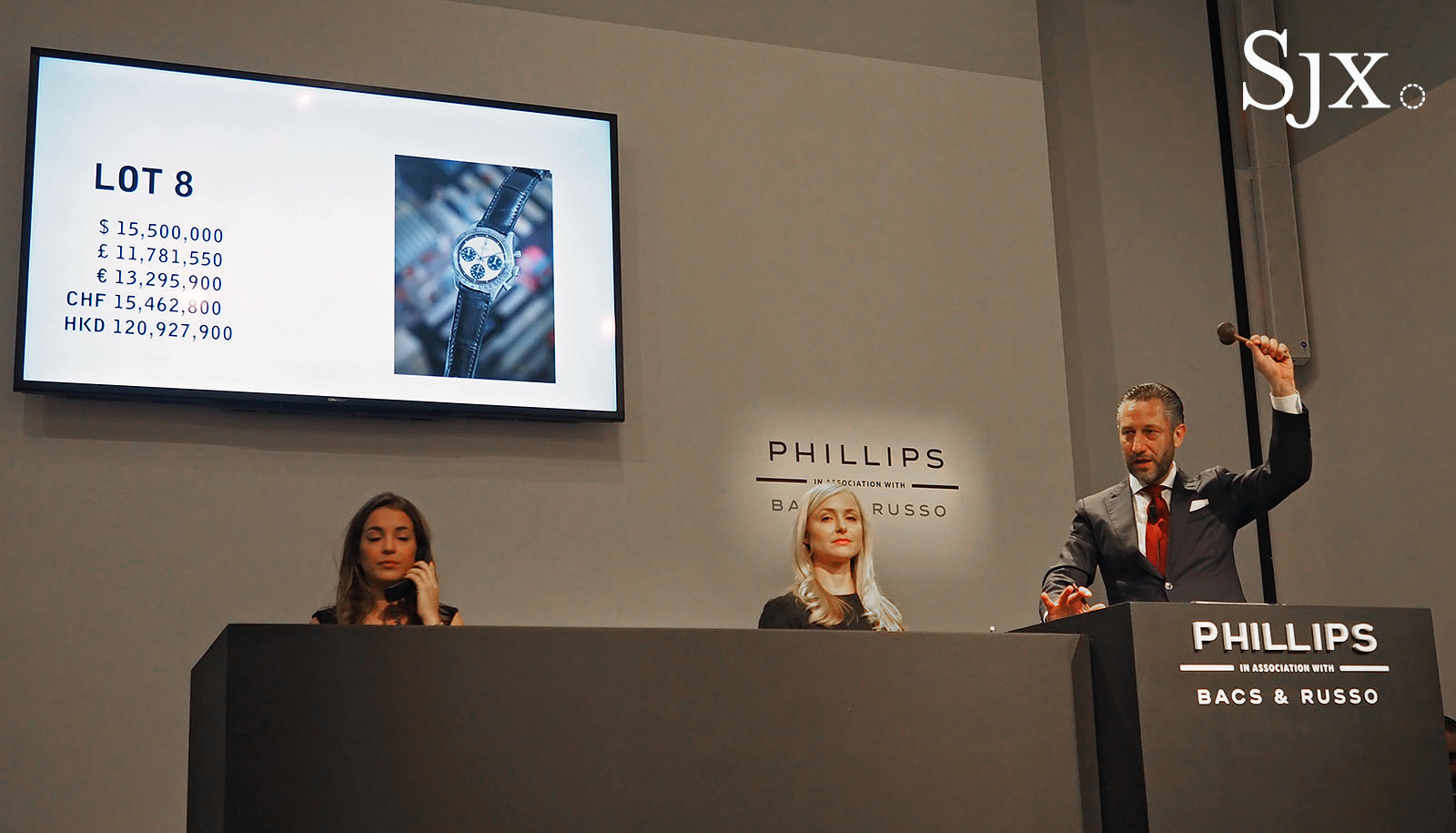 The saleroom in Hong Kong

When the Hong Kong government announced the lifting of most pandemic restrictions in September 2022, namely the mandatory hotel quarantine, I embarked on my first overseas trip in two years – perfectly timed to coincide with the fall auction season in the city.

As soon as I landed, I dropped by my hotel for a quick change of clothes before heading to the J.W. Marriott where Phillips was staging the two-day Hong Kong Watch Auction: XV. When I entered the Phillips saleroom, I was struck not by the crowds but by the lack of them. With the removal of many pandemic curbs, I had been expecting the crowds to be out. Only a few seats in at the front of the saleroom were occupied and most of the few bidders in the room sat at the round tables at the back, leafing through the auction catalogue while watching the sale. 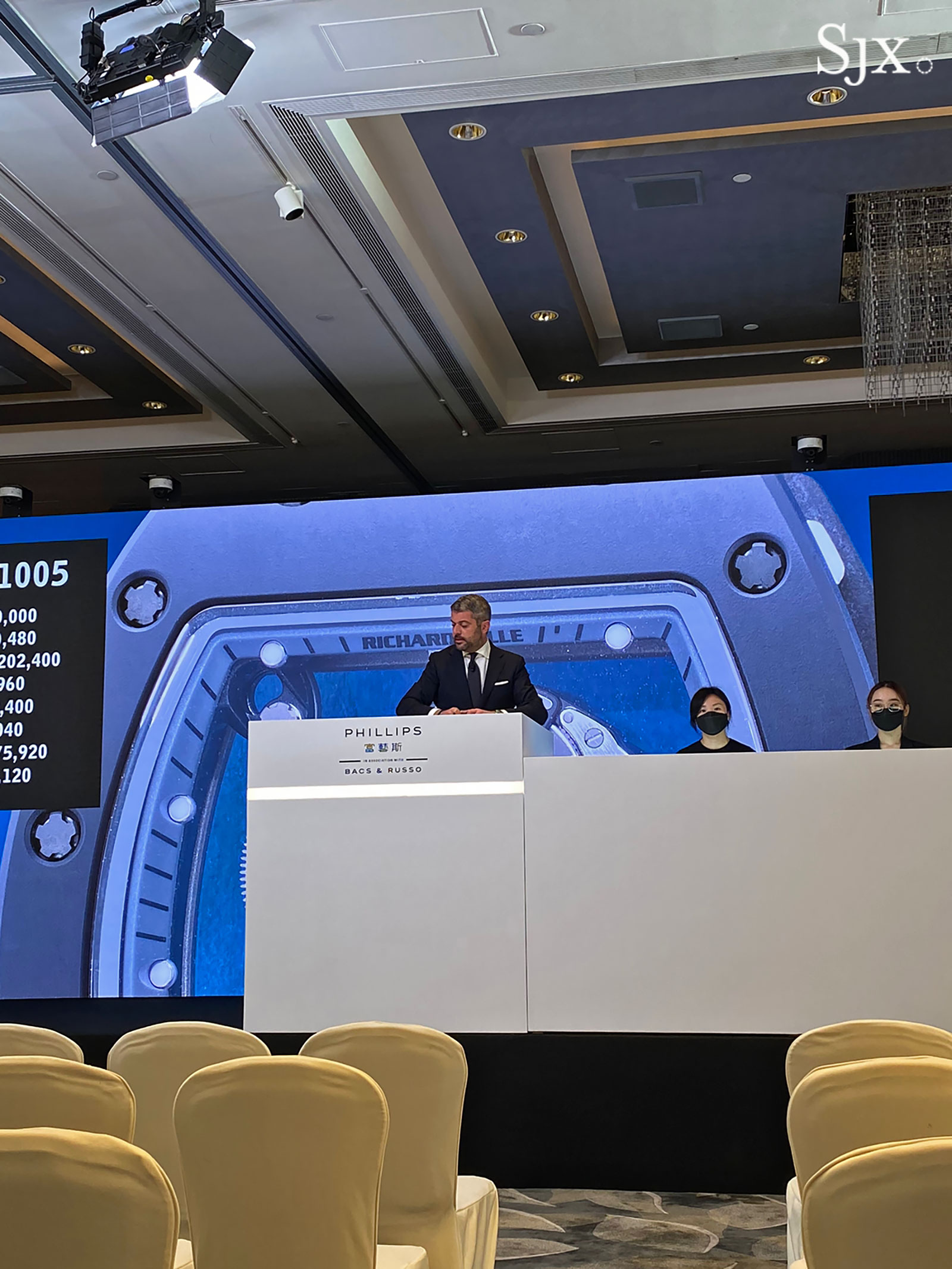 My vantage point from the front of the room, with head of department Thomas Perazzi at the rostrum

The thin attendance was due in part to the fact that some restrictions on inbound travellers had yet to be lifted; the Hong Kong government only did away with them in December. Instead, most bidders were on the phone or online. The crowd, in fact, was the two dozen or so Phillips staff members manning the telephones.

Yet the energy in the room was palpable, but in a measured and patient manner – it was clear that all bidders were determined to get the best deal possible. Bids came in from all over the room, and the auctioneer had to work hard to keep up with the pace. While there were a few moments of silence as the sale progressed, the room erupted into a frenzy of activity when it came to popular lots, mostly from the likes of Patek Philippe, Rolex, Audemars Piguet, and even independents like F.P. Journe. The crowd also fluctuated throughout the sale, thinning out with less interesting lots and gaining in number as major lots came up. 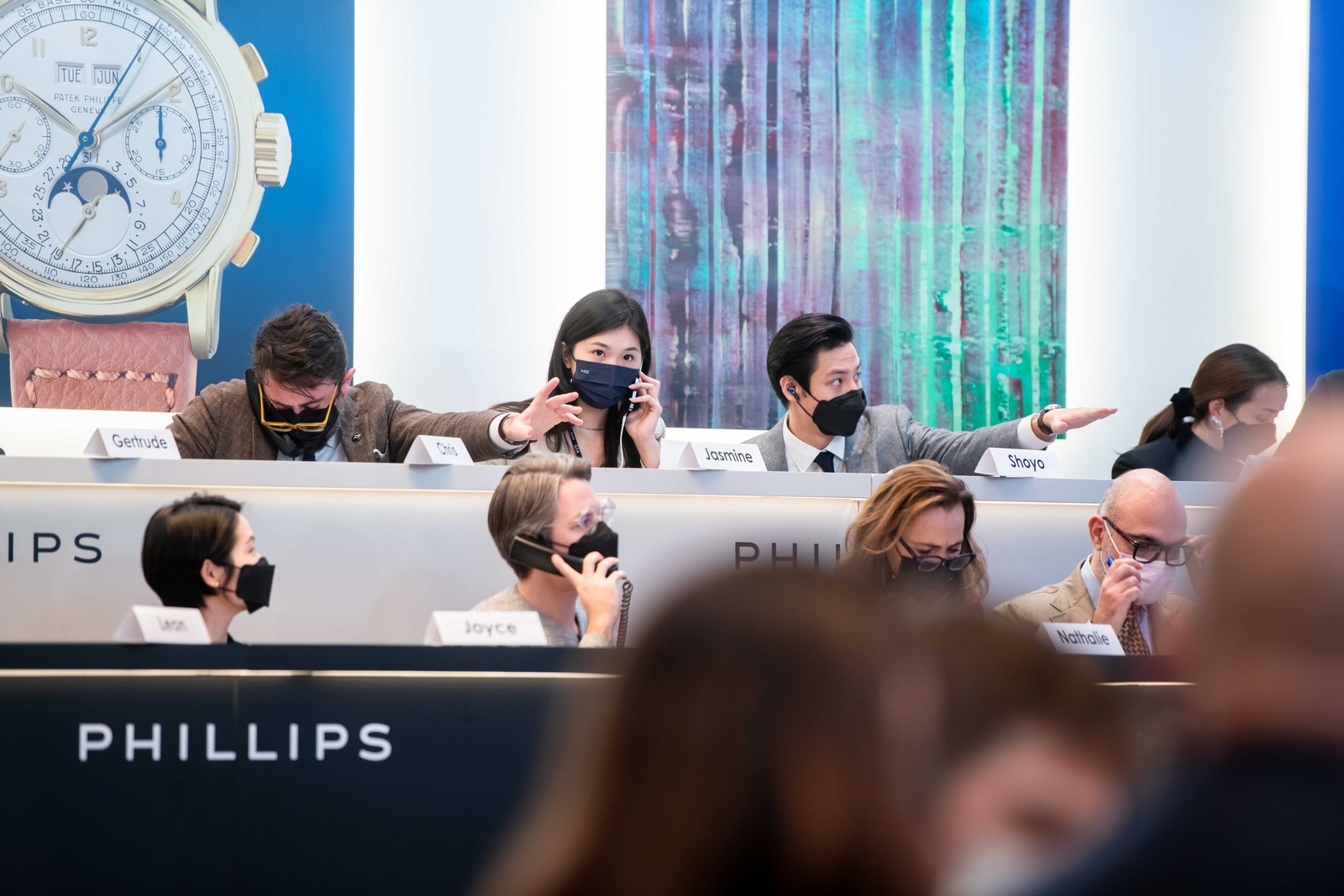 A majority of the bidding came through the international phone banks at the J.W. Marriott. Image – Phillips.

While the top lot of the sale both in terms of prestige and value was undoubtedly the yellow gold Patek Philippe ref. 2499 – the room was probably the most full when this was sold – my personal highlight was the Philippe Dufour Simplicity.

While this was not the first time I saw one in person, the Simplicity has always stood out for me as something truly special. As soon as the lot opened at a mere HK$1 million (about US$130,000), two bidders jumped into the ring. One was an Asian gentleman in the room and the other a phone bidder. Even though it was only the two of them bidding, the price rapidly escalated within a matter of minutes.

The jousting over the Simplicity continued until the phone bidder triumphed with HK$5 million (about US$640,000) and the gentleman in the room waved the white flag. The hammer came down to applause in the room. The total bill for the buyer was HK$6.9 million with fees, equivalent to US$886,000. 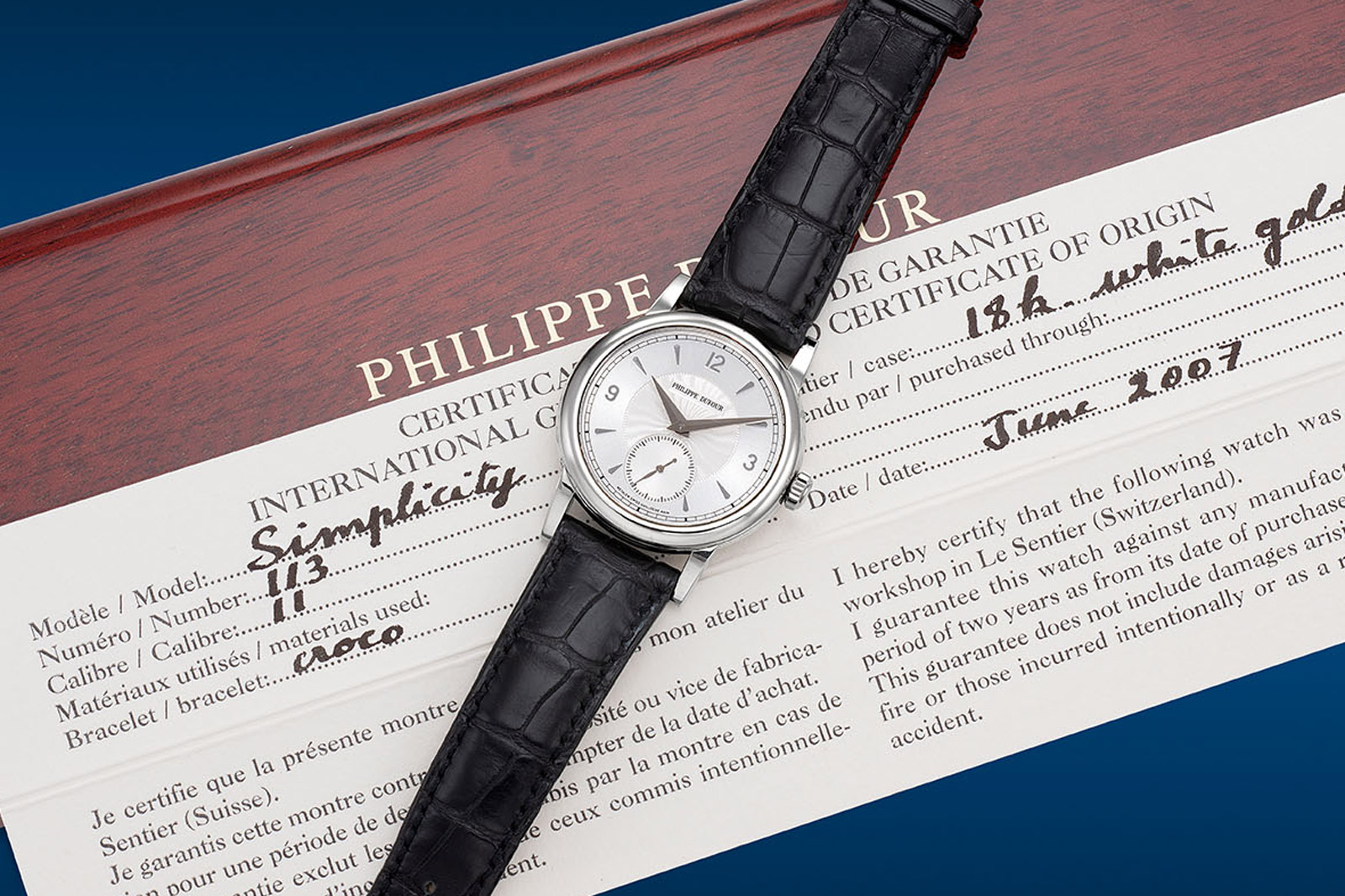 The Simplicity at Phillips, a 37 mm example in white gold. Image – Phillips

But the fireworks did not end there. About an hour after the Simplicity, it was the turn of a Patek Philippe Calatrava ref. 2508 fitted to a fine, yellow-gold Gay Frères bracelet. It was a simple watch with a modest estimate starting at just HK$95,000 (about US$12,000).

I have to admit I was surprised by the mind-boggling result of HK$756,000 including fees (about US$97,000). By most measures, this was not one of the top lots before the sale and it was barely on my radar.

The ref. 2508 encapsulates auctions perfectly: you can never predict what will happen at a live auction. Watching the bidding war over the ref. 2508 was a real eye-opener. It showed me how passionate and determined collectors can be and illustrates their willingness to pay top, top dollar for something special. And it also reveals that even a seemingly under-the-radar watch will not go unnoticed by keen eyes. 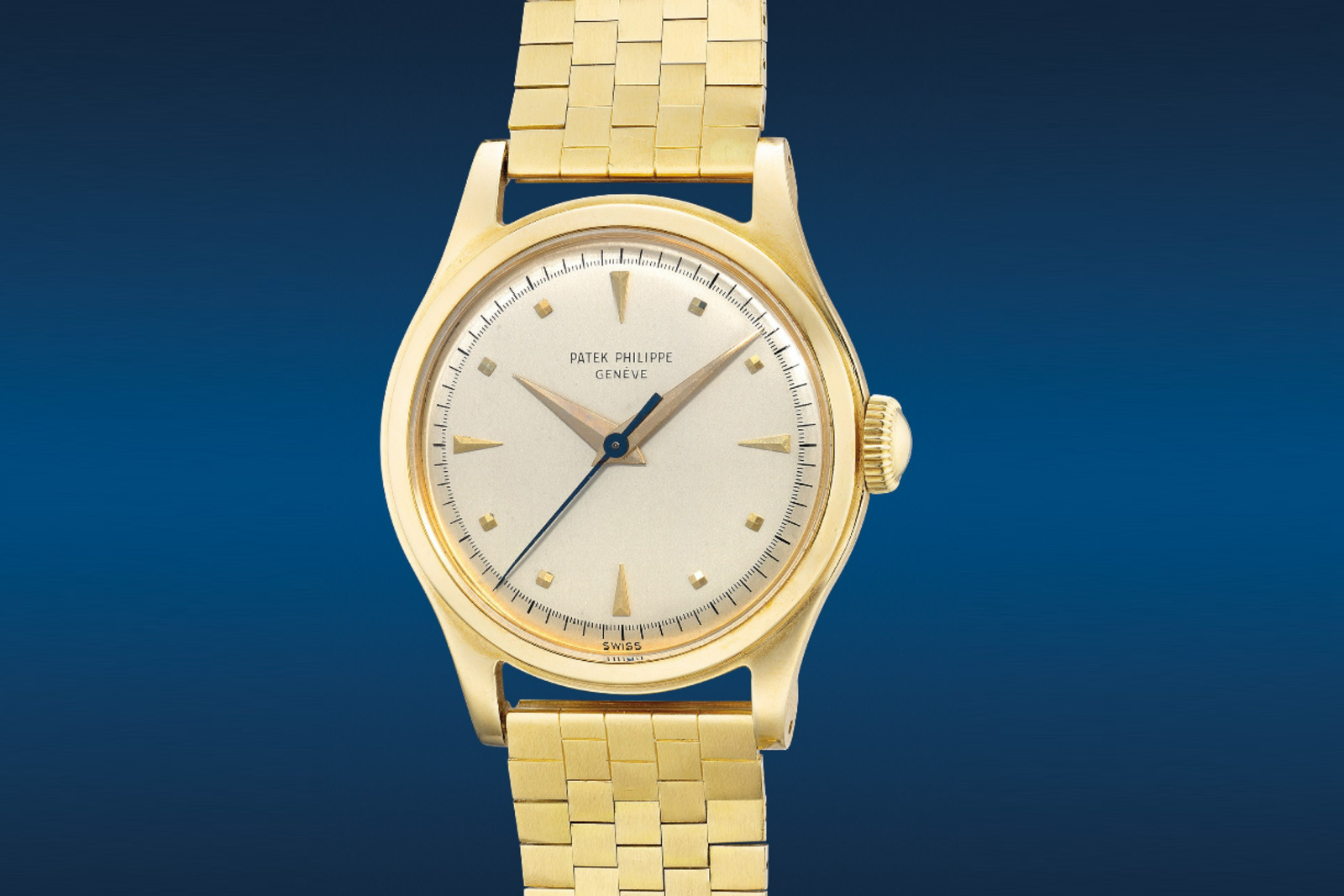 The ref. 2508 and its vintage bracelet

A sense of camaraderie

My first live watch auction was a proper introduction to the world of high-end watch collecting. I got to see some of the world’s best timepieces up close. Even though the turnout was sparse and the atmosphere casual, the buzz in the room was discernible; I could feel the excitement.

But it also showed that the hobby is about people and the scene is a small one. From the handshakes and smiles I could tell that many of the people in the room knew each other. There was a sense of camaraderie among the participants along with a healthy dose of competitive spirit, even between Phillips colleagues bidding against each other on behalf of clients.

I realised that a major watch auction is not simply a sale of watches; it is a social event where people come to mingle, network, and show off their latest acquisitions. I didn’t raise my paddle and came away empty handed, but I was happy to sit back and watch buyers battle it out for the top lots. Ultimately, I left with a better understanding of watch auctions and a greater appreciation for the beauty of the watches themselves.