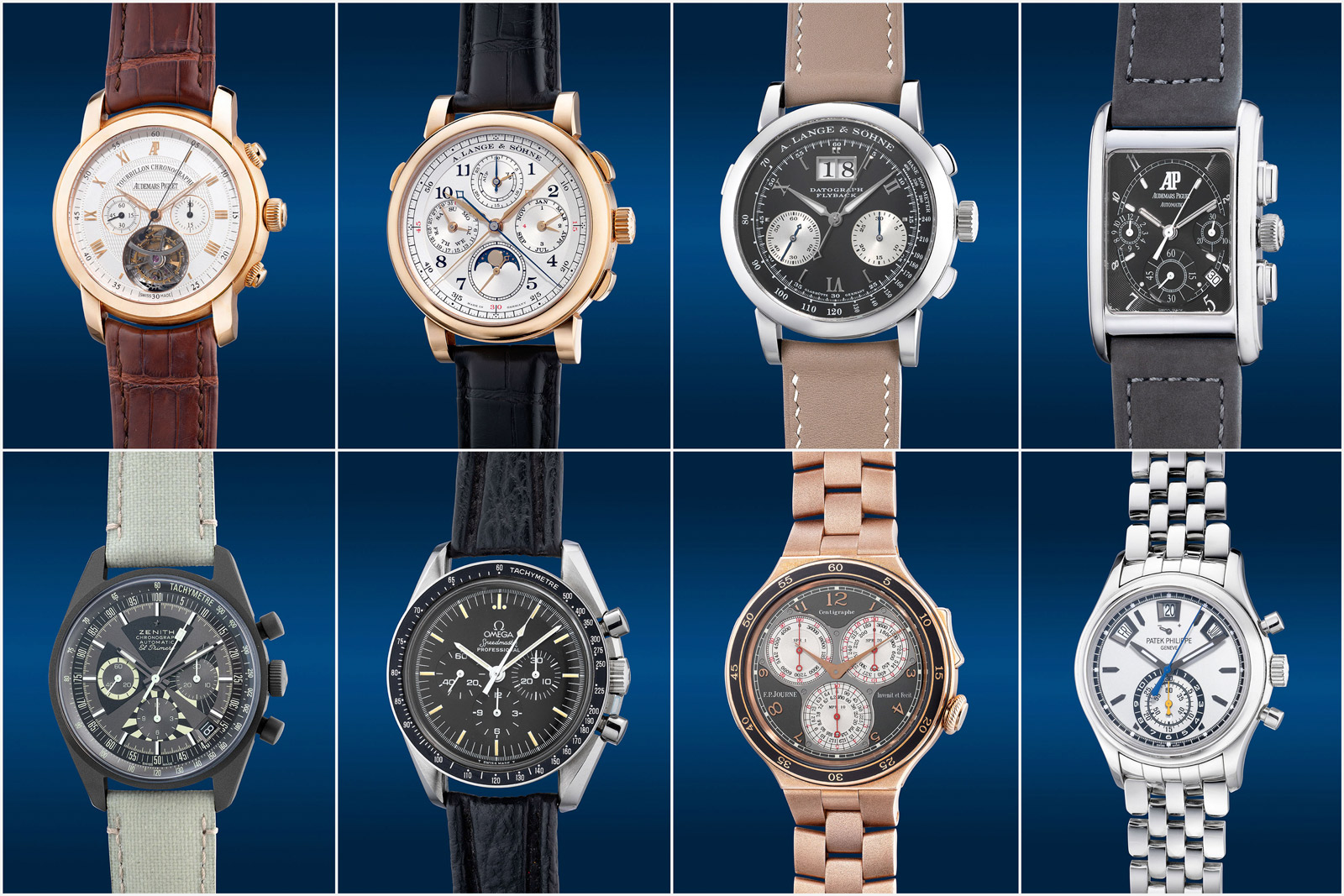 Having already covered highlights in two categories – independent watchmaking and interesting complications – in Phillips’ upcoming Hong Kong auction, we now focus on a crowd favourite when it comes to complications, the chronograph.

We look at eight chronographs that stand out in The Hong Kong Watch Auction: XV. They range from an esoteric Patek Philippe made for an English football club owned by a Thai duty-free shopping magnate to and a fine specimen of the mythical Omega Speedmaster “MIR-90 90 Days” that spent three months on the Russian space station.

Registration for bidding and the catalogue can be found here. 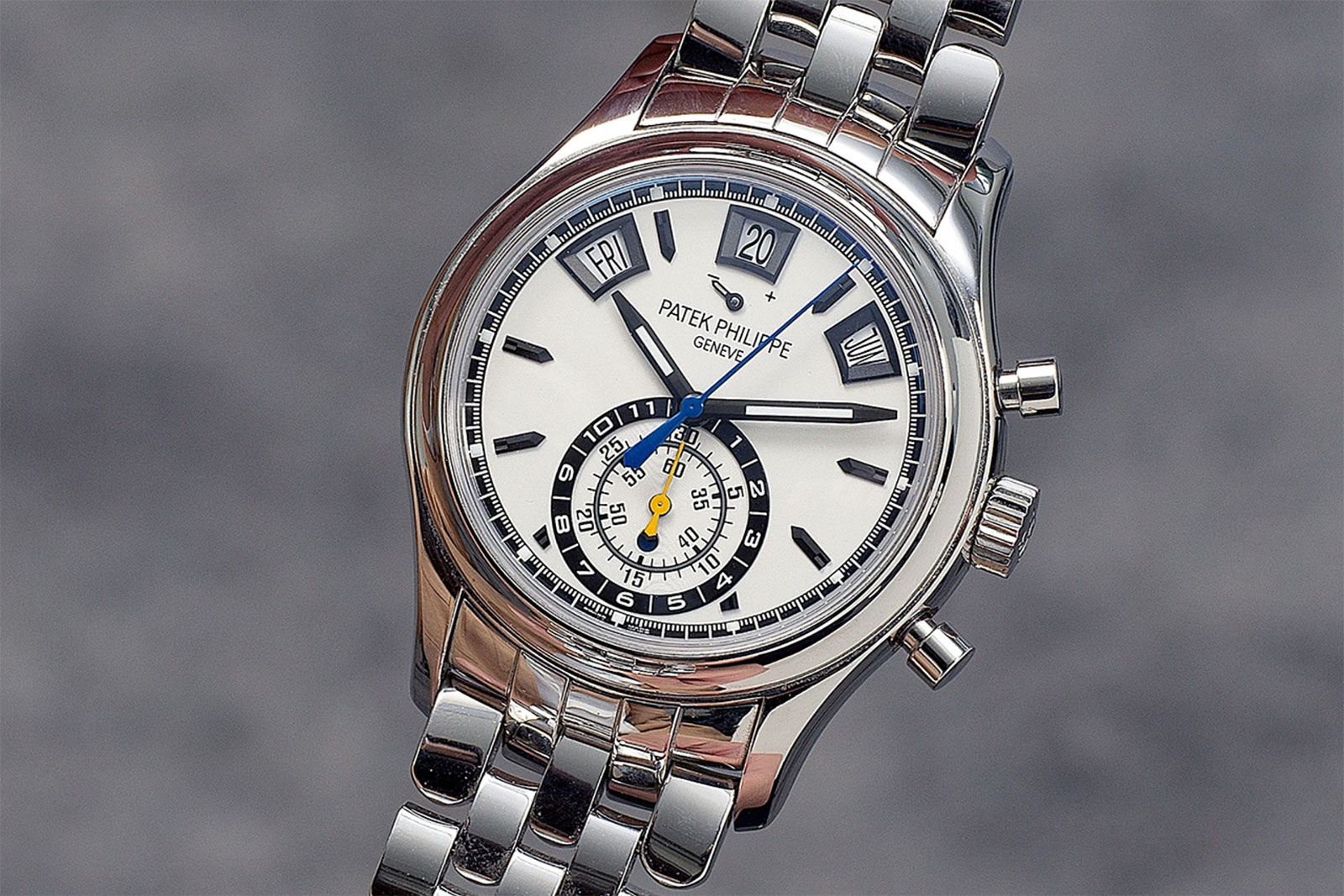 The Patek Philippe ref. 5960/1A-011 made in 2016 to commemorate Leicester City becoming Premier League champions for the first time

Since its introduction in 1999 as Lange’s first chronograph, the Datograph is of the German brand’s most iconic timepieces. Even independent watchmaker Philippe Dufour famously fawns over the movement – he owns an example in rose gold – that is a masterpiece of impeccable craftsmanship and attention to detail.

This example is a first-generation model with a 39 mm platinum case and a glossy black dial, arguably the quintessential Datograph. 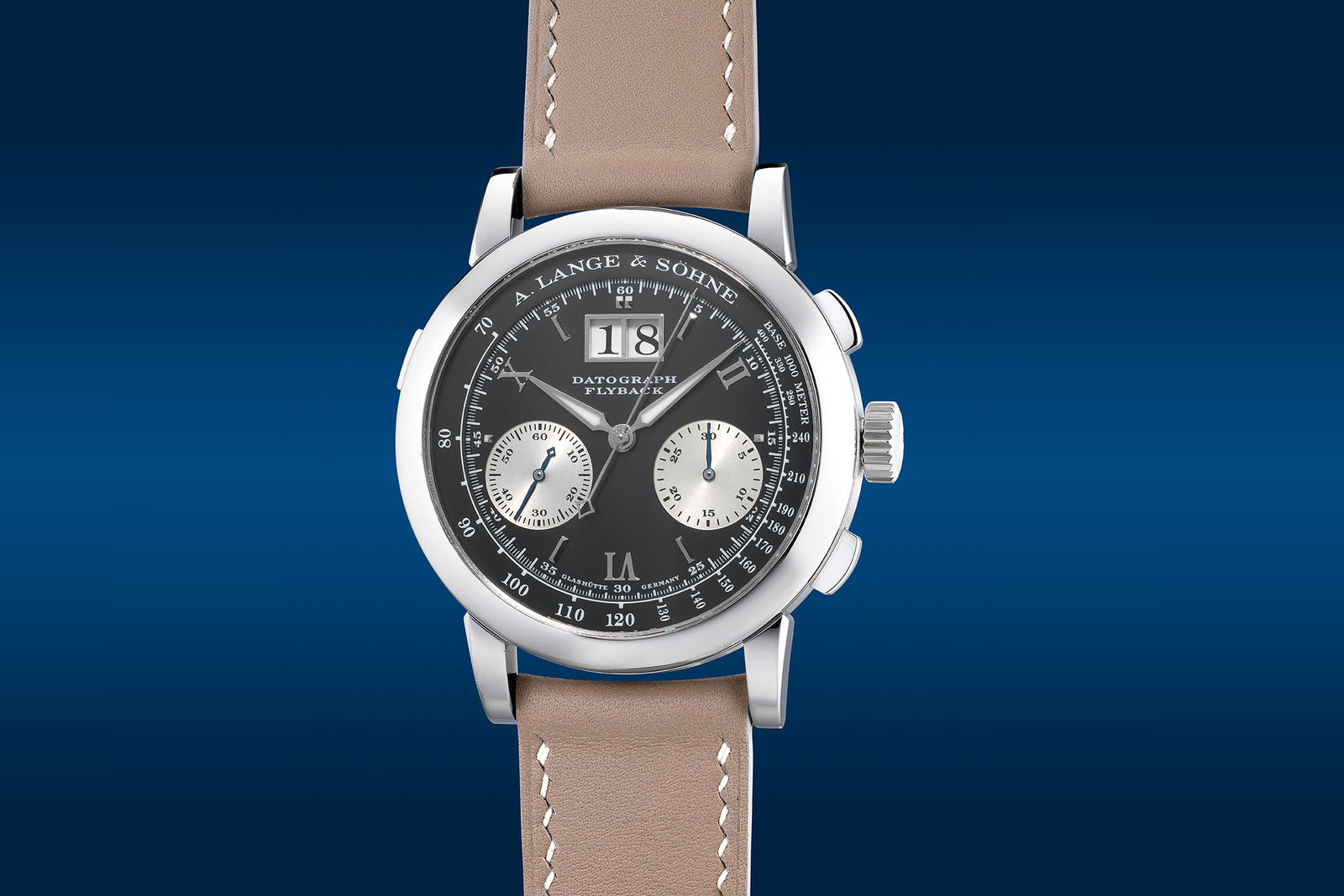 Keen-eyed collectors will notice “METER” on the tachymeter scale, indicating this is one of the earliest examples of the model. The warranty confirms that with a 2001 purchase date. Lange began using “METERS” for the scale in 2005, which lasted until the model’s discontinuation in 2012. 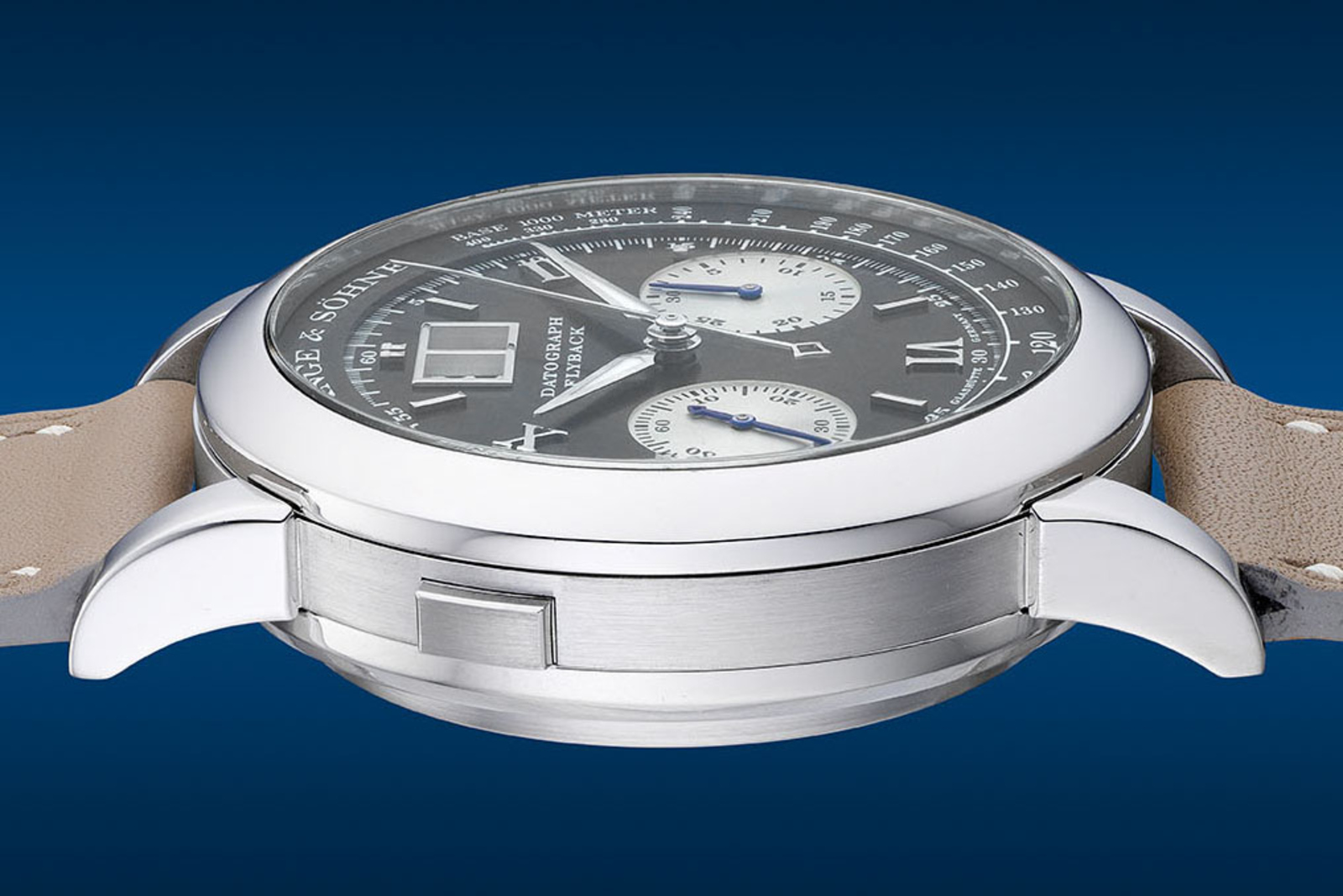 But of course the star of the show is the L951.1, a hand-wind chronograph movement with both an instantaneous minute counter as well as a flyback, which allows the chronograph to be reset without stopping it – a useful feature for anyone else who needs to record sequential elapsed times in quick succession.

More than the technical features of the movement, its appeal lies in the visuals – the colours, materials, and depth give it an appearance practically unmatched even two decades later. 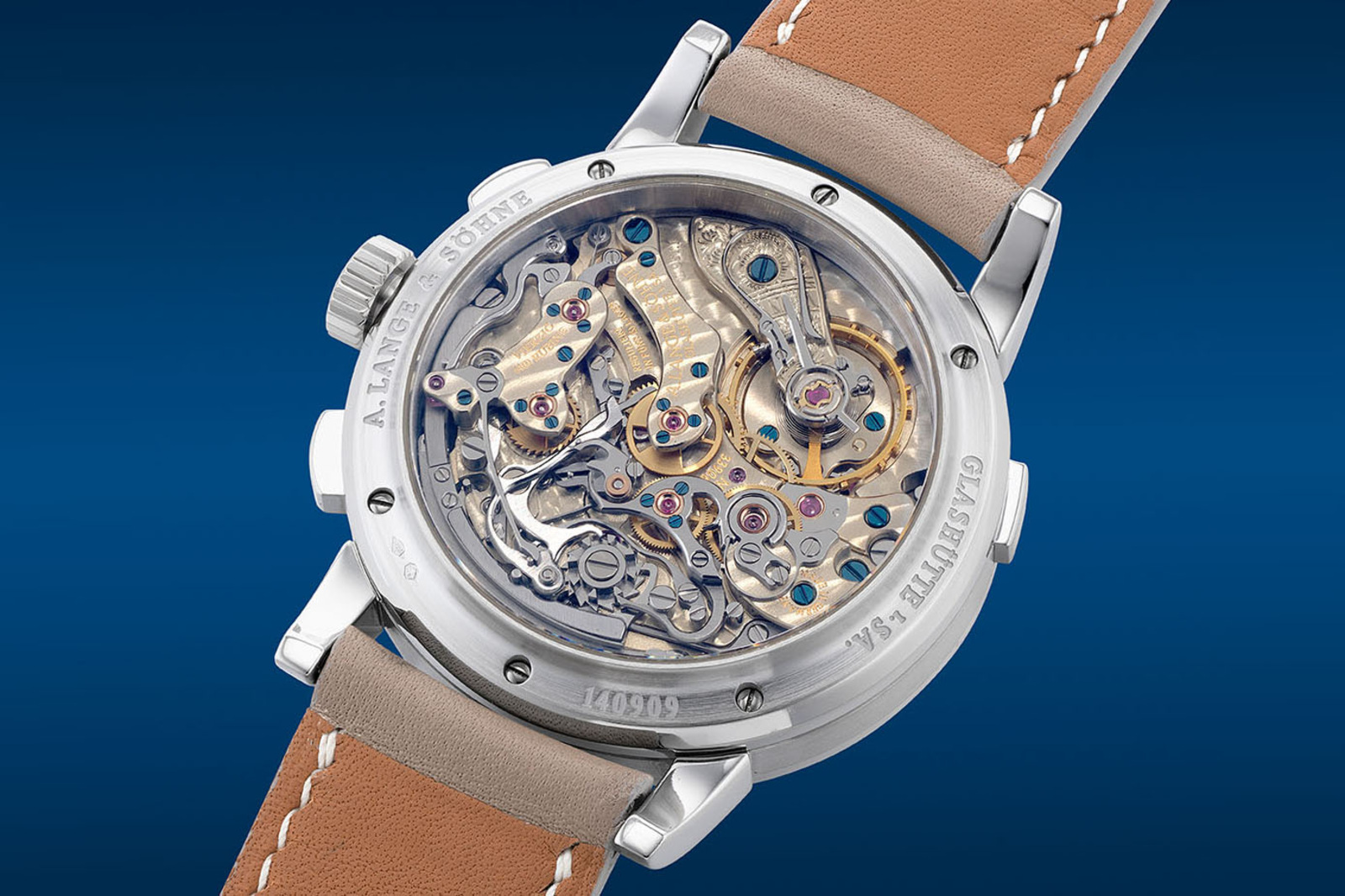 While the eyes of the world are now focused on the World Cup in Qatar, this watch tells another story of champion football (or soccer if you’re American). It was conceived to commemorate the achievement of a once-struggling English football club clinching its first-ever championship in the English Premier League.

In the 2015-2016 season, Leicester City Football Club pulled off one of the greatest sporting upsets of all time by winning the Premier League. It was a remarkable achievement for a team that had been languishing near the bottom of the league table for most of the previous decade, and started the season with bookmakers offering odds of 1-5,000 that it would win. But win it did. And to celebrate this landmark achievement, the club’s billionaire owner, the late Vichai Srivaddhanaprabha, commissioned Patek Philippe to create a limited edition of the ref. 5960/1A that gifted to the club’s staff, players, and coach.

The founder of King Power, the largest duty-free retailer in Thailand, Srivaddhanaprabha was also known to be a watch collector and a client of Patek Philippe. He bought the club in 2010 but tragically passed away in 2018 when his helicopter crashed as it was leaving the Leicester City stadium.

Srivaddhanaprabha’s creation was based on the standard ref. 5960/1A. It has the same 40 mm steel case fitted with the distinctive “beads of rice” bracelet as well as the same white dial. But its hands are unique to this edition and rendered in the club’s colours of blue and yellow. On its reverse, the transparent sapphire back is printed with a fox, the emblem of Leicester City. Just as with the standard model, this ref. 5960/1A is powered by the cal. CH 28-520 C movement has a power reserve of 55 hours. 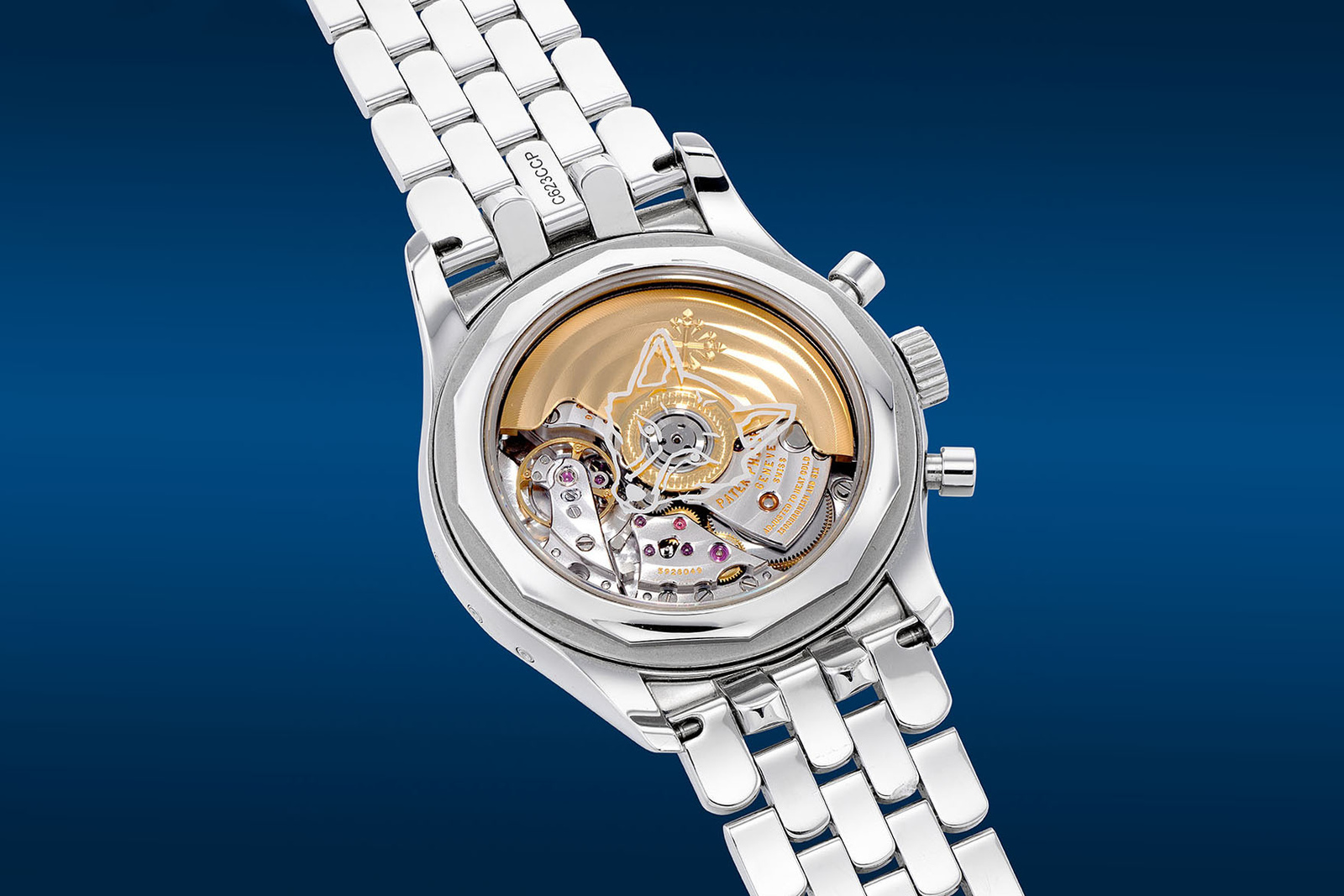 Introduced in 2013, the 1815 Rattrapante Perpetual Calendar is notable for being one of the few watches to combine a rattrapante chronograph with a perpetual calendar. Featuring a pocket watch aesthetic typical of the 1815 line, it’s a classically styled that will please traditionalists. And because it’s not quite as well known as its more famous cousins like the Datograph or Zeitwerk, it is something of a value buy on the secondary market. 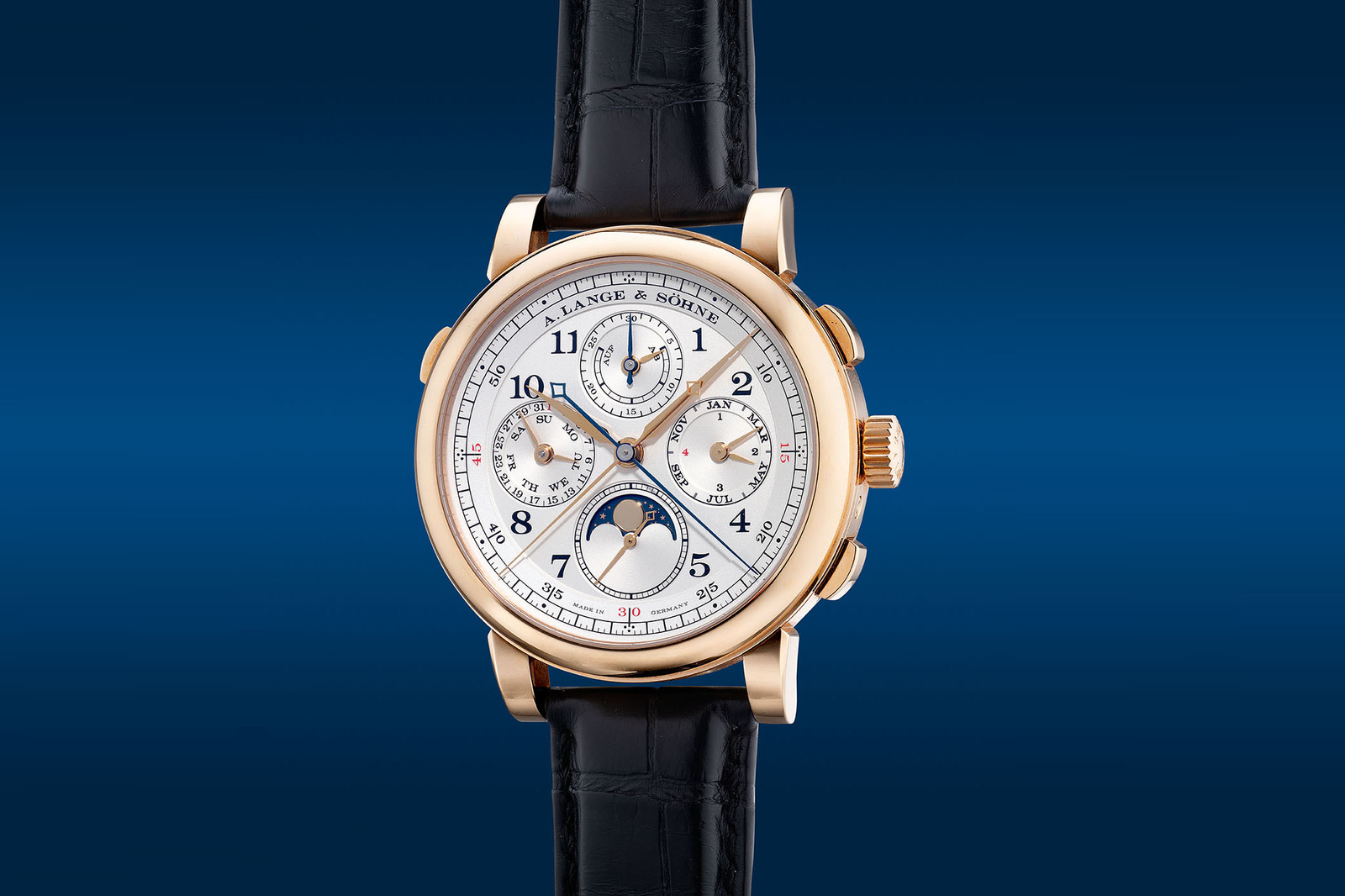 Though the back you can admire the L101.1 comprising 631 parts with the typical Lange hand finishing and hand engraving. Notably, the calibre comes from noble lineage: it is derived from the movement in the top-of-the-line Tourbograph, so the technically-minded will see a resemblance between the two. 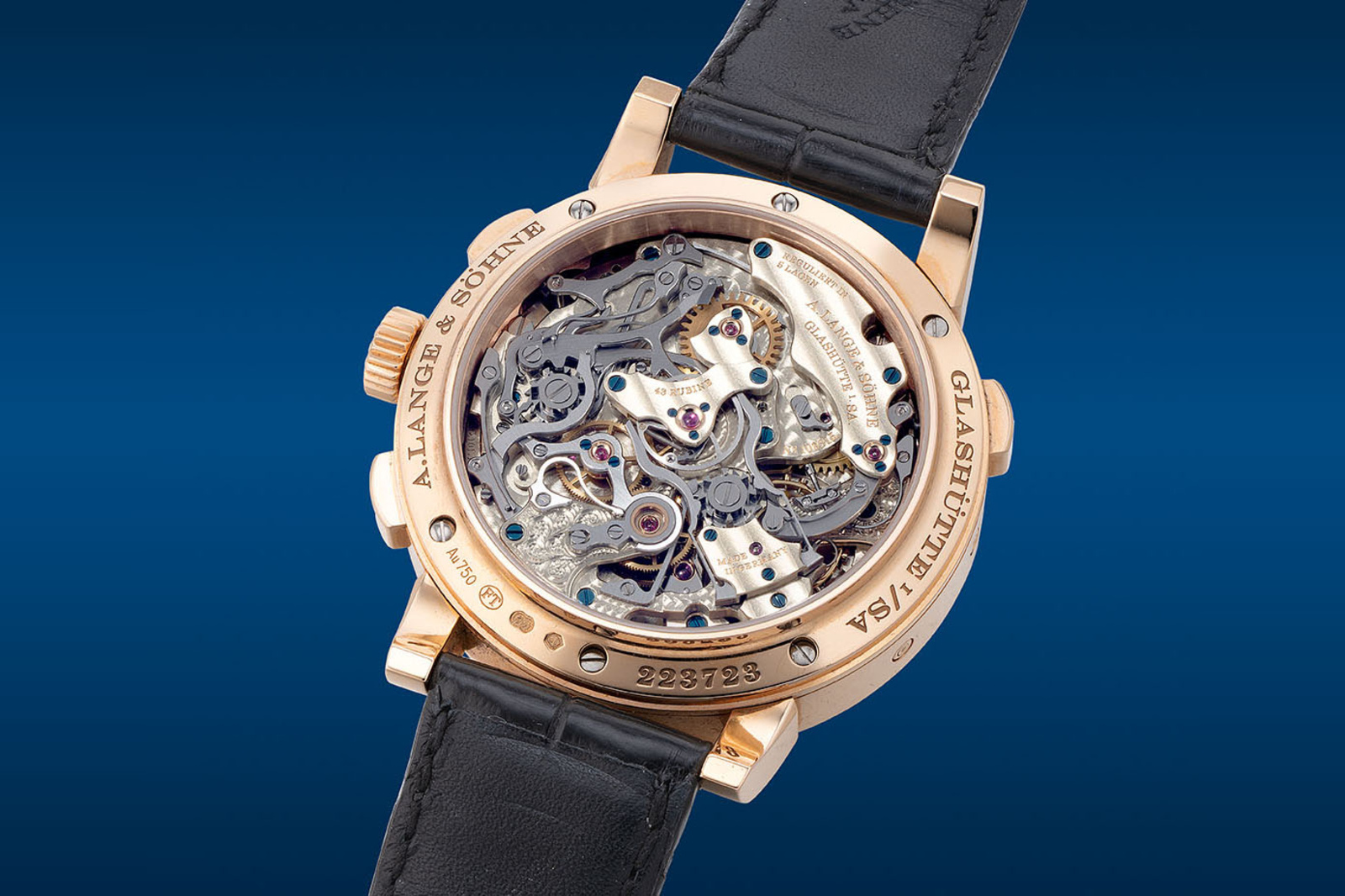 As is the norm for traditionally constructed split-seconds chronographs, this movement has double column wheels. One controls the chronograph, and the other the rattrapante function that is activated by a button at ten o’clock. Added on top is the perpetual calendar module that is set via recessed pushers in the case. This example is in excellent condition with minimal wear and is accompanied by its presentation box and papers.

Undoubtedly one of the highlights of the sale for its historical provenance, the Speedmaster “MIR-90 Days” was one of a handful of Moonwatches that flew in space for 90 consecutive days.

On December 2, 1990, the crew members of the Russian Soyuz TM-11, cosmonauts Viktor Afanasyec and Musa Manarov, along with Toyohiro Akiyama, a Japanese broadcast journalist, blasted off on the 11th expedition to the Russian space station known as Mir (Russian for “peace”). 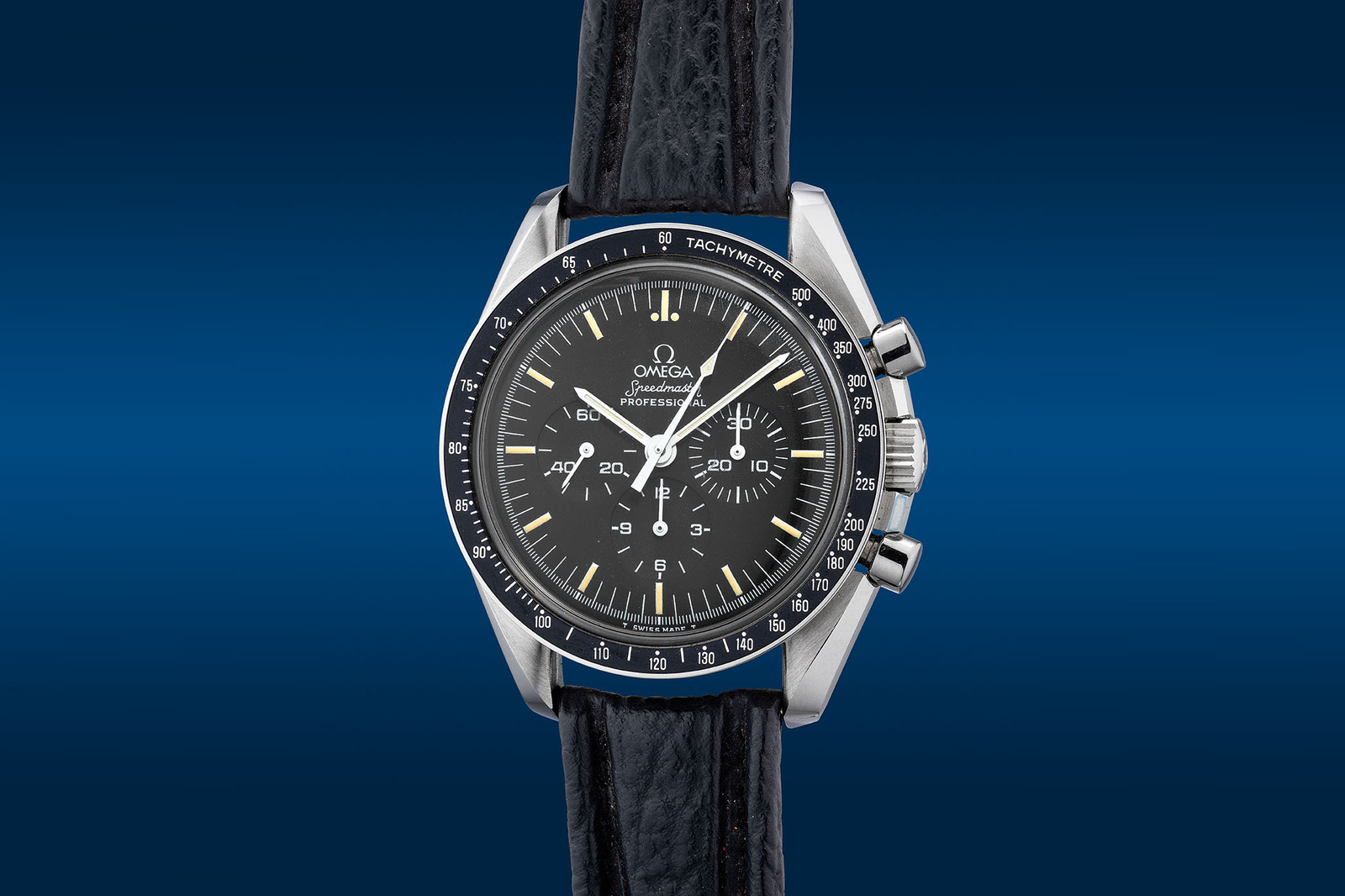 Along for the trip were ten Omega Speedmasters that were intended as an experiment to determine the functionality of a chronograph and its components after a extended, continuous periods in zero gravity. These timepieces were first delivered to the European Space Agency (ESA) in the late 1980s before being sent on the expedition.

Although it went to space, this is still a typical Speedmaster Professional on the front with the distinctive “twisted” lugs and tachymeter bezel. Only on the back does it tell the full story with an engraved dedication that reads “90 DAYS FLIGHT QUALIFIED – SPACELAB MIR DEC.90-MAR. 91.” 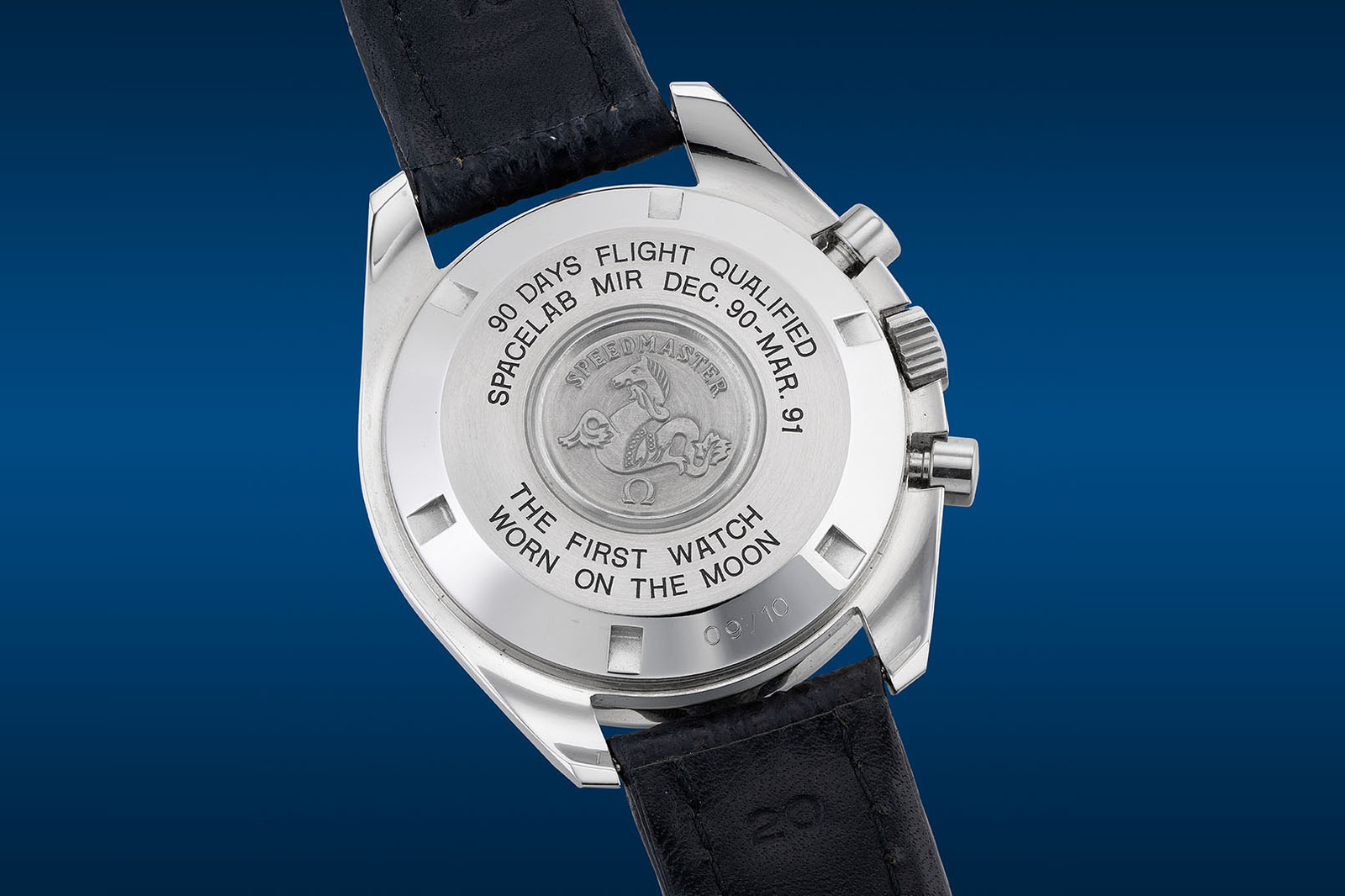 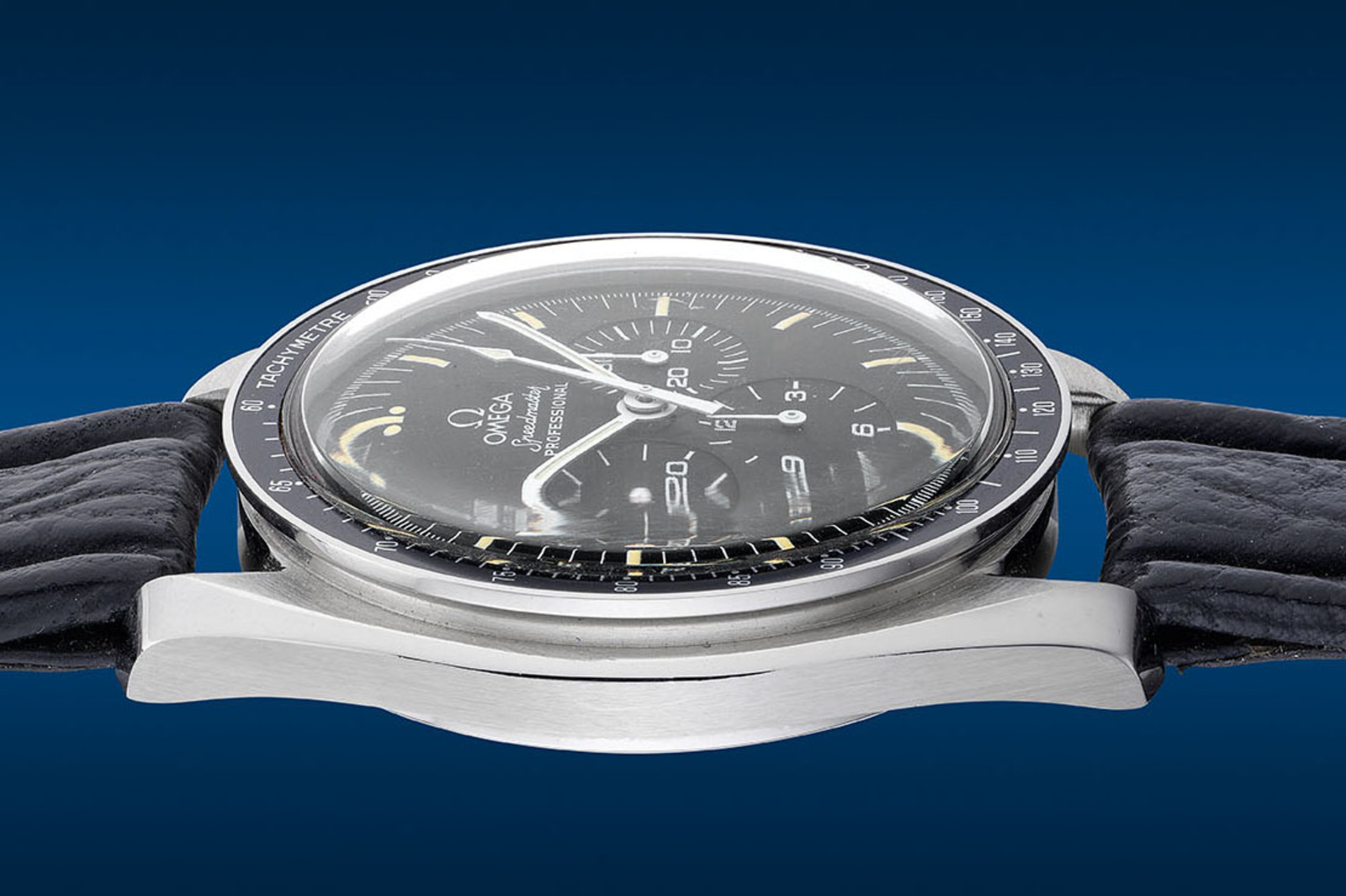 This watch includes the original box bearing a medallion of the Soviet space agency. It’s in “new old stock” condition, having been in storage for almost 32 years. It has notably crisp lines on the case that are practically as sharp as they were when it left the factory. A technical virtuoso whose creations have garnered acclaim, François-Paul Journe is best known for his classically-styled watches with inventive complications, namely the Chronomètre à Résonance and Tourbillon Souverain. But he has long applied his brand of watchmaking to sports watches with the launch of the aluminium Centigraphe in 2011.

This example on offer is the latest generation of F.P. Journe’s trademark sports chronograph that does without the rubber caps on the bracelet links that characterised the earlier versions. It’s in rose gold, case and bracelet, and a large 44 mm in diameter, but with a sleek profile that’s typical of the brand. As with all versions of the Centigraphe, it has the signature lightning seconds at 10 o’clock, featuring a hand that completes one revolution every second. This, in theory, allows the wearer to measure elapsed times of up to 1/100th of a second.

And the chronograph is started, stopped, and reset with the “rocker” pusher at two o’clock that was designed to allow for quicker activation of the button. Notably, only the precious metal versions of the Centigraphe have the movement base plate and bridges in red gold. The titanium model, on the other hand, has them in aluminium for lightness. If one is looking for a fascinating sports chronograph with a unique design. this should be on your radar. Accompanied by the original box and papers, the F.P. Journe LineSport Centigraphe is offered in a like new condition. It carries an estimate of HK$630,000-1.25 million, or about US$80,800-160,000.

Two of the best value propositions in our selection are both Audemars Piguet (AP) chronographs, though unsurprisingly neither is a Royal Oak. The first is an Edward Piguet Chronograph, an example of AP’s rectangular form watch that was in production until the early 2000s.

Named after one of the brand’s founders, the Edward Piguet was an attempt to break out of the Royal Oak stereotype, but ultimately unsuccessful commercially. But two decades on – and at much less than its original retail price – the Edward Piguet looks pretty good.

While it doesn’t have the iconic status of the Cartier Tank or Jaeger-LeCoultre Reverso, it is an appeal, thoughtful design and in its chronograph variant, equipped with a fine movement. The Edward Piguet has a slightly curved case with stepped sides that give it an Art Deco feel. This example is in 18k white gold with a semi-glossy black dial decorated with guilloche. Interestingly the dial has an unusual combination of both Arabic numerals and tablet-shaped markers for the hours.

Importantly, it is powered by the cal. 2385, which is actually a Frederic Piguet cal. 1185. A slim, sophisticated calibre, the cal. 1185 is an integrated, column-wheel chronograph movement that was also used by Vacheron Constantin, Blancpain, and Breguet. Our collaboration with Zenith last year was eagerly awaited and swiftly sold out. Fortunately for anyone who missed out, a like-new example has surfaced in this sale.

As detailed in our launch article, the Chronomaster Revival “Poker Chip” was inspired by the disco-era El Primero G383 that got its nickname from the funky dial design, but reimagined with Super-Luminova on a two-tone grey and black dial. Matched with a striking DLC-coated titanium case, the “Poker Chip” is unlike any other modern-day El Primero, especially on its luminous fabric strap. Like the other Chronometer Revival models, the proportions are vintage – the case is 38 mm just like the 1969 original – but here executed in a modern way in micro-blasted titanium that’s been DLC coated.

And the movement is of course Zenith’s landmark El Primero 400 that’s visible through the open back. As is often the case with Zenith, the “Poker Chip” has much to offer in terms of value, making it ideal for someone seeking an original and well made limited edition chronograph without breaking the bank.

The other value buy from Audemars Piguet is the Jules Audemars Tourbillon Chronographe, a highly complicated timepiece that combines two sought-after complications, the tourbillon and chronograph – for a low estimate of just US$64,100.

First launched in 1982, Jules Audemars was a line of round watches and named after one of the brand’s founders. This watch embodies the traditional Jules Audemars design with a silvered, hobnail guilloche dial featuring pink gold applied numerals. It’s a straightforward expression of classical design that puts the emphasis on the tourbillon at six o’clock. Like nearly all AP complications, the movement was made by Renaud & Papi, the complications specialist known for supplying Richard Mille. This cal. 2889 is both traditional constructed and finished to a high level. The tourbillon features a black-polished steel cage and bridge, while the chronograph has a lateral coupling and column wheel.

But in typical Renaud & Papi style it also has modern-day engineering within, here exemplified by the 72-hour power reserve, an impressive achievement for a movement made almost two decades ago.