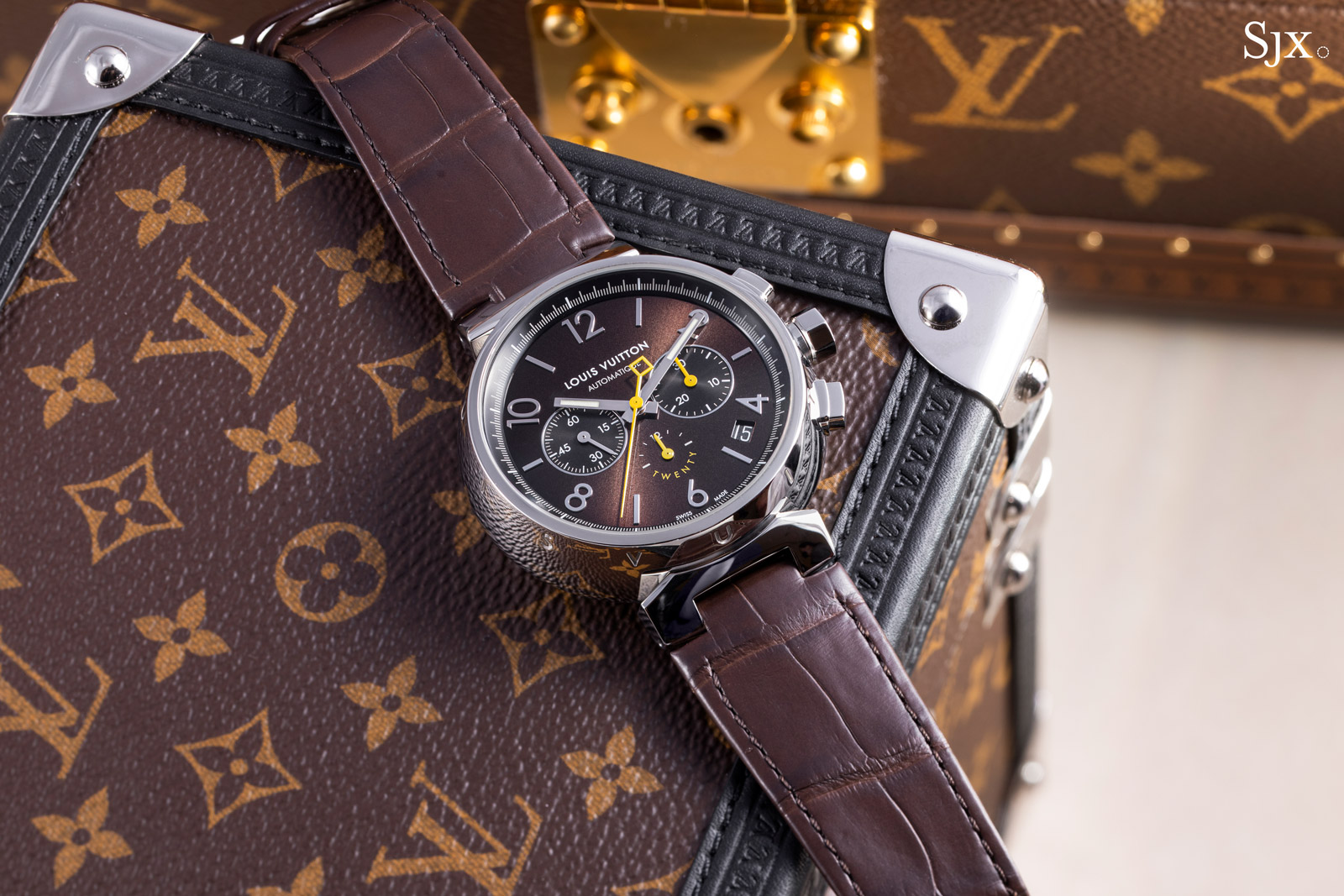 Louis Vuitton is now in its 20th year as a watchmaker. In that time it has gone from basic, ETA-powered watches to a variety of impressive complications, including its signature Spin Time, and even a minute repeater with automaton. To mark the occasion, Louis Vuitton (LV) has just announced the Tambour Twenty Chronograph, a remake modelled on the brand’s first serious mechanical timepiece.

The two-decade journey has seen LV’s watchmaking division evolve from a shared space inside TAG Heuer’s factory to its own expansive facility in Geneva that includes not only a complications workshop but also its own dial-making facility. While LV does make some of its own movements now, the Tambour Twenty is a nod to its origins as a watchmaker. The 200-piece limited edition is modelled on the Tambour LV277 of 2003, the brand’s first chronograph that was powered by the Zenith El Primero. 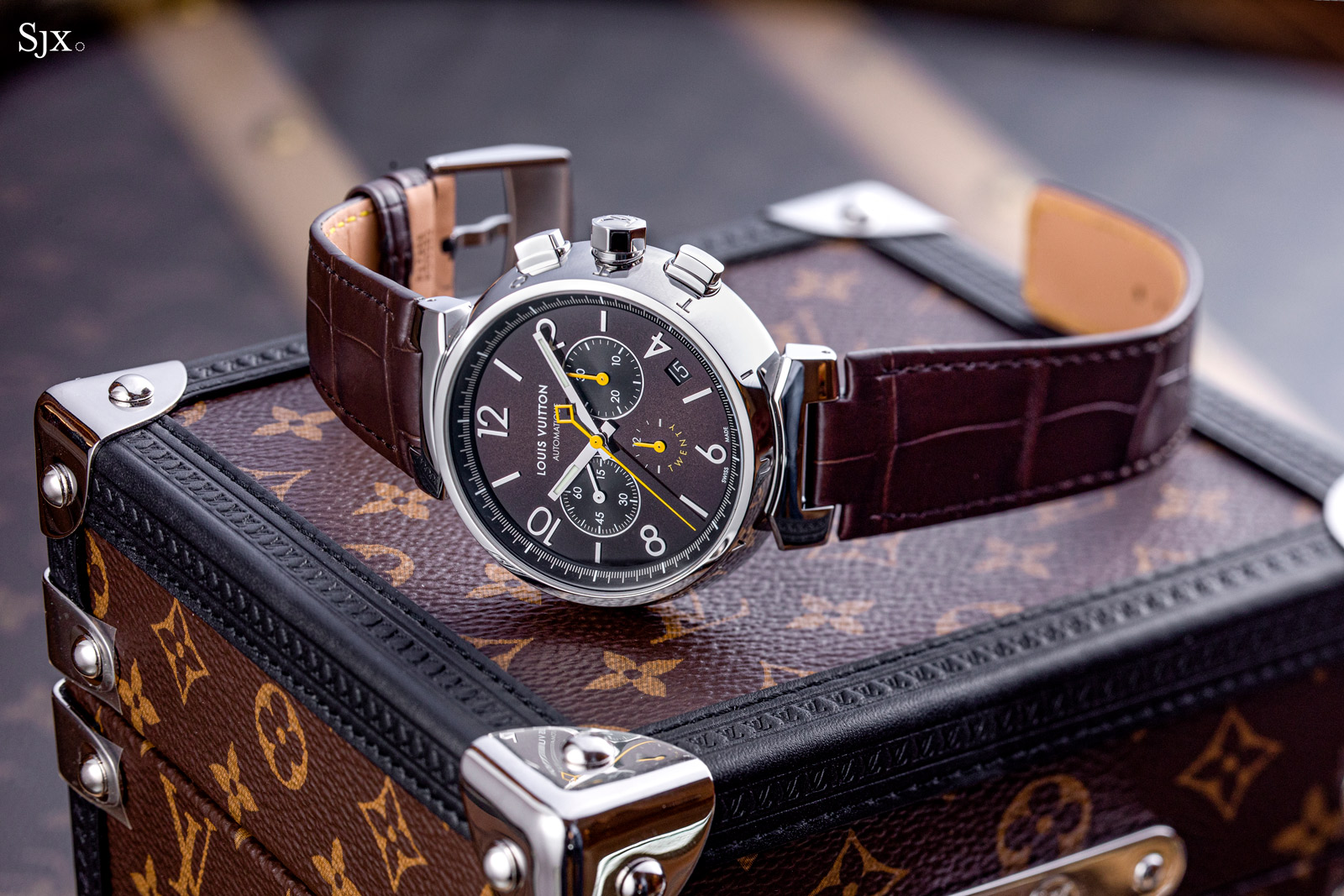 Despite its odd proportions – a big case with tall, sloping sides and narrow lugs – the Tambour case is attractive in my eyes. And it’s distinctive and recognisable although its form is fairly simple. In short, it’s a successful design. The Tambour works especially well with complications since that gives its size – especially its thickness – a sense of purpose. 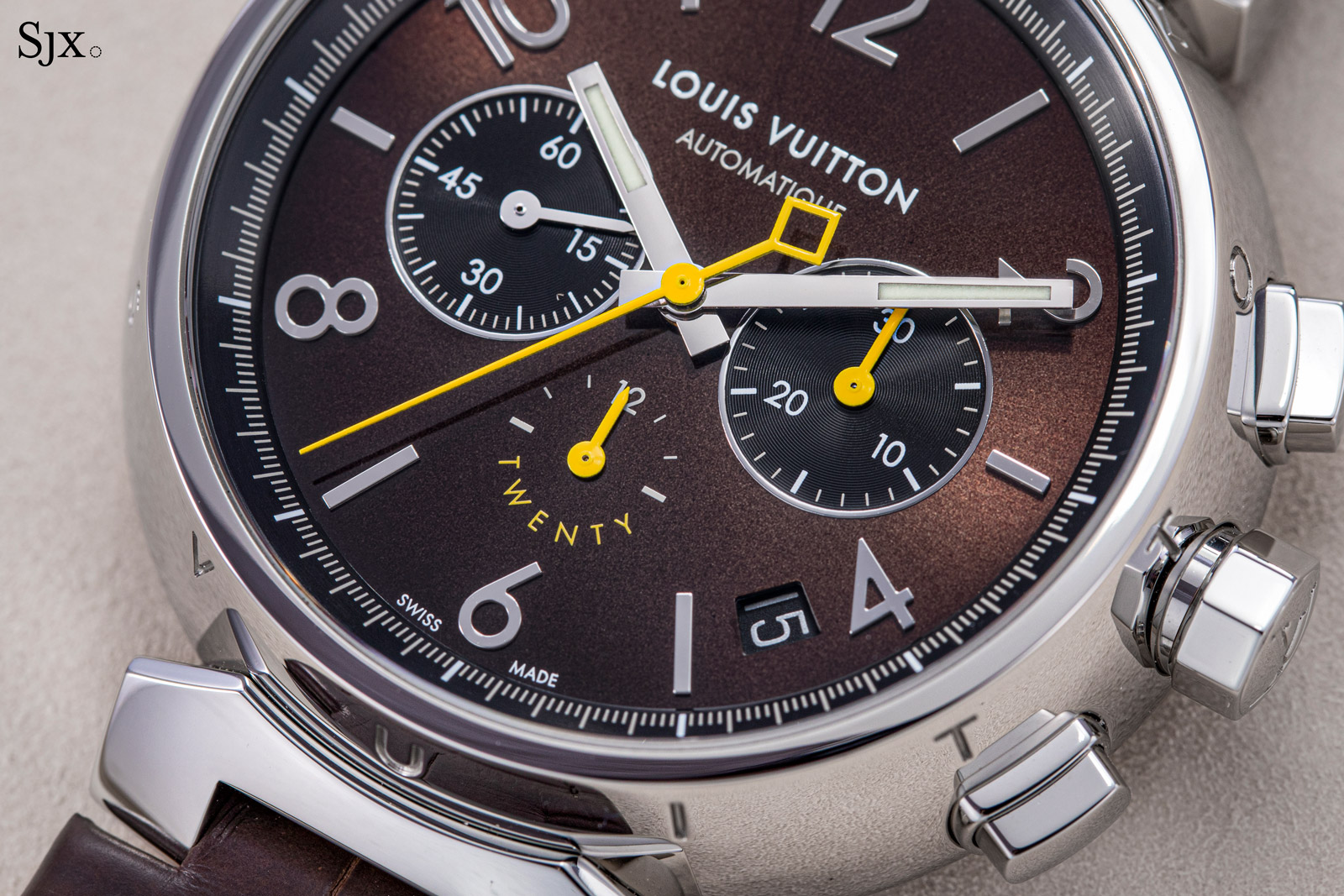 Ordinarily I am not a fan of brown dials, but this is one of the few dials in the colour that looks good. LV executes its dials well – most of them are made in-house – and the reflective metallic brown on the dial is both nuanced and striking. At some angles it’s a muted, dark hue but when it catches the light just rich it’s a rich, reddish-brown.

Notably, the anniversary branding on the dial is inconspicuous. That runs counter to the usual LV branding, which is obvious. That would usually be a good thing, but here it leaves little to set this apart from the run-of-the-mill Tambour chronograph containing an ETA movement.

Like the very first LV chronograph, the Tambour Twenty is powered by the El Primero, a storied movement that’s been dressed up slightly more than usual so the view from the back is more attractive than for the typical El Primero. 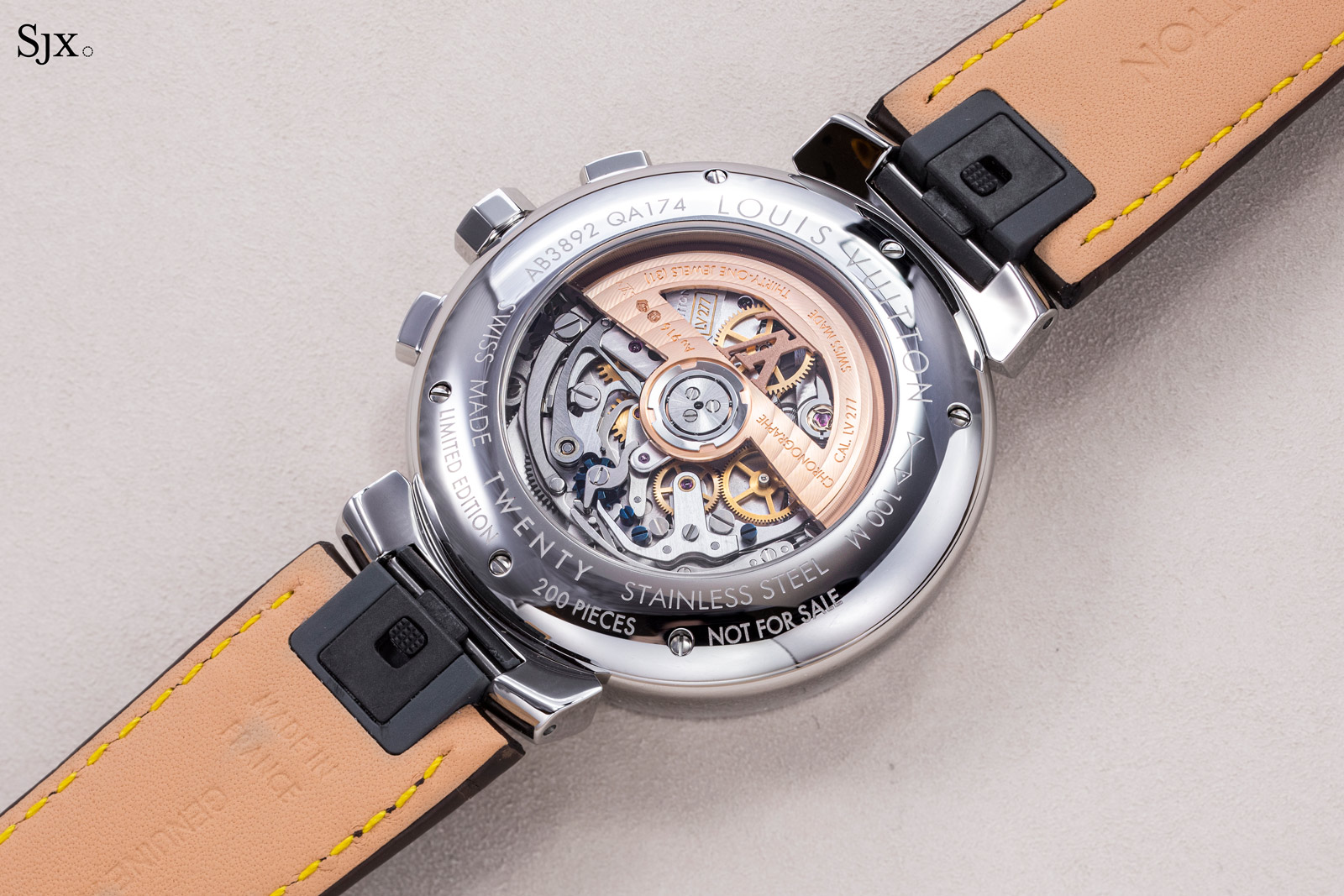 I like everything about the watch except the price of US$17,800, which is steep, but not exactly.

The Tambour Twenty is not only an El Primero chronograph with a steel case. Like all fancier LV watches, it is delivered in a trunk, one that’s mini in size but nonetheless a full-fledged trunk covered in monogram canvas with brass corners and hinges.

Comparably sized trunks cost about US$4,500 according to LV’s online store, so the box presumably accounts for almost a third of the retail price, which helps justify a good portion of the price. 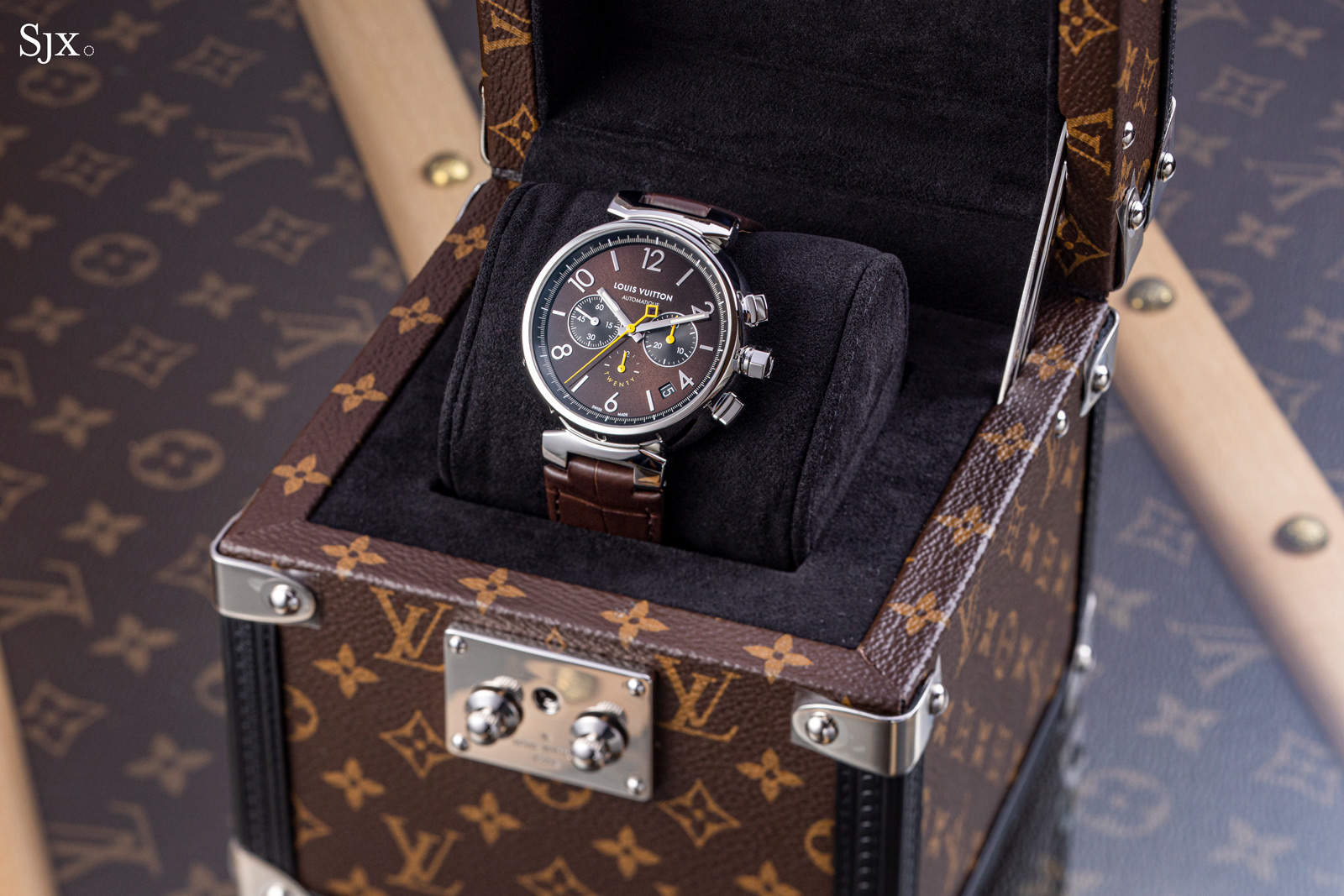 The mini trunk is far nicer than majority of watch boxes, but it is still just a box for a single watch. So it has little use being being a decorative object. I would prefer the watch sans box for a third less, but the trunk is an integral part of the Louis Vuitton proposition so there’s no escaping it. 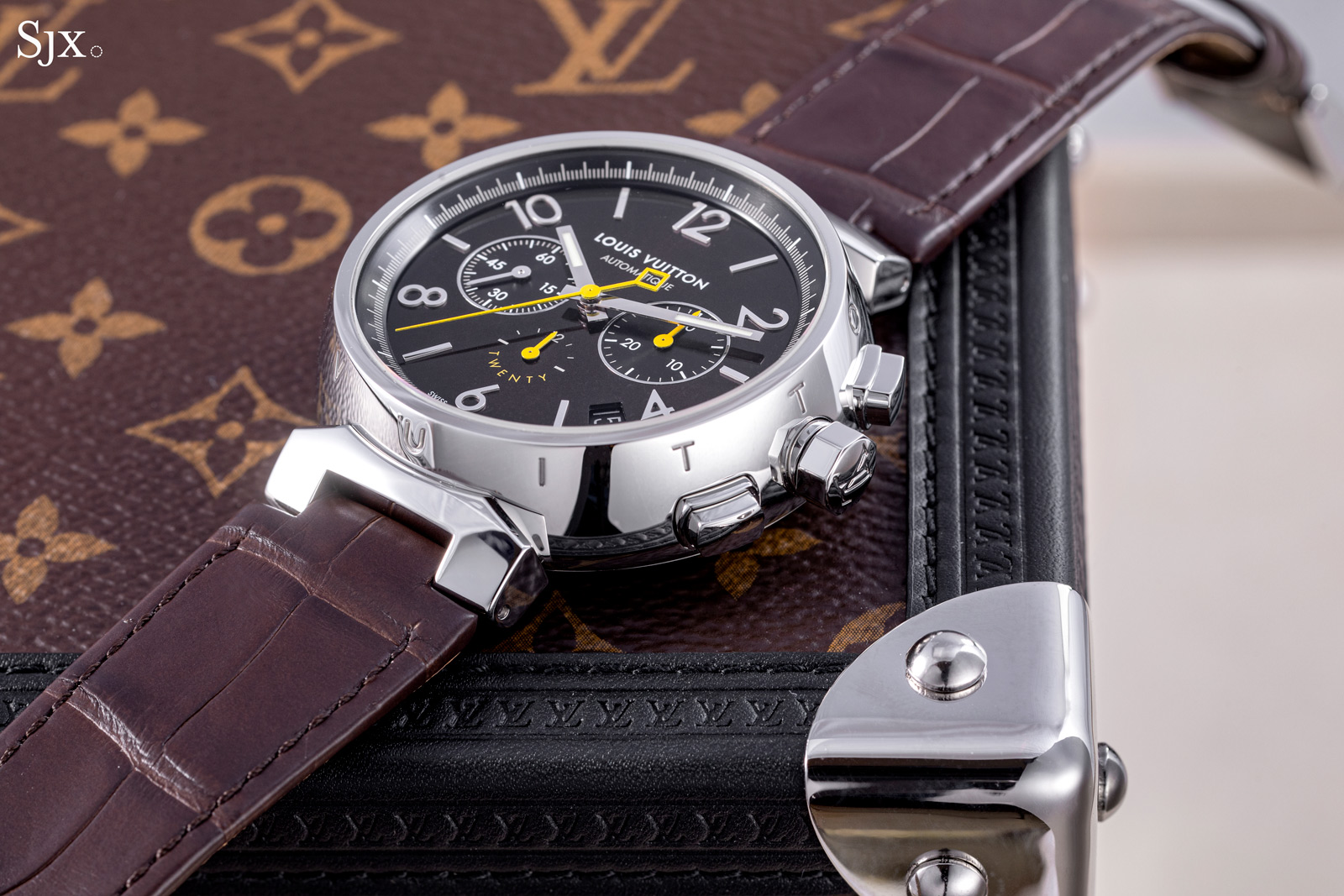 LV began its watchmaking division in 2002 in a modest manner by taking a space within TAG Heuer’s premises in La Chaux-de-Fonds. A year later, LV turned to another LVMH company for movements, which resulted in the COSC-certified Tambour LV277 Chronograph powered by the Zenith El Primero. Notably, it was around the period that a few notable brands also began using the El Primero movement for their automatic chronograph offerings, including Parmigiani in 2000 and Daniel Roth a few years before.

A decade later the division moved to Geneva and into the expanded La Fabrique du Temps (LFDT), which LV has acquired just the year before. With LFDT, LV has the capability to create movements far more complex than the El Primero, but the venerable chronograph movement is appropriate for an anniversary edition (and perhaps LV had 200 movements in a drawer somewhere). 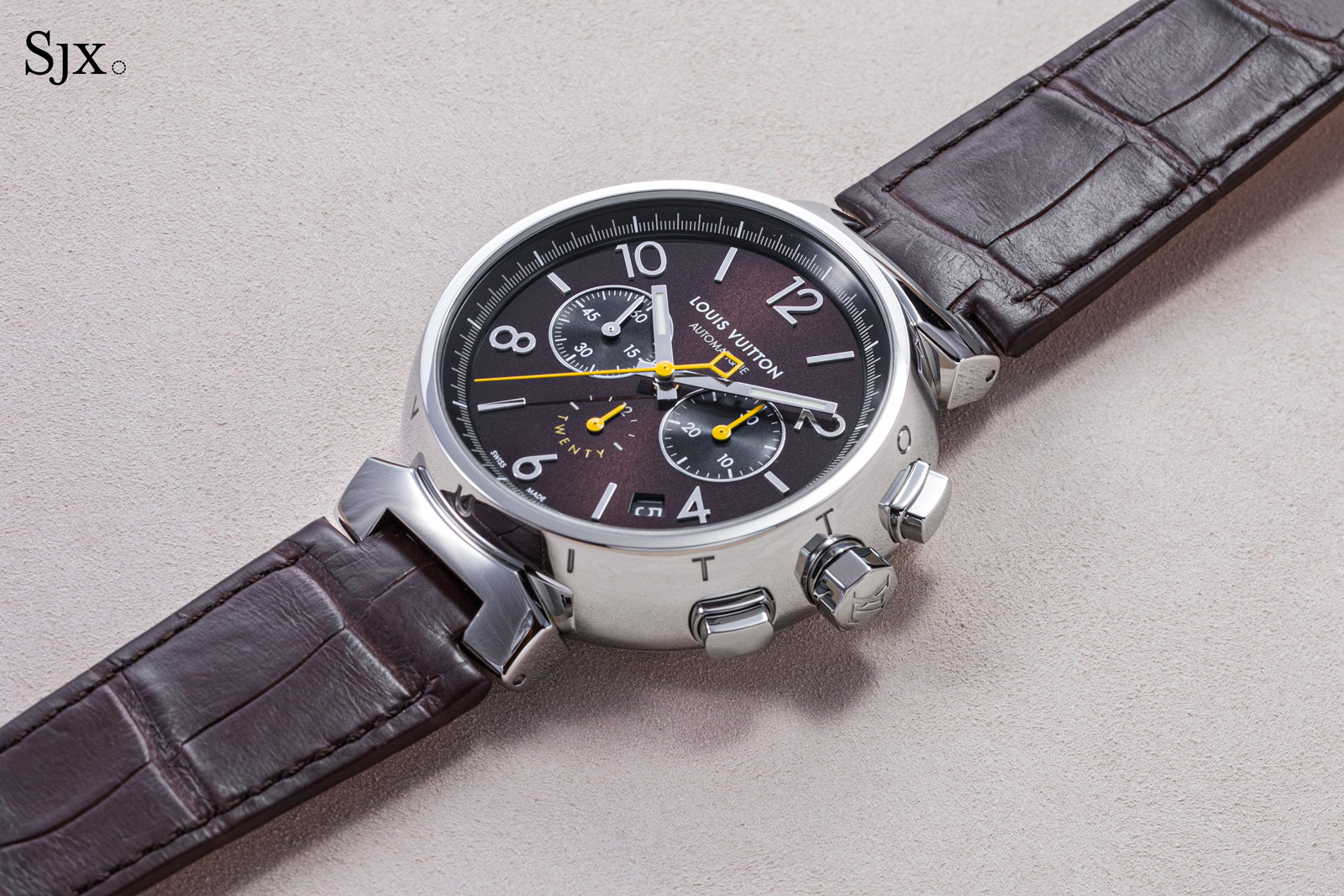 Besides movements, the most impressive aspect of LFDT is the dial-making workshop. Few watch brands have a cadranier in-house, let alone one that is able to precisely machine delicate materials like mother-of-pearl and mineral stone, while also doing miniature painting in acrylic.

The dial workshop also has its own galvanic (and presumably PVD) coating department, which allows LV access to a full spectrum of metallic dial colours. So it’s unsurprisingly that the dial colours found on LV watches are often attractively executed in both finish and colour.

Echoing the colour of LV trunks, the brown dial has a radially-brushed surface with a galvanic finish, resulting in a metallic sheen that catches the light just right. 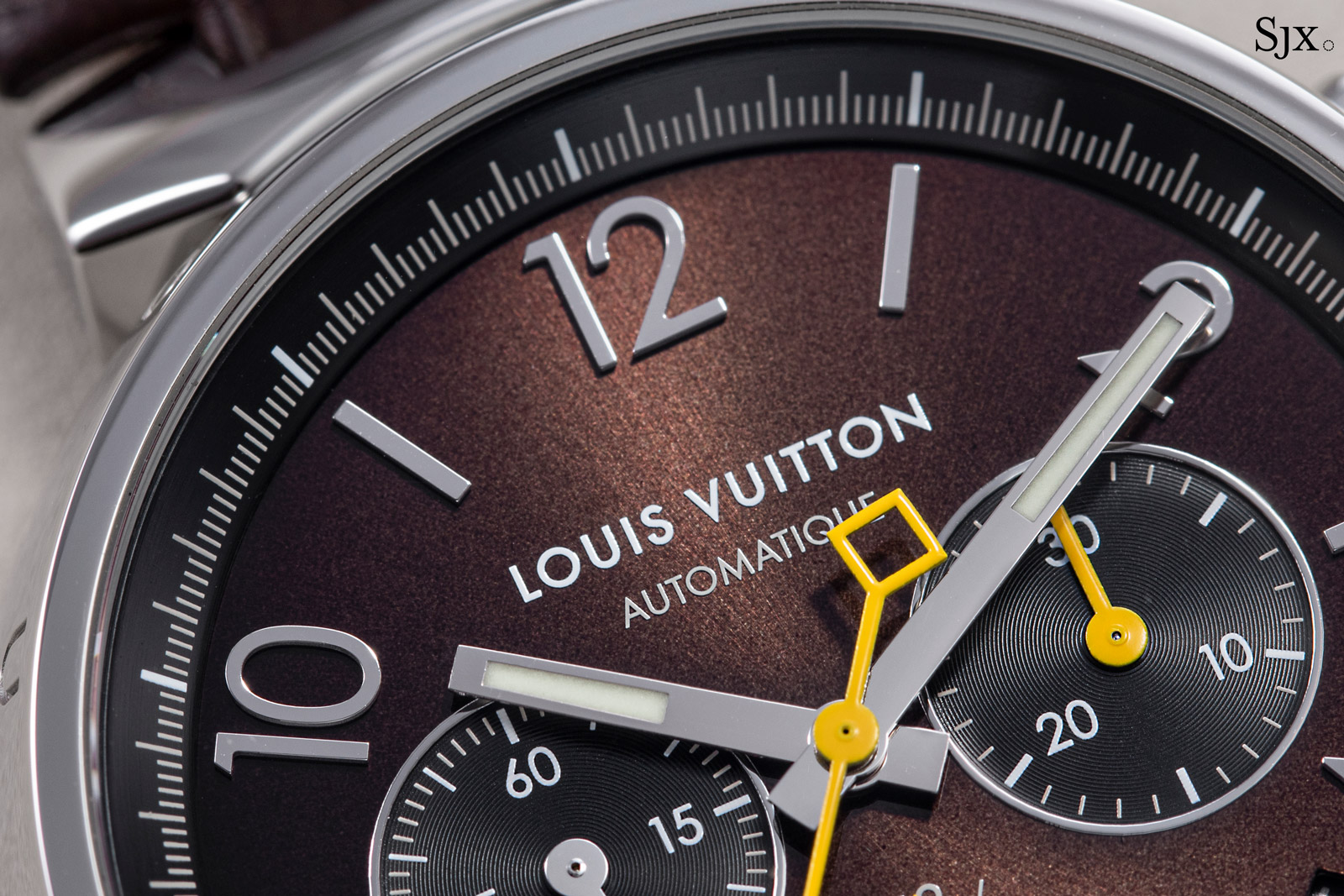 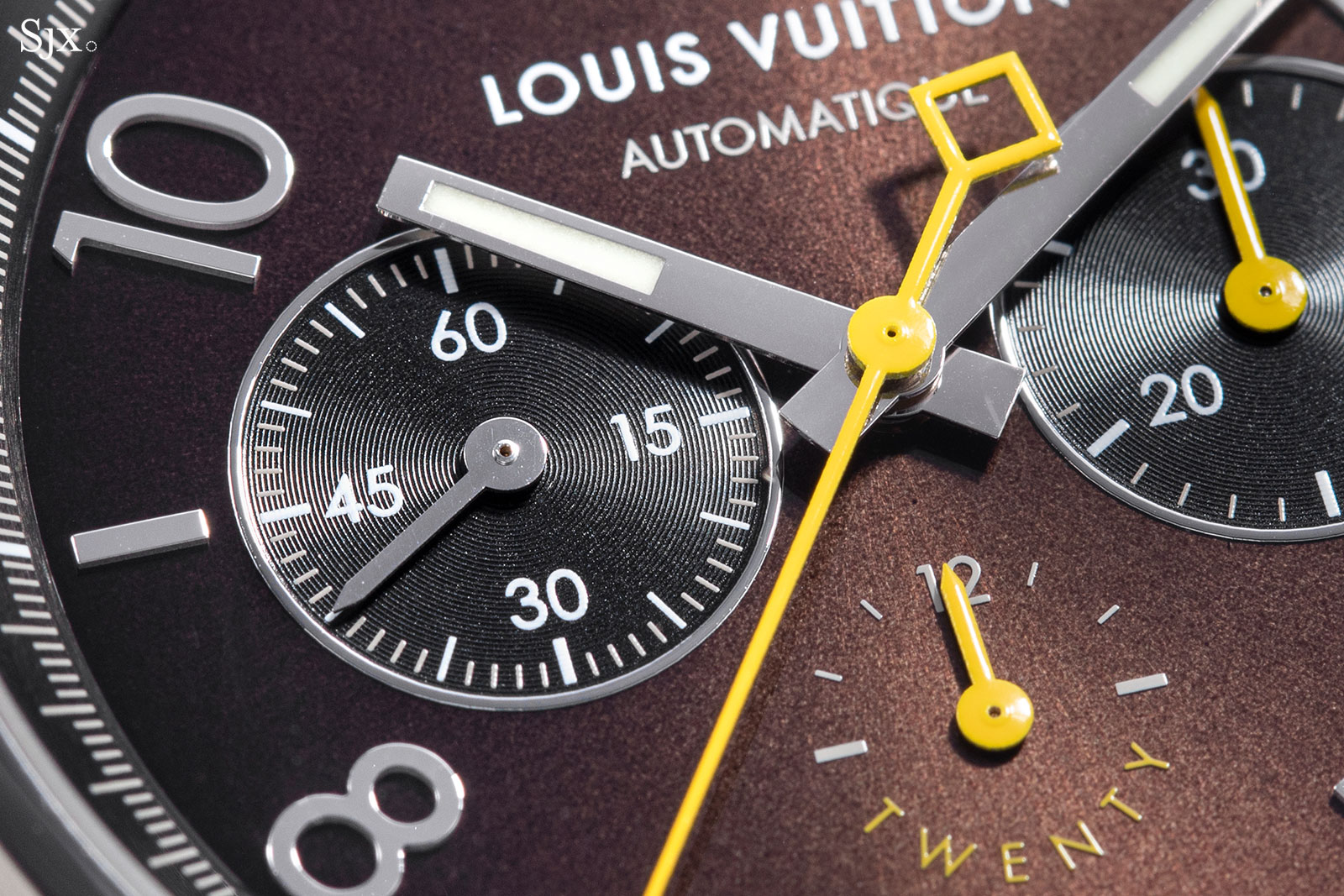 While the dial is excellent, the hands feel a bit too basic. Granted, they reproduce those found on the first-generation Tambour chronograph of 2003, but they still do feel out of place on such a watch in 2022

The dial layout is surprisingly balanced, despite the relatively small movement inside the case. While the two counters at three and nine do sit far from the edge of the dial, the counters themselves are compact so they appear relatively centred on each half of the dial.

At the same time, the camouflaged 12-hour register at six o’clock lightens the visual heft of the lower half of the dial and also serves to balance the two lines of branding under 12 o’clock.

On the subject of branding, the dial is perhaps too subtle in its anniversary notation on the six o’clock register. “Twenty” in yellow is discreet and invisible at a distance, making it difficult to discern between this and the standard Tambour chronograph powered by an ETA movement. 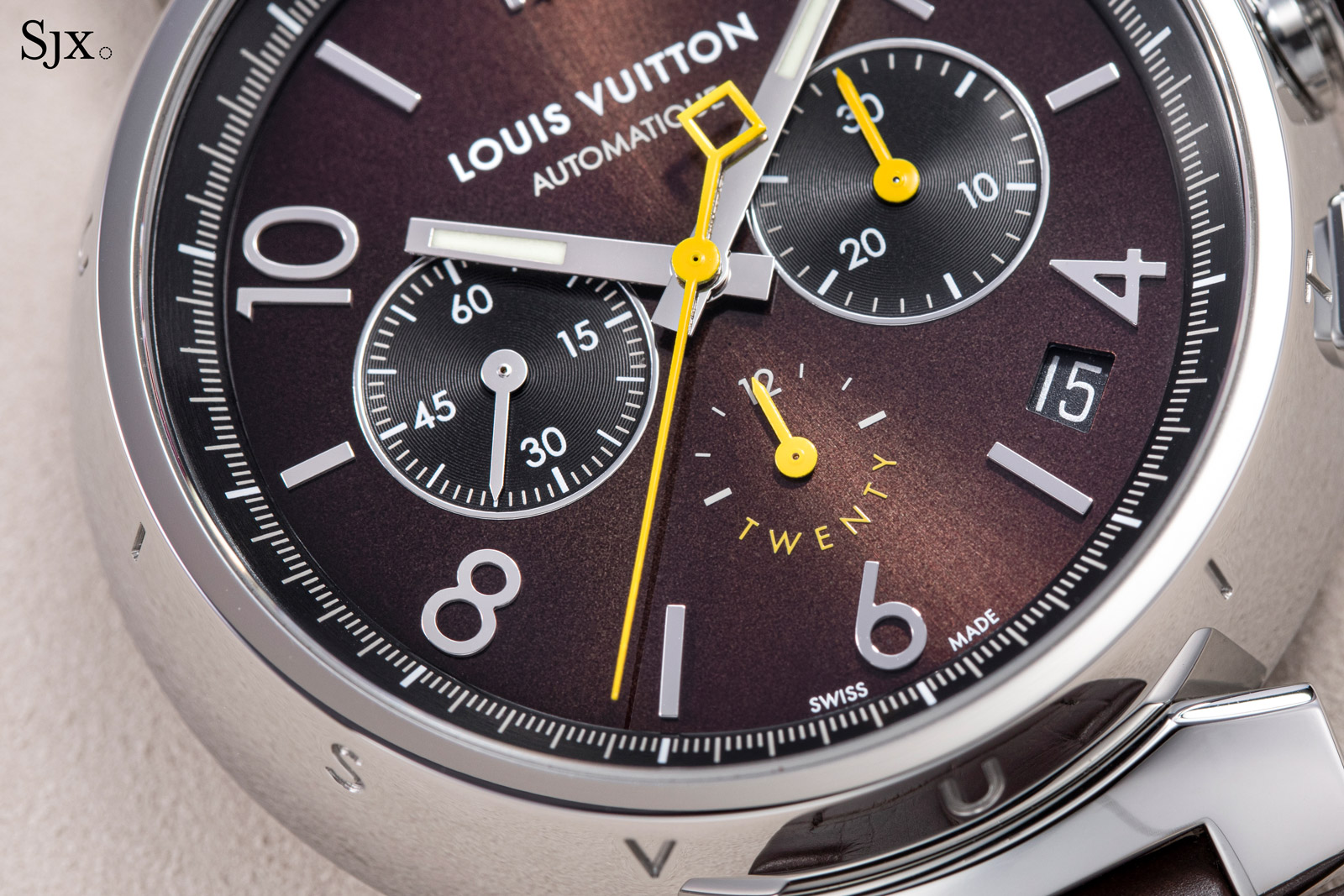 Easily identifiable as a LV design, the case is modelled on a drum, hence tambour, which translates as “drum”. As is typical for LV, the branding on the case is bold – the 12 letters of the brand name are engraved on the case sides – although it is only visible in profile.

The outline of the case is simple, but it is rendered in a high quality manner. The polishing is done well, while the soldered lugs are slightly more challenging to pull off than integral lugs. 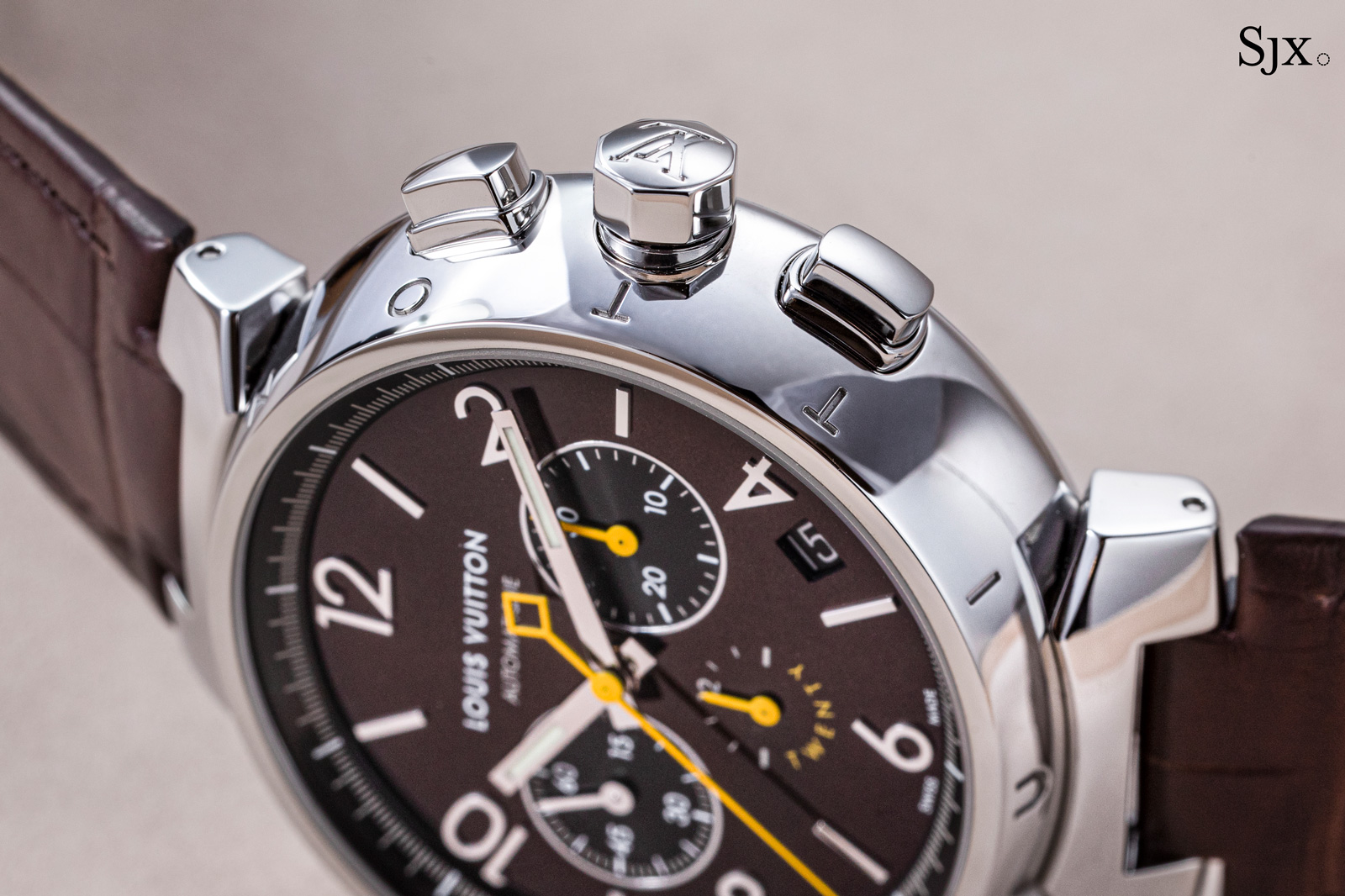 Already a chunky shape, the Tambour case becomes even larger with a chronograph movement inside. It’s 41.5 mm wide and
13.2 mm tall, with the sloping  sides accentuating its thickness.

But the large size works, both visually and ergonomically. This watch has presence on the wrist. Conversely, a scaled-down Tambour loses its character, as evidenced by past attempts to refine the original design. And it wears well, thanks in part to the short, low-set lugs.

What I would have wished for is a changed in materials. Polished titanium, for instance, would be indistinguishable from steel at a distance, but it would be substantially light in hand. That would have been a subtle but meaningful way of differentiating the anniversary edition from its predecessors. 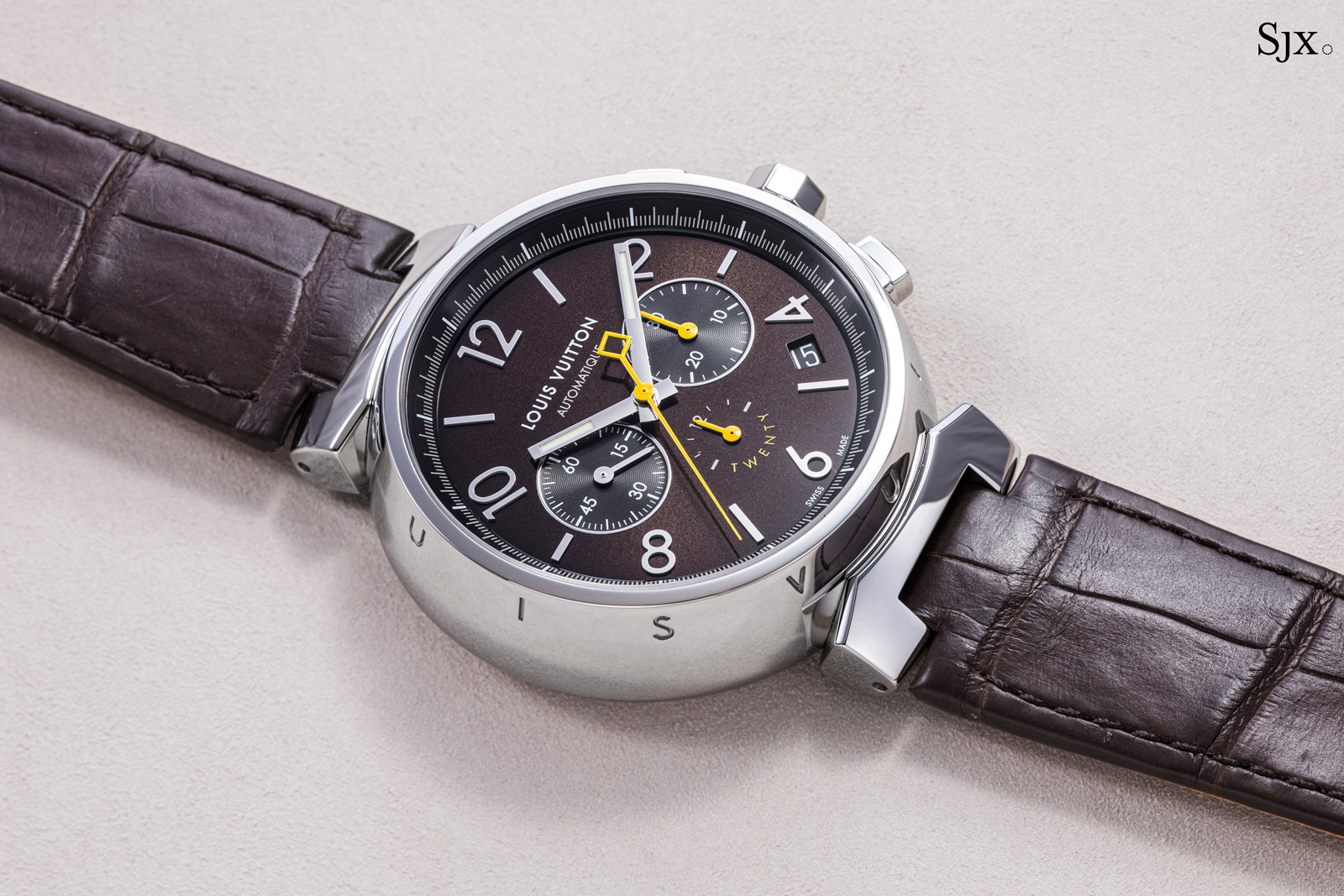 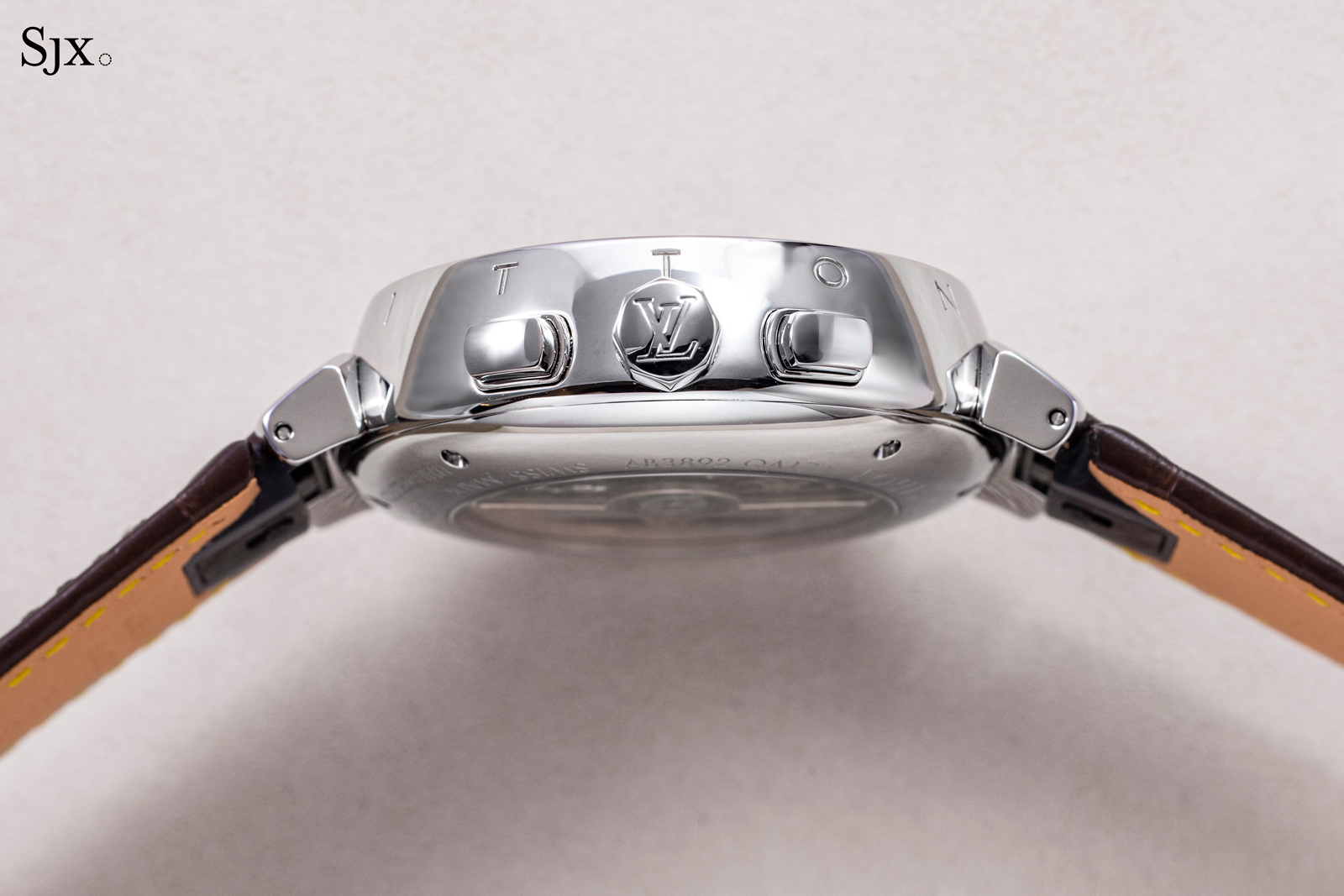 Christened the LV277, the inside looks substantially fancier than the average El Primero, primarily due to the open-worked rotor in 22k rose gold. Besides the rotor, the additional decoration applied to this version of the movement is modest, namely a reworked chronograph bridge with Cotes de Geneve and gilded engraving. But because the rotor occupies half the back, it gives the movement a wholly new look. 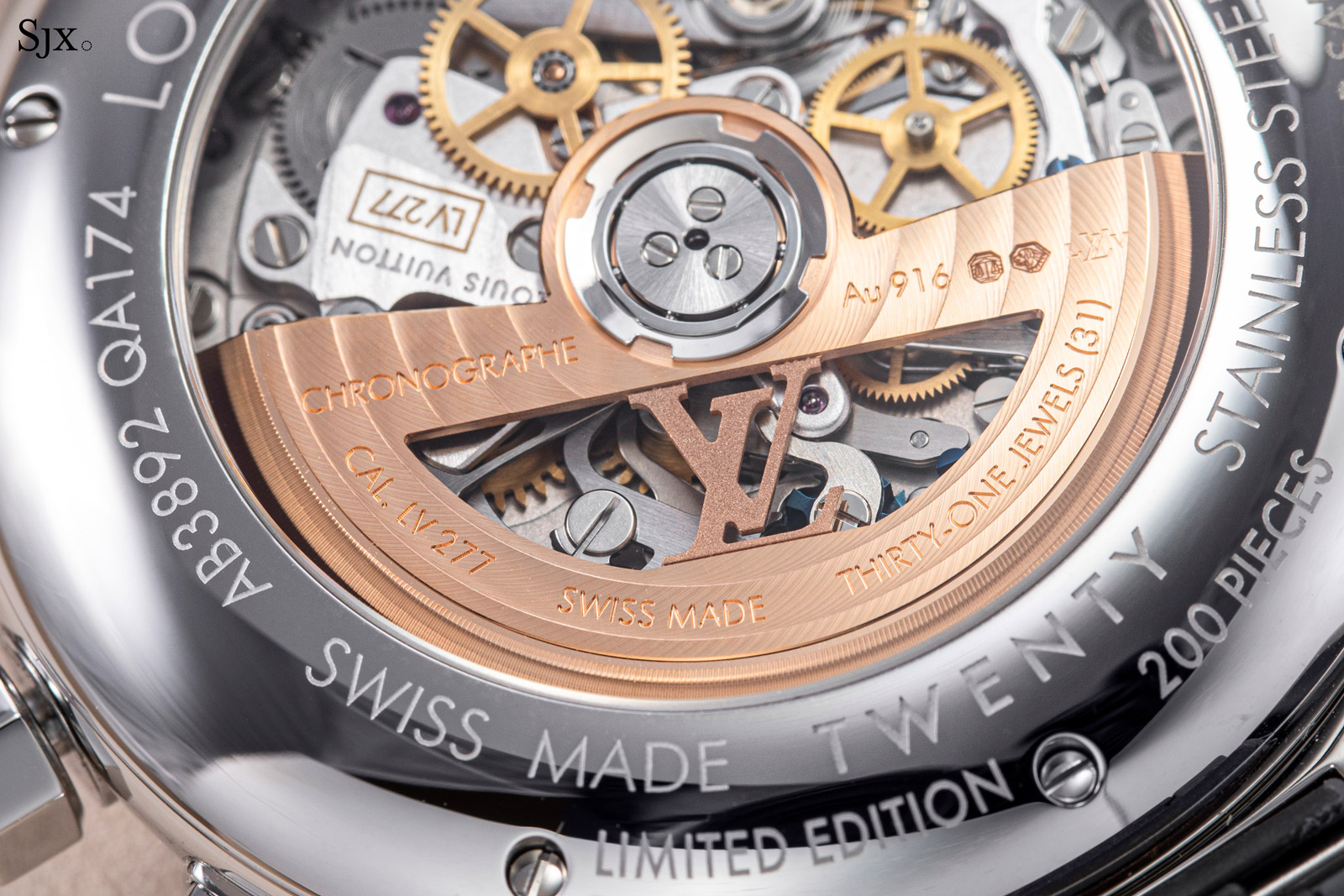 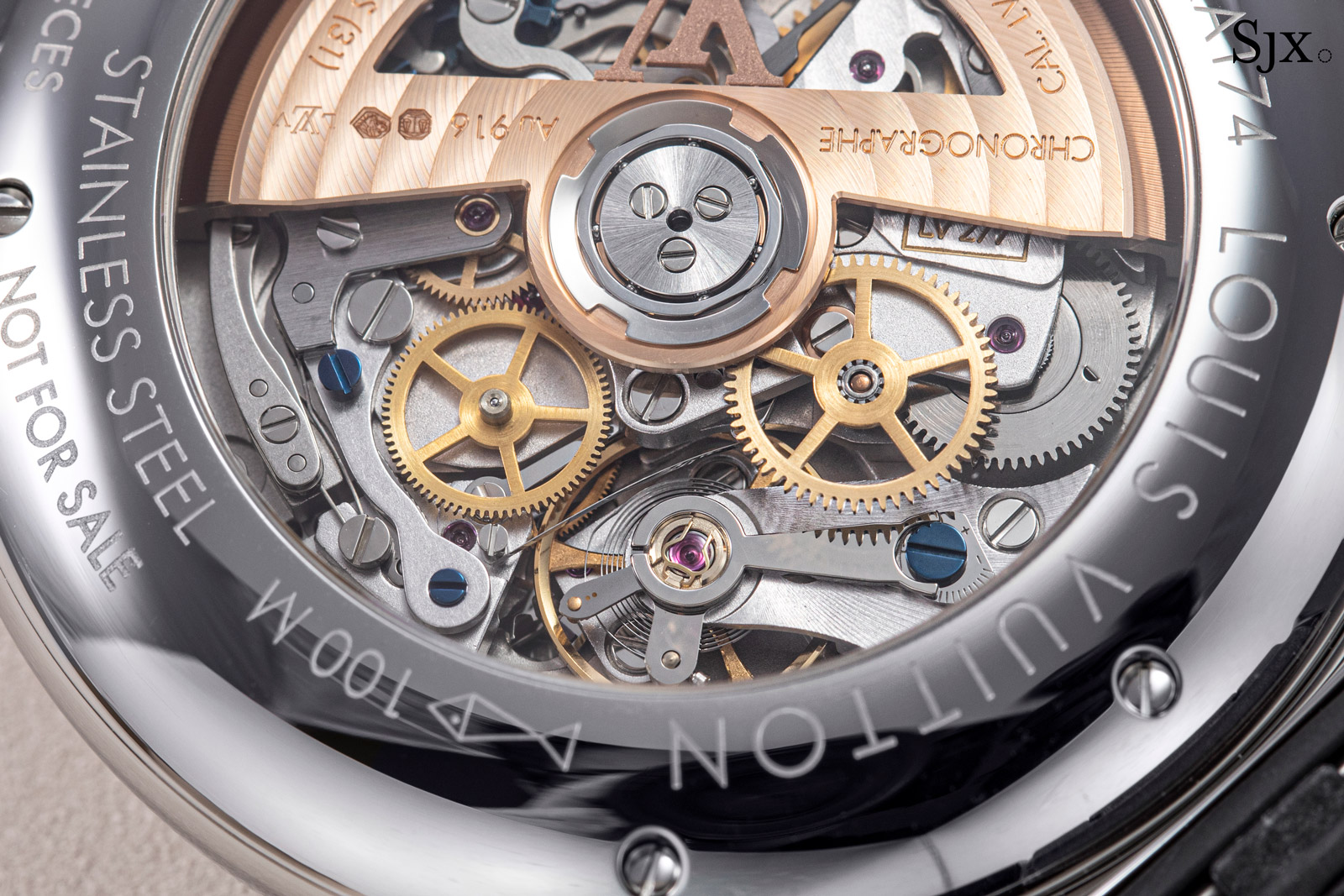 Visuals aside, the movement is identical to the standard El Primero. The balance runs at 36,000 beats per hour, or 5 Hz, while its chronograph is controlled by a column wheel and engaged via a lateral clutch.

That made the El Primero cutting edge in 1969, but it is now quite dated. The calibre also has elements that are now out of place in a high-end chronograph. That explains why fact Zenith itself is in the process of phasing out the original El Primero 400 in favour of the new El Primero 3600.

Consequently, the Tambour Twenty won’t win any prizes in terms of tech, but it is a fitting calibre for an anniversary edition that’s inspired by the 2003 original. At the same time, the El Primero is storied enough that is remains an appealing calibre, for its history if nothing else. Distinctively LV in terms of style, the Tambour Twenty is a good-looking watch with an especially appealing dial. At the same time, it has good technical content thanks to the El Primero within. The only downside is the price that is mitigated, but only partially, by the miniature trunk.