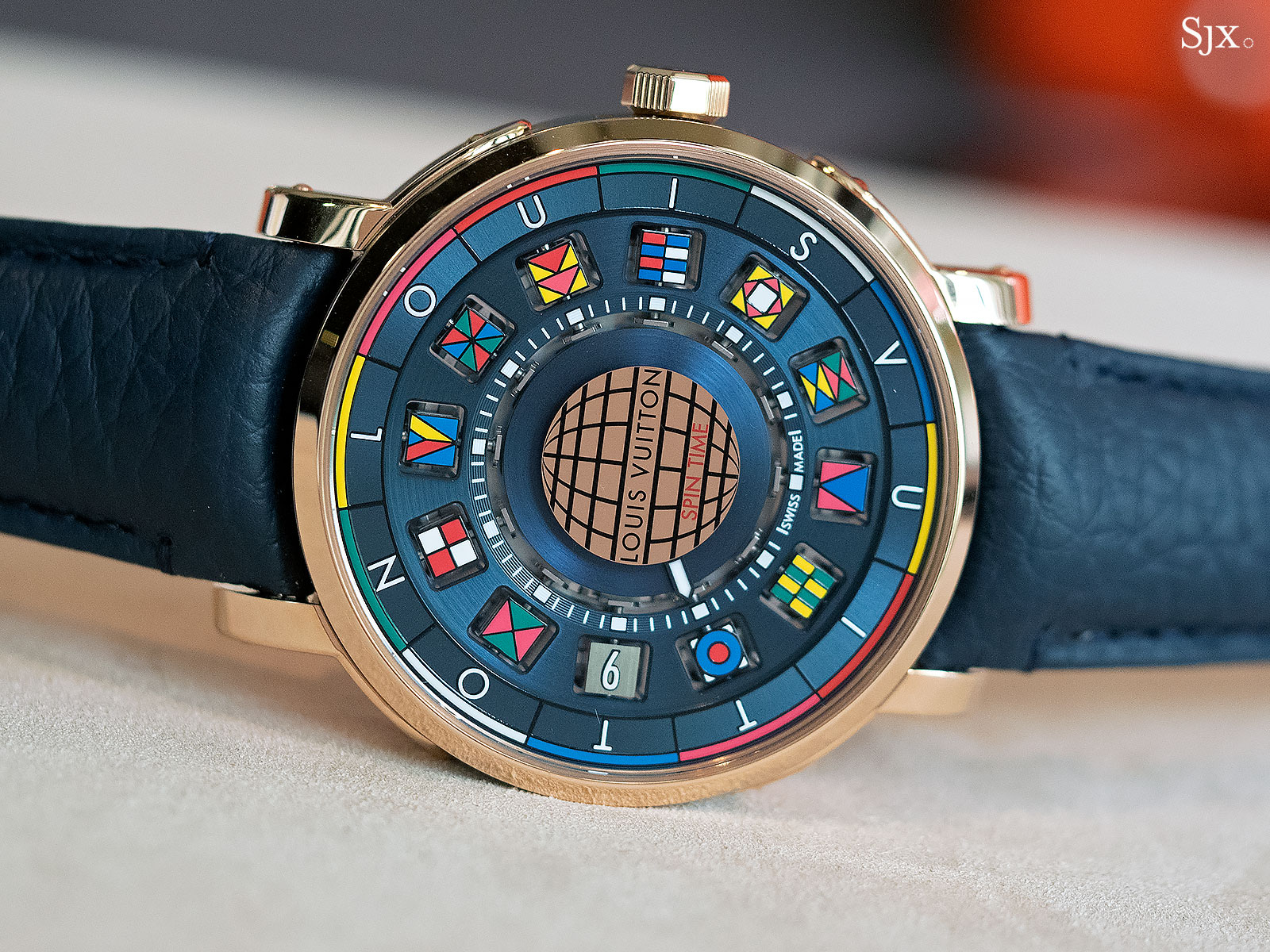 Devised by watchmakers Michel Navas and Enrico Barbasini, the duo who run La Fabrique du Temps, the subsidiary that’s responsible for all of Louis Vuitton’s complications, the Spin Time is the Parisian maison‘s signature complication. Originally executed as a five-minute regatta countdown mechanism, the Spin Time is now employed to display the hours (and Mr Navas has hinted it might even do more in the future).

The latest variant of the complication is the Escale Spin Time 41, which uses Louis Vuitton’s nautical pennant motif to decorate the 12 hour cubes. This specific example of the Escale Spin Time 41 is a limited edition of nine watches, featuring a metallic blue-grey dial with a gilded globe featuring meridians (vertical lines of longitude) in the centre of the dial. The standard version of the watch has a dark grey dial with a black globe featuring horizontal lines.

It’s essentially a three-dimensional jumping hour, featuring cubes indicating the hours that jump at the top of the hour. The cubes turn over one after another as the hours pass, showing the current hour numeral on the appropriate cube. Minutes are indicated via a conventional central hand that has its axis hidden by a gilded globe motif. The cubes are pad printed with precisely defined lines and bright colours; though they are not hand-painted as with the distinctive Escale Worldtime.

In order to distinguish the current hour from the next when the minute hand is at midnight, Mr Navas incorporated an arming mechanism. Just before upcoming hour cube jumps, it makes a fraction of a turn, rotating by just a few degrees, to indicate the next hour is almost here. The metallic grey-blue dial is produced in-house at Louis Vuitton’s Geneva factory, which has its own galvanic coating facility that can create dials in a variety of colours

As with most complications that call for intermittent rotation, each cube is driven by its own Maltese cross, which are all visible through a narrow aperture around the dial. The Maltese cross works in combination with mechanism similar to those found in most jumping hour watches, which is a star-shaped hour wheel that works in conjunction with a jumping lever and several tension springs. Despite being fairly complex, the Spin Time manages to be relatively slim, standing just 11.2mm high (for comparison a Rolex Submariner is 13.0mm). The impression of slimness is also helped by the domed case back and sloping bezel, which means the case middle is relatively narrow. Combined with the 41mm case, the relatively wide and flat proportions give it a low profile on the wrist.

The cube display mechanism sits on top of a robust but common ETA 2892 automatic movement, albeit one that has been dressed up with a mystery rotor on the back. It has a 42-hour power reserve. The LV 77 movement has a rotor that’s actually a full disc weighted on its underside, hence the “mystery” effect of not having an obvious oscillating mass

Mechanically the Spin Time can be regarded being descended from the wandering hours (a complication typified by the Audemars Piguet Star Wheel), while also being similar to Urwerk’s satellite cube time display. But because it is from a brand that is better known for its luggage than watches, the Spin Time gets less respect than its deserves.

The case is a combination of titanium for the case middle and back, but 18k rose gold for the lugs, crown and bezel. The bi-metal construction means that the case is both lighter and less expensive than it would be if it was entirely in gold.