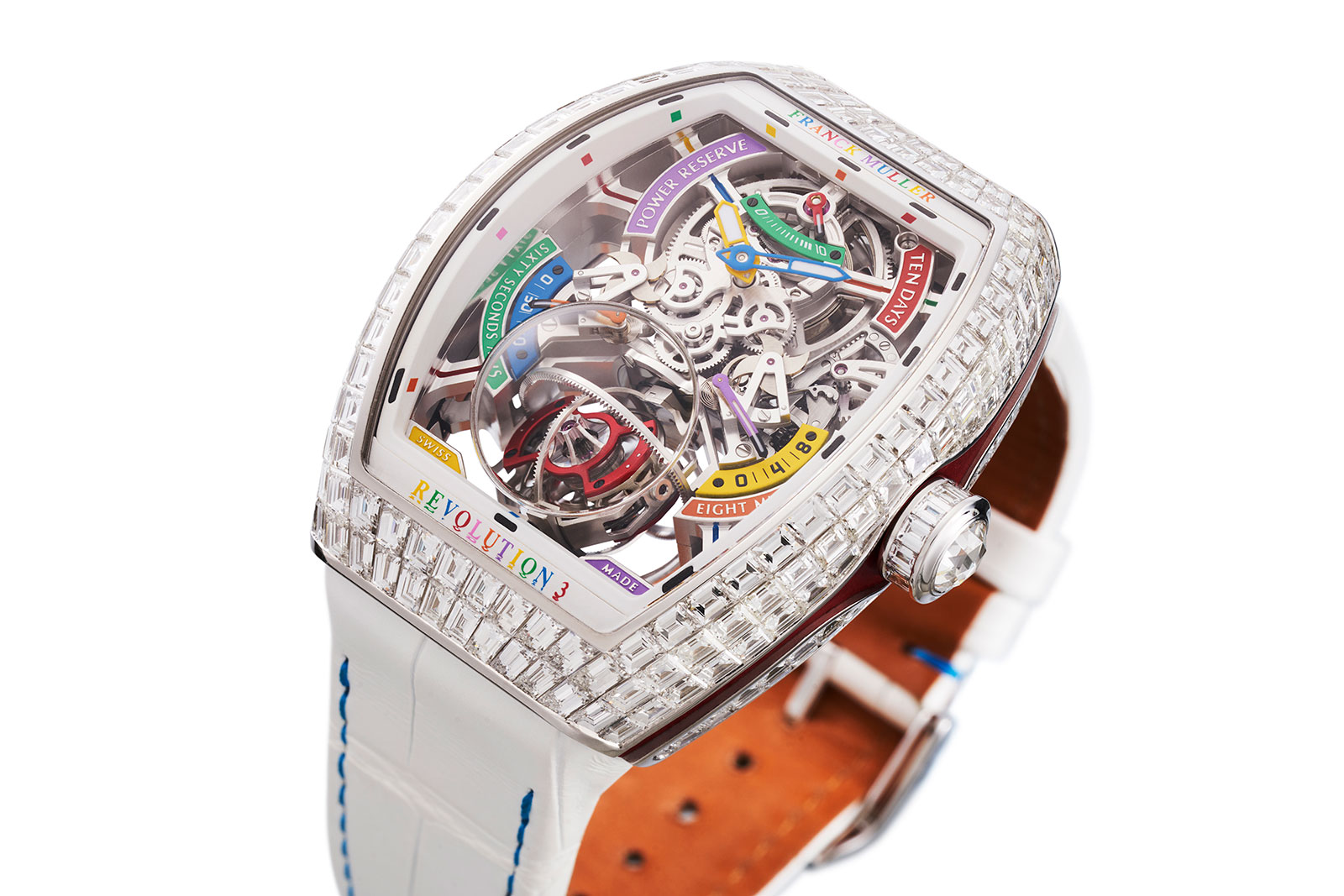 As Cortina Watch celebrates its Golden Jubilee this year, it has progressively rolled out a series of commemorative editions, including a pair from Patek Philippe in the form of a unique Dome Clock (that’s unfortunately not for sale) and a special Calatrava ref. 5057G (that fortunately is).

Now the Singapore retailer has taken the covers off its most extravagant anniversary edition yet, the Franck Muller Vanguard Revolution 3 Skeleton Cortina Watch 50th Anniversary. The anniversary lineup is made up of five unique versions of Franck Muller’s triple-axis tourbillon wristwatch, each set with 28.4 carats of baguette-cut gemstones. One of the five watches is complete – the others are still being put together – and is on display at an exhibition in Singapore taking place from now till September 13, 2022. 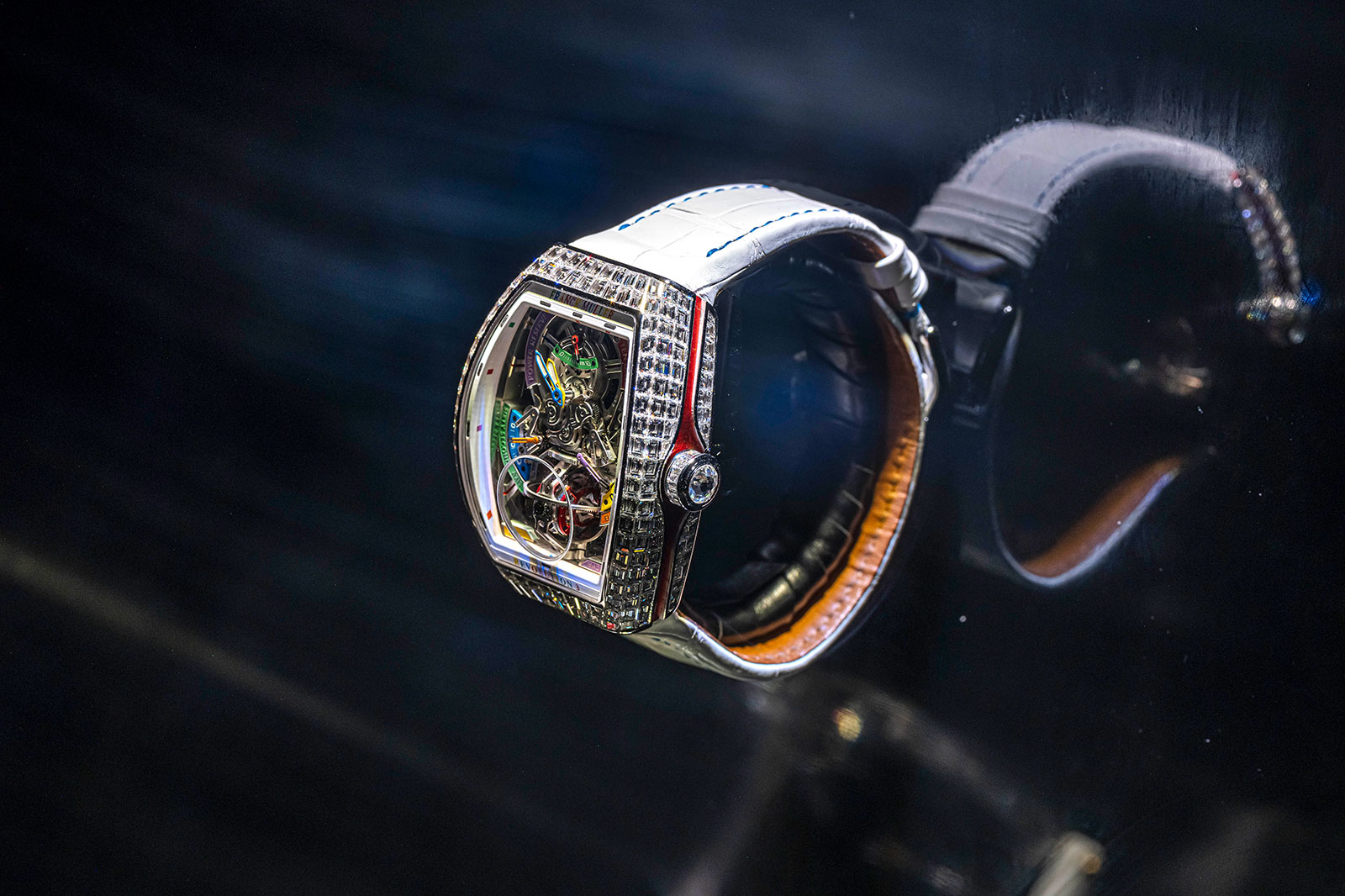 Franck Muller is one of the leading practitioners of lavishly-jewelled complicated watches, while Cortina Watch has long been a champion of high-jewellery watches, so the anniversary Vanguard tourbillons make sense both ways. While the large-format bling has a niche appeal, the Vanguard Revolution 3 movement is interesting in itself.

In fact, the movement is quintessentially Franck Muller in how it highlights the tourbillon. Here the tourbillon regulator is less about mechanics than visual spectacle. Not only does the tourbillon twi-axial and spherical, it also features twin retrograde minute scales that track the rotation of its constituent ages. And in a smart use of the ample space within the large case, the movement has a huge mainspring that gives it an impressive 10-day power reserve. 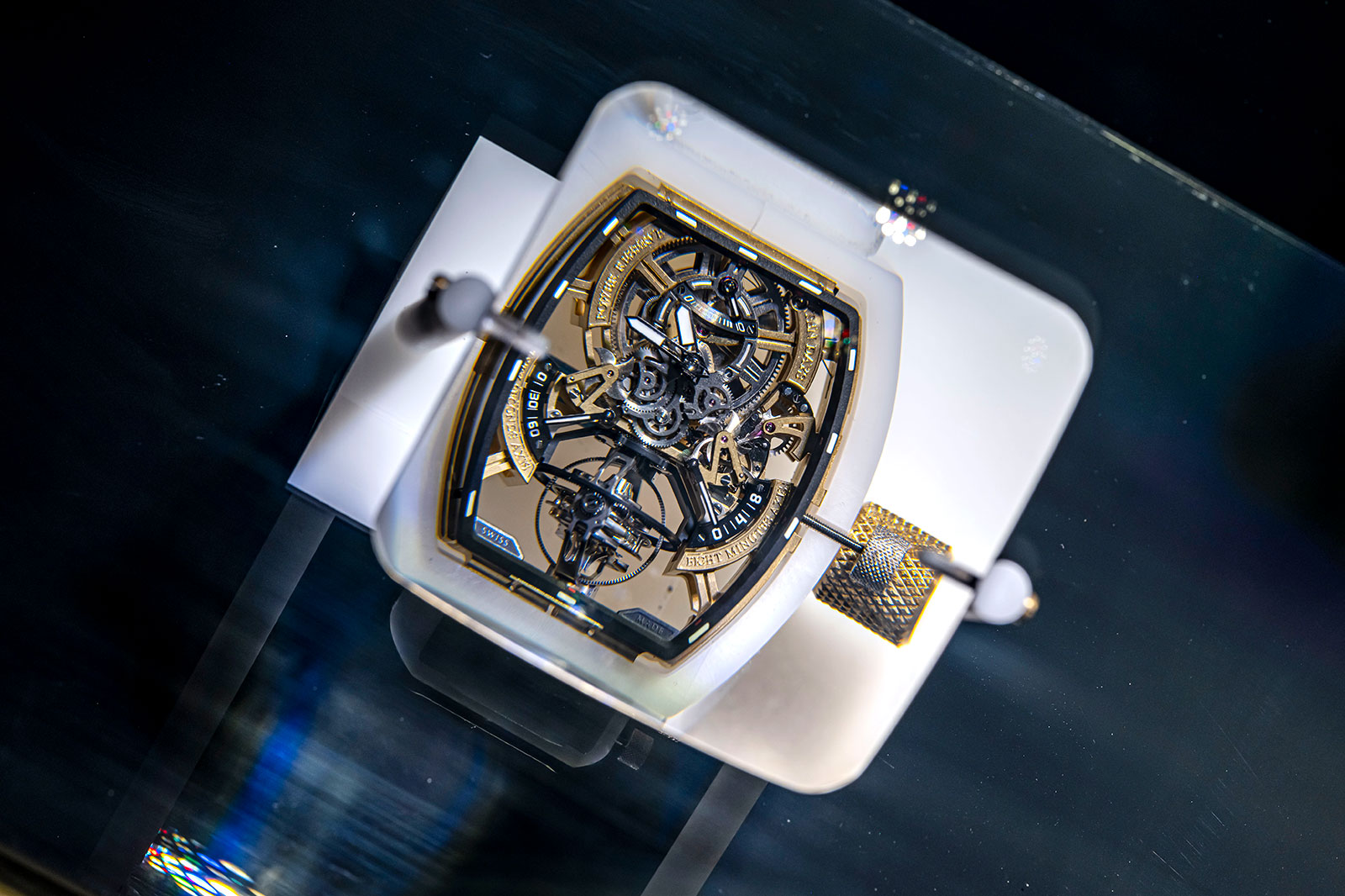 The Vanguard Revolution 3 movement freed of its case

Putting on a show

Fittingly for such an extravagant watch, the Cortina Anniversary tourbillon utilises the largest Vanguard case size that measures 46 mm by 55.9 mm and stands 13.7 mm, resulting in ample room for the 225 baguette-cut gemstones on the case.

Evolved from the brand’s signature tonneau-shaped case, the Vanguard does away with the lugs and instead has the strap integrated into the case. Another key feature of the case design are the anodised aluminium inserts on the case flank. 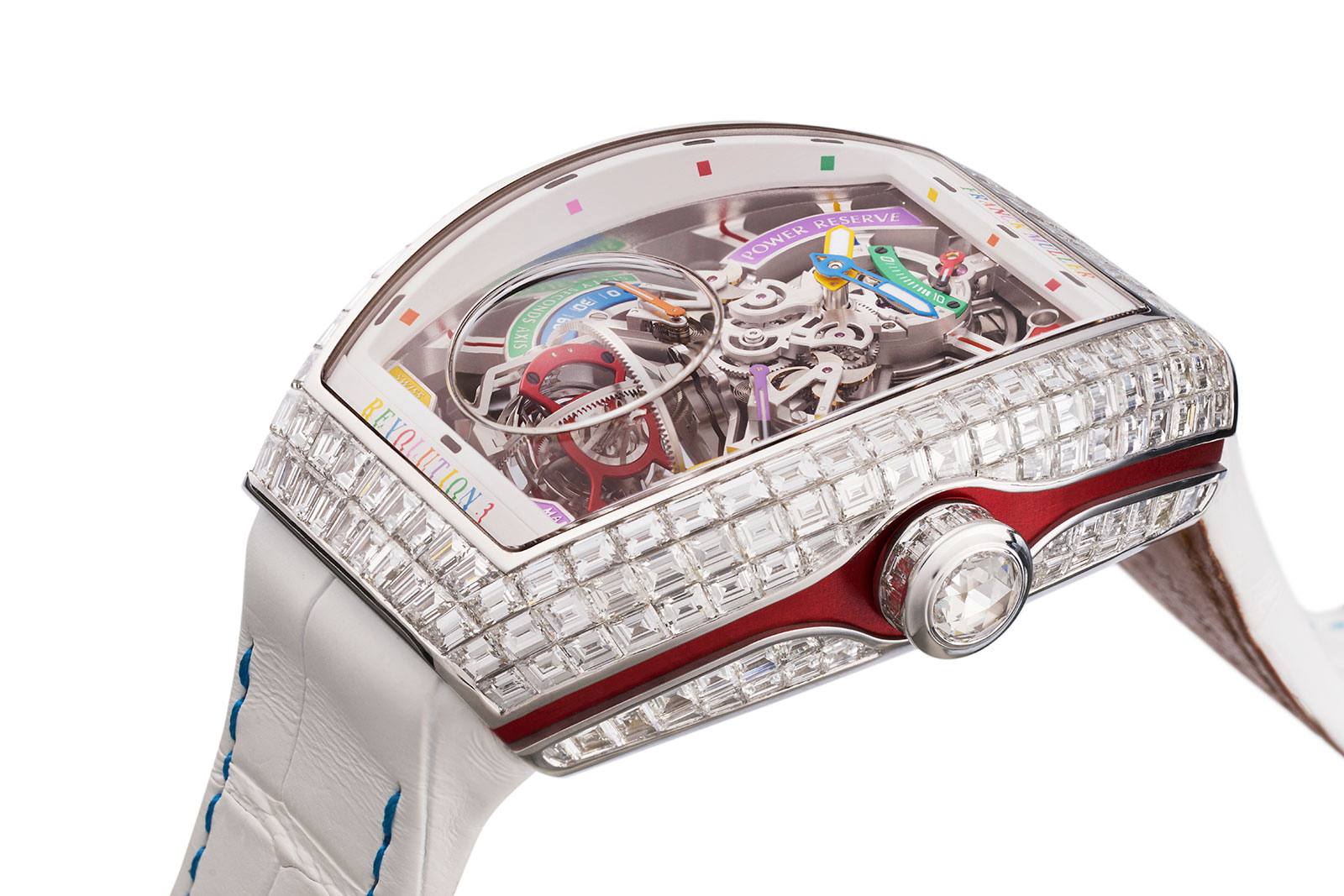 The diamond-set version has red inserts on the case side

The FM 2030 SMR-VS movement features a triple-axis tourbillon at six o’clock. Its innermost cage makes one revolution every minute, the intermediate cage does the same in eight minutes, while the outermost cage takes 60 minutes to complete one cycle.

Accompanying the cages on their revolutions are a pair of retrograde minute indicators on each side of the tourbillon. The display at four o’clock is connected to the intermediate axis and tracks it eight-minute rotation, while the display at eight o’clock does the same for the 60-minute cage. 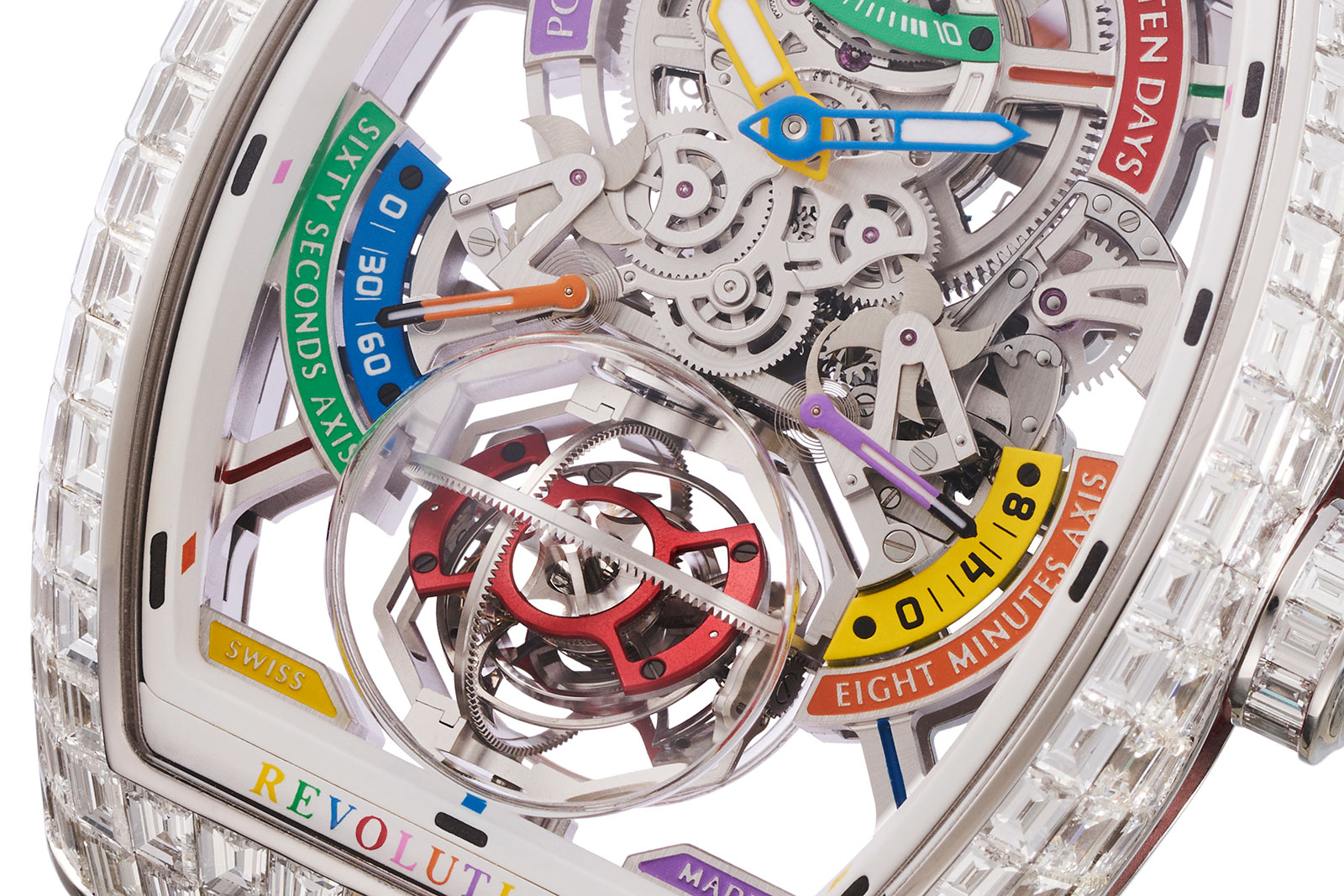 And thanks to an enormous mainspring sitting at 12 o’clock that occupies almost half the movement’s volume, the Vanguard Revolution 3 has a ten-day power reserve shown on a display that sits over the mainspring. 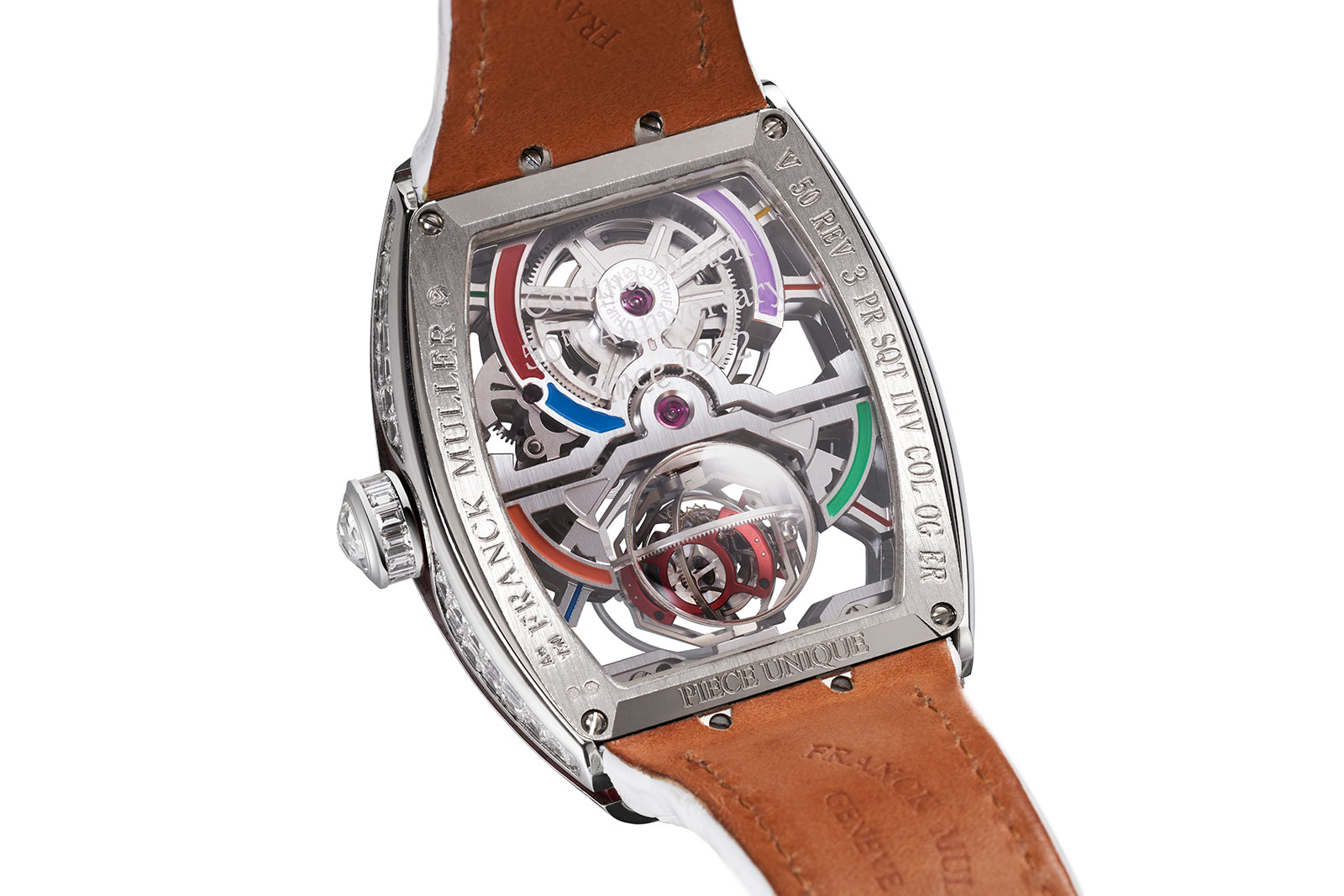 Three of the five unique Vanguard tourbillons are set with diamonds but distinguished by the coloured finish on the movement. The remaining two, however, are perhaps even more striking because they are entirely covered in coloured gemstones. One is set with baguette-cut emeralds and the other, baguette-cut rubies. 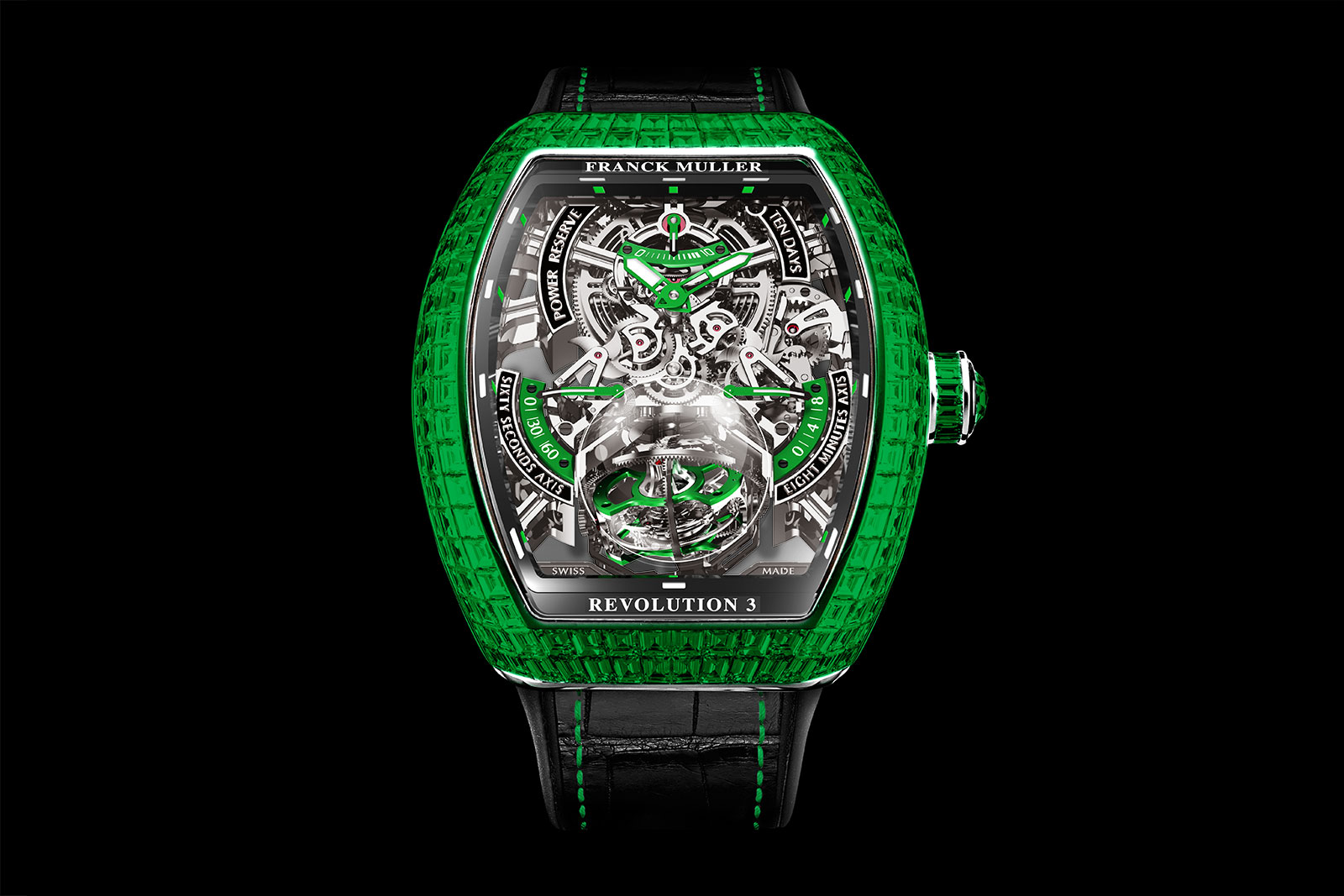 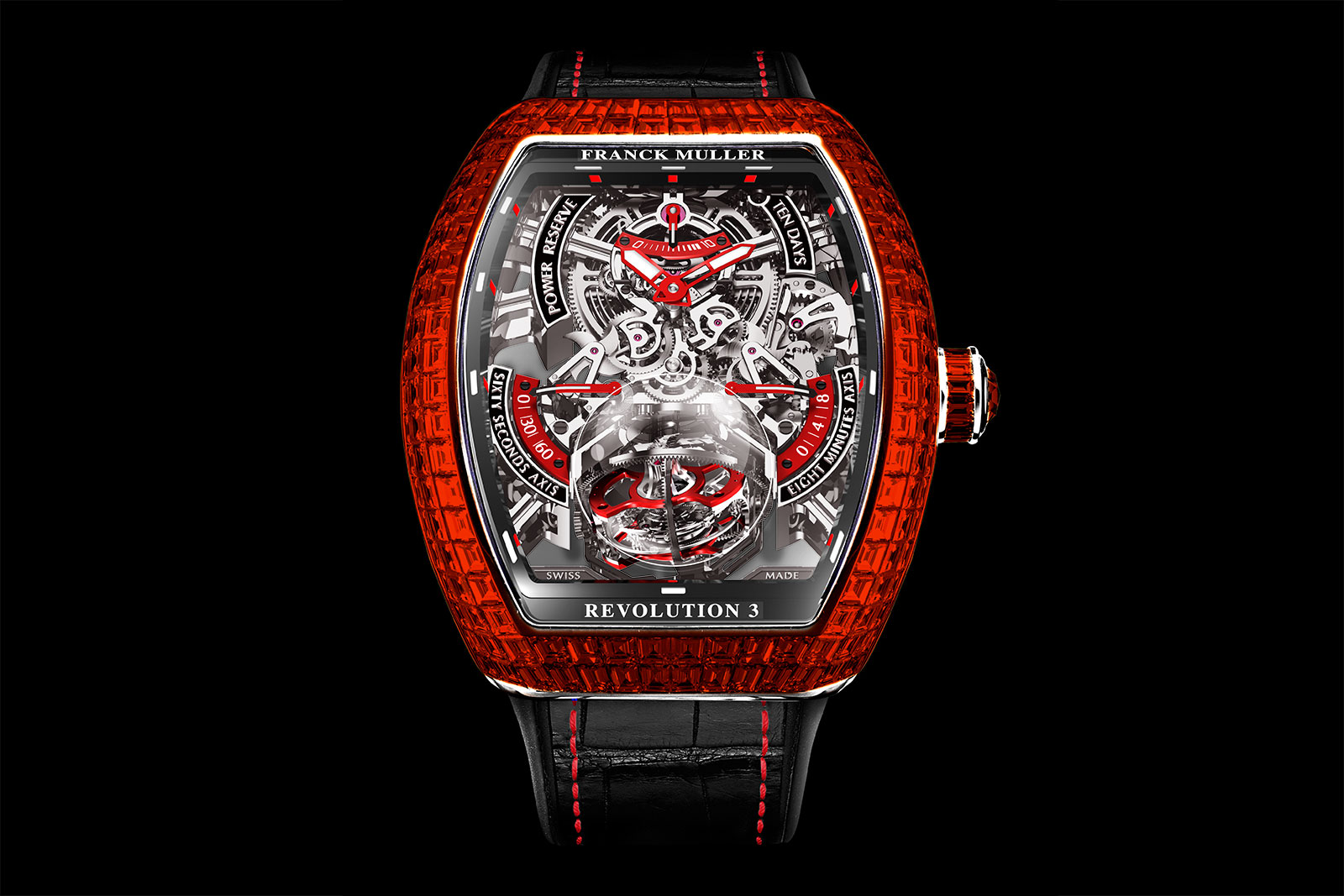 The diamond-set anniversary tourbillon is the centrepiece of the Franck Muller Cortina Watch Golden Jubilee exhibition now taking place at Paragon Shopping Centre long Orchard Road. Focused on jewelled and complicated timepieces, the exhibition is on show from September 1-13 and open to the public daily from 11 am-8 pm. 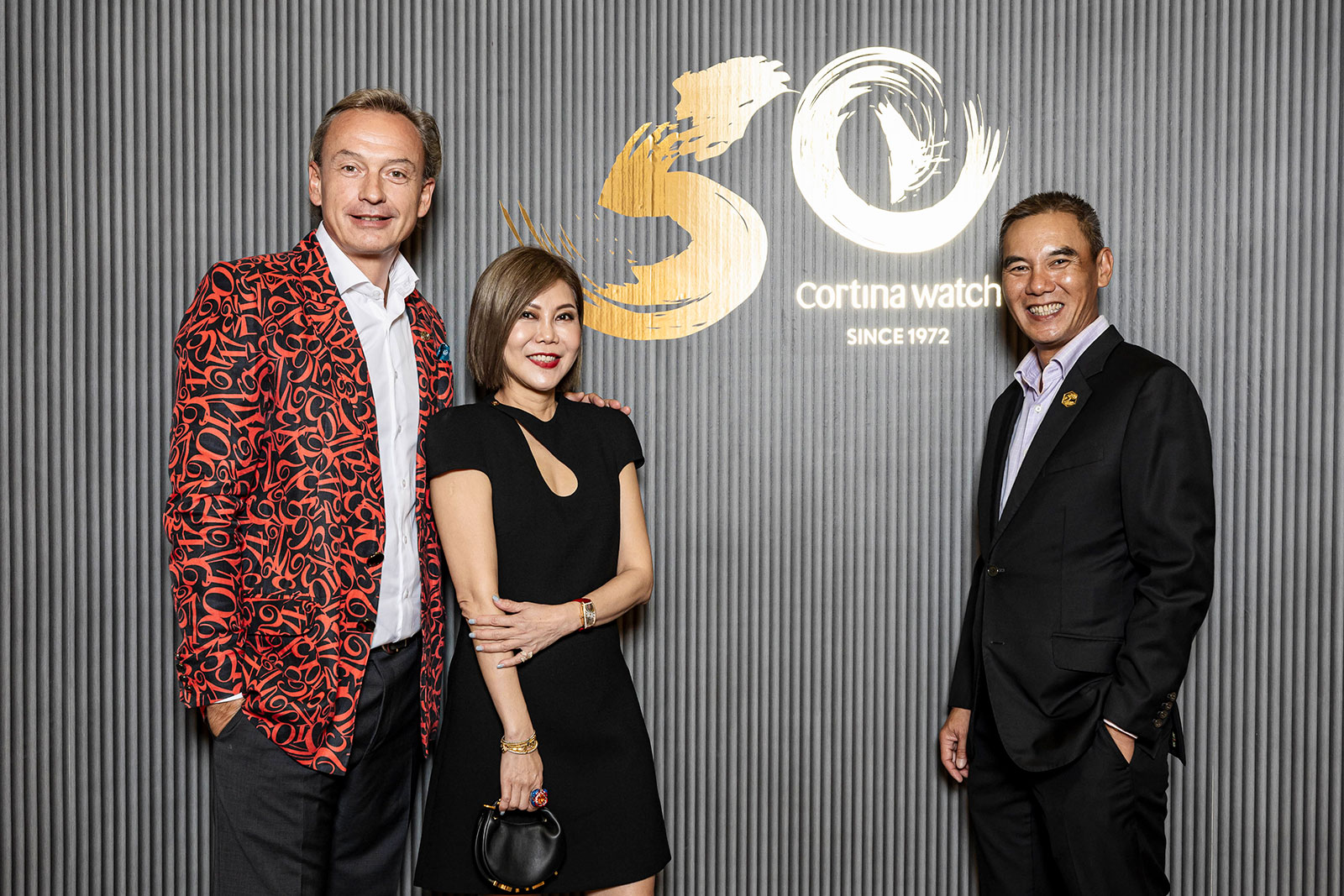 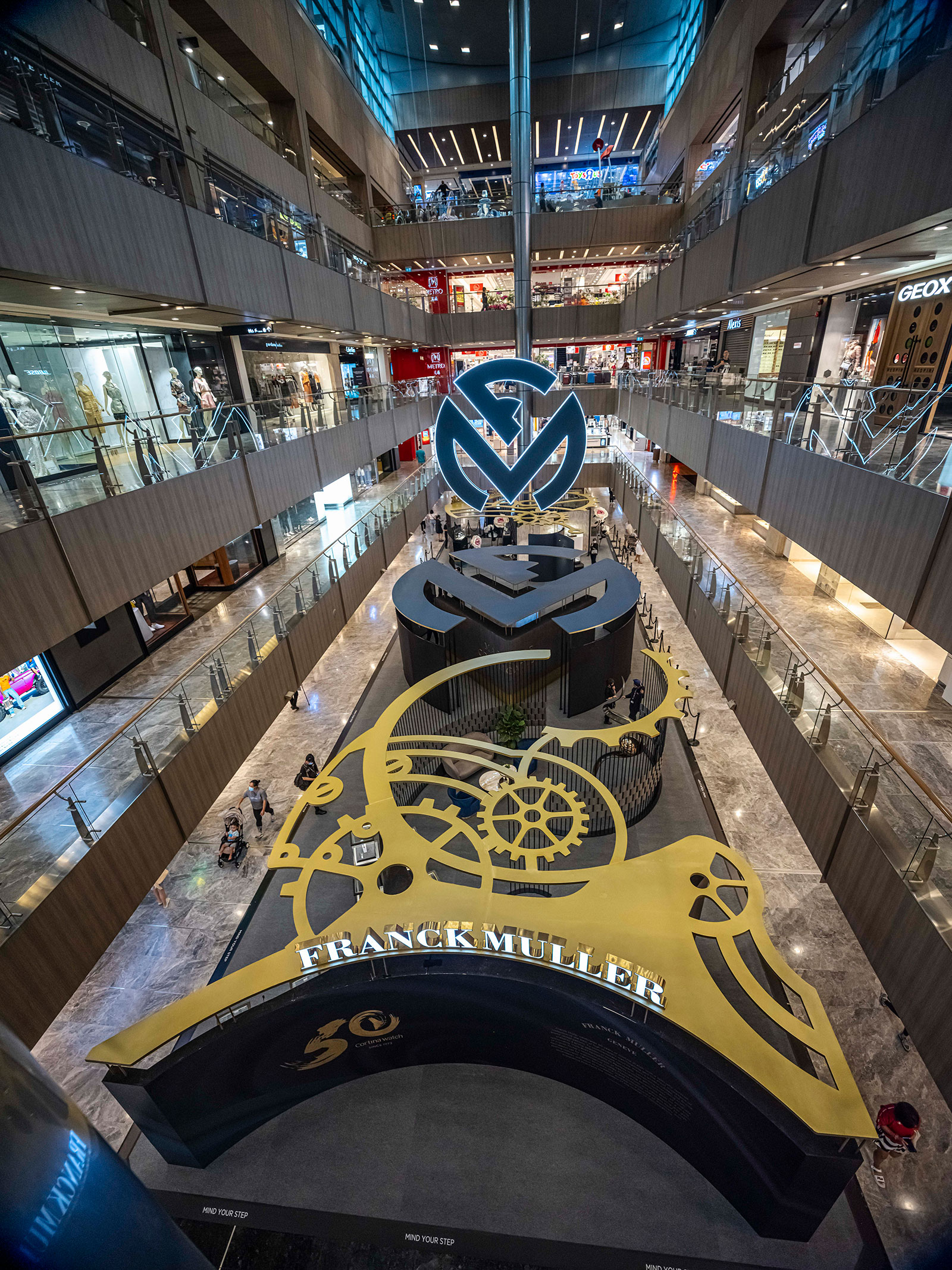 The exhibition in the main atrium of Paragon