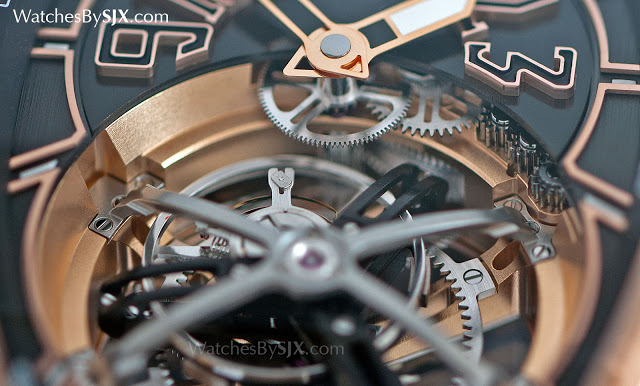 Equipped with an oversized tourbillon that fills up more than half of the dial, the Franck Muller Vanguard Gravity is a reminder of why visual impact is so important in a tourbillon. Despite pretensions to the contrary, tourbillons are largely aesthetic, rather than functional. That being the case, a tourbillon should be visually impressive, even dramatic, a tiny spectacle on the dial. The Franck Muller Vanguard manages that by sheer dint of size, with a tourbillon bridge that is some 21mm in diameter, completing dominating the dial. Franck Muller has historically been adept at creating unusual tourbillons, notably the multi-axis Revolution or the ultra-large Gigatourbillon. The newest addition to its stable of tourbillons is the Vanguard Gravity, which boasts an oversized and unusual, ellipse-shaped tourbillon cage. It’s equipped with an in-house movement that has a five day power reserve. Rising upwards from the opening in the dial, the bridge of the tourbillon, a massive, four-armed structure that looks like it was appropriated from a suspension bridge, measures 21.2mm at its widest, larger than some ladies’ watches (even the Rolex Lady Datejust is only 26mm in diameter). Six different coloured PVD coatings are available for the bridge, though the plain steel bridge looks the most purposeful. Three screws hold down each arm of the tourbillon bridge, which has a plain, probably too plain, frosted finish. The decoration here, as well as for the rest of the movement, could do with more attention. Though small compared with the cage, the balance wheel is an enormous 14mm in diameter, exactly the same size as the balance found on the MB&F Legacy Machine 1. It beats at a relatively slow 18,800 beats per hour. Though effective, the Etachron-style regulator and flat hairspring is a let-down, however, given its ordinary appearance and prevalence in lower-end movements. The case is a variant of Franck Muller’s signature Cintree Curvex case, with the lugs removed and the strap (rubber with a crocodile top) integrated into the case. A rubber inlay running along the length of the case is meant to echo the lines of the strap.