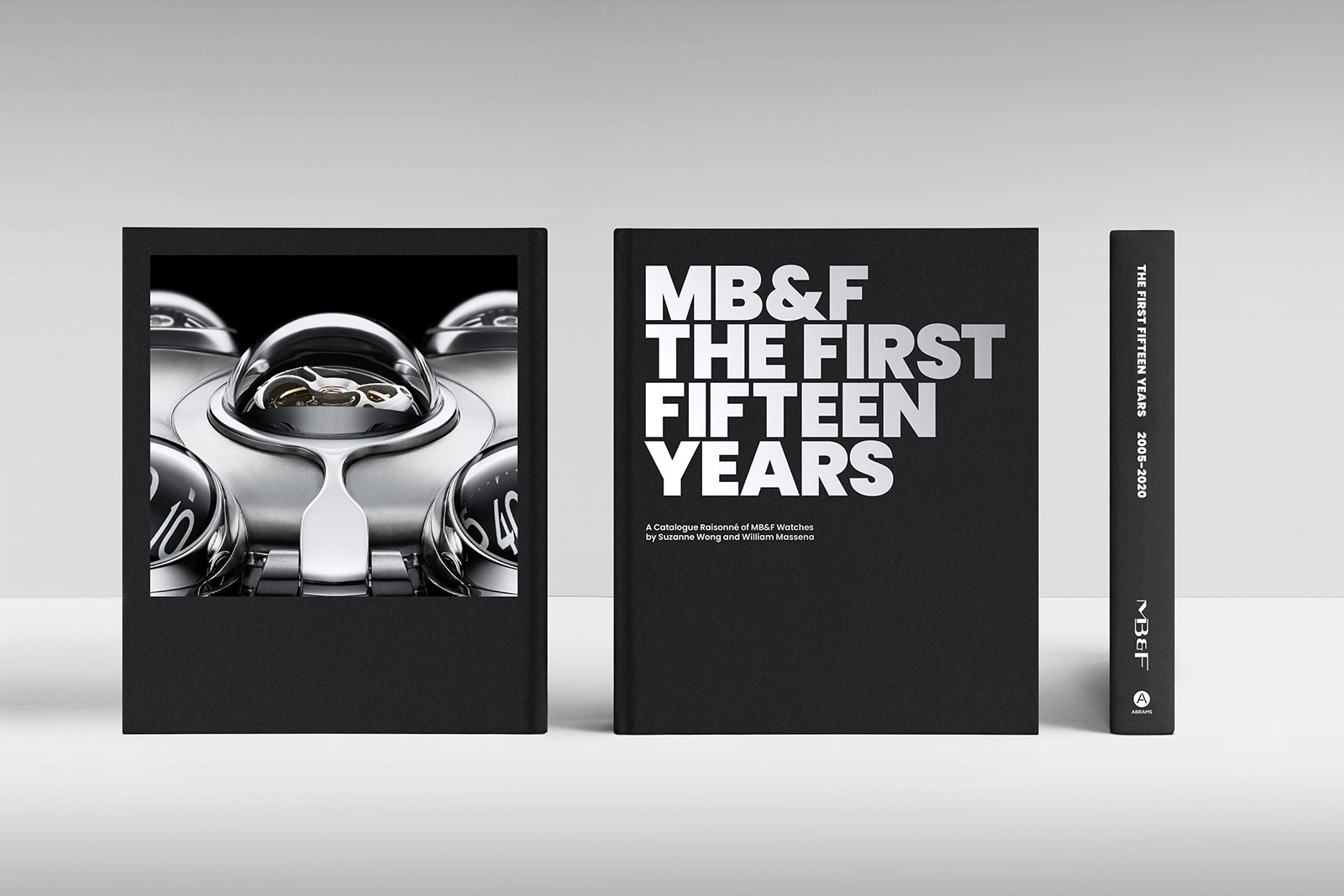 To celebrate its 15 years – from 2005 to 2020 – of making extraordinary watches, MB&F commissioned a 312-page book, MB&F – The First Fifteen Years. In its short foreword, MB&F founder Maximilian Büsser states he did not want a biography since they are “only written at the end of a journey”.

Instead, he puts forward the rhetorical question: developing 18 calibres for over 160 products over the period “deserves to be documented, right?” He adds “hundreds of artisans, engineers and watchmakers” came along for the ride and “this is the story I love to tell”.

He describes the tome as a catalogue raisonné, adding that it is something “never been done for a watch brand; a world first in the watchmaking industry!”

Defined by the New York Public Library, a catalogue raisonné in the visual arts serves as an important tool not just to establish an artist’s oeuvre, and thus record history, but also to aid in authentication by cataloguing all the known works of an artist. The New York Public Library also adds “Essay(s) on the artist” and “Critical assessments and remarks” as desirable content in such a publication. 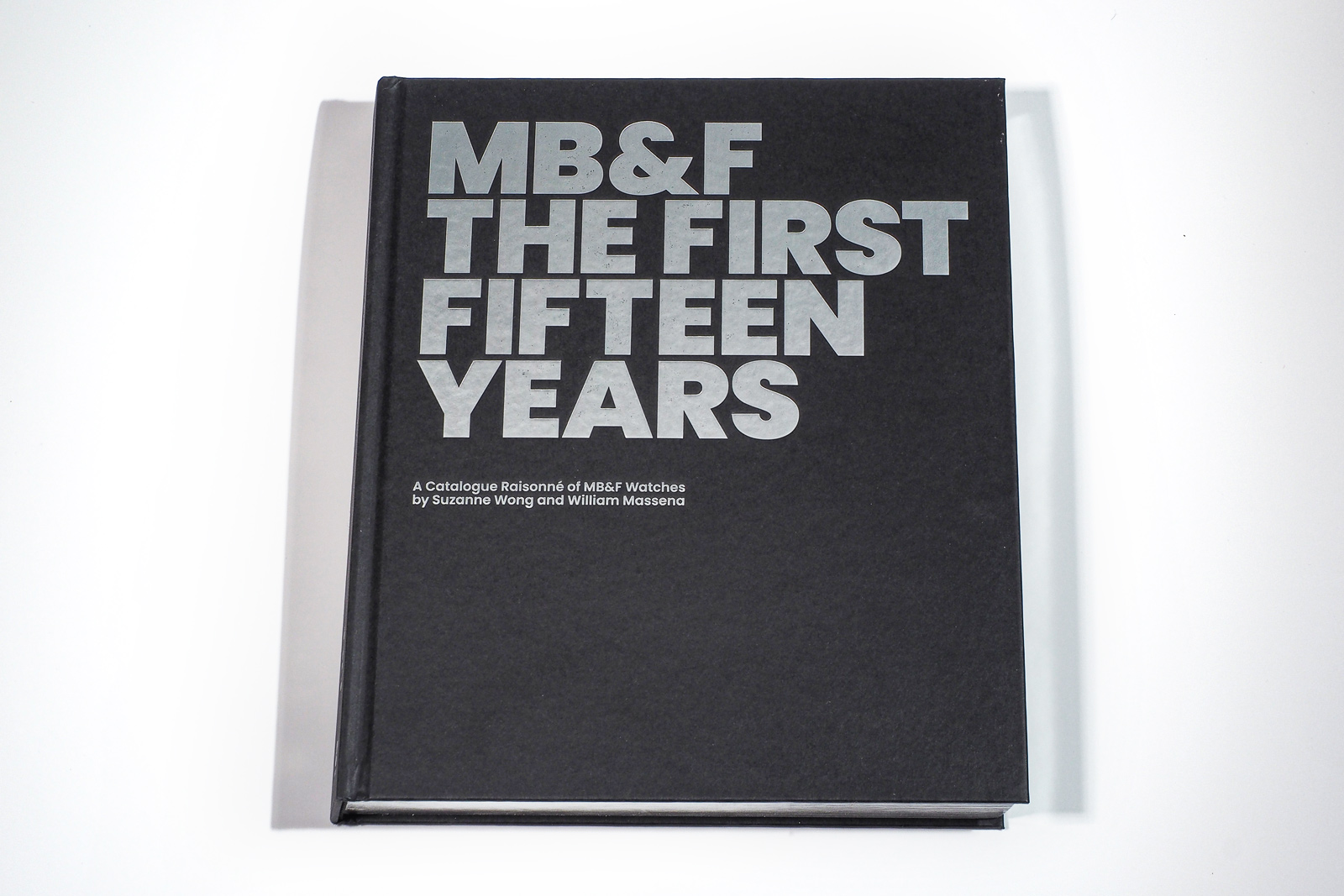 All the watches and all the friends

The main part of the book is such a catalogue of 254 pages, divided into three sections: “Horological Machines”, “Legacy Machines”, and “Co-creations” that covers the objects created by clock makers, music box manufacturer Reuge, and others. An index allows easy access to the information on offer, but the index only covers the catalogue section of the book. 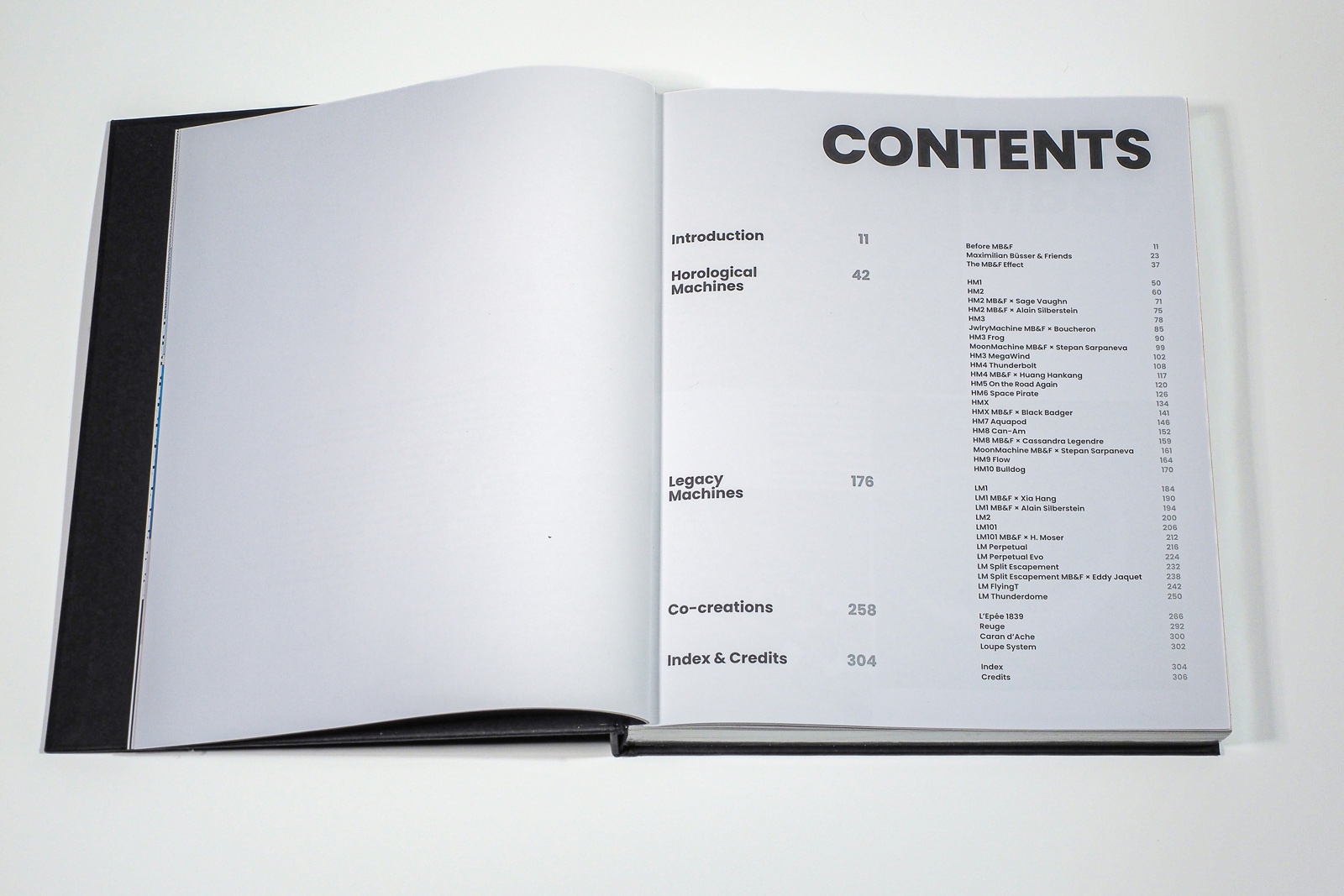 The catalogue section is largely the work of William Massena, who was also the genesis of the book, having proposed the idea to Mr Büsser. Within the catalogue, the two model lines – Horological Machine (HM) and Legacy Machine (LM) – are each introduced with a few paragraphs explaining the philosophy as well as interesting details behind their conception.

For example, the HM3 is identified as the most beloved Horological Machine by MB&F clients – it has the highest production total across all models – but that the focus of the HM3 shifted to aesthetics and styling after the first Legacy Machine was introduced in 2011 to take up the mantle of furthering watchmaking innovation.

Befitting a catalogue raisonné, each model is presented in a uniform style and accompanied by its full specifications, including the watchmakers responsible for the movement construction, year of the model’s introduction, years of production, and – most notably – the total number produced, including prototypes. In view of the diversity of MB&F’s wristwatches, these facts and figures will be most helpful for collectors. 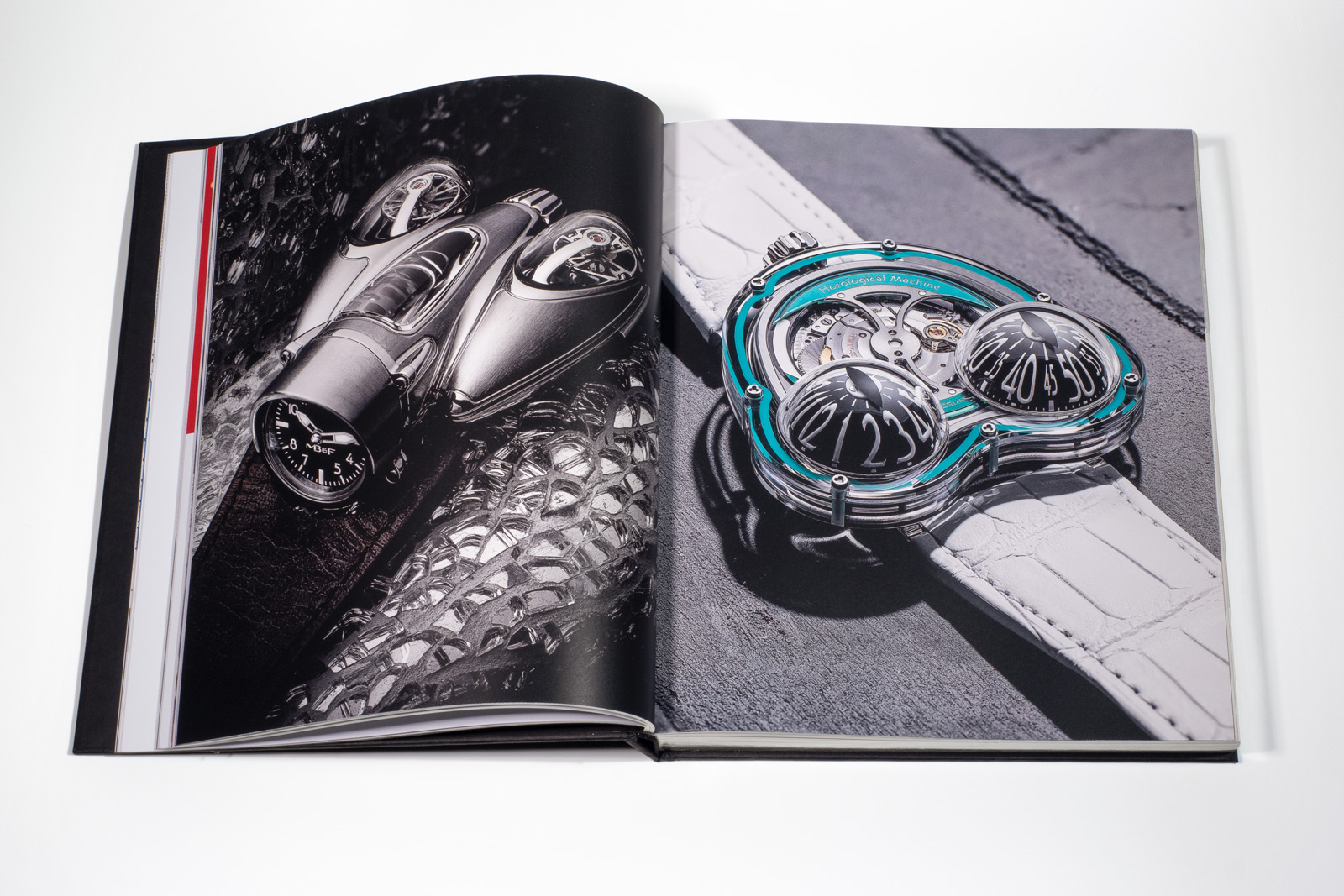 Detailed descriptions of the design inspiration and technical considerations precede the illustrations for each model and calibre. And for models that were created in collaboration with an artist, like the LM1 “Xia Hang”, the text includes a concise one-page biography that provides some insight into the artistic collaborator.

The illustrations in catalogue are familiar stock photos from MB&F. Fortunately, the brand’s stock images have always been detailed, including close-ups of the watch as well as uncased movements, and they illustrate the physical attributes of each watch well. Detailed captions also properly identify each image by repeating the specifications for the respective watch. 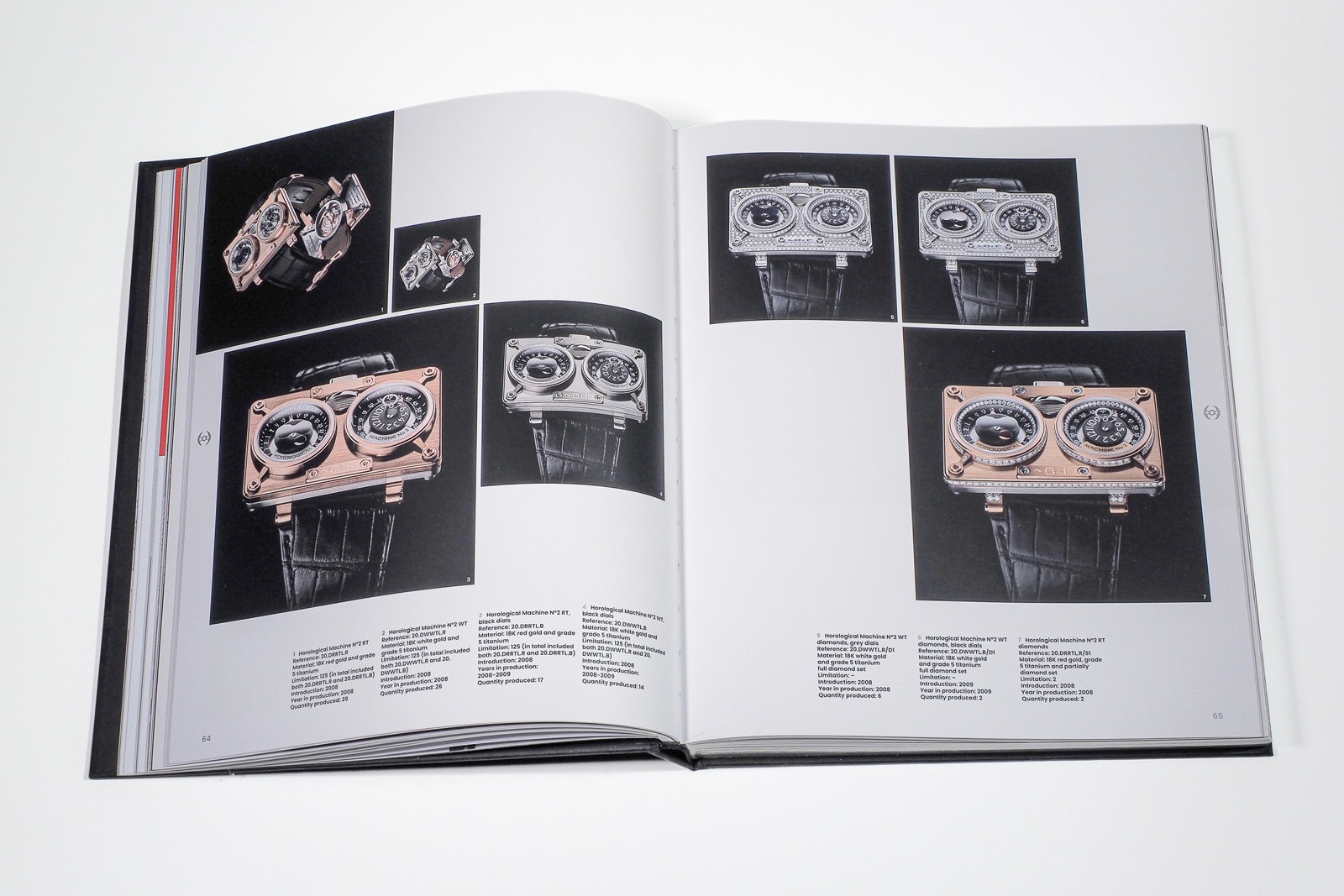 Variants of the HM2, complete with specifications and number produced 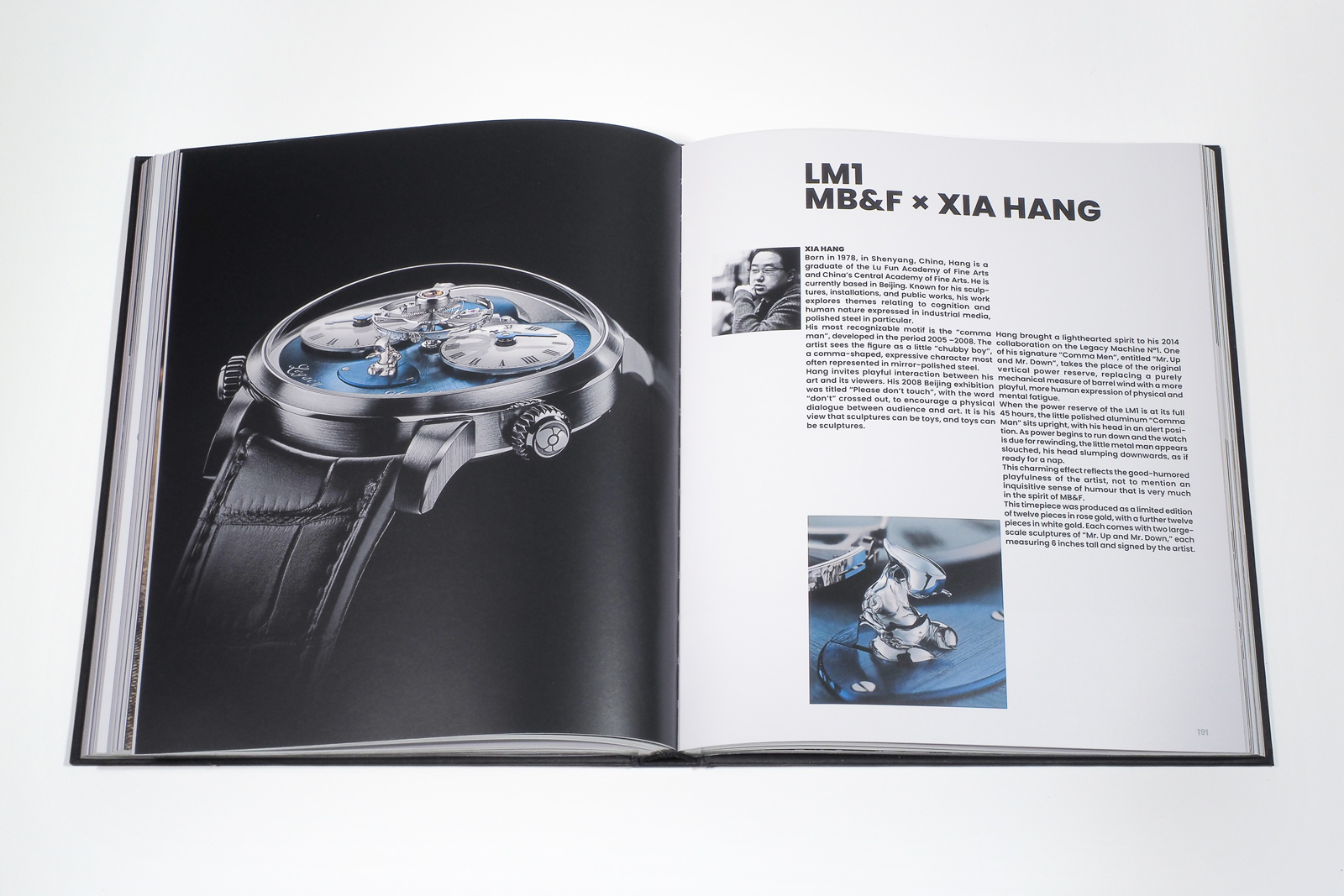 Having wanted a comprehensive catalogue from the beginning, Mr Büsser had to reveal timepieces he kept under wraps in the past. While he has categorically stated in the past that MB&F does not make bespoke, unique watches, the brand did nevertheless produce such watches when times were particularly hard in 2009 and 2010. The one-offs are also listed the the catalogue and accompanied by full details and illustrations.

Adding to the completeness of the catalogue is detail coverage of the table clocks, music boxes and automations, the “Co-Creations” produced by L’Epée, Reuge, Loupe Systems and others. Most of them are pieces of mechanical art that the average MB&F wristwatch enthusiast might have overlooked, so it is enlightening to discover the ideas that led to each of their conception. 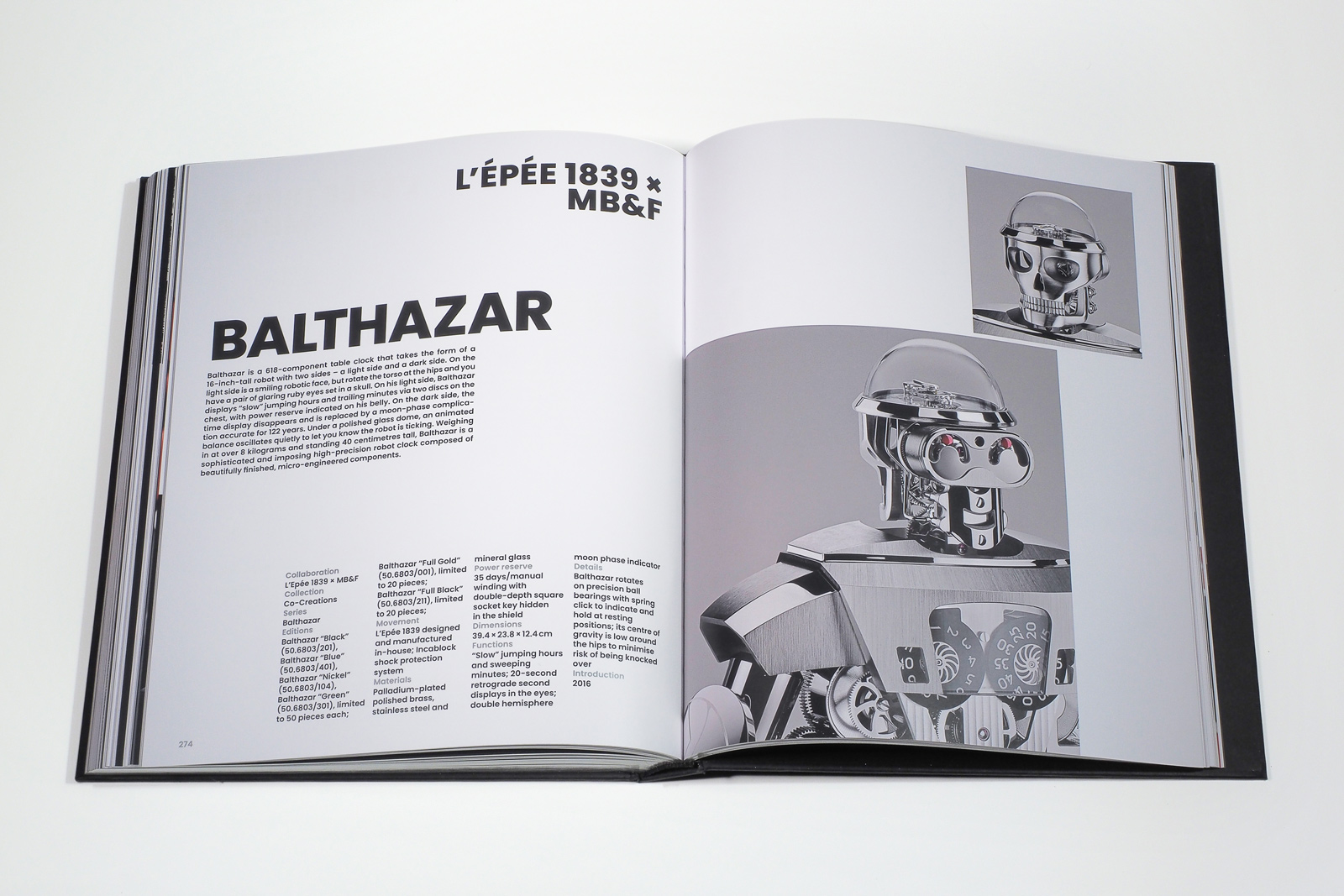 One of MB&F’s robot table clocks 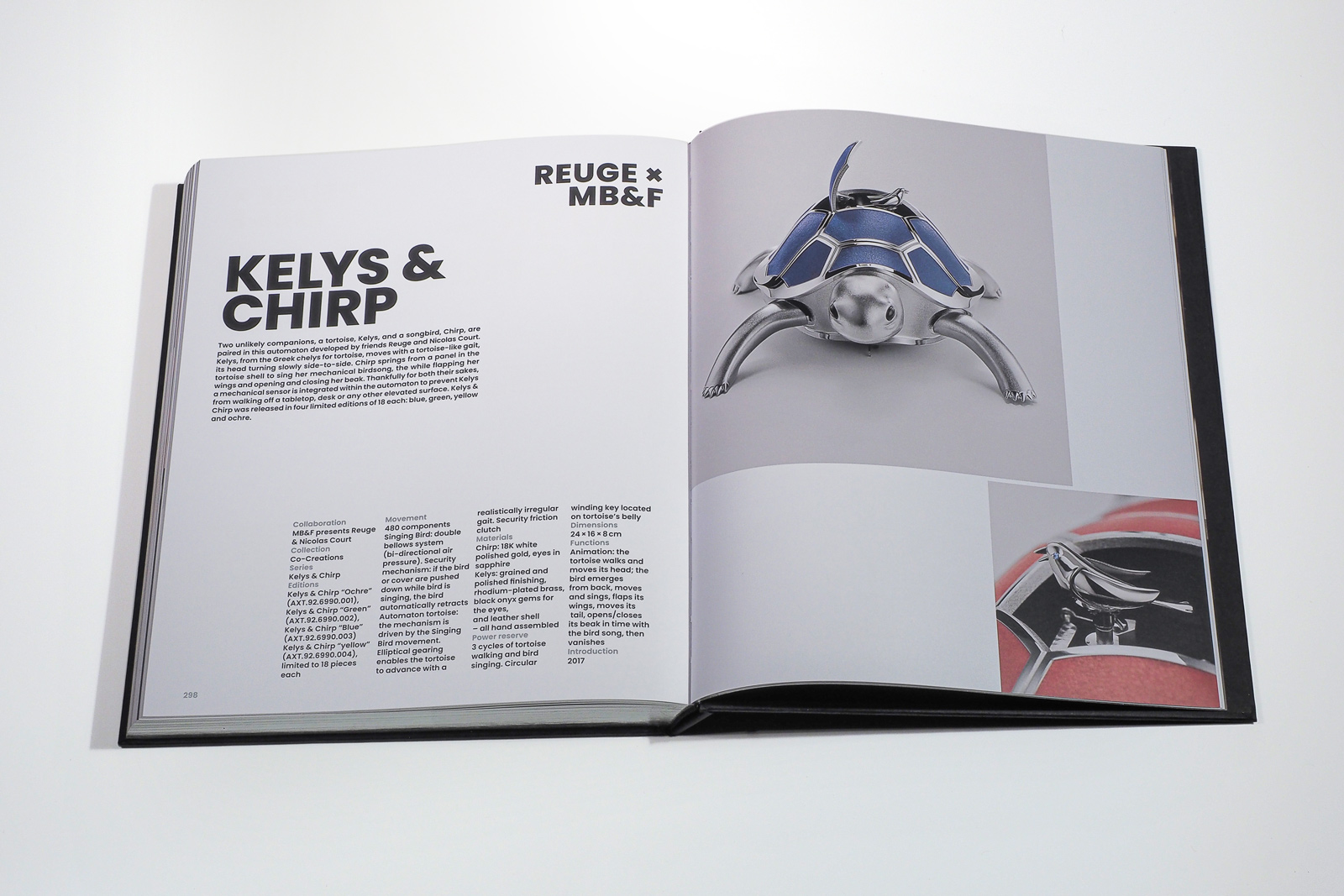 The tortoise automaton created by Reuge and Nicolas Court

For my taste, the catalogue part of the book is very well done and allows enthusiasts to discover MB&F as a brand. It fulfils what is expected of a useful catalogue raisonné, particularly in assuredly guiding a collector through the bewildering diversity of MB&F’s creations, the main goal of the book according to Mr Massena. The short write-ups accompanying each model are to the point, distilling the information behind inspiration, conception, and construction into a few well-chosen words.

So what about the “essays about the artist” and further material that make up a good catalogue raisonné?

Well, this section of the book, 40 pages written by Suzanne Wong, begins with a contradiction. Amusingly, it comes right after Mr Büsser’s introduction where he writes of wanting to tell the story of the “Friends” and their contributions to the success of the brand instead of a biography.

According to Mr Massena, “it was important to include [Max’s] life because it explains much about his work. MB&F is much a reflection of Max’s psyche.”

Ms Wong, on the other hand, says “[the text] I wrote was based on 12 years of professional interviews with him, as well as personal conversations”. And she adds that she has written MB&F’s press releases “for quite a few years now”. She concedes that her biographical essay “doesn’t deviate that much from what we already know about Max, but that’s because all that is exactly how things happened”. 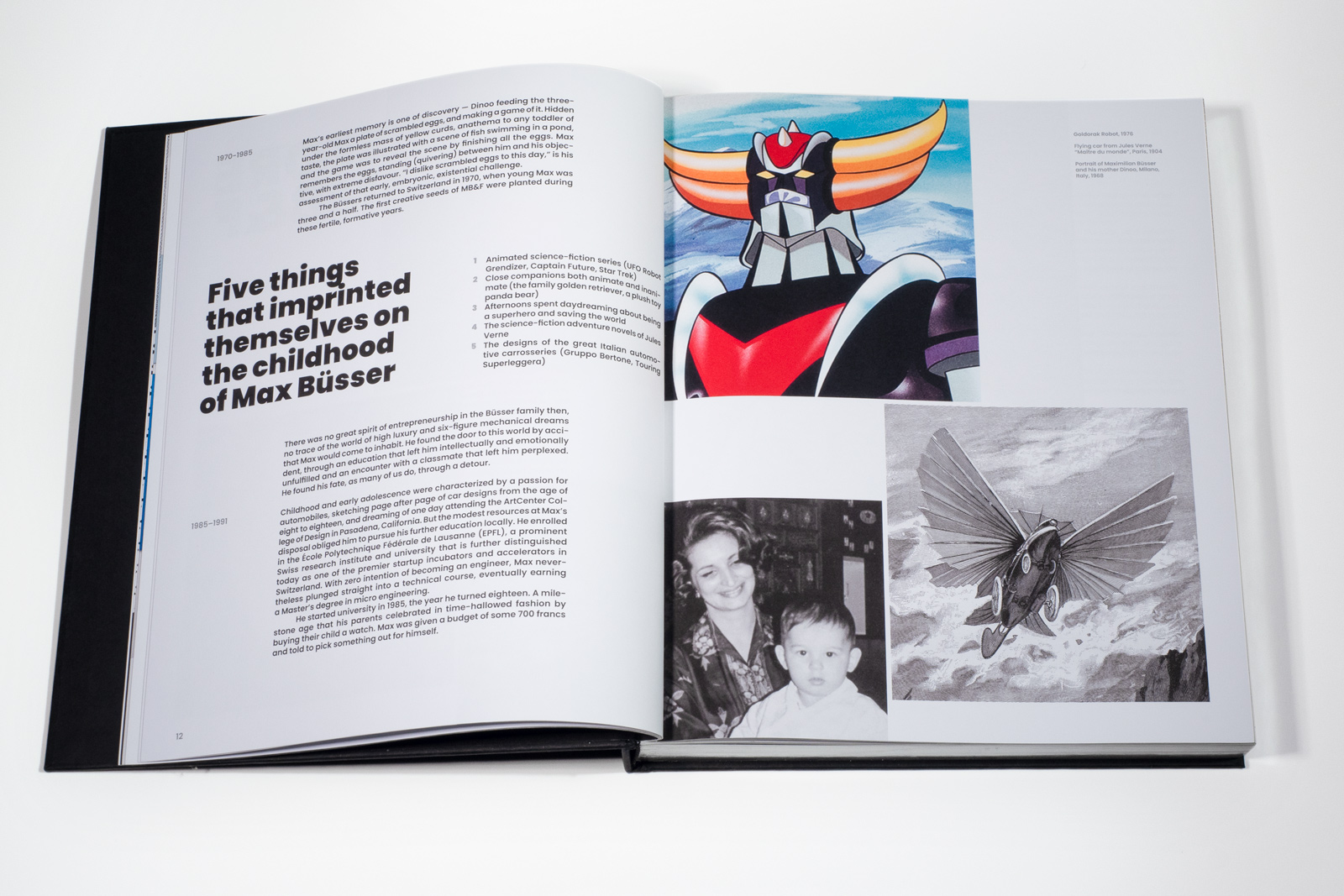 As a result, the first ten pages are an abbreviated biography of Mr Büsser, presenting a story he has related on several podcasts, but here supported with a few personal photos. It covers his family, education, and entry into the watch industry thanks to Henry-John Belmont, then the chief executive of Jaeger-LeCoultre.

It’s followed by Mr Büsser’s time at Harry Winston, a fulfilling adventure made famous by the Opus series of watches and one that paradoxically ended after he was offered a lucrative contract renewal by the jeweller’s new management. According to Mr Büsser, the financial rewards of the contract were accompanied by restrictive competition clauses if he ever departed the company, which would have jeopardised his dreams of one day creating his own watches. 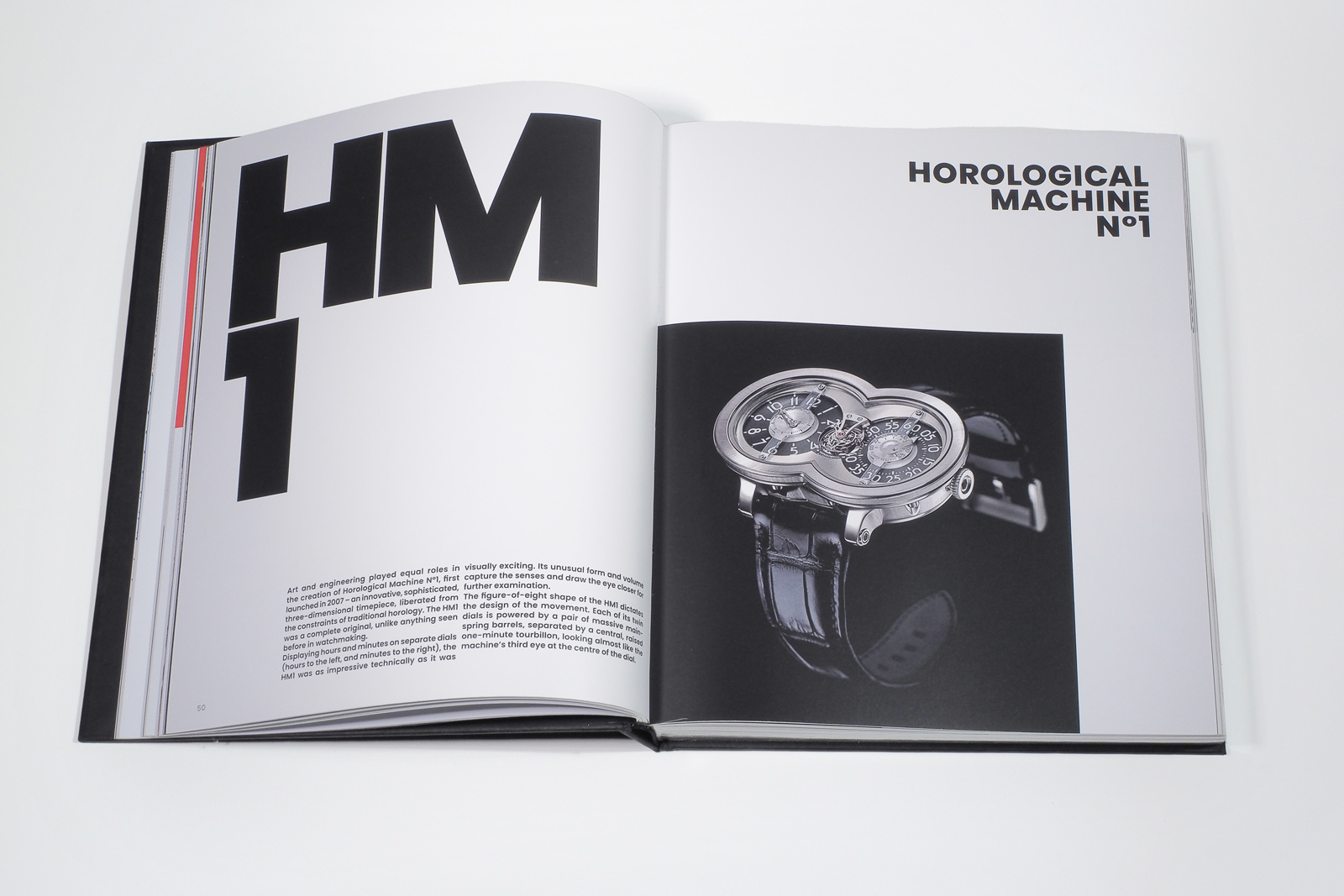 The very first watch by MB&F, the HM1

This chapter also includes sketches of two personalities whom Mr Büsser cites as having influenced the philosophy of MB&F. One is the late Günter Blümlein, whom Mr Büsser met while at Jaeger-LeCoultre, who declared “Creativity is not a democratic process”.

And another is watch designer Eric Giroud, who once accompanied Mr Büsser to an exhibition of works by a Thai artist, where he explained the difference between decoration and art. The latter was represented by the “difficult” charcoal paintings on show – art resulting from the artist’s desire for creative expression, without a care about potential customers. Now we know why asking for a bespoke MB&F creation is in vain.

The following chapter, “Maximilian Busser and Friends”, is 12 pages that are essentially a company history with ups and downs presented chronologically in fast-forward mode. Notably, this section acknowledges that it was not only the designers, movement constructors, and parts manufacturers that Mr Büsser relied on to build his brand, but also the retailers who showed faith in his project when it was just beginning. It was then that Mr Büsser had to collect prepayments to finance production of his first watch, the HM1, which then only existed as a drawing. Without The Hour Glass, Westime, Ahmed Seddiqi & Sons, Chronopassion and Ghadah Jewellery, the success story that is MB&F would likely not have happened.

The “Friends” who were part of the history don’t get their own say, thought there are quotes from 12 people, mostly journalists, in between the chapters in the catalogue section, but those are more statements of fact in the form of testimonials.

The only helpful comments come from designer Eric Giroud who adds product-related explanations about the “coherence behind MB&F’s machines”. With the product-centric concept of the book, I would have appreciated more of such relatable and analytical comments that help the reader to understand the intricacies of the watches.

That said, as is often the case with books that commemorate an anniversary, timelines were compressed, explaining the lack of additional comments from third parties. “The book was a challenge to make because we had very little time and COVID made it impossible for us to meet and discuss the project together,” explained Mr Massena, “It was teamwork but we all worked solo.” And Ms Wong adds that she wrote her section “over my 2021 summer vacation”.

The concluding chapter is titled “The MB&F Effect”, but it is lacking in explanation on how, or if at all, Mr Büsser and MB&F have influenced others, namely collectors, dealers, competitors, or the broader market for independent watchmaking.

Admittedly, such an evaluation would have required substantial time for interviews and research. Considering the time constraints cited by the two co-authors, the “effect” is only described in a cursory but relatable way: MB&F was disruptive and struggling in the beginning but eventually met with success. That is not quite enough of a “critical assessment” that would have done so much to enhance a catalogue raisonné.

Still, truly comprehensive catalogues like this are all too rare in the watch industry, which instead prefers to put out typical brand-history publications that rely too much on marketing departments. Such catalogues are valuable reference tools for enthusiasts and dealers, and would be especially useful for brands like F.P. Journe that now enjoy stratospherically secondary-market values. MB&F should certainly be commended for putting this book together, especially in the narrow timeframe.

Physically, the book is thoughtfully designed. The bold design language used by MB&F in its publicity materials has been translated well into book format. The vivid layout does not get in the way of the information contained on the pages. Importantly, the text content has been printed on uncoated paper while image-heavy catalogue is on glossy paper, which contributes to an enjoyable reading experience. 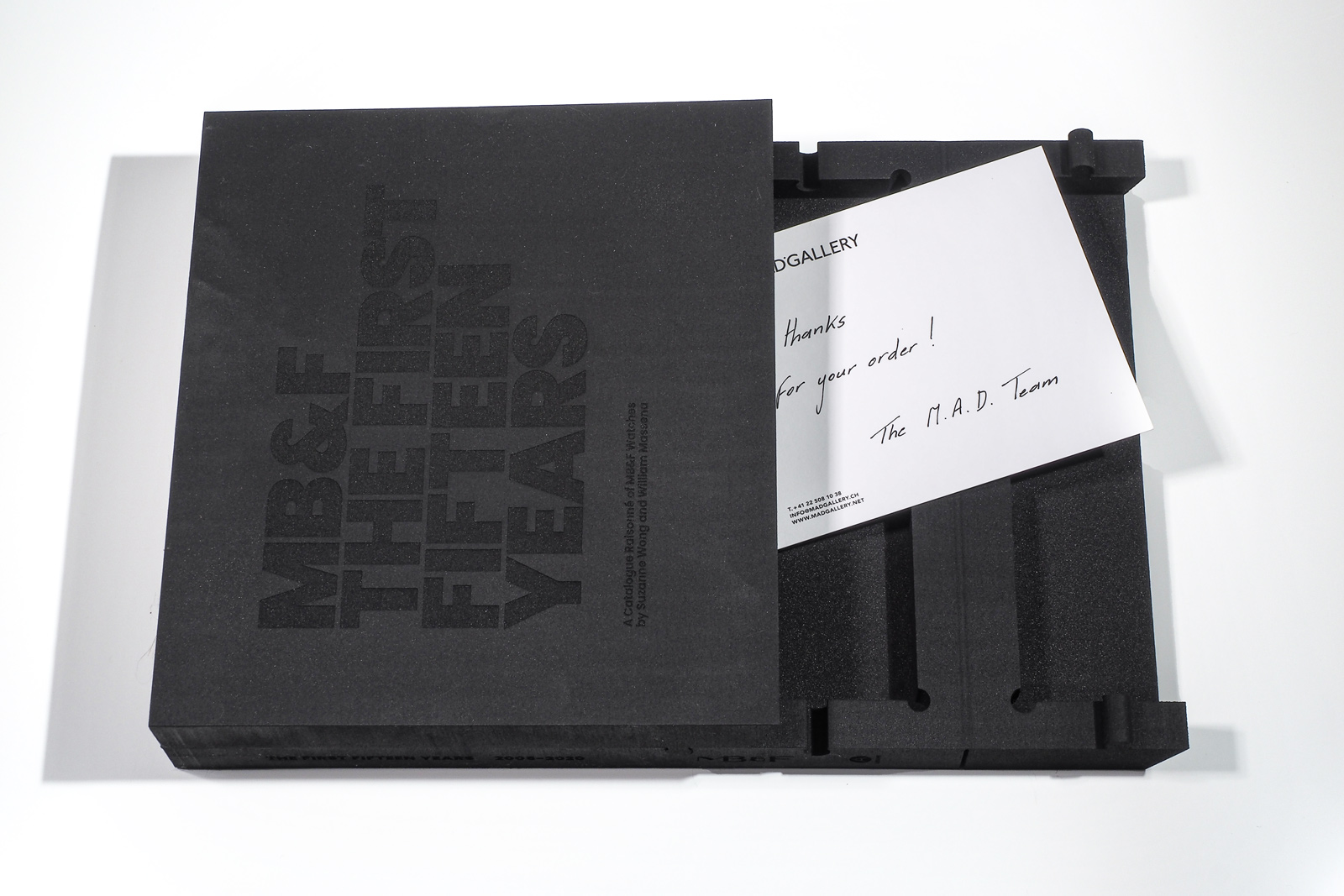 Book lovers who fear crumpled corners will appreciate the clever packaging MB&F created for the M.A.D. Gallery version of the book, a foam case for safe travel that snugly contains the book and is an exact fit for a standard Fedex box with no need for additional packing material

The book’s initial run is 2,000 copies, of which 1,500 are sold by MB&F through its M.A.D. Galleries with a price of CHF198, or about the same in US dollars. This “Gallery” edition is delivered in a protective foam box.

All photos courtesy of the author except for header image that is supplied by MB&F.