Launched quietly in May this year, the Radiomir Bronzo PAM00760 is the first substantially new Radiomir model in a long time. Besides being the first Radiomir with bronze case, the PAM 760 is also the first “Events Edition” – a limited-production model that will only be available during dinners hosted by Panerai chief executive Jean-Marc Pontroué.

Oversized and cleanly designed in the historical Panerai style, the Radiomir Bronzo is also the first step in the rejuvenation of the Radiomir line, which will see the addition of several new models in 2023. According to Mr Pontroué, the Radiomir will now be a range of watches that are largely historically inspired in terms of design. With that in mind, I would expect the “California” dial to return. 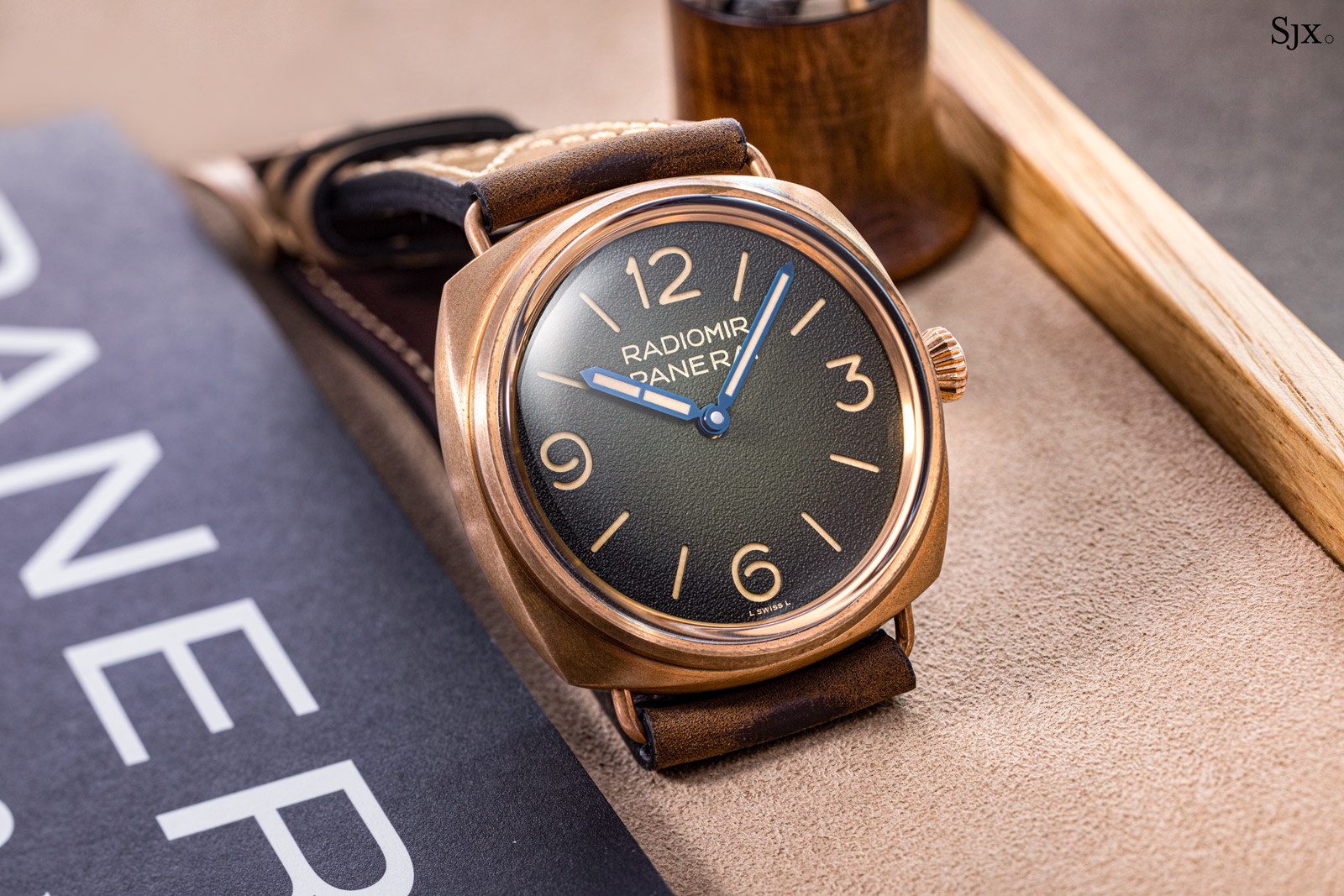 Available at dinner, and maybe lunches too

Big, thick, and looking very much like a Panerai on the wrist, the Radiomir Bronzo is appealing to anyone who likes the old-school Panerai look. While it does look like a typical Panerai, the Radiomir Bronzo manages to be fairly novel, at least as novel as a Panerai can be while still retaining its trademark design elements.

Besides being the first Radiomir in bronze – past models in the metal were all Submersibles – it also has a textured dial that’s fairly novel for the brand. But the textured finish is combined with traditional elements, a “sandwich” construction and blued hands. Overall it’s a good look, although I find the stitching on the strap excessive. The textured dial in smoked green

While not a limited edition model, the Radiomir Bronzo is limited in terms of availability – it will only be available during dinner events hosted by Mr Pontroué. Consequently, its annual production should be in the low hundreds, making it a fairly uncommon watch, which does add to the appeal. 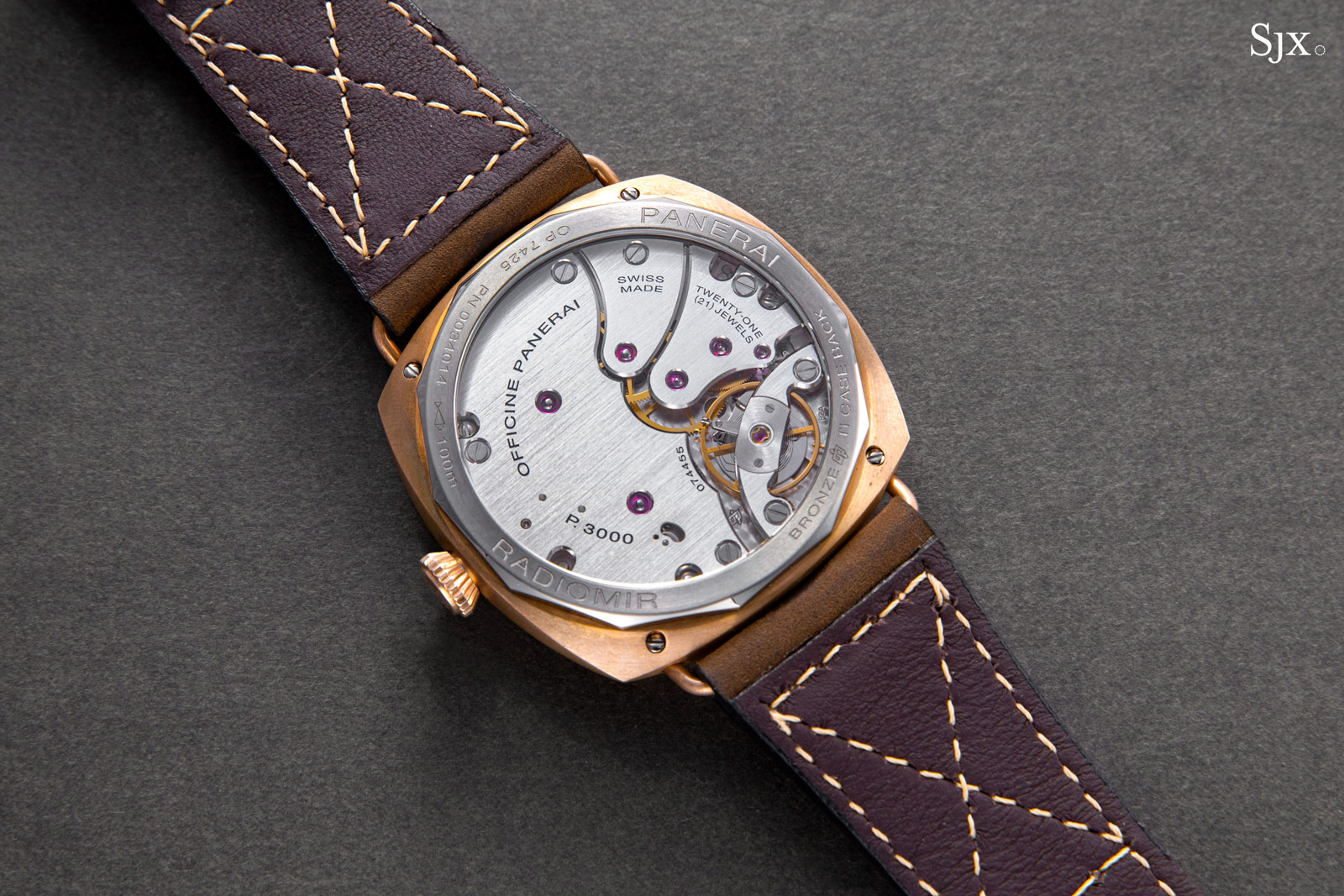 I like the look, I like the feel, and I like the way it’s being sold since limits production numbers – even if the event-only availability is slightly pretentious.

However, I don’t like the price – retail is US$17,800 – which is just over double that of a comparable steel Radiomir. The price would have been more palatable if the watch had been executed with a more elaborate dial – for instance a precious metal dial plate – or a higher-end movement.

Rather than being priced according to its intrinsic features as well as the rest of the catalogue, the Radiomir Bronzo has been priced according to the high secondary market values of the brand’s other bronze watches. In one respect, however, the price is fair: the Radiomir Bronzo costs almost exactly the same as the Submersible Bronzo PAM00968, which is similarly too expensive for what it is.

Price aside, the Radiomir Bronzo is a compelling watch and certainly a good promising indicator of what’s to come for the Radiomir line. 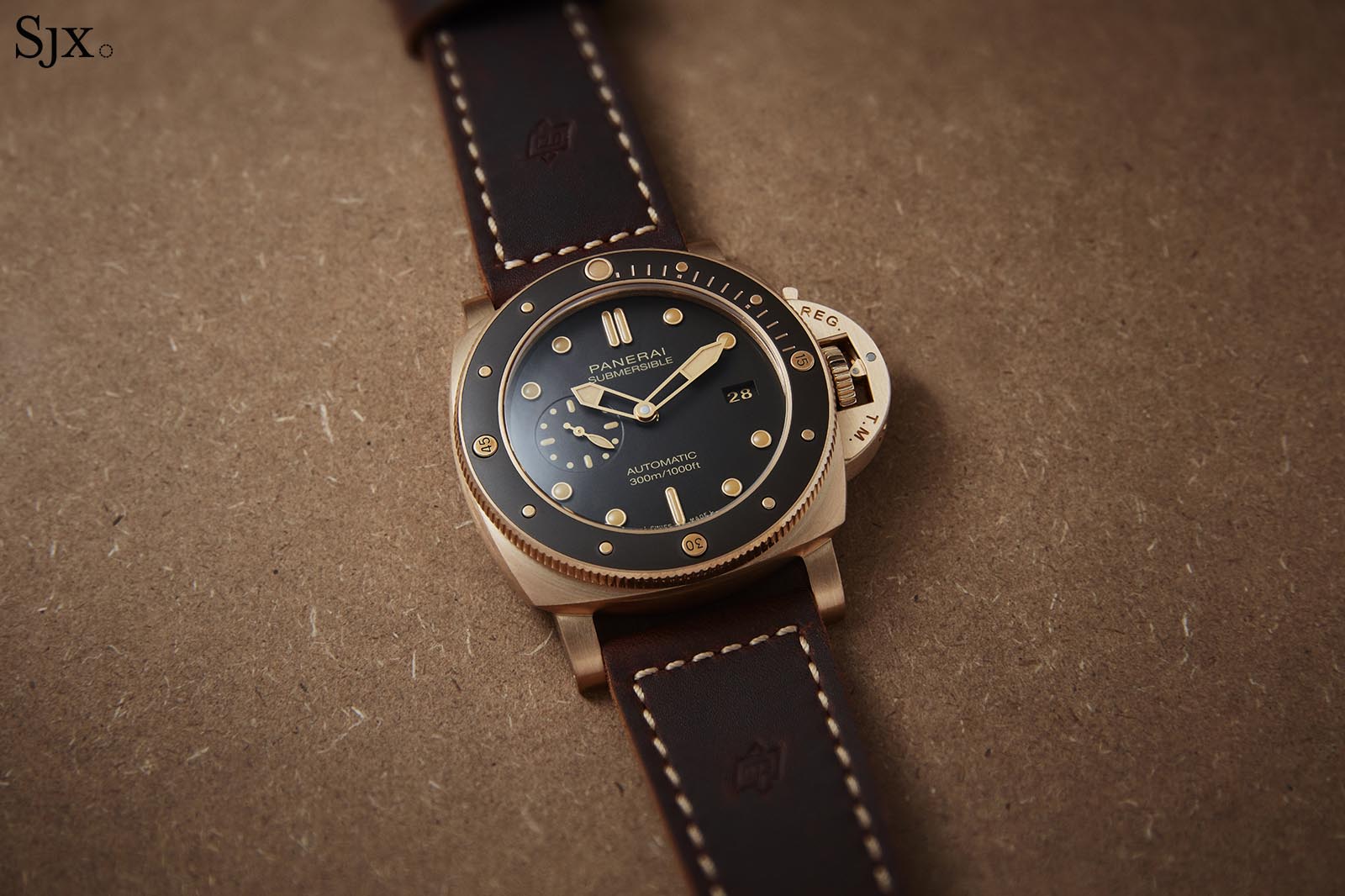 The case of the Radiomir Bronzo is made of the same bronze alloy Panerai uses for the Submersible Bronzo models. Primarily copper with a bit of tin, the alloy has a bright, coppery tone when new but quickly darkens as the patina develops, a result of surface oxidisation of bronze.

Typically the alloy develops a dull brown hue over time, though in extreme cases of oxidisation it can be covered in verdigris. A modest patina is appealing and adds to the dive-instrument aesthetic, but too much and it resembles something lost at sea that no one wants to find. (In contrast, the alternative bronze alloy used in watchmaking by brands like Tudor develops a brown-grey patina due to its high aluminium content). Like Panerai’s other bronze watches, the case has a brushed finish that helps the process of oxidisation. The brushed finish also gives the watch a convincing maritime instrument aesthetics.

And it has a titanium case back naturally. A case back in steel or titanium is the norm for bronze watches simply because prolonged contact with bronze can cause an allergic reaction. The brushed finish helps with the oxidisation process 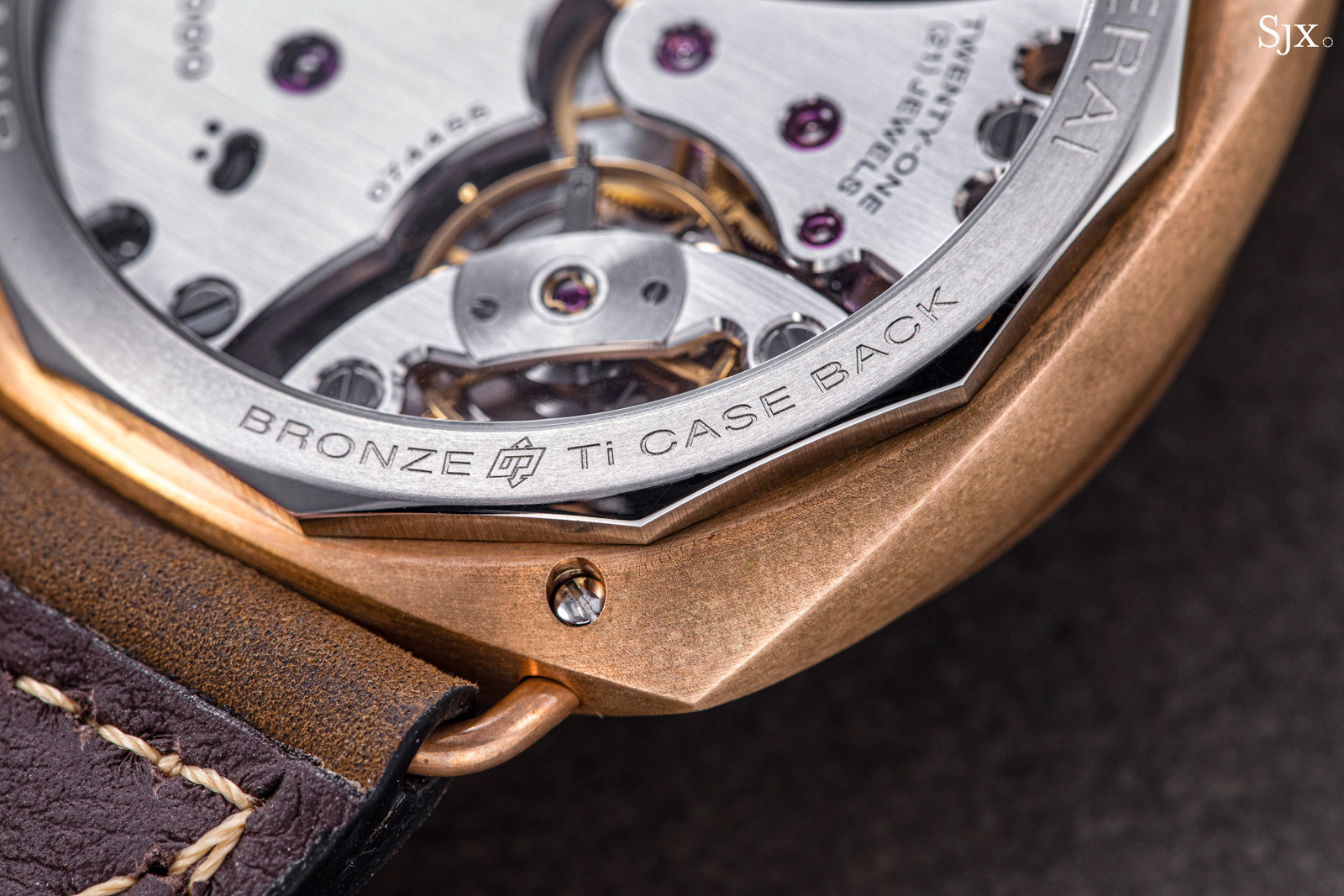 The titanium back is screwed down The “Pre-V” style buckle is bronze

The case is 47 mm in diameter, which is the largest Radiomir size and the one truest to the historical originals. While the 47 mm sounds large, it doesn’t wear as large due to the wire lugs that sit close to the case. The case is, however, very thick at about 16 mm high and looks the part. 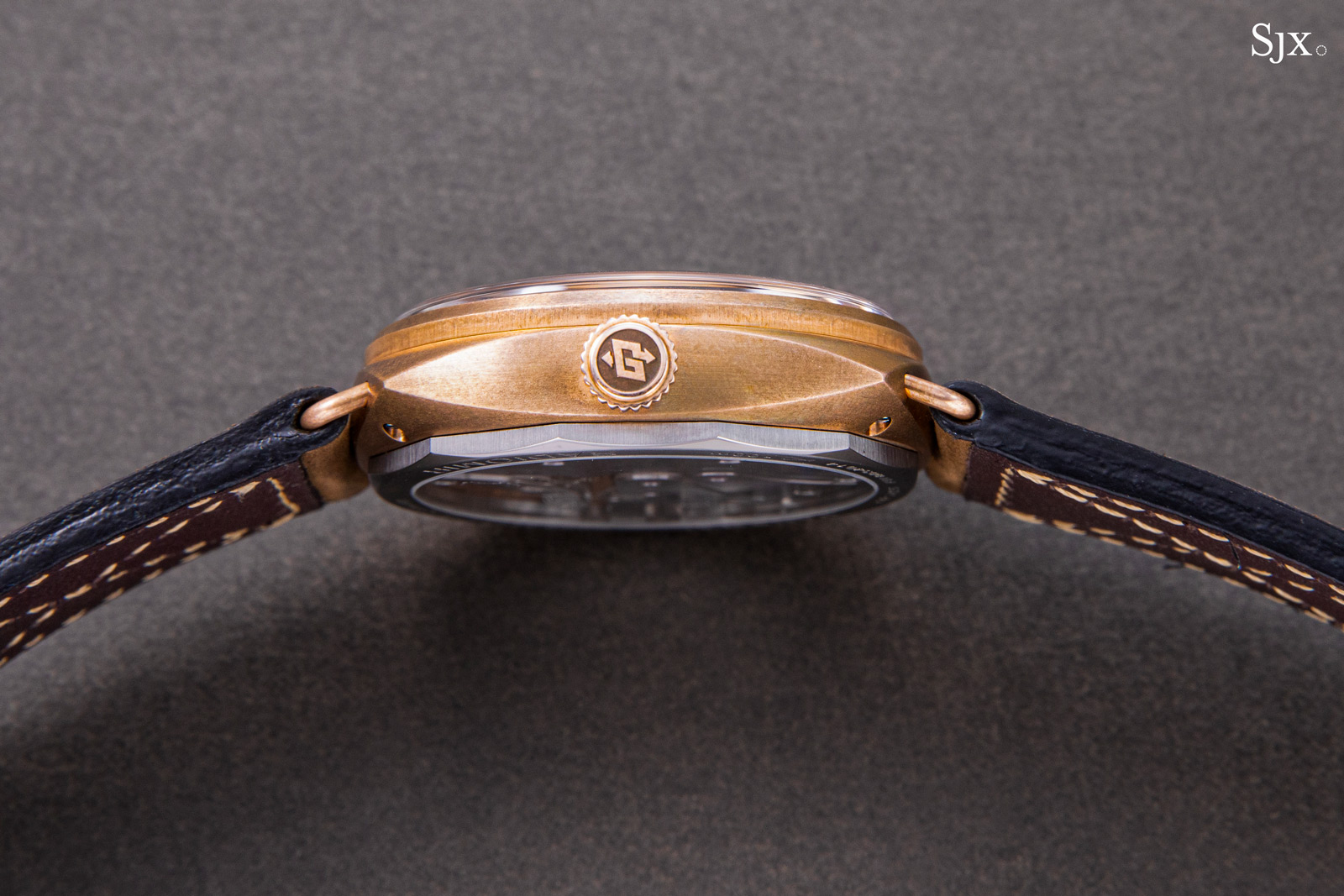 The bulbous look is compounded by a domed crystal of PlexiGlas. Though the plastic crystal is not scratch resistant – and it creates a minor visual distortion of the edge of the dial – but PlexiGlas does have a slightly vintage flavour that goes well with the watch.

There’s nothing I would change about the case, except for the strap. The “box X” stitch on both sides of the strap is unsightly and also unnecessary since this type of stitch is usually meant for reinforcing two pieces of material. Fortunately, swapping straps on a Panerai practically synonymous with the brand. With the large Arabic numerals at the quarters, the dial is classic Panerai with both an engraved logo under 12 o’clock as well as a sandwich construction, both details inspired by the dials on vintage originals.

And the Super-Luminova is a familiar ecru, which suits the look perfectly. While such faux-vintage lume is overused today, Panerai was one of the first brands, maybe even the first, to do make liberal use of the substance, so it looks and feels correct here. The novelty of the dial lies in the graduated colour and textured surface. At the centre it’s a dark green that quickly darkens towards the edges, enough that the edge of the dial is black. Notably, the dirty green harks back to the dial colour of the original pair of Bronzo watches, which were arguably the best looking of the Submersible series.

The smoked finish is combined with a granular, stamped texture that hasn’t been widely used by Panerai (yet). At a distance the grained surface gives the dial an aged appearance that pairs well with its general aesthetic. All the elements of the dial work well together, well enough that I expect Panerai will iterate the same elements into new combinations for future models.

In fact, word has it that Panerai will unveil a pair of new Radiomir models with near-identical dials at the end of the year. The PAM01334 and PAM01335 will have dials in grey and blue respectively, along with a case in “aged” steel like the Radiomir PAM00992. 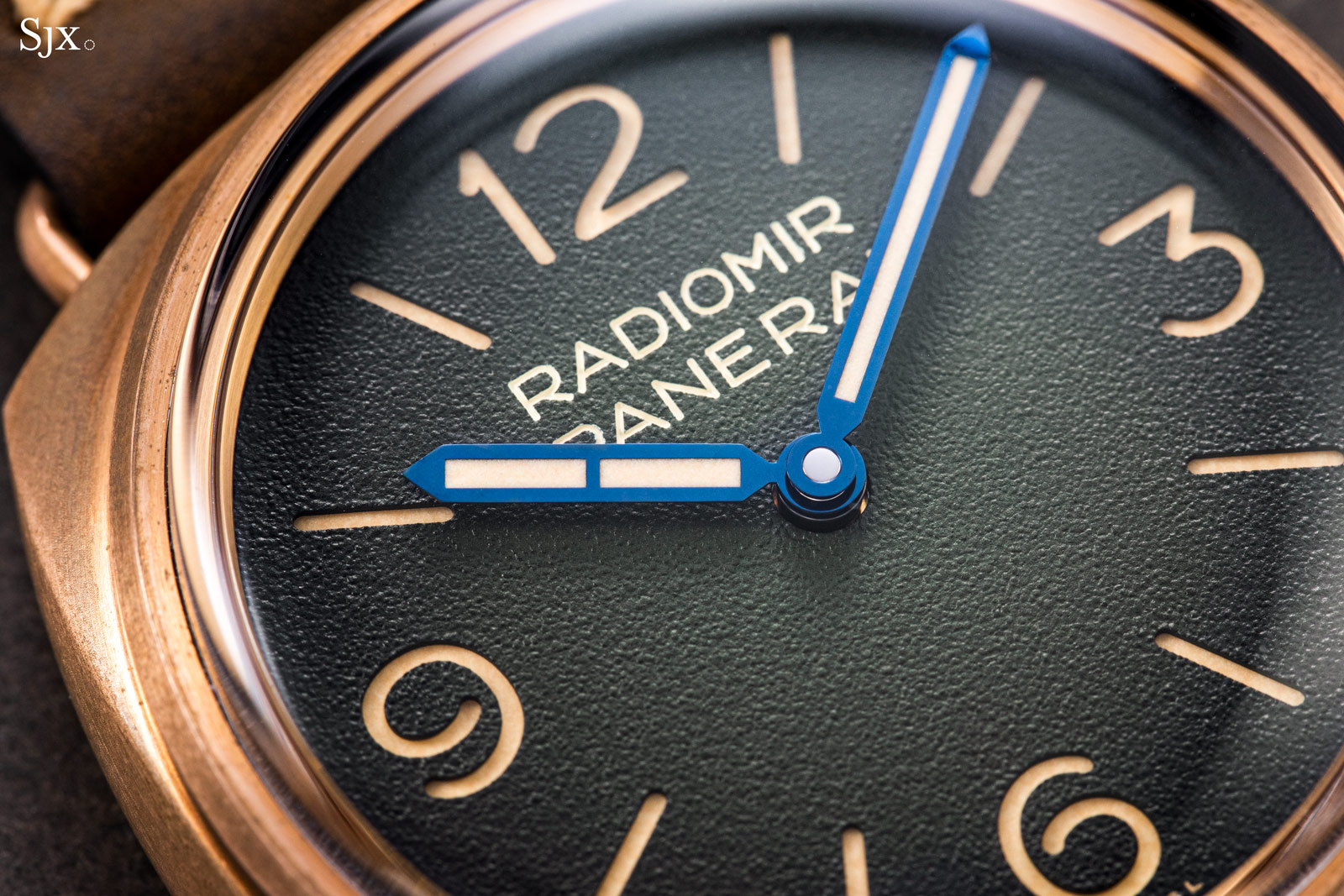 The Radiomir Bronzo is powered by the same calibre found in most of Panerai’s hand-wind 47 mm models, the P.3000. It’s a simple workhorse conceived to replace the even simpler Unitas movement widely used in the earlier generation of Panerai watches. 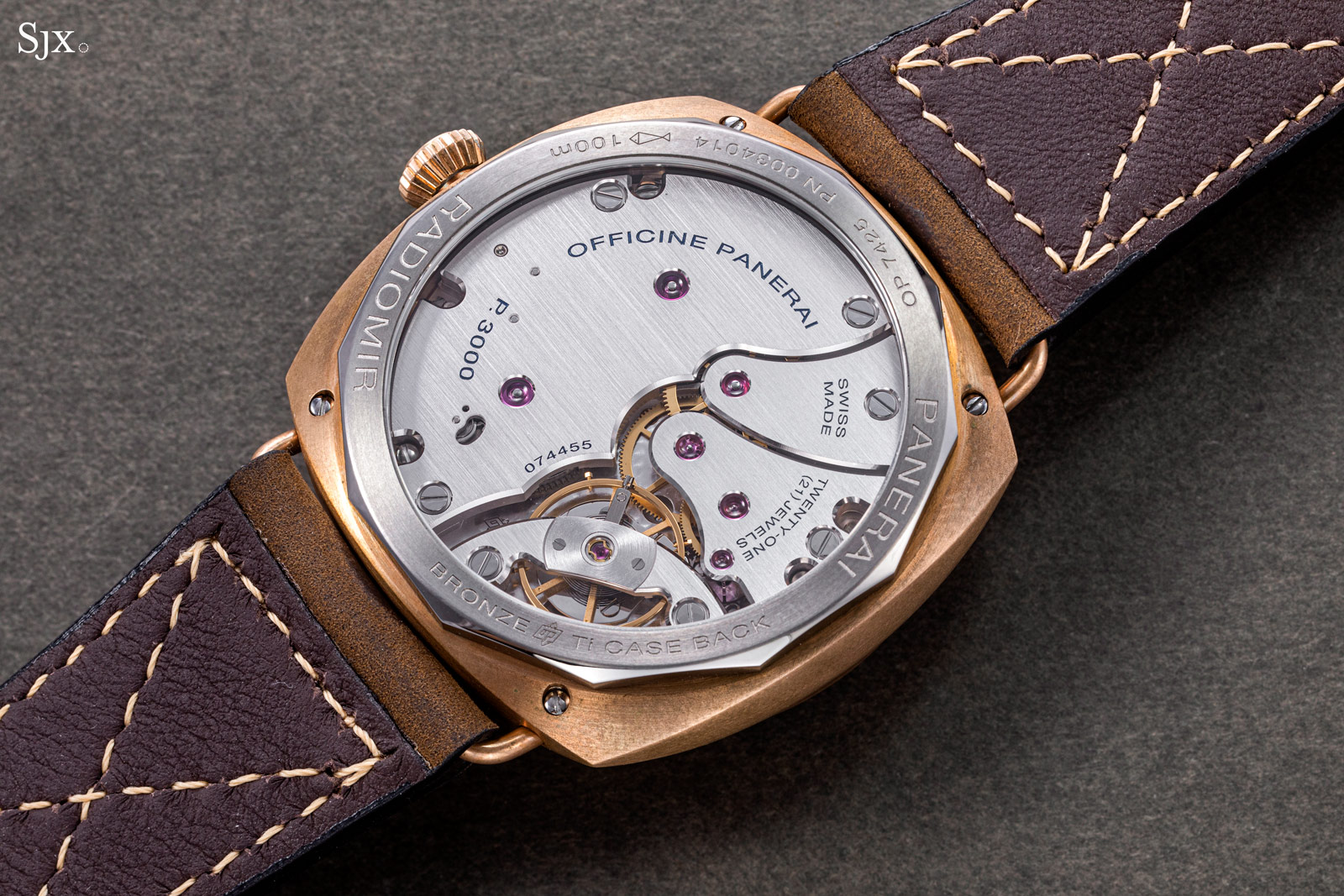 The aesthetics of the movement are typical of Panerai – the bridges are large and linearly brushed, while the decoration is neatly done by machine 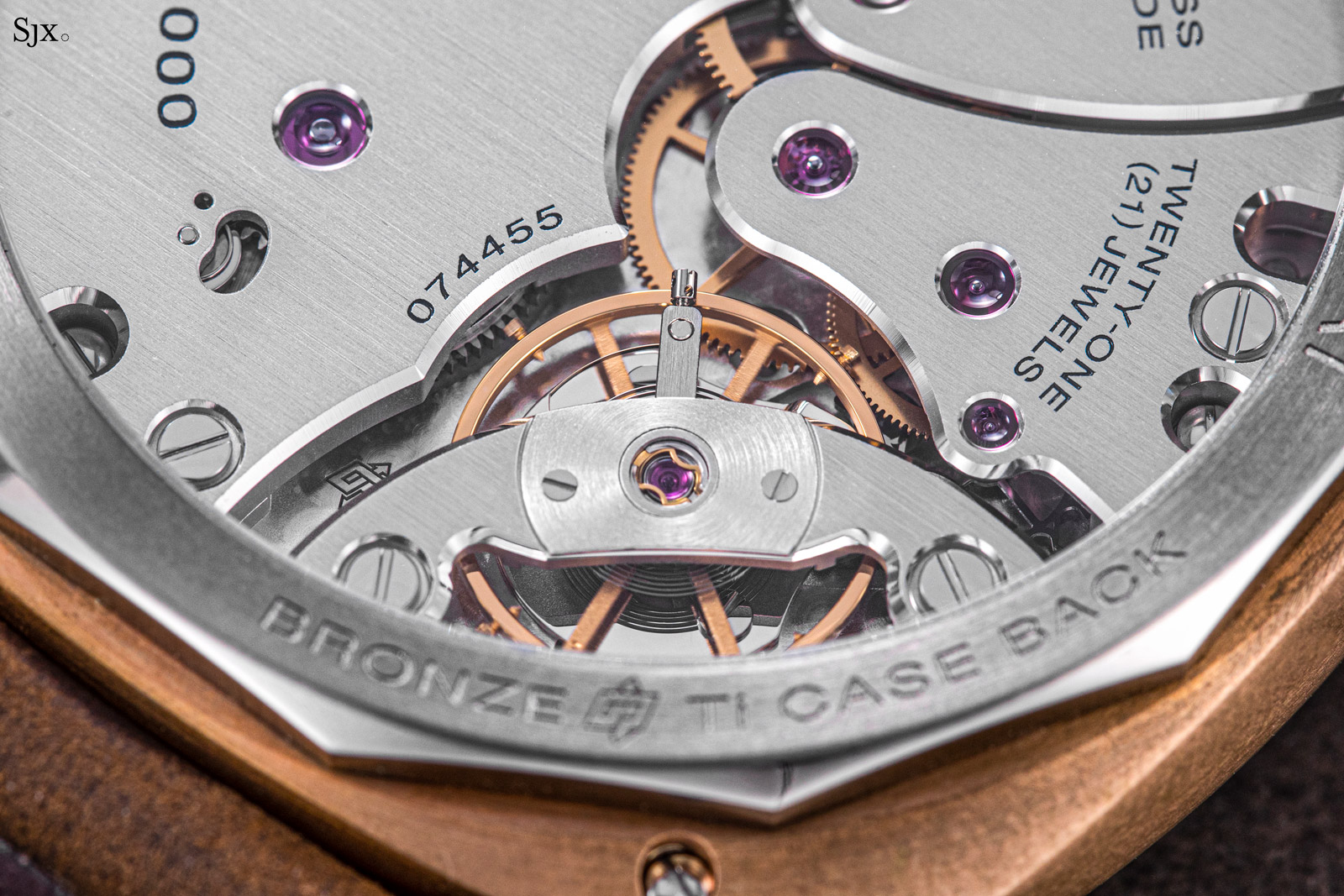 The engraved text on the bridges is filled with blue lacquer, a trademark feature of Panerai’s in-house movements While the construction is straightforward and the finishing industrial, it does have two useful features, namely the free-sprung balance and twin mainsprings that provide a three-day power reserve.

The P.3000 is good enough for most of the watches it’s found in, but considering the price of the Radiomir Bronzo it could do with a fancier movement or even a P.3000 that’s been dressed up in some form. 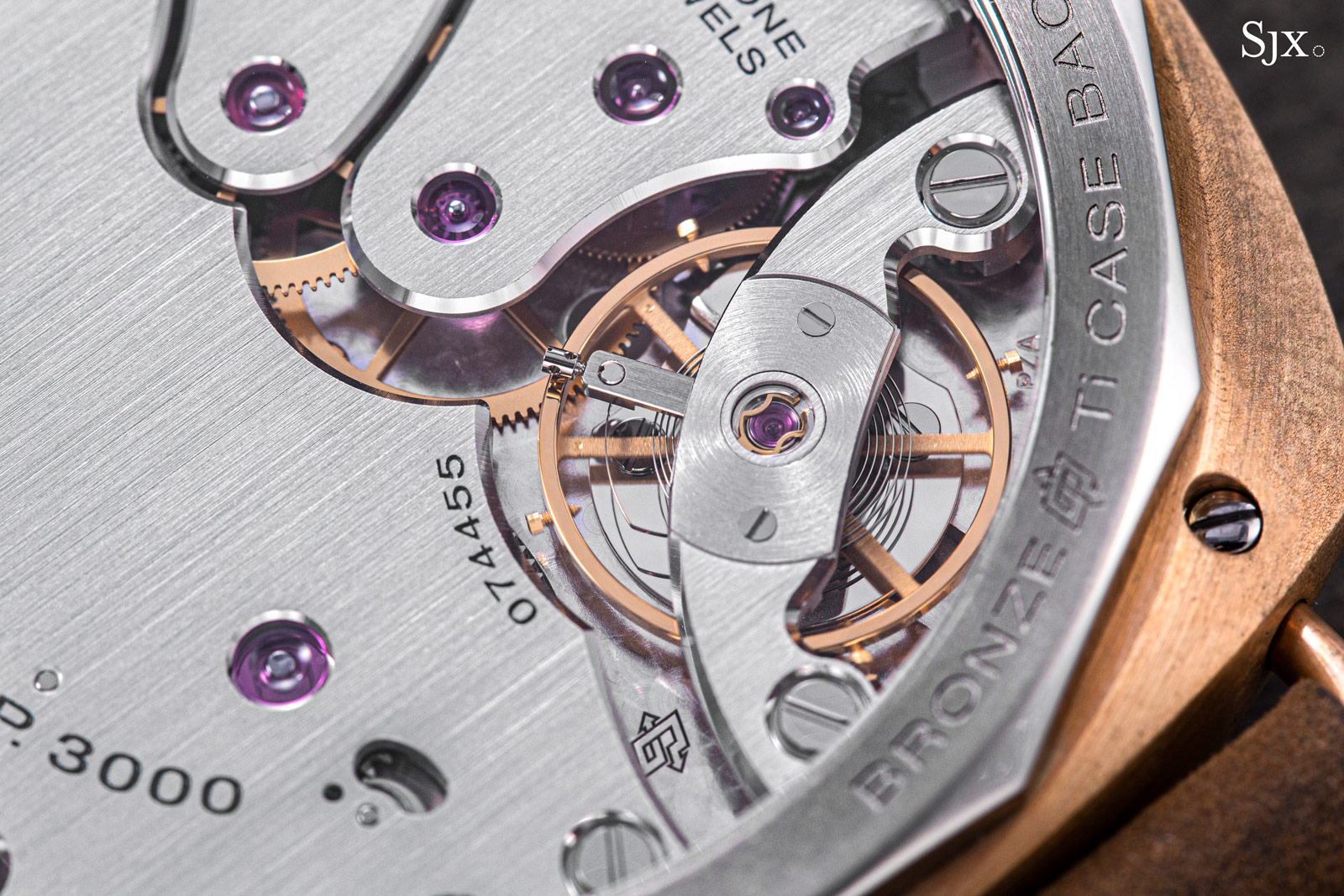 The four-arm balance with adjustable regulating weights on its rim

The Radiomir Bronzo is appealing on several levels. It has a largely traditional Panerai design while still being different in terms of materials and style. And the case material is one strongly associated with Panerai, more so than most other brands. The strap, however, doesn’t work but fortunately that’s an easy fix.

But the Radiomir Bronzo is pricey, though that hasn’t dampened demand as its 2022 production run is already sold out.

Limited edition: No but limited availability
Availability: Only at Panerai dinner events hosted by Jean-Marc Pontroué
Price: US$17,800; or 24,500 Singapore dollars

A Panerai PAM382 Bronzo after a month