Last summer Tudor introduced several Black Bay variants such as the Fifty-Eight 925 and METAS-certified Ceramic. Though one of the most affordable amongst the year’s new launches, the most unique was arguably the Black Bay Fifty-Eight Bronze.

While bronze is not a new material for Tudor – the brand has unveiled several bronze dive watches in the past – it’s a first for the compact Black Bay Fifty-Eight (BB58) and also the first instance of a bronze bracelet. Given the popularity of the standard Fifty-Eight in steel, it leads to the obvious question: is the Fifty-Eight in bronze interesting enough to differentiate itself from its predecessors? With the original BB58 has proven itself a winner, it is logical that Tudor builds on its success with a new palette, case material, and even minor improvements to the case construction. Though it is a Fifty-Eight in name, the Bronze is a very different watch.

For starters, it is the first Tudor dive watch with a bracelet that isn’t steel. More usefully, the bronze bracelet incorporates a newly-developed, micro-adjustment clasp for easy sizing on the fly. 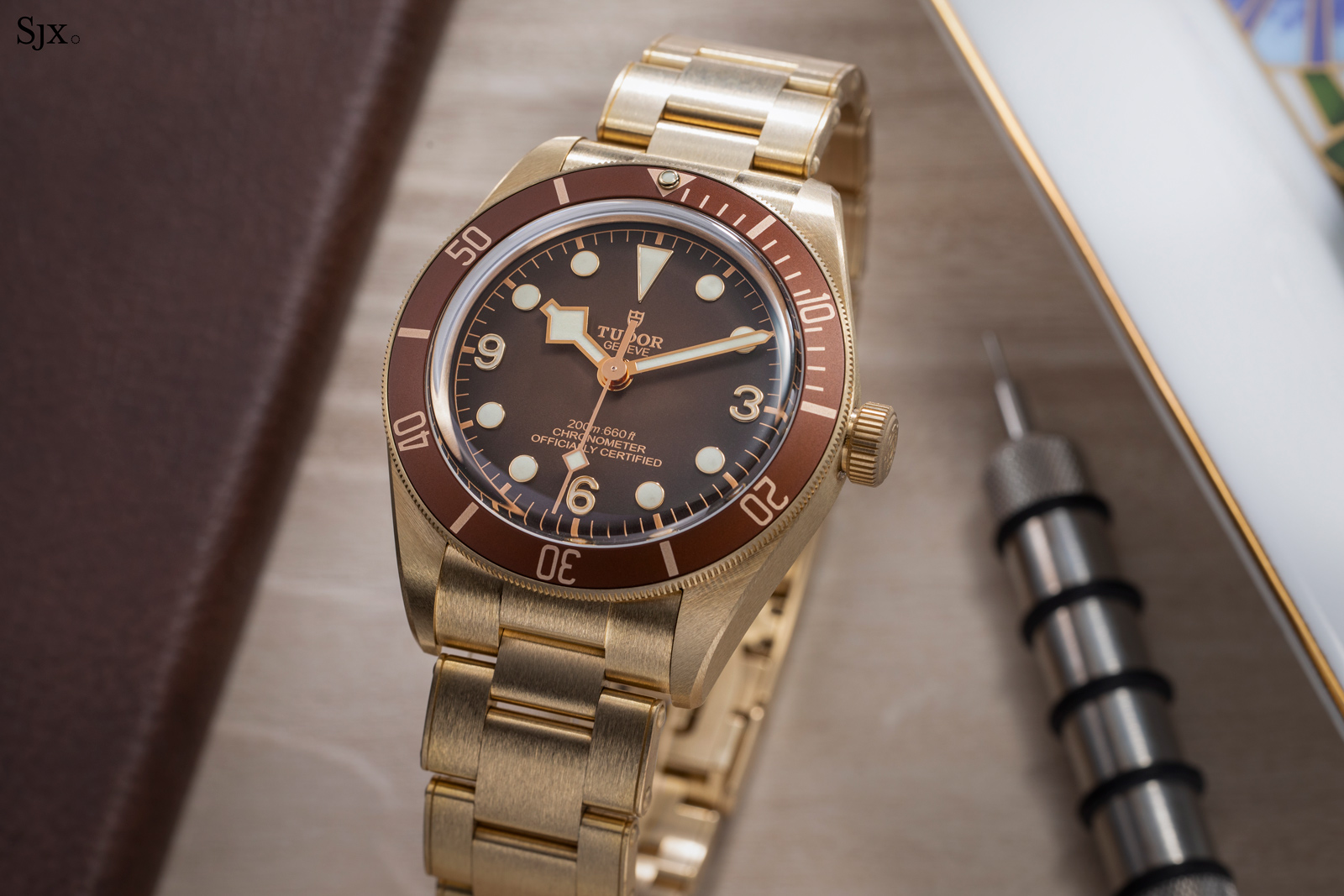 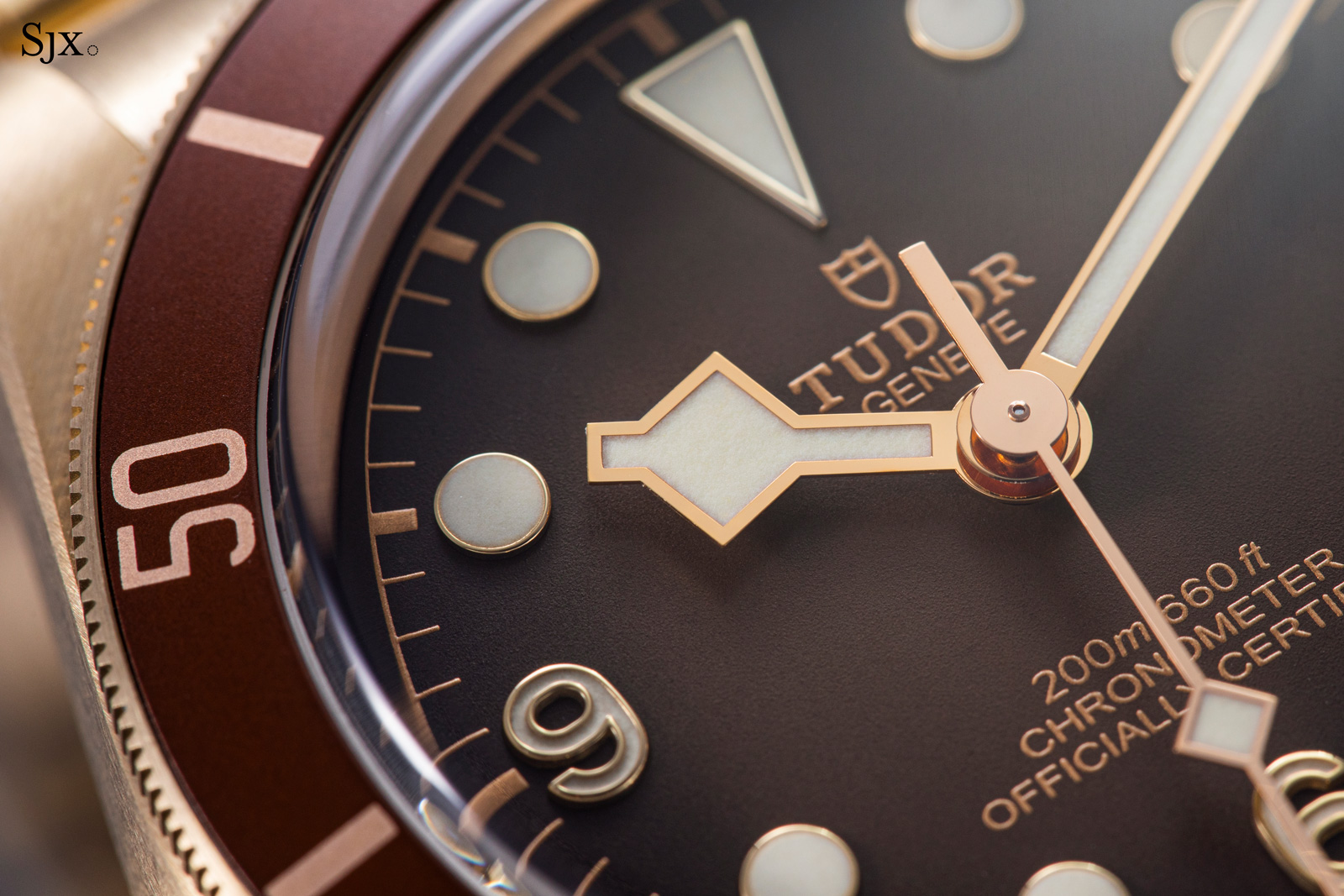 While bronze isn’t rare amongst dive watches in general, it is unusual for Tudor, so credit should be given to the brand for its choice of case material. Tudor doubles down on the material by taking the bold step of using bronze not just for the case but also the bracelet, making this one of the few watches with a bracelet in the metal.

Bronze is popular due to the patina that develops as it ages – conversely that is also the reason it is unpopular.  So for anyone who likes the material, the BB58 Bronze is more of a good thing. But for someone on the fence, end-to-end bronze might be too much. The appeal of the material is highly personal. 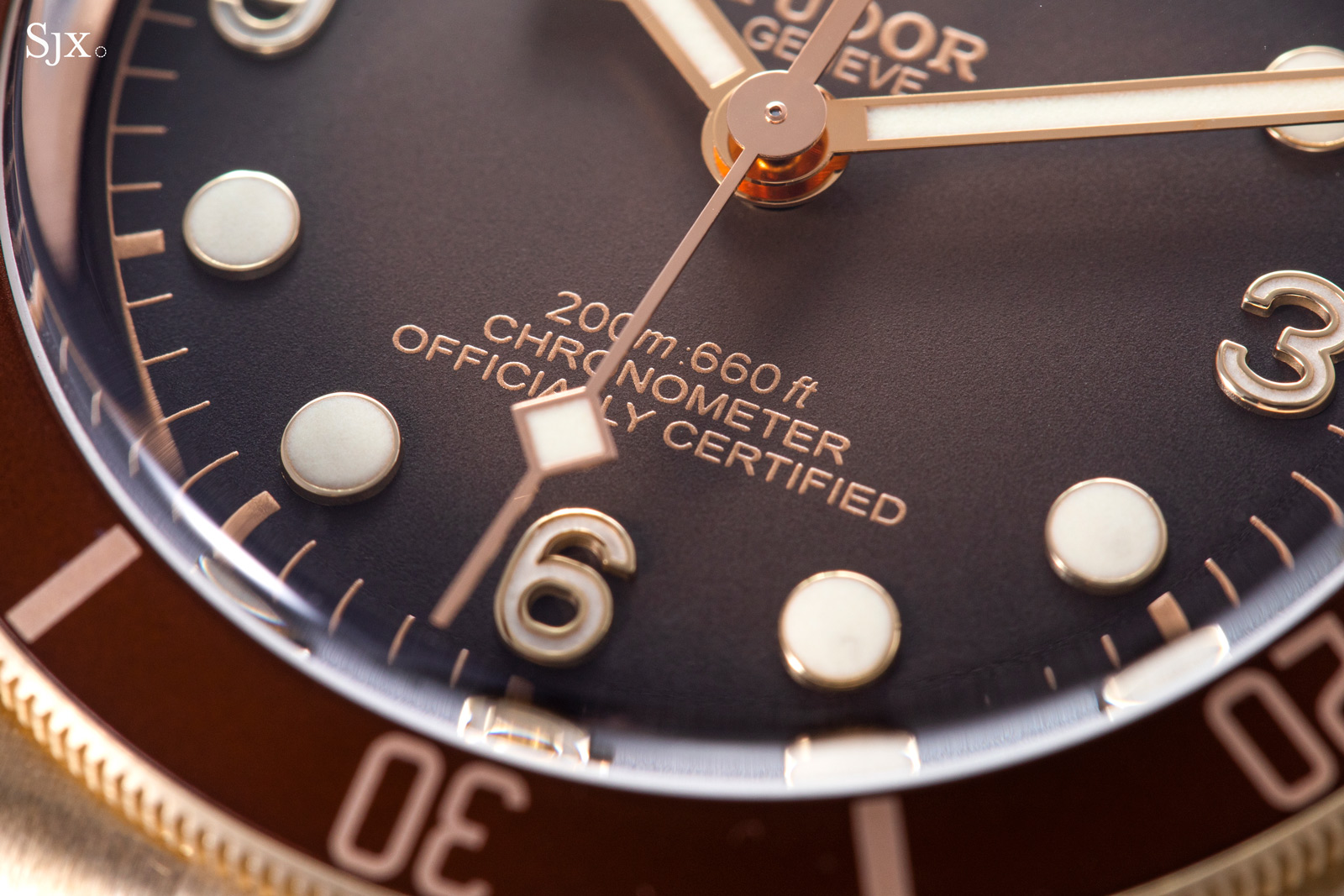 At US$4,625, it’s hard to argue against the value proposition of the Fifty-Eight Bronze. Like all Tudor watches, it is priced competitively. More broadly, even though retail prices for the various Fifty-Eights have crept upwards in small annual increments since their introduction, the line remains affordable.

Notably, the Fifty-Eight Bronze is also Tudor’s first boutique edition, which indicates a new chapter for the brand, namely one of more boutiques, continuing the increasing individuality of Tudor as a standalone brand.

Though the availability is limited given that it’s boutique-only, the Bronze offers strong value given its design, movement, and brand heritage. It is one of the most compelling buys at its price point, which makes it well worth the wait. 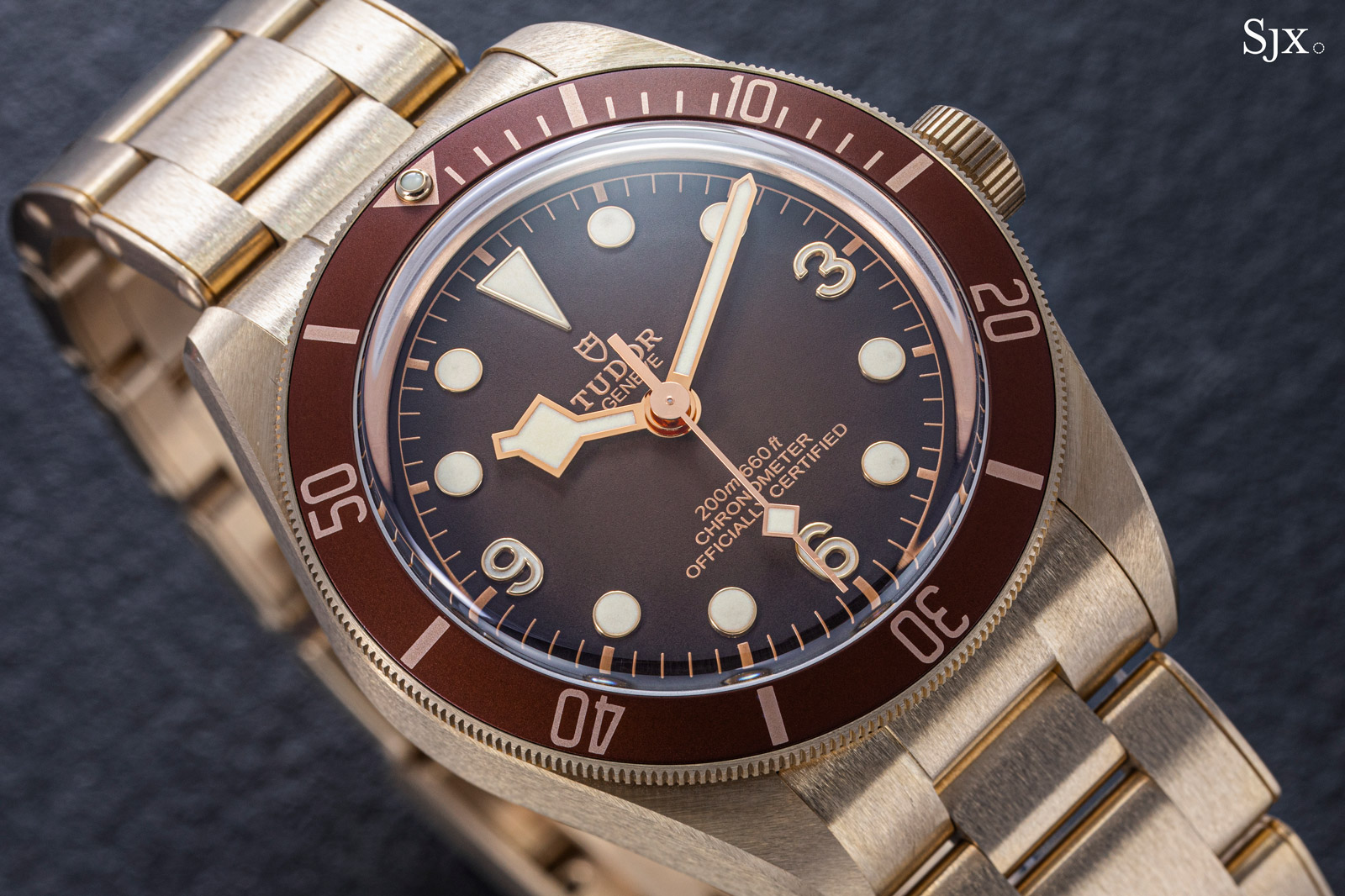 Traditionally, timepieces were largely in gold or steel, so it might be surprising that bronze preceded steel. Even the early adopters of bronze only began using it as a case metal half a century ago – Chronoswiss and Gerald Genta were the pioneers – so the metal is still somewhat of a novelty.

As with its other bronze watches, Tudor uses a bronze alloy that’s atypical compared to the rest of the industry. The conventional alloy for watch cases is comprised mainly of copper and tin, and develops a greenish patina that is copper oxide. Tudor, on the other hand, relies on an alloy where aluminium replaces tin. 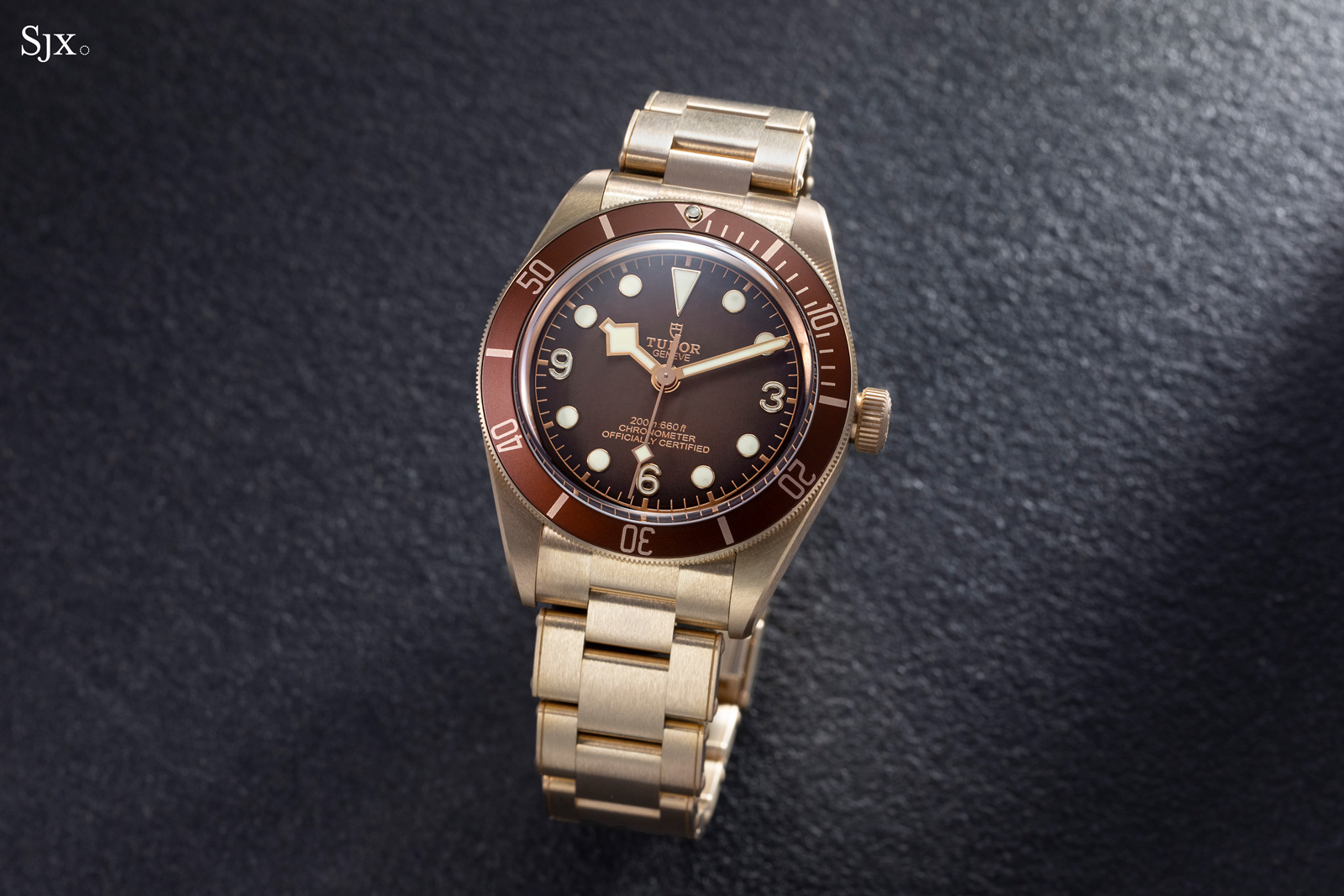 The composition results in a brown-grey patina that is actually aluminium oxide, which encapsulates the alloy and protects it against corrosion. This particular alloy is typically used by the marine and aviation industries because to its corrosion resistance, which means it can be submerged in water, and salt water, for an extended period of time without ill effects. 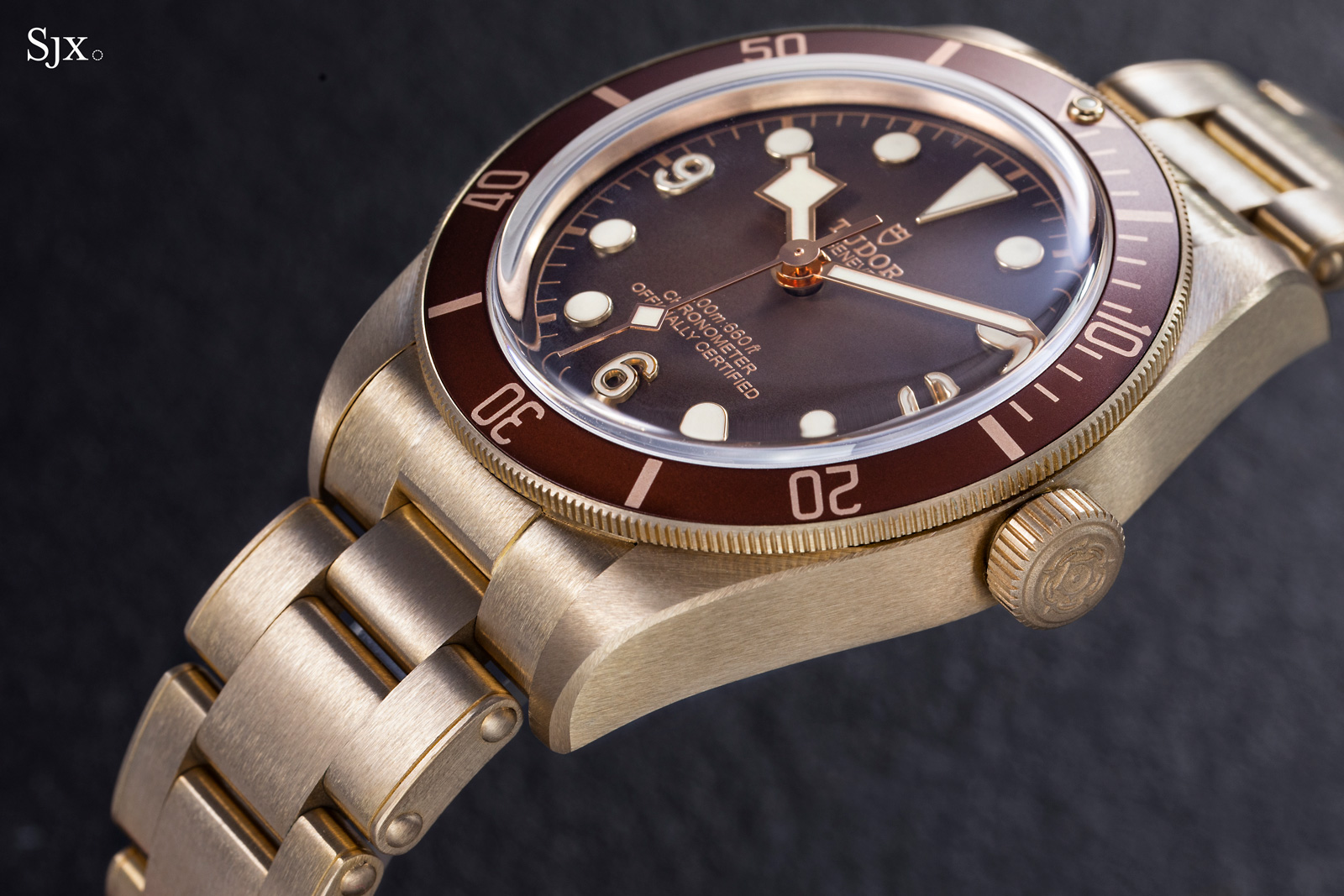 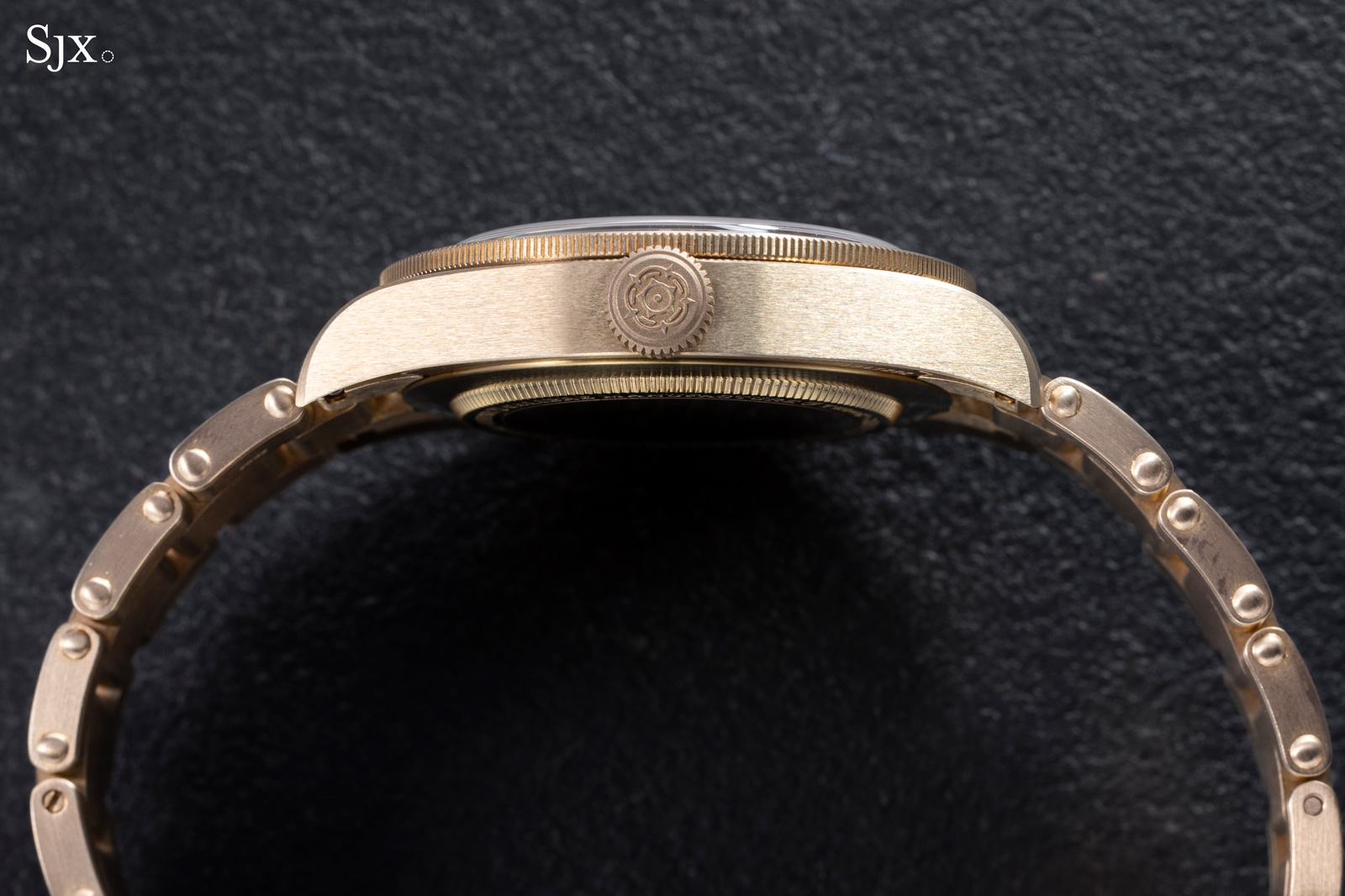 As mentioned earlier, bronze is not commonly used due to its tendency to oxidise. It is more catered to watch enthusiasts who appreciate the changing nature of the material over time.

Tudor slows the process by giving the case and bracelet a brushed finish, which evens out the patina as it develops. The composite of the alloy also means the patina develops more slowly. For those who dislike the aggressive, sunken-treasure look of most bronze cases, the BB58 Bronze will be more palatable.

Beyond its colour, aluminium bronze is also more resilient. According to Tudor, the alloy is 50% harder than regular bronze, which better preserves the brushed finish. However, the hardness of the bronze alloy still pales in comparison to steel. 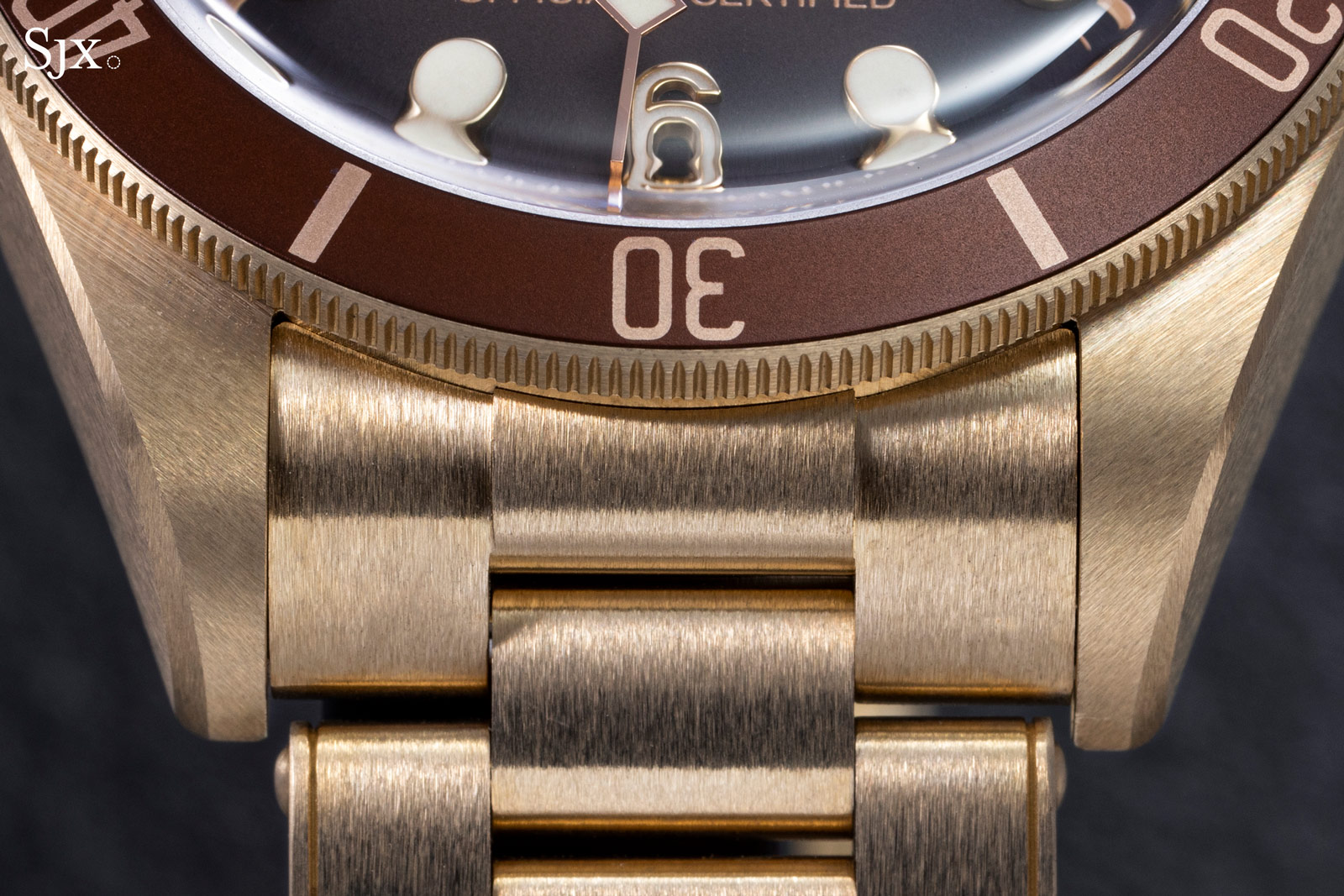 Unique to the BB58 Bronze is the bronze bracelet. Given that most bronze watches have either a fabric or leather band, the bracelet is certainly refreshing.

A bronze bracelet is rare because of the patina that develops with conventional bronze, which is layer of copper salts known as Verdigris, which can be unsightly and also cause the skin to turn green.

But because Tudor’s bronze alloy is of a different composition, its patina is aluminium salt that largely dulls the finish, rather than changes it colour. 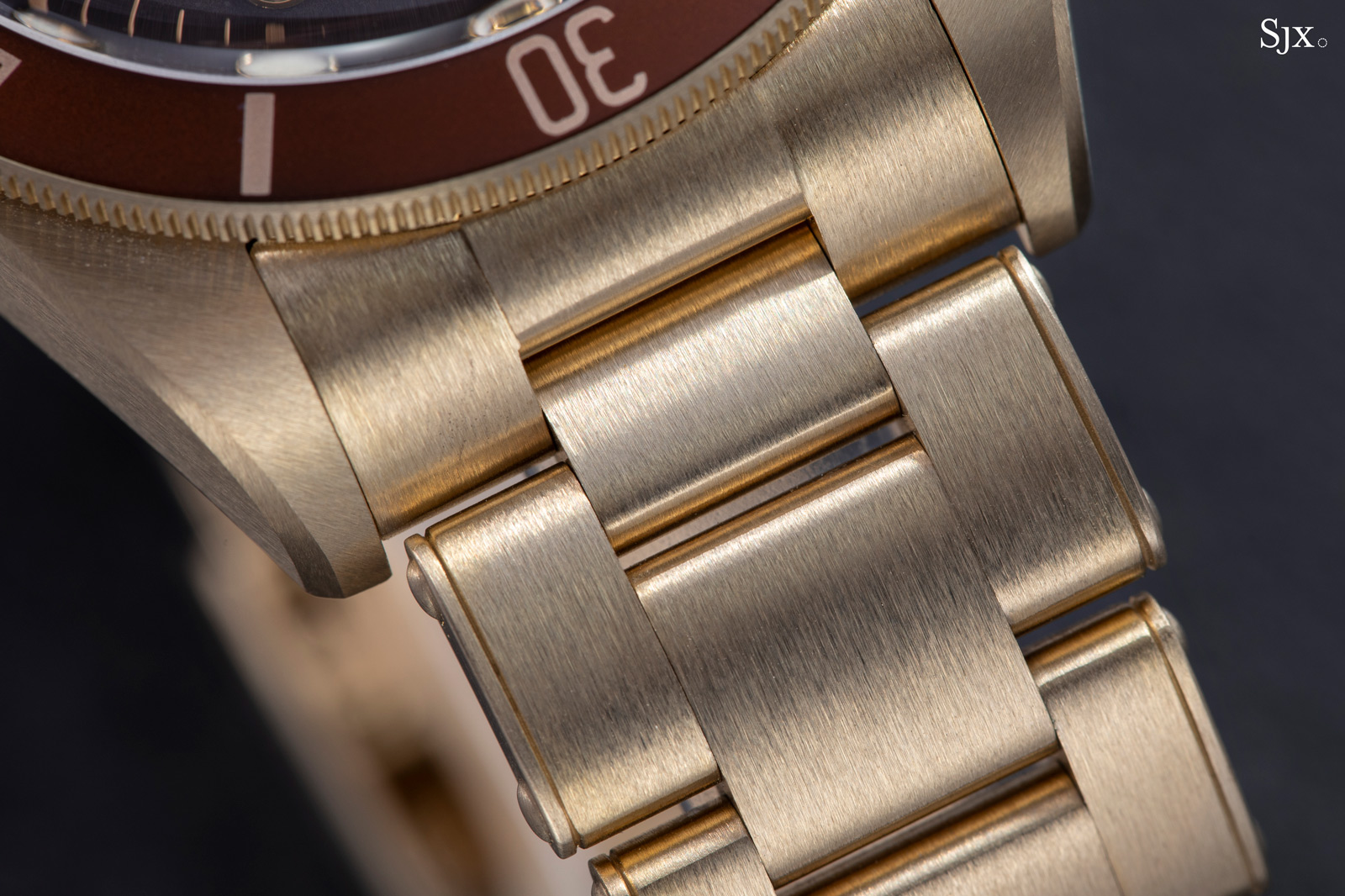 I do appreciate the bronze “rivet” bracelet. It is entirely bronze, including the links, end links, clasp, and even the screws that hold the links together.

While perhaps too affected on the steel BB58, the faux rivets work much better here due to the material, which exudes vintage charm and nostalgia.

The clasp has a new, streamlined design compared to that on the steel BB58. The shield logo found on most Tudor bracelets has been omitted, resulting in a slightly smaller safety lock. 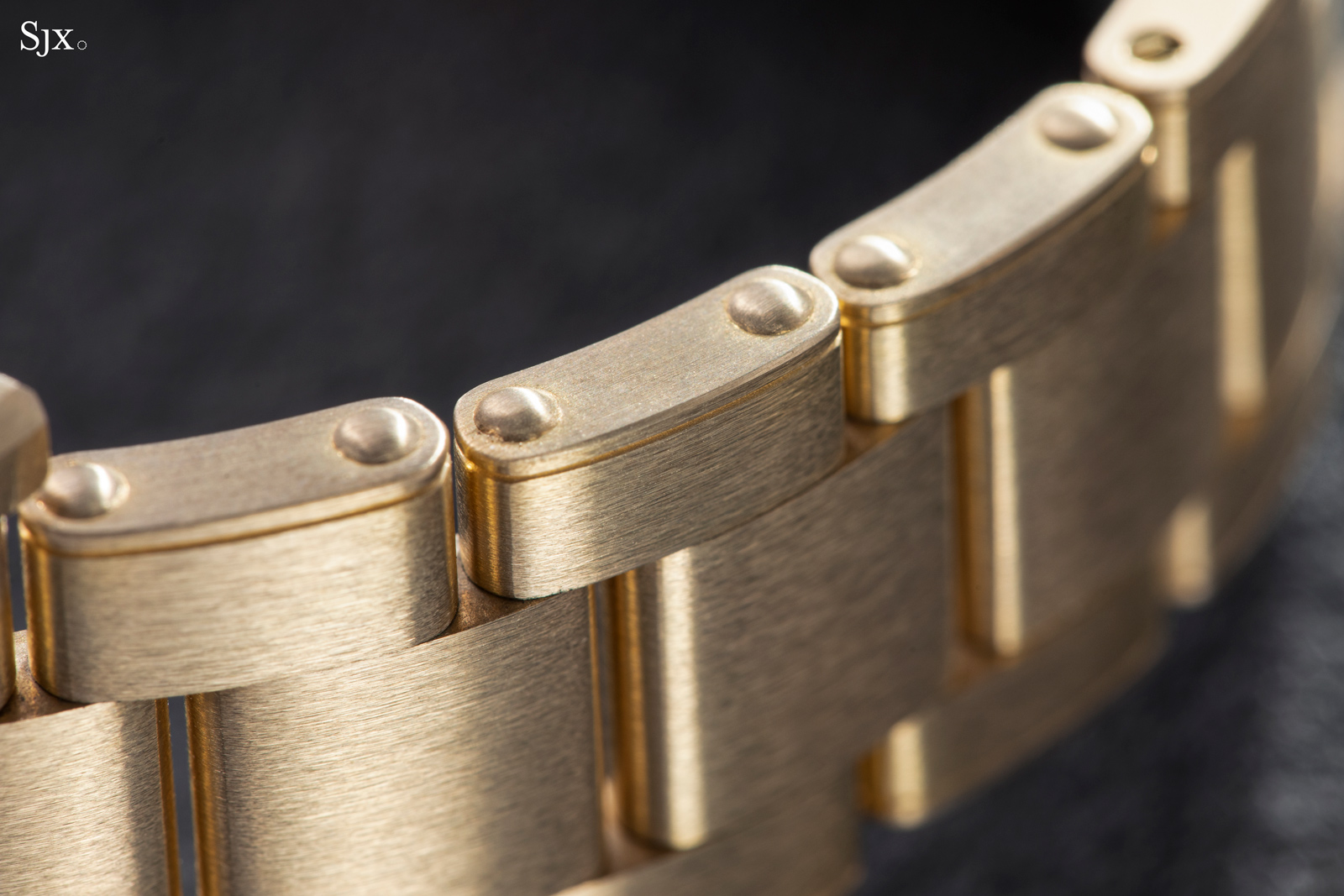 And the clasp now has a rectangular outline, instead of the shield-shaped outline of the standard BB58. The latter clasp has a pointed lower edge that can mark the bracelet where it contacts the links.

Ironically, despite it being an improvement, the redesigned clasp is the only thing I don’t like about the watch. The new clasp looks a bit dated; I like the Tudor shield safety lock on the steel bracelet since it is different but in a subtle manner. 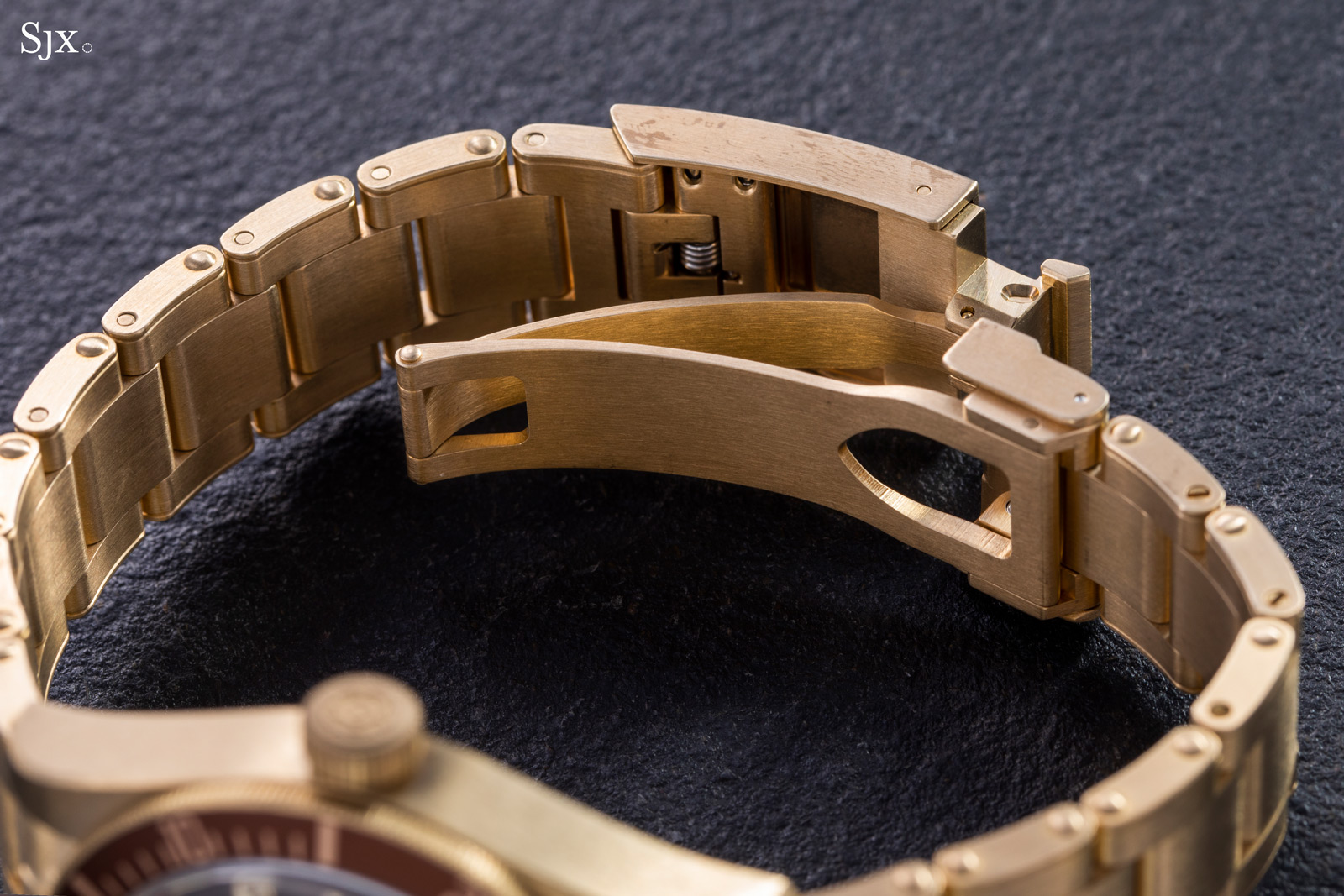 But the most important, and often underrated, feature of the bracelet is the adjustable clasp. Dubbed T-fit, the clasp allows for easy adjustment of the bracelet in five increments, covering a total length of 8 mm.

Technically a diver’s extension clasp to allow the watch to be worn over a diving suit, the clasp is useful for “desk divers”. Since the wrist expands and contracts according to ambient temperature, an on-the-fly adjustment mechanism can cater to that.

While the adjustable clasp is not as novel as that on the Tudor Pelagos (which incorporates an automatic adjustment system), it’s an excellent feature especially at this price point. Aesthetically, the BB58 clasp is also more pleasing than the Pelagos clasp, which requires an aperture on the clasp to accommodate the adjustment system. This new clasp hints at a possible upgrade across the BB58 line, though past releases have shown that Tudor’s application of new inventions is difficult to predict, even within the same line. While it introduced clear case backs and METAs certification for dive watches, subsequent launches did not receive either of those. That said, upgrades are a certainty with Tudor, except that they take a long, long time to proliferate.

The entire watch is bronze, with the exception of the case back that is steel coated with a bronze-tone finish. This is the norm for bronze watches as the metal can cause an allergic reactions on the skin with prolonged contact. 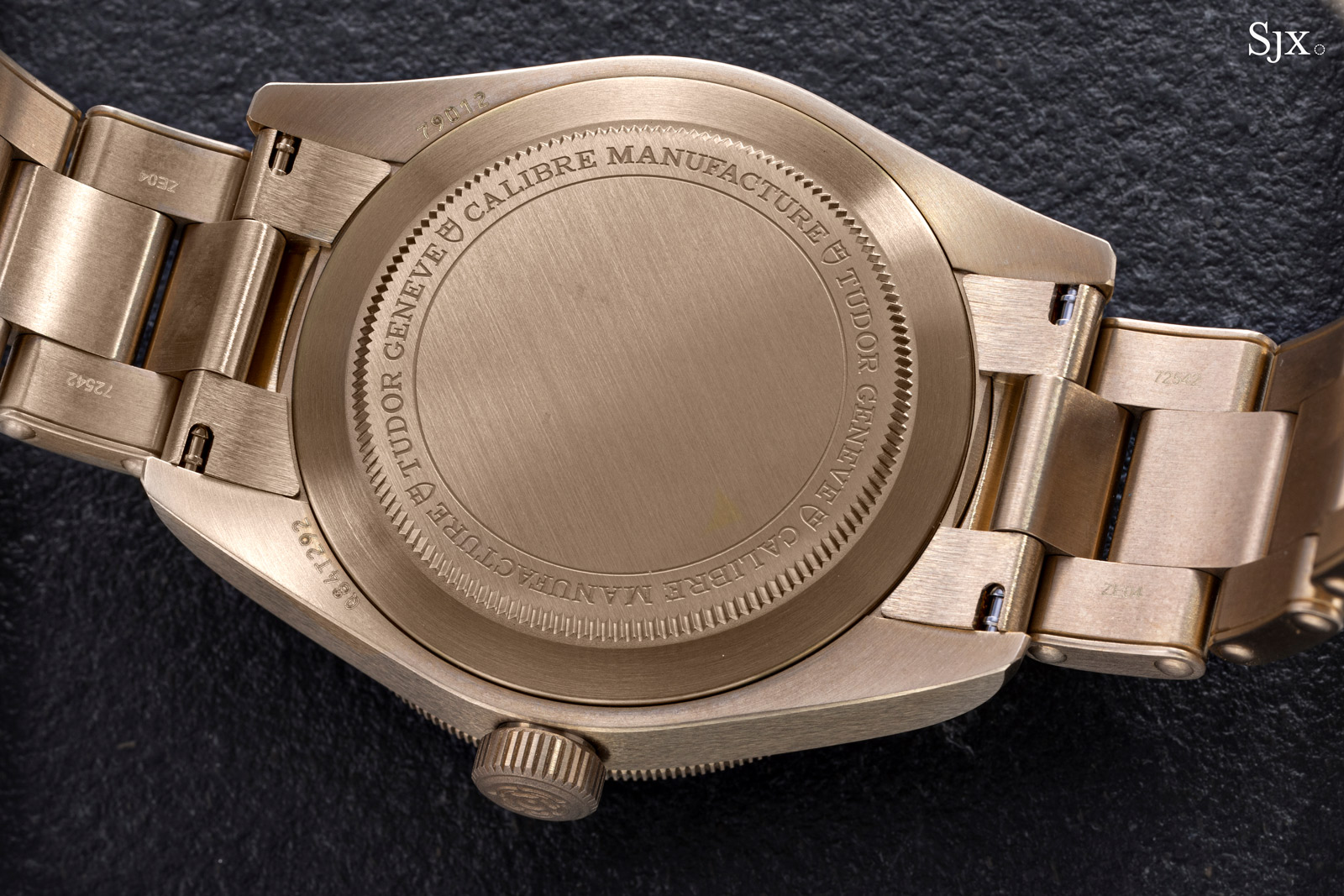 Consistent with Tudor’s other bronze watches is the “3-6-9” dial. This configuration is often associated with the Rolex Explorer – it is sometimes known as an “Explorer” dial – but is new to the BB58 family.

The rounded font for the numerals bring to mind the dials of vintage Rolex watches. In comparison to the bold typeface found on modern Explorers, the font on the BB58 Bronze gives it a vintage feel matched by the warm hue of the bronze case. The BB58 Bronze also differentiates itself from Tudor’s previous bronze watches with its dial in a striking, graduated brown. It is several shades darker than the original Black Bay Bronze that had a brown dial (which has since been replaced by a grey dial).

The darker colour complements the bronze case as it ages; the brown patina developed by the case will echo the dial colour. And the dial also has a gentle fume finish that adds a depth to its appearance. 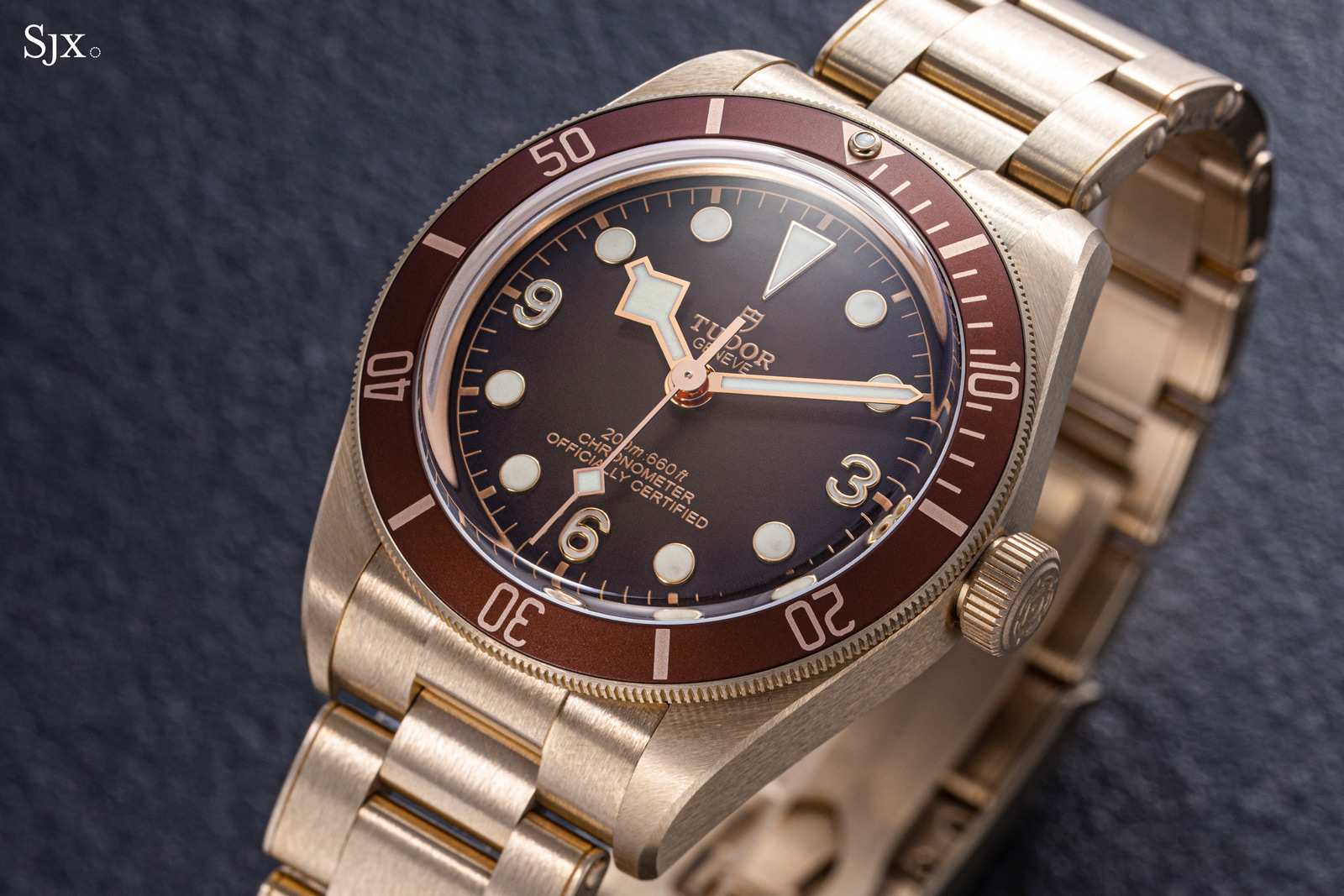 Like the hands and markers, the flange is plated in gold, completing the gilt print on the dial 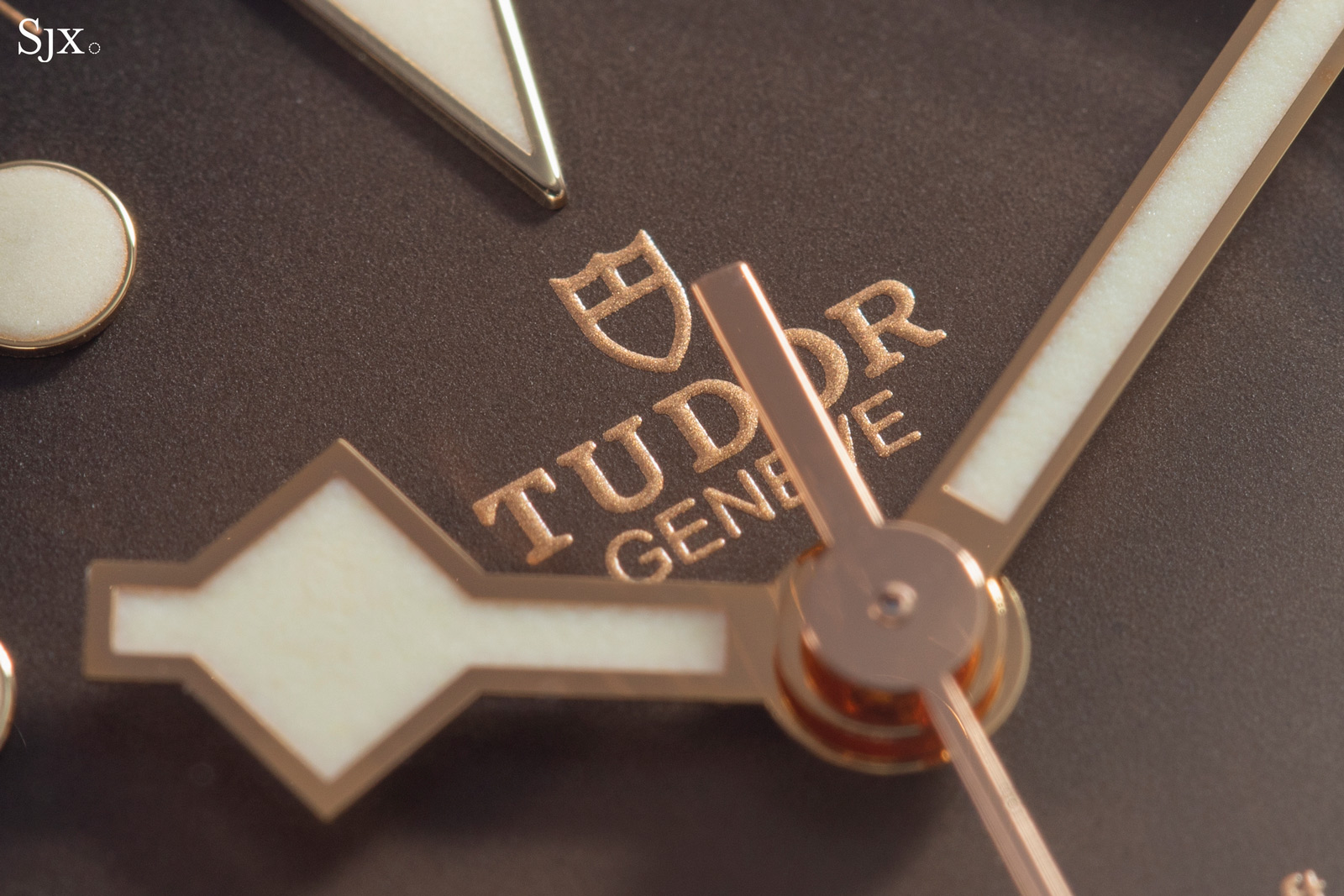 With several new features being introduced in the BB58 Bronze, it is certainly an exciting debut that hints at what might is to come in the distant future for the brand’s other models.

Minor upgrades like a new clasp tend to be glossed over if the execution of the watch is not up to par. Thankfully, the BB58 Bronze does not disappoint with its excellent finish and appealing proportions, as well as the attention paid to seemingly minor details that accentuate the allure of the watch. Availability: Only at Tudor boutiques
Price: US$4,625; or 6,390 Singapore dollars