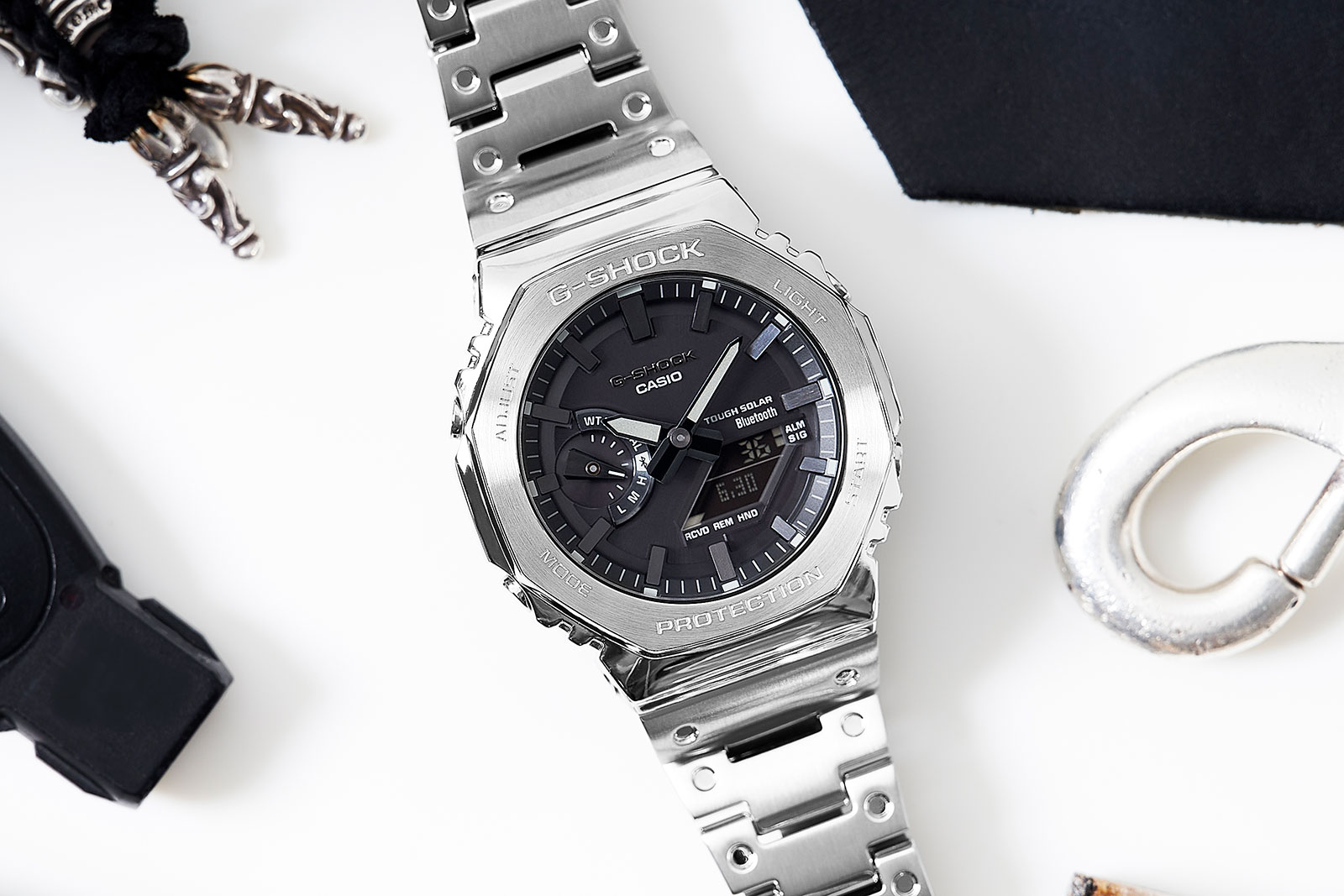 One of G-Shock’s biggest hits in recent years, the octagonal 2100 series appears to be a new design (or one derived from a famous watch reated by Gerald Genta), but is in fact an adaptation of the first G-Shock from 1983, the DW-5000C. Both the 2100 and DW-5000C share an eight-sided bezel, but the bezel of the 1983 watch was an irregular octagon while the 2100 is a regular octagon.

Debuted in all-resin and followed by a version in a mix of metal and resin, the 2100 series was never available in metal from end to end until now. The Japanese watchmaker has just taken the covers off an all-steel iteration, the Full-Metal GM-B2100, available in black coating, rose gold plating, and steel. 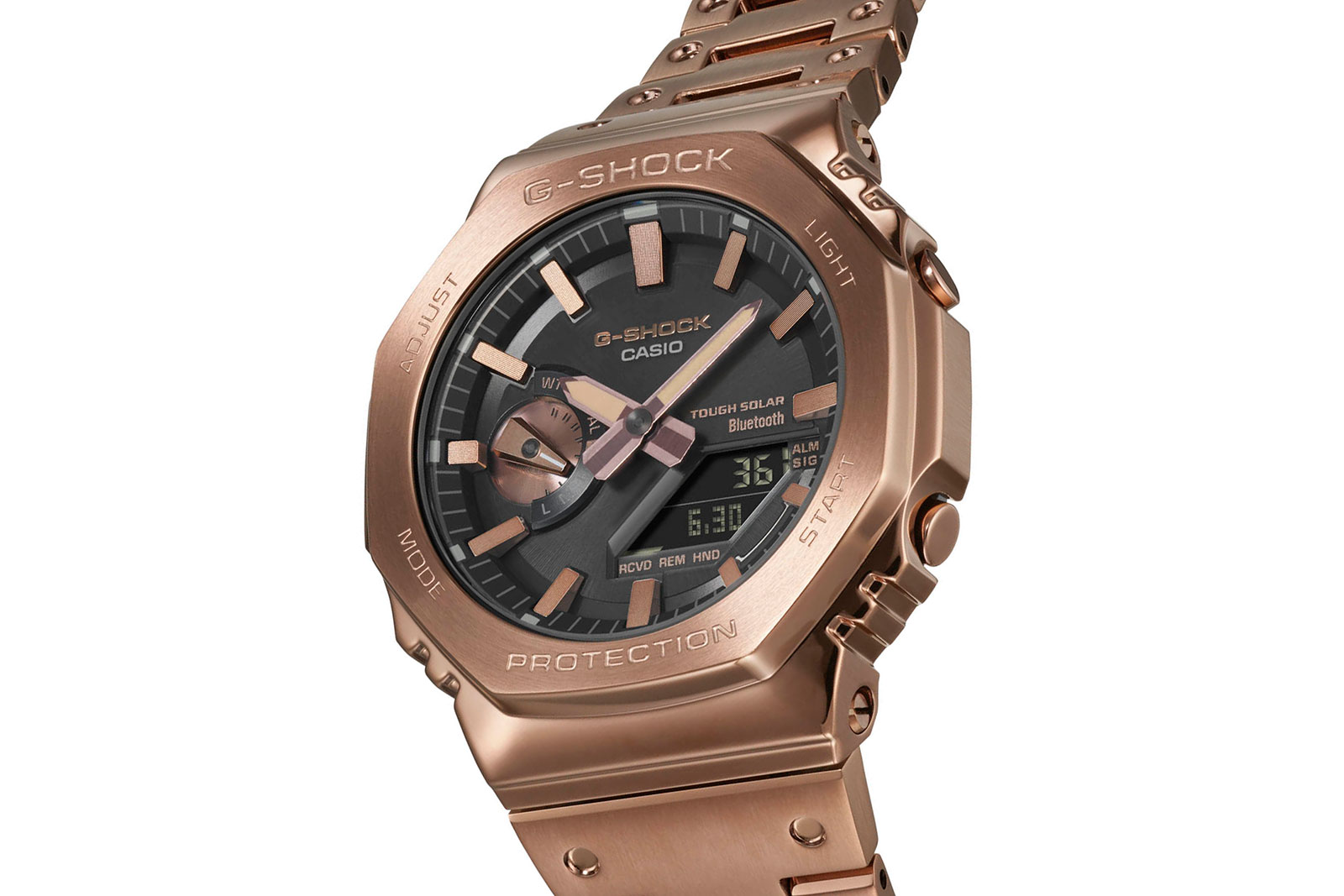 The original 2100 in colorful resin is a appealing, affordable watch, explaining its popularity. Perhaps part of the appeal is its similarity to the Royal Oak, but there are other reasons that distinguish it from the countless G-Shocks variations, one being its compact dimensions and resulting comfort on the wrist. Now it gets even better with a metal bracelet.

Due to the aggressive fluting on the case sides along with the dimples on the bracelet links, the watch has an industrial or military feel, which is perfectly suited to the robust nature of a G-Shock. 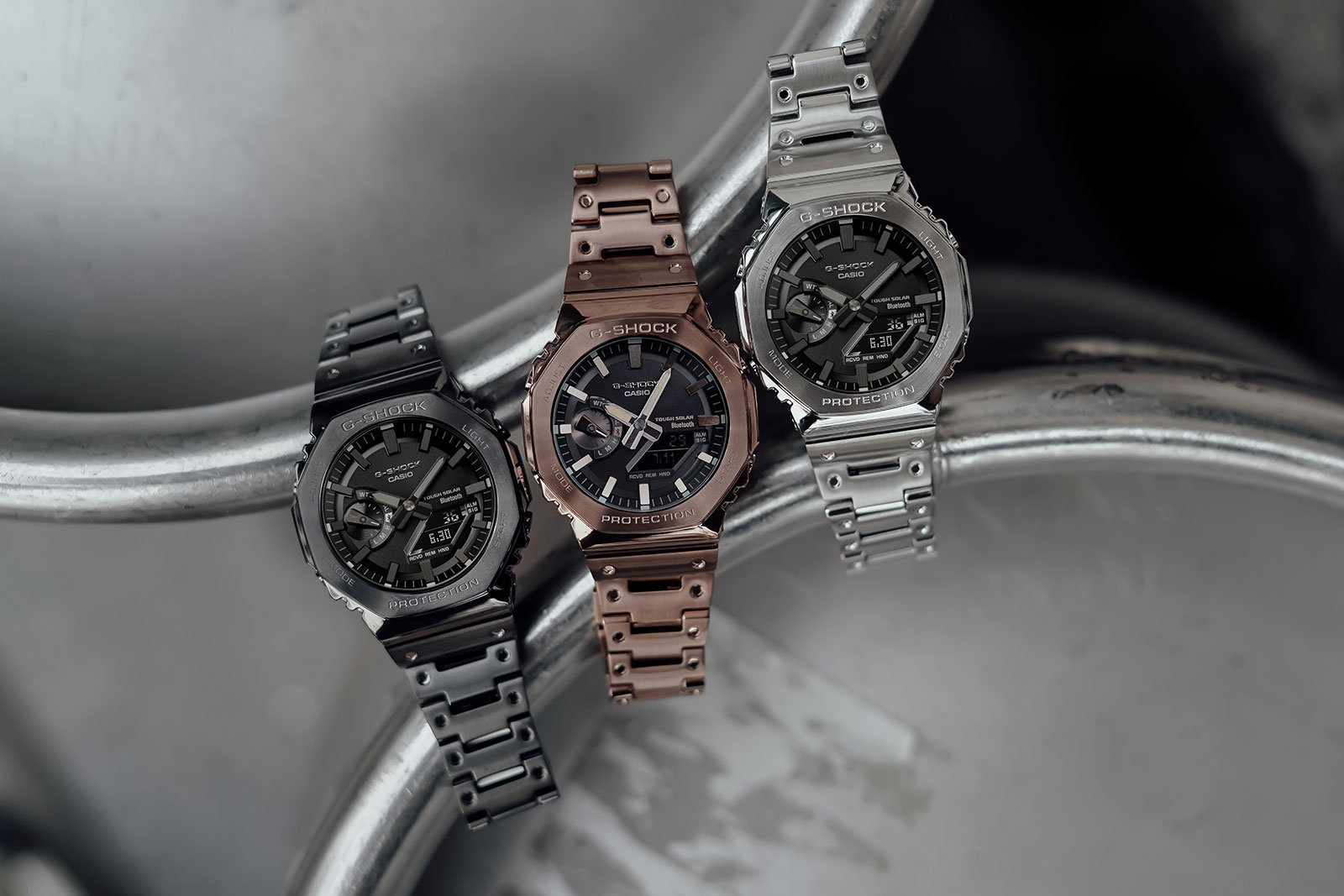 Ironically, my favorite of the trio is the rose gold-plated version. Besides being an uncommon finish for watches in this price range, there’s a sense of humour in its passing resemblance to a rose gold Royal Oak.

The Full-Metal GM-B2100 starts at US$550, and costs another US$50 to in either black coating or rose gold plating. Even though that’s five times as much as the resin model, it is a much more striking design and is priced similarly to the all-metal G-Shock models. 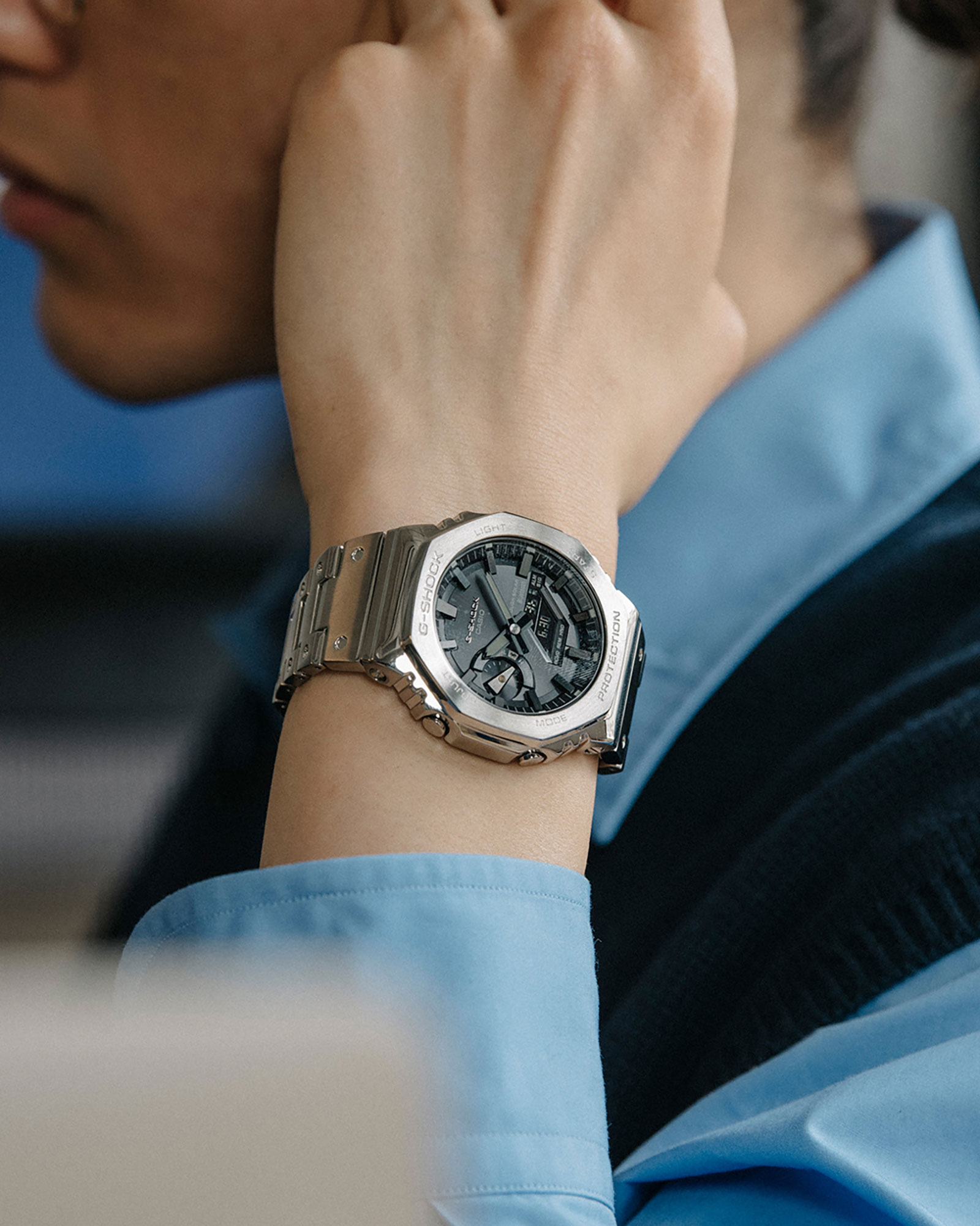 Like all other G-Shocks, the GM-B2100 is built to withstand shock thanks to the resin bumpers between the electronic module and case, which dampen impact and “disperse shock to the connective part of the band”. Along with a 200 m water resistance, it is one of the most durable sports watches with an integrated bracelet, albeit one that’s not mechanical. 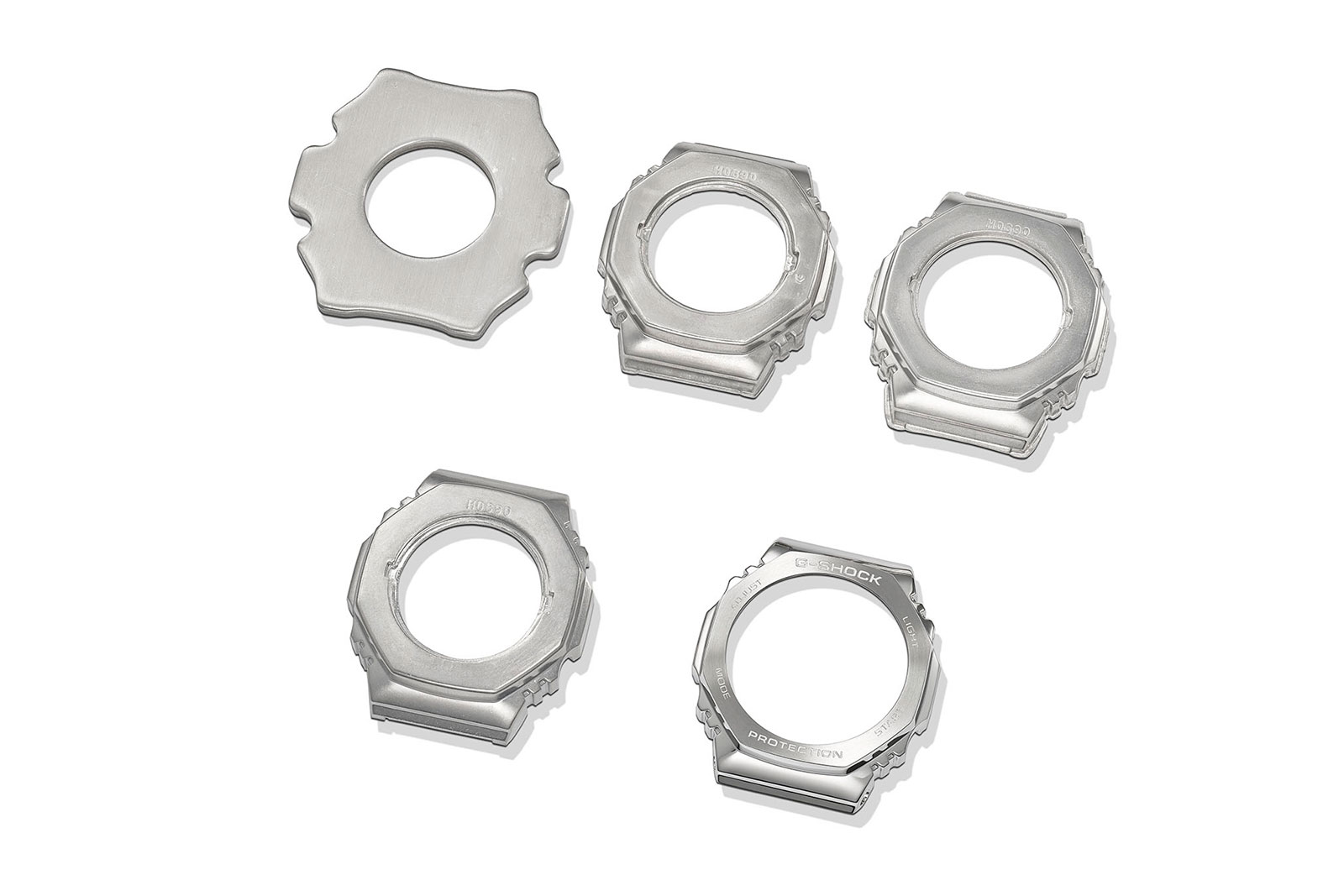 Contrary to a typical G-Shock, the GM-B2100 sports an analog display, with chunky, three-dimensional hour markers and hands that add depth to the dial. 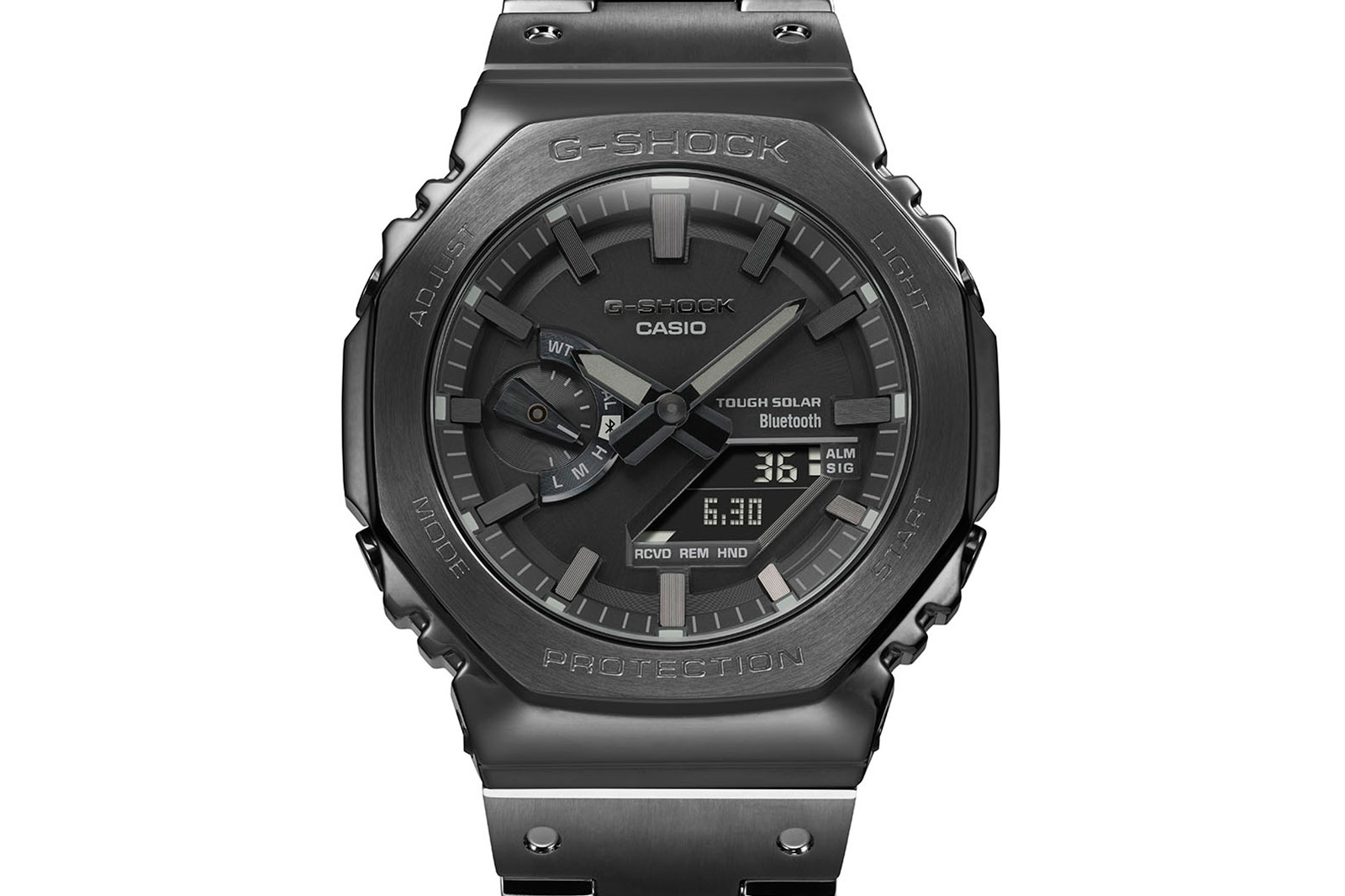 The movement within is pretty much full-spec G-Shock. It’s solar-powered and Bluetooth enabled for smartphone pairing, both of which were unavailable on the original GA-2100 of 2019. That said, the watch is still low tech in terms of nighttime legibility, it relies on a single LED bulb at five o’clock for backlight. 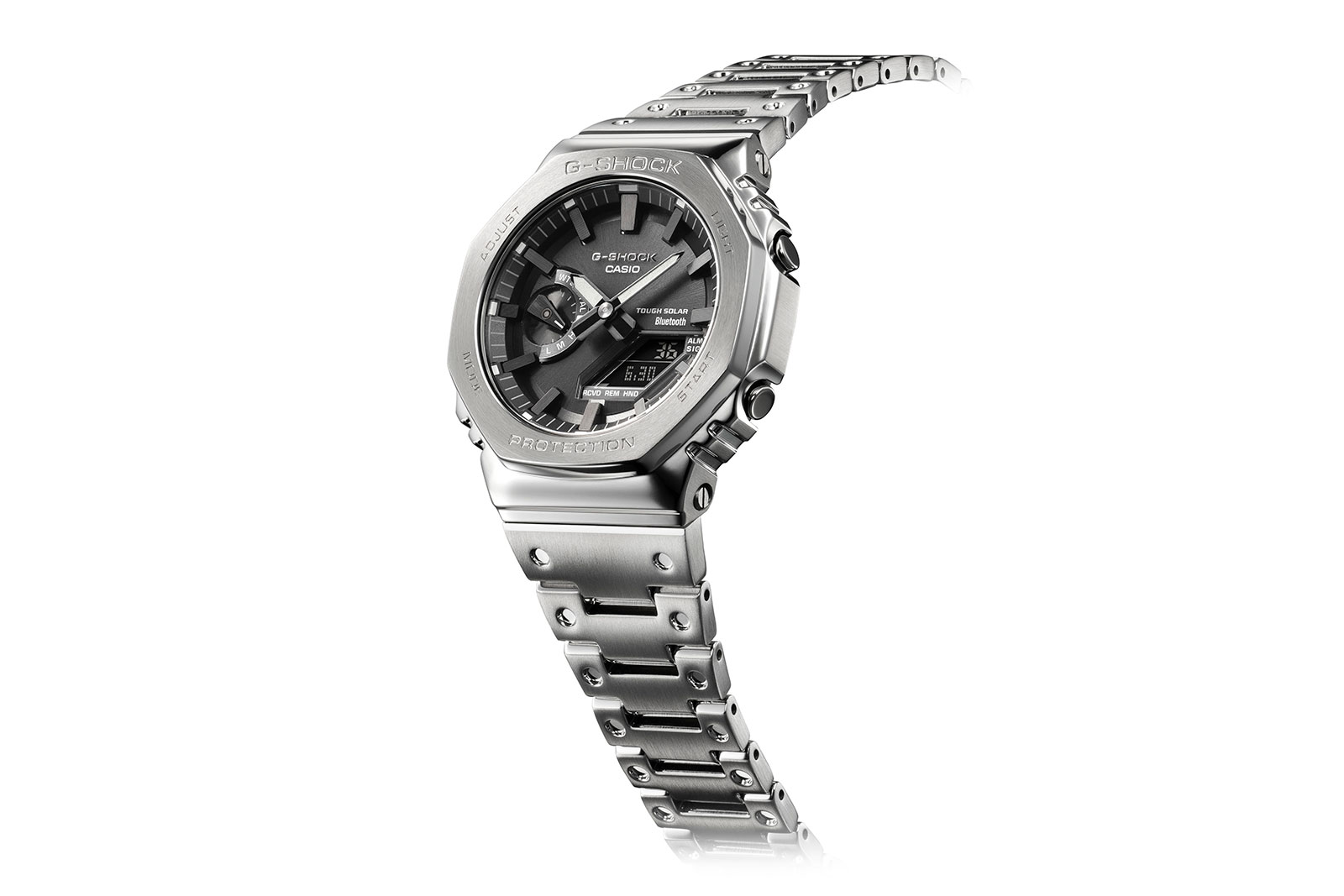 Limited edition: No
Availability: At G-Shock stores and retailers
Price:
Steel – US$550
Steel with ion plating – US$600

In gold, black, or steel.