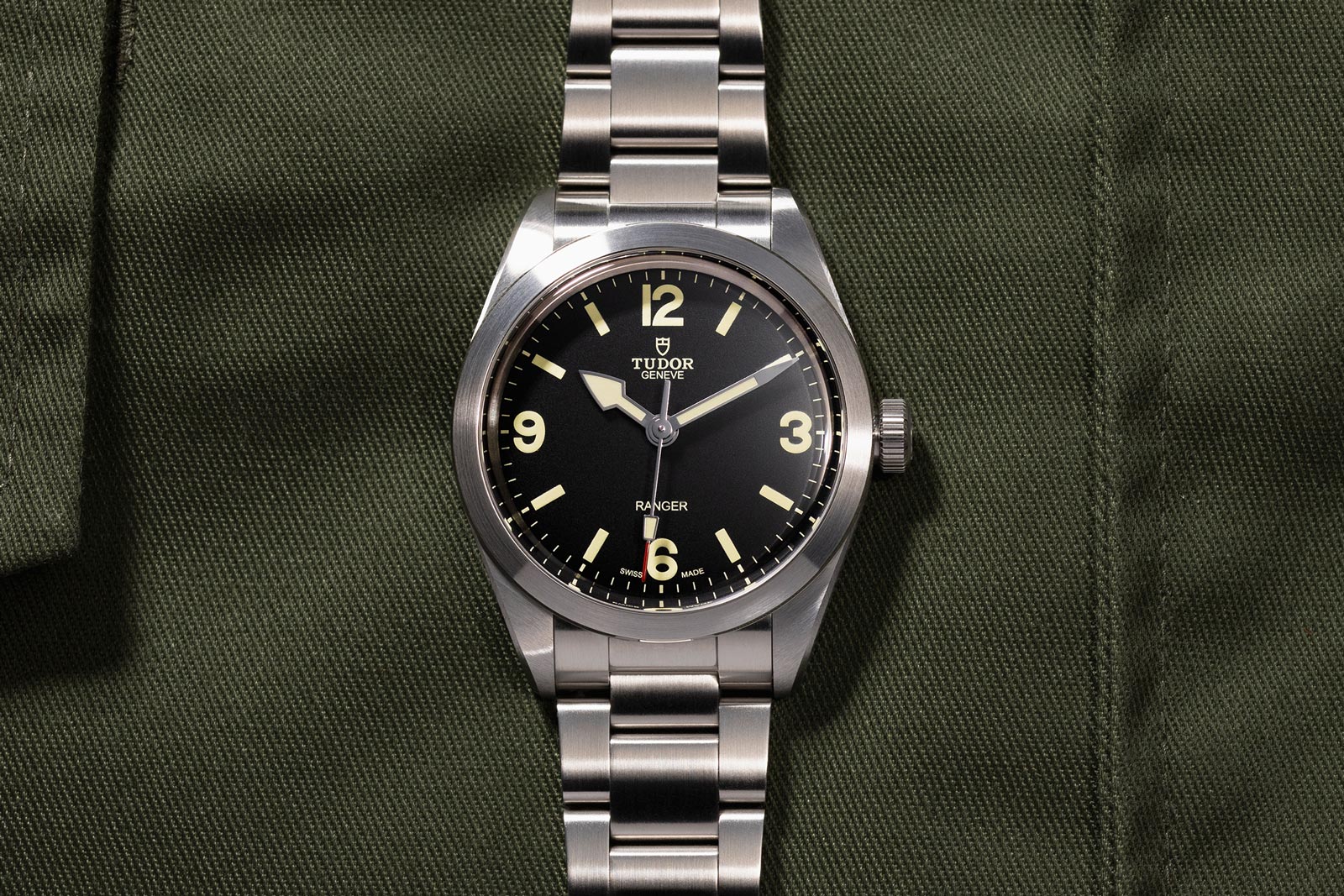 Conceived as a watch for explorers, the Ranger arrived in its current form with an Arabic-numeral dial in the 1960s, although the name dates to 1929. Although the model was revived in 2014, it never really caught on.

Now that looks set to change with the brand-new Ranger that’s a subtly but substantial upgrade over its predecessor. Now housed in a better-proportioned case that now contains an in-house movement, the new Ranger becomes Tudor’s most affordable watch with a proprietary movement, thanks to its retail price that starts well under US$3,000. 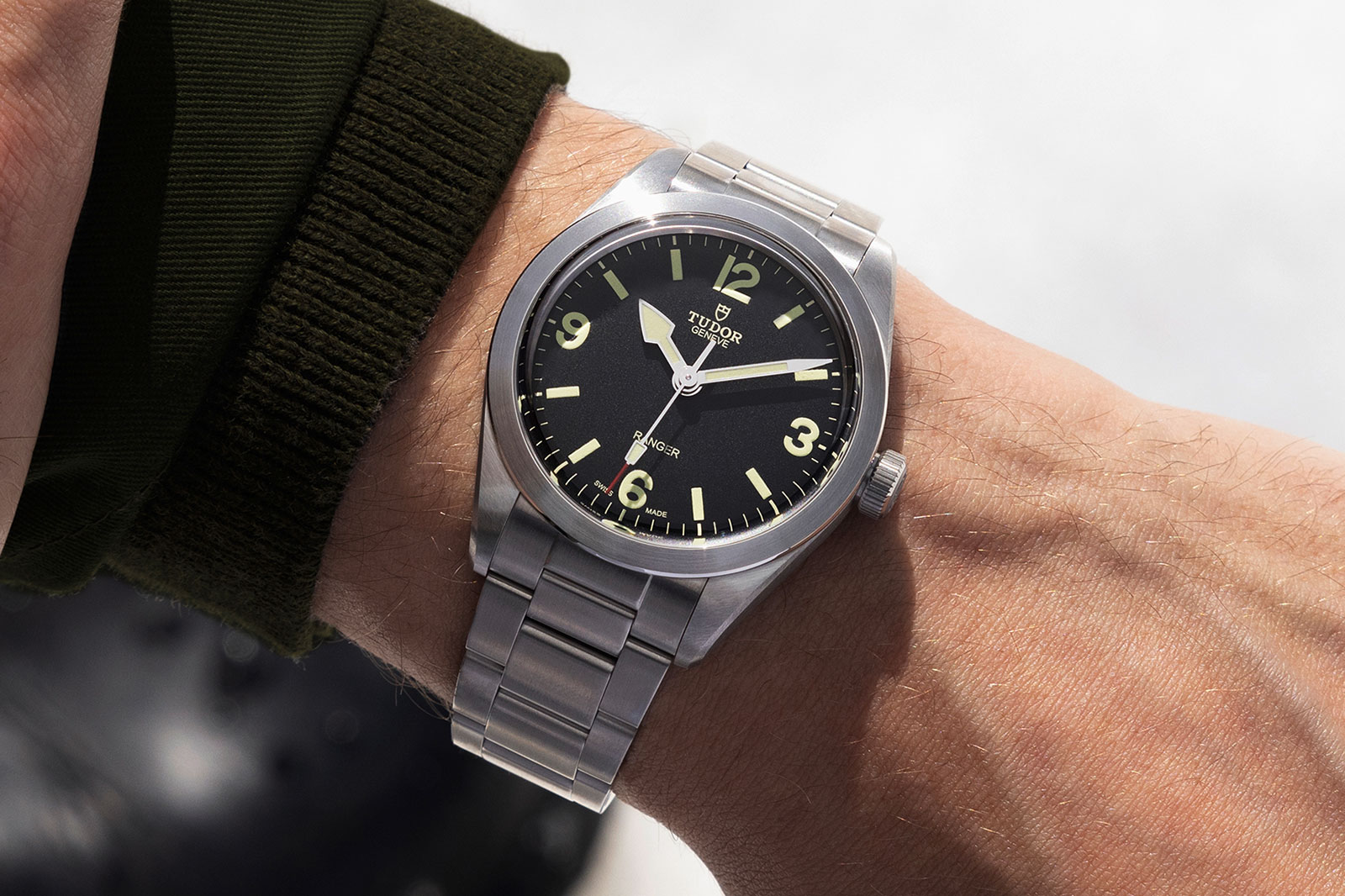 For watchmaker that excels in affordable, reliable watches, the Ranger makes a lot of sense as it condenses Tudor’s key strengths in a compact, affordable package.

The latest version of the model is equipped with the brand’s state-of-the-art features, including an in-house movement and the “T-fit” micro-adjustment clasp, but is priced at just US$2,725 on strap. In fact, the Ranger almost seems like Tudor intentionally making a point that it delivers arguably the best quality-to-price ratio in Swiss watchmaking. It is difficult, maybe impossible, to find another watch with the same tangible qualities for the same price. 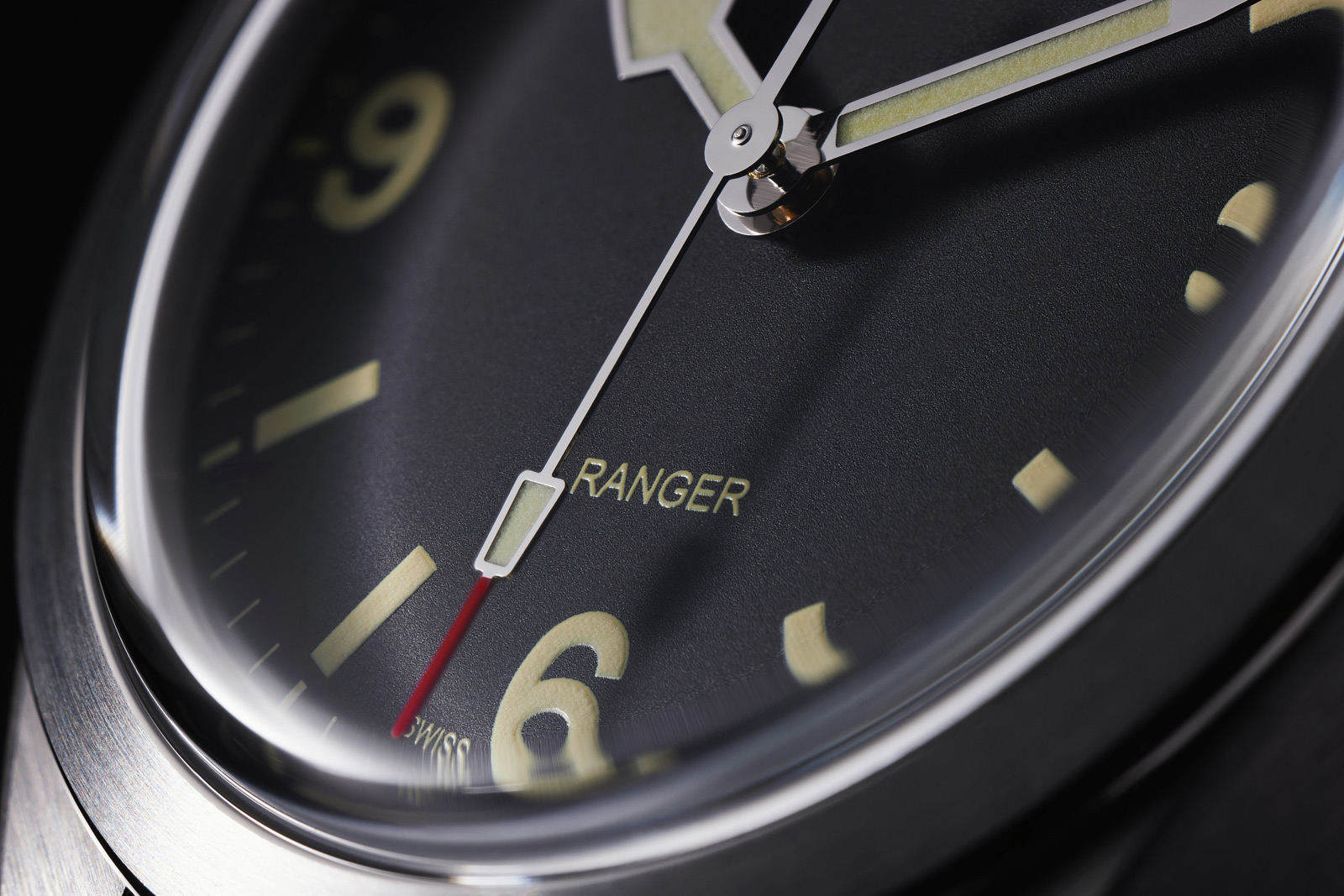 Aside from its technical features, the new Ranger is an intrinsically appealing watch, largely because it has better proportions and details than earlier version. Now 39 mm wide instead of 41 mm, the case is more appropriately given the design and historical inspiration. The diameter is matched with a thickness of 12 mm – slim for a Tudor, especially one with an in-house movement. More importantly, it doesn’t just measure slim, it feels compact on the wrist.

The Ranger checks all the boxes in terms of tangible and quantifiable features, so all that’s left is the appeal of the design. Admittedly the watch looks flat in images, which is certainly not the case in real life. In the metal the watch has a clean, almost stark look that is best described as functional with a hint of retro. Mostly it comes across as a low-key, easy-to-wear everyday watch, which I appreciate very much. 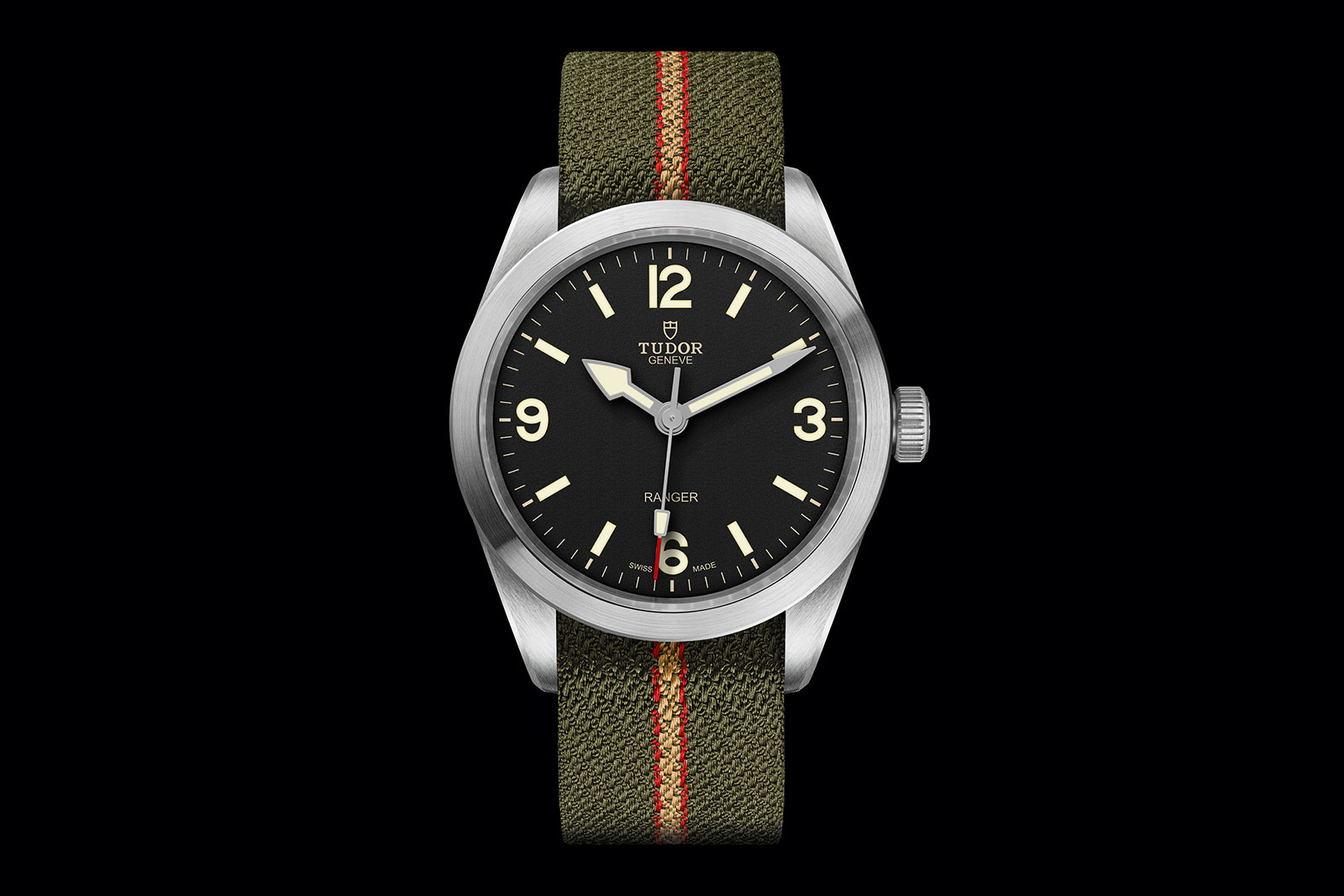 The fabric strap gives the watch a strong vintage vibe

The new Ranger was launched to commentate the the 70th anniversary of the British North Greenland Expedition (BNGE), a scientific mission that lasted two years from 1952 to 1954. Mostly drawn from the British army and navy, the expedition members were each equipped with a Tudor Oyster Prince, the model that later evolved into the Ranger. The Prince worked so well during the expedition that one of its members later wrote a letter to Rolex praising the “remarkable accuracy” of his timepiece during his time in the frigid environment, when temperatures reached as low as -66.1 °C.

But this anniversary launch is actually a reboot of the 2014 launch of the first contemporary Ranger. As a result, the latest version is actually a facelift, or more accurately an especially thorough makeover and upgrade. The biggest improvements happens within the case, where the ETA movement has been replaced by the brand’s own MT5402, which offers a superior 70-hour power reserve along with a host of other technical advances. 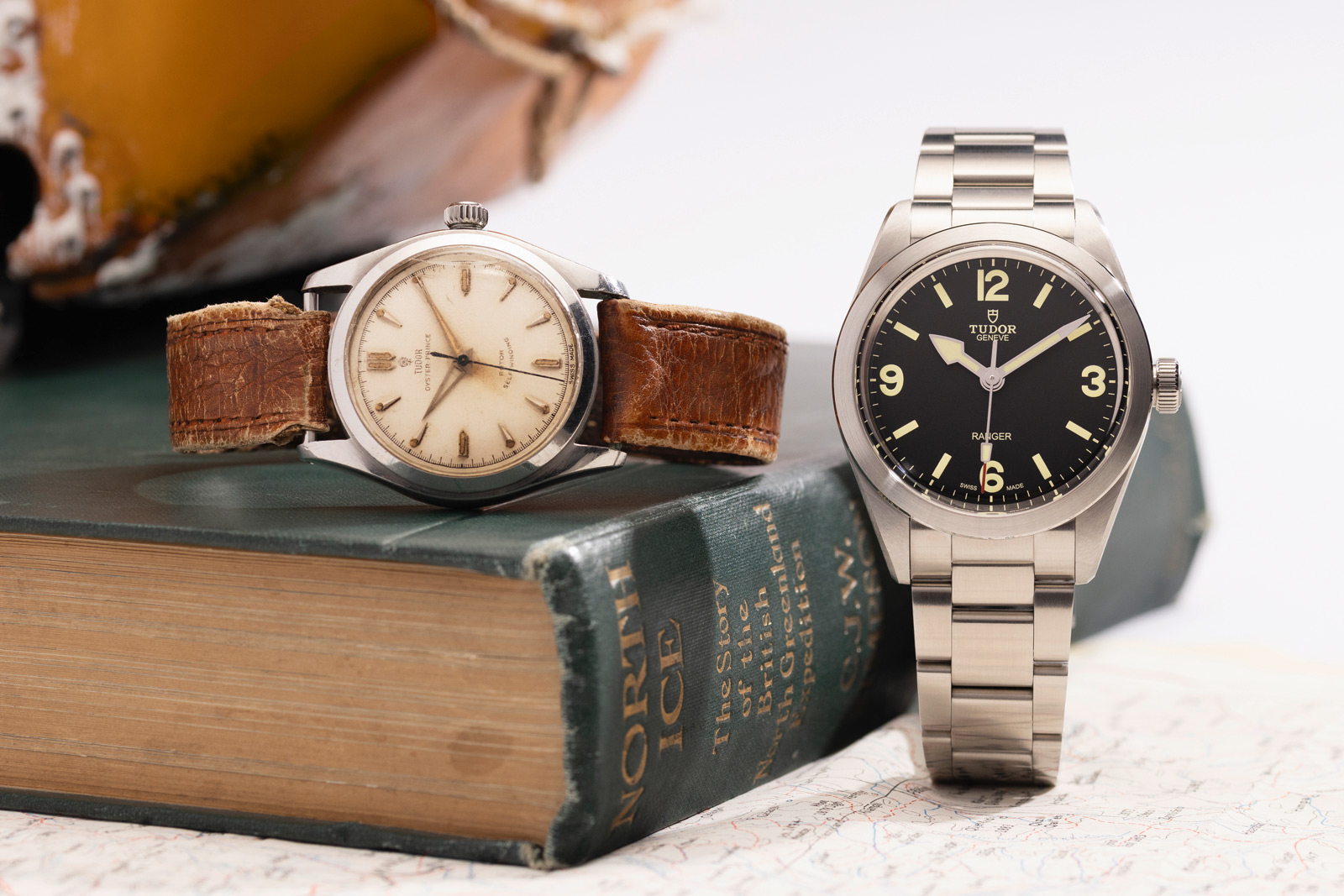 One of the Oyster Prince watches that went on the expedition and now part of Tudor’s museum (left), and the Ranger 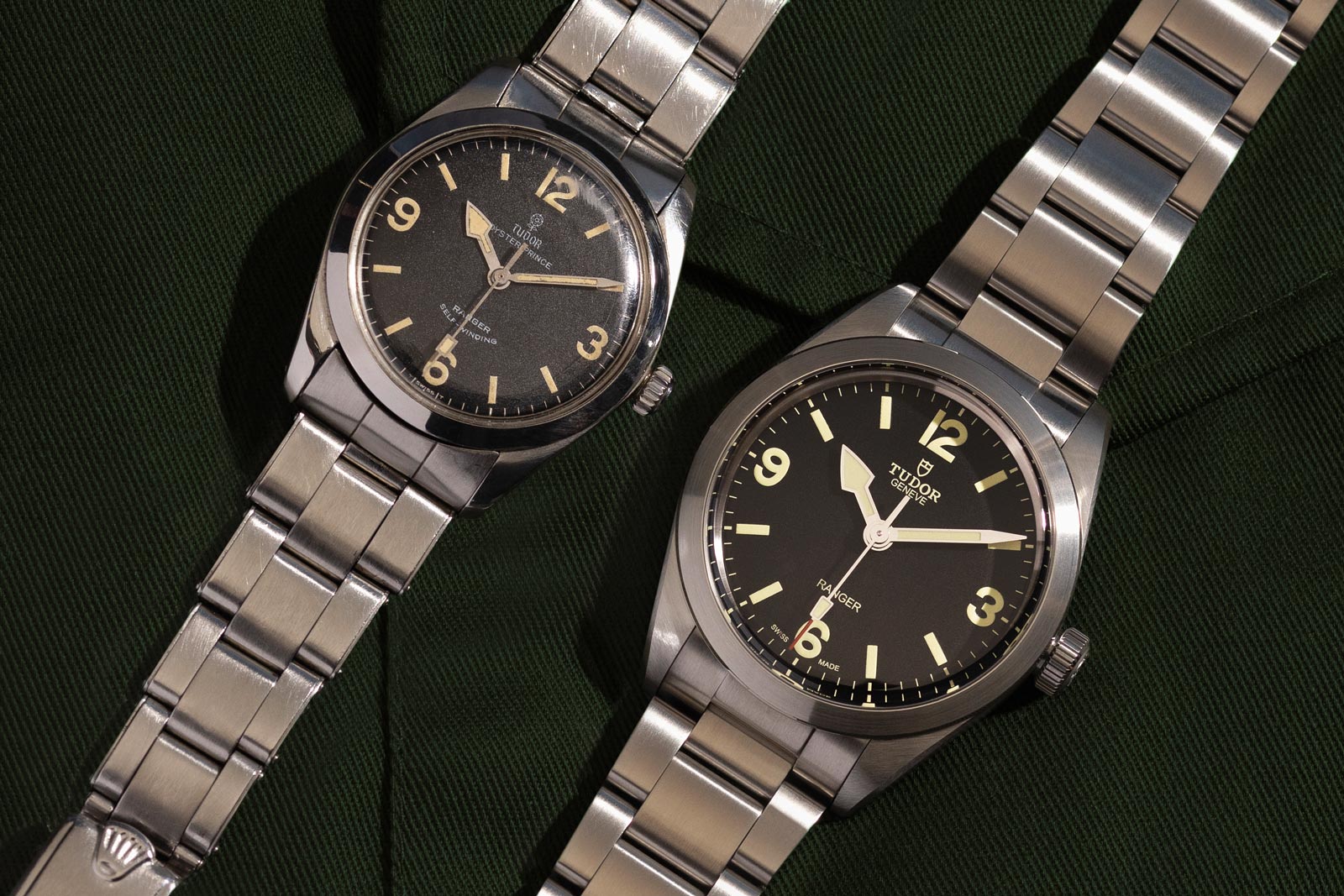 The vintage Ranger (left) and its modern namesake

It’s worth remembering that the MT5402 is a smaller movement first used in the compact Black Bay Fifty-Eight. As a result, Tudor to could shave 2 mm off the case height of the new Ranger, resulting in a watch that looks and feels better.

For a watch with an obvious vintage flavours, proper size and proportions matter. So the 12 mm height and 39 mm diameter of the new Ranger hits the sweet spot for such a watch; it’s neither too big nor too small, but just right.

On the subject of wearability, the bracelet offers a better fit with its micro-adjustment clasp that debuted last year in the Black Bay Fifty-Eight Bronze. It allows for an easy, on-the-fly adjustment of up to 8 mm either way, which is useful when the wrist swells or contracts with changing ambient temperature. 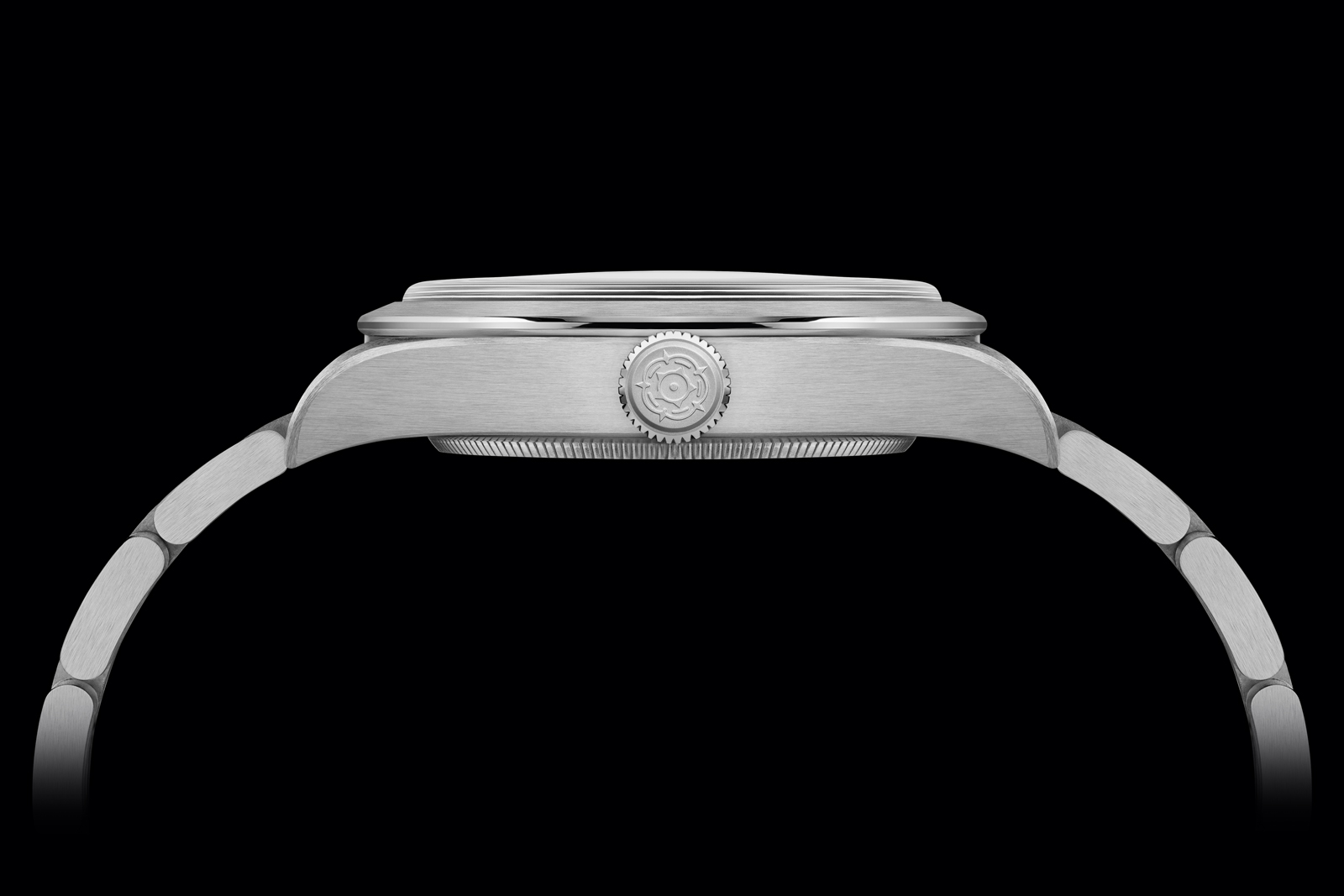 The case middle is satisfyingly thin, giving the Ranger proportions that reminiscent of vintage watches, albeit on a larger scale

In terms of design, the new Ranger sports a pared-back design with several thoughtful tweaks. One is the reshaped seconds hand, which has a red tip instead of being red along its entire length. This change tones down the overall aesthetic and removes a fairly distracting element. 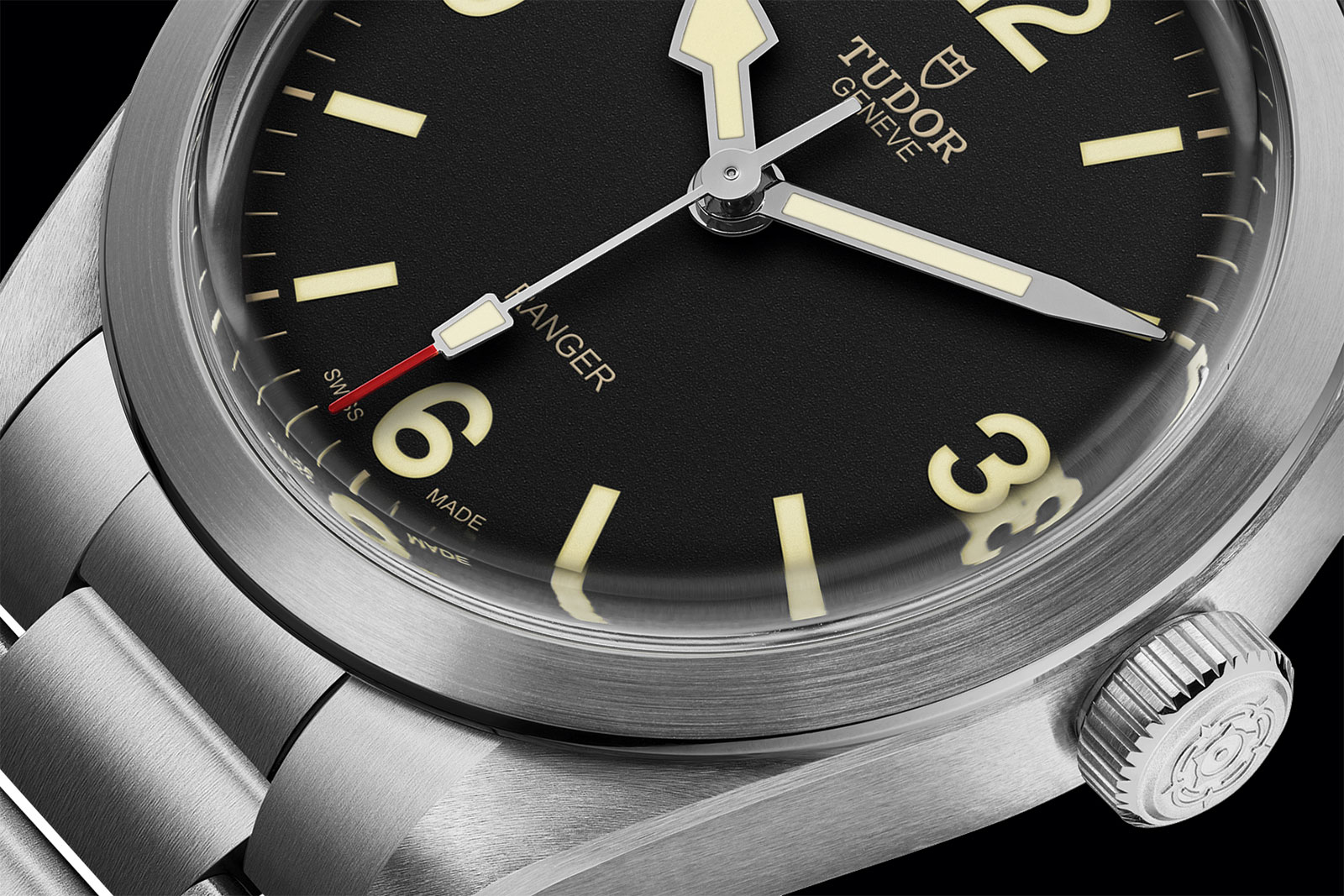 The simplified design continues with the bracelet, which does away with faux rivets and straight end-links, giving it a streamlined look 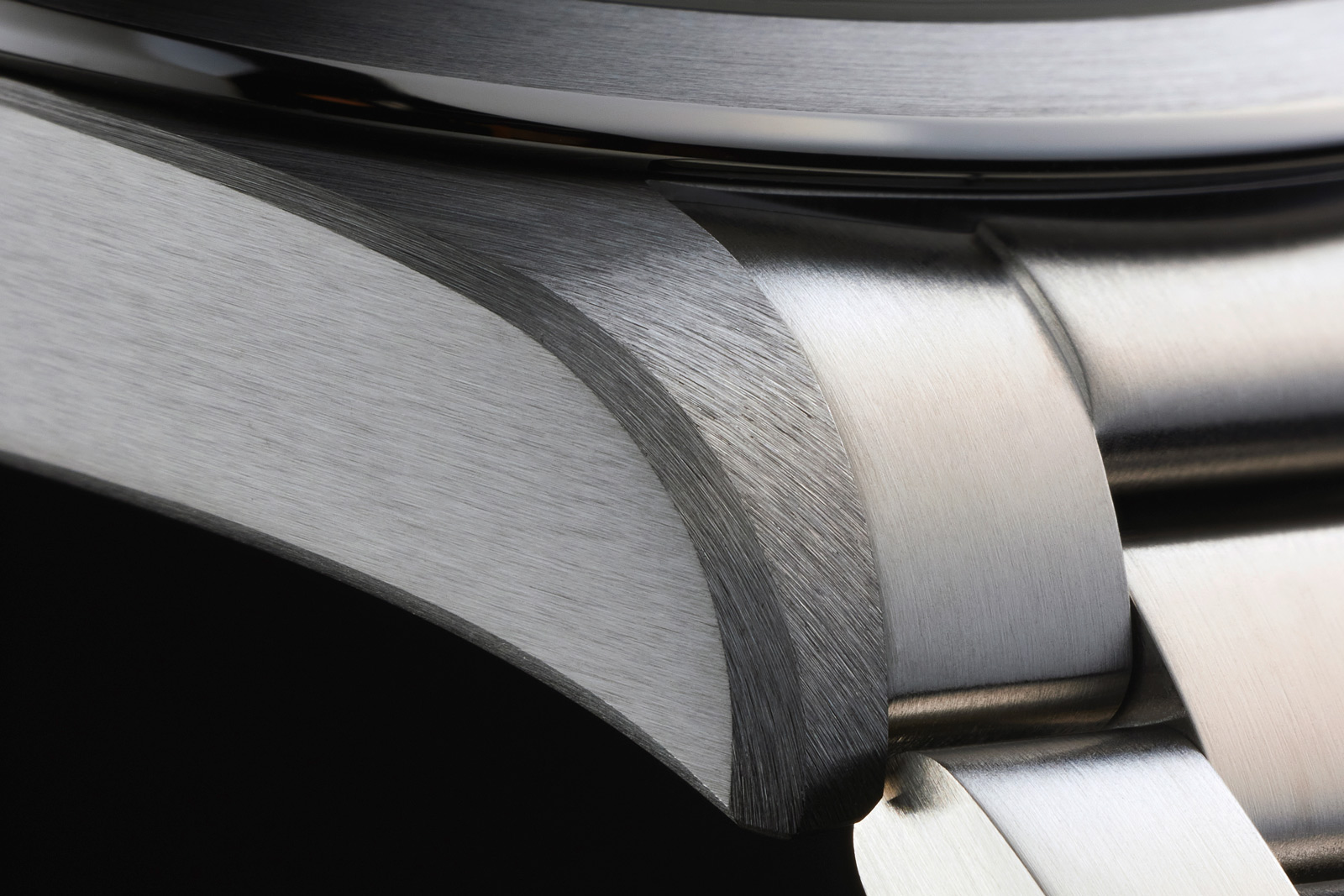 The case was also reshaped by giving it a more aggressive profile with more pronounced lugs, which now gain a wide bevel that tapers towards the crown. Perhaps more importantly, the case is now entirely matte with a brushed finish on all surfaces. Though simple at a glance, the brushed finish is nicely done with a mix of different grains and directions, with a little bit of refinement provided by the mirror polished rim of the bezel.

And lastly, as is now the norm for Tudor, the Ranger is offered with strap options beyond the bracelet. One is a rubber strap covered in fabric, and the other is a dark olive, NATO-style fabric strap with a gold-and-tan stripe. 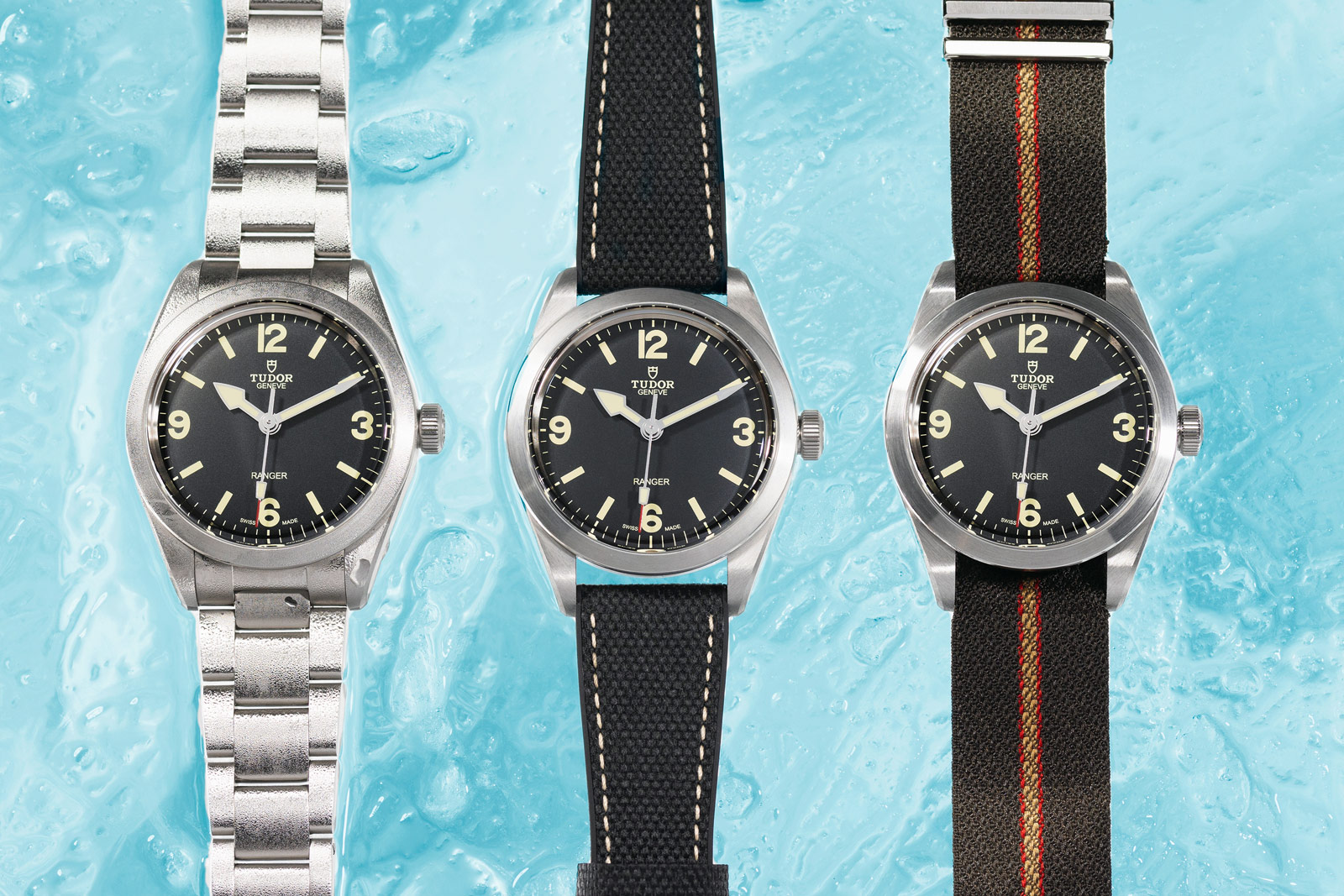