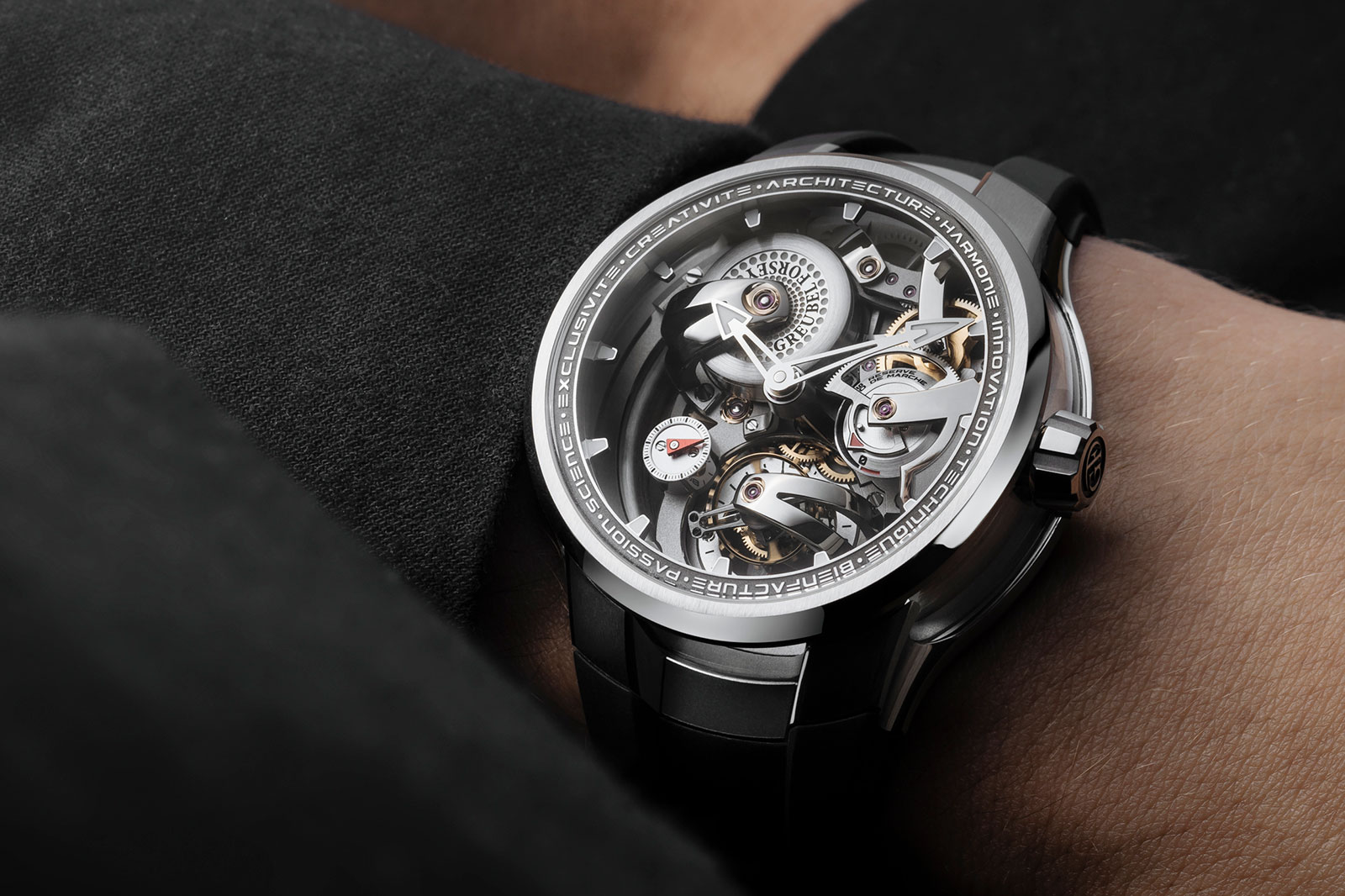 Greubel Forsey’s house style is often contemporary in design but traditional in decoration and construction, an approach best embodied by its watches with an open-worked movement for the dial. Now the brand has reimagined its usually classical movement aesthetic and combined it with a sleek and sharp case to create the Tourbillon 24 Secondes Architecture.

While the Architecture is fundamentally an iteration of the brand’s fastest-rotating and inclined tourbillon, it is powered by an all-new movement with swooping bridges and satisfyingly sharp lines. And the new calibre is contained within a sleek titanium case with an integrated strap, one no doubt inspired by its bestselling sports watches. 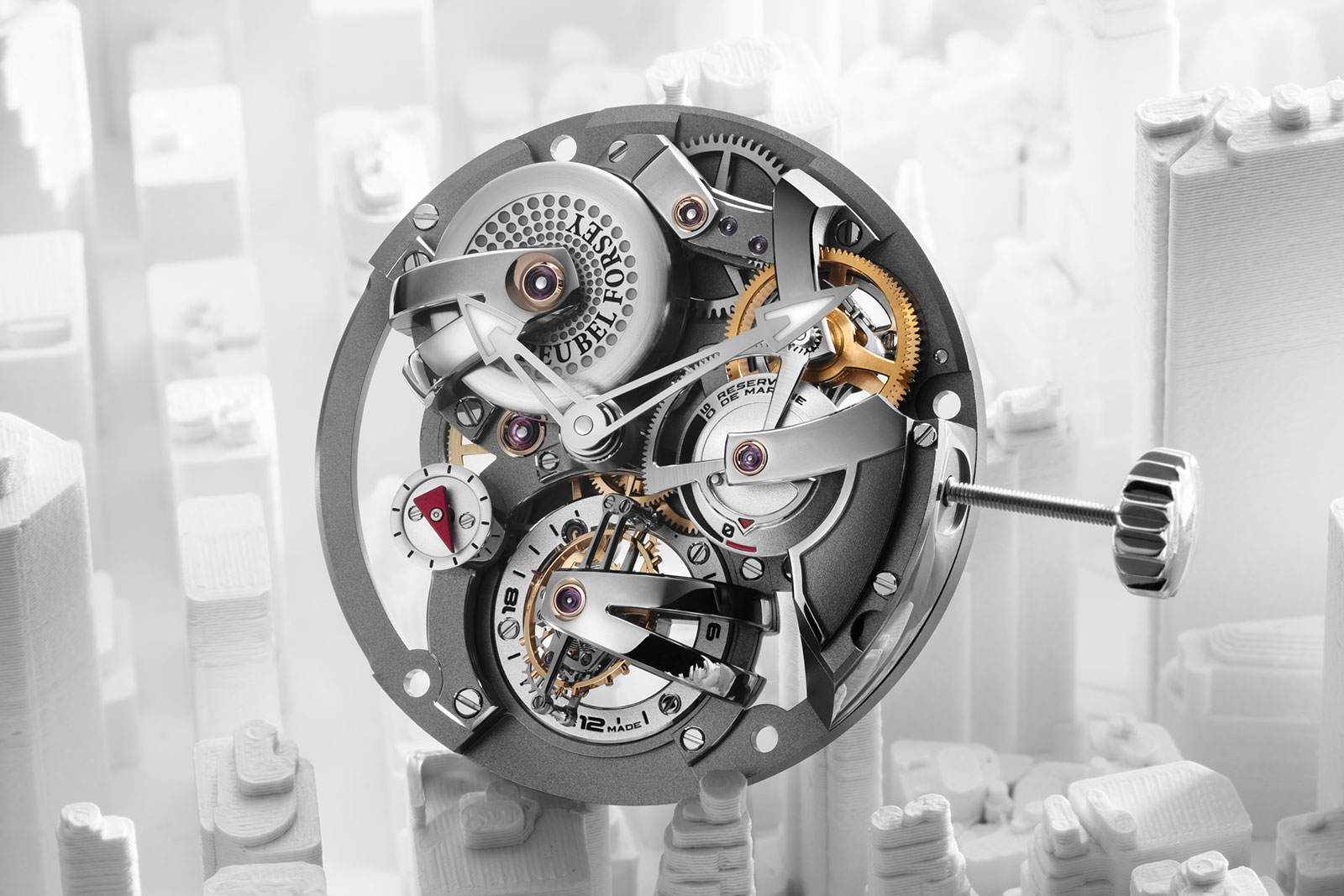 When I first saw images of the watch, my instinctive reaction was that it lived up to the name – it is impressive and architectural. I like the complex forms within the movement, which creates immense depth while also being slightly organic thanks to the curved, polished bridges. And the streamlined case is impressively detailed, especially on its flanks and edges.

In fact, the Architecture is a major step forward over its predecessors in terms of architecture, no pun intend, in how it creates a strikingly more modern aesthetic for the movement while preserving the signature Greubel Forsey elements like the enormous bridge for the canon pinion that holds the hands or the jewels in chatons. 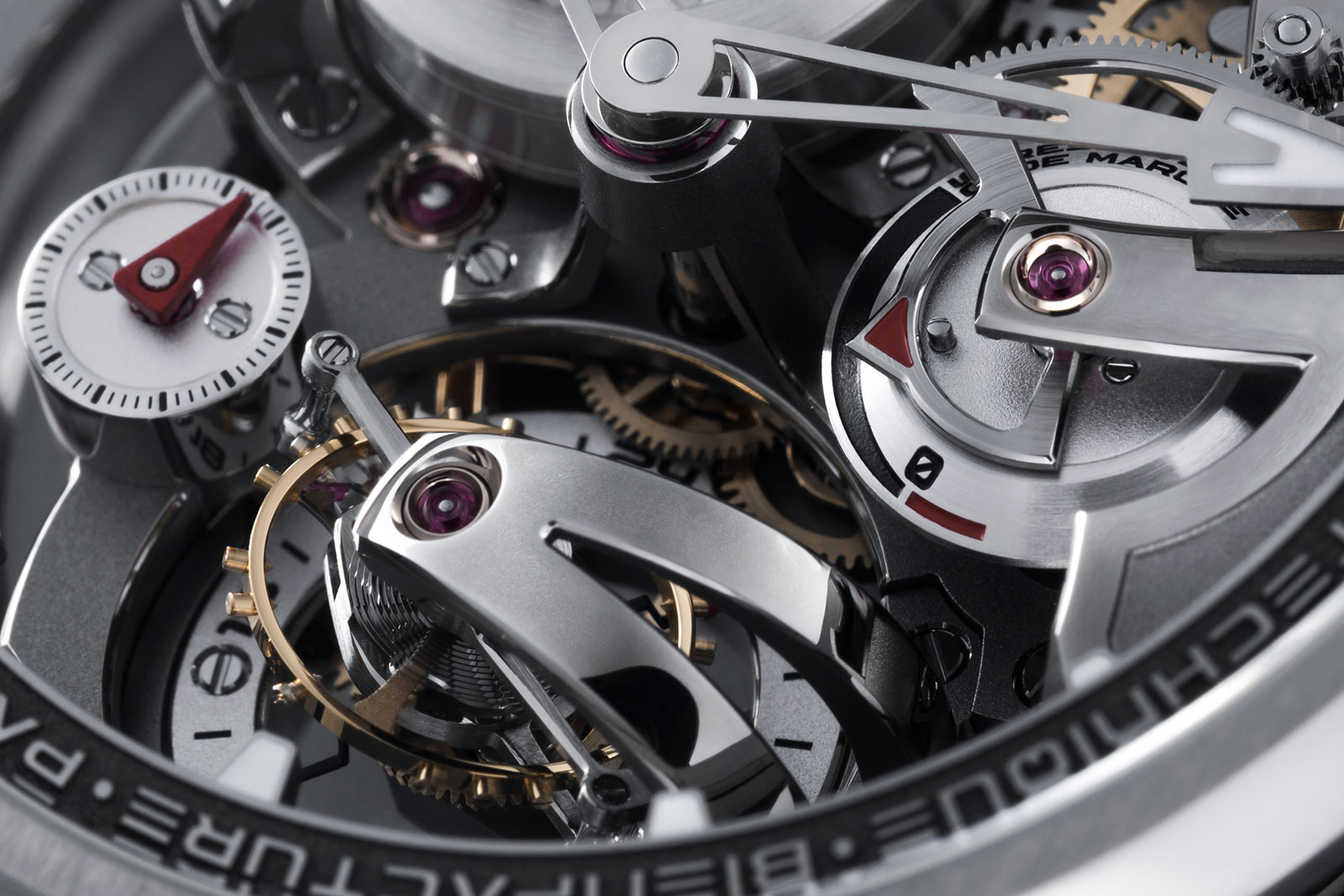 One ingredient of its successful architecture is the shrewd and generous use of geometry in the construction of both the case and movement, which now rely on more forms and planes than before.

The case, for instance, is not only curved on the underside for better fit, but the case sides also slope inwards and upwards, leaving the bezel narrower than the case back. This serves to diminish the perceived size of the case, a useful characteristic for a brand that is known for very large watches. 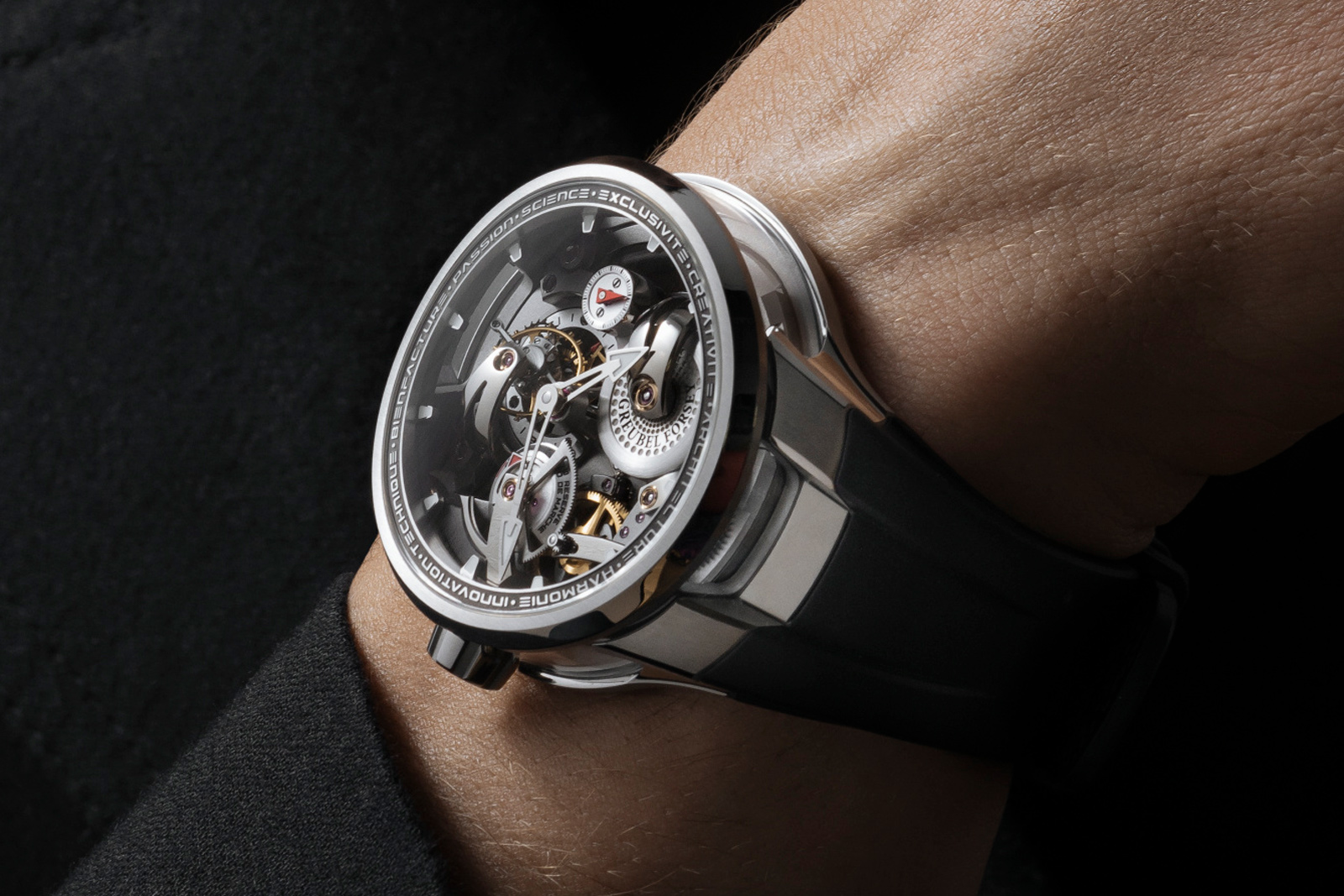 While the Architecture is perhaps the most modern Greubel Forsey to date, it still demonstrates the brand’s understanding of high-end classical watchmaking – but with a modern twist. The movement is replete with details such as mirror-polished bridges, but they are in titanium instead of traditional steel.

Managing to seamlessly combine historical and contemporary watchmaking, the Architecture sets itself apart from its peers that are usually either entirely classical, as with Voutilainen or Ferdinand Berthoud, or ultra-modern, as Richard Mille is.

Perhaps because of its unique proposition, the Architecture is priced at about US$500,000, which is a substantial sum of money but on par with comparable past models from Greubel Forsey. But compared to the brand’s earlier offerings, the Architecture is unique in both design and execution, making it a more compelling proposition. 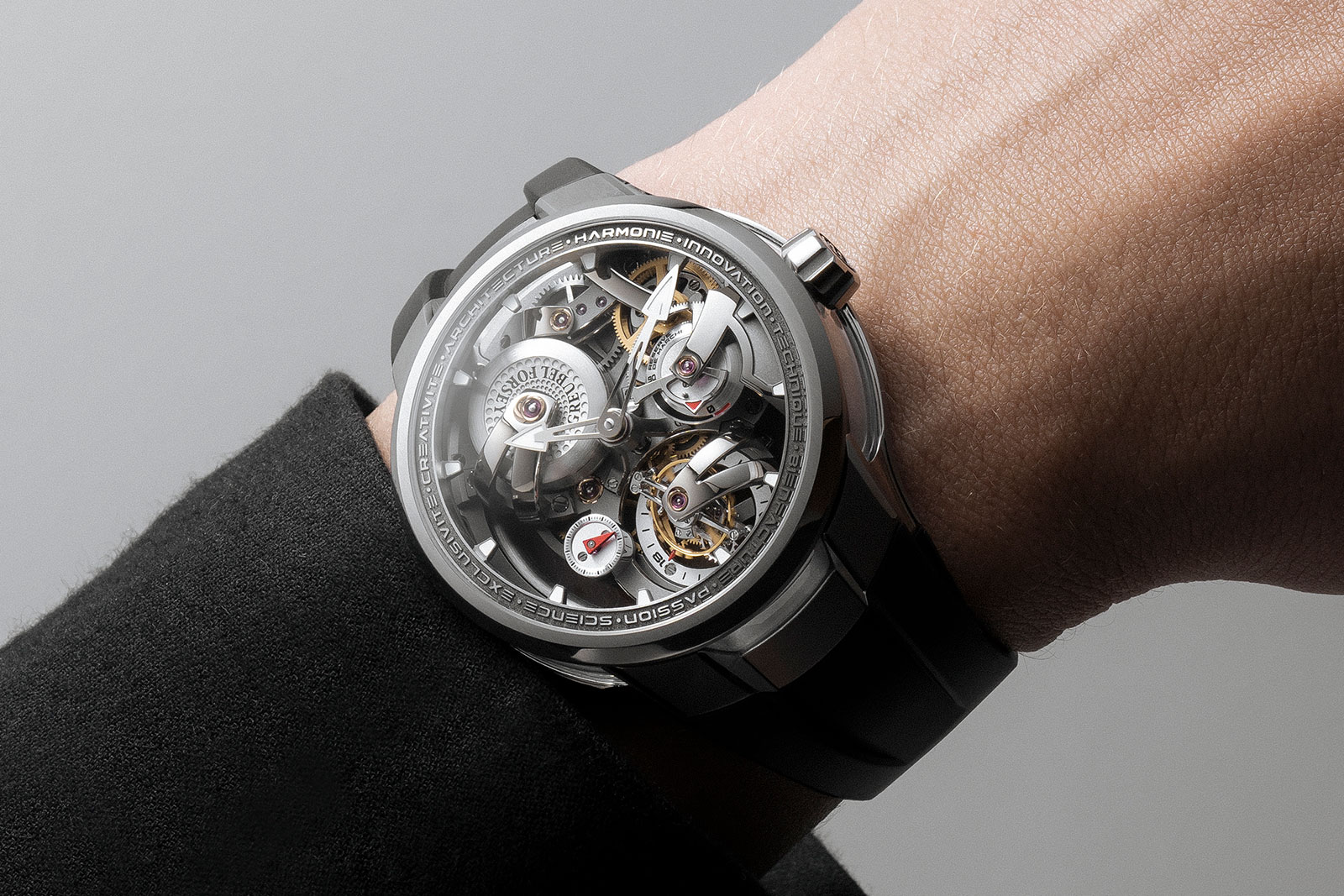 An object of time

The Architecture is an impressive object – its scale is almost a pocket watch in fact – but the execution is entirely 21st century in format and style.

One of its most modern element is the case, which is essentially a tall sapphire ring sandwiched by the bezel and back, both which are titanium. The sapphire ring means the wearer is afforded a near-panoramic view of the movement, which is certainly appropriate for a movement with such depth and detail. 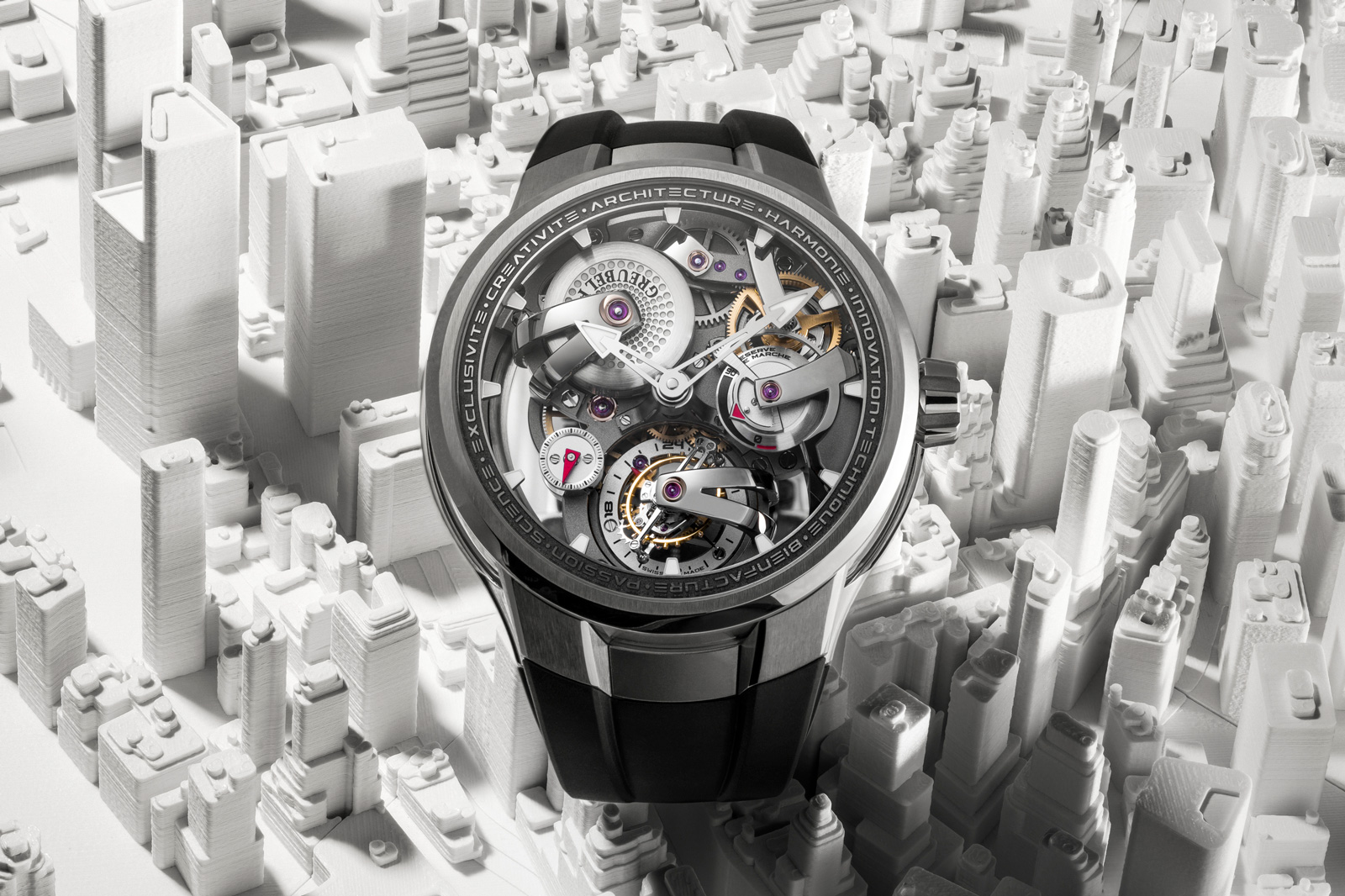 Notably, the sapphire ring takes the shape of a drum, with its flanks slightly sloping inwards towards the bezel. That leaves the bezel about 2 mm smaller than the case back, adding to the visual intricacy and technical complexity of the case. 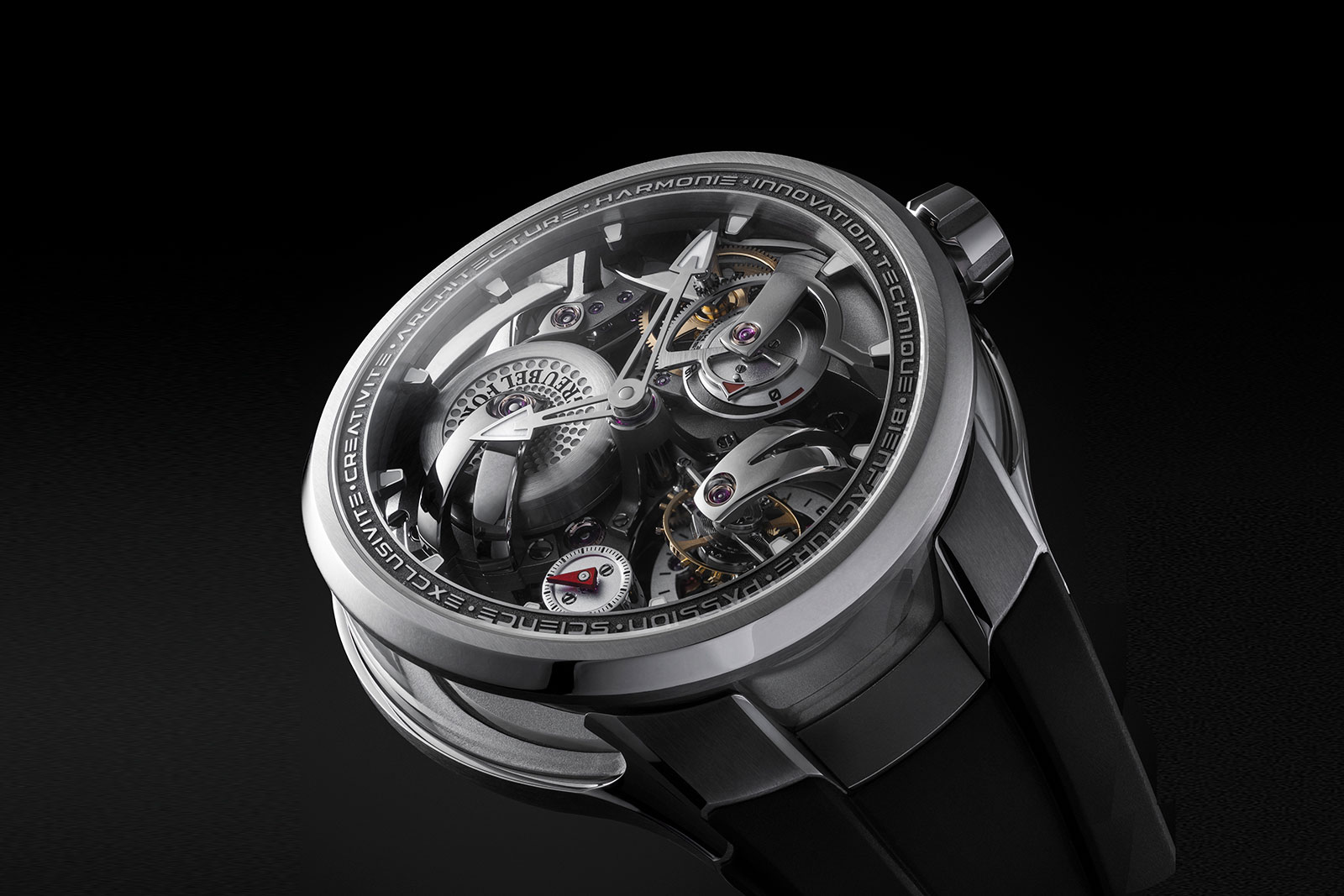 The unusual case construction is only evident at an angle 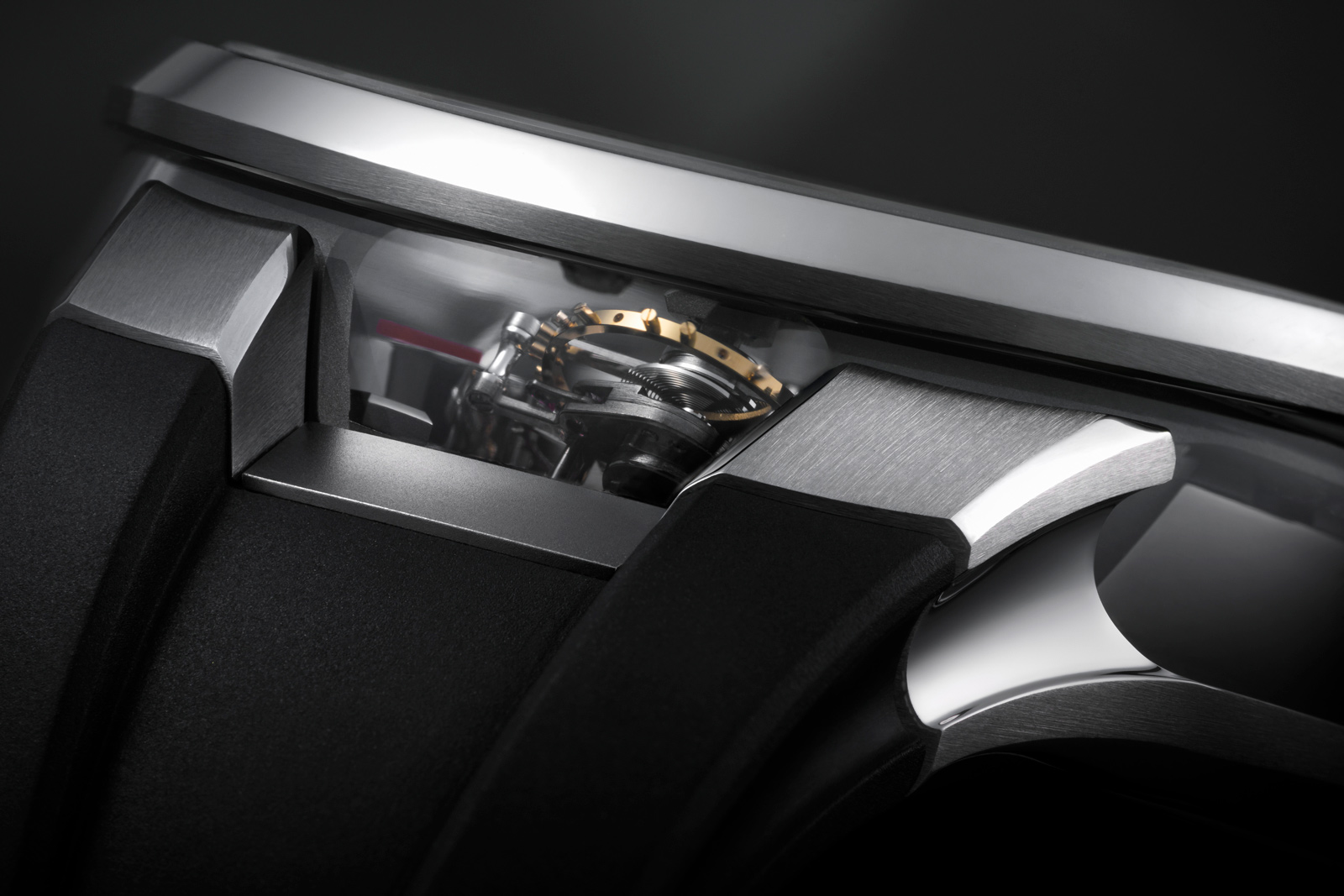 As it is with other variants of the Tourbillon 24 Secondes, one of the details worth examining is the high-speed tourbillon that’s inclined at 25 degrees

But the highlight is of course the movement. Forming the landscape of the dial, the movement does not utilise any large bridges or plates on the front. Instead, all of the moving parts are secured by multiple bridges that give the movement its highly technical and complex appearance. And it’s not just the number of bridges that create the look, but also the sheer size of some of them.

Equally impressive is the fact that all the bridges are actually highly-polished titanium, an alloy that is more challenging to mirror polish than steel. But Greubel Forsey takes it even further: some of the bridges, like that for the barrel, are arched and rounded, a flourish that is new for the brand. 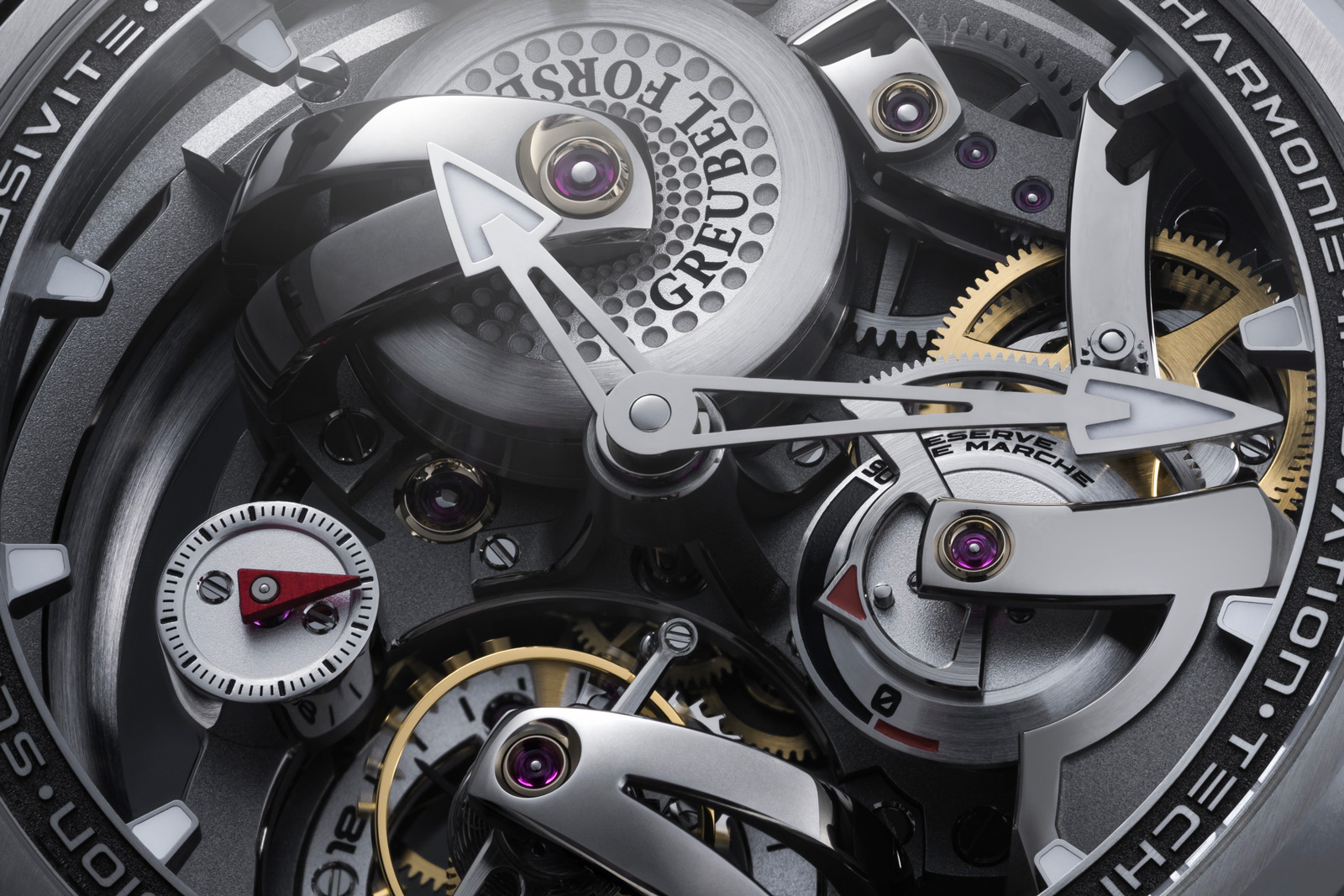 The barrel consists of three mainsprings stacked vertically, giving it a long running time of 90 hours, which is measured by the fan-shaped indicator at three o’clock

With the barrel and tourbillon showcased on the front, the back is essentially the base plate of the movement. The plate covers most of the back, though a portion of the gear train is revealed. While the plate is large, the details on the back are far from basic.

The finishing is impeccably execute as it is at the front. The plate is frosted on top and mirror polished on its bevels, while each of the jewels sit within a gold chaton. One of its most elaborate features is the lower bridge for the tourbillon, which is concentrically brushed – and of course bevelled by hand on all its edges. 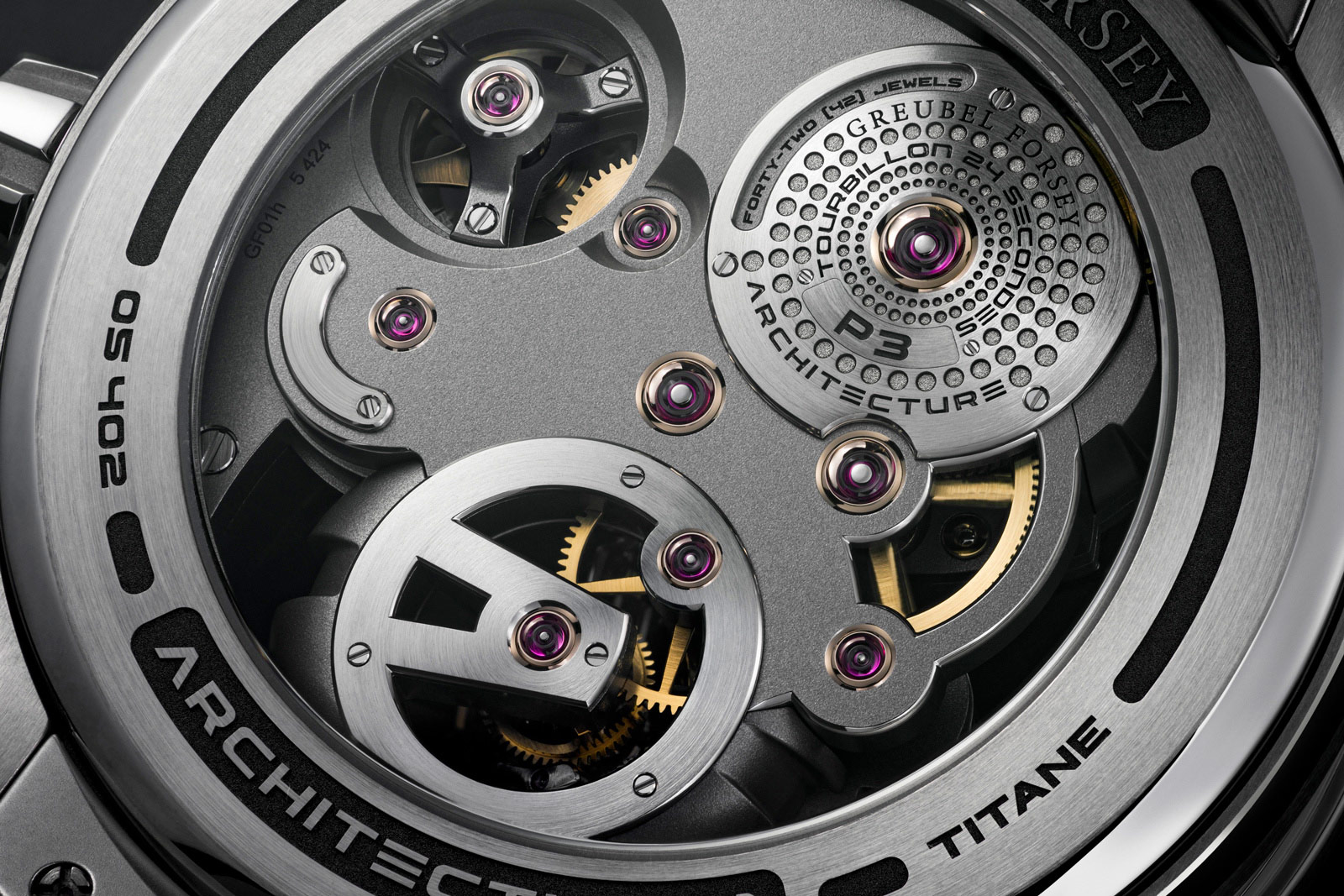 Limited edition: 11 pieces in 2022, and then 18 pieces each year from 2023 until 2025
Availability: Starting end 2022 at Greubel Forsey’s online shop and authorised retailers
Price: 706,200 Singapore dollars including GST

This was brought to you in partnership with Sincere Watch, the retailer for Greubel Forsey in Southeast Asia.