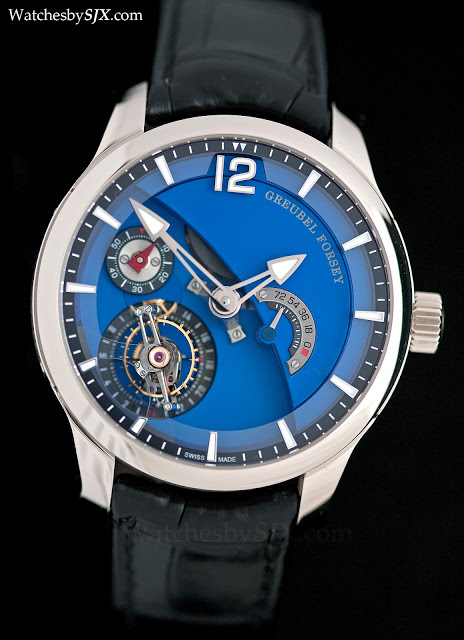 What sets this apart is the stunning, heat blued titanium dial. De Bethune pioneered the use of blued titanium for dials with its Dream Watch which had a concentric guilloche dial. And more recently De Bethune used a highly polished, star-chart dial on the DB25T Dead Seconds Tourbillon.

On the other hand, the Greubel Forsey T24S Contemporain has a more subtle, grained finish on the dial. Several details stand out. One is the thick, applied “12” numeral that anchors the dial. The other is the immense three-legged bridge that holds the hands. And notice the clear sapphire that sits above the dial with the hour indices, matched with the clear V-shaped bridge for the inclined tourbillon. Over on the back blued titanium is also used for the base plate. But the layout and design of the movement shows that Greubel Forsey knows watchmaking history, for the movement with its large wheels and angular bridge shapes is deeply reminiscent of 19th century pocket watches from Breguet and other greats. The case is platinum with tiny text in relief on the case band that is characteristic of Greubel Forsey.