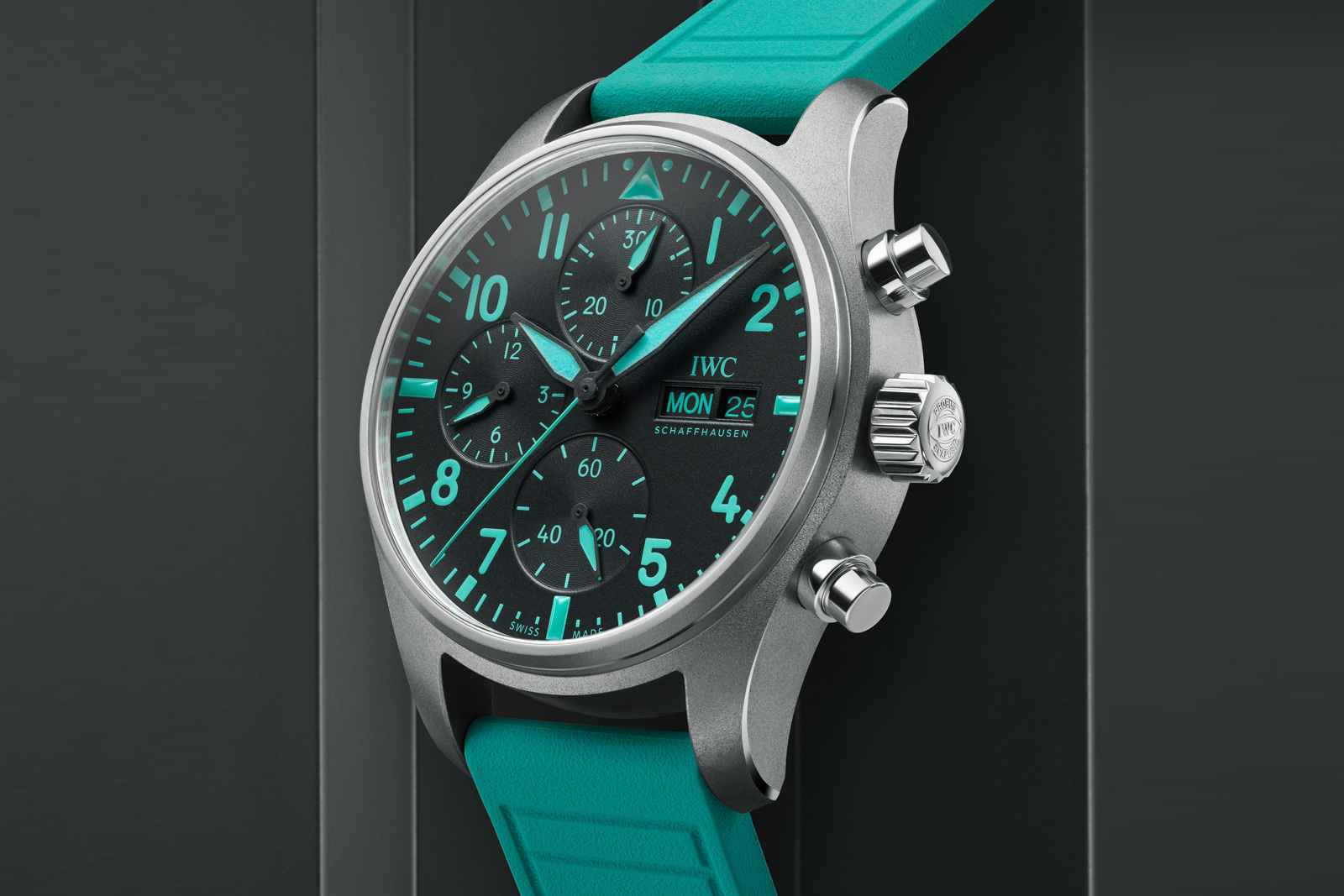 Facelifted in 2021 with a slimmed-down case that went from 43 mm to 41 mm, the IWC Pilot’s chronograph is a longstanding bestseller that’s now more wearable. The watchmaker has now created an online-only edition of the watch for its F1 partner, the Pilot’s Watch Chronograph 41 “Mercedes-AMG Petronas Formula One Team Edition”.

Conceived to celebrate the inaugural Miami Grand Prix, the new chronograph is the first official team watch, meaning it will be worn by all team members ranging from mechanics to strategists. It’s naturally dressed in the team’s signature colour, the green of its title sponsor, Petronas. 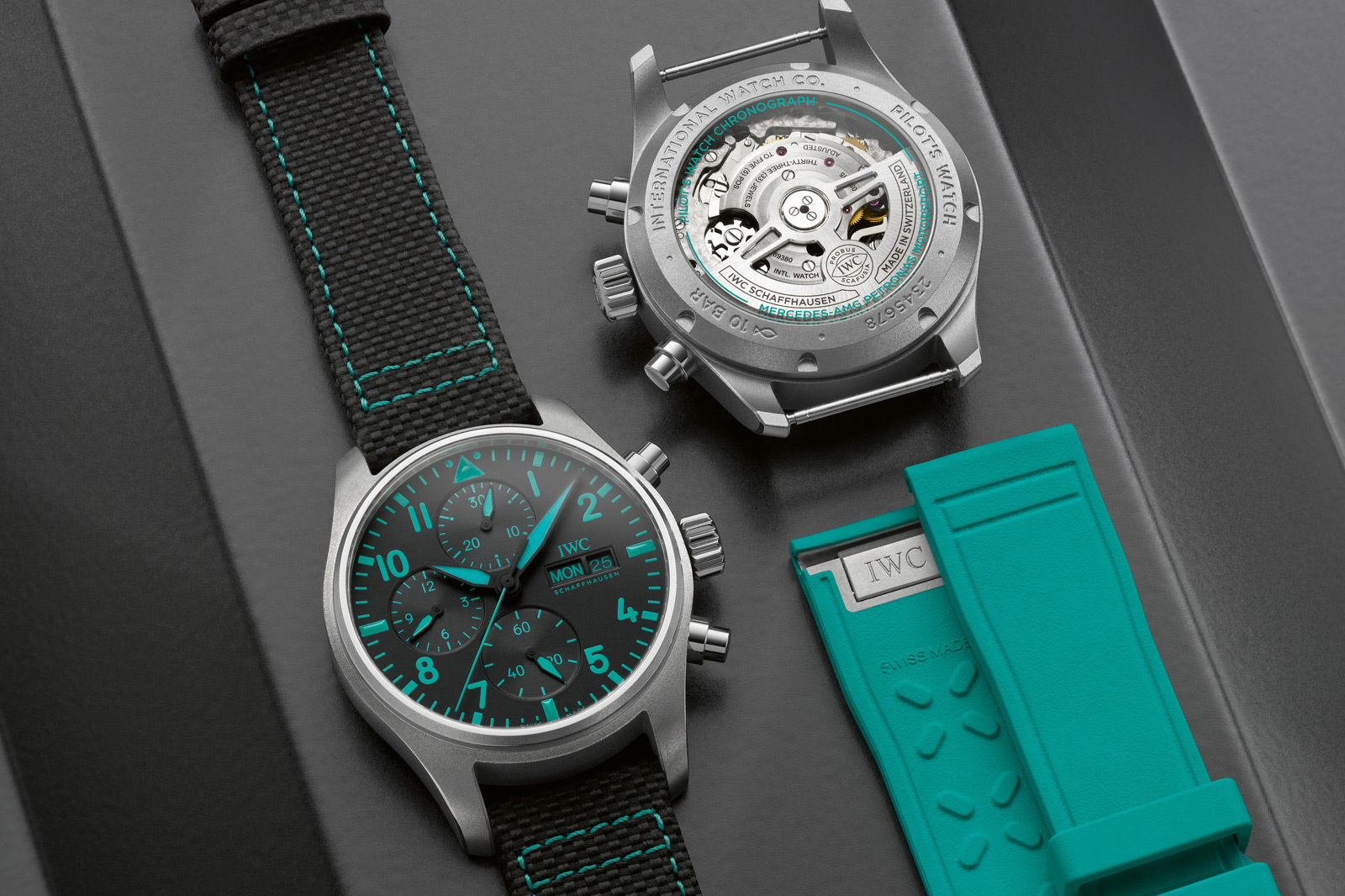 The overall design for the new chronograph appears almost identical similar to the standard model, except for the colour. But a few additions reveal themselves up close, including the sandblasted titanium case, which set it apart from IWC’s current offerings.

The case material is notable – no other Pilot’s chronograph has a sandblasted titanium case – and sensible choice for a “instrument” watch. It makes the F1 team edition lighter than its counterparts in the Pilot’s Watch line, which the matte, grained surface suits the functional spirit of the watch. And the metal also makes sense given the Formula One context since titanium is widely used in automotive engineering due to its corrosion resistance and high strength-to-density ratio.

But it is the mint green that makes the watch truly unique. The green livery will be appealing to fans of the racing team, and more broadly its resemblance to currently fashionable Tiffany blue will no doubt be a big plus. 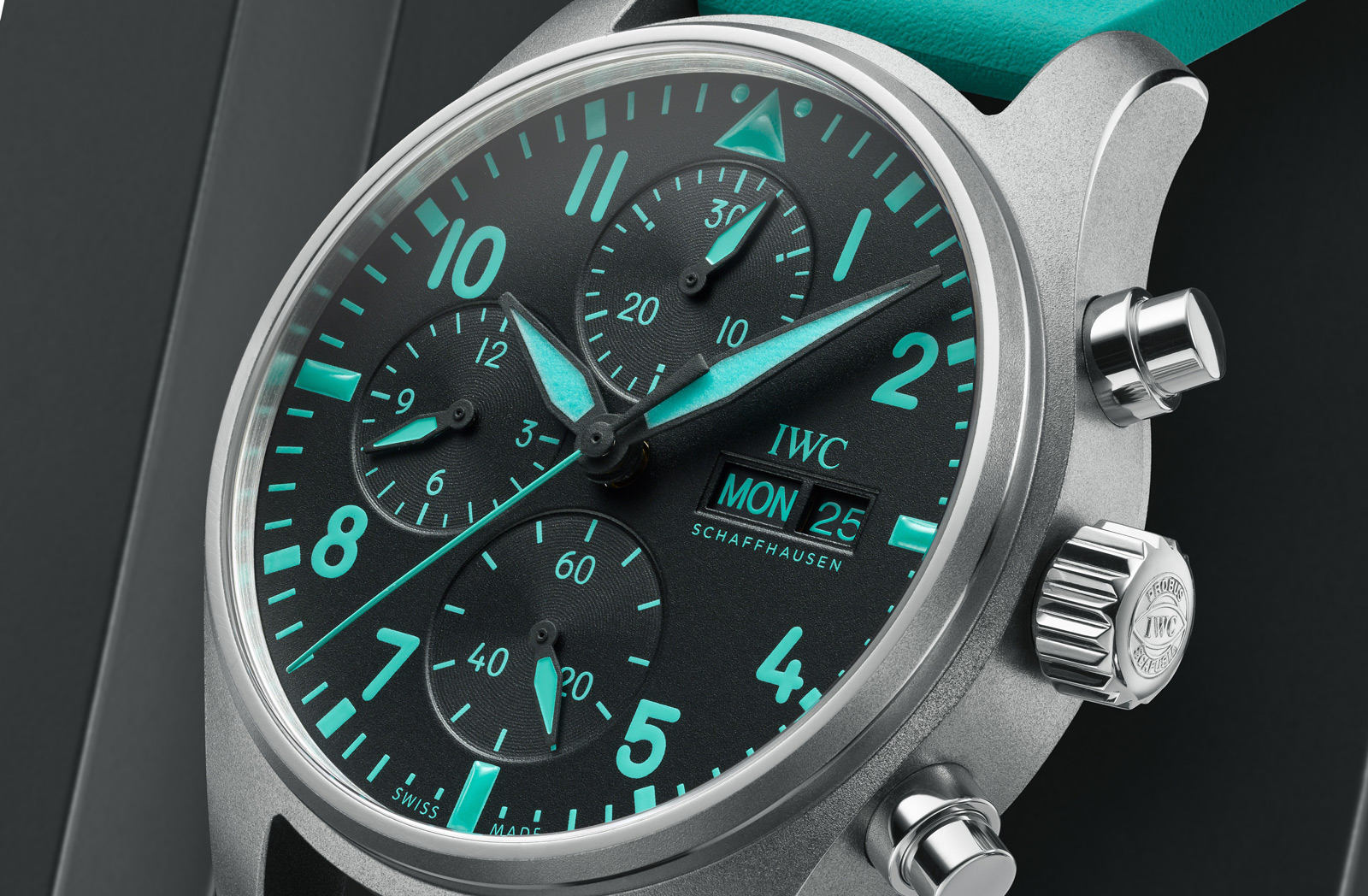 Conceptually, the collaboration comes as no surprise given that the two brands have been partners for years; in fact, IWC and Mercedes-AMG (the carmaker and not the F1 team) started their partnership in 2004. And a chronograph is also the most appropriate complication for a racing team. That said, there’s a disconnect between the idea of an aviator’s watch and the official timepiece for a Formula 1 team.

Priced at US$7,850, the F1 team watch costs less than 10% more than the regular-production Pilot’s chronograph 41 in stainless steel – a modest premium that is well worth it especially in light of the case material. This new release is a good realisation of a historically significant partnership.

The choice of the same green for the markers, indices, and lettering creates an aesthetic that is appealing and distinctive, while still retaining the classic look of IWC’s signature pilot’s chronograph.

The watch is fundamentally the classic pilot’s chronograph, so the case retains the same dimensions. It is fairly thick, though it’s almost a full millimetre thinner than its 43 mm predecessor. While still big at 41 mm, it is far more wearable than the 43 mm version. More importantly, the fact that the case is titanium will make it more wearable since it will be tangibly lighter than the steel model. 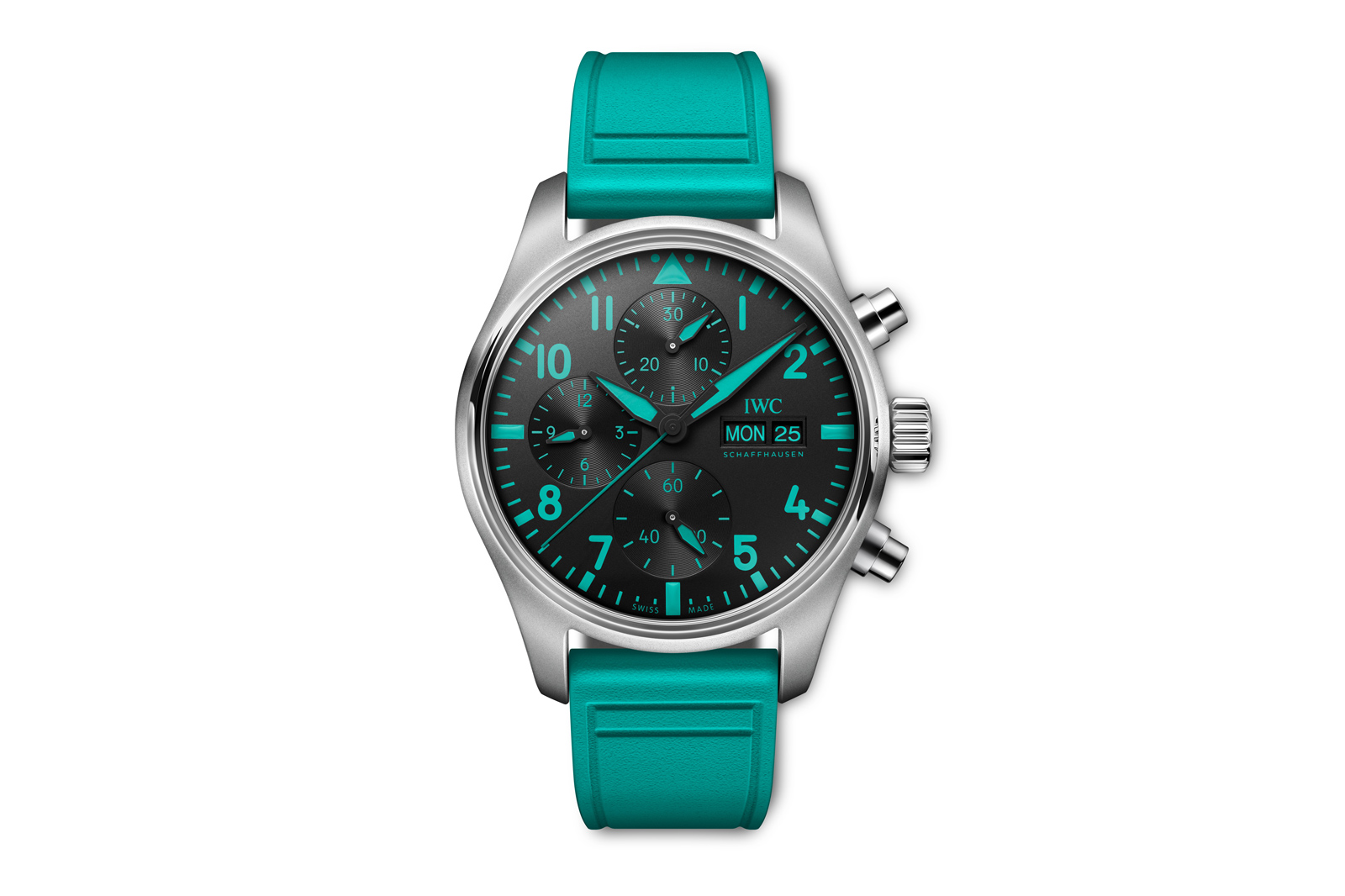 The movement inside is the cal. 69385, the same movement that powers the standard Pilot’s chronographs. Introduced in 2021, the cal. 69385 is part of the 69000 family of movements. Like most IWC calibres, the 69000 is engineered to be robust and functional, while having an industrial aesthetic.

Conceived to replace the cal. 79320 – which was based on the Valjoux 7750 – the 69000 is meant to be an upgraded substitute with similar dimensions but features like a column wheel and Pellaton winding mechanism. 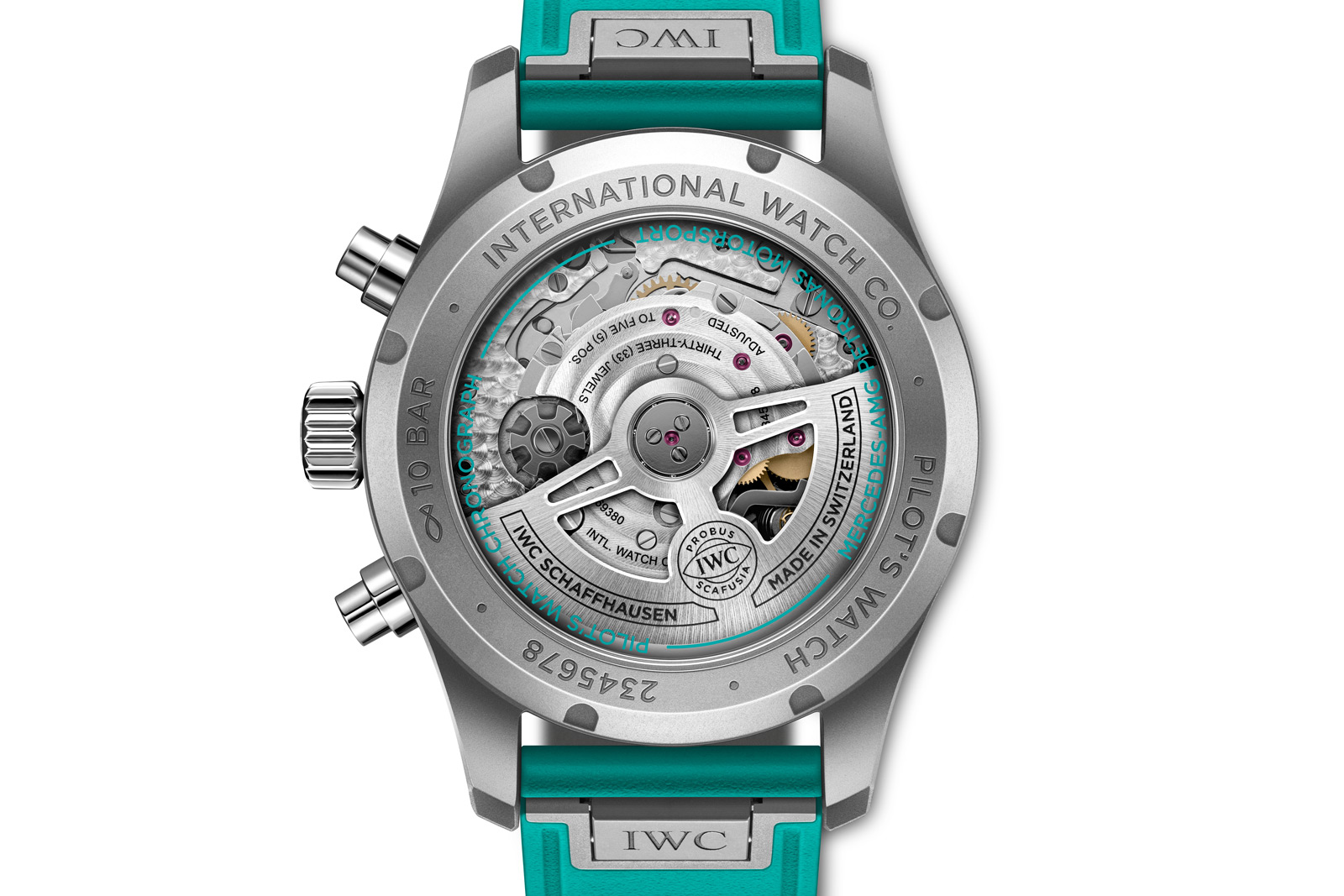 The movement can be admired through a sapphire case back

Limited edition: No
Availability: Only on IWC’s online store
Price: US$7,850; or 11,700 Singapore dollars