We round up five notable watches amongst the “indies”, ranging from the quirky and fascinating Urwerk that’s an upgraded example of the brand’s earliest watch to the stunningly engine-turned Andersen Genève Quotidiana.

Perhaps the avant-garde independent watchmaker, Urwerk is best known for revolutionising the presentation of time, having invented time displays using satellite cubes on a carousel and prisms in cylinders.

But the brand’s creation for Only Watch 2021 looks nothing like its recent work, because it’s a quarter-century old, an artefact from the brand’s start-up days. The UR-102 “Gaïa” is a prototype of one of the brand’s earliest models – it is actually a vintage Urwerk – but dressed up smartly for the occasion, with a special case back decoration that signifies the brand’s success.

The platinum case back is adorned with a sparkling, deep blue emblem that alludes to the Gaïa Prize, which Urwerk’s founders won in 2020

That said, being an Urwerk, the time display is far from rudimentary. While neither a cube nor a prism, it is still a wondering hours, with a tiny window showing the hours that travels around the fan-shaped minute track.

The UFO-like case goes well with the wandering hours, which is a nod to the motion of stars

At just 38 mm wide, the case is notably classical in size for an Urwerk

And the case is best described as sci-fi Art Deco – it looks like a flying saucer, but streamlined and simplified. Its sleek lines are in stark contrast to the brand’s modern-day watches that all boast complex case forms – illustrating the brand’s limited resources in its early days.

Like the UR-102, the Krayon Anywhere has a cosmic inspiration. Already equipped with a sunrise and sunset indicator, the Anywhere for Only Watch gets a thematically-congruent miniature painting – an abstract reinterpretation of Monet’s Impression, Sunrise.

A major upgrade over the stamped guilloche dial found in the standard Anywhere, the miniature painting is notably fine, accomplished via a process similar to champleve enamelling, albeit with lacquer instead of enamel paste.

Functionally, the highlight is the sunrise and sunset indicator, which is identical to that of the standard model: the light and dark blue rings change expand and contract in different seasons, reflecting the different day and night length. And the intersection between the two rings indicate sunrise and sunset time.

A sun-shaped pointer travels around the dial once a day, functioning as a 24-hour indicator, but it isn’t a GMT hand

The movement is identical to the standard production model. But it is the original prototype of the Anywhere calibre, making it a bit more special, just like the UR-102 “Gaïa” above.

Elaborately finished, despite being a prototype

The Continuum is the first luxury-sports watch from Roman Gauthier and the Only Watch edition was the opening act, having been announced before the regular-production model. It’s is a finely executed watch that’s still very much a Roman Gauthier, especially in terms of the movement. 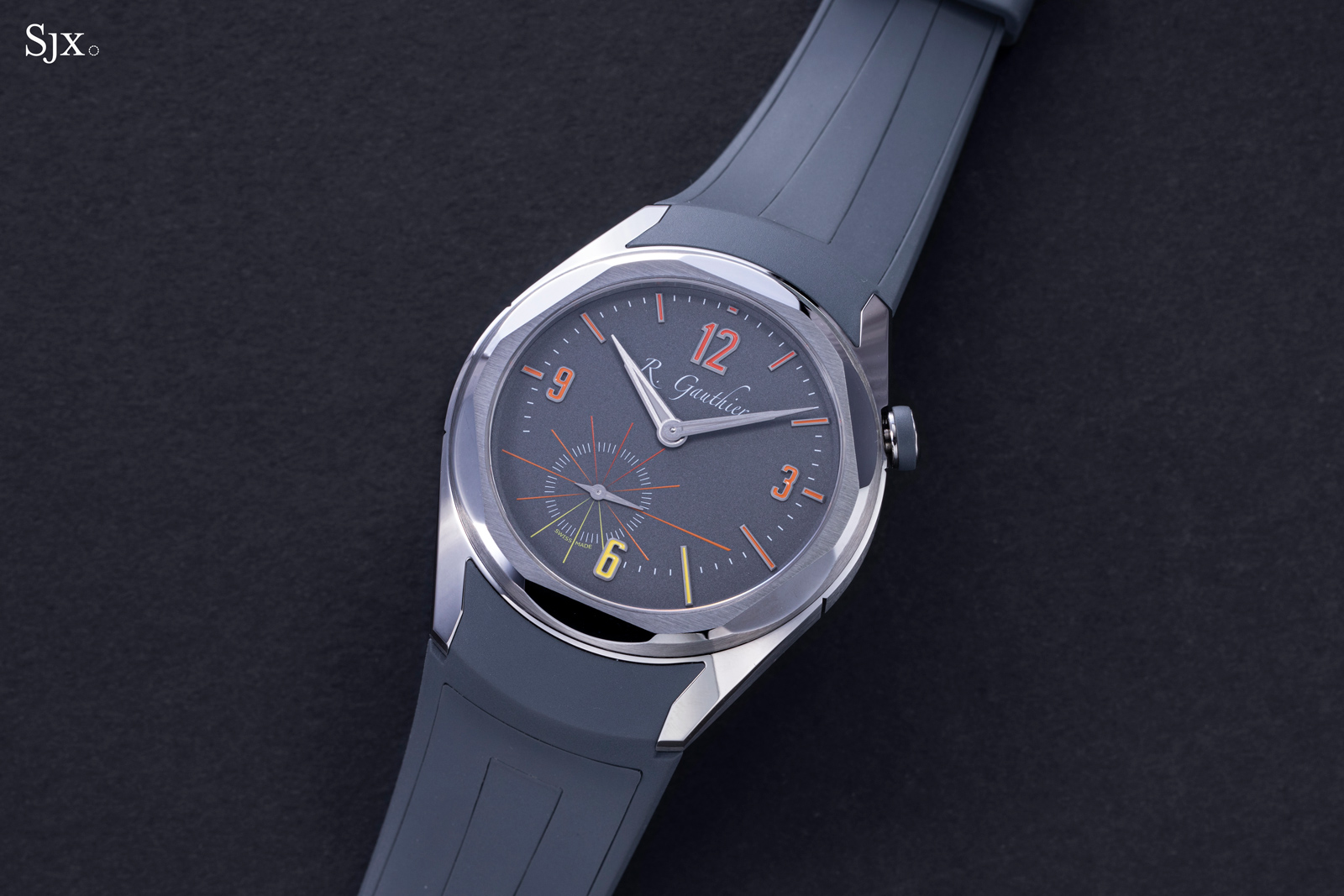 The Only Watch edition shares the case and movement of the standard version, but the colourful dial is a one-off. The hour markers and elongated small seconds scale are in a graduated yellow and orange, giving the otherwise monochromatic dial a bit of zest.

Because it’s a Romain Gauthier  – a brand best known for its innovative interpretation of the fusée and chain – the technical qualities of the watch are obvious, even from afar. The movement architecture is elaborate, so are the details like the wheels with petal-like spokes. 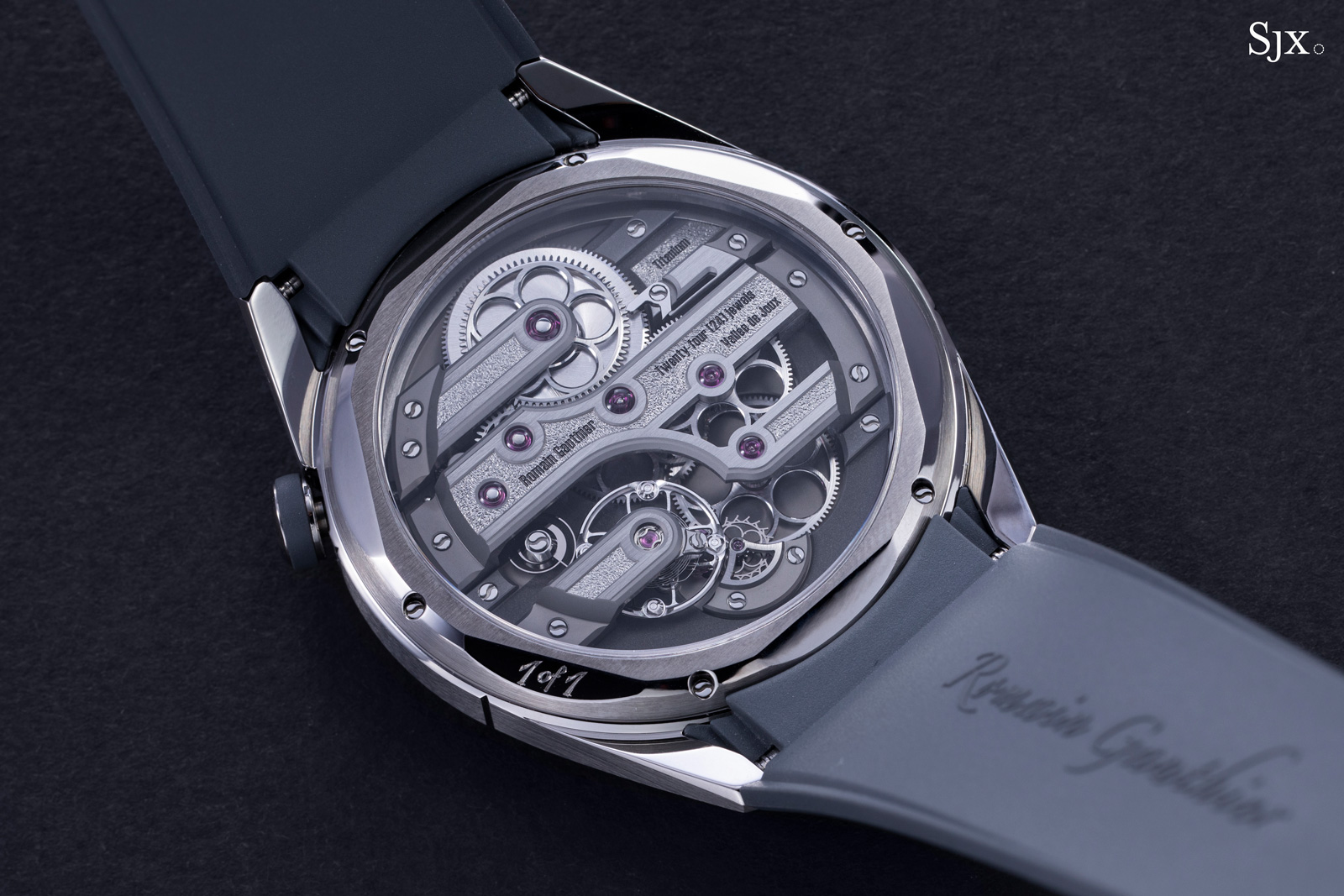 The movement is decorated to a high standard, incorporating a few hand-finished details typical of the brand, such as the frosting on the top of the bridges as well as the base plate. But the movement decoration is identical to that in the standard model; a differentiated decor would have made this more special. 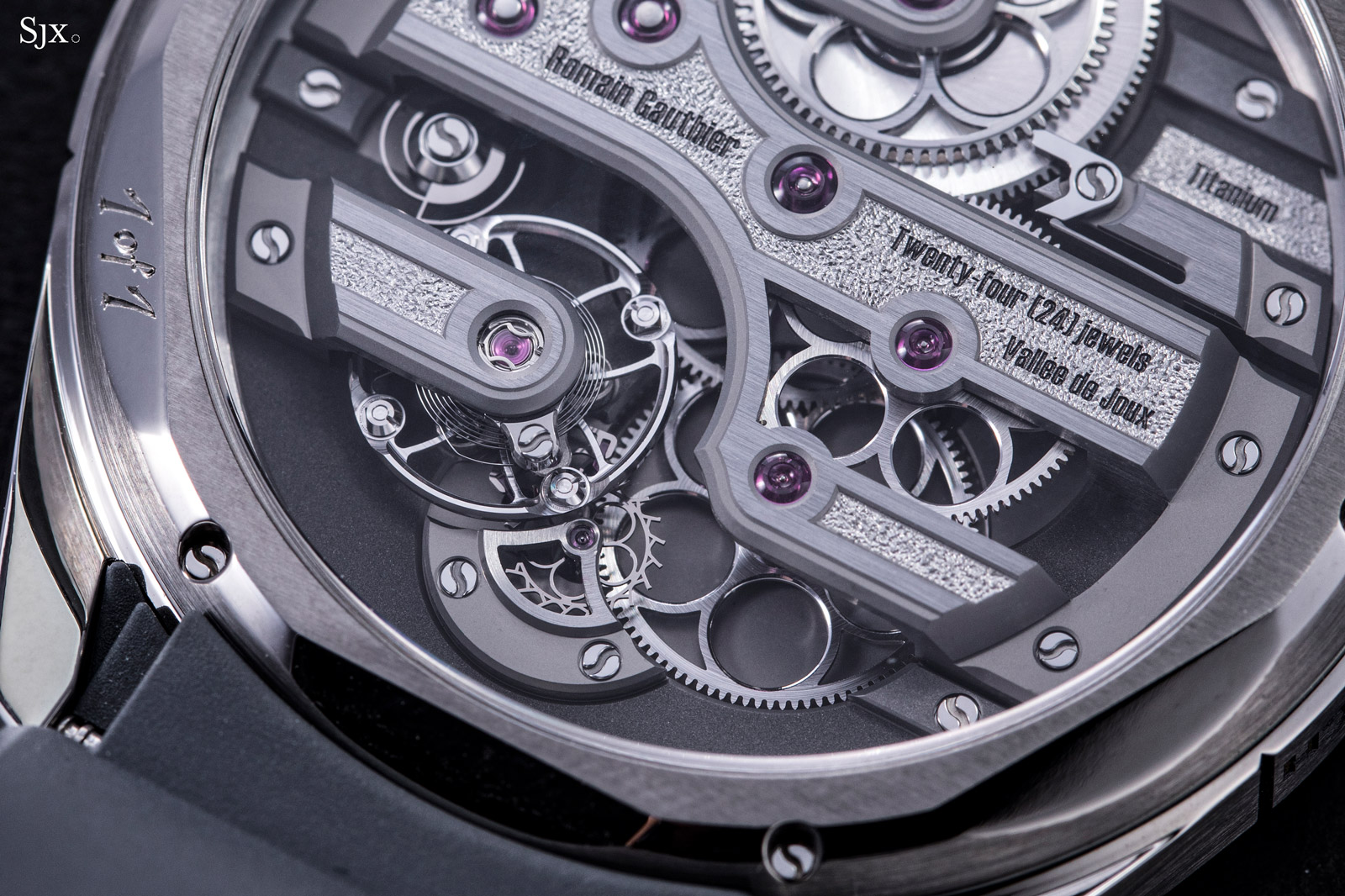 While the lots above are all from prominent independent watchmakers, this is the work of a new brand.

The 1809 Tribute to Jackson Pollock has several notable qualities, including an appealing, symmetrical layout on both the front and back, and artisanal enamelling on the dial. 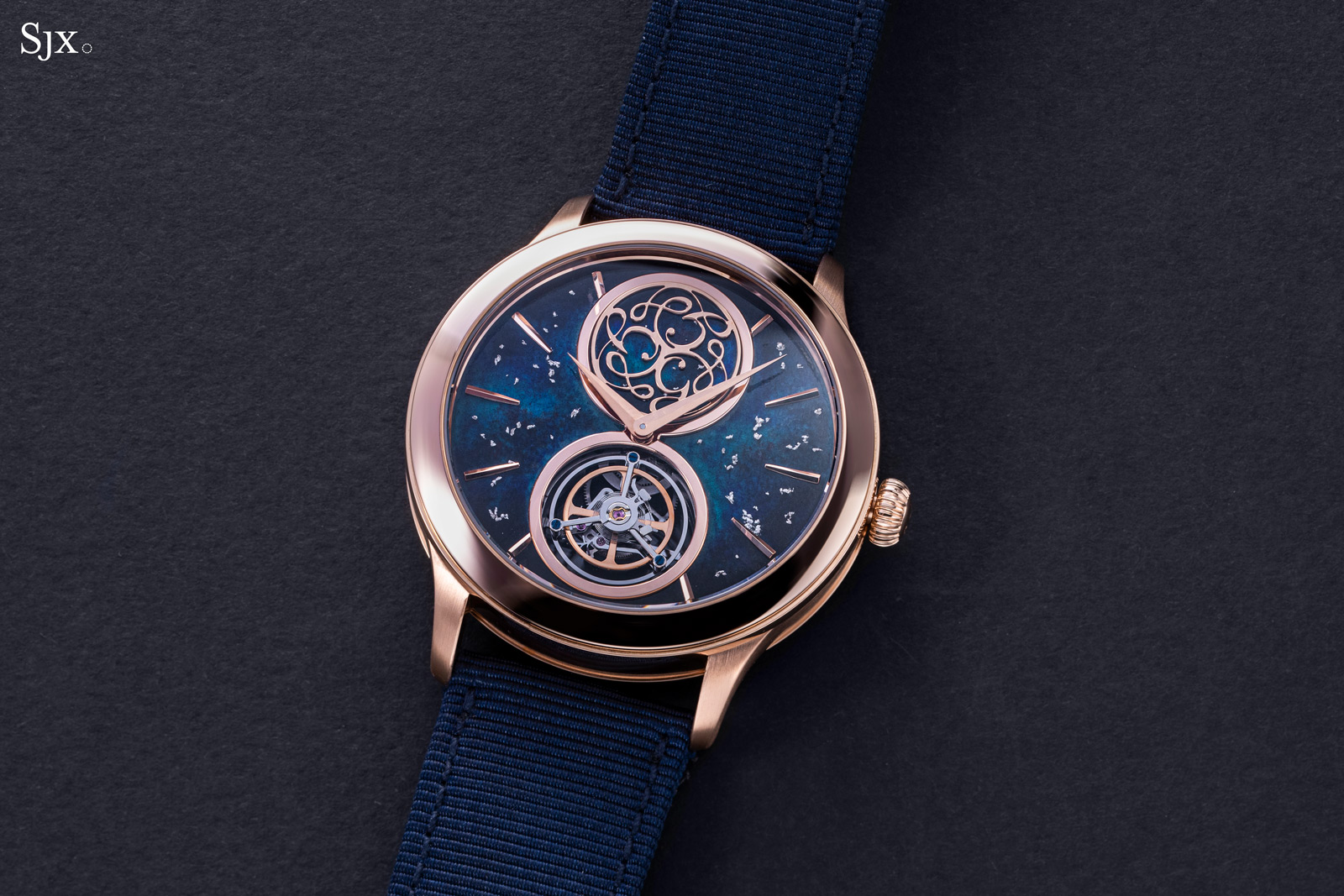 The dial is paillonnee enamel, which is made up of tiny, delicate slivers of gold foil suspended in translucent, graduated enamel, a finish that requires multiple firings to achieve.

Interestingly, the curlicued logo at twelve isn’t stationary. Instead, it spins freely with the movement of the wrist, as the emblem has a weighted edge on half its circumference. All that is hidden under the dial, making it a “mysterious” display. 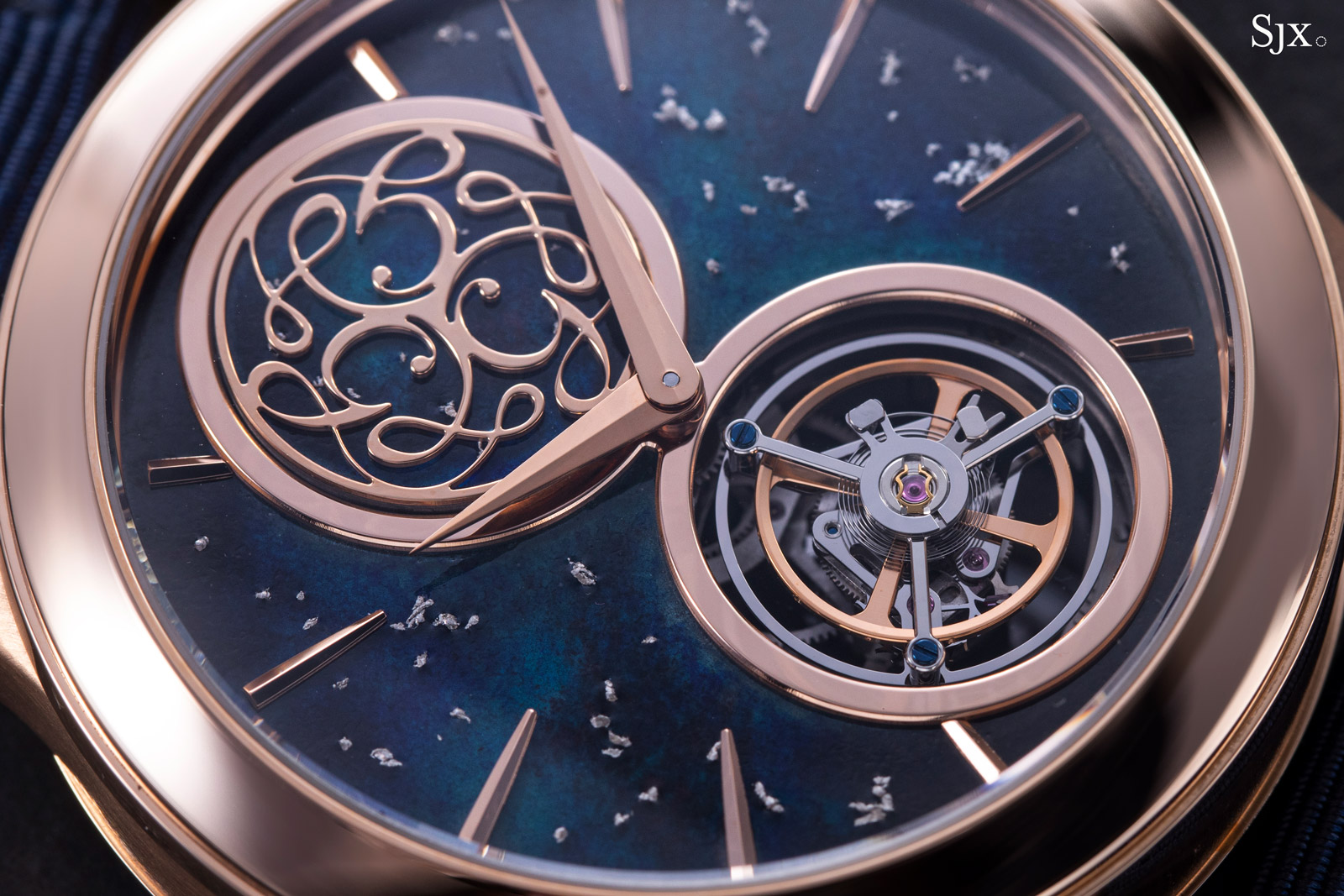 The only weakness is the tourbillon assembly, which is basic in architecture and finish when compared to the rest of the watch

And the movement has character, thanks to excellent layout and finishing. It’s an automatic movement wound by a peripheral rotor, exposing the wide bridges and symmetrical layout. It’s also finished well with hand-brushed frosting on the bridges that also have wide, polished bevels. 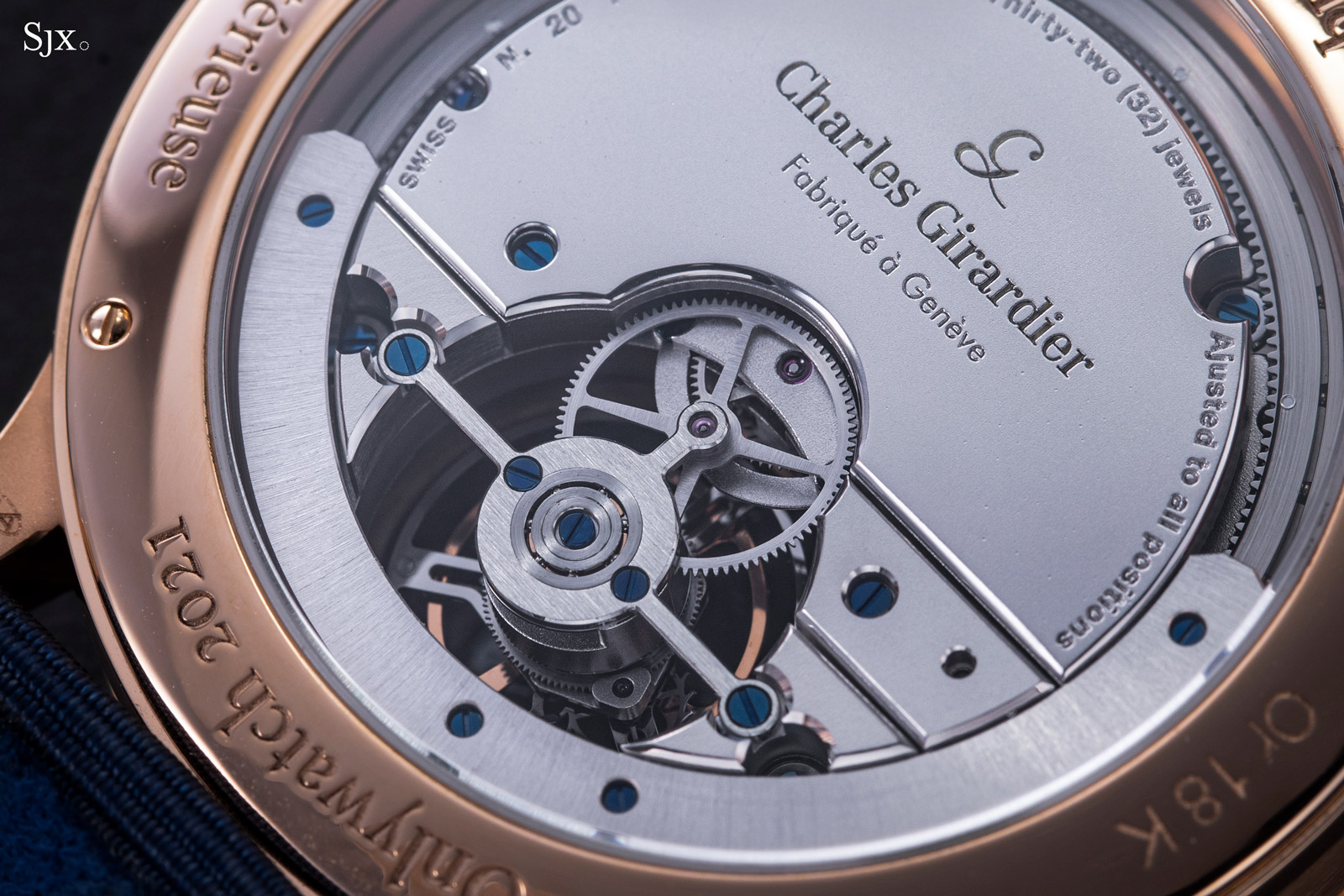 Last but not least is a timepiece from the longest-established independent watchmaker taking part in Only Watch 2021. Now in his fourth decade of watchmaking, Svend Andersen – founder of  Andersen Genève – is very much a pioneer in custom and bespoke watches.

The Quotidiana is an example of such custom work. It’s an amalgamation of many classical elements, but executed in a manner that’s quintessentially Andersen.

The two-tone case is “Empire” style, which means a fluted middle with narrow, soldered lugs. Importantly, the case is made via traditional techniques – on a lathe without any computerised machines.

The case is especially stunning with its two-tone construction, a nod to vintage pocket watches

But the most attractive element is the dial. The Quotidiana sports twin, arched openings that are a lot more attractive than conventional calendar windows. Add to that the striking, triangular Losanges Magiques engine turning and  the result is a dial that’s both striking and artisanal.

Even the language of the day display is amusing – it’s done in seven languages, one for each day

The movement is a thin Frederique Piguet cal. 1150, which has been decorated in an appealing manner.

It’s visually striking, in part thanks to to the gold rotor that’s decorated with a radiating barleycorn guilloche that increases in scale towards the outer edge of the rotor. And the engraving on the movement as well as the case back is done by hand.

A historical watch upgraded for the future.