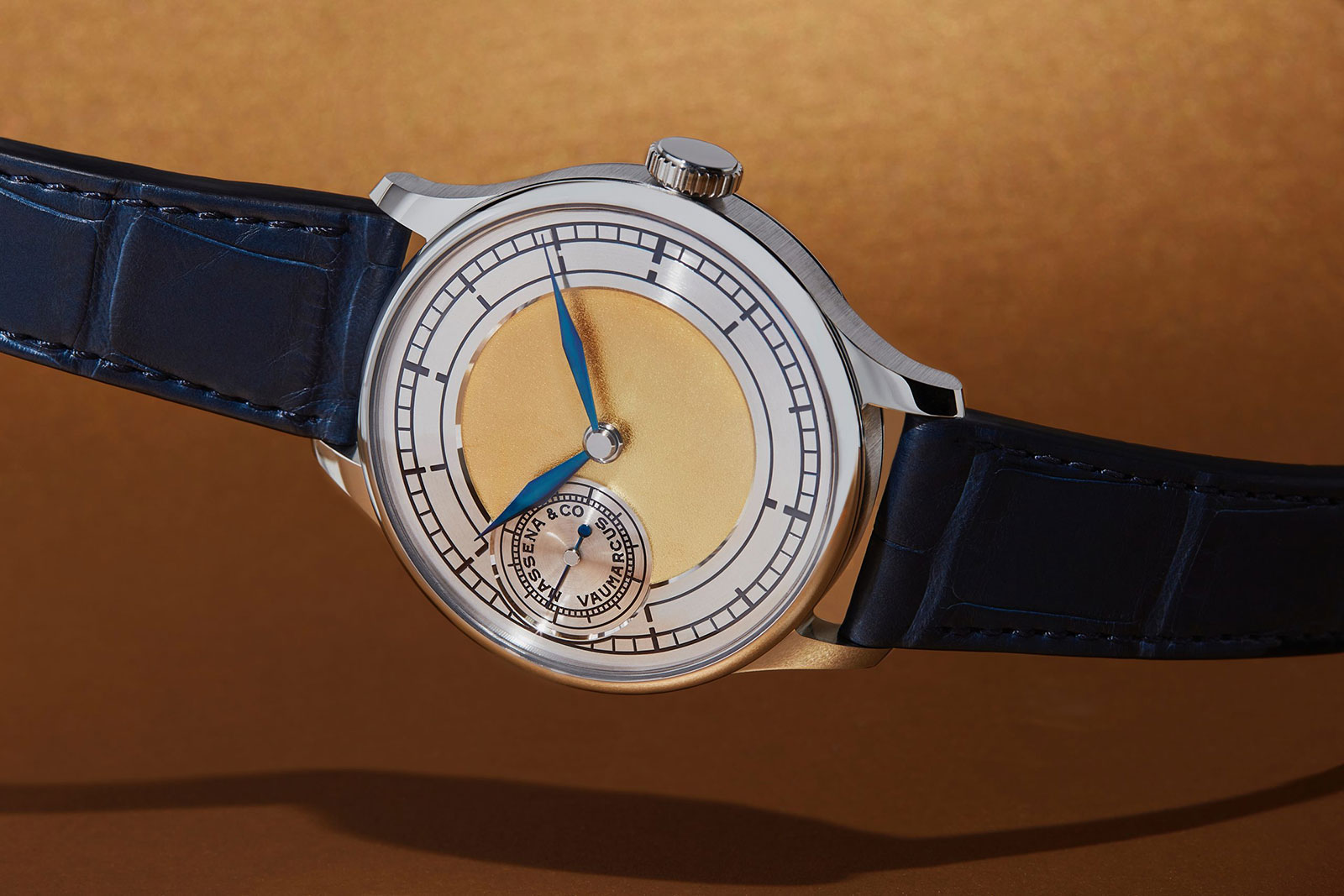 Following a slew of affordable, vintage-inspired watches, with several made by Habring2, Massena Lab has moved decidedly upmarket with the Old School. The time-only wristwatch retains a typical of the American watch-design studio – once again vintage inspired with a sector-like dial – but boasts a significantly more refined finishing.

The model name is a play on words – a reference to its classical design but also the watch is meant to evoke a montre d’école, or “school watch” in English, the graduation project of a watchmaking student. Despite the academic inspiration, the Old School is the work of an experienced watchmaker, Luca Soprana, who cofounded Ateliers 7h38, the complication workshop best known for the Jacob & Co. Astronomia Tourbillon. 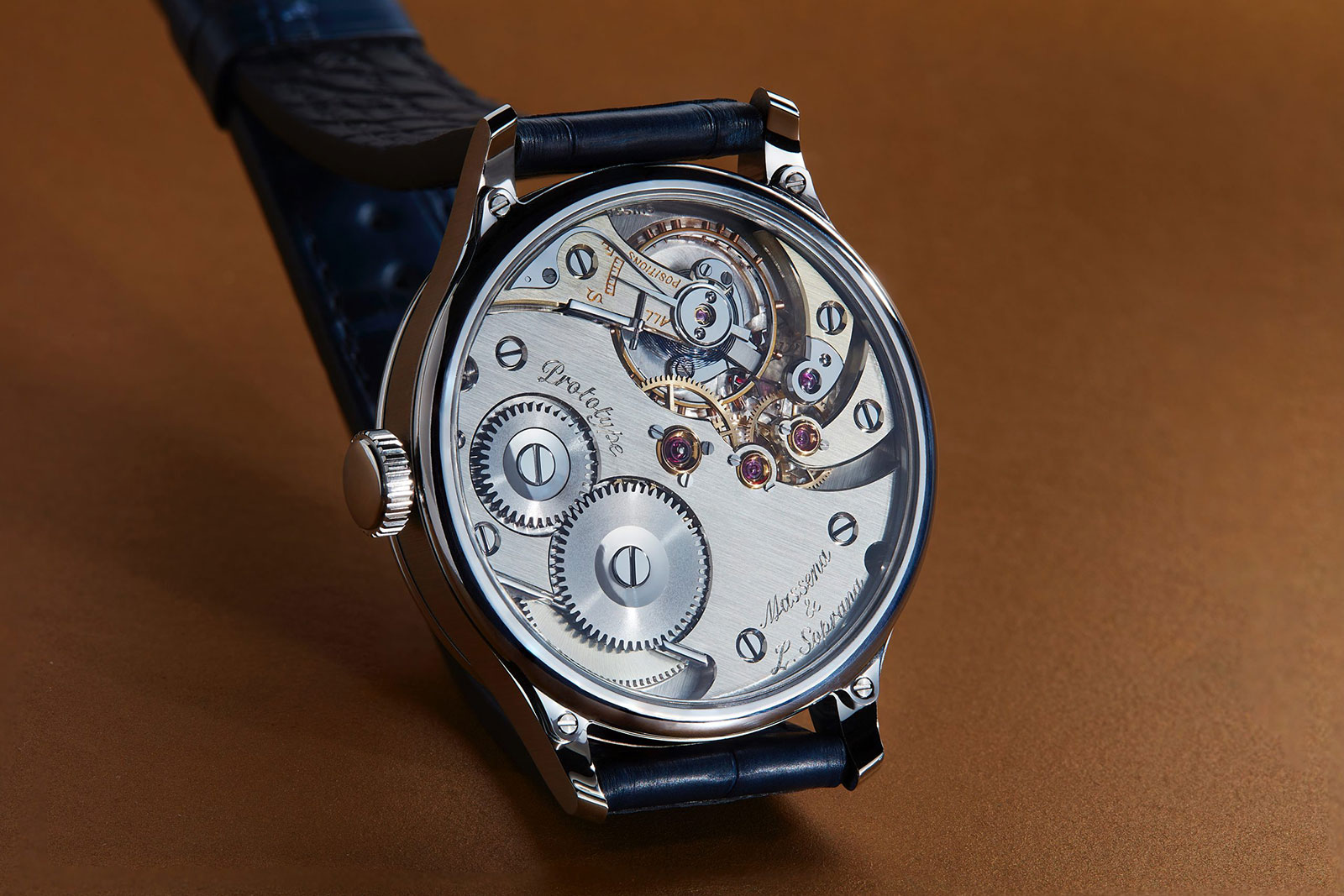 Massena Lab founder William Rohr is an industry veteran – amongst other things he’s been managing director of Antiquorum Switzerland and consultant to Bonhams – who has cultivated a sharp eye for design an details.

Mr Rohr also has a finger on the current pulse of watch collecting, and the Old School unsurprisingly encapsulates what many enthusiasts currently desire. The design and movement feature traditional elements that are popular now. It’s not meant to be an intriguing or creative product – it is old school after all – but instead a simple watch executed well.

One element that illustrates Mr Massena’s keen eye is the dial. The simple design has just enough flair to make it attractive. Importantly, the sectored layout and the small seconds leave the large dial less empty, so it looks good on the wrist despite being flat and wide, evoking oversized vintage watches (it does have a pocket watch movement inside). 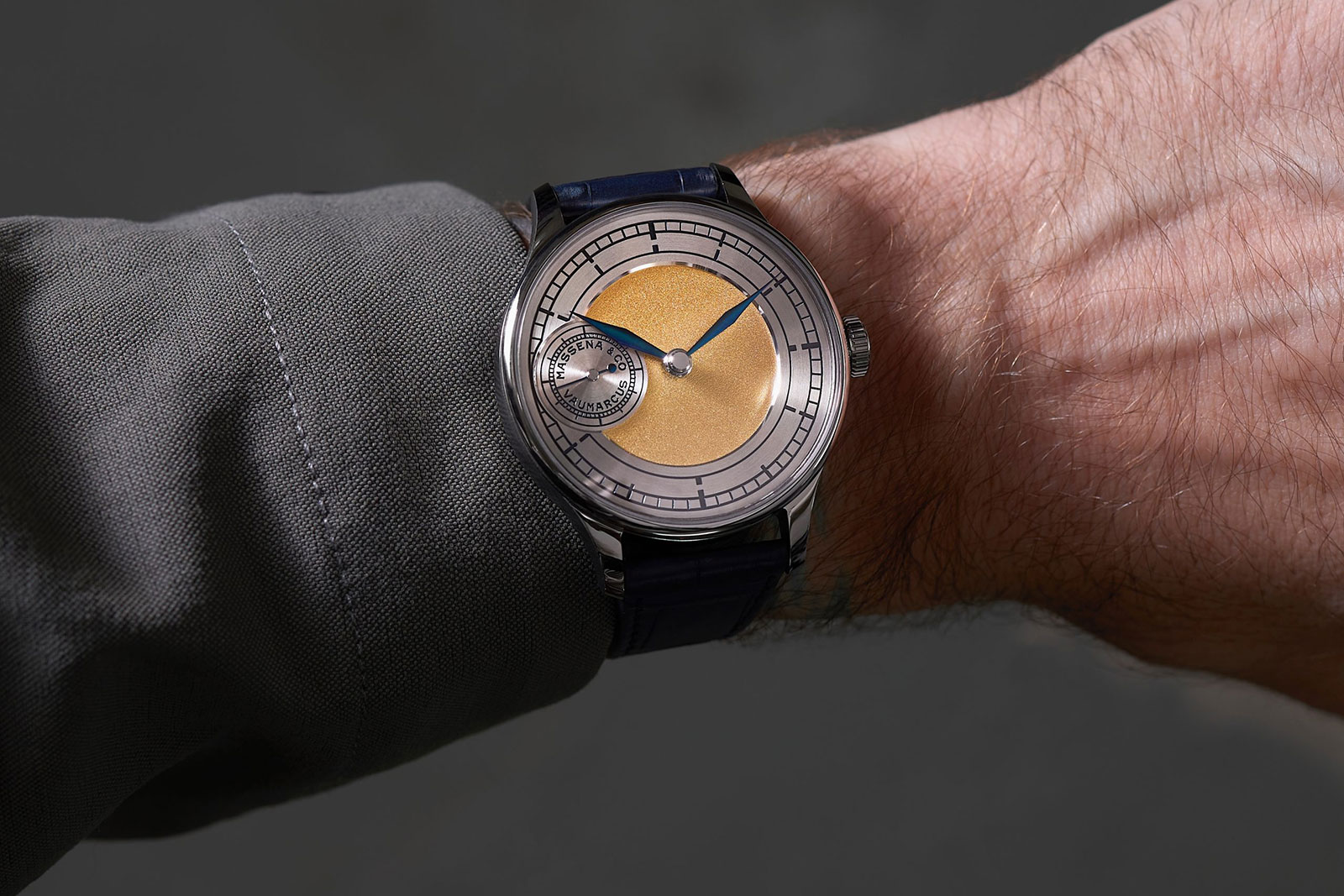 The back is equally old school. The origin of the movement’s architecture is unrevealed, but it is a vintage pocket watch movement of the same calibre that Mr Soprana worked on when he was in watchmaking school.

And that explains why it has the feel of an early- to mid-20th century pocket watch movement, like those made by Omega and Longines. That means a big balance wheel, “finger” bridges, and even an elongated winding click spring. And it’s also decorated by hand.

The styling and finishing of the movement proves the versatility of the man behind the movement, Luca Soprana. He is not known for such classical work; the outfit he found, 7h38, is primarily a construction of exotic movements, most famously for Jacob & Co.

At US$39,500, the Old School does costs a lot, but is fair enough value just because it possesses a good mix of characteristics that are now desirable – classical aesthetics on both front and back plus hand-finished details.

Despite the “sector” layout, the dial is notable for the plain centre, which is actually frosted with a hammering technique done by hand. And the granular surface is complemented by a shiny bevel that surrounds the champagne-tone centre. 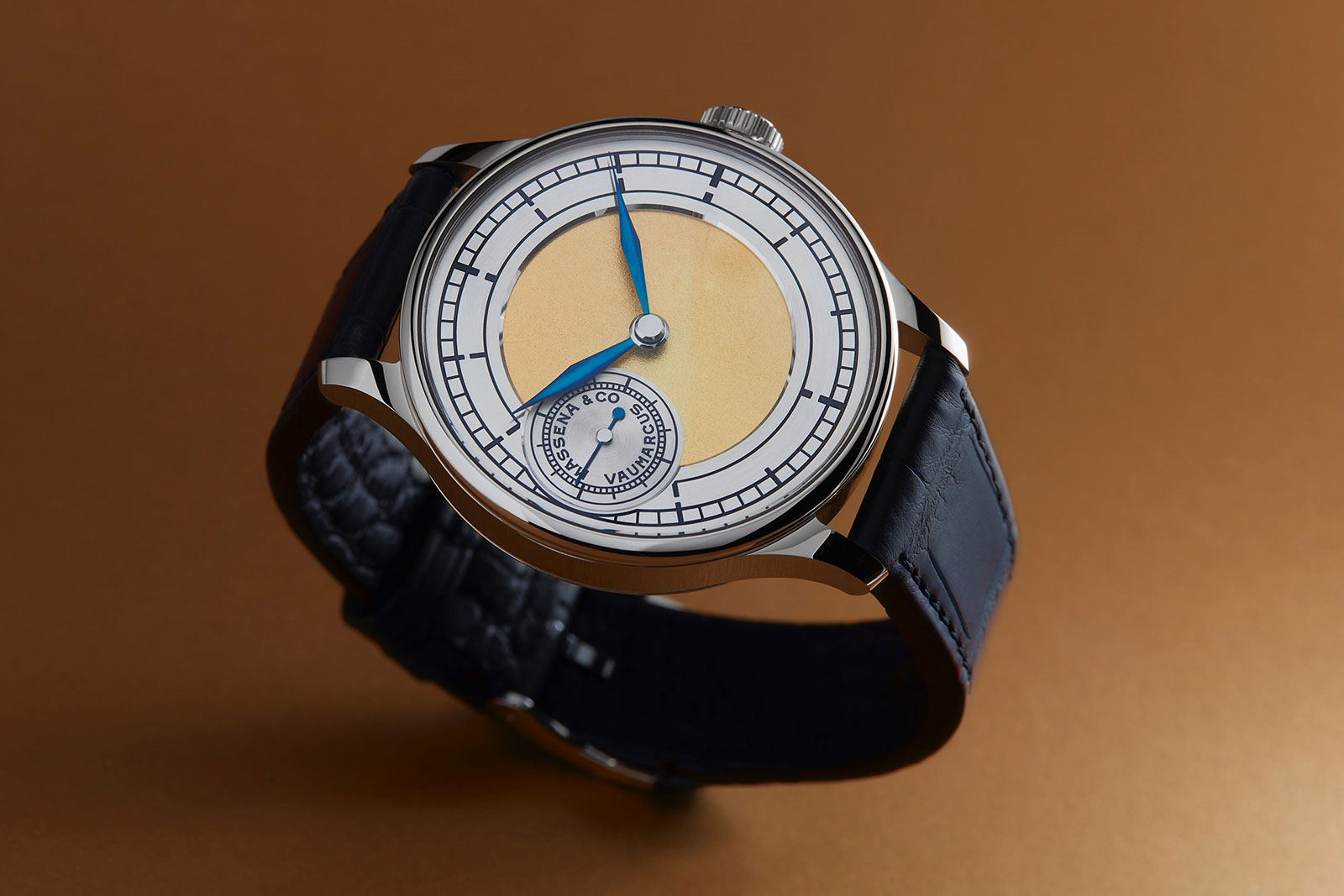 But the Old School is largely about the movement. It’s a simple movement – the large case size of 41 mm reveals its pocket-watch origins – but nicely refined. Its vintage-inspired details will no doubt appeal to watch enthusiasts.

Amongst the details are “finger” bridges for the fourth and escape wheels, jewels in chatons, and an elongated click spring. That said, the barrel bridge appears a bit plain relative to the rest of the movement.

One element that is surely vintage is the bi-metallic balance, a traditional solution to compensate for the effect of temperature fluctuations on the stiffness of hairspring. Being cumbersome and costly to make today – and entirely unnecessary since modern hairsprings are not as sensitive to temperature fluctuations – such balance wheels are not found in modern watches. Consequently, the bi-metallic balance (and the paired blued-steel, overcoil hairspring), along with the escapement, are unquestionably vintage components. 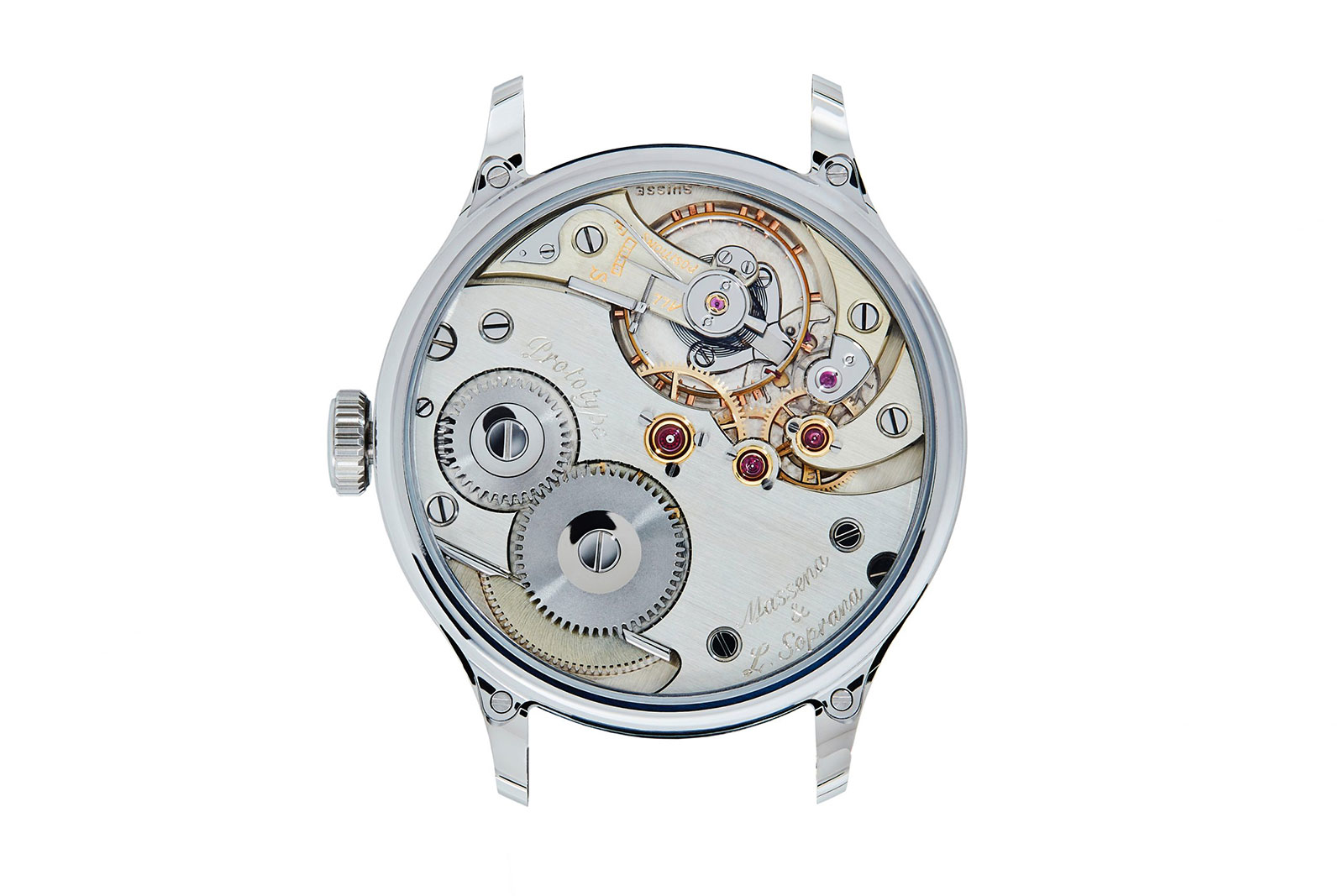 The movement has been decorated to what is expected of a well-finished, three-hand watch. Most notably, the bevels on the bridges are rounded and polished, instead of the flat bevels found in industrially-finished movements. Also attractive are the black-polished steel parts, such as the cap for the escape wheel jewel and pallet fork bridge.

Less obvious are the polished countersinks for the screws, as well as the linear graining on top of the bridges, a clean surface finishing that’s uncommon but liable to show imperfections easily. At the same time, the teeth of the crown and barrel ratchet wheels appear be polished but subtly – more prominent, wider bevels on the teeth would have helped the movement shine even more.