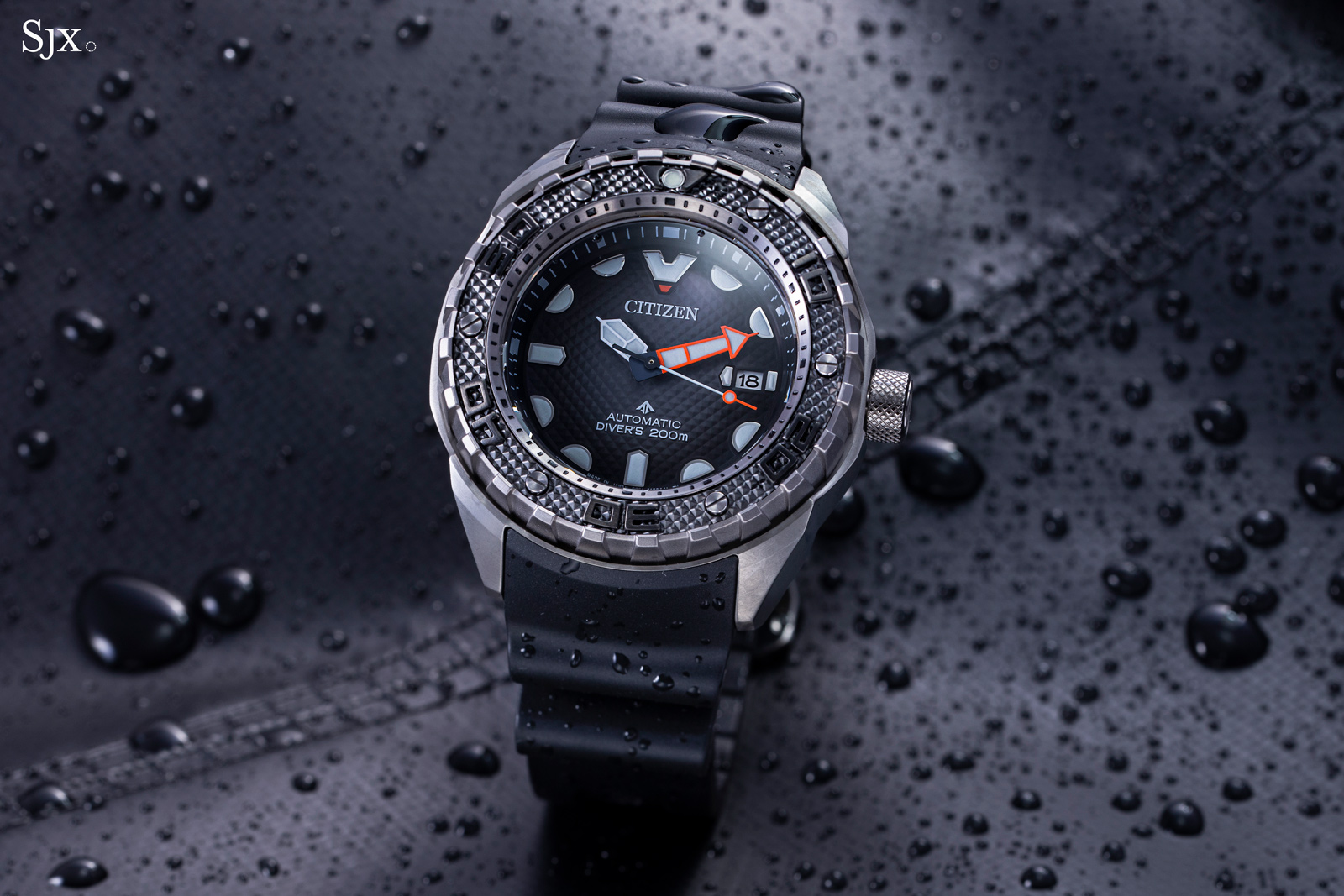 Historically best known for ultra-advanced quartz and solar-powered watches – including the most accurate watch ever – Citizen has been on a tear recently with good, old-fashioned mechanical watches.

The Japanese watchmaker started the year the high-end with The Citizen Caliber 0200, and then moved onto something more accessible but still sporting an integrated bracelet.

More recently it took the covers off the Promaster Mechanical Diver 200 m ref. NB6004-08E. Oversized and aggressively styled, the new Promaster is eminently affordable – retail is about US$1,000 – but kitted out with impressive features, including a hardened case as well as a magnetism-resistant in-house movement, which makes it excellent value. (And it has a cool, glow-in-the-dark buckle.) 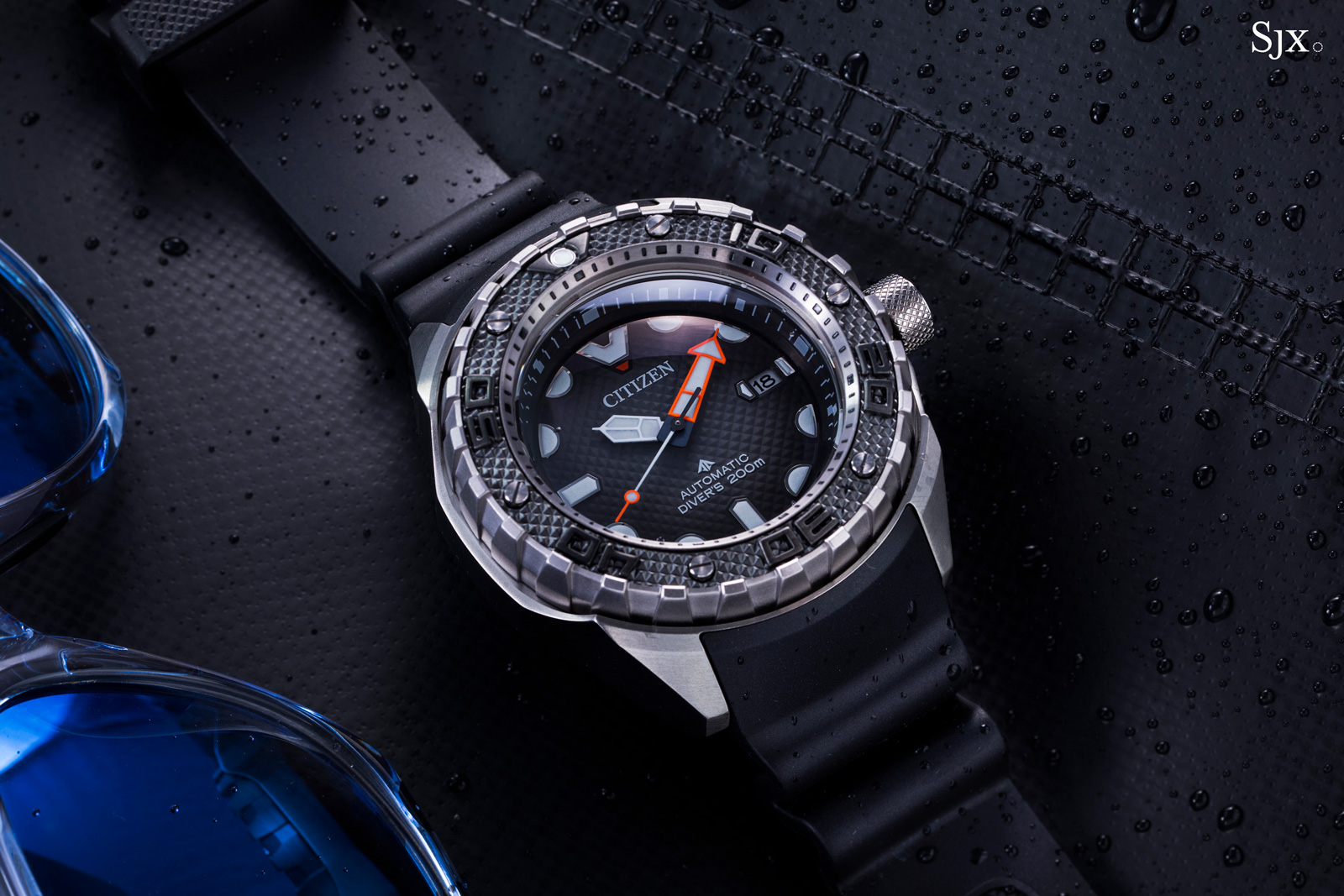 In my early days as a watch enthusiast, I had a soft spot for Seiko dive watches, because they were diverse in style and budget friendly. Citizen, on the other hand, didn’t feature as much, because it only offered one or two notable mechanical dive watches as the company largely focused on solar-powered watches (and still does).

But Citizen is expanding its repertoire at a measured pace, but making tremendous progress. The Promaster Mechanical Diver 200 m is a single model, but offered in several variants (though availability of each version varies throughout the world). Citizen lent me the base model – brushed titanium with a black dial – for a few days. 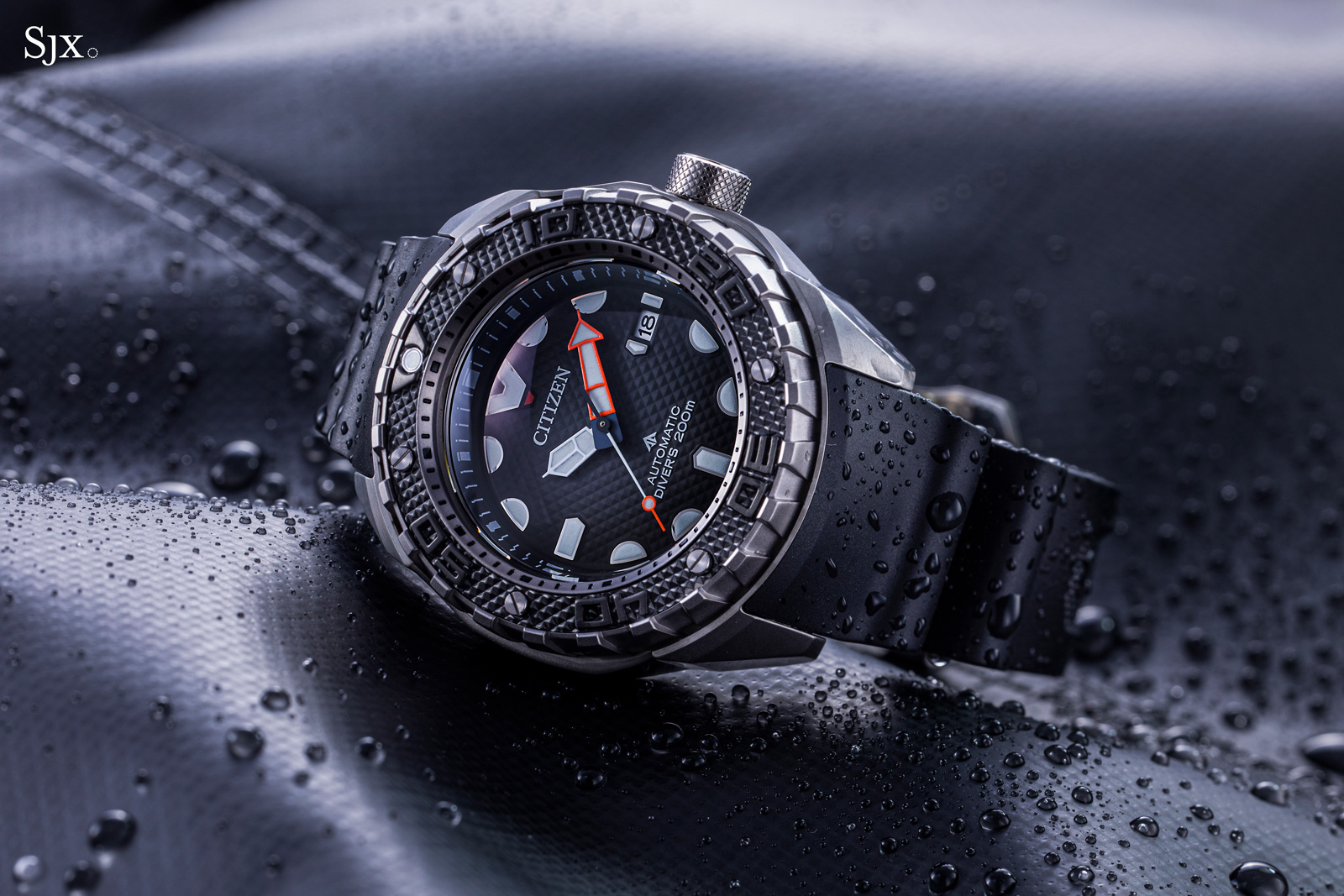 On paper, the watch is high spec – unexpectedly so given the price. The case and bezel are hardened thanks to Citizen’s proprietary metal treatment, while the movement inside is a new calibre boasting higher-than-average resistance to magnetism. And in real life, it lives up to expectations.

Design-wise, it works. Dive watches tend to converge on each other in terms of design, but the new Promaster manages to stand out. The design is excessive enough that it feels like the designers were having a bit of fun, which adds to the appeal. 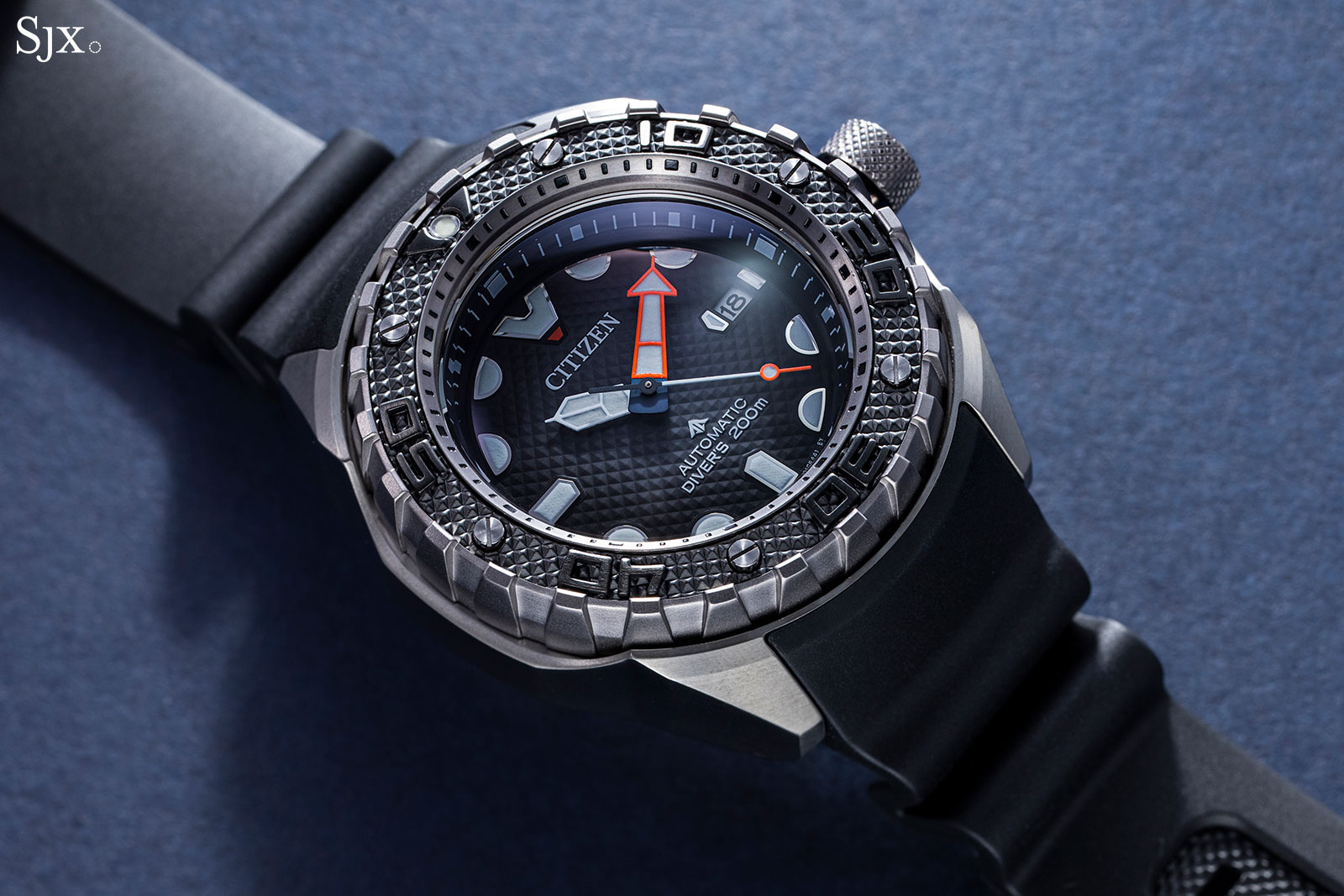 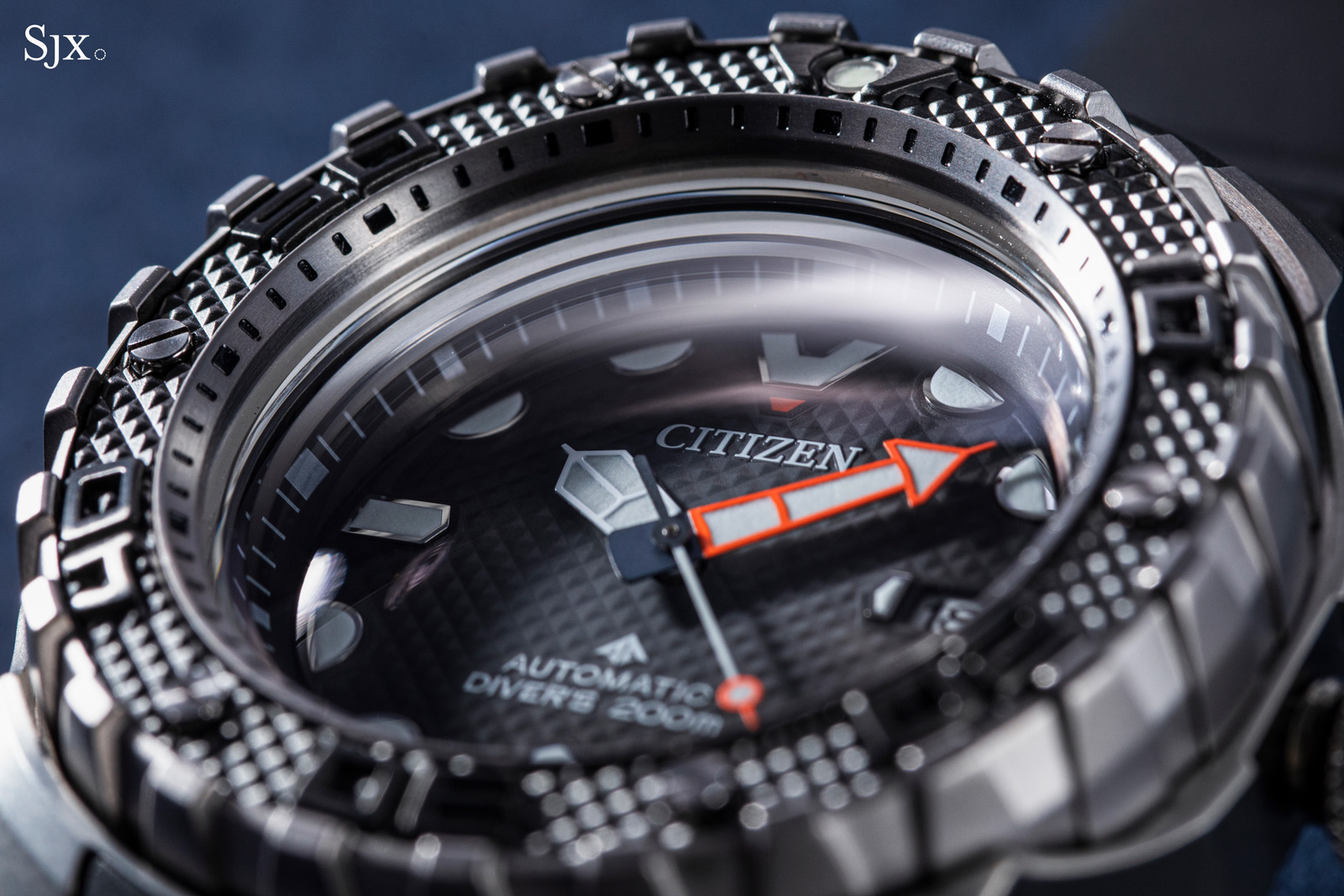 Functionally, it works just as well well, which isn’t surprising since Citizen has been making no-fuss dive watches for decades.

While large, it’s lightweight and clings well to the wrist thanks to the shape of the strap and lugs. Legibility is good, day or night, though I wish the hands were a bit longer.

On the subject of nighttime readability – the logo on the buckle is filled with lume, so it glows in the dark. Though useless, it’s a cool, amusing feature that I appreciate. 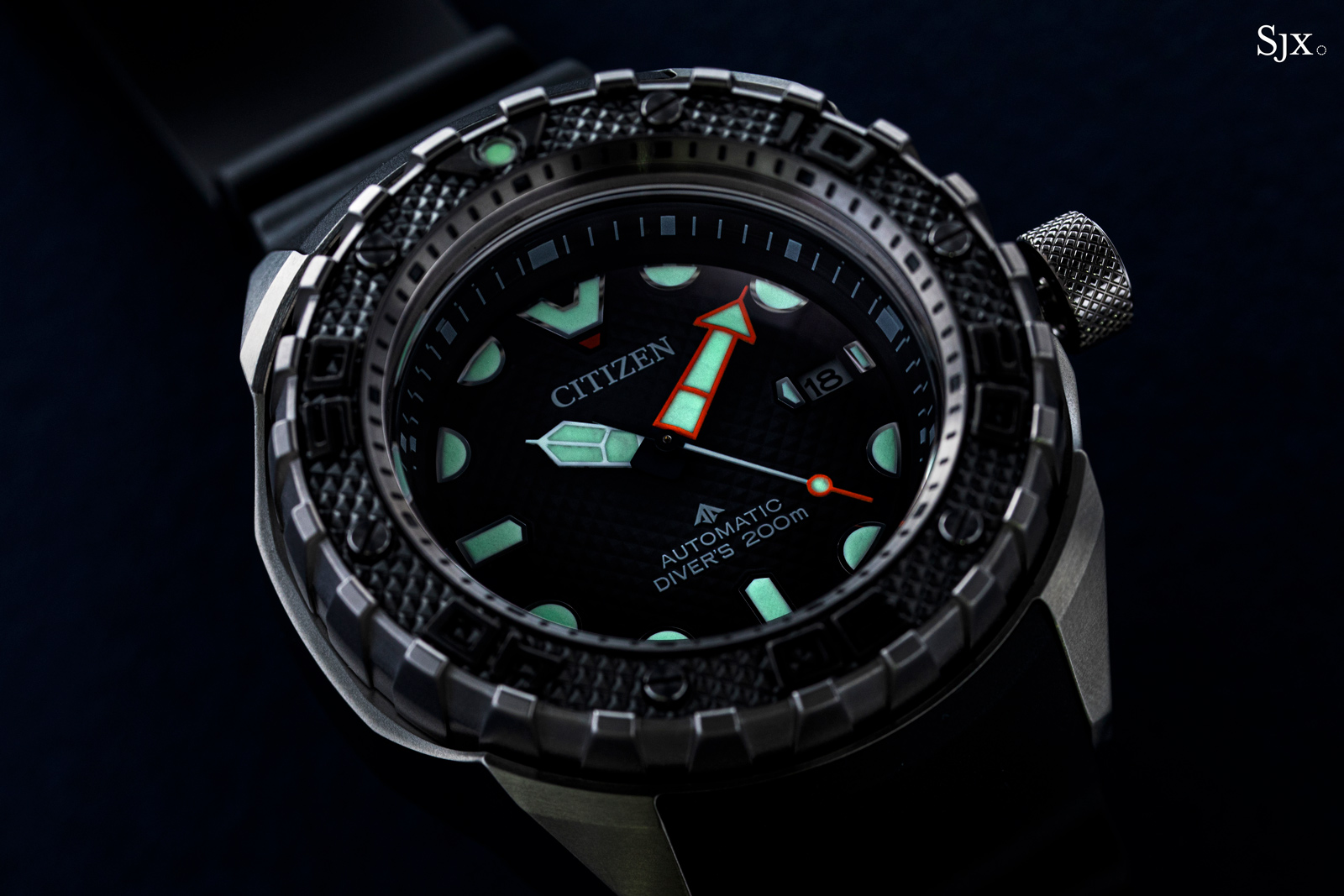 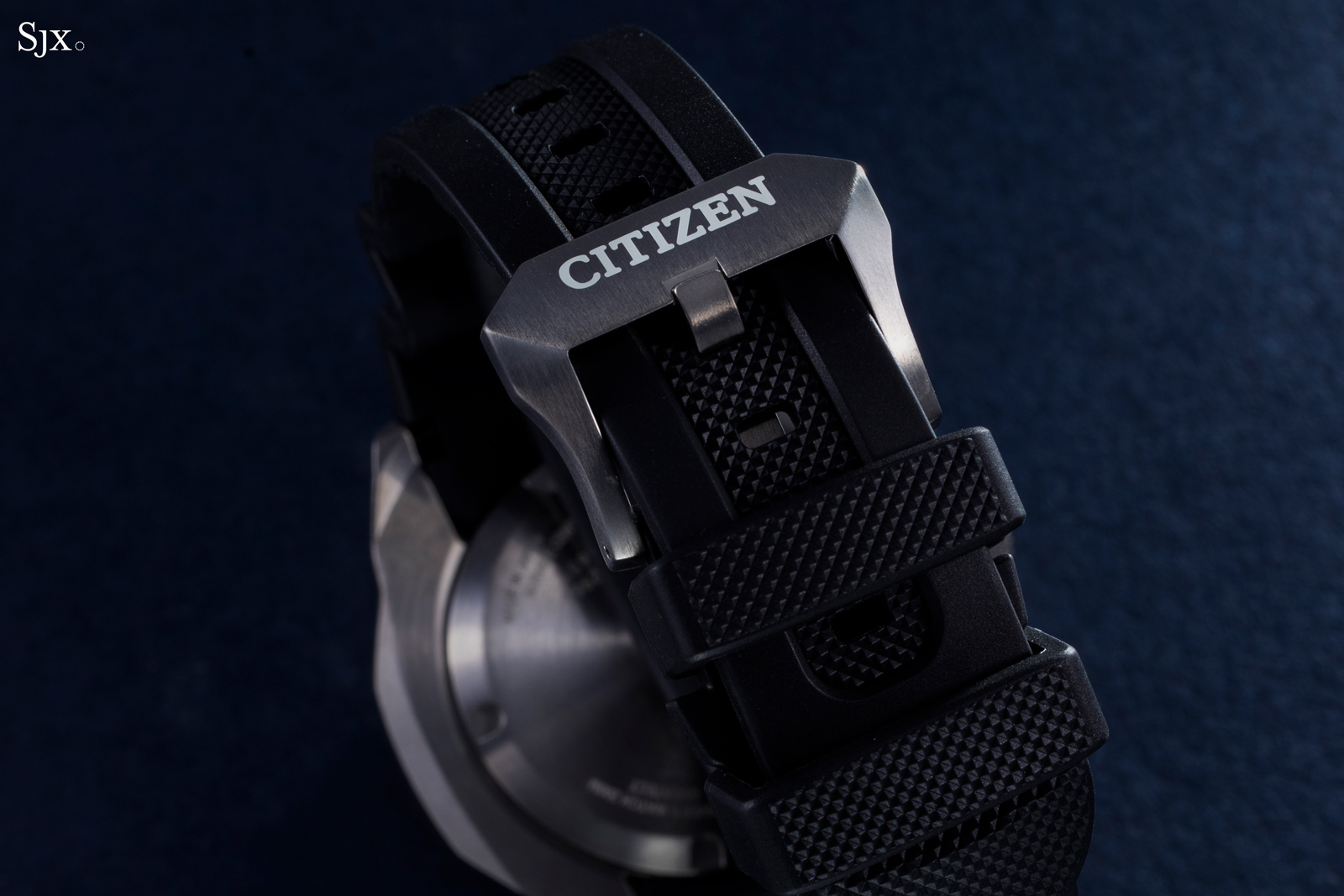 And it is a big watch, as it has to be given the design. Wide and chunky, the case actually seems thicker than it actually is due to its proportions. That contributes positively to the aesthetic, which certainly isn’t for the shy.

Though it’s enormous, the new Promaster does well in its details. The watch is executed well, right down to elements like the hobnail bezel insert. The degree of detail is notably good, especially for a watch that costs about US$1,000.

Overall, the new Promaster is a standout in both design and materials, making it one of the strongest value propositions in its price segment. 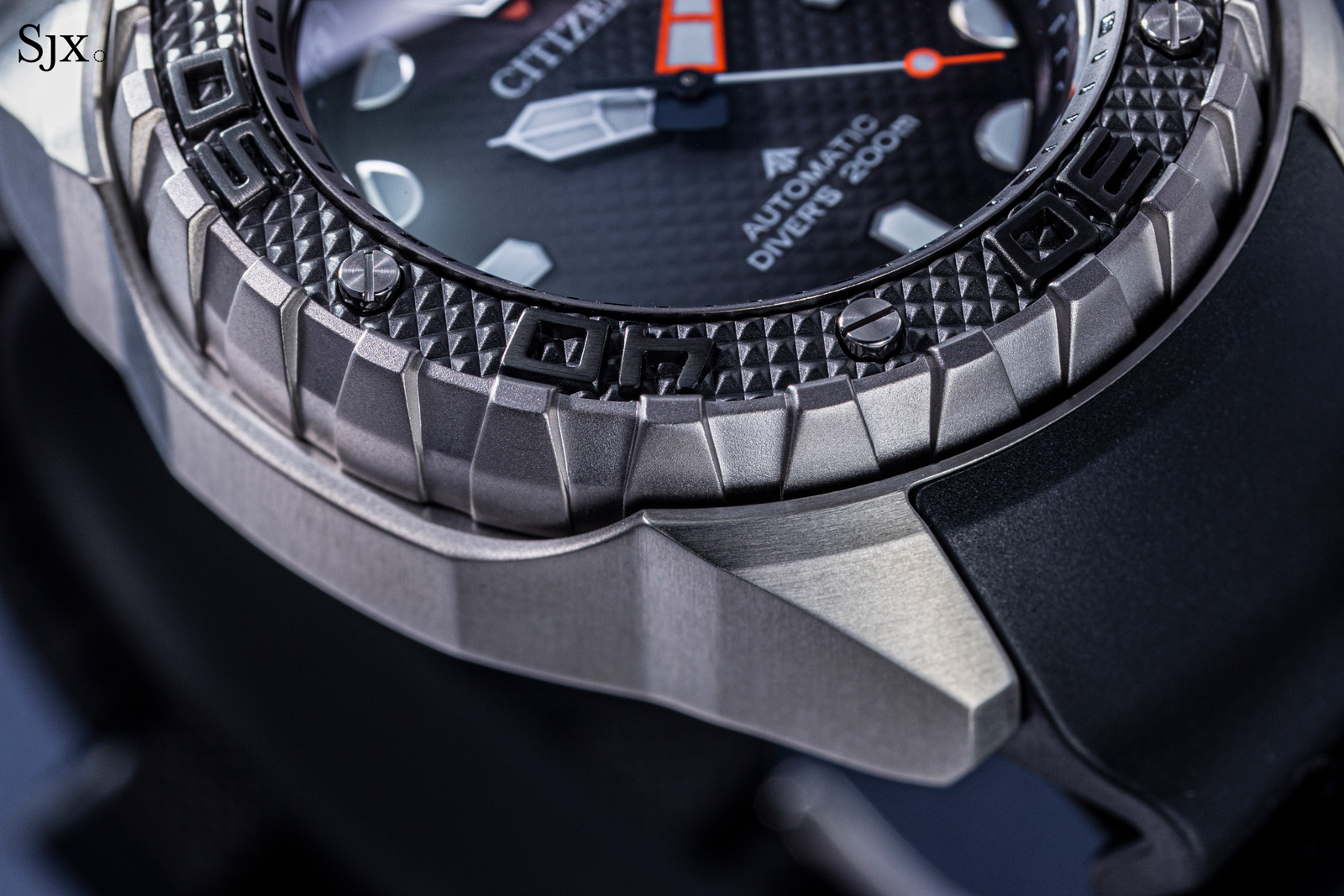 The face of the watch is defined by its bezel and dial – both hobnail textured – and a heavily domed crystal.

Both tall and wide, the bezel makes the watch. Resembling a turret with a crenellated wall, it has a titanium insert with a stamped hobnail pattern that’s secured with visible screws – a techno-industrial look that brings to mind sci-fi movies like Alien. 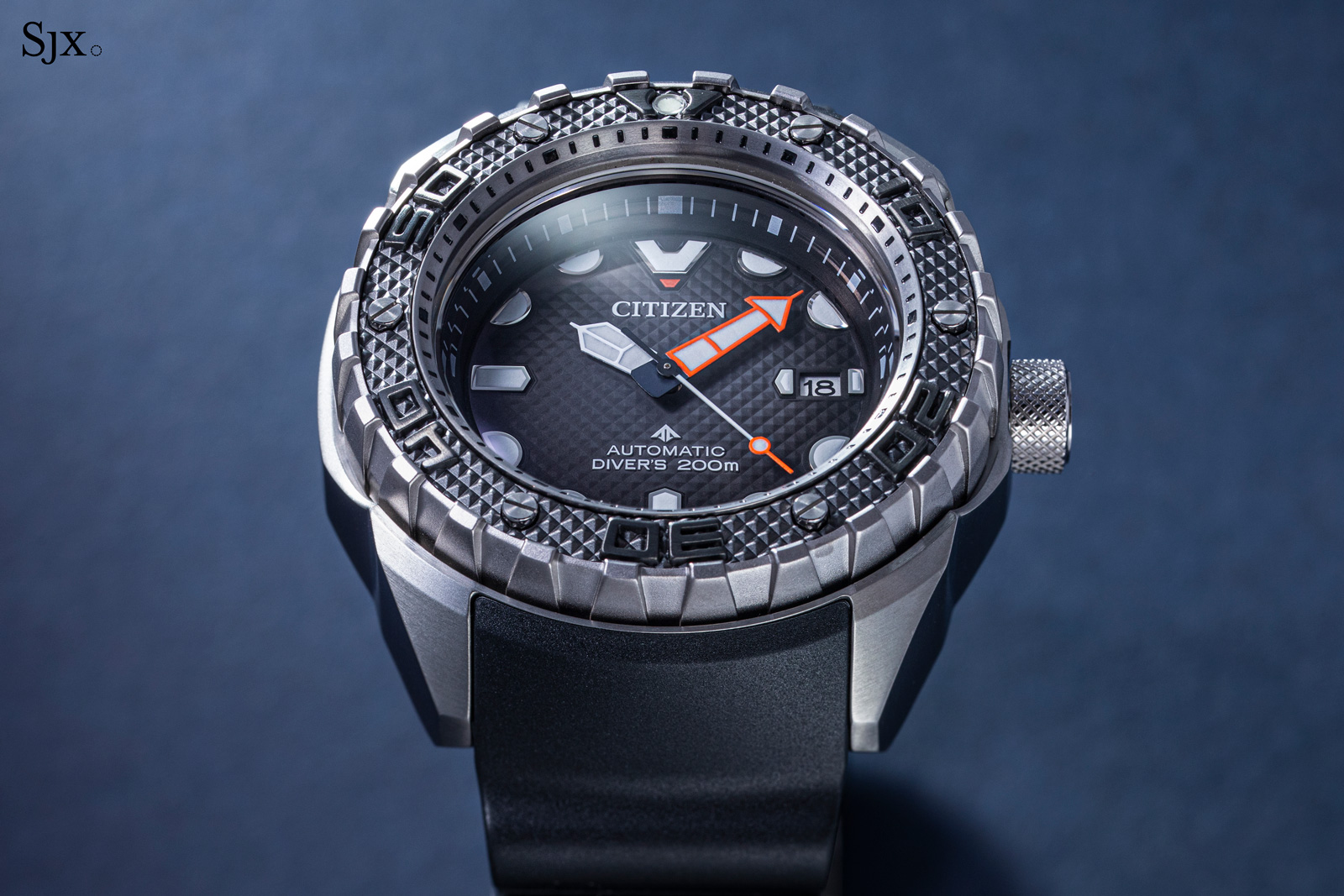 While not instantly apparent, the bezel is actually two tone – a medium-grey bezel with a dark-grey insert. The colour difference is more than just aesthetics. Each part of the case is treated with a variant of Citizen’s proprietary process that hardens the metal’s surface. The case is treated with Duratect MRK, the bezel with Duratect TIC, and the dark-grey bezel insert, Duratect DLC.

As a testament to the surprising degree of attention to detail in the Promaster diver, despite its affordability, the differing treatments are down to a matter of functionality and wear-resistance.

A proprietary surface hardening process, the Duratect MRK treatment for the case is similar to the Tegiment process that German watchmaker Sinn uses widely for its tool watches. The treatment starts with the component placed in a vacuum chamber that’s sealed and then heated to several hundred degrees. The hot chamber is then saturated with a mix of gases, causing certain molecules to bond with the surface of titanium, increasing its hardness, allowing the case to retain its factory finish despite wear and tear.

The bezel treated with Duratect TIC, a coating of titanium carbide that increases the wear-resistance of the bezel without compromising its functionality. Unlike the case, the bezel requires a minimum degree of pliability so that it can rotate without breaking its internal spring, which rules out a surface hardening treatment.

Similarly, the bezel insert is treated with Duratect DLC, short for diamond-like carbon. This gives it a darker, slightly glossy finish, while also improving its scratch resistance. Though the bezel is stamped, the hobnail pattern and relief portions are tidily refined, with only minor softness of the edges visible up close. The screws that secure the insert are notable for being particularly refined – they have gently chamfered outer edges. 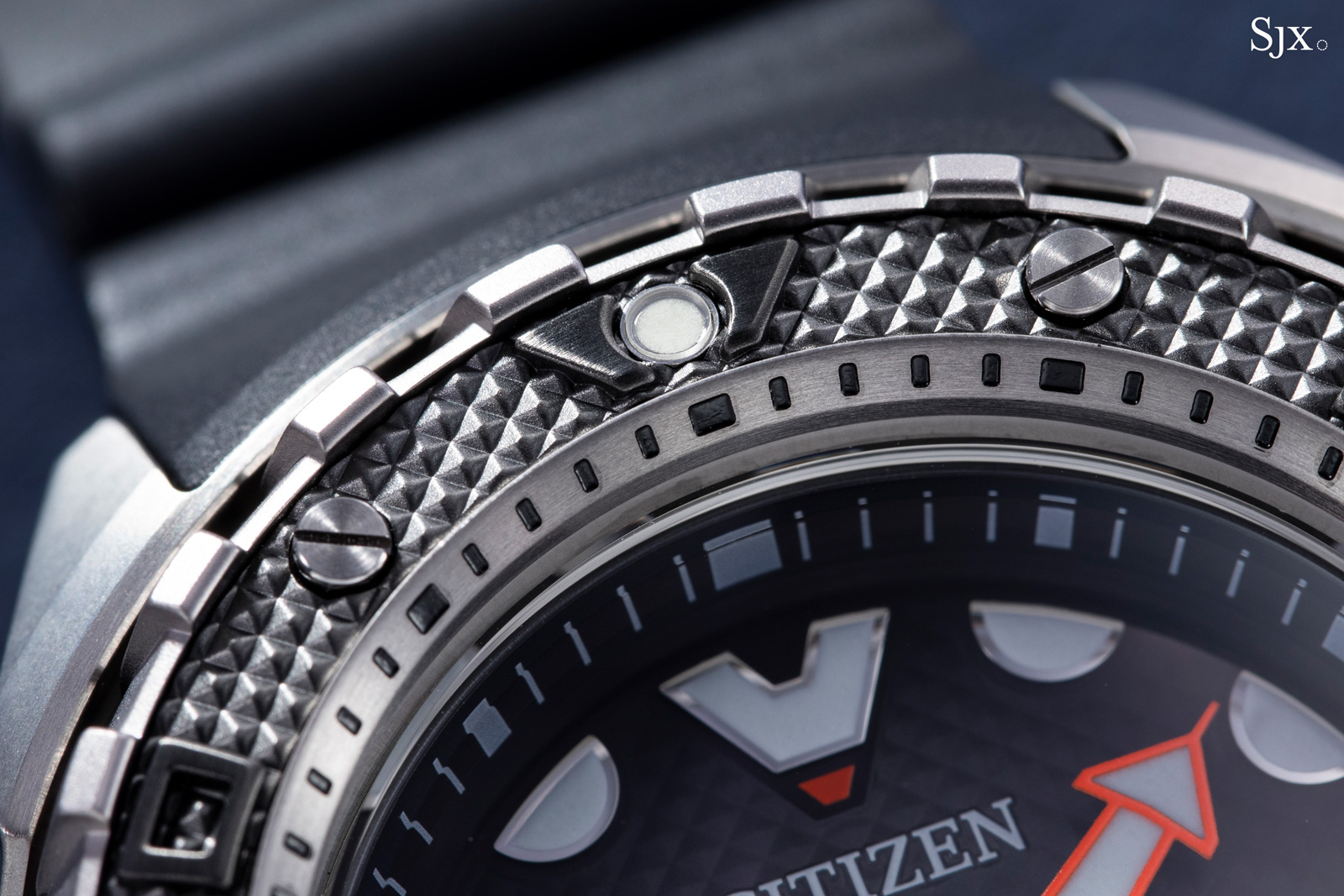 The only downside of the bezel is its tactile feel. It rotates with a click that’s audible, but not crisp enough to be satisfying.

Within the bezel is the thick, domed sapphire crystal. Its curve is pronounced, so much so that it appears spherical from an angle. The crystal’s curve creates an slight distortion of the edge of the dial, an attractive effect that brings to mind high-end deep-sea dive watches. With a hobnail surface, the dial echoes the bezel. One of its best features is also the least obvious: the dial has a smoked finish, leaving it a medium grey in the centre and black at the edges. This complements the grey and black palette of the case perfectly. 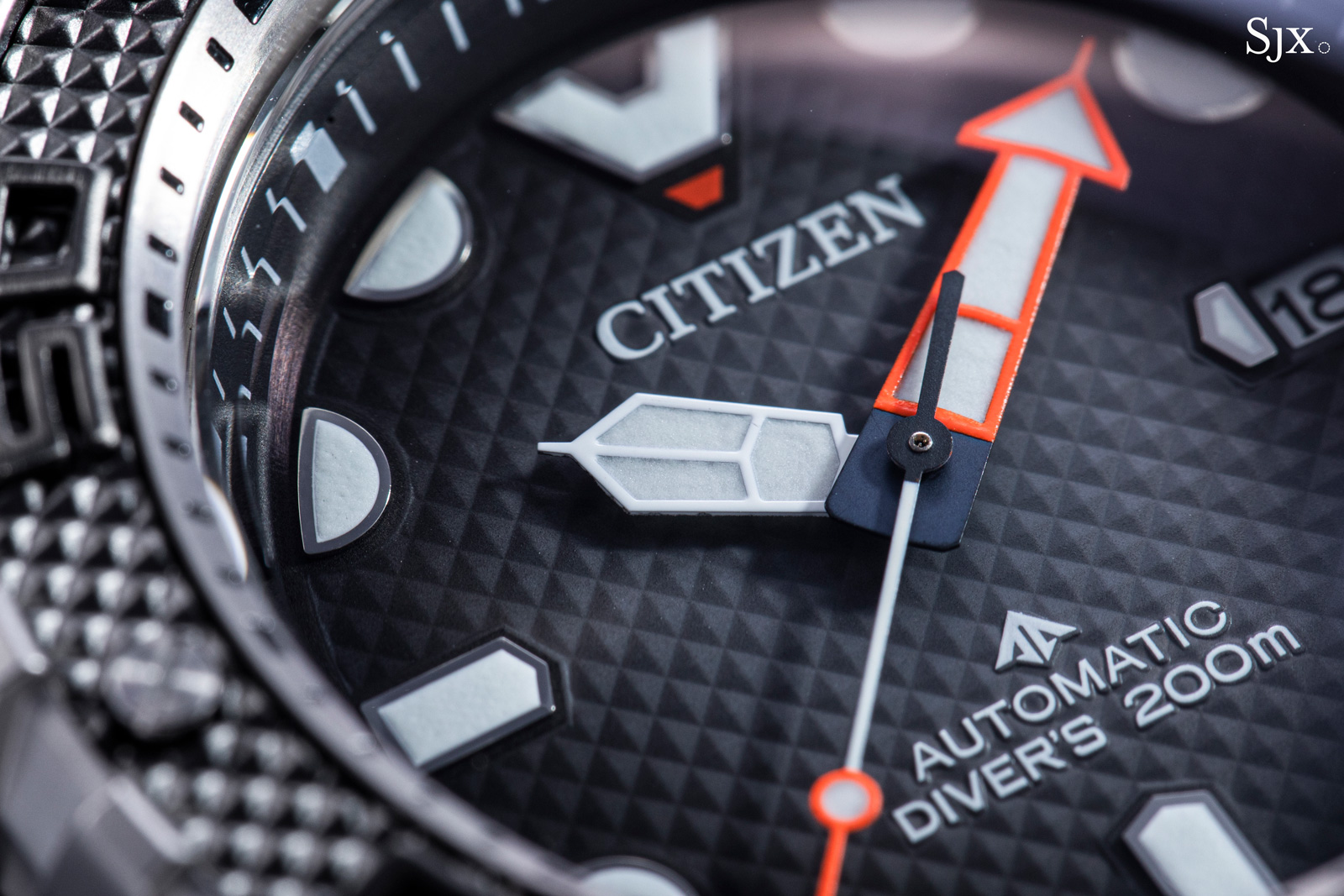 The elements that make up the dial don’t quite have the same sharp, defined edges found on the bezel, but they are more than good enough, particularly with the price in mind.

Most of the dial appears stamped, including the logo and markings above six o’clock (they are then printed with white letters). The hour markers appear to be applied into recesses, so they don’t rise much above the dial surface. 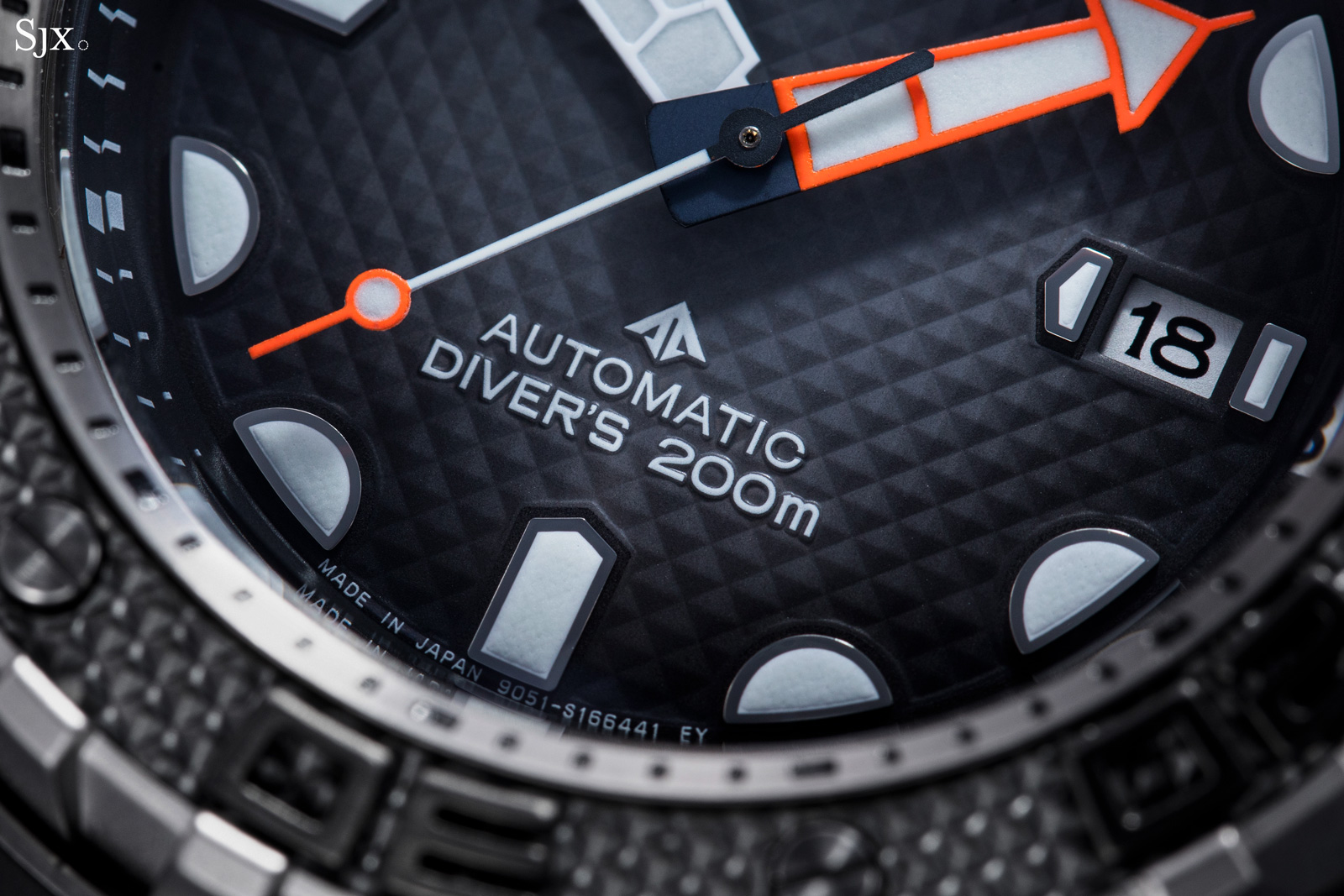 The dial design is typical dive watch, with a strong differentiation between the hands, as well as between the quarters and other hour markers. Everything is also generously lumed, which makes legibility is great all around.

That said, the hands feel a bit short. I wish both were slightly longer, such that the minute hand edges closer to the edge of the dial, while the hour hand brushes against the bottom of the 12 o’clock marker. The date window isn’t strictly necessary, but fortunately it isn’t too obtrusive. It sits nicely within the three o’clock marker, preserving the symmetry of the dial. But the date disc is in white – a bit of a let-down. A disc in grey with white numerals would have matched the dial better. 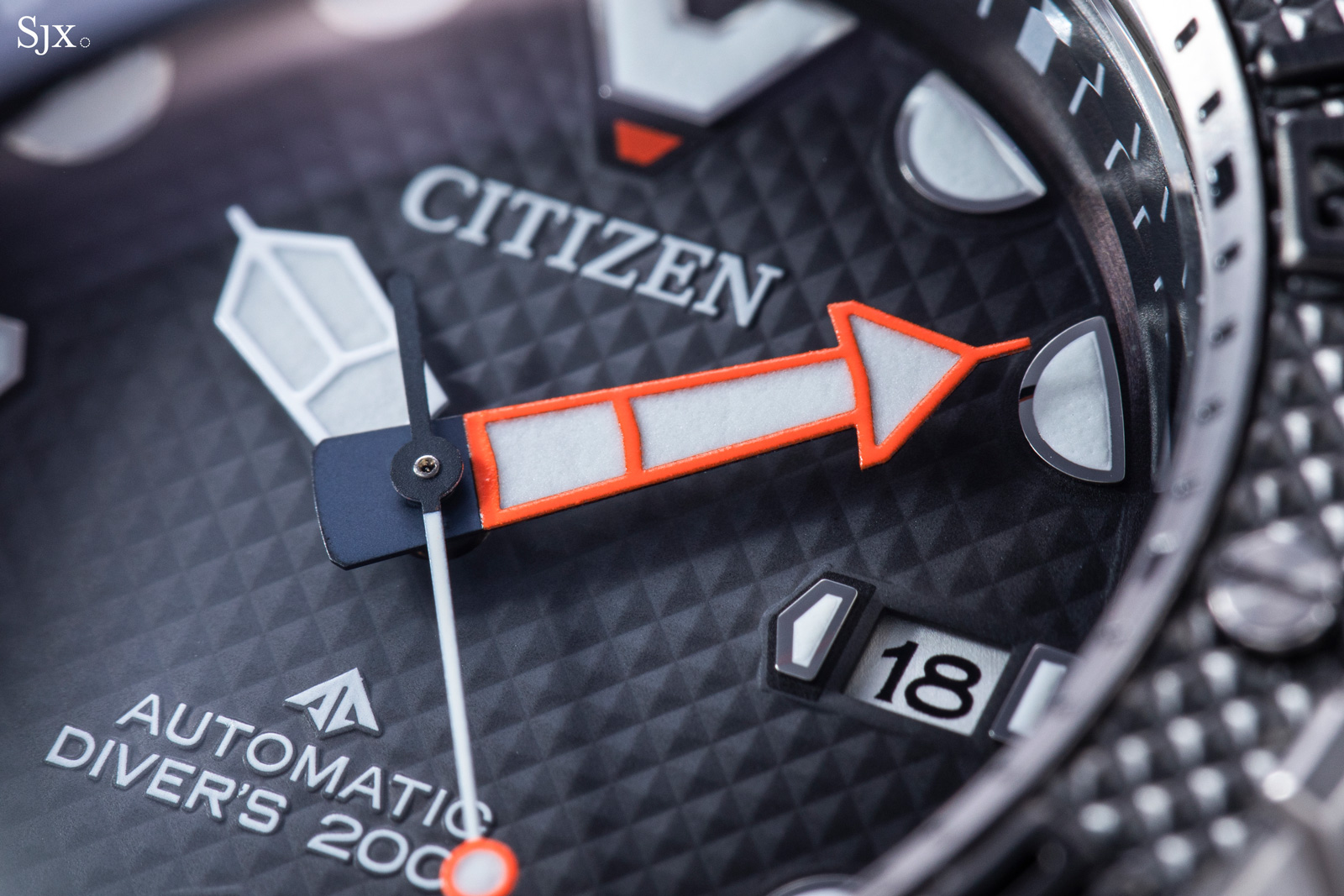 Like the bezel, the case is treated with Duratect, making it harder than the typical titanium and steel alloys used for watches. My experience with other Citizen watches with Duratect cases confirms that the treated metal is indeed more wear resistant.

All the case elements are tidily finished, with a fine surface texture that’s consistent. Though the case and bezel are likely stamped – hence the slightly rounded edges up close – they still look good. The case is massive but its light weight and design makes it comfortable on the wrist. It’s 46 mm wide and matched by a suitably large knurled crown.

In profile the case seems equally large. In reality, it is not that thick. At a bit over 15 mm high, the case is comparable in thickness to other dive watches (like the Rolex Sea-Dweller), but its proportions and unusually tall bezel make it seem thicker than it is. Despite the diameter, its lugs are surprisingly short. Compared to the size of the case, the lugs are barely there. Add to that an integrated rubber strap that arches downwards at a sharp angle, and the result is a wearable watch.

That, however, brings with it a downside: switching to aftermarket straps might not be possible due to the close fit of the strap to the case. I didn’t remove the strap since the watch was a loaner, but I think it would work well on a fabric strap. The cal. 9051 is a newish calibre that’s becoming the workhorse movement for Citizen’s premium offerings in the affordable segment. It’s also found in the Series 8 launched in March.

Though hidden behind a solid back, the movement is no doubt a solid, clean industrial calibre that is exceptionally robust. Descended from the 90 series family of movements (which is in turn related to Miyota’s range of slim, automatic calibres), the cal. 9051 is fairly thin at 4.1 mm high (thinner than an ETA 2824 but a bit taller than the ETA 2892). It has specs comparable to movements found in other watches at this price point, namely a 42-hour power reserve and a rating of within -10 to +20 seconds a day.

What sets it apart is its magnetism resistance, which isn’t much useful underwater but practical for a desk diver whose wrist is exposed to everyday electronics. The cal. 9051 meets the Japan Industrial Standards requirement for a “magnetic-resistant portable watch”, specifically the highest-spec Type 2 laid out in JIS B 7024, which dictates magnetism resistance of at least 16,000 A/m. That’s sufficient to withstand the magnetic fields generated by devices like smartphones and tablets, and about three times the norm for mechanical watches of 4,800 A/m.

Citizen doesn’t reveal much about how the magnetism resistance is achieved, except to say that non-magnetic alloys are used for the balance spring and surrounding components – an unusually major upgrade for a relatively inexpensive watch.

With its case treatments and build quality, the Promaster Mechanical Diver 200 m is an accomplished watch (and certainly worthy of a more imaginative name). It does exactly what it sets out to be – an oversized, robust diver with a recognisable style – and quite a bit more, while being strong value for money. Citizen is on the right track with mechanical watches like this.

Availability: Now at Citizen boutiques and retailers
Price: US$1,050 on strap

Correction August 19, 2021: Edited and expanded the section on Duratect treatments to clarify the specific form of treatment for each component, as well as the nature of the Duratect process.

Correction August 23, 2021: The Duratect treatments are distinct process, being either a coating or surface hardening, and are not variants of the same process as implied in an earlier version of the article.