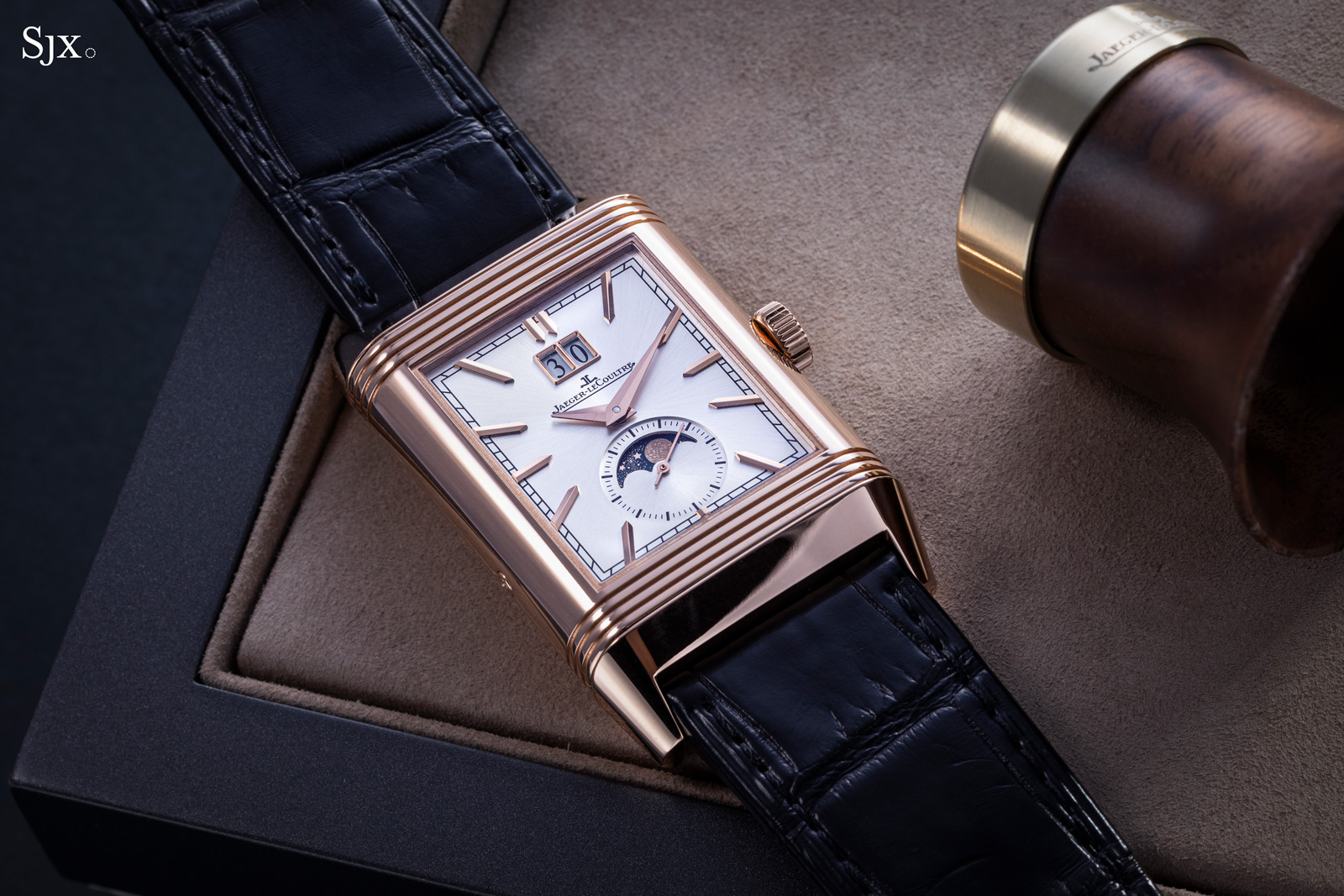 While the Reverso was conceived as a sports watch – it flipped over to protect the crystal – the swivelling case makes more sense today as a double-faced complication (or a canvas for miniature painting). And that’s precisely what Jaeger-LeCoultre (JLC) has done with a variety of models, ranging from the twin-time zone Duoface to the Hybris Mechanica Calibre 185 Quadriptyque with four faces.

The Quadriptyque is the flagship model for the Reverso’s 90th anniversary, with 11 complications and a price tag north of US$1.6 million. Also created for the anniversary, but more affordable – relatively speaking – is the Reverso Tribute Nonantième that shows a single time on two faces, a conventional one on the front, and a charming secondary display on the back. 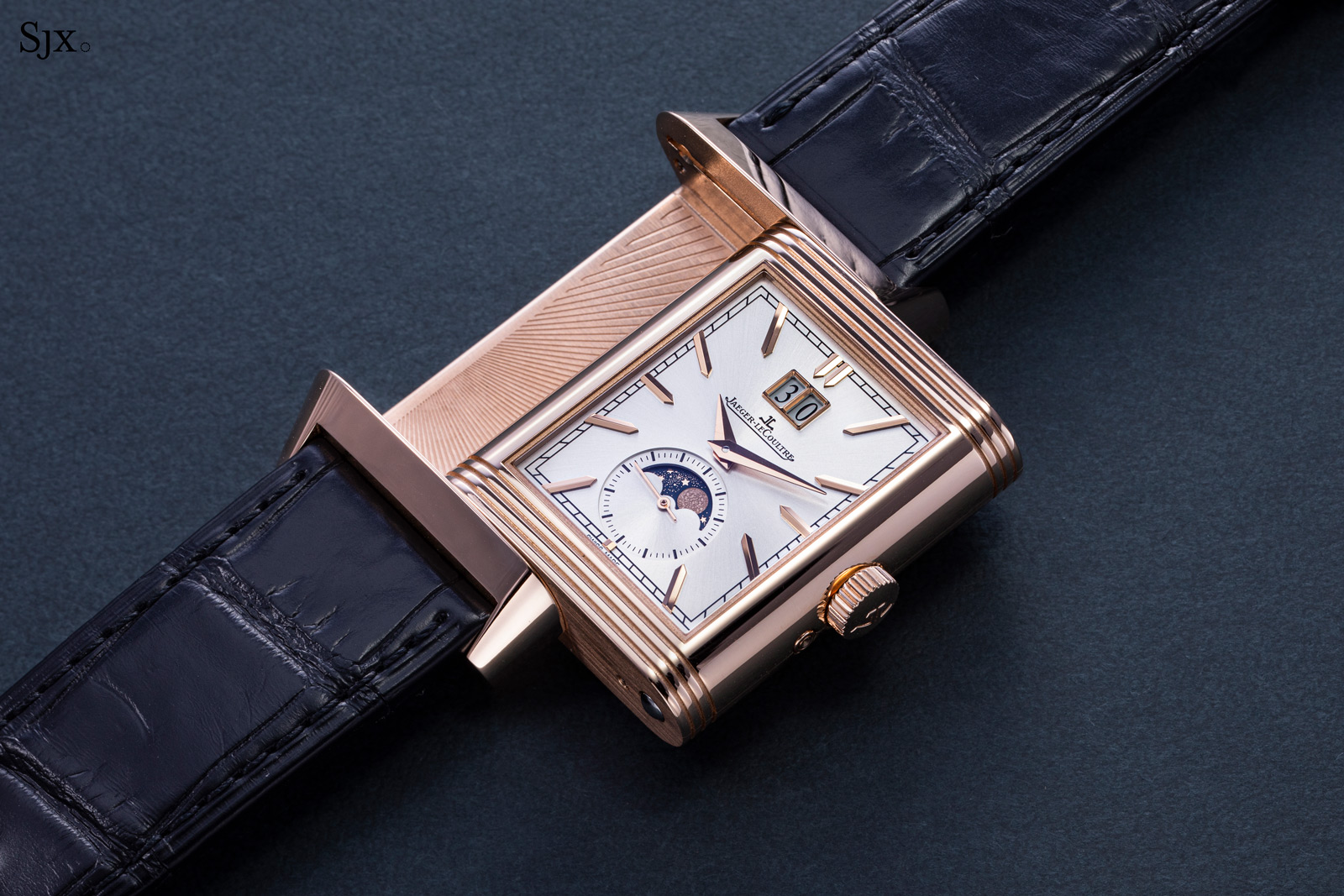 With a case that’s among the largest of Reversos, the Nonantième is a big watch. Pick it up and the size is immediately apparent; it would be considerably more elegant if smaller.

It feels like a chunky, complicated watch. In fact, it’s almost as large as the Quadriptyque in diameter and length, despite being far simpler. 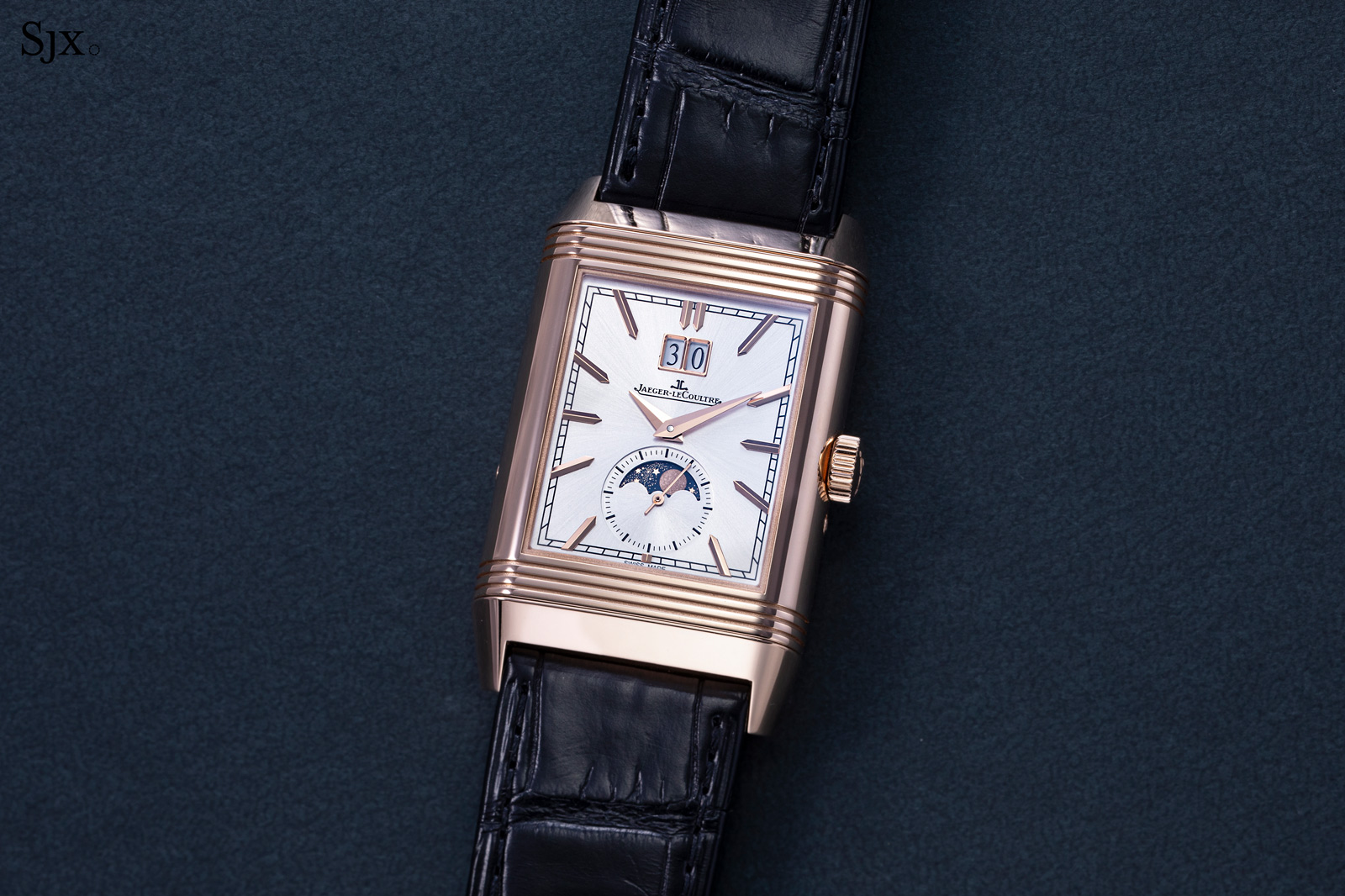 On the front it’s typical of current Reverso design. All of the elements on the dial are classical and work together well. The only piece of the front that stands out is the moon phase display, which has a textured moon that gives the dial a little life. 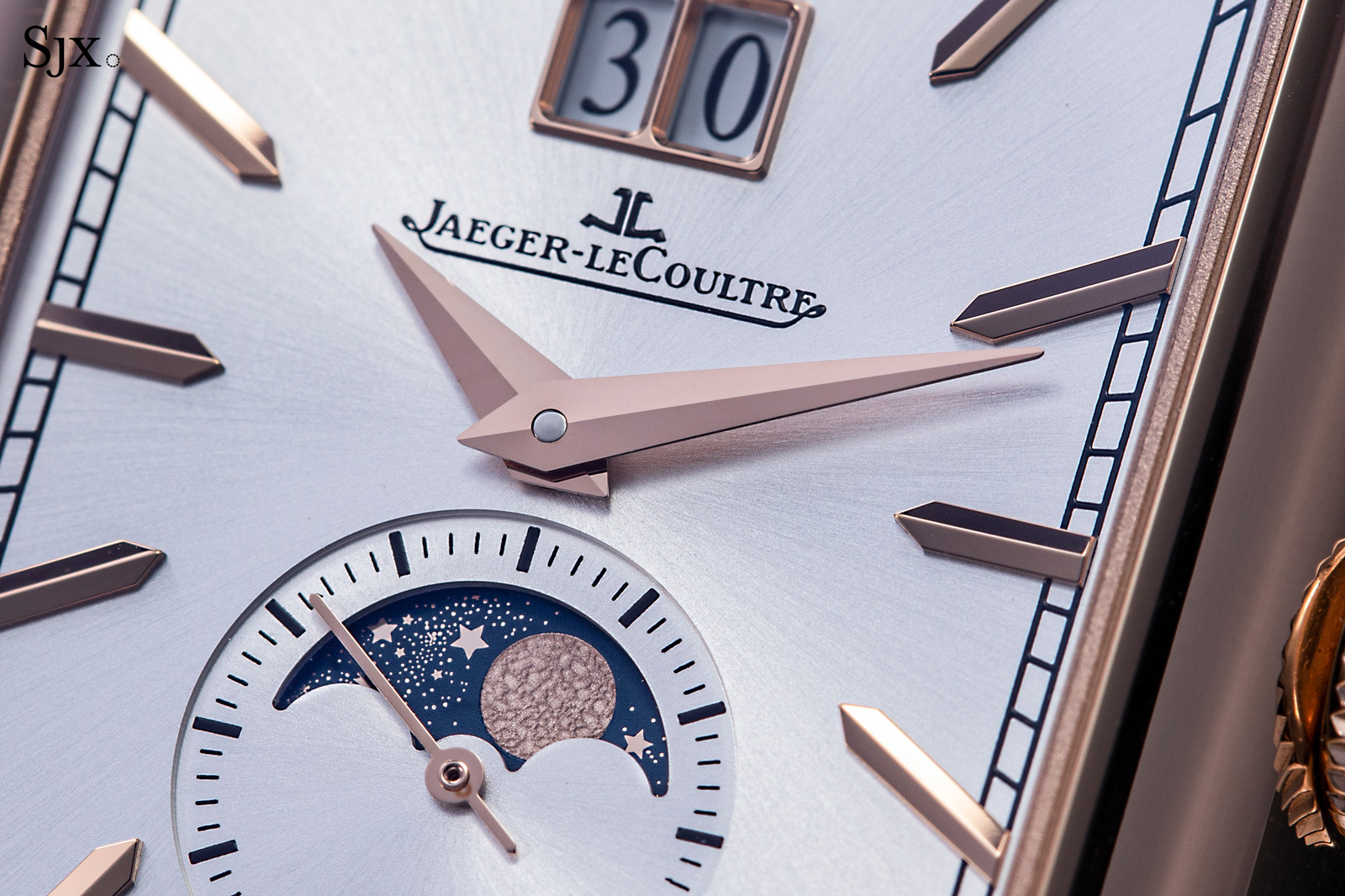 Its better side is the reverse, which shows hours and minutes in a manner that’s decidedly special for a Reverso. In fact, the digital hours and disc minutes are a first for the model. Matched with the blue-lacquered sky motif, the symmetrical display has enough Art Deco in it to be a perfect match for the Reverso design.

But the display is simpler than the fancy frontage implies: it’s a semi-jumping hour plus two rotating discs for the minutes and day-night respectively, which mirror the time shown on the front. In essence, the Nonantieme offers two ways of telling the time in one watch. 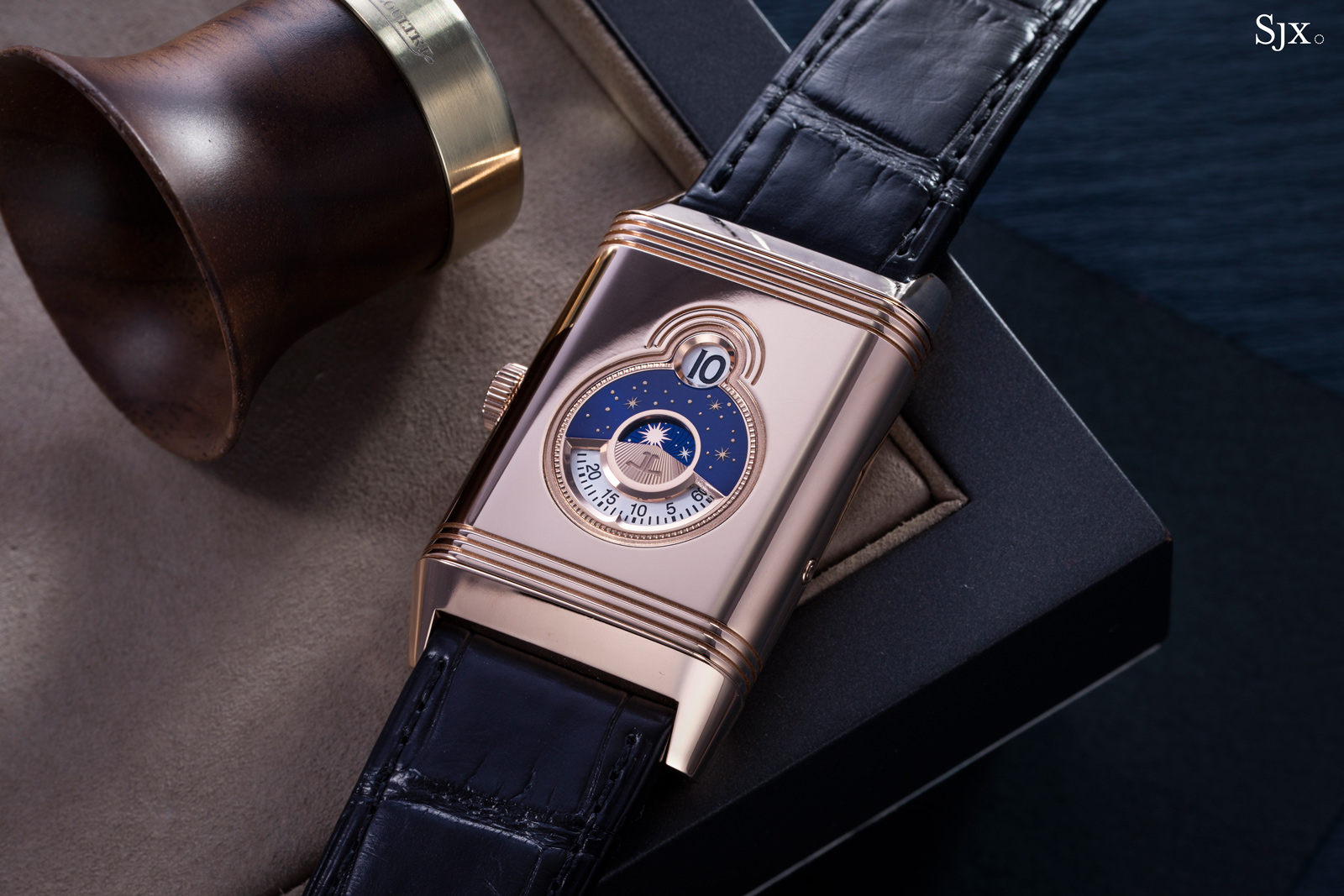 The Nonantième is an appealing watch that would be vastly enhanced in a smaller package, while the mechanics of the reverse display are a bit disappointing. With that in mind, the Nonantième is reasonable enough in terms of price – retail is US$40,500 – making passable in terms of value, but not the type of value proposition that JLC is historically known for.

For a relatively simple watch, the Nonantième is chunky. It has a big footprint on the wrist at 49.4 mm by 29.9 mm, though it’s an acceptable 11.72 mm in height.

The Quadriptyque grand complication, in contrast, measures 51.2 mm by 31 mm, and stands 15.15 mm high. The difference between the two in size is small, despite the gulf in complexity and part count of the movement. 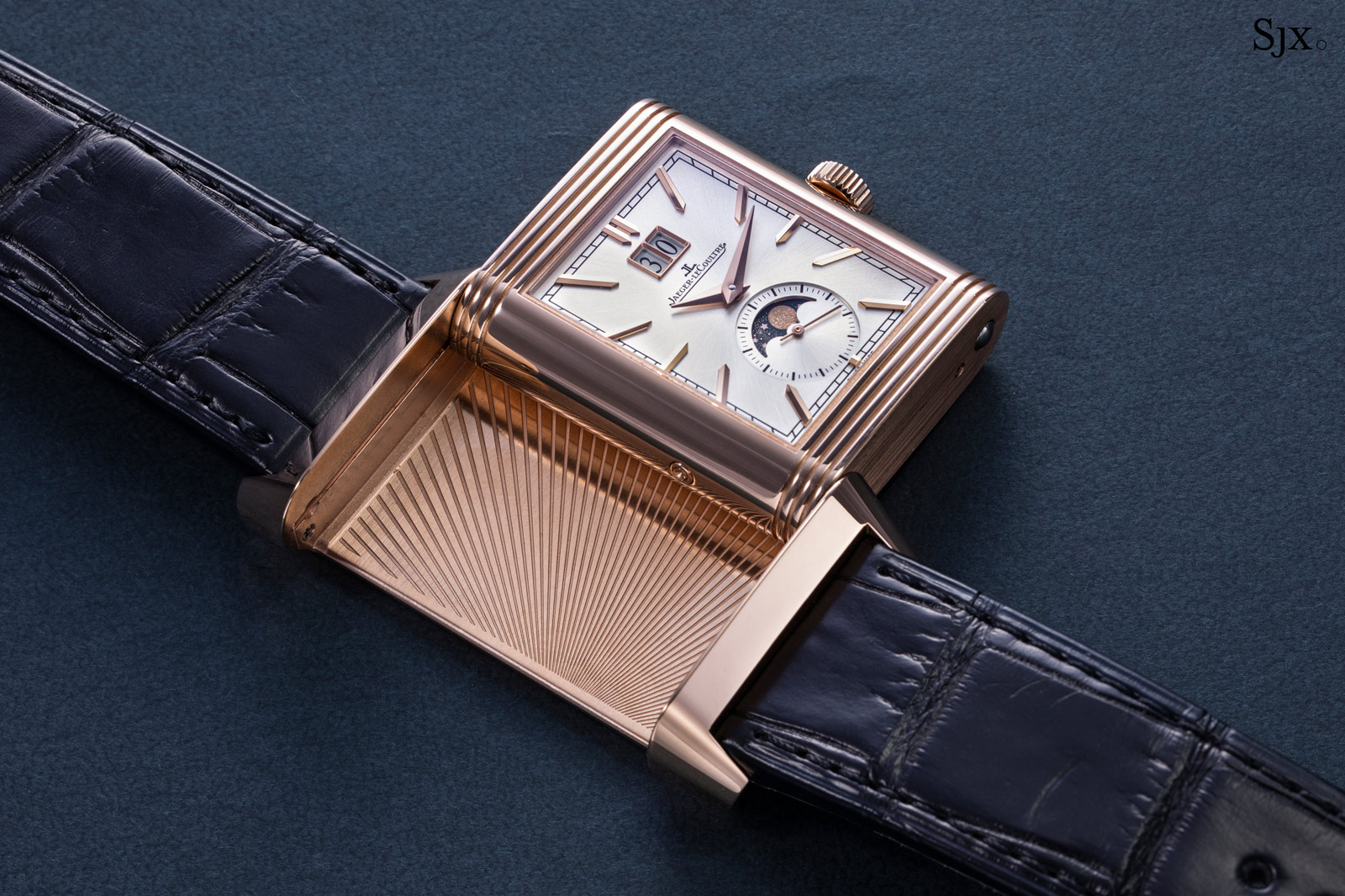 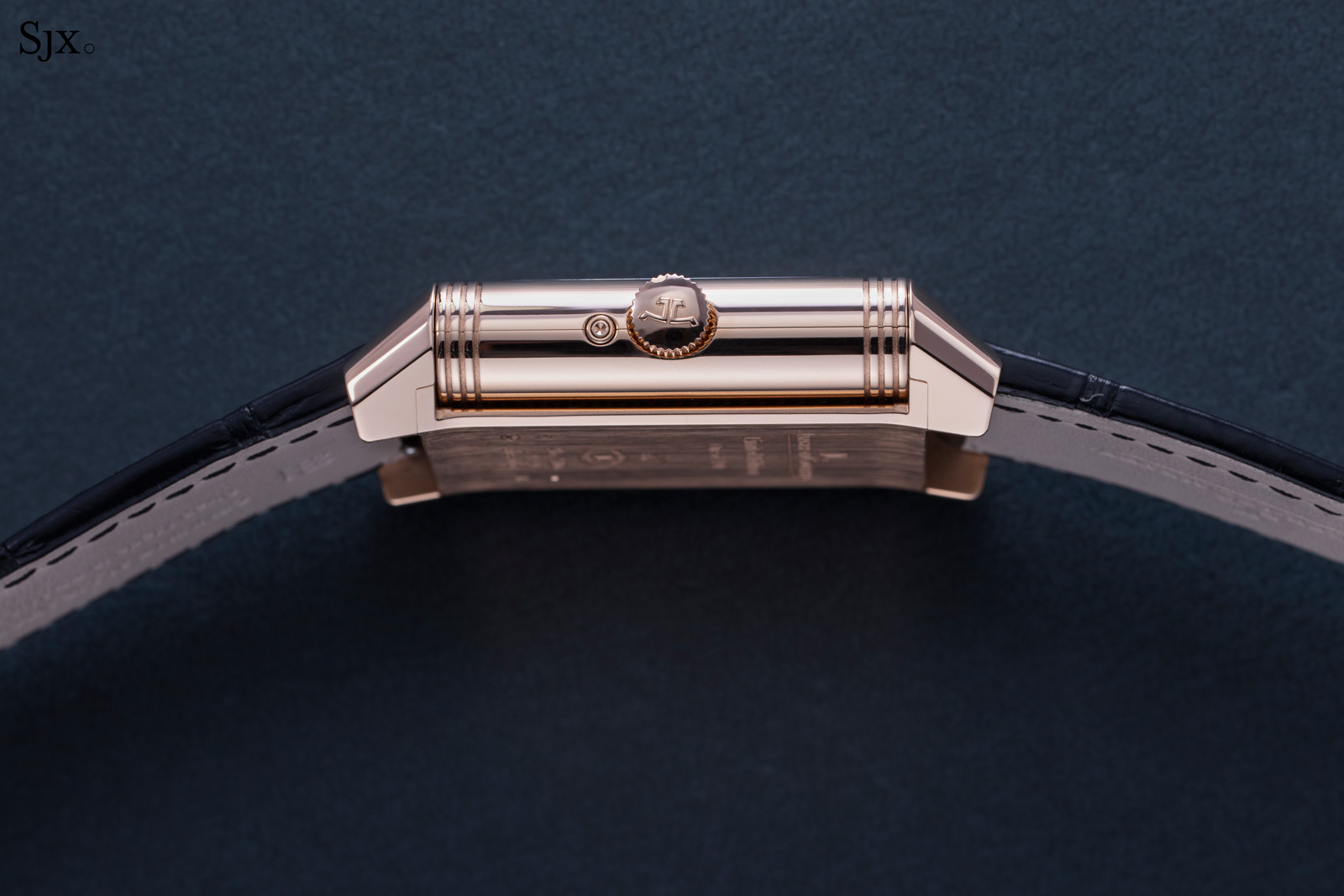 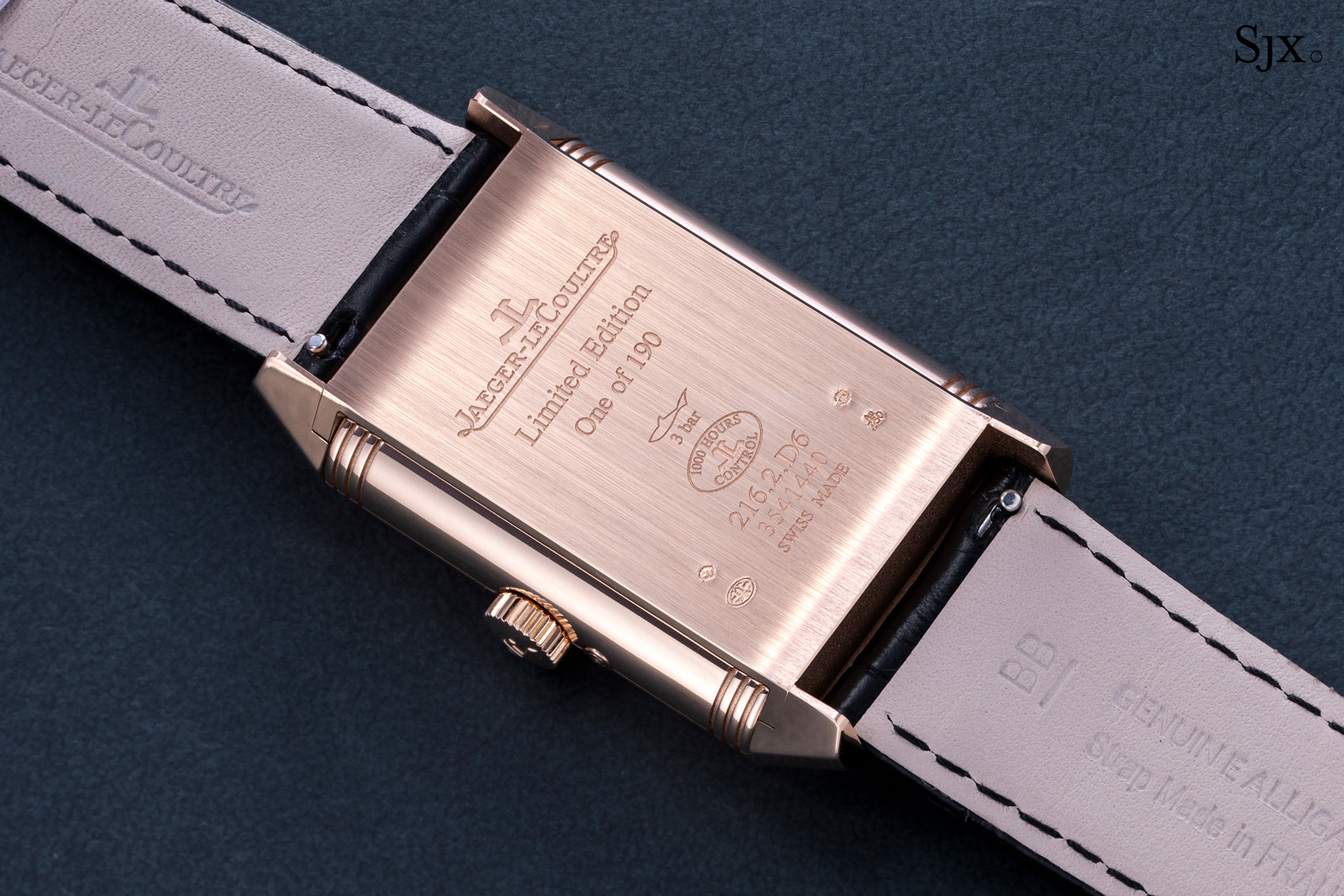 Admittedly, the size can be justified mechanically. Even though the base movement inside the Nonantième is small, the modules on both sides are wider, which is apparent from the size and position of the displays.

The date, for instance, is bigger than average and sits near the top of the dial, while the reverse indicates the hours with extra-large numerals. 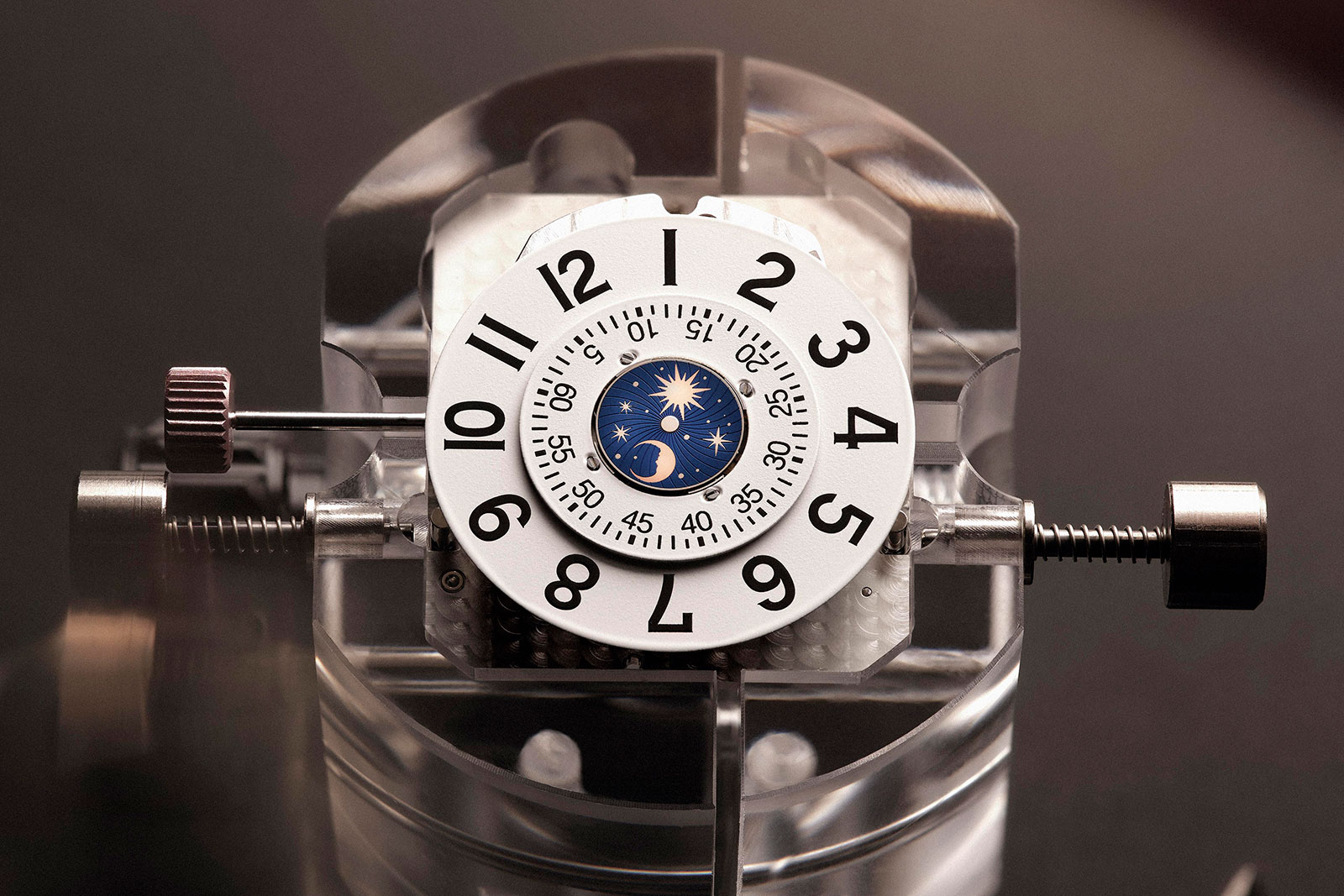 The reverse under-dial of the cal. 826, with concentric discs for the hours, minutes, and day-night indicator

But that doesn’t take away from the fact that the watch is big and looks oversized on the wrist. The form of the Reverso case also means it will be a difficult fit for many wrists. 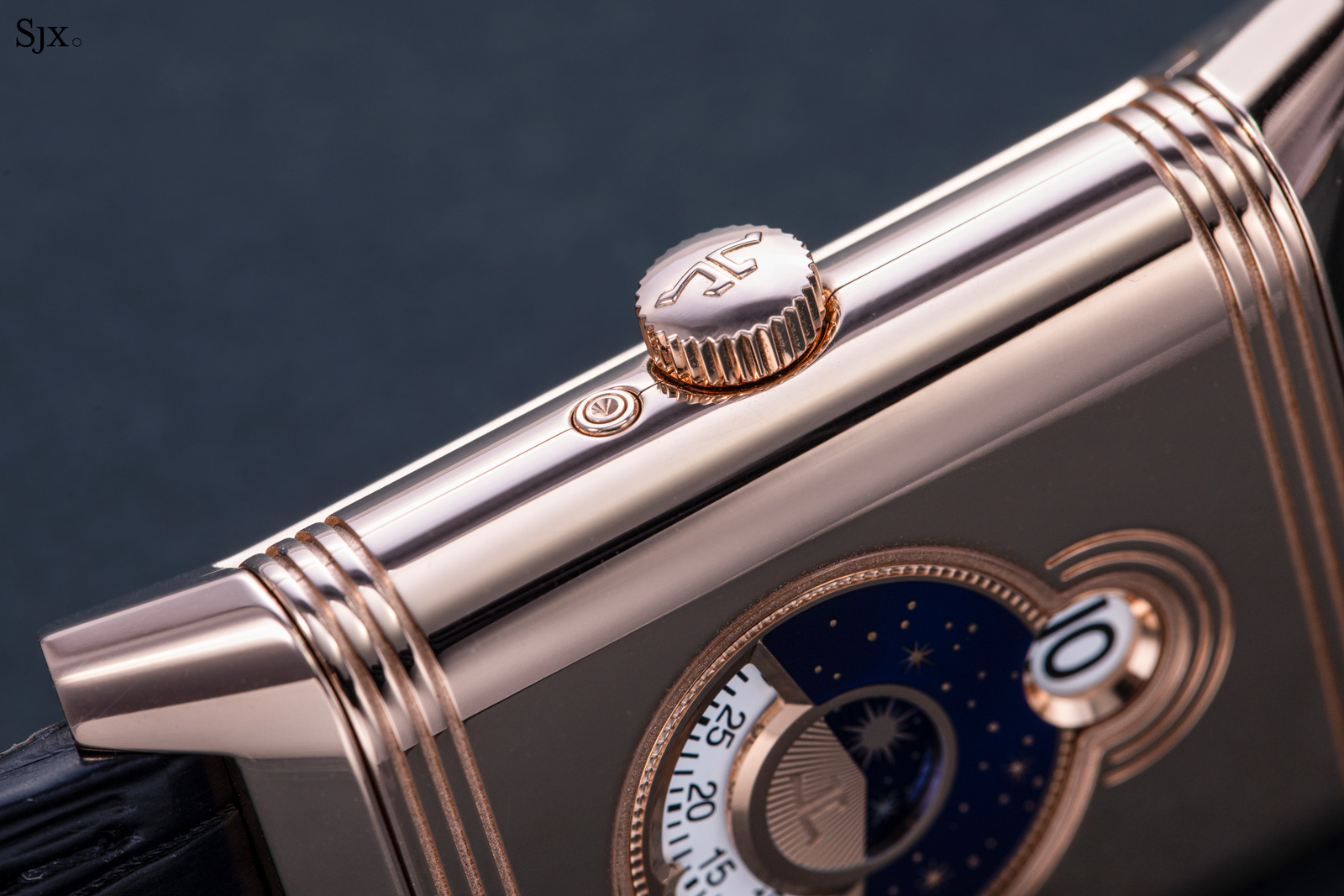 The front of the watch is pretty much the house style for the Reverso today – dauphine hands, baton markers, and a railway minute track that makes for a handsome, slightly conservative, design.

Perfectly symmetrical, the dial is easy to read and largely functional, but with a little bit of romance coming from the moon phase. The elements of the dial are executed well – applied indices and neat printing – except for the date-window frame. Its inner edge is bevelled, but with prominently rounded corners, rather than the 90-degree angles found on Lange big-date windows for instance, resulting in a less precise appearance. Even though the Nonantieme is a big watch, the dial has good proportions. That’s thanks to a display module that’s huge in relation to the base movement.

Its size allows for two large date discs – the pair together are as long as the width of the base plate – arranged side by side and on the same plane, which takes up the most real estate, though it helps reduce thickness. As a result, the oversized date is truly oversized and highly legible. 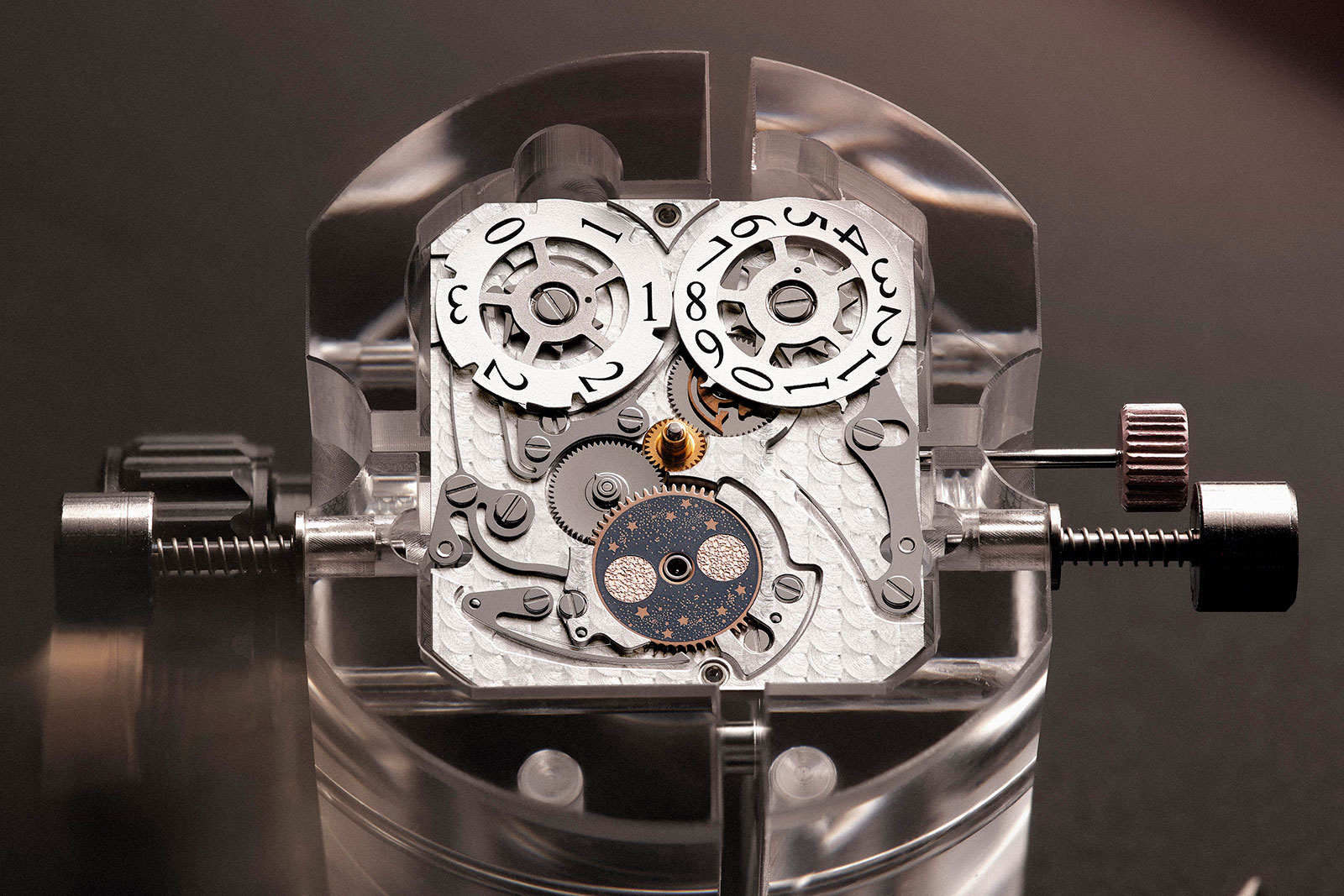 The under-dial of the cal. 826 on the front, revealing the twin date discs and moon phase

Poetic and Art Deco, the Nonantieme’s flip side is beautiful. The frame of the display is actually a blue-lacquered bridge that fits onto the snowman-shaped aperture on the case back.

The bridge is engraved, by machine it appears, with stars in relief, and then covered in blue lacquer that’s fired in an oven to set the lacquer. It’s then gently lapped to create a smooth surface that reveals the stars. 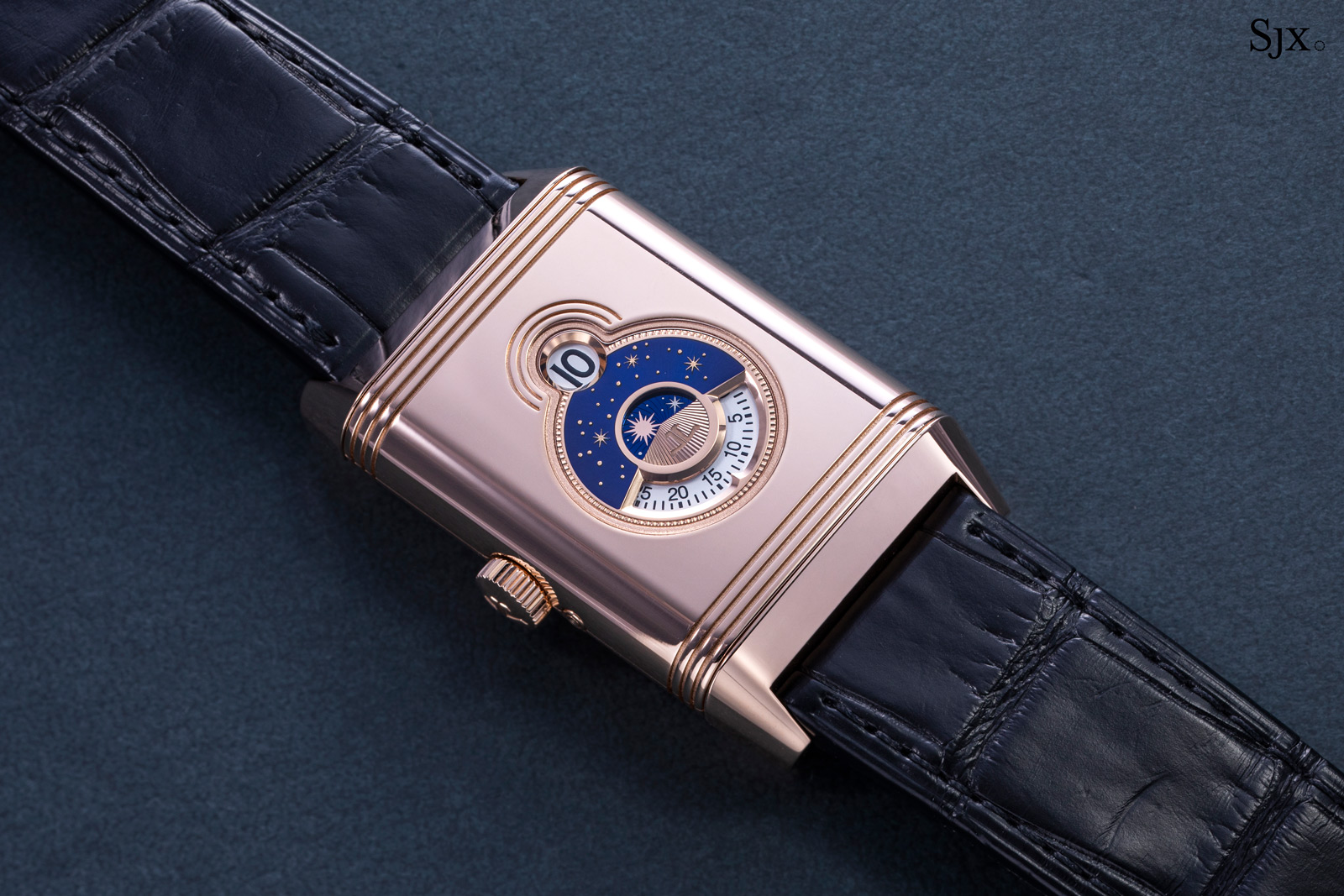 The engraved bridge before lacquering (left), and after. Image – JLC

Though the techniques are not quite artisanal metiers d’art – that would be hand engraving and vitreous enamel – the result is still striking in its simplicity and charm.

Though the presentation is elaborate, the display is straightforward. Hours sit in a porthole at the top, with minutes on a disc at the base. And in between the two is a day and night display taking the form of a disc showing a sun and moon. 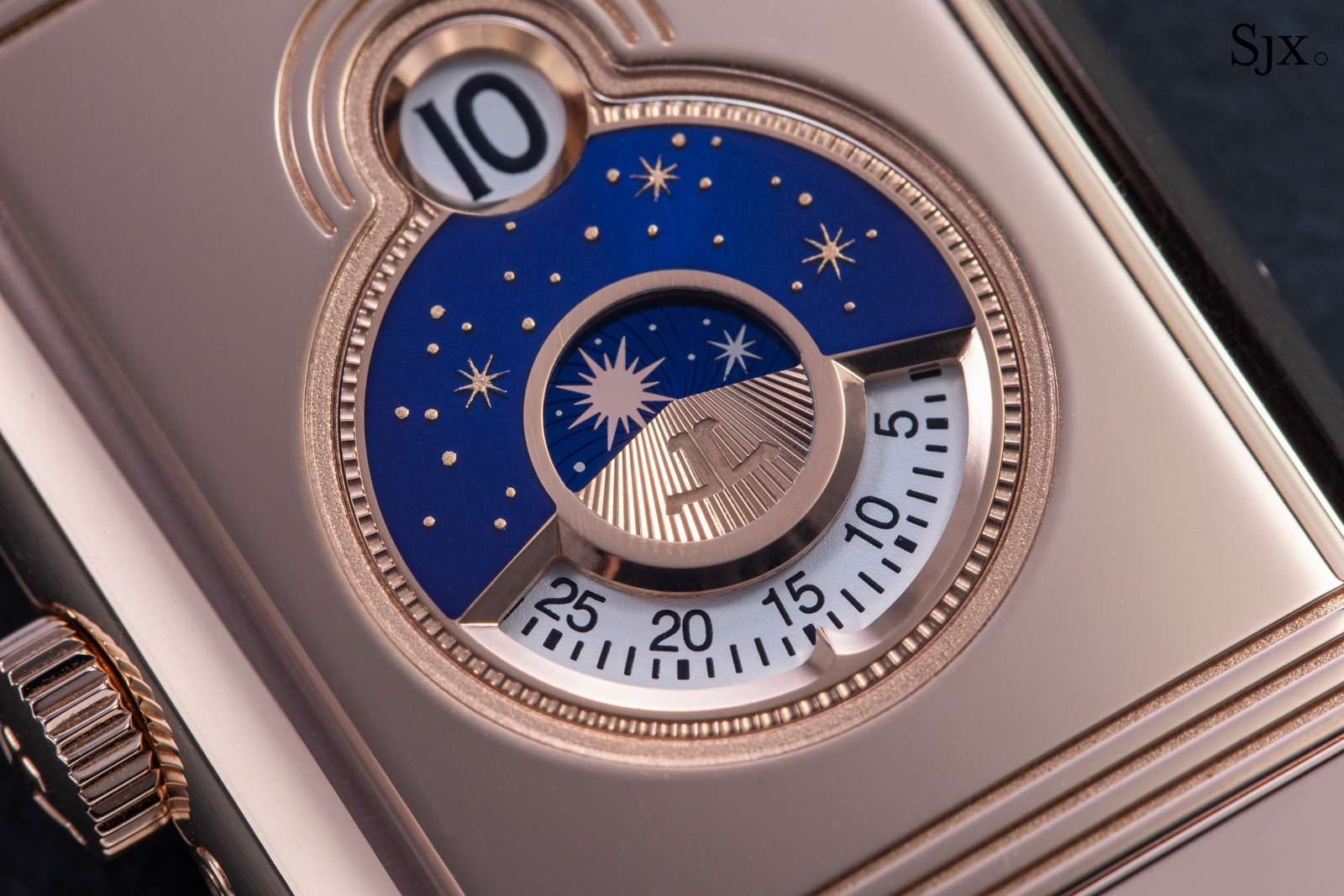 The workings of the display are also equally simple: the pinion for the hands on the front extends to the rear of the watch, and drives the trio of discs that indicate the hours, minutes, and day-night. As a result, the discs turn counterclockwise on the back (which is the same direction, in absolute terms, as the hands on the front).

Both the minute and day-night discs rotate continuously, while the hour discs is semi-jumping, meaning it glides over with a small jump like a conventional date display. Overall, the set up is clean and effective, though something more elaborate or inventive would have been a big plus. The under-dial view on the reverse also reveals the construction of the movement: three very large discs occupy most of the space, but the oval base movement is partially visible just above the top of the hour disc

The Nonantième is a good-looking watch, albeit large. Conceptually it’s slightly redundant, since it shows the same time on both sides. While the reverse is unusual and striking – it should have been one-sided with that being the only dial – the mechanics are basic. It feels like JLC should have done a little more, even if the result was more expensive, for the Reverso’s anniversary. A smart watch in more ways than one.