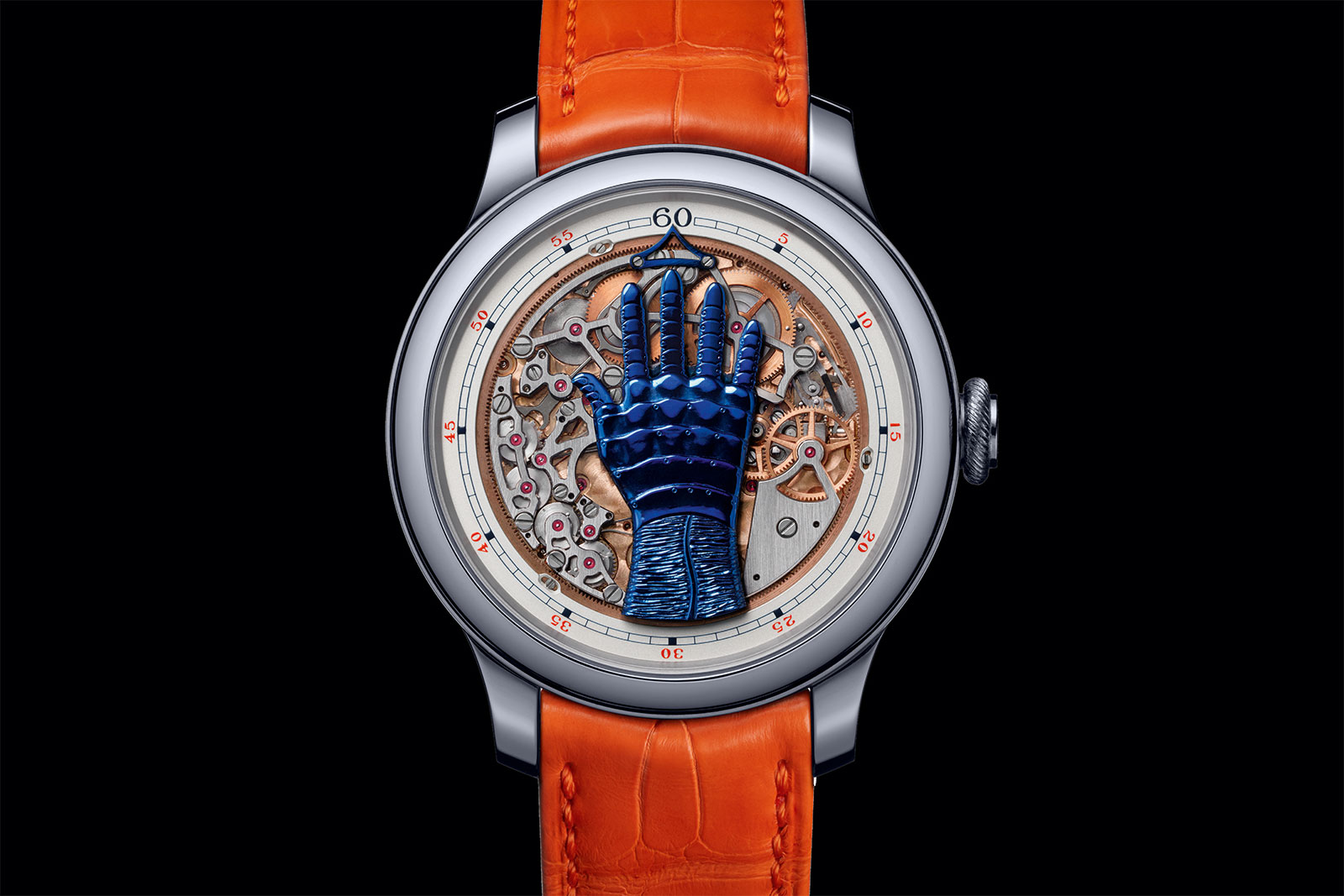 F.P. Journe’s creation for Only Watch 2021 is an interesting one – the FFC Blue, characterised by a hand on the dial that displays the hours.

Like F.P. Journe’s past contributions to Only Watch, the FFC Blue is powered by a prototype movement – rough around the edges and lots of character – and features a case of tantalum, the grey-blue metal synonymous with the bestselling Chronometre Bleu.

Named after the initials of Francis Ford Coppola, the film director best known for The Godfather, the FFC Blue originated in a 2012 visit to Mr Coppola’s residence. The director asked Mr Journe a seemingly innocuous question over dinner, wondering whether it was possible to tell the time with a human hand.

Mr Journe mulled it over and over several years devised a mechanism with the help of Mr Coppola, who sent sketches of the desired finger positions for each hour.

The unveiling of the FFC Blue also marks the 20th anniversary of the F.P. Journe Octa and its automatic cal. 1300 (it’s the second watch to mark the occasion in fact), which is the base movement of the FFC Blue. 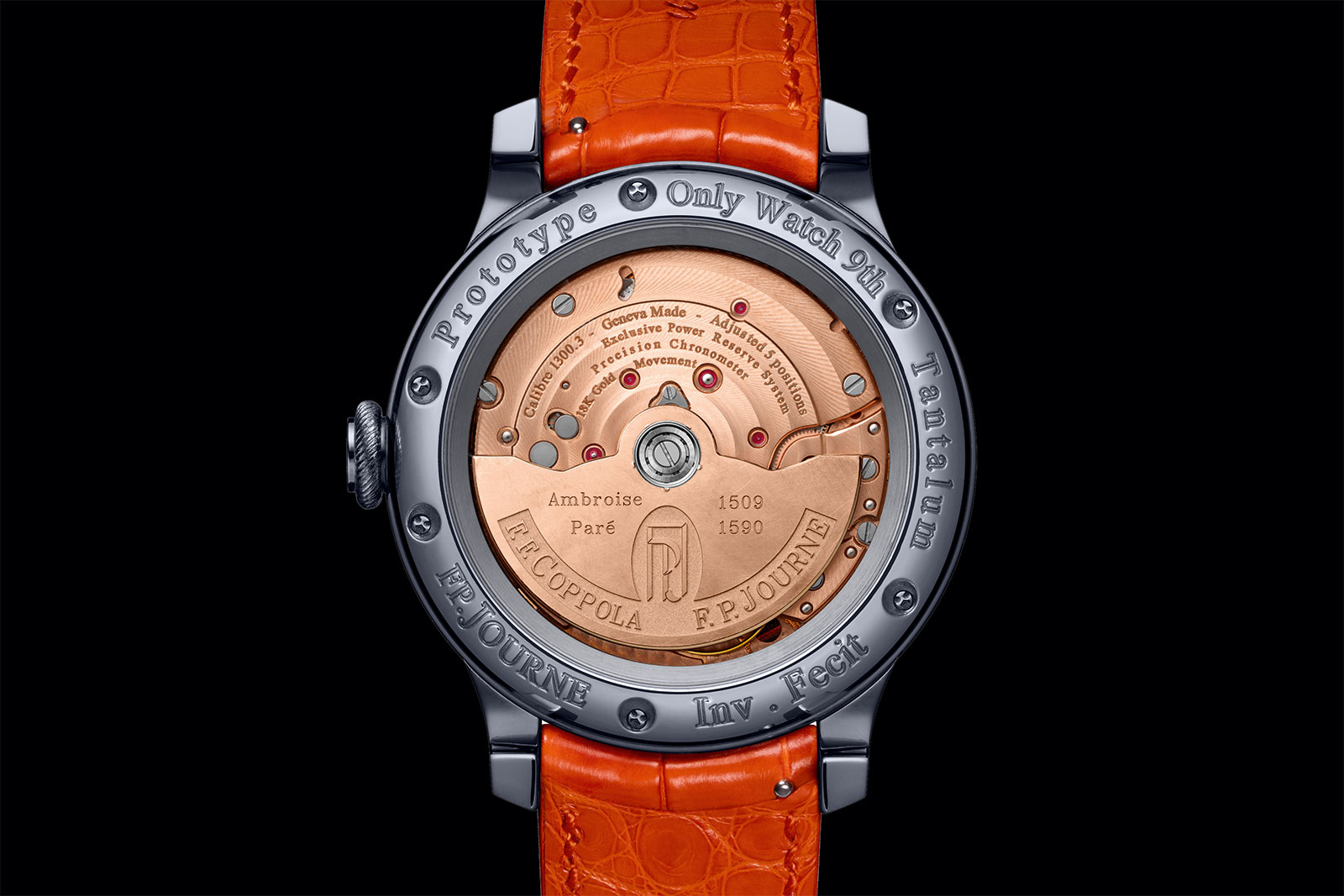 At first glance, the FFC Blue is bizarre for F.P. Journe. The hand sculpture on the dial is unlike most of the brand’s other designs, which are mostly conservative and often Breguet-inspired.

Upon closer examination, indeed a bizarre watch it is – in a good way.

The mechanism is an impressive example of an automaton, a complex answer to a simple question: how can the human hand indicate 12 hours of time with individual fingers instantaneously extending or retracting? 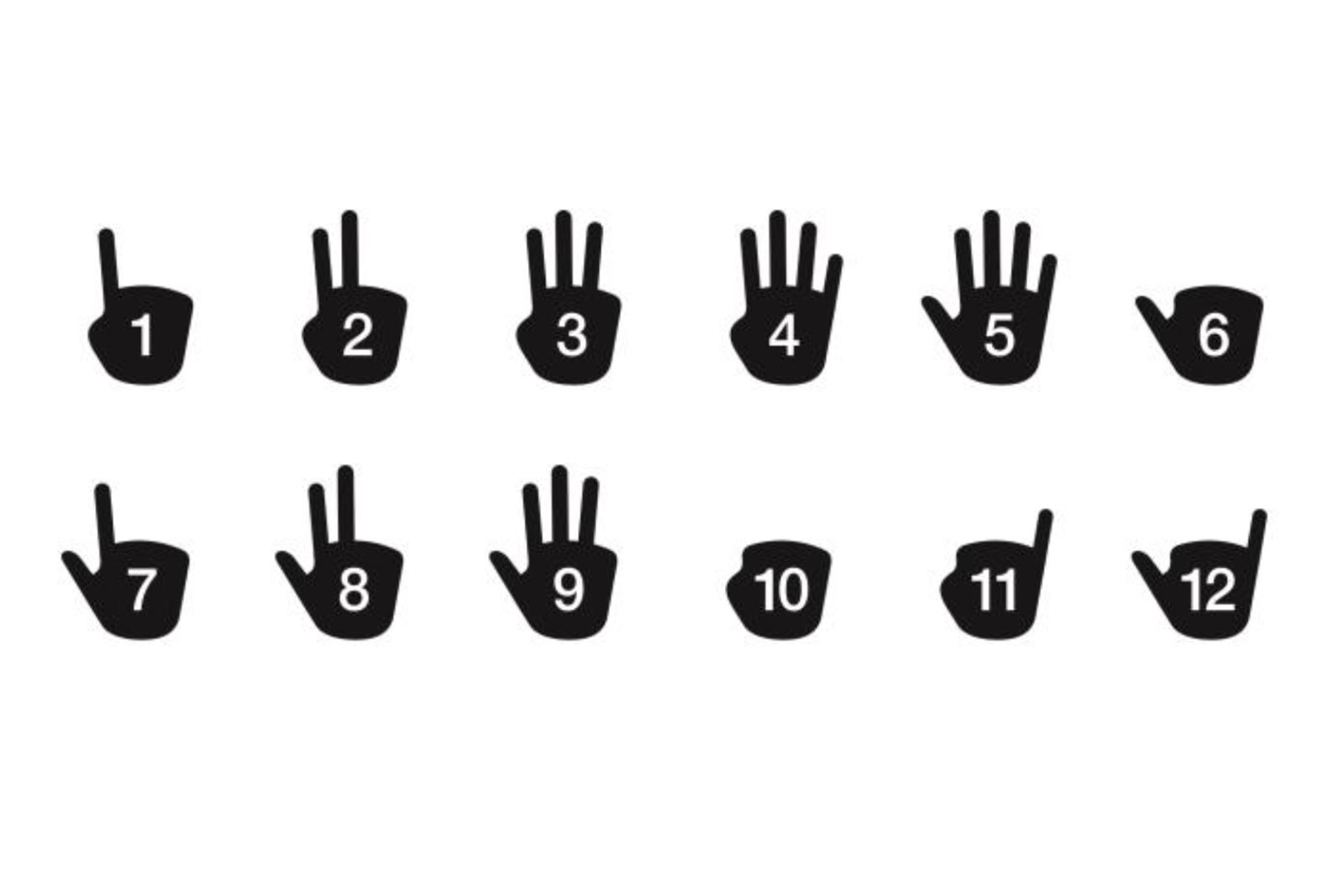 The hand indication system for the hours proposed by Mr Coppola

The creativity behind Mr Coppola’s hand signs to tell the dial is undeniable, but equally notable is Mr Journe’s execution of the idea. The complication fits on the standard cal. 1300 and fits within a 42 mm case that’s just 10.70 mm high – a remarkable mechanical achievement quite unlike any other F.P. Journe watch.

We only have a simple dial and case back photo to go on for now – we’ll have “live” photos once the watch goes on its world tour – but we can infer the workings of the automaton since most of the mechanism is exposed on the dial.

The highlight is the blue hand that was inspired by a mechanical hand designed by Ambroise Paré (1509-1590), a physician regarded as a pioneer of modern surgery. It consists of five individual fingers that can extend or retract, each controlled by a series of levers, cams, wheels that discreetly connect to the left side of the movement. 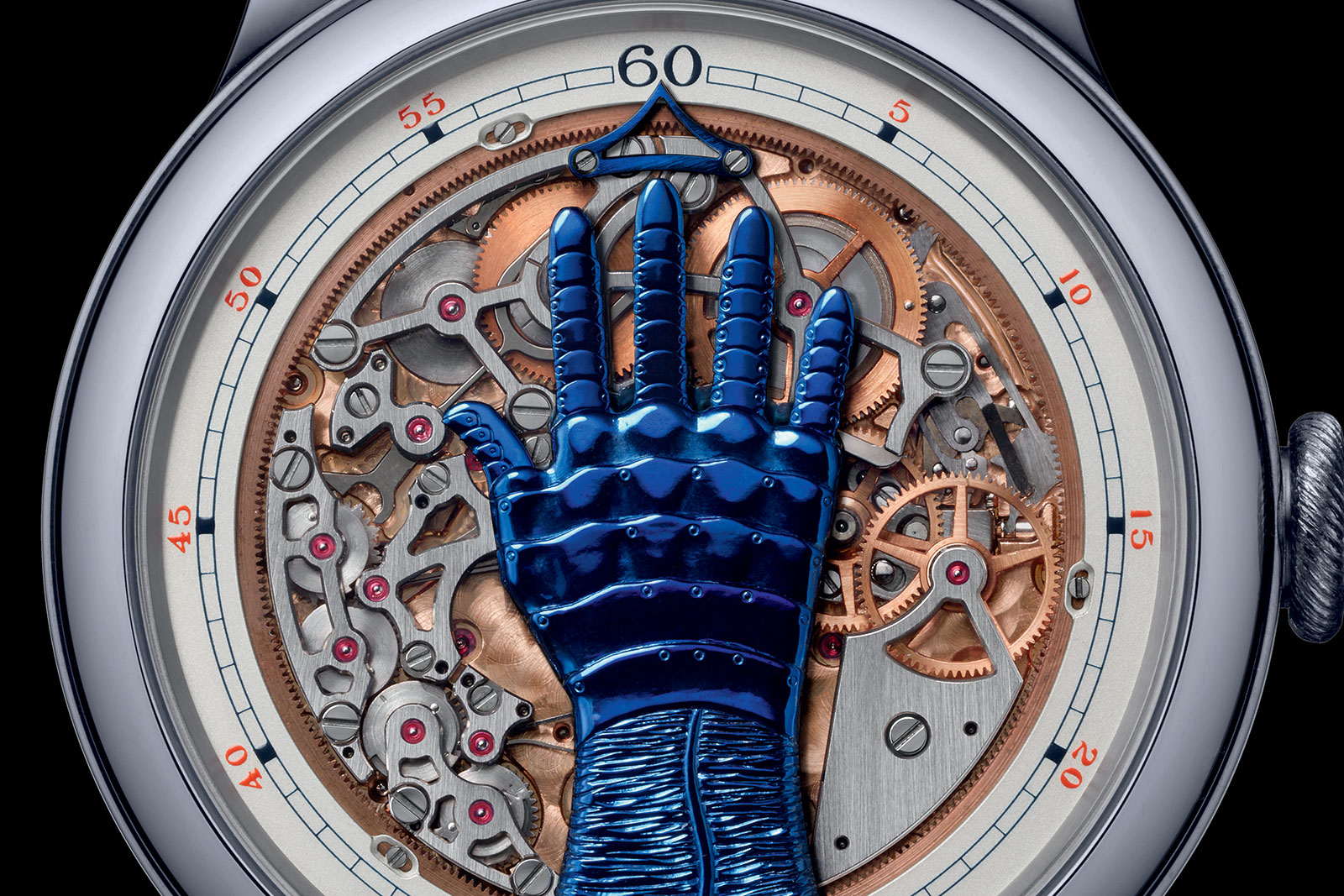 Since the hand occupies the centre of the dial, a peripheral disc indicates the minutes. A blue arrow at 12 o’clock points to the minutes as the disc turns in a counter-clockwise direction.

There are plenty of intriguing mechanical details in the FFC Blue that deserve attention, and a more detailed review will be done in the future after a hands-on – pun unintended. 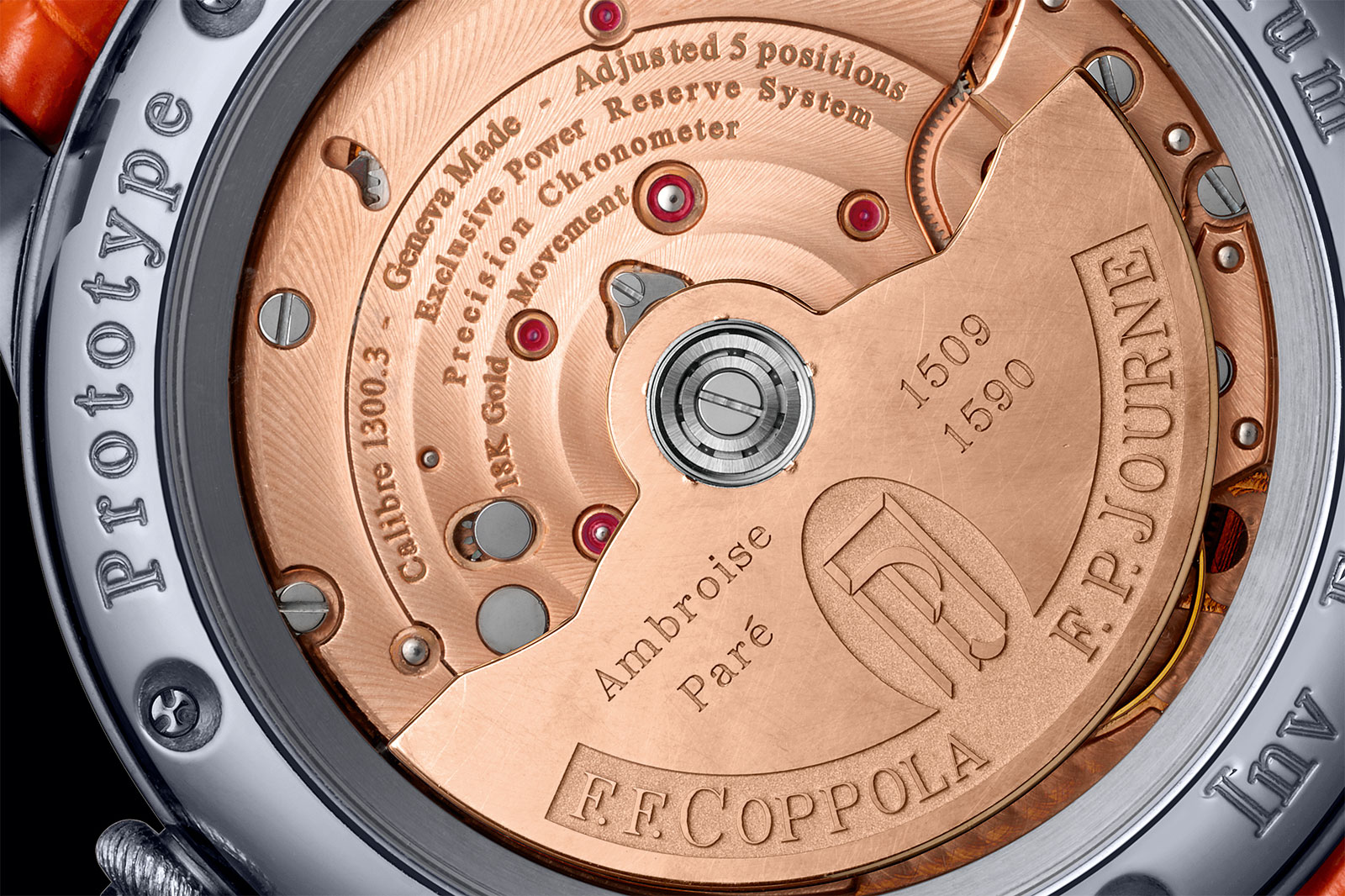 Introducing the F.P. Journe Astronomic Blue for Only Watch 2019