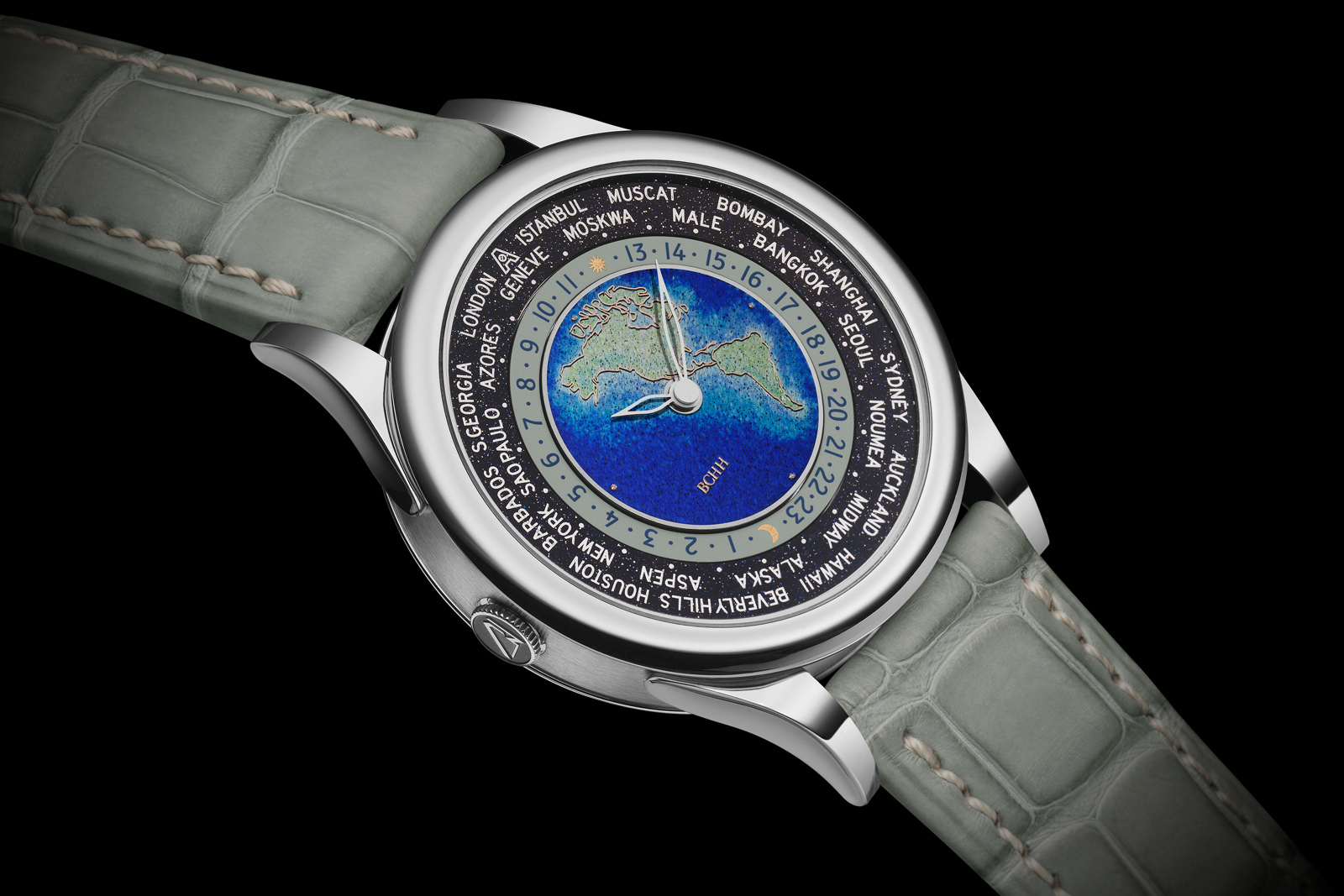 Singaporean collector Benjamin Chee has long been involved in watchmaking as a hobbyist, having set up two brands in the last decade, Maison Celadon for dress watches and Millechron for sports watches. While his earlier endeavours were powered by excellent Vaucher movements, Mr Chee’s latest venture is the most haute horlogerie to date.

Taking its name from Mr Chee’s initials, the BCHH Celestial Voyager combines fine watchmaking with metiers d’art in series of pièce unique world-time wristwatches executed by independent watchmaker Andersen Genève. Cased in platinum, each of the seven watches in the series features a cloisonné enamel dial depicting a different stylised map. At the same time, the watches are accented by details like soldered lugs and a mother of pearl inlay on the back. 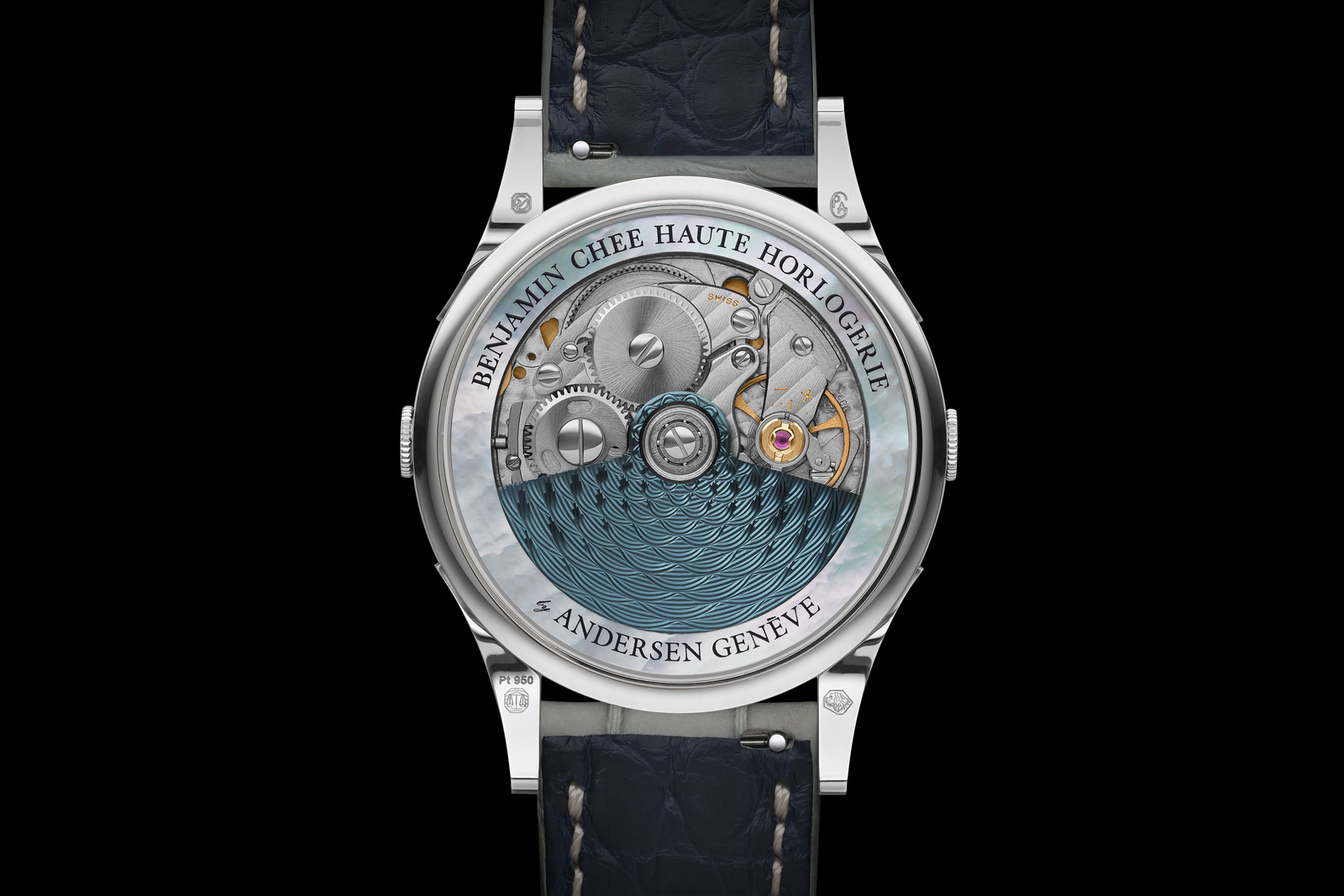 The Celestial Voyager is typical of Andersen’s products, meaning it’s classical in design and well made in an artisanal manner. But like many of Andersen’s watches, the Voyager is bespoke, so it reflects Mr Chee’s preferences and eye for detail.

Take for instance the dial, which is elaborate in a discreet manner. The cloisonné enamel centre is the highlight, and most watches would stop there, but here the cities ring is made of sparkly aventurine glass.

Elements like the cities ring play a supporting role, but getting them right often distinguishes the great from the good. The Celestial Voyager gets most of it right, and is one of the better looking world time watches on the market now. It’s actually surprisingly fancy in execution, but in a coherent and restrained manner – save for the branding on the back, which is a bit much, but fortunately hidden. 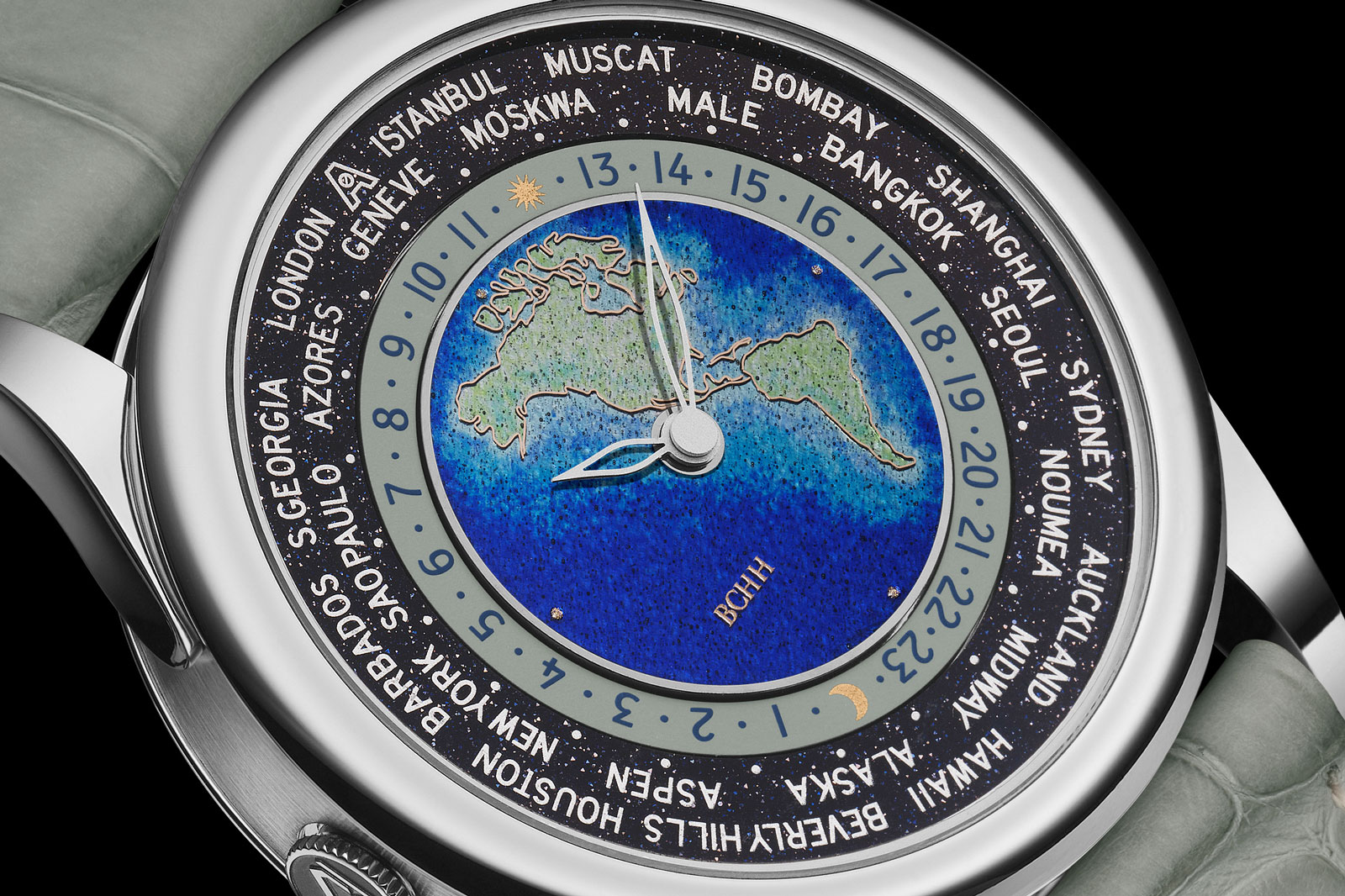 Likewise, the case is simple but attractive, and notably classical at just 37.7 mm wide. In a nod to Patek Philippe’s mid-20th century world time wristwatches like the ref. 2523 – which in turn inspired the Andersen Mundus, the thinnest-ever world time –  the Celestial Voyager has a twin crowns, one on each side of the case, creating a symmetrical, elegant appearance. But unlike most twin-crown world time watches, its crowns are tiny and almost flat, giving the case an unbroken outline.

And just as elegant are the lugs, which seems to flow from the case band but are actually separate components, evidenced by the clean break between the contrasting polished lugs and brushed case. 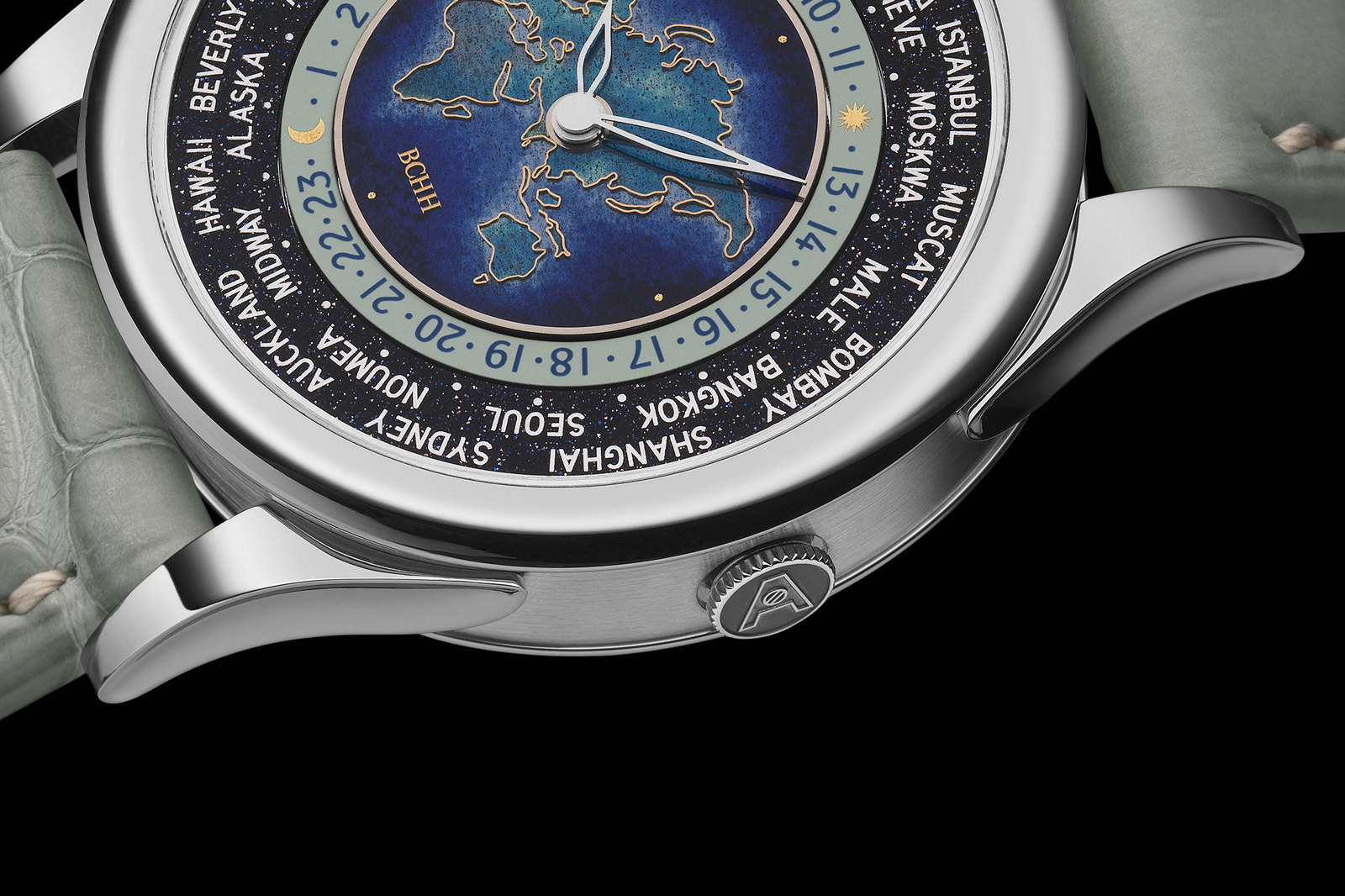 Then there’s the movement, a vintage A. Schild (AS) 1876 ébauche enhanced with Andersen’s world-time module.

It’s been dressed up in style, like Andersen’s trademark blue-gold guilloche rotor. According to the brand, the movement components are hand-finished, including flourishes like polished bevels on the bridges.

And it comes with an extra of a mother-of-pearl ring  over the movement spacer that could have been left out. The oversized BCHH branding on the ring feels out of place against the elegant restraint found in the rest of the watch. 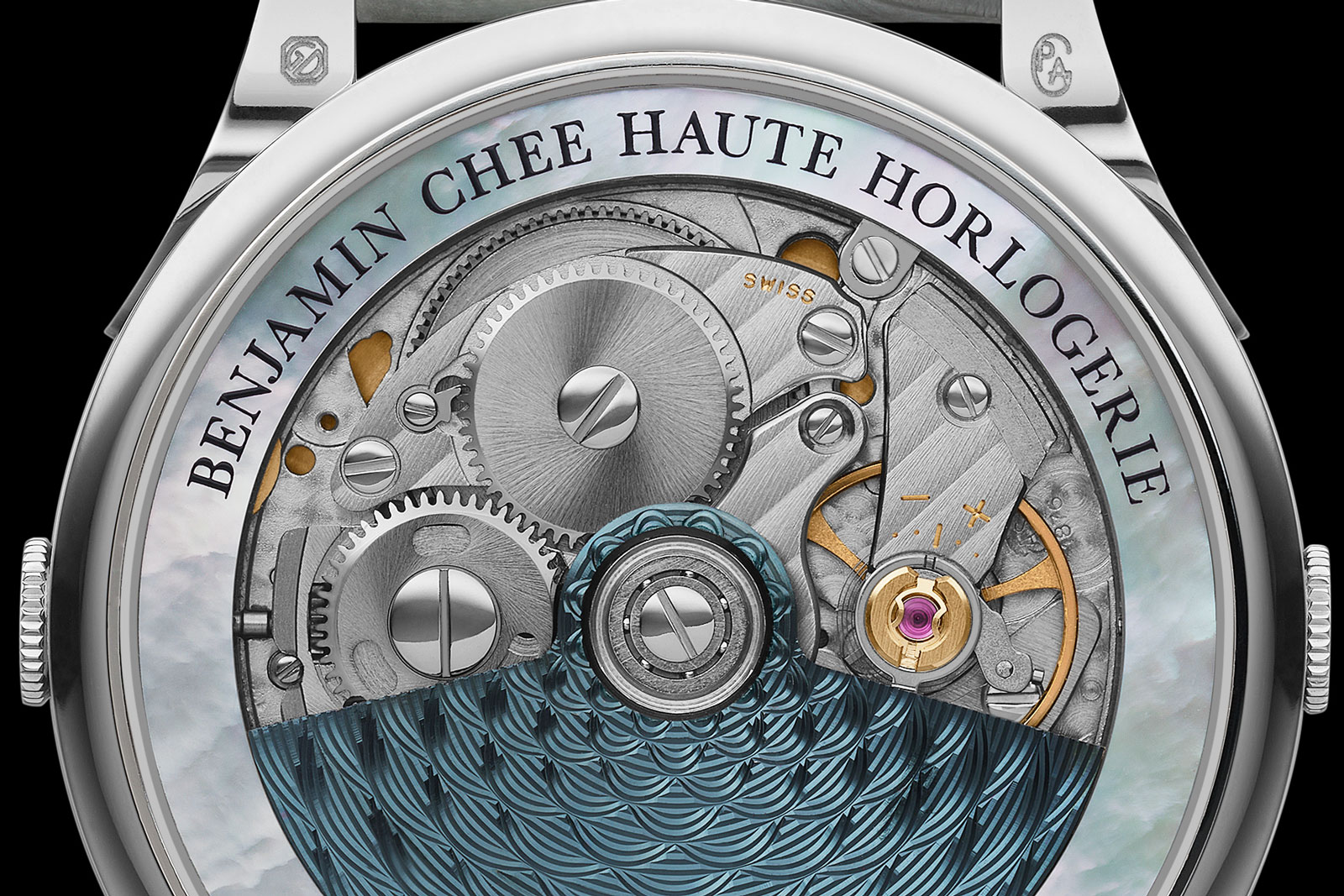 While the Celestial Voyager is replete with interesting details, the enamelled centre of the dial is no doubt its defining characteristic, so it’s worth looking into the process of producing a fired enamel dial (the appeal of such dials we covered a few years back).

As the name suggests – cloison is “partition” in French – cloisonné enamel relies on fine gold wire to form the outline of a motif, which is the map of a particular region for each of the dials. 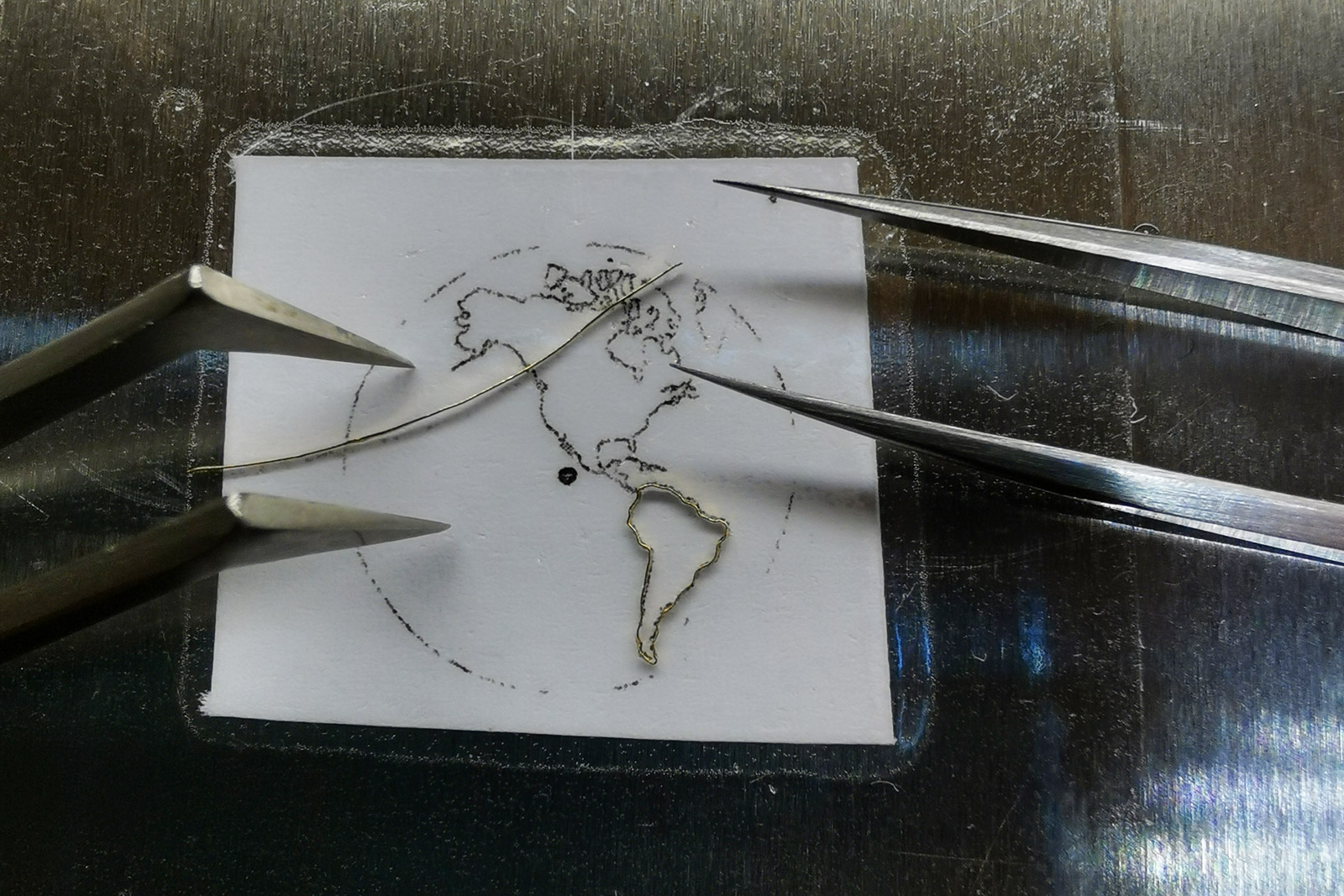 The artfully bent wires are then welded onto the dial blank, after which the painting and firing starts.

Enamel paste, a compound of ground, coloured glass and water or oil, is applied onto the dial with a tiny brush, one colour at a time.

Each colour is fired individually in the oven, calling for multiple trips to the oven – more than 20 according to the brand – before the ideal, graduated colours of the dial are achieved. 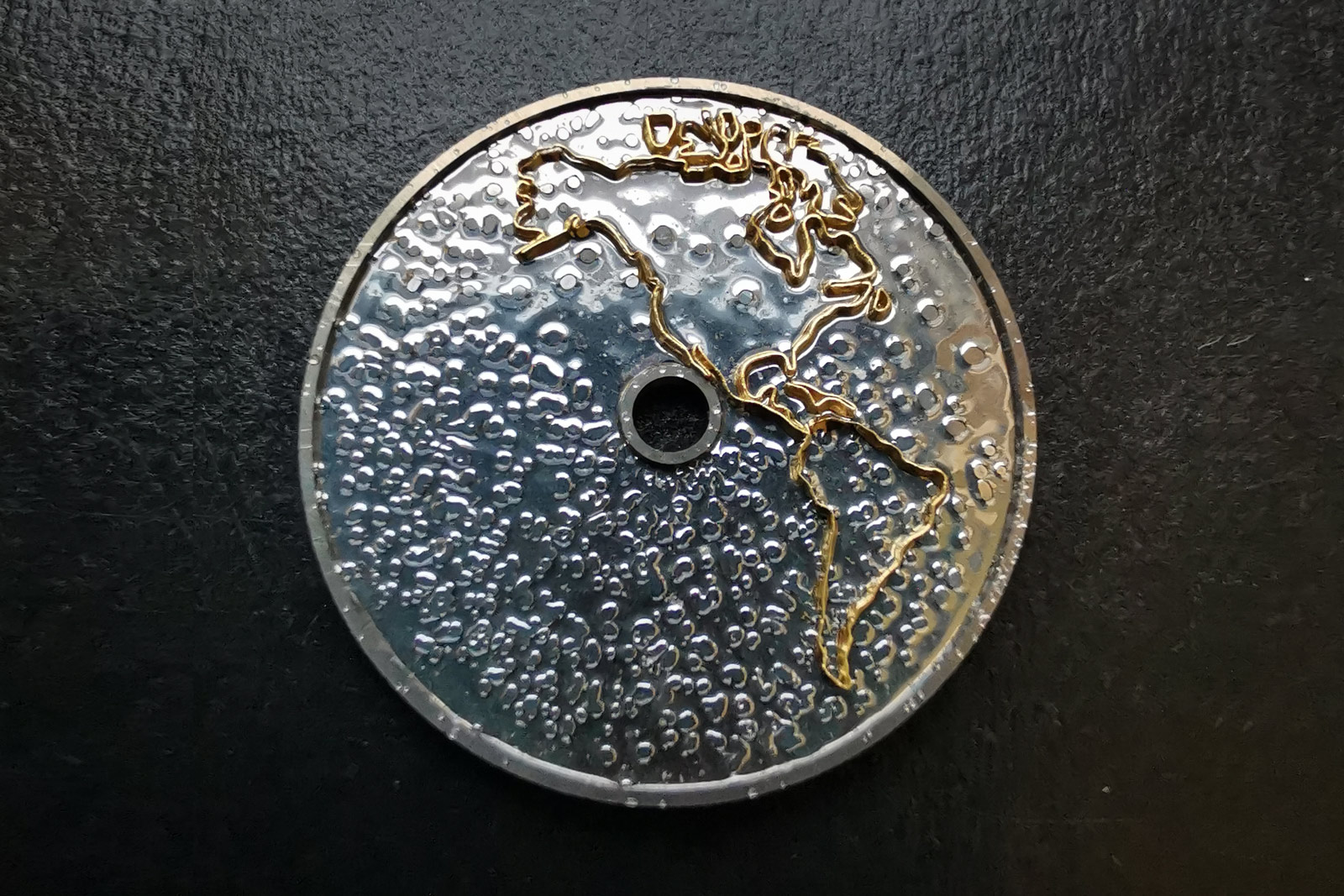 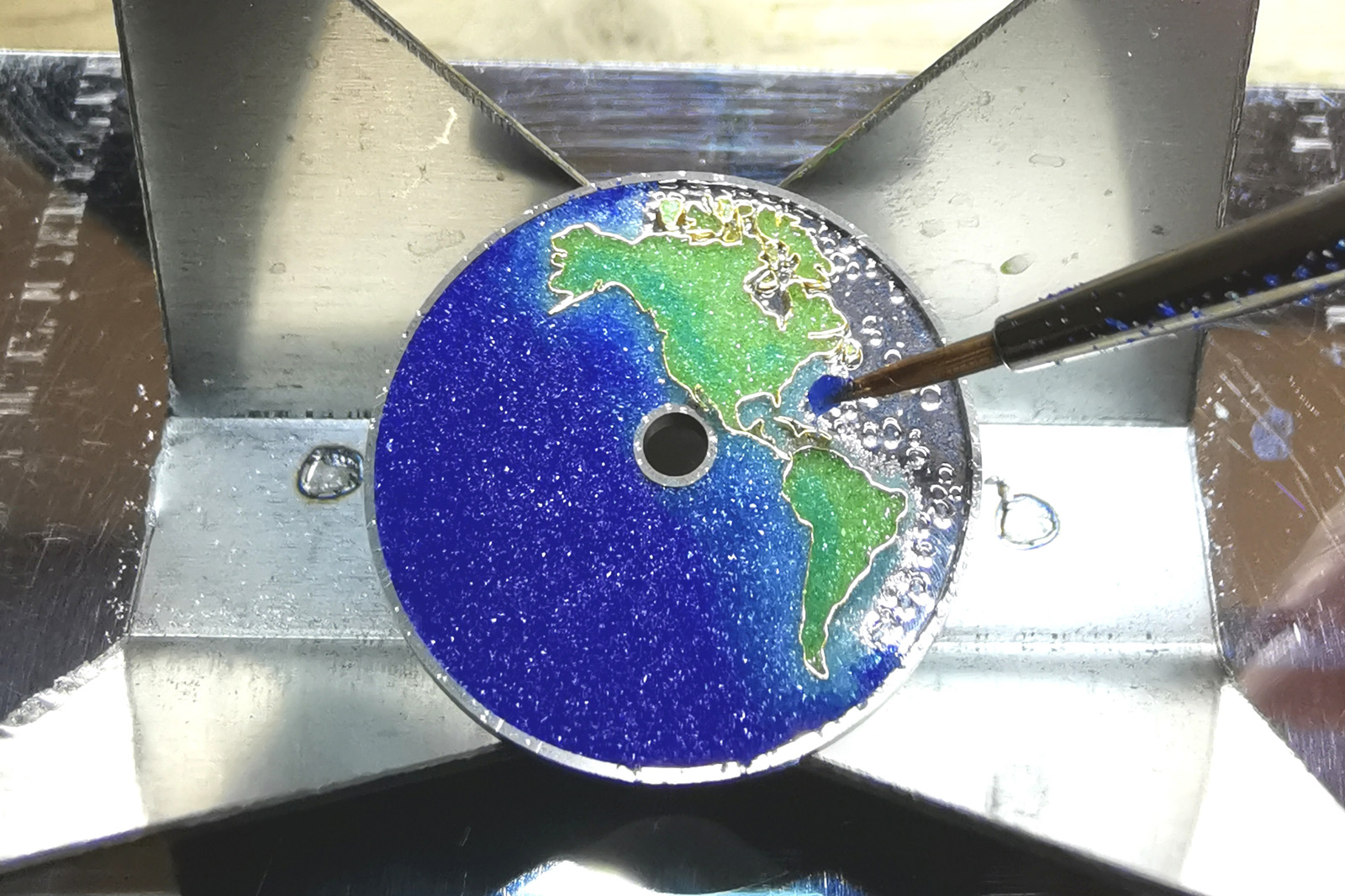 Applying enamel paste with a brush 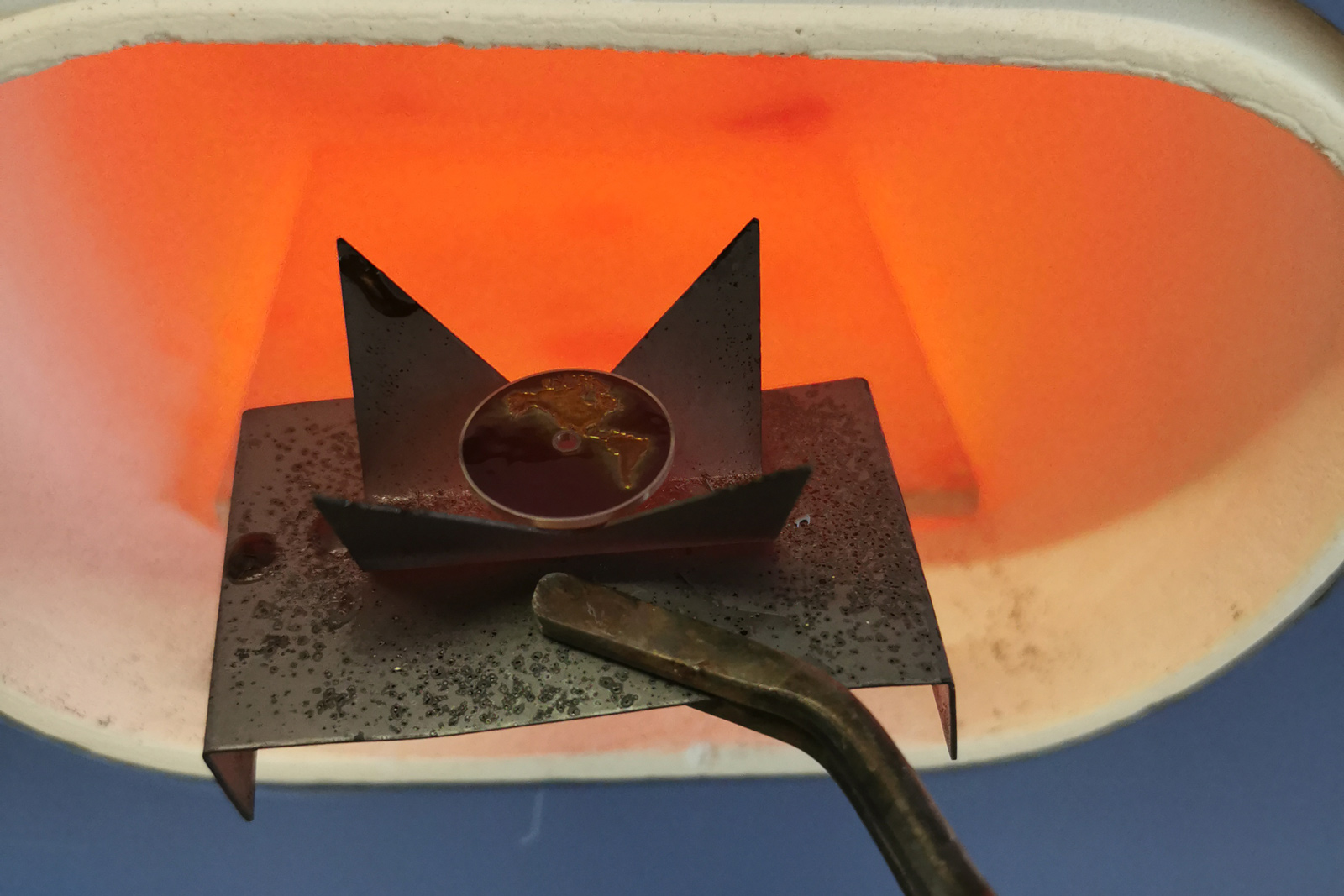 Firing the dial in an oven

The most challenging step is firing, which requires perfect control of the duration and temperature – even the slightest mistake requires discarding the dial and restarting from scratch – explaining why fine cloisonné enamel dials aren’t found on mass-produced watches.

Even cloisonné dials with identical motifs are unique, given the nuances in colour that are inevitable with the material. But each of the Celestial Voyager watches bear different maps, making them unique in palette and pattern, ranging from a striking green for the Americas to a serene blue for Eurasia. 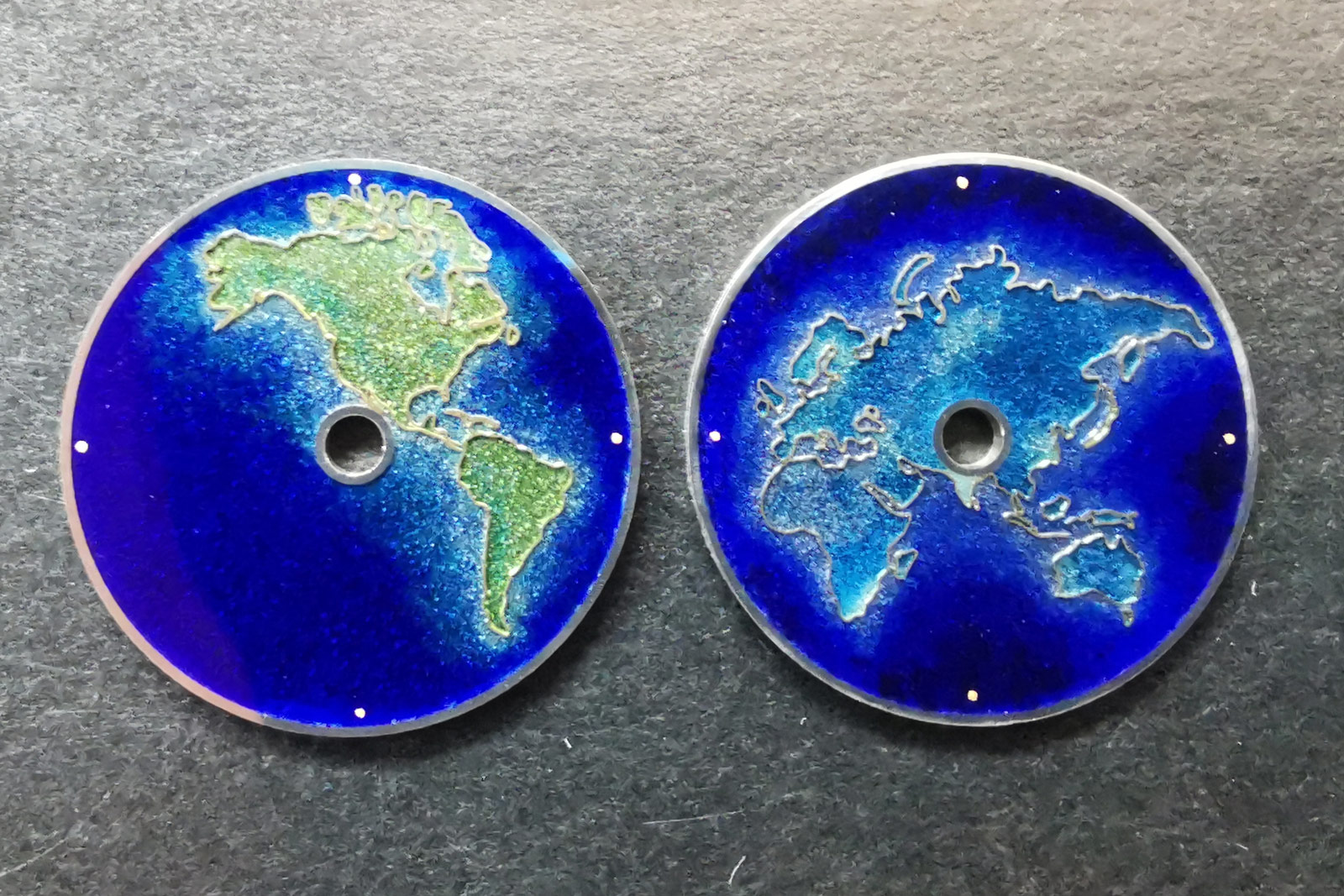 The Americas (left), and Eurasia 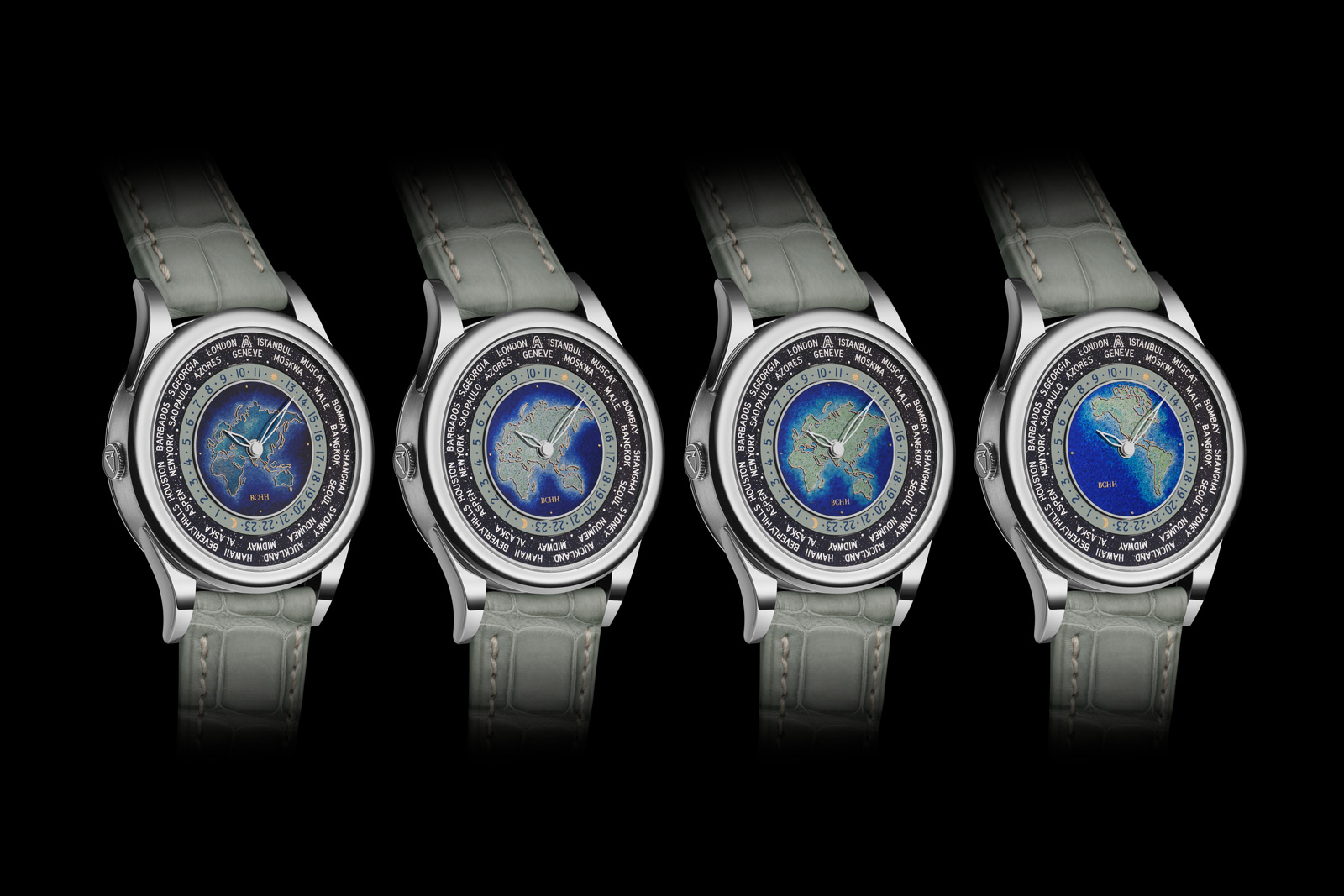 Limited edition: Seven pieces, each unique
Availability: Directly from BCHH
Price: Approximately CHF48,800 before taxes, and depending on customisation