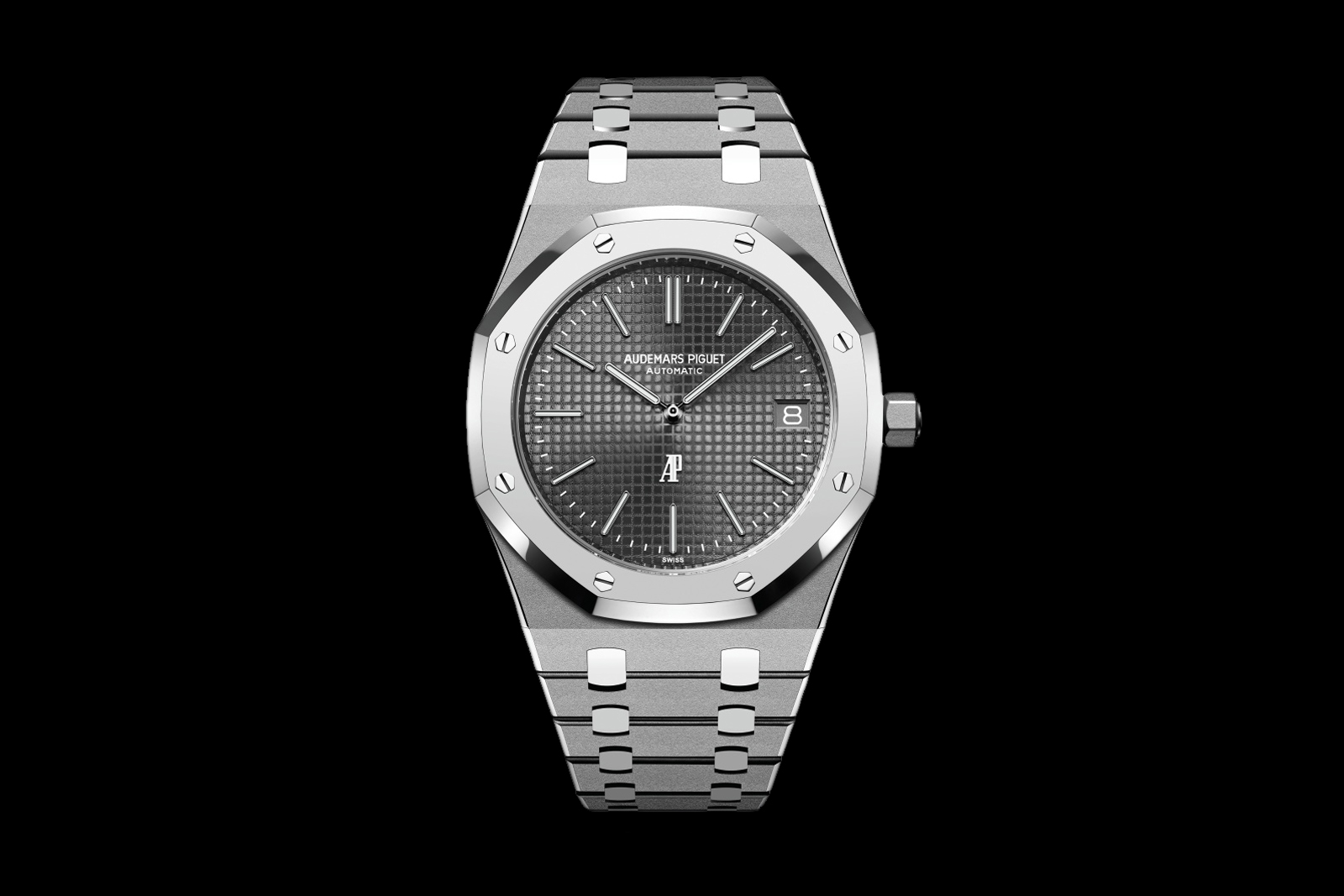 But AP is saying farewell in style at Only Watch 2021 with the Royal Oak “Jumbo” Extra-Thin Only Watch ref. 15202XT in titanium and bulk metallic glass. Despite the modern materials, the watch is a dead ringer for an “A Series” Royal Oak ref. 5402 because the dial is a replica of the original, right down to the typography. 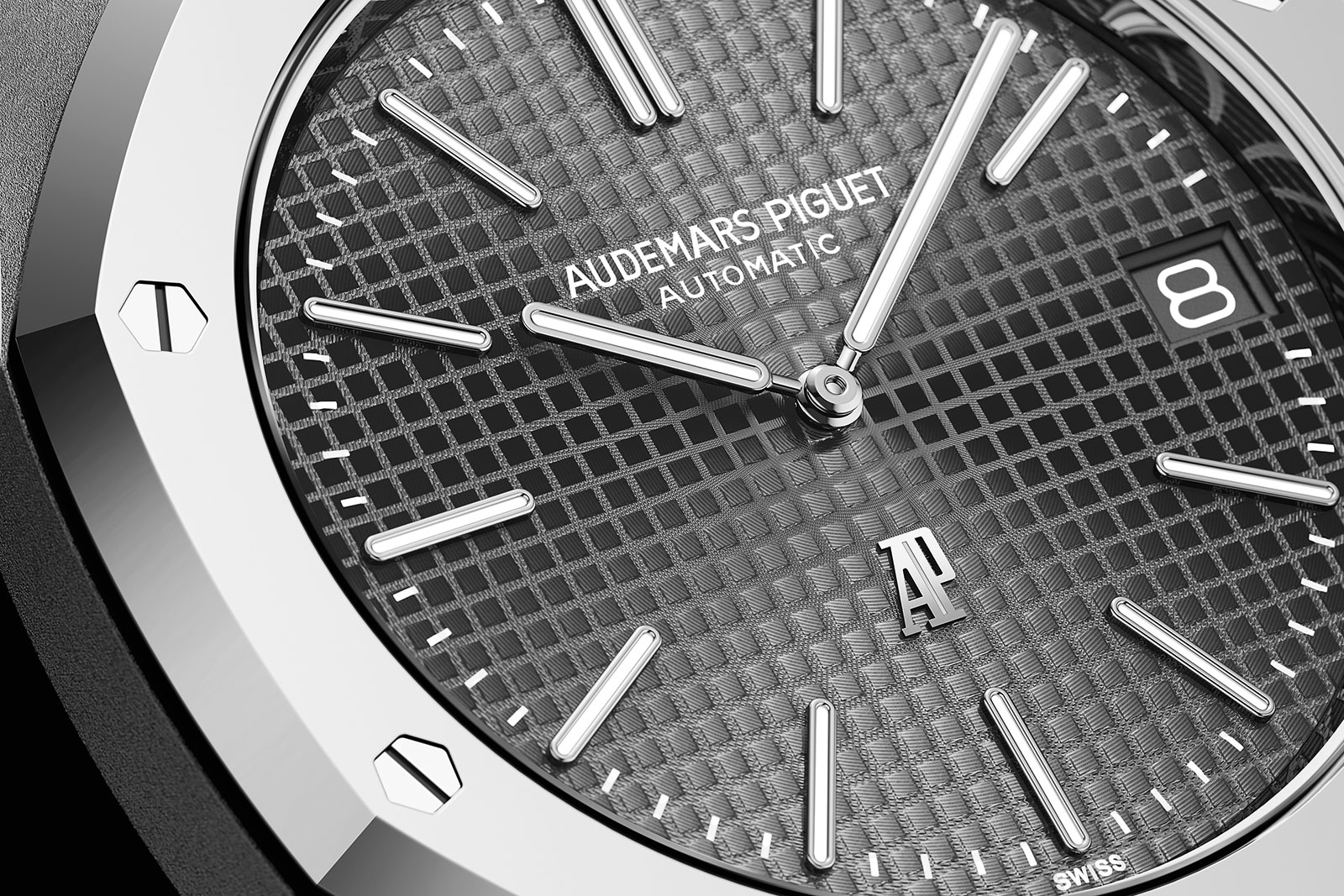 Note the typography, as well as “Swiss” at six under the indices – details identical to those on the ref. 5402

It’s hard to render the ref. 15202 unattractive. Close to the original in look and feel, the ref. 15202 has been iterated several times in the last few years, with each version slightly different in style but similarly attractive – examples include the “salmon” or smoked-green versions.

Dressed in shades of grey, the Only Watch edition differs from its predecessors in colour and texture, but remains equally handsome. The all-grey, tone-on-tone palette has an appealing industrial feel, which suits the angular style that’s slightly brutal but refined in construction. 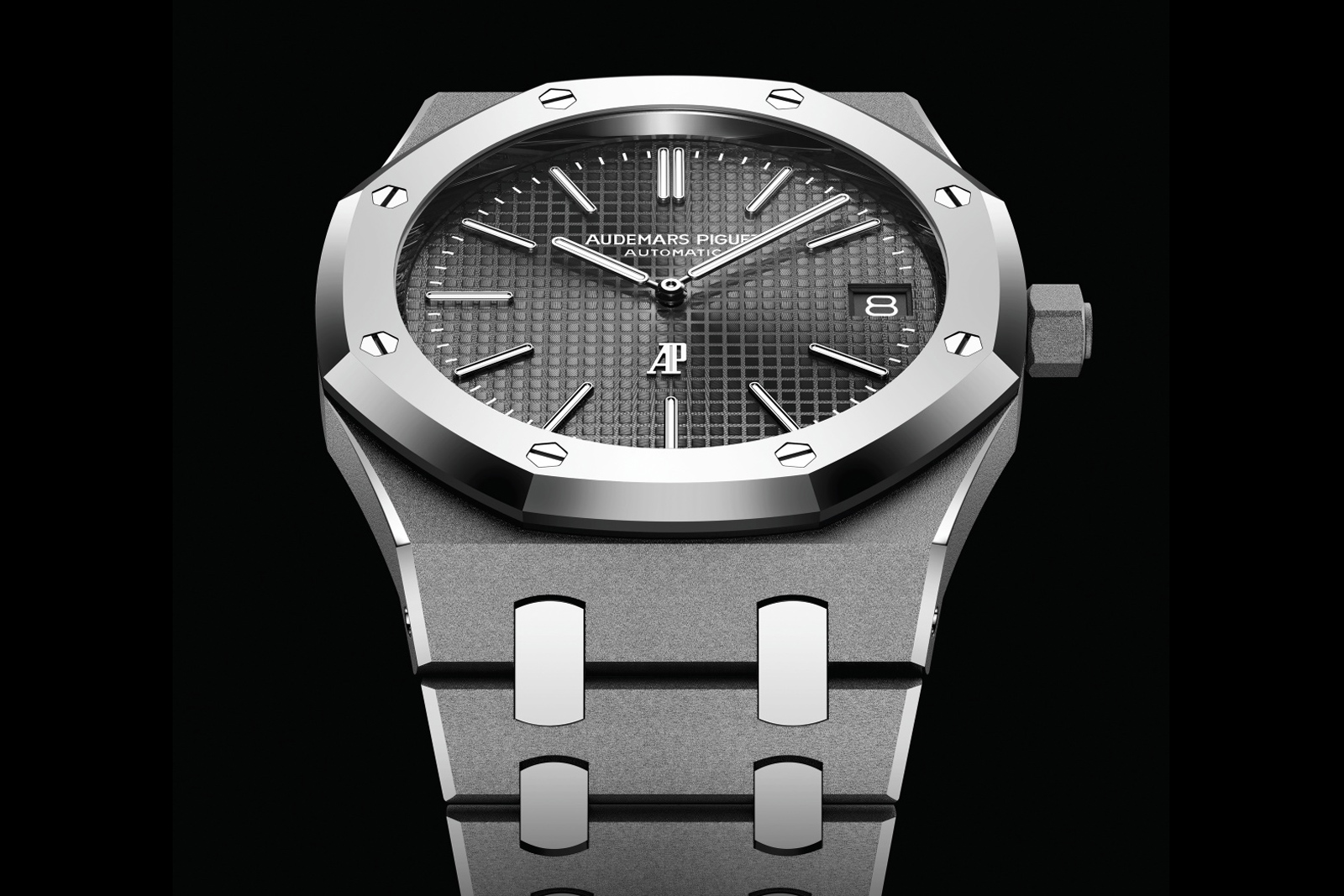 The colours are not the only differentiating factor for the Only Watch “Jumbo”. The sandblasted titanium case and bracelet is a first for the ref. 15202 – the standard finish is a linear brushing – while the use of bulk metallic glass is a first for the brand as a whole.

And a more subtle detail that sets apart the Only Watch “Jumbo” is perhaps the most important: the revival of the dial found on the vintage original. This vintage touch might also be hint at what an upcoming Royal Oak might be.

Like AP’s contributions to previous Only Watch auctions, the “Jumbo” ref. 15202XT is a modified example of a regular-production model. With the overall structure fixed, it is left to the details to distinguish the Only Watch “Jumbo”.

A key feature of the Only Watch version is the use of twin materials for the case. One is familiar, titanium, and the other, novel – bulk metallic glass (BMG). The material is a metal alloy also known as amorphous metal, because it lacks the ordered-crystal structure of metal, but has an amorphous arrangement of atoms within glass. 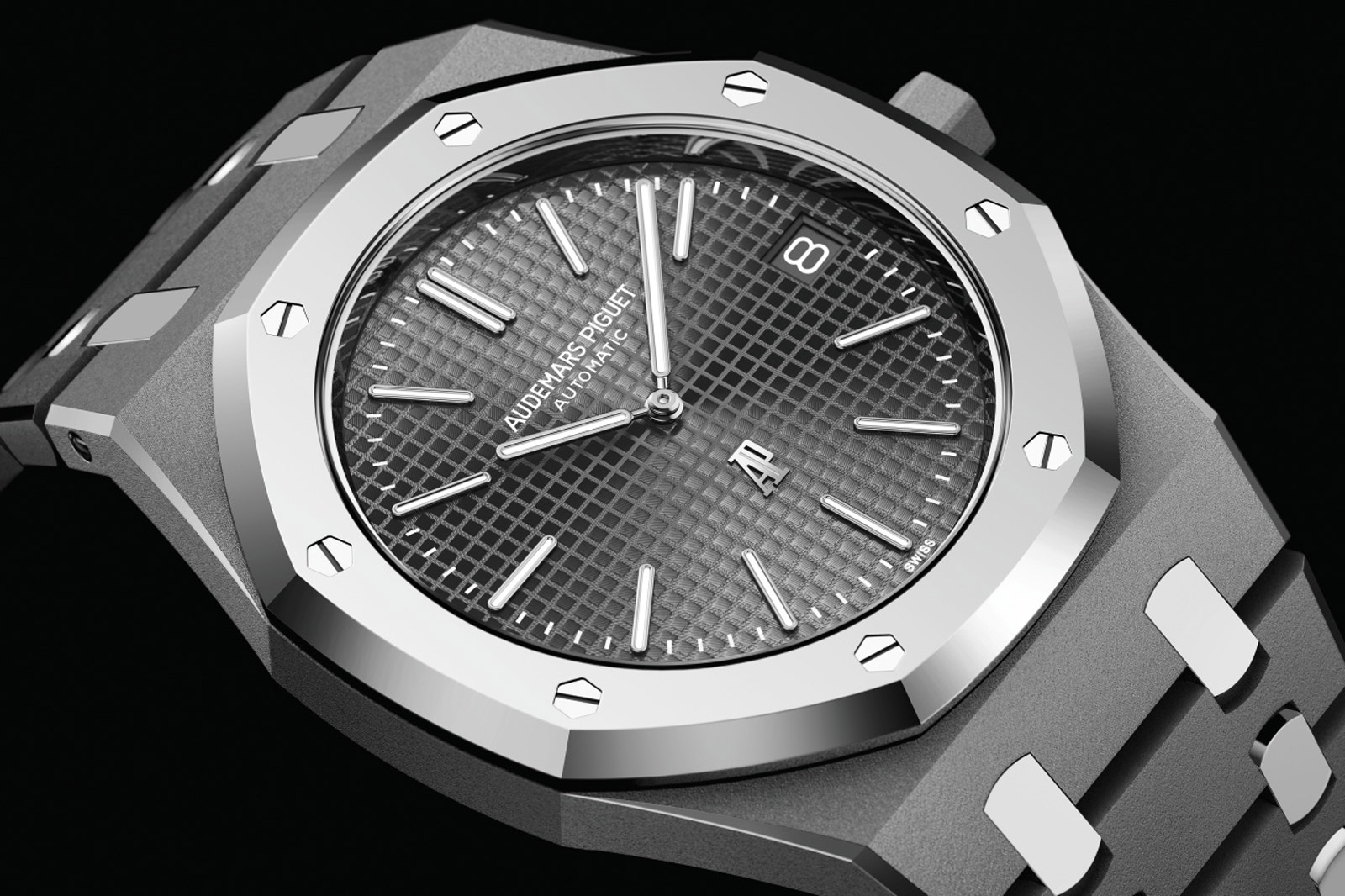 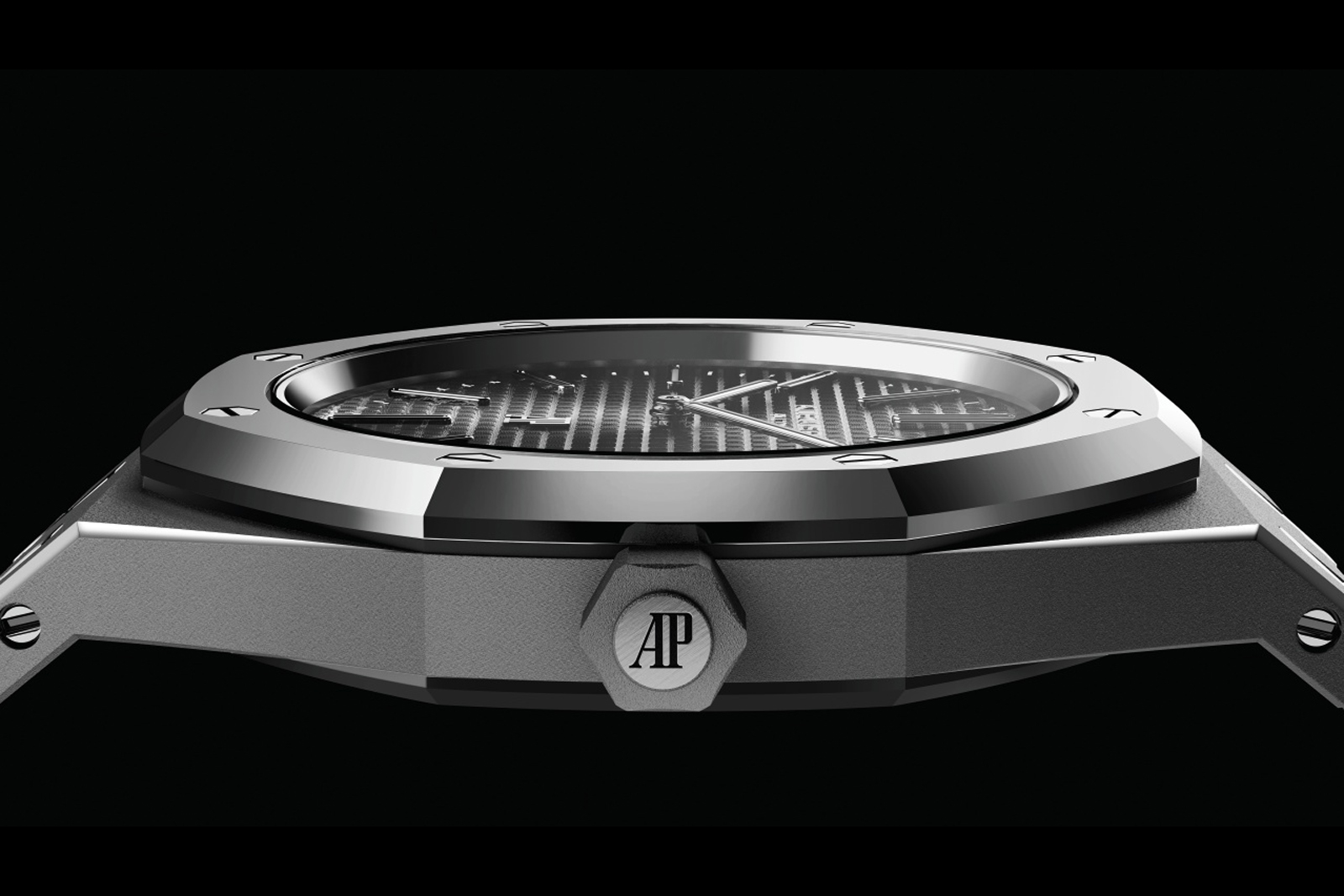 According to AP, the specific material used is a palladium-based BMG, which allows for a “unique play of light” when finished by hand. It is finished with a mirror polish and used for the bezel, connecting links on the bracelet, and case back.

On top of the uncommon materials, the Only Watch “Jumbo” is finished differently. Most of the case and bracelet are sandblasted, creating a granular, muted look that suits the monochromatic palette. But in keeping with Royal Oak tradition, the sandblasted surfaces are framed by mirror-polished bevels that can be found along the edges of the case and bracelet. And of course the BMG bezel is entirely polished.

Finally, the Only Watch “Jumbo” is also a farewell to the cal. 2121 (or cal. 2120) within. Originally the cal. 920 developed by Jaeger-LeCoultre (JLC), the movement was acquired by AP in 2000 (when it sold its stake in JLC) and has been powering the Royal Oak Extra-Thin and Royal Oak Perpetual Calendar since. 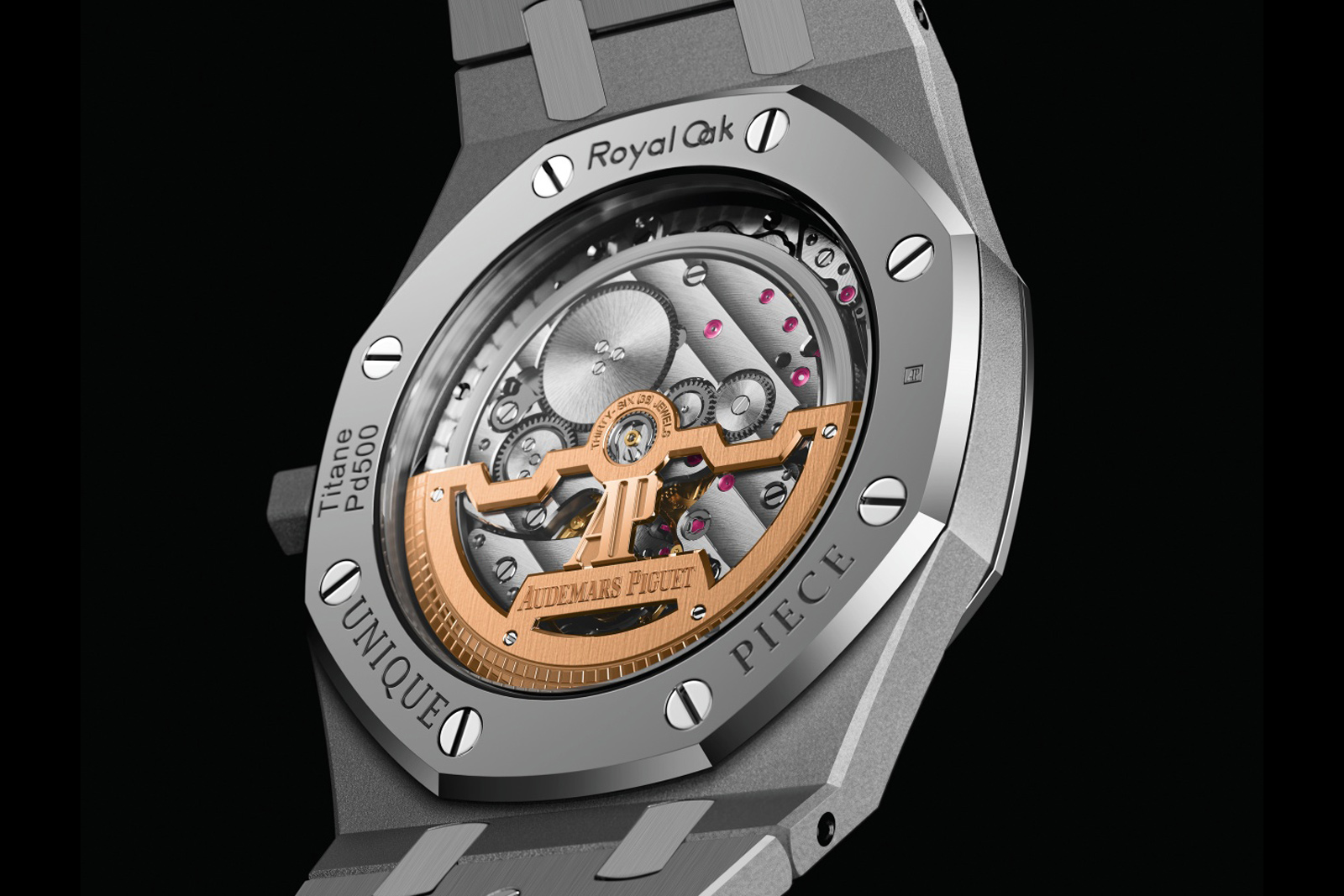 The excellent and long-running cal. 2121