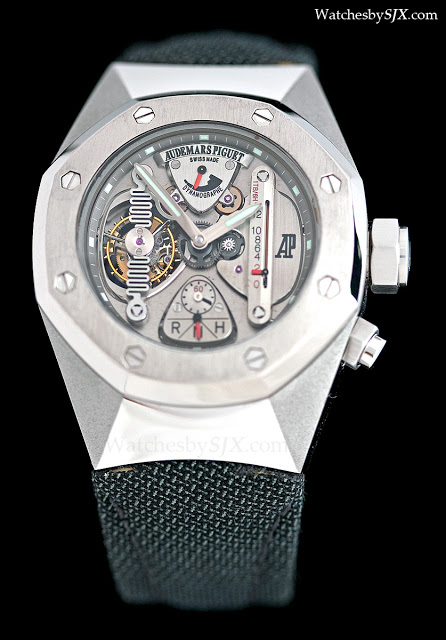 Ten years ago for the 30th anniversary of the Royal Oak, Audemars Piguet unveiled the Royal Oak Concept Watch 1 (CW1). The design of the CW1 was a drastic evolution of the Royal Oak. Also novel was the case material, alacrite 602, a cobalt-based alloy; the bezel is titanium and the strap, kevlar.

But the CW1 was also a dead end in the sense that the rest of the Royal Oak line did not evolve in the same direction. This year is the 40th anniversary of the Royal Oak but the CW1 was never repeated. The larger Royal Oaks in the form of the Offshore now look like the latest Michael Schumacher Offshore, while the classic Jumbo was just reintroduced looking almost exactly like the original 1972 Royal Oak. Alacrite was not used in any other Royal Oak model either. Though AP did introduce two subsequent Royal Oak Concept watches, the Carbon Concept and Concept Tourbillon GMT, neither was quite as distinctive as the original CW1. Made in a limited edition of 150 pieces spread over 2002 till 2004, the CW1 itself is a mighty cool timepiece. Though it measures 44 mm in diameter, similar to an Offshore, it is much longer, and curved, so it only sits well on larger wrists. Inside is the cal. 2896 from Renaud & Papi, which is functionally similar to the movements in several Richard Mille tourbillons. All the bridges and the base plate are titanium. At 12 o’clock is the dynamograph display, which indicates the quality of the torque in the mainspring. Over at three is the linear power reserve indicator. Then at six o’clock is the function selector display – “R” for remontoir (winding), “N” for neutre (neutral) and “H” for heures (hours, or time-setting). The button in the case at four activates the function selector; the crown does not need to be pulled to adjust the time. And at nine is the tourbillon with its eye-catching tourbillon bridge in spark-eroded titanium. Interestingly the finish on the alacrite case and also the bezel is not particularly fine; this is the original factory finish of the watch. The transition between mirror polished and sandblasted front of the case is not sharply defined. And the titanium bezel is not superbly finished either; notice the grain of the metal in the mirror polished bezel edge and the fairly rough brushed top. This CW1 has been worn regularly by its owner since it was purchased shortly after the launch. Signs of wear are very obvious, and the movement is not as clean as it was when new. The owner, however, is extremely pleased with this watch. The original retail price was about CHF250,000, and it sells for approximately the same on the secondary market today, which is unusual for a high complication. That is probably attributable to its unique characteristics in design, complication and material; there has not been another Royal Oak like it. – SJX