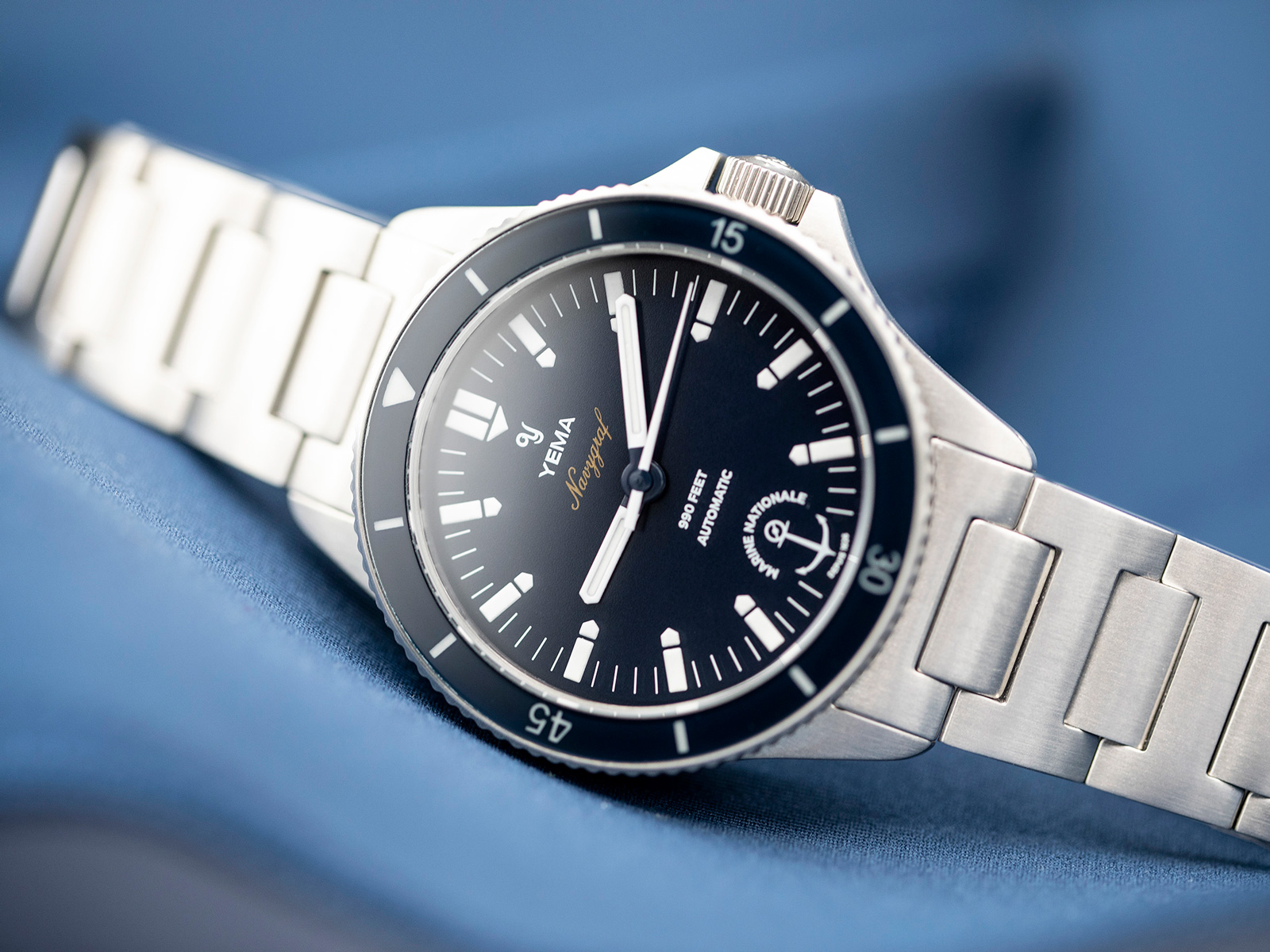 Established in 1948,  Yema was once a French watchmaking giant, having equipped the French Air Force and the first French astronaut, Jean-Loup Chrétien. It entered a long decline in the aftermath of the Quartz Crisis, but was revived under its current French owners who took over in 2009.

Now Yema is once again making tool watches for professionals in a tie up with the French Navy, or Marine Nationale. A collection of dive watches “jointly designed with French Navy personnel for marine professionals”, the Navygraf X Marine Nationale is led by a time-only, automatic dive watch, as well as a variant with a GMT function. It also includes a less expensive quartz model and a ladies version, though they will not be covered here. 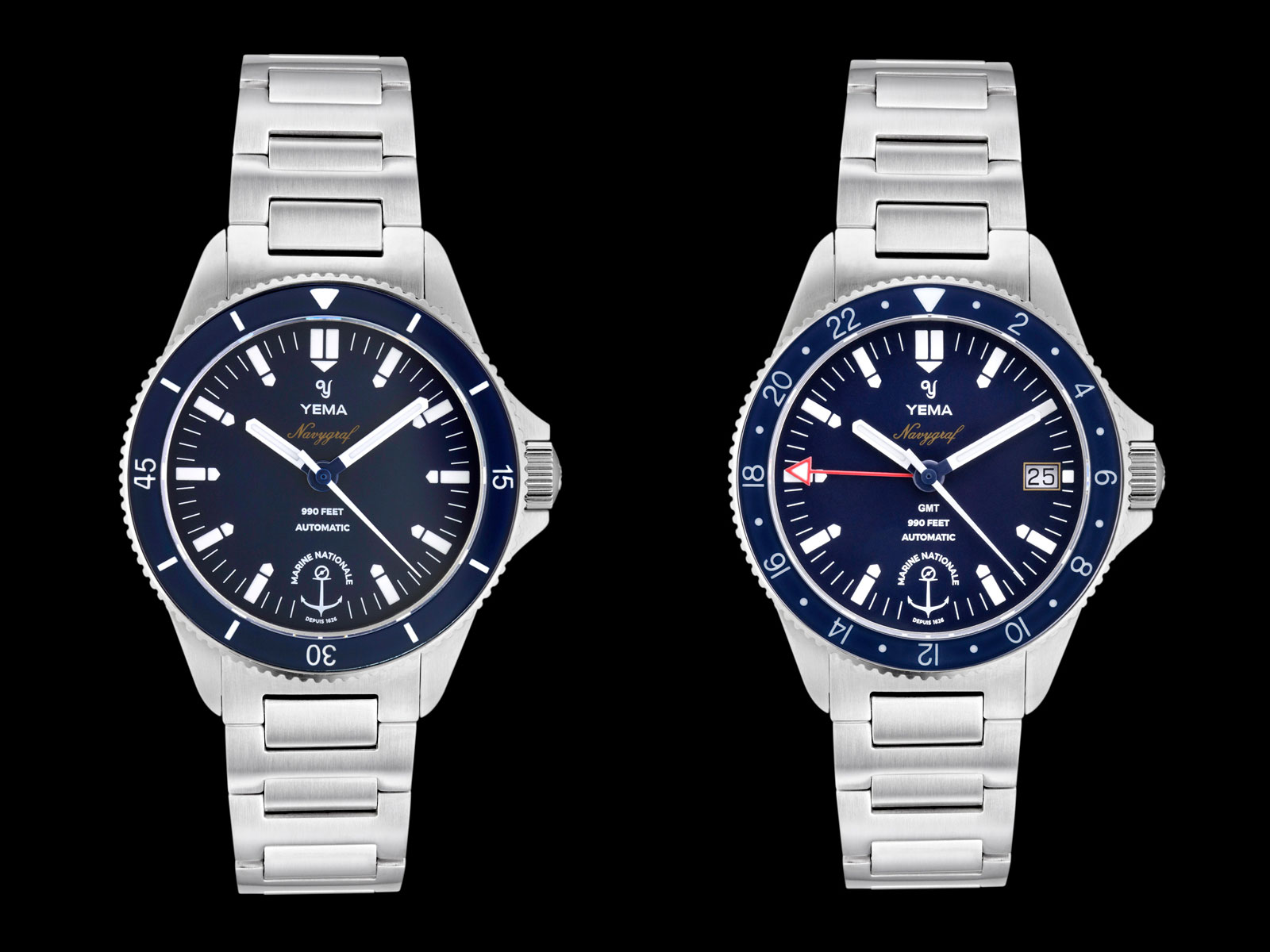 Along with fellow French brand Baltic, Yema is one of my favourite brands at the US$1,000 price point. Its watches are well designed and executed for the price, often offering strong value.

Given Yema’s historical relationship with the French military – the brand supplied watches to French air force helicopter pilots in the 1970s – Yema has legitimacy in military watches, and its collaboration with the navy makes sense. 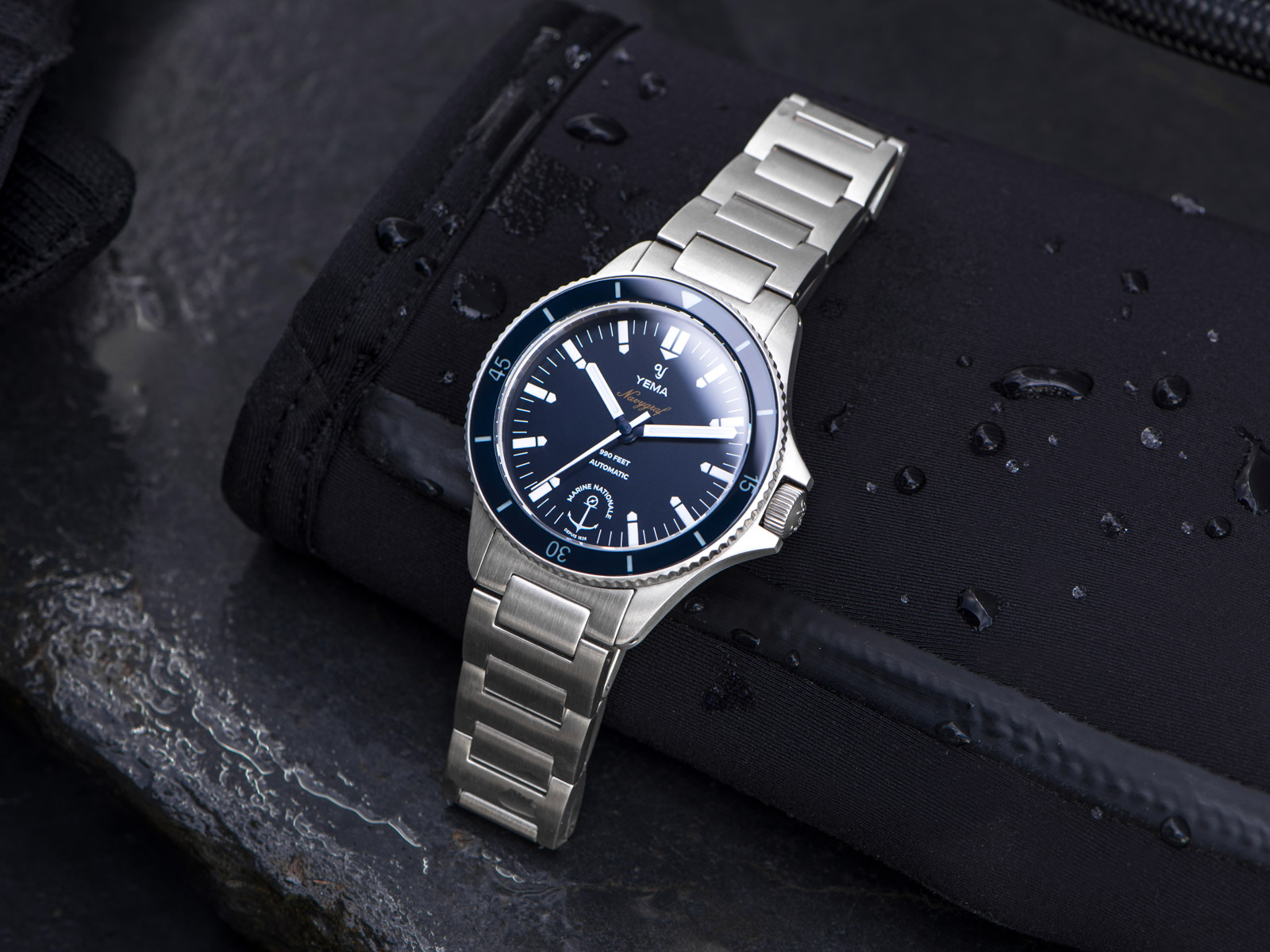 The white and blue combination – a nautical palette modelled on the emblem of the French Navy – is familiar but stands out on the wrist, being immediately reminiscent of the oceans. The maritime theme of the symmetrical and legible dial is reinforced by the Marine Nationale logo at six. In addition, the model name in gold italic script adds a dash of richness to an otherwise functional dial.

Unlike most other watches at this price point that use an off-the-shelf movement, Yema equips the Navygraf with a proprietary calibre developed by its parent company, Montres Ambre, which owns several French watch brands.

According to Yema, the movement is assembled in France, presumably from imported components since France lacks a substantial watchmaking supplier network. Though details on the movement are thin, it is likely similar in architecture to one of the common ETA calibres. 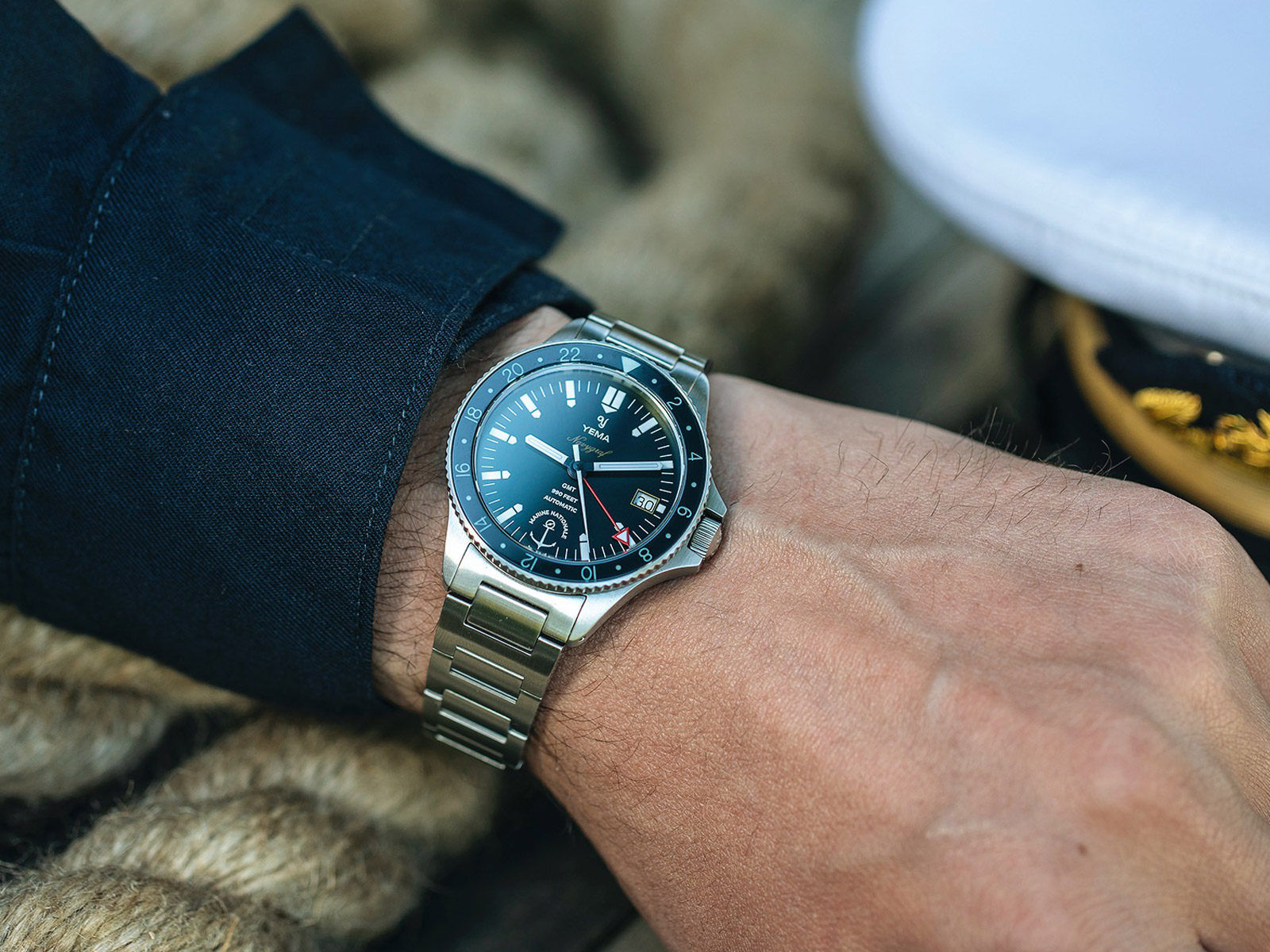 At 39 mm wide, the Navygraf X Marine Nationale is a great option for those looking for a compact dive watch for everyday wear. In fact, it’s similar in both look and proportion to the much-lauded Tudor Black Bay 58 Navy Blue, though at a significantly lower price point as a result of the simpler construction and finish. At just US$790 for the time-only version and US$1,049 for the GMT, the Navygraf models are great value propositions.

The “Marine Nationale” dial features indices shaped like exclamation marks, an unusual feature inspired by Navygraf of the 1970s. Its vintage inspiration extends to the sapphire-covered bezel that’s meant to evoke the glossy bakelite bezels found on the vintage originals. 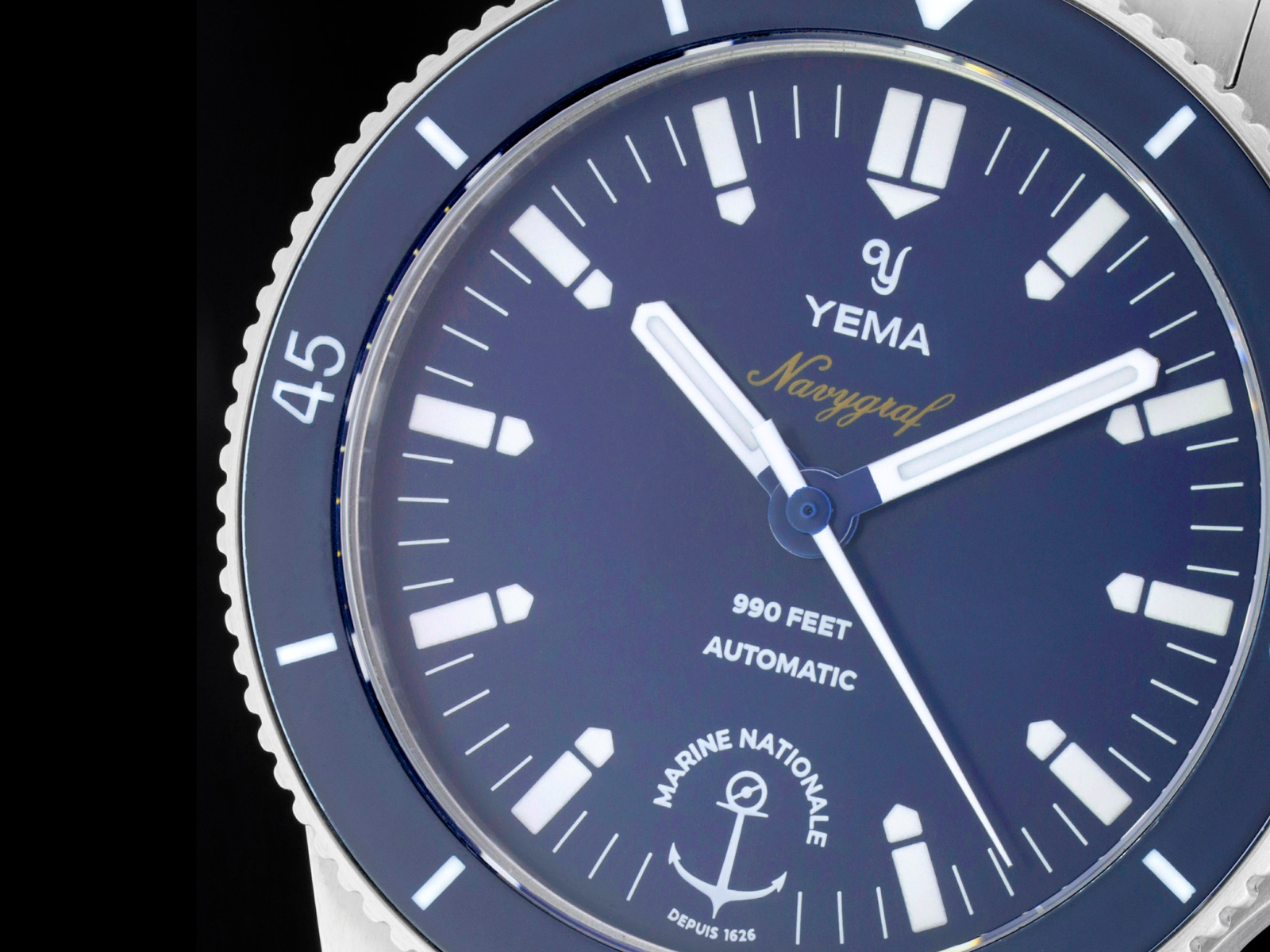 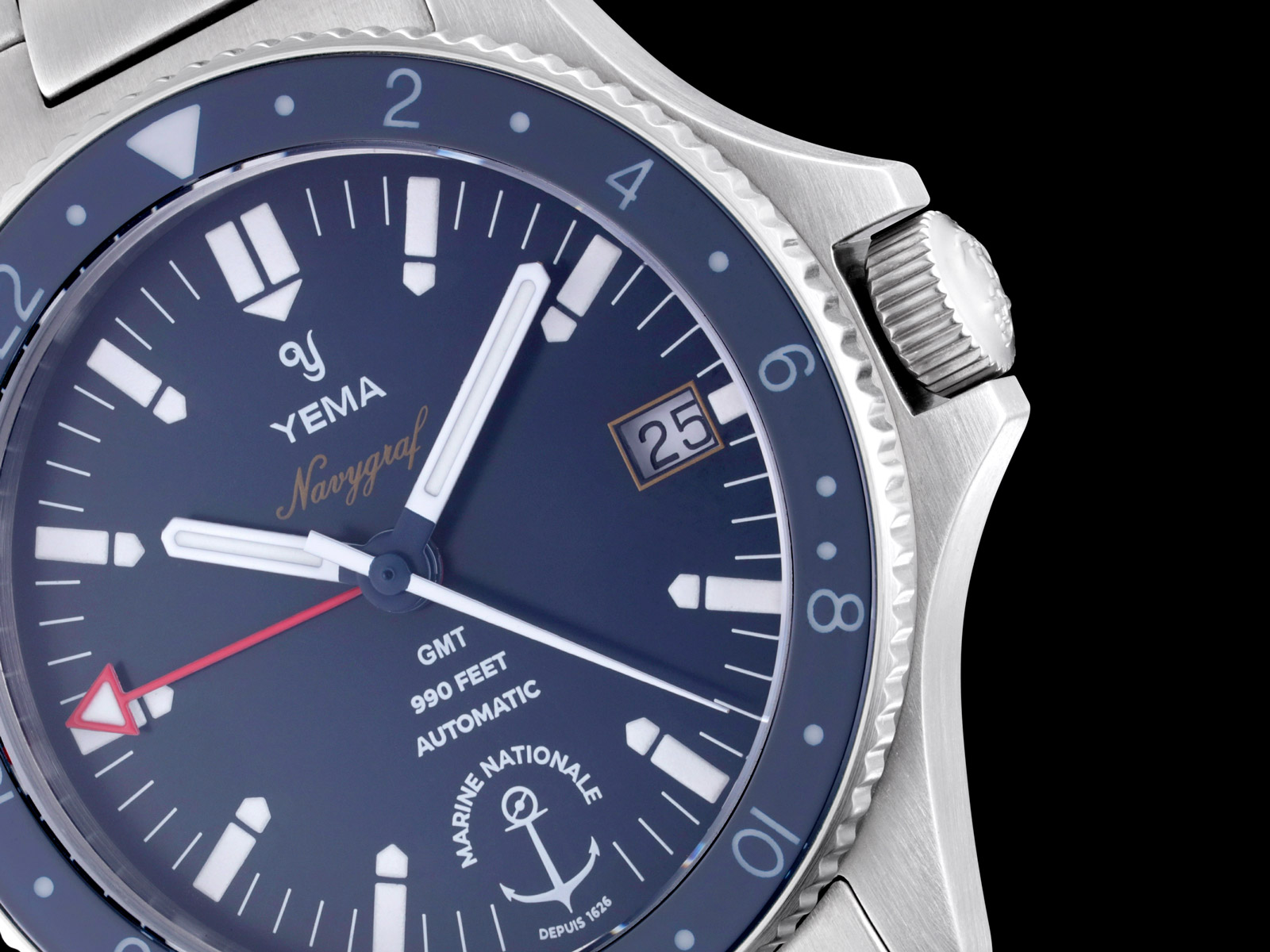 While the GMT features a 24-hour bezel

Simple in form, the case is stamped and brushed on all surfaces. Like most dive watches, it has guards to protect the crown from impacts that may cause water to penetrate the case. 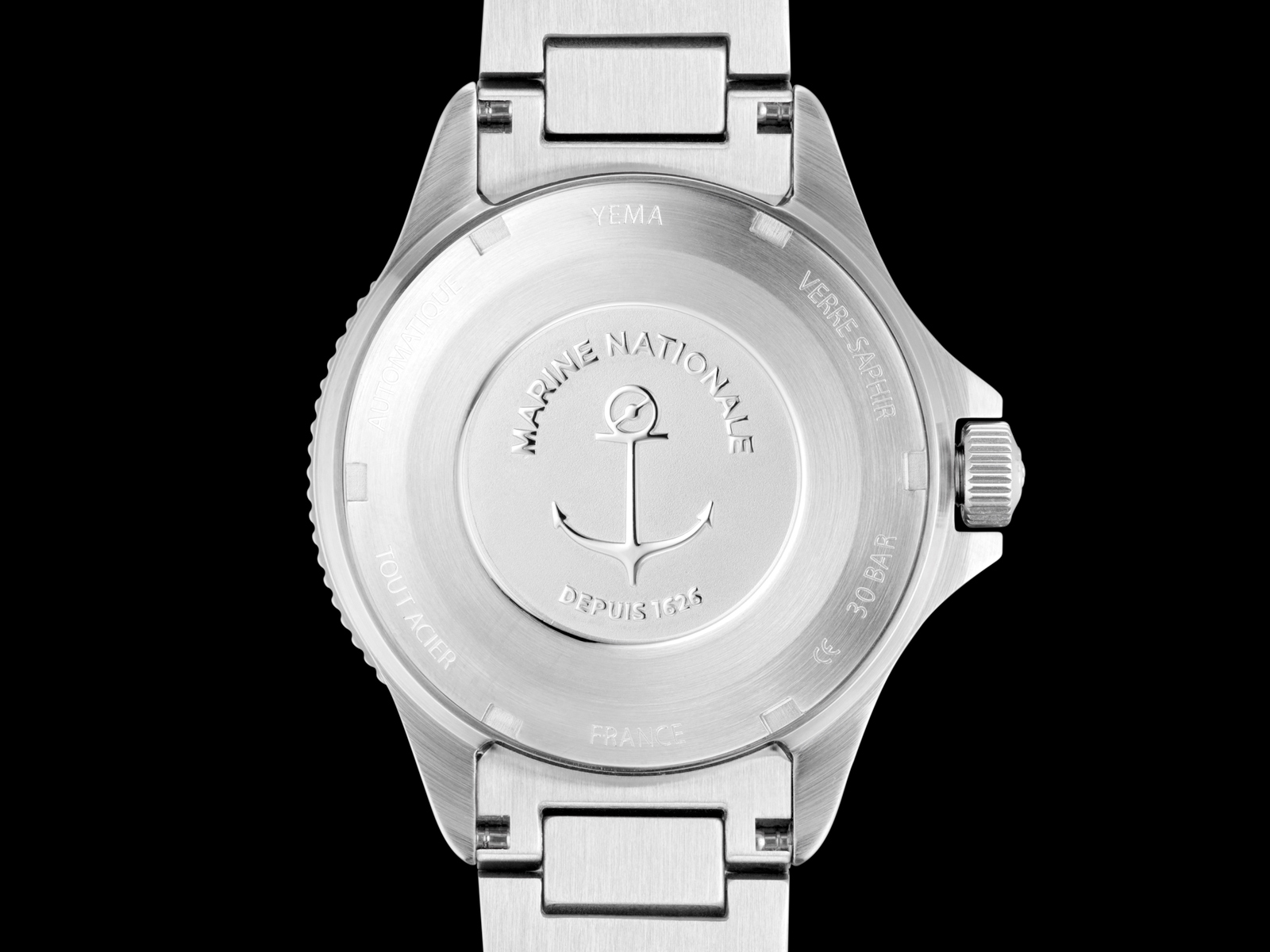 The YEMA2000 movement powers the time-only Navygraf, while the YEMA3000 – essentially the same movement but with a GMT mechanism – is found in the GMT. The movements are regulated to within 10 seconds per day and have a power reserve of 42 hours.

Limited Edition: Time-only is regular production, while GMT is limited to 1000 pieces

Availability: Direct from Yema online
Price: US$790 for time-only, and US$1,049 for GMT

Correction May 13, 2021: The YEMA2000 and YEMA3000 movements are proprietary, but not manufactured in house as stated in an earlier version of the article. Instead, they are assembled by Yema’s parent company in France using imported components.