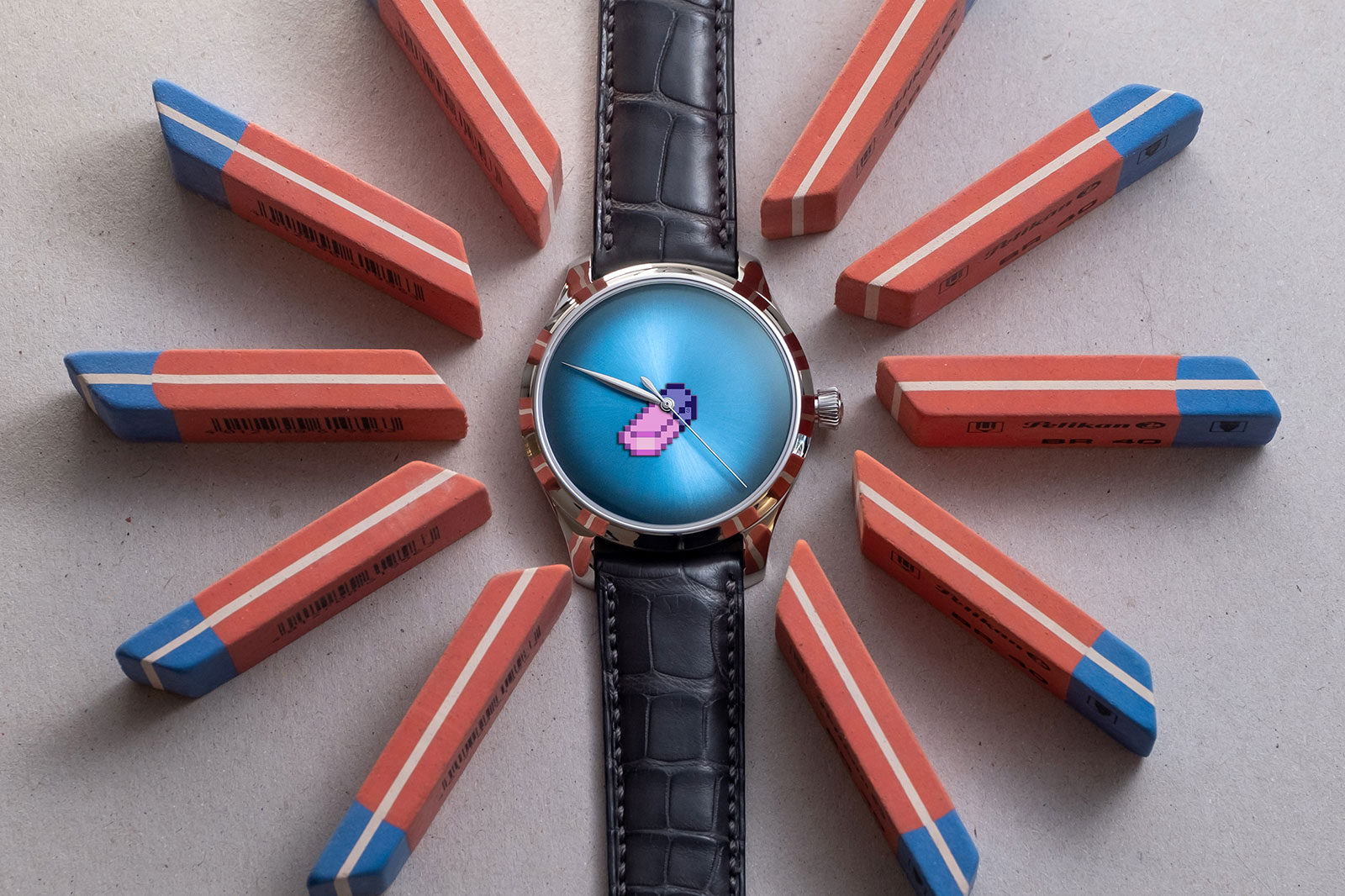 A limited-edition collaboration with Parisian artist Romaric Andre, who specialises in modifying watches as Seconde/Seconde/, the new watch reimagines the brand’s signature time-only watch by replacing the traditional hour hand with a pixellated eraser – a tongue-in-cheek reference to Moser’s “concept” dials that forgo the brand’s logo. 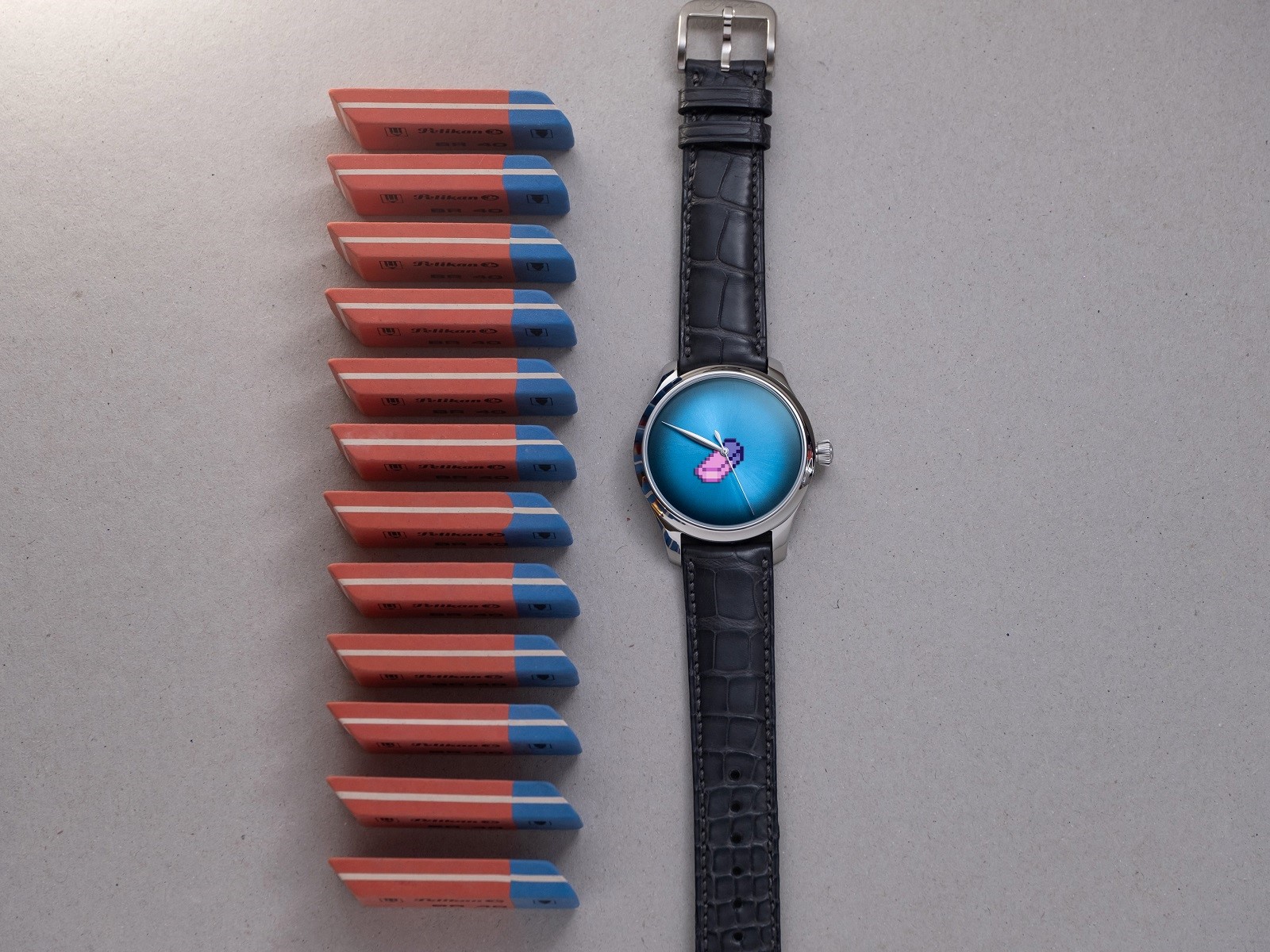 When I first saw the press release for the new watch, I did a double take – was it an April Fool’s gag? The watch is funny and out there, and something only Moser could pull off successfully.

Being family-owned – with young, open-minded leaders – Moser can be adventurous than its peers. The Seconde/Seconde/ collaboration is Moser doing what it does well. In fact, Moser’s strength is obvious despite the “erased” logo – the watch is instantly recognisable as a Moser. 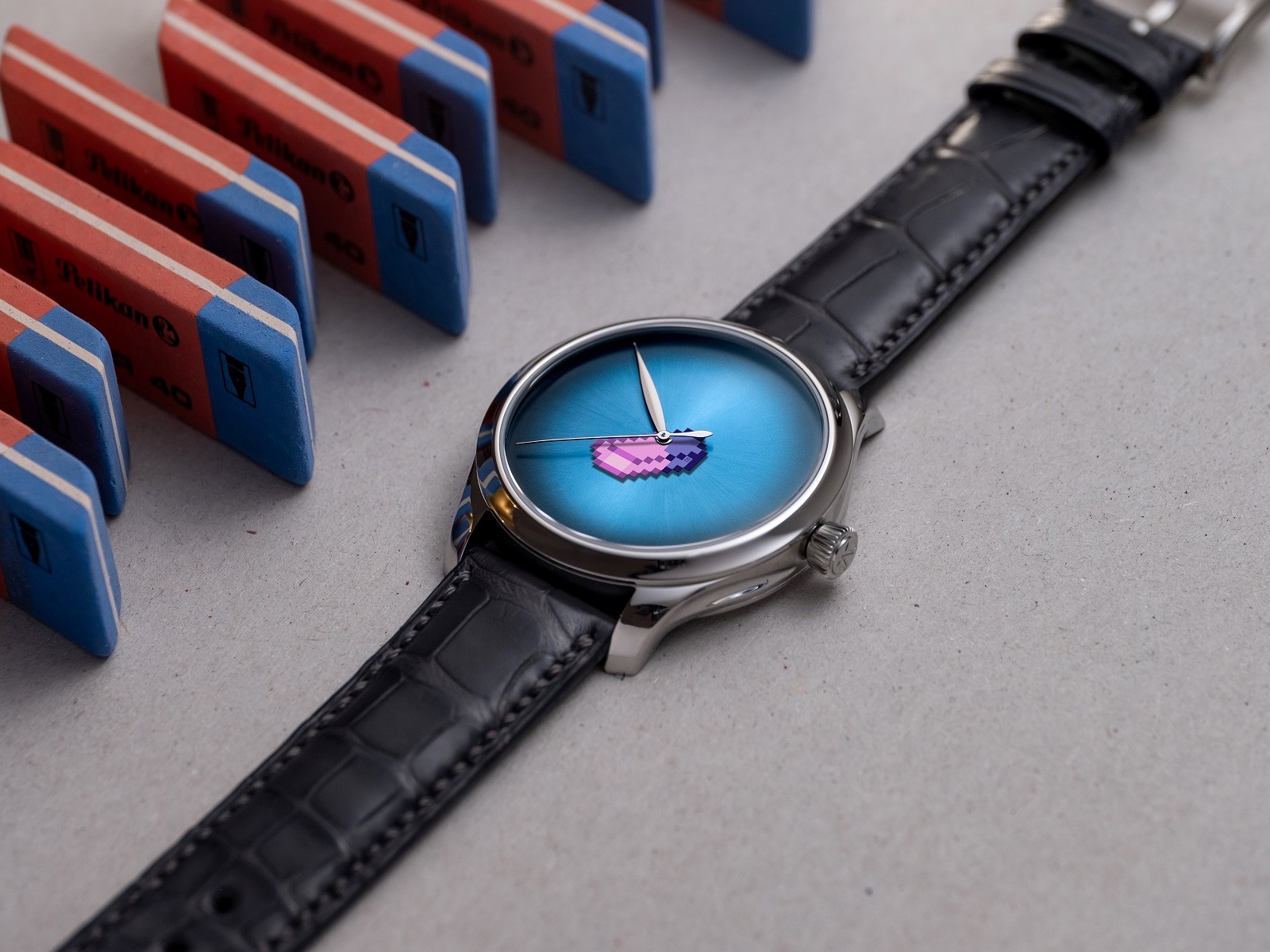 I’ve always liked Moser’s whimsical offerings, such as the Apple Watch-esque Swiss Alps Final Upgrade, and now the Endeavour Centre Seconds X Seconde/Seconde/. These watches have an undeniable fun factor rarely seen in haute horlogerie, which endows the watch with a playful charm. It’s an atypical watch that is typical of the brand.

At US$21,900, it’s priced identically to the standard Endeavour Centre Seconds in gold; this, however, has a steel case. That diminishes its value proposition somewhat, though steel is still a fashionable material for limited editions, which will make it more alluring for some collectors.

With both sharing “a taste for the unexpected”, H. Moser & Cie. and Seconde/Seconde/ are a natural fit. Known for modifying vintage timepieces by installing quirky, cartoonish hands, Mr Andre has done the same here: the traditional hour hand is now a pink-and-purple eraser. “A metaphor for removal and for minimalism” according to Mr Andre, the new hour hand is a reference to clean dial, something the brand debuted for its concept watches in 2015. It is also symbolic of “constant striving effort” says Mr Andre, as one often has to erase past attempts in creative endeavours, in say, designing a new watch, before arriving at the final work.

Each watch will be accompanied by a numbered artwork by Seconde/Seconde/ with “Less is more” written by hand on its lower corner, a nod to Moser’s watchmaking. Beneath the hood beats the in-house cal. HMC 200. The calibre utilises a proprietary Straumann hairspring manufactured by the brand’s sister company, Precision Engineering, and boasts a handy three days of power reserve.

In addition, the rotor is 18k solid gold, with the movement featuring Moser’s signature alternating wide and narrow Geneva stripes, as well as the trademark V-shaped balance bridge.