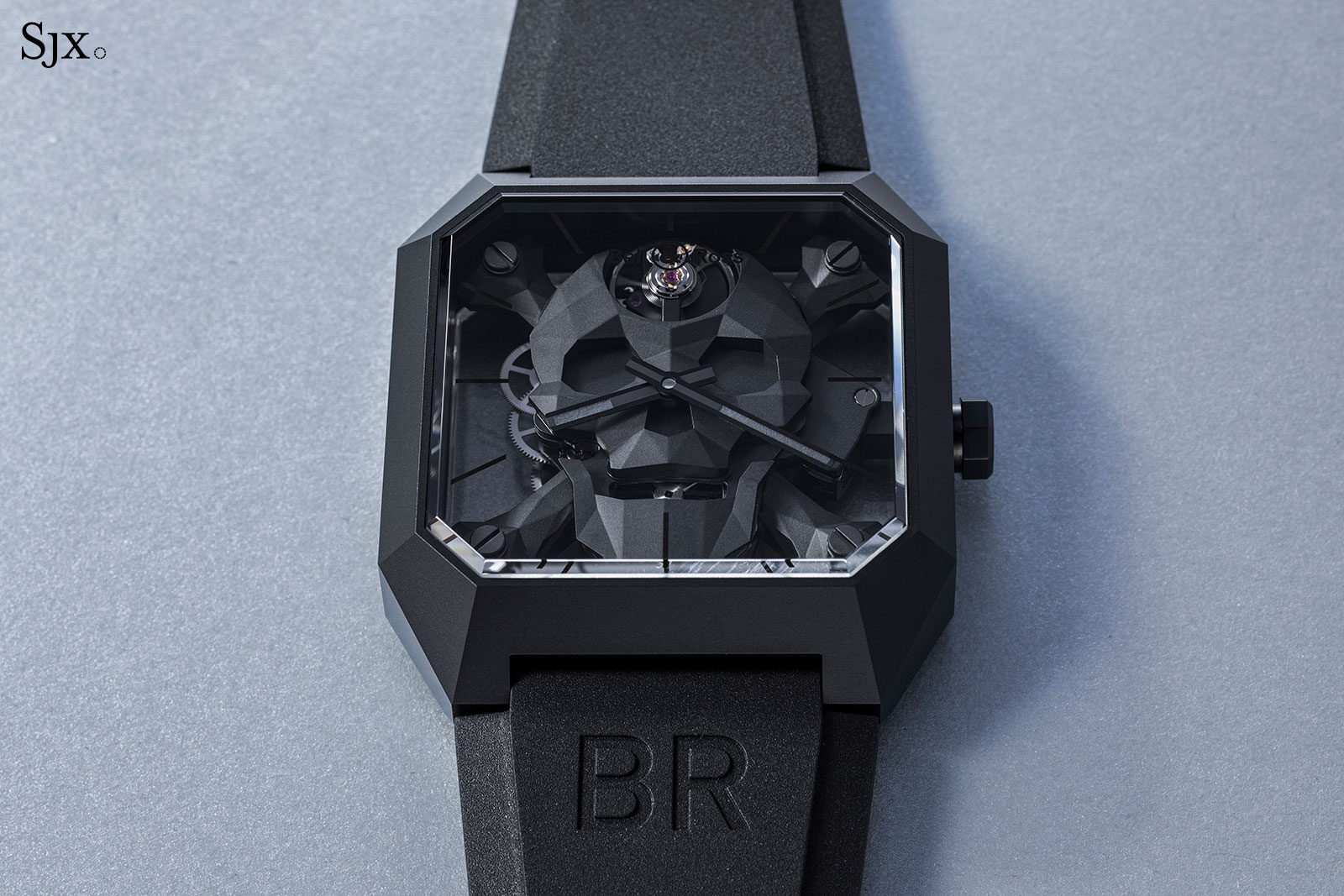 Bell & Ross (B&R) got its start in 1992 with no-nonsense watches – it produced watches for French military and police units like GIGN and RAID – but has since broadened its repertoire by tapping sci-fi and military concepts and applying them in a more creative manner, resulting in watches like last year’s that had a dial resembling a fighter jet’s head-up display.

The BR 01 Cyber Skull draws on a theme that’s familiar to B&R. A recurring element in B&R’s line up for over a decade – its first skull watch arrived in 2009, well before such watches became a fad – the skull motif was inspired by military emblems, often those of airborne units. But while the theme is similar, the Cyber Skull is in many ways a culmination of the idea, having been improved technically and refined aesthetically.

Best described as a sci-fi interpretation of the vanitas, the Cyber Skull has both its case and dial in black ceramic, while being powered by a proprietary movement featuring an automation that opens and closes the skull’s jaws when the movement is wound. 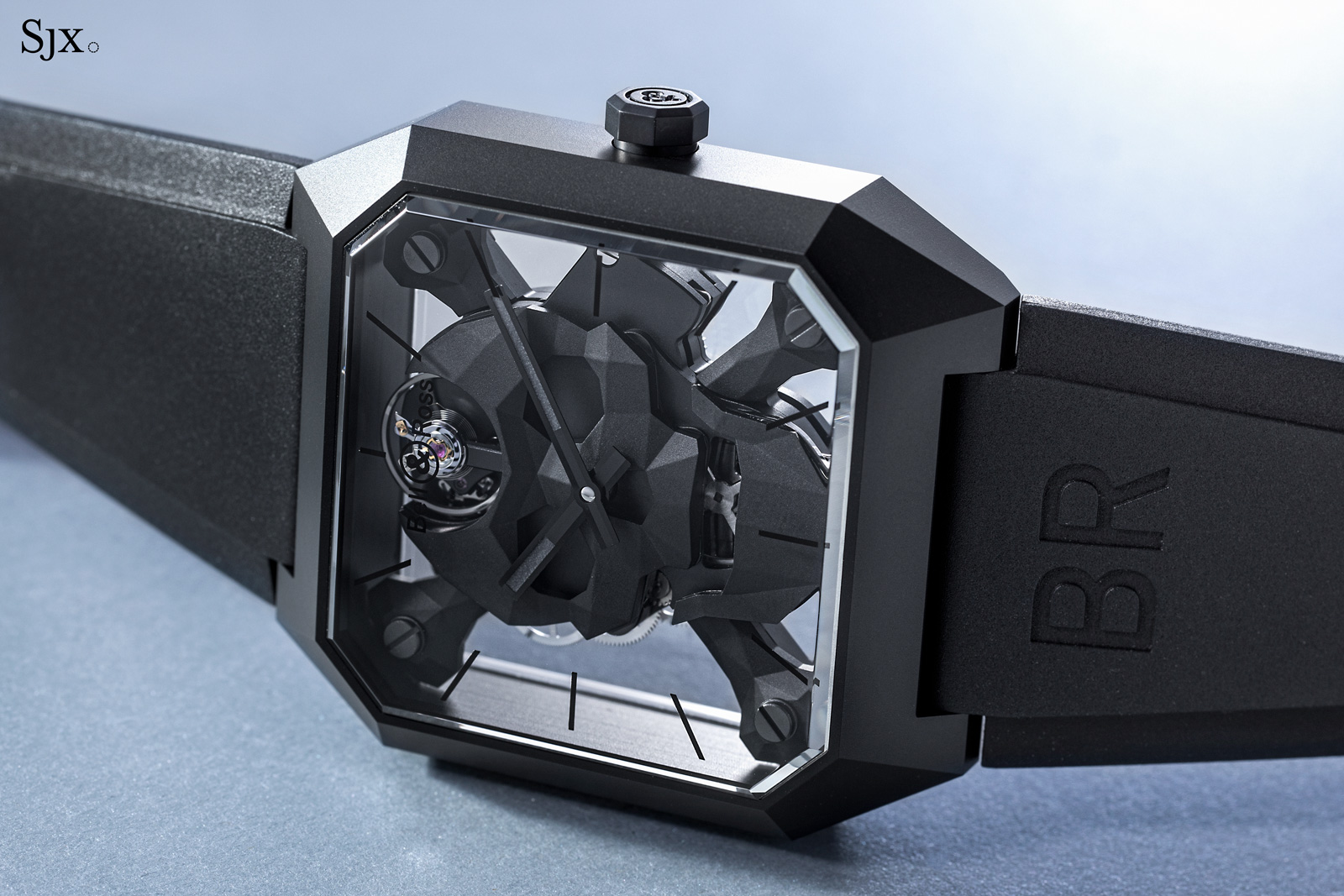 A complete package in terms of construction and technical finesse at its price point, the Cyber Skull is more accomplished than the typical B&R watch (though it does cost more than the typical B&R). Almost all components were developed for the watch, from the case to the dial to the movement.

The Cyber Skull’s design is original, despite the skull being somewhat fashionable in watches today. Essentially a futuristic vision of the signature square B&R case, the Cyber Skull has an ultra-modern, polygonal look brings to mind a digital villain in a sci-fi movie, setting it apart from most skull watches that are usually inclined towards a classical (but sometimes still extravagant) style. 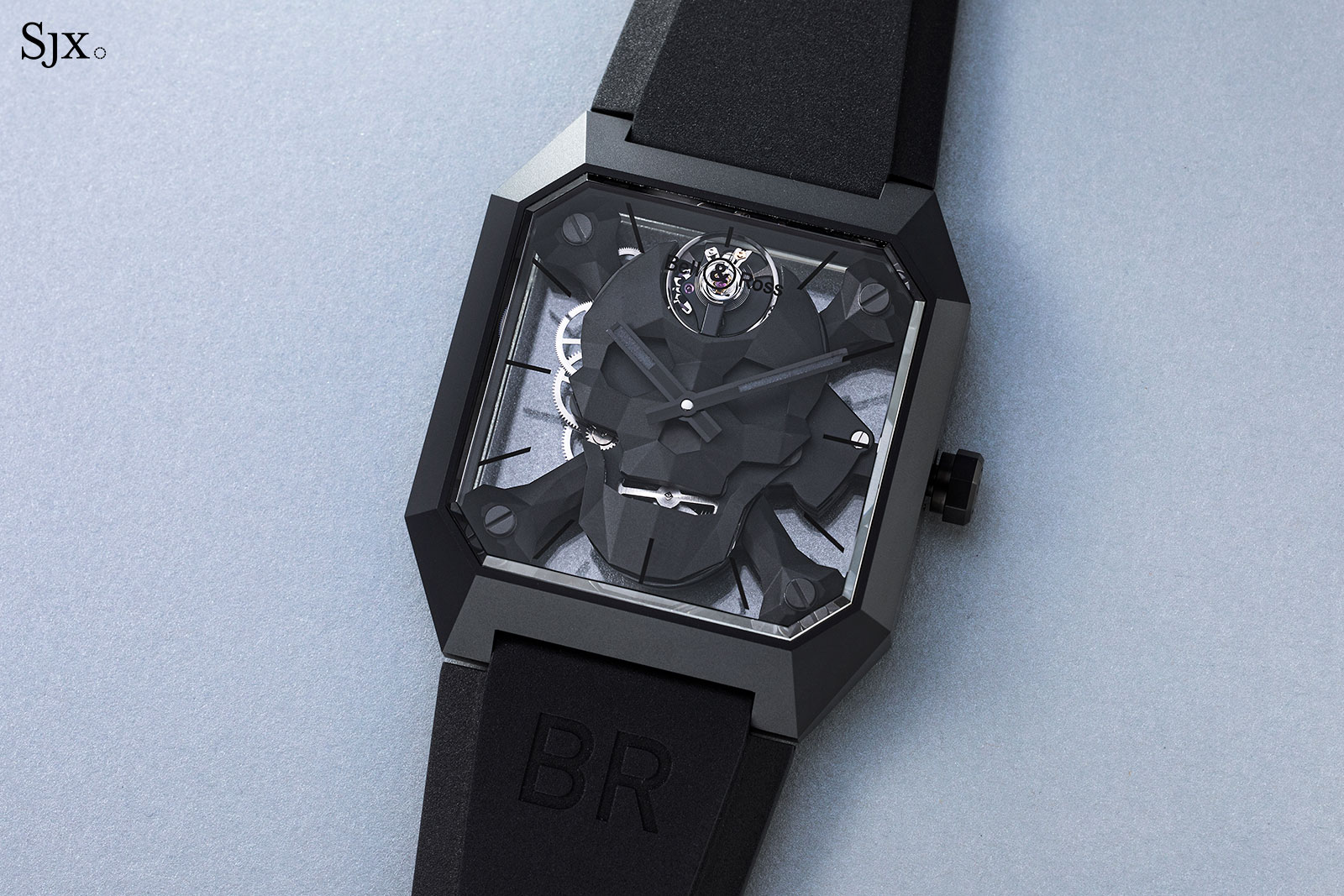 In keeping with the design, the Cyber Skull is a large watch. The size is probably ideal for the style – it would lose some of its visual appeal if done on a smaller scale.

The diameter is 46.5 mm, but it wears slightly smaller, because of the very short lugs. It wears well for a watch of this size – it is not overly heavy – though the shape does leave it feeling chunky. 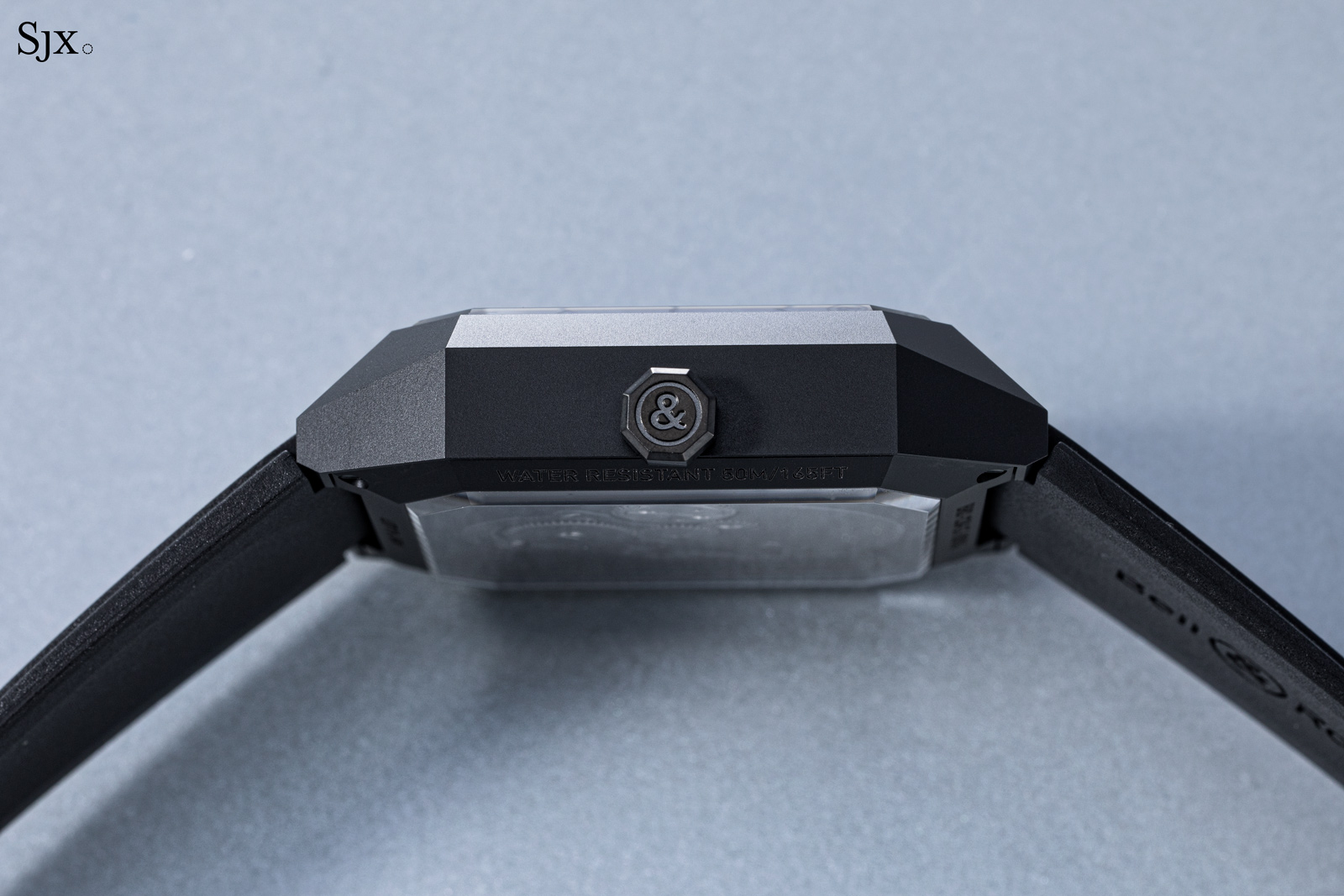 But the Cyber Skull is more than just a modern-day memento mori; it’s also about materials and mechanics. Matching the polygonal style of the skull, the case made up of multiple facets and sharp edges, which is unusual for a ceramic case. And the skull itself is also ceramic, and similarly well executed.

The movement is proprietary, having been developed for B&R by movement maker Concepto. Notably, it’s a form movement – meaning it’s not conventionally round – and the base plate traces the outline of a skull.

The Cyber Skull is one of the costlier watches in B&R’s catalogue, but is priced fairly as such things go. Combining a proprietary form movement with an automaton and a sharply constructed ceramic case, the Cyber Skull offers a lot more than most B&R watches. More importantly, it’s also an unusual proposition at its price point – there is nothing much else like it. 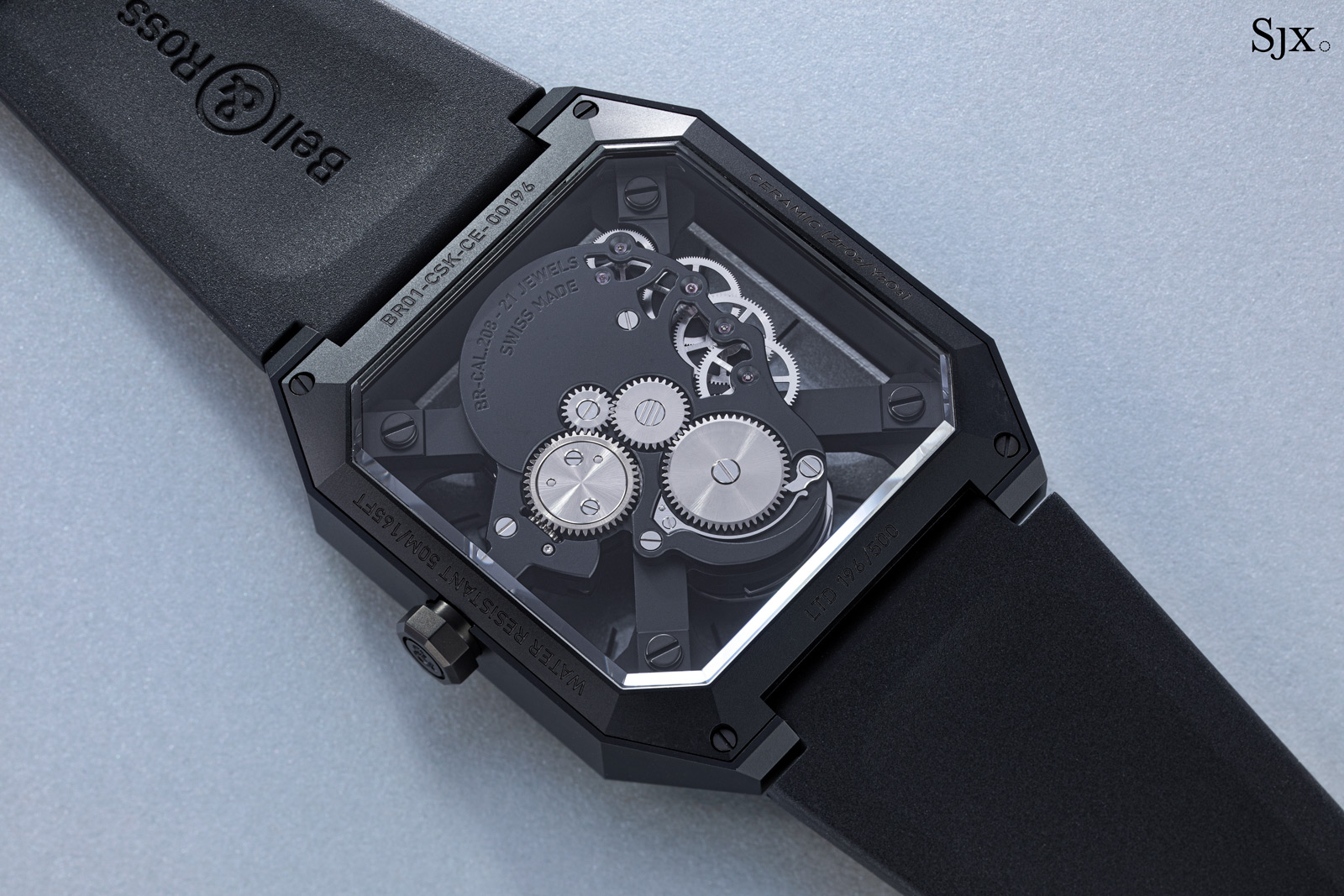 Unlike the brand’s earlier skull watches, the Cyber Skull is monochromatic and minimalist, characterised by sleek, clean lines, very much in contrast to most modern-day skull watches that tend to be exuberant in style and colour, especially those inspired by Mexico’s Day of the Dead.

As a result, the Cyber Skull has a cold, slightly digital appearance that befits the sci-fi theme. With its dial open worked as much as possible – most of the moving parts are clustered under the skull – the empty space within the case creates the optical illusion of a floating skull and crossbones. 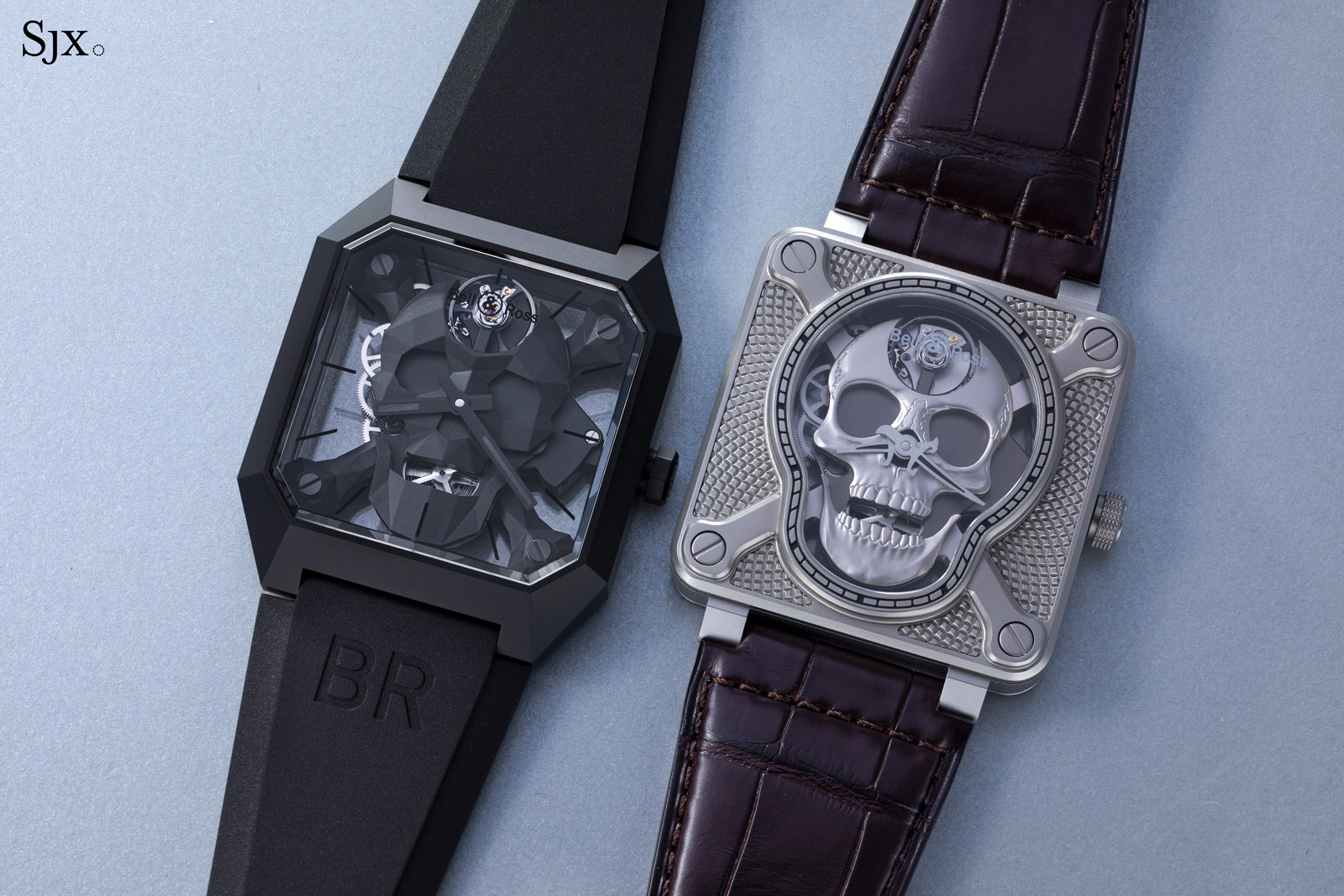 While simple in form – made up of a skull and a cross – the dial is peppered with interesting details that can be discerned only up close due to the all-black finish.

The skull and crossbones are matte black ceramic, which makes them seem flat at a distance. But they are actually three-dimensional, and comprised almost entirely of polygons. The facetted surface of the ceramic parts give the dial depth. Despite being matte, the ceramic does reflect light ever so slightly, revealing the many surfaces of the skull. 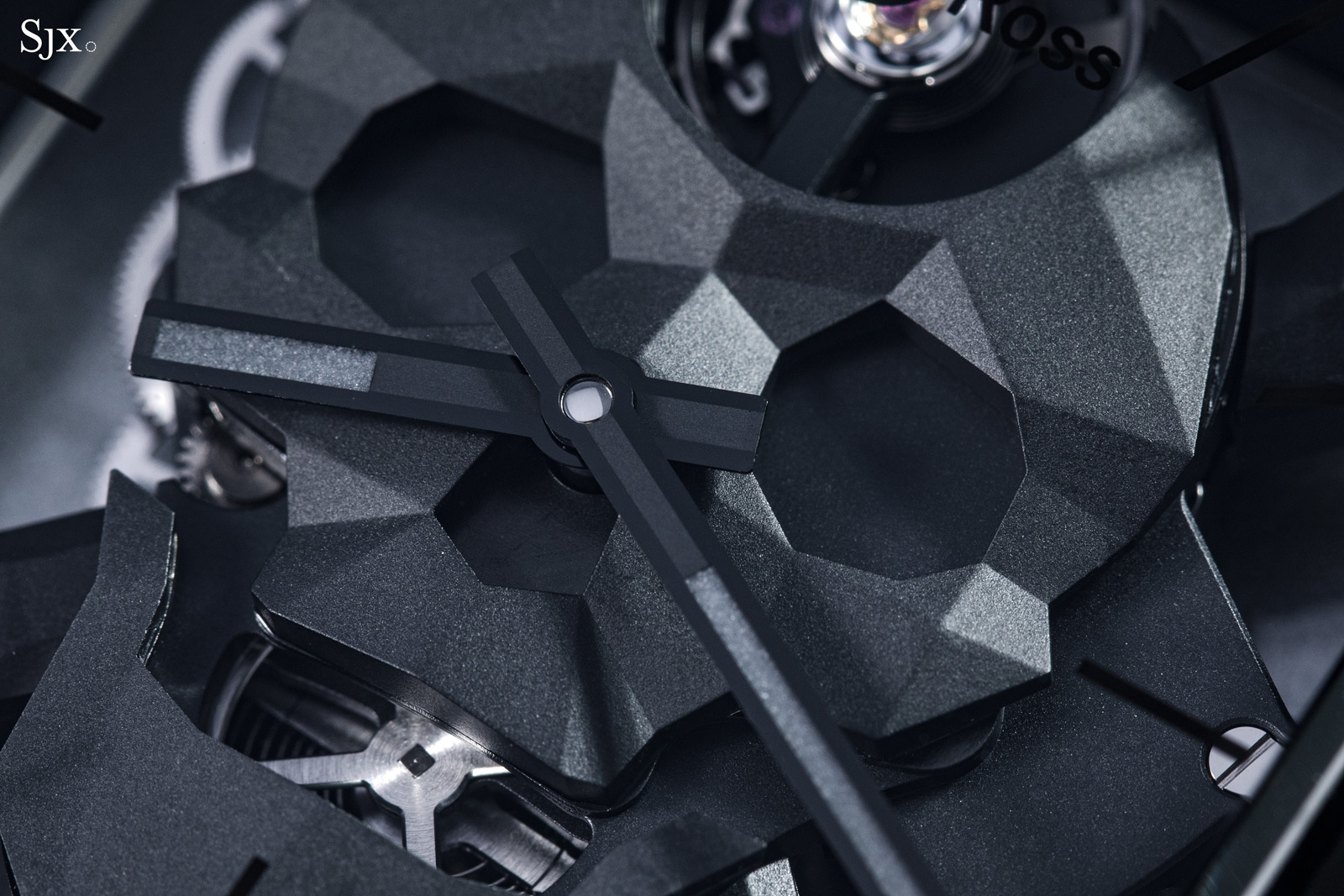 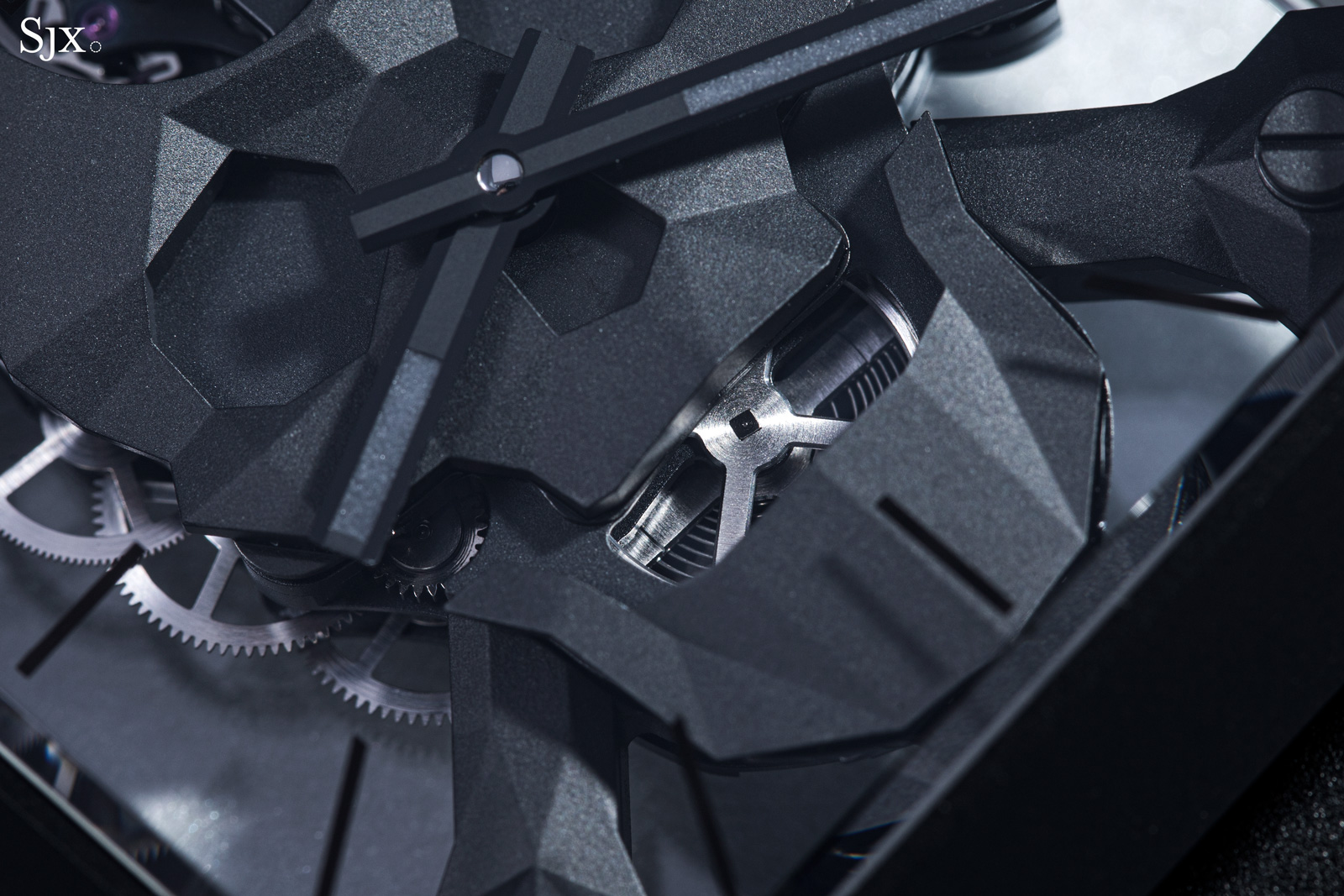 All of the ceramic dial parts are precisely shaped, with well-defined planes and clean edges. Even though they are sandblasted, the numerous facets are effective in creating a textured look rendered in shades of grey. Alternating brushed and polished surfaces would have taken the dial to a whole new level, but would likely elevate the price beyond reason.

Around the ceramic skull, hints of the mechanical workings are visible. The wheels of the going train are on the left of the skull, while the mainspring is visible between the jaws. The open-close motion of the jaws while winding allow the mainspring to double up as a power reserve indicator, revealing the state of wind. 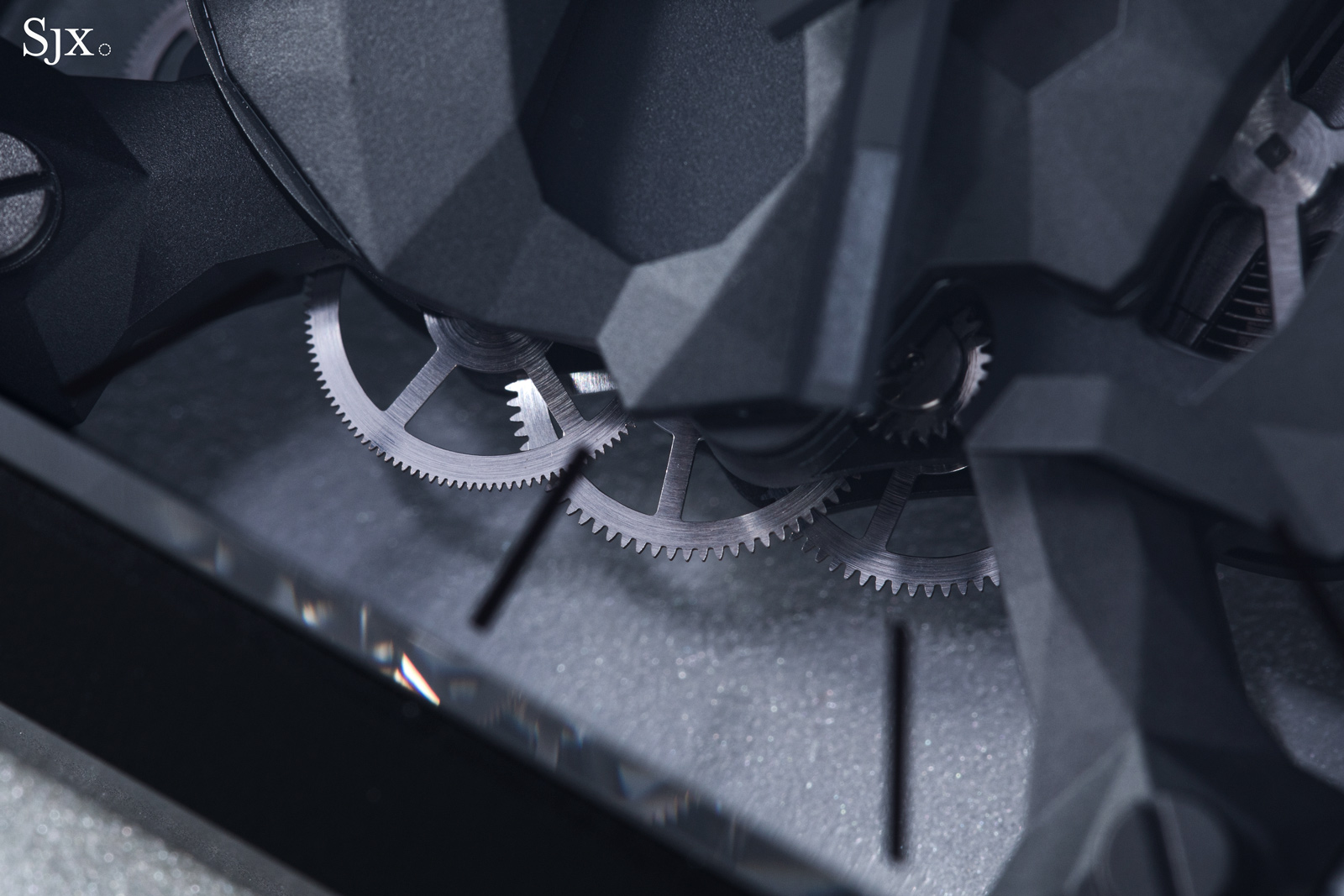 The gears of the wheel train 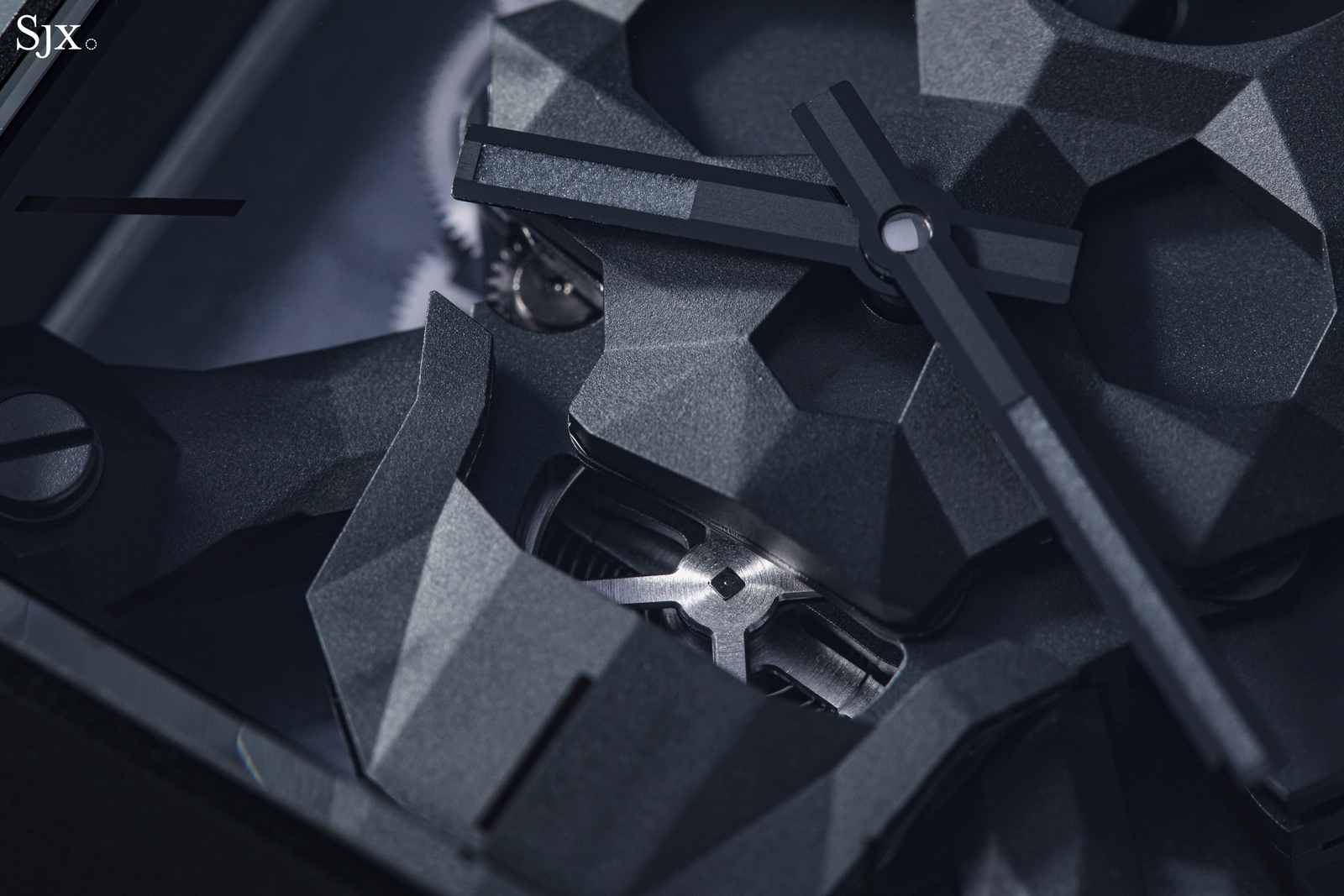 The mainspring is visible through the open barrel

However, a personal gripe is the exposed balance at 12 o’clock. While the oscillation of the balance is fascinating – and also the swinging of the pallet lever – it looks a little out of place against the ceramic skull and bones. While the ceramic parts are clearly 22nd century, the Etachron regulator is definitely 20th century. I would have preferred a full forehead for the skull, perhaps with a small aperture just to show the pivot jewel for the balance staff. 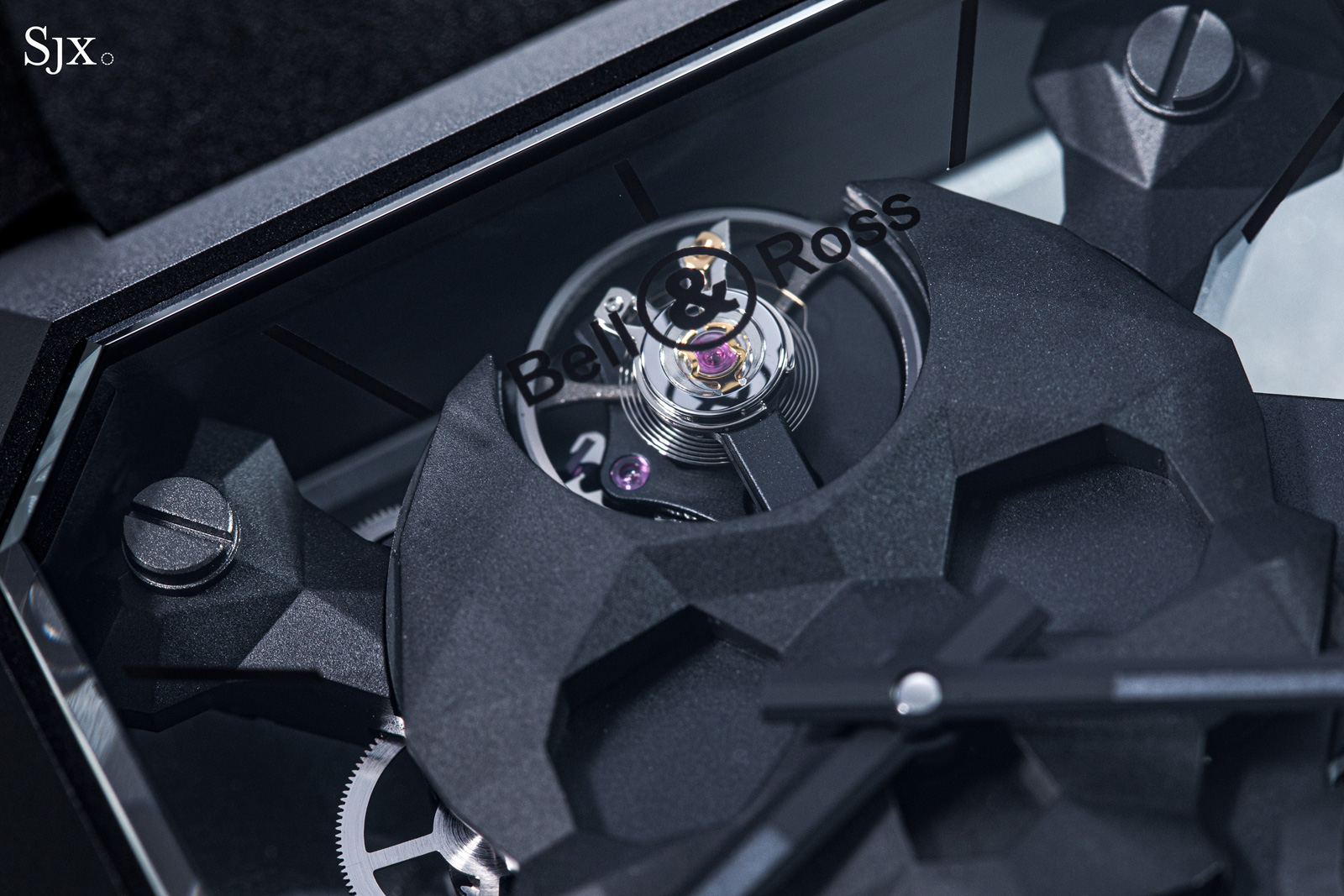 Importantly, the hands don’t get in the way of the skull. Done in a plain baton shape, the hands recede into the background (allowing them to avoid looking like a moustache at certain times).

They are filled with black Super-Luminova that’s a dark grey (and almost black at some angles) during the day, but glows green in the dark, though less brightly than conventional luminescent paint.

Surprisingly, legibility is good enough during the day. The hands are a dark shade than the ceramic skull, which allows them to stand out. That said, B&R makes plenty of ultra-legible, fuss-free aviator’s watches, and this is most definitely not one of them. 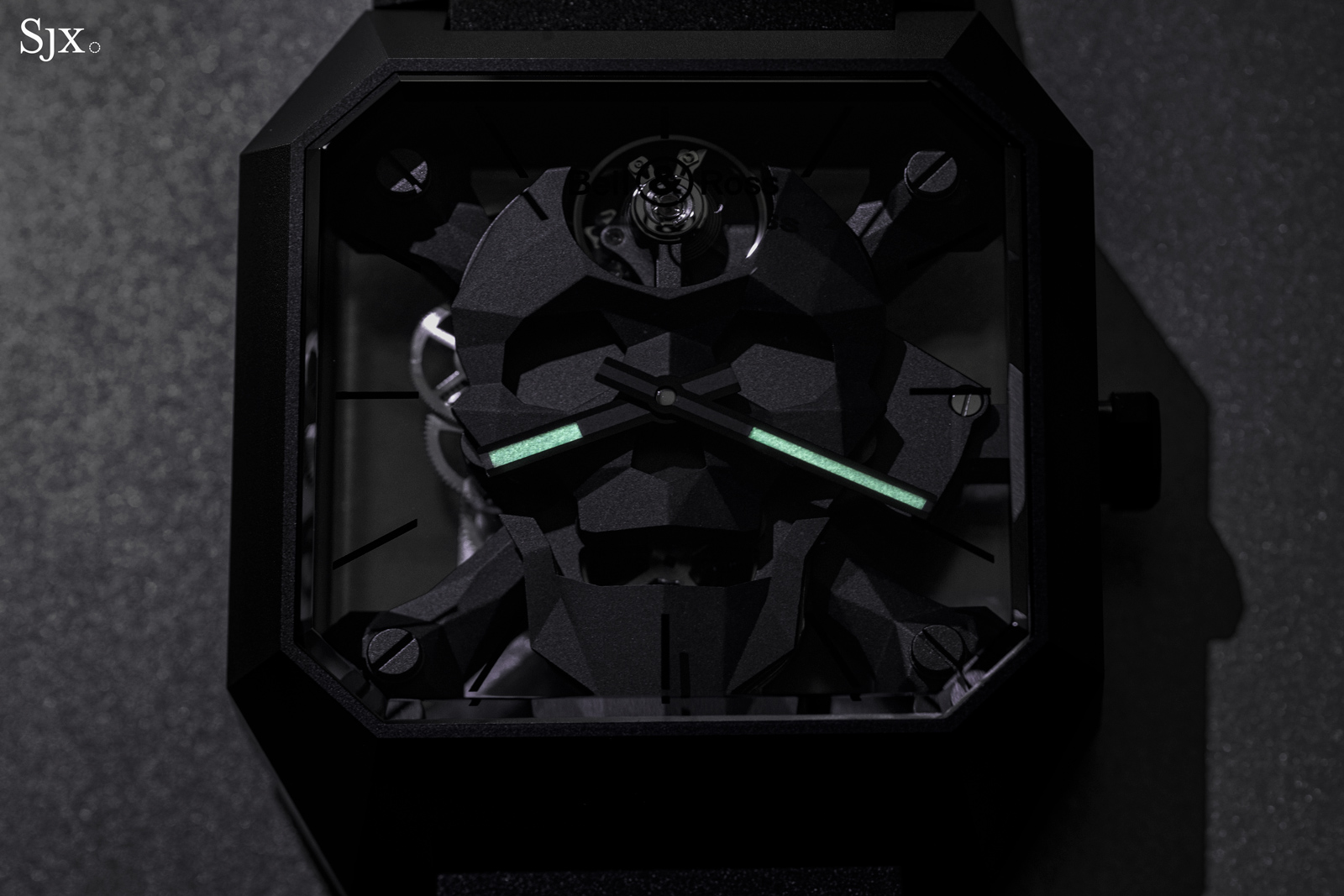 The hands glow green at night

Derived from the square case that’s the quintessential B&R shape – the form was inspired by cockpit instruments in jet fighters – the Cyber Skull retains the same outline but is composed of polygonal surfaces that echo the style of the skull.

Notably, its case is one of the few in ceramic that are angular with pronounced facets. Most ceramic cases tend to have softer lines, which are easier to produce. The precise angles and lines of the Cyber Skull case are impressive. Each corner of the case, for instance, is made up of four flat surfaces that converge on a single point.

Having no bezel, the case ends in a narrow step before the thick sapphire crystal with a facetted border that continues the facets of the case. It’s an attractive look, though the height of the crystal will probably make it prone to chips on its edges. 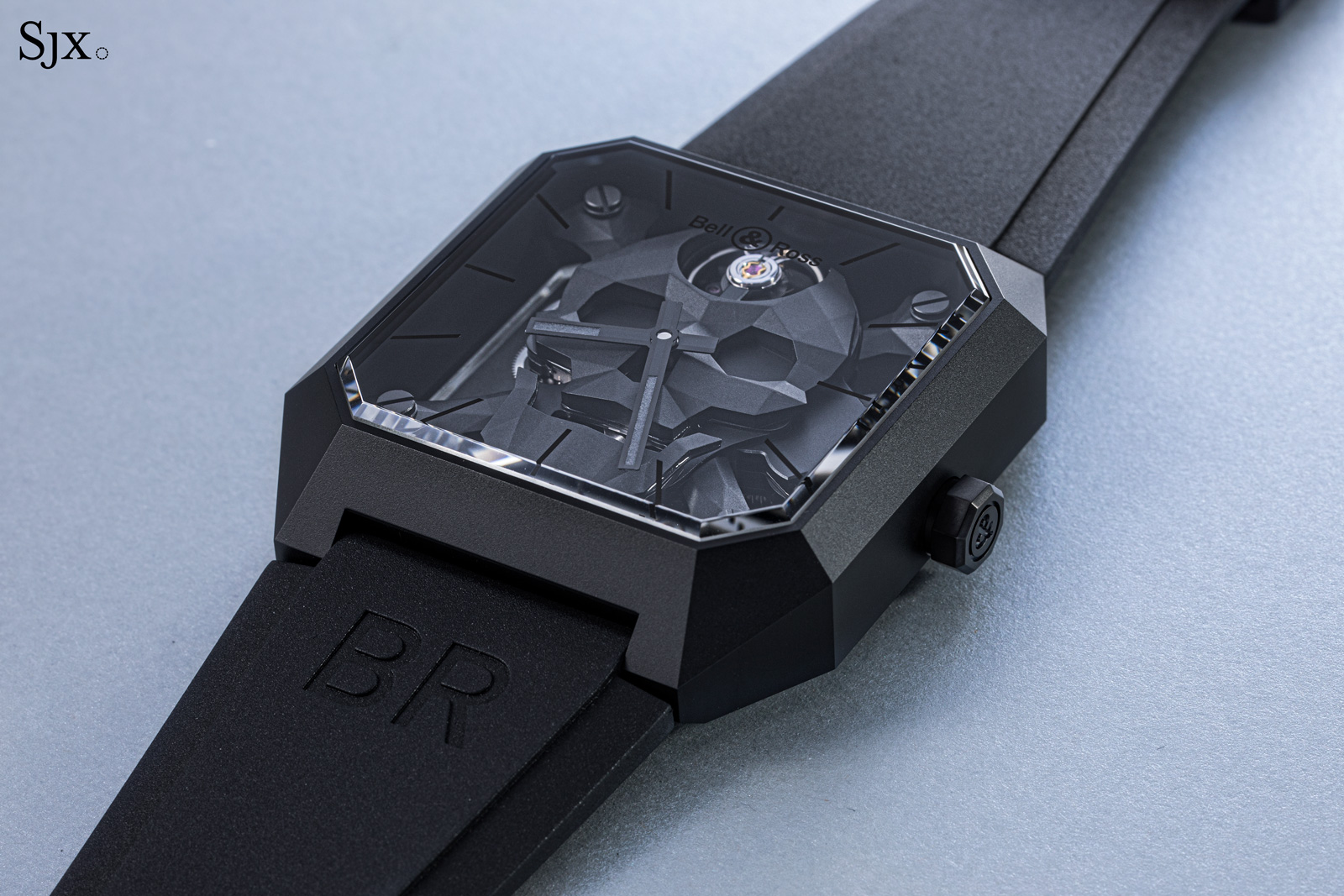 The case is entirely sand blasted, but the resulting flat, black appearance suits the motif well 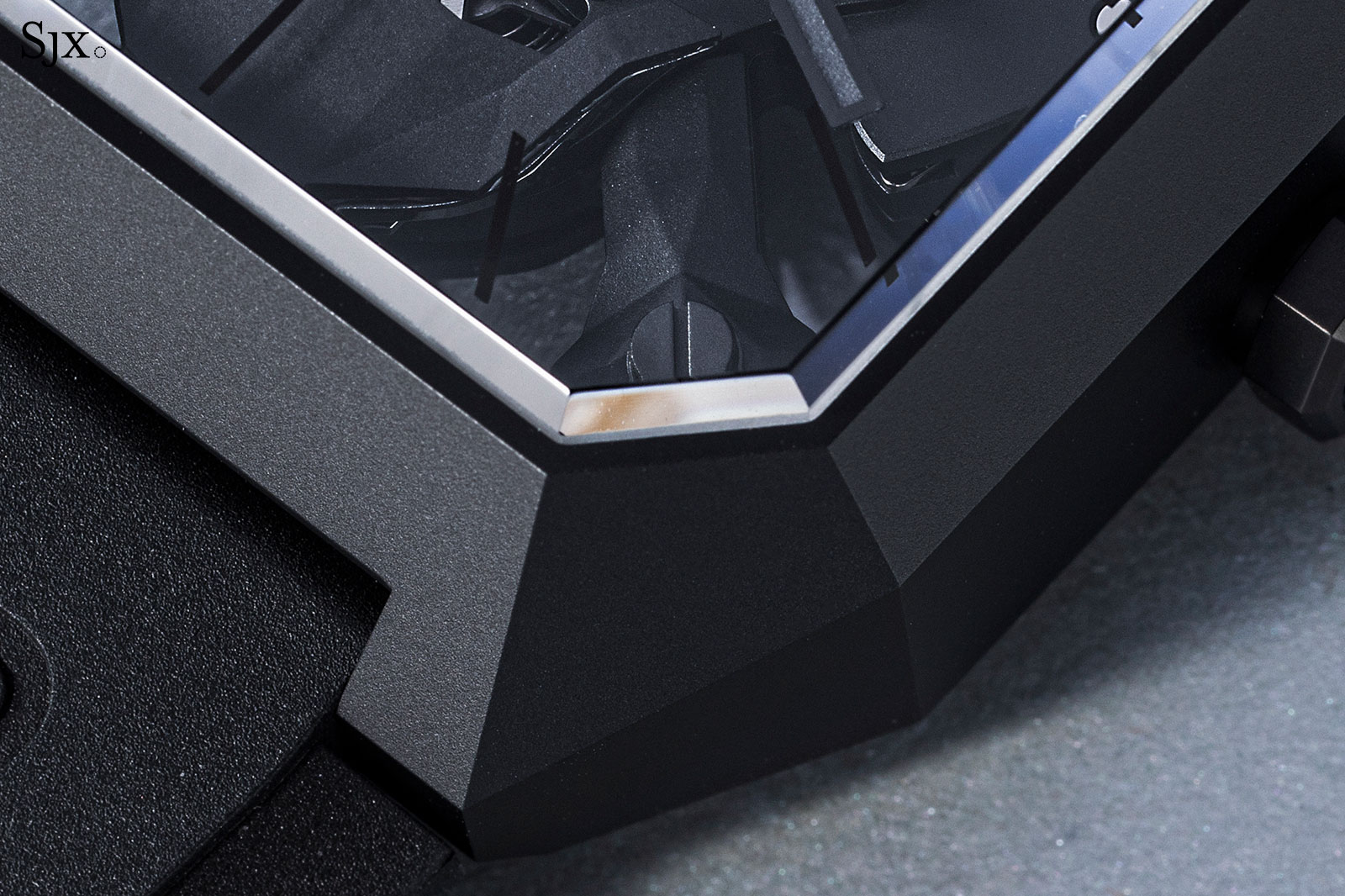 The flat step in between the case and bezel 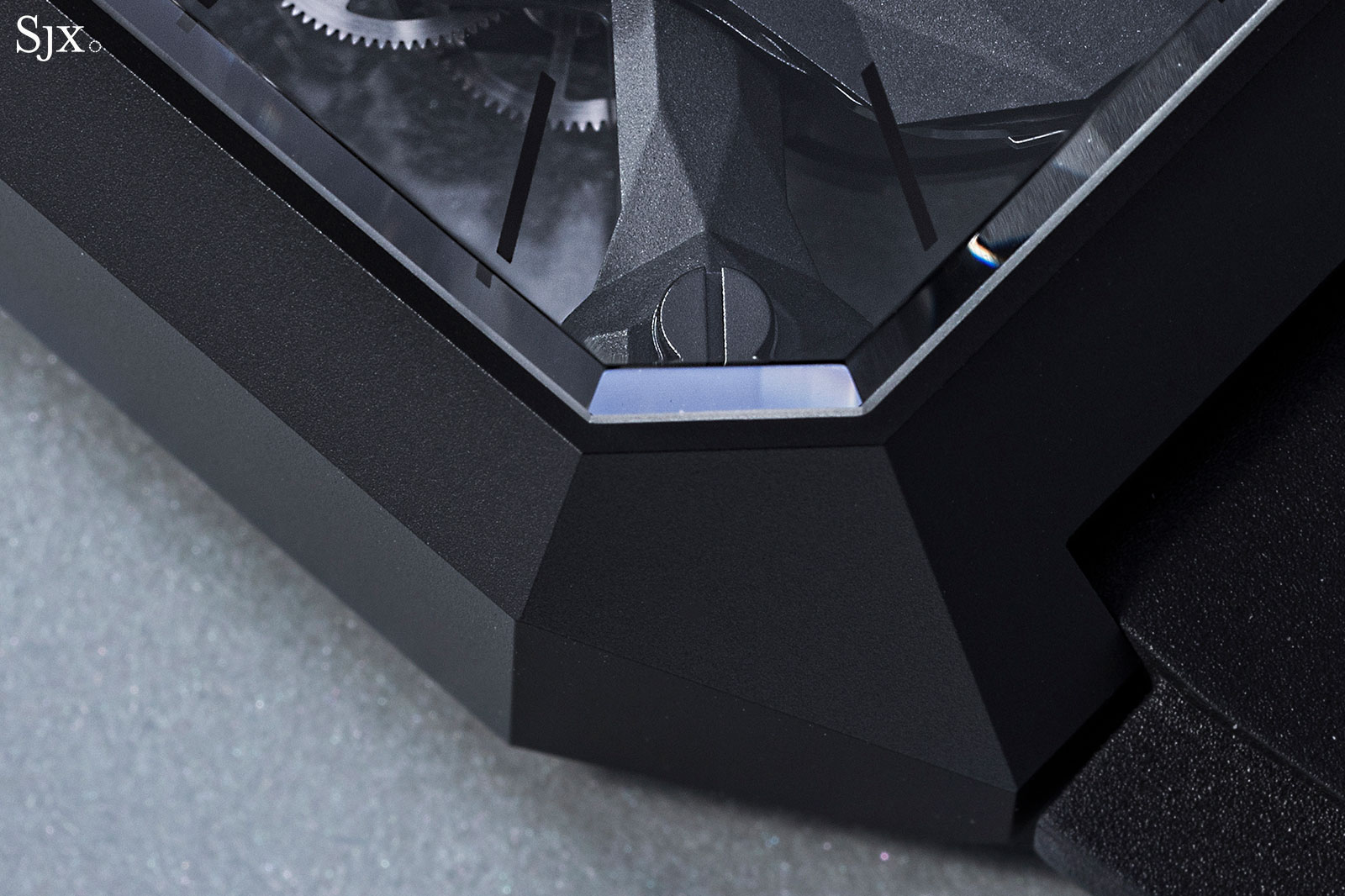 The quality of the case is no surprise. As with most B&R cases, this is made by Chatelain, the watch component manufacturer that’s long been owned by Chanel, which is also the majority owner of B&R. Chatelain is one of the best in the business – making cases and buckles for brands like Richard Mille and MB&F. 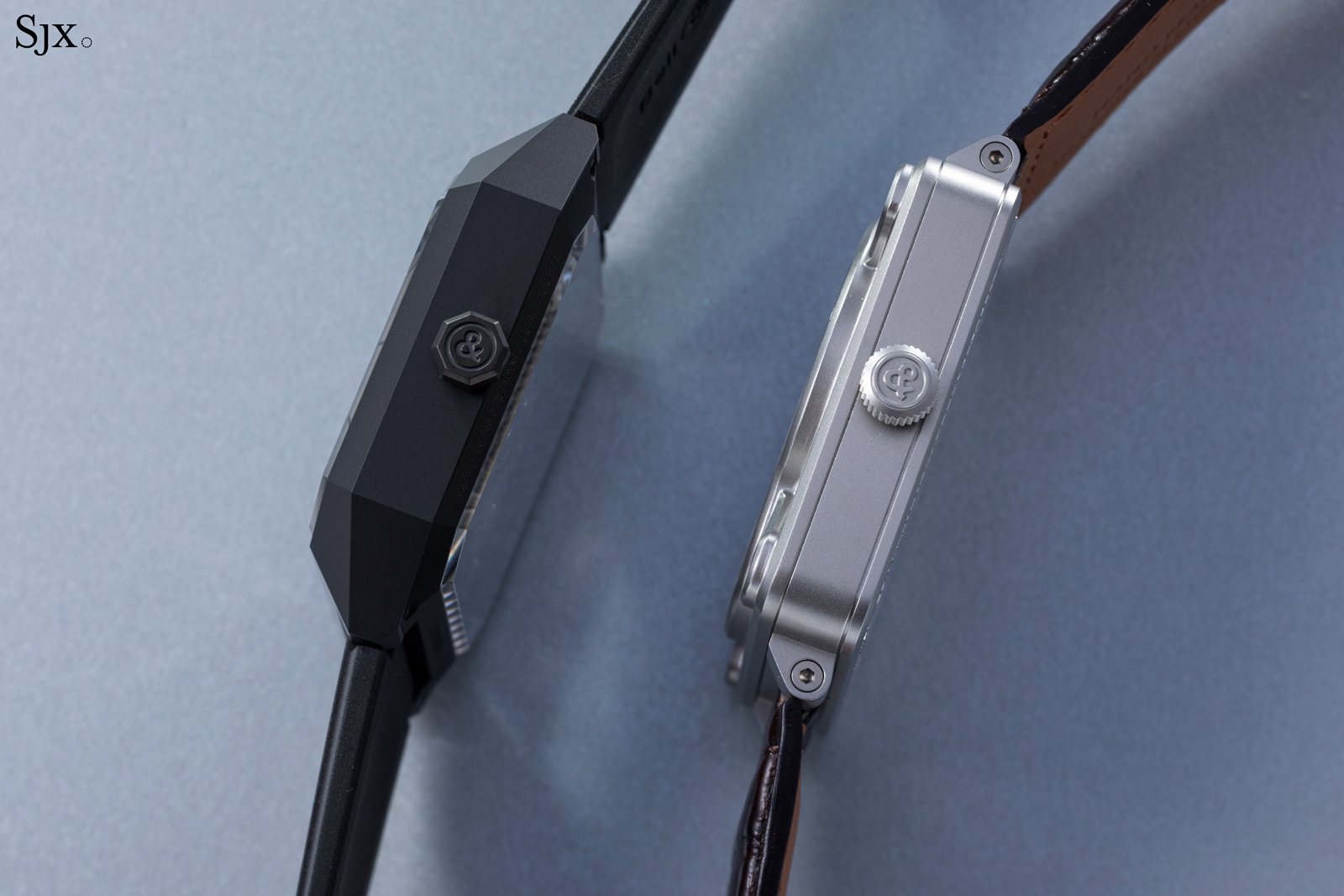 The Cyber Skull (left), and the Laughing Skull with its traditional square case in steel

Compared to most memento mori watches that utilise a static skull for decorative effect, the Cyber Skull has an edge in terms of its movement. Unlike most B&R watches that are powered by largely stock, third-party movement, the Cyber Skull is equipped with a movement developed from scratch. The BR-CAL.206 within was constructed to incorporate the skull, in terms of aesthetics as well as mechanics. Developed by Concepto, a complications specialist whose recent work includes the Breitling Datora triple-calendar chronograph, the BR-CAL.206 is unique for its shape – and a nifty extra in the form of a simple automaton. The BR-CAL.206 is an extreme example of a form movement (which are typically rectangular or tonneau-shaped).

The BR-CAL.206 is largely a straightforward, manual-wind movement, with most of its moving parts visible. But its moving parts have been arranged to fit the bridges and base plate shaped like a skull. And the base plate is secured within the case via four struts, forming the skull-and-crossbones. 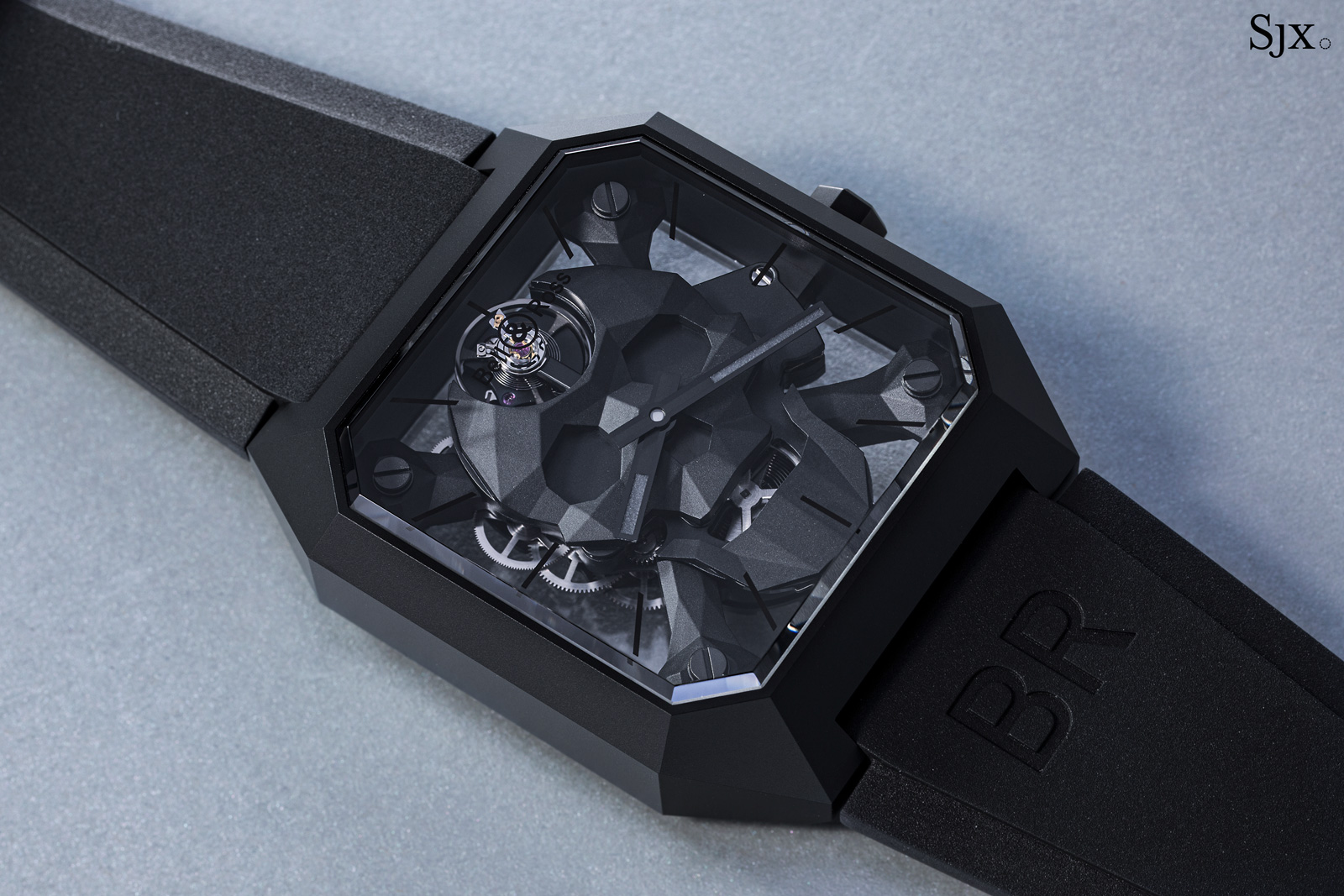 The base plate has been partially skeletonised to reveal the entire gear train, which will no doubt appeal to geeks. Arranged along a gentle curve on the side of the skull, the gear train starts with the barrel behind the jaws, and ends with the balance assembly at the forehead.

The jaws are an automaton that operates with a simple but clever mechanism. The lower jaw is coupled to the barrel ratchet wheel that rotates as the mainspring is being wound, causing the jaw to move up and down. 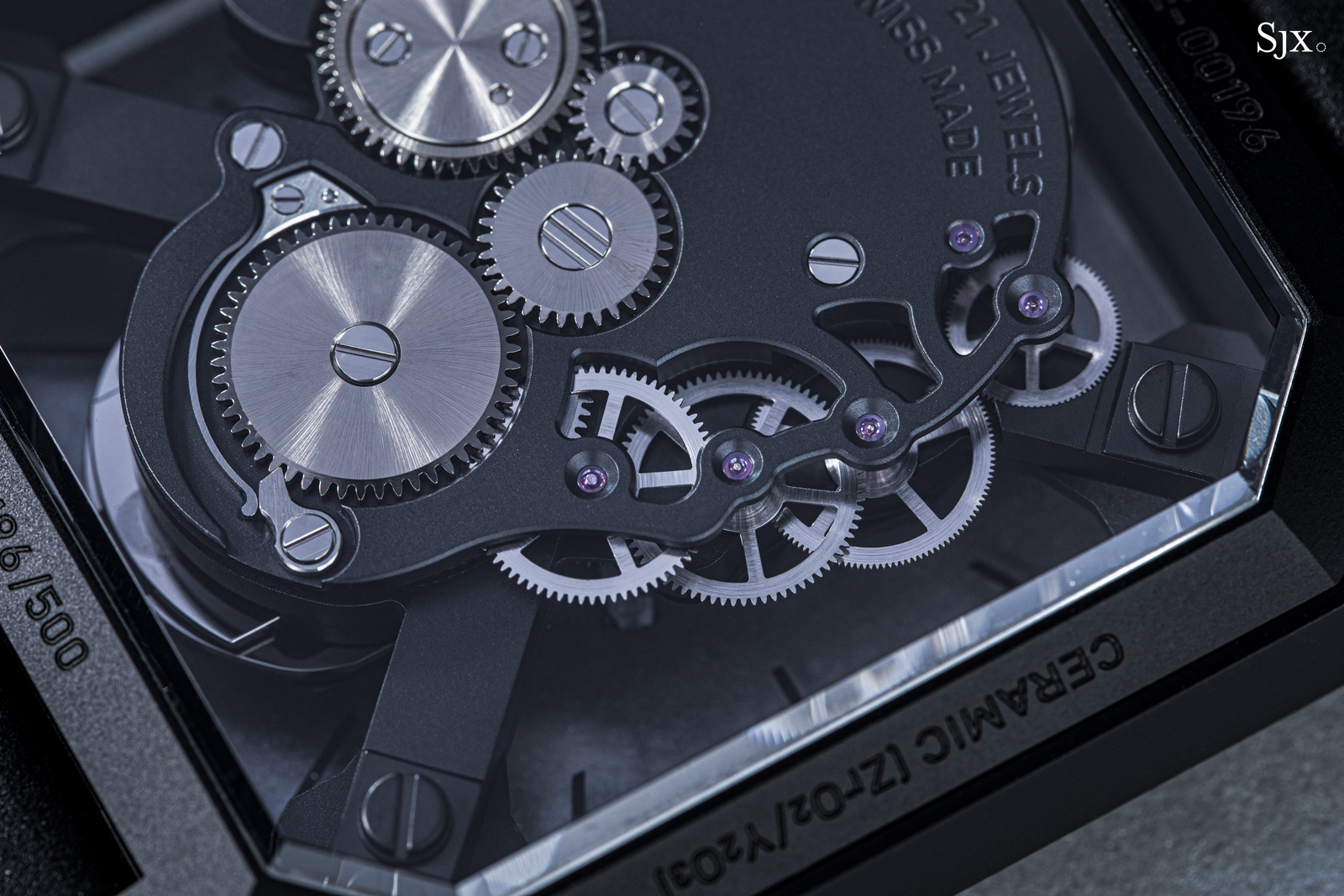 The wheels of the going train

The finishing is uniform through most of the movement – a sandblasted, matte black – but neat in style and appropriate for the theme and price. The bridges are also bevelled on their edges, albeit accomplished via stamping. Similarly, the screws and jewels sit in countersinks that are stamped. 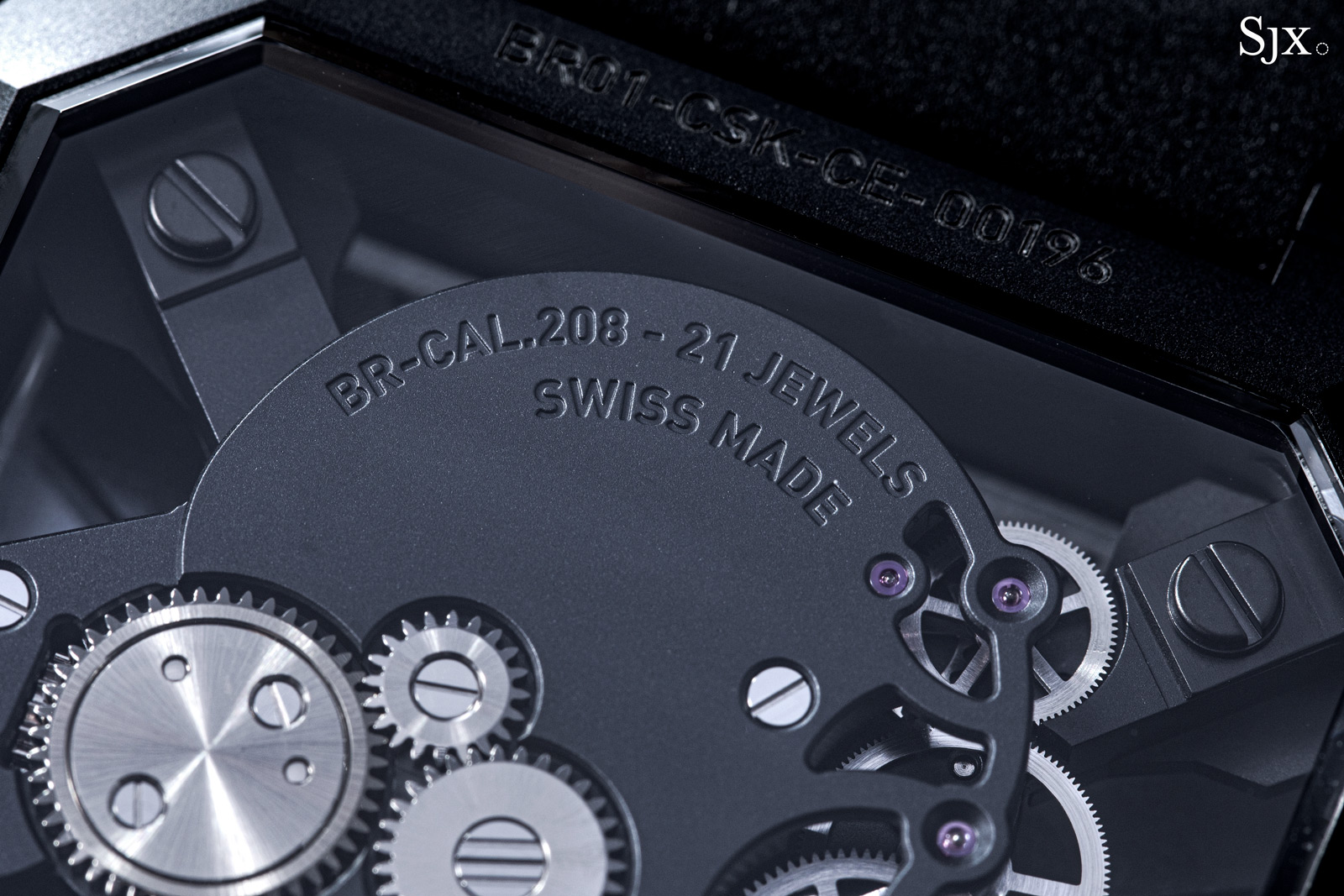 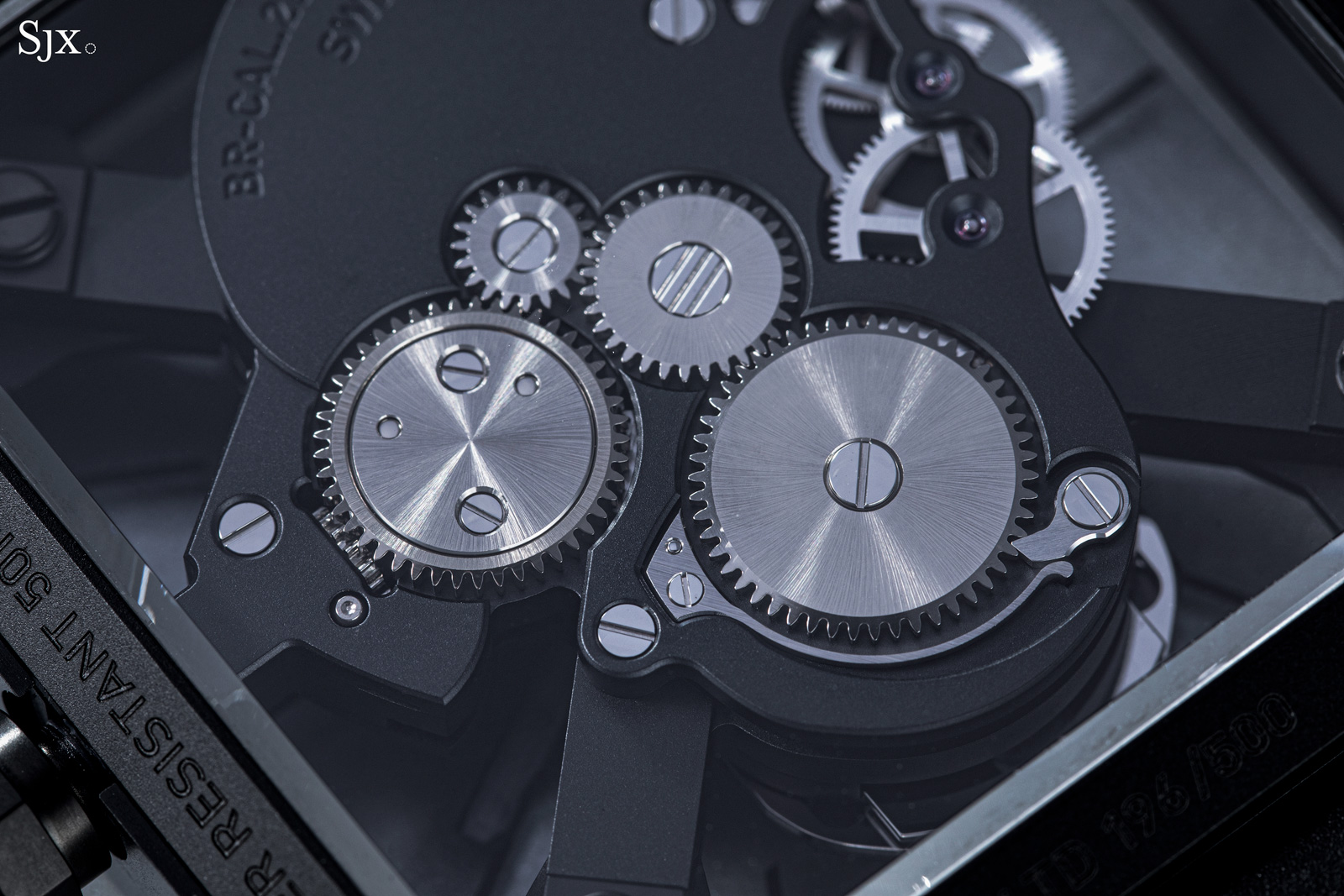 The winding wheels and barrel ratchet

But the steel and rhodium-plated wheels are done slightly better, while also providing visual contrast due to their colour.

The winding click, for example, has a brushed top and diamond-cut anglage with a mirrored finish. And the countersinks on the winding wheels are similarly diamond-cut, allowing them to catch the light. Finally, the long winding click spring is an elegant touch that brings to mind classical movements. 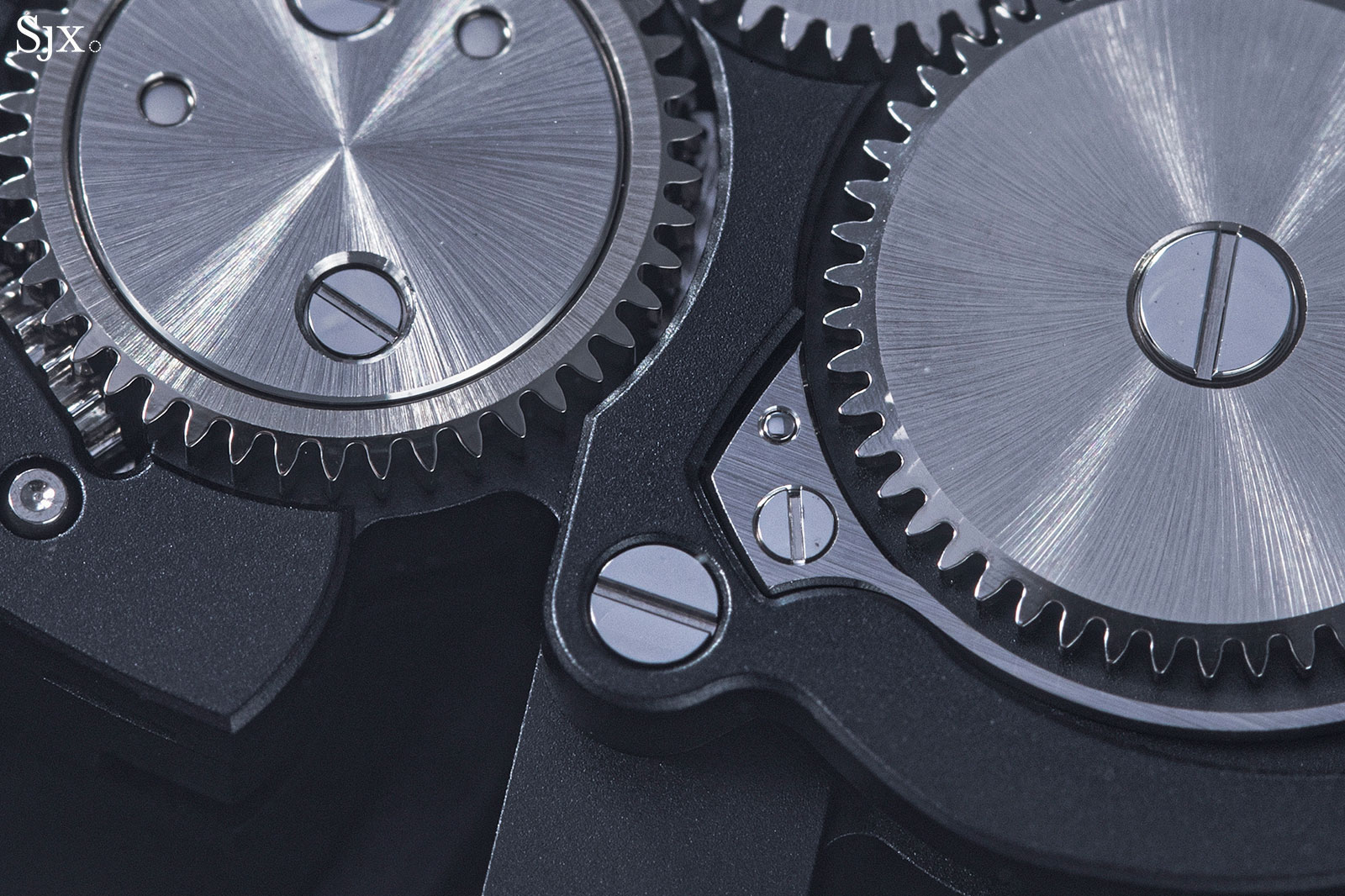 The decorative finishing on the steel wheels

The Cyber Skull is done well in most aspects. It adopts a familiar motif but manages to be original in design, while also being excellent in terms of the case quality. And it is priced honestly given the movement and materials.

Arguably the Cyber Skull’s only weakness is something that’s nothing to do with the intrinsic qualities of the watch: it’s further up the price ladder than the average B&R watch. But from a purely technical point of view, that’s not a tangible problem. 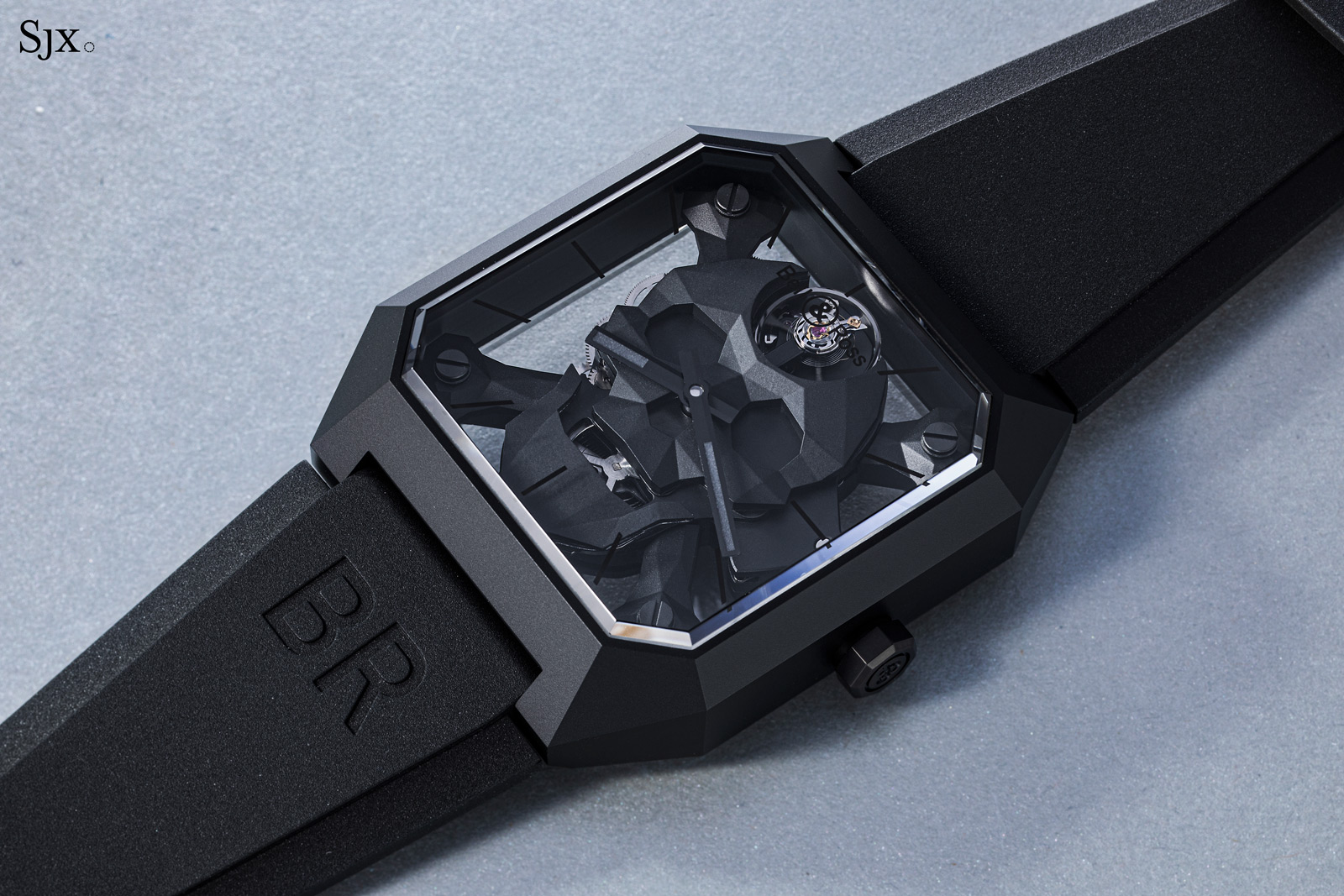