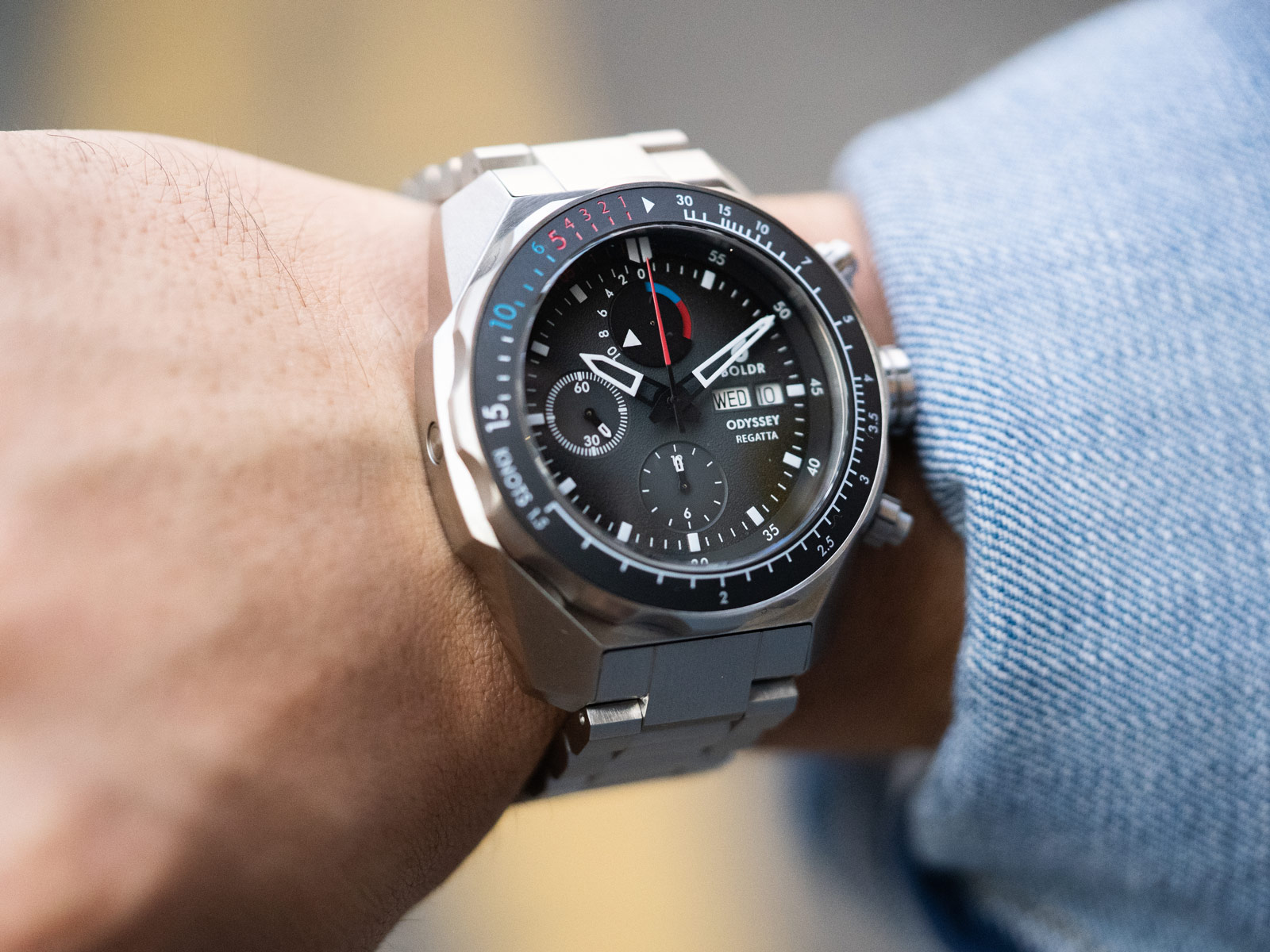 A “microbrand” based in Singapore, Boldr is all about affordable sports watches. The latest addition to its catalogue is the Odyssey Regatta, unusual for being a yachting-countdown watch at a notably accessible price.

Affordable, solid dive watches are commonplace nowadays, often offered by “microbrands” like Boldr. But the Odyssey Regatta sets itself apart from the competition due to its regatta countdown function (admittedly a simple execution powered by a 7750).

And it’s an attractive design, especially the faceted case. Though the case is stamped and looks the part, it’s still typified by strong, angular lines. There’s a boldness in the case design that reminds me of the Audemars Piguet Royal Oak Concept. 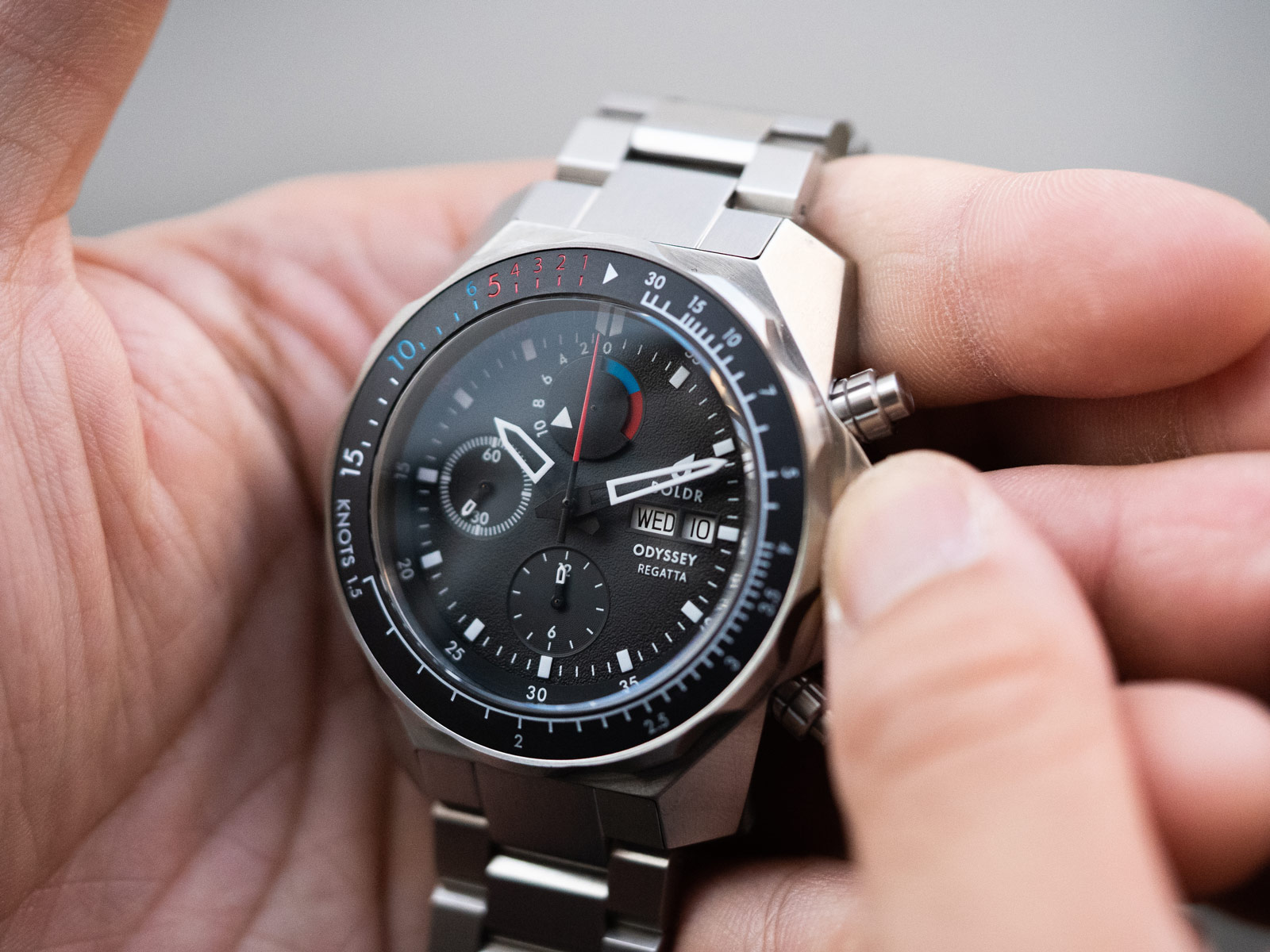 The Odyssey Regatta exemplifies Boldr’s focus on rugged “tool” watches. Having handled the prototype, I was impressed by the build quality, given its price. Feeling reassuringly solid on the wrist, the watch has a heft that’s reminiscent of dive watches like the Oris Aquis and the Sinn U1.

But the heft might be a bit too much for some. At 45 mm wide and 18.2 mm thick, the Odyssey Regatta is a beast on the wrist. It took me some time to get used to the watch’s towering case. Nevertheless, the weighty Odyssey Regatta represents a good option for someone searching for a large regatta chronograph that won’t break the bank.

Priced at US$1,499, it represents strong value. For comparison, the Frederique Constant Regatta Countdown Chronograph costs twice as much – and that’s from a brand known for making bang-for-buck watches. 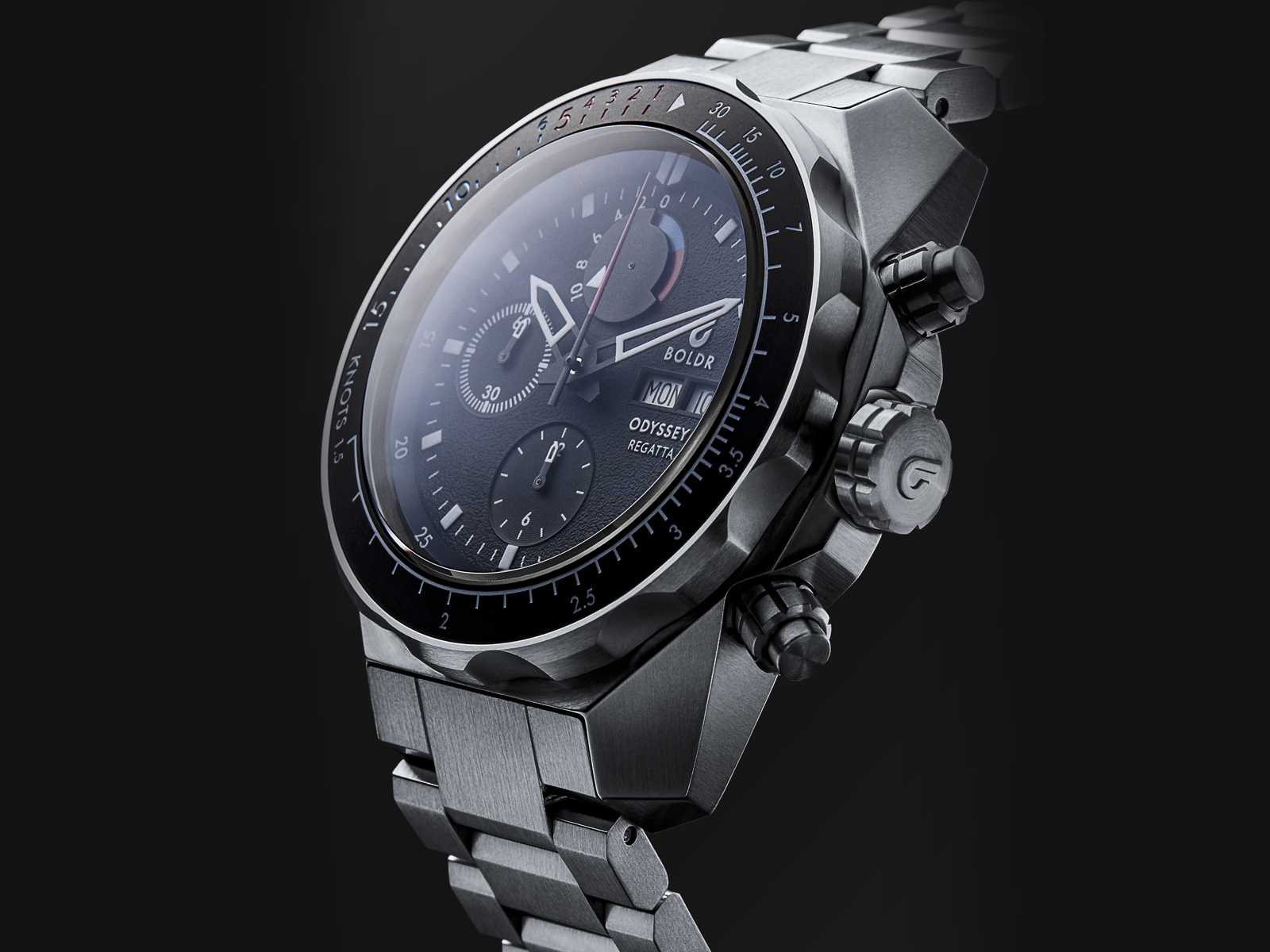 Regatta watches are characterised by a five- or ten-minutes countdown timer that tracks the time remaining before the start of a yachting race, during which the competing boats position themselves for the best spot at the starting line.

On the Odyssey Regatta, the timer takes the form of a disc at 12 o’clock in blue and red. The disc countdown sets itself apart from most regatta watches, that traditionally rely on a series of circular apertures. That said, the disc is also a cost-efficient manner of displaying the function, since it requires minimal modification to the base movement, unlike the traditional aperture-based countdown timer.

To go along with the countdown timer, the bezel combines a 15-minute countdown scale (with the first ten minutes in blue and red like the countdown disc) with a tachymeter graduated in nautical miles that can be used to measure the speed of a boat. 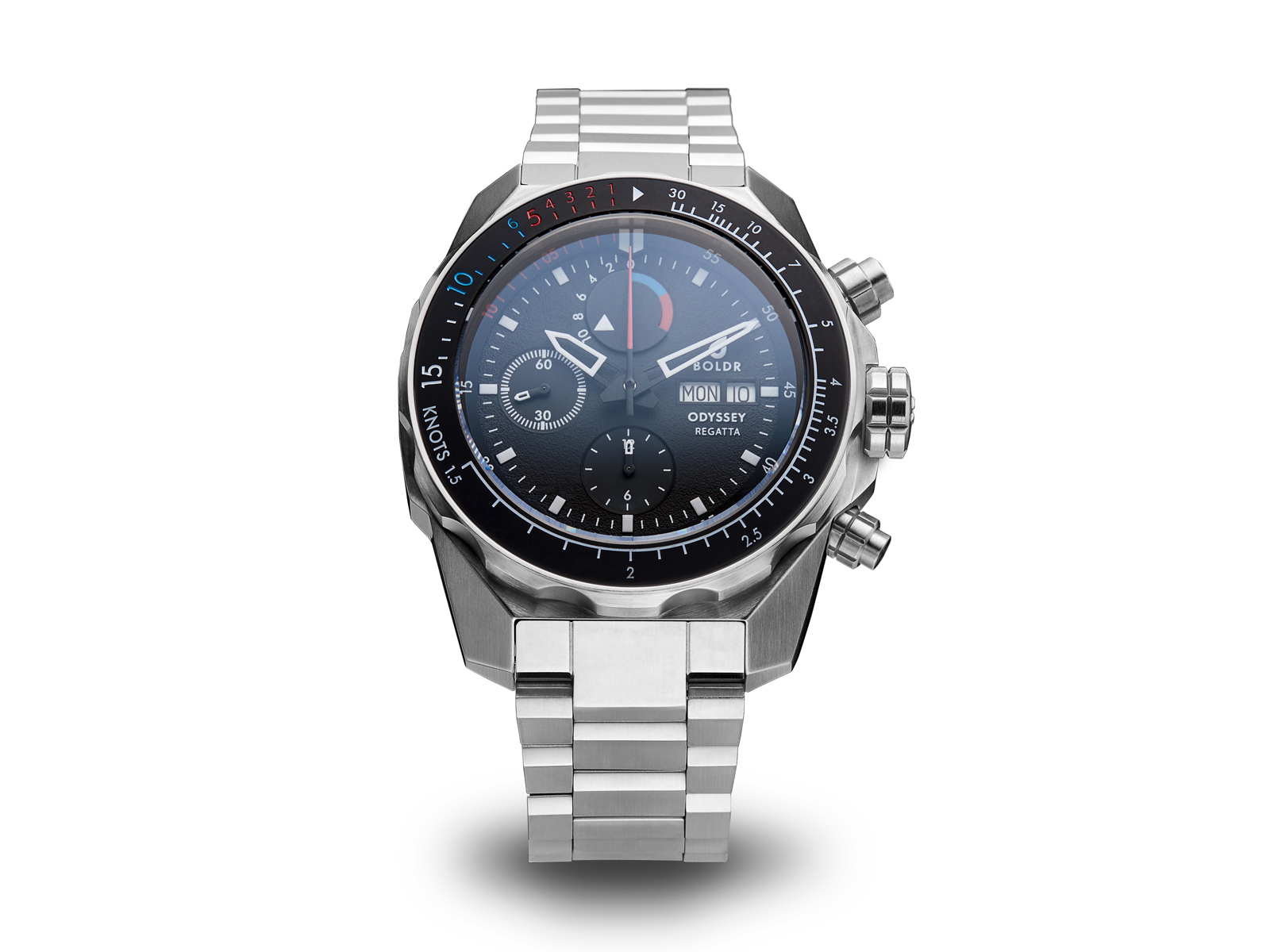 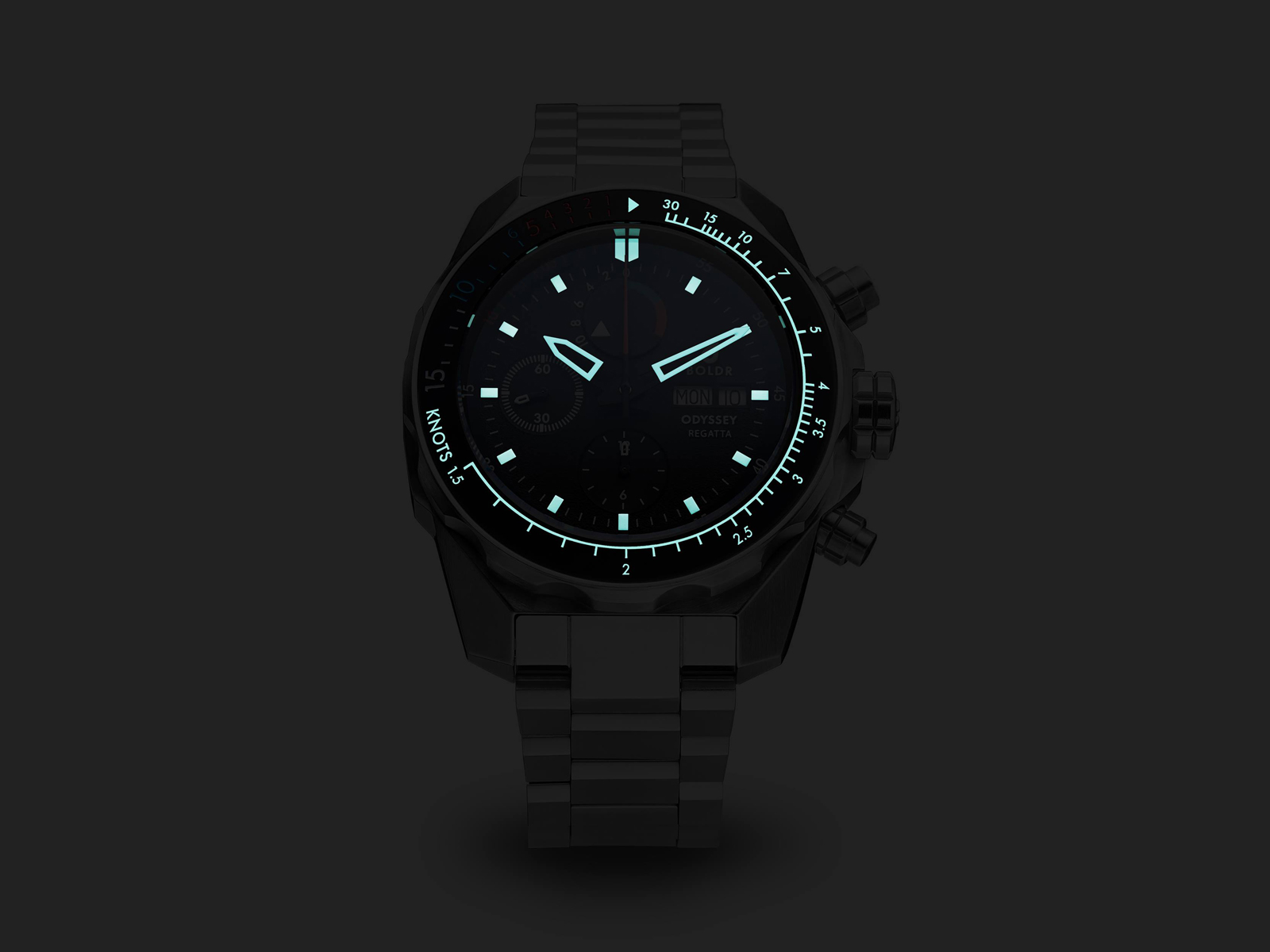 The watch features Super-Luminova on the hands, indices, and bezel

Fabricated via stamping, the massive case has slightly rounded edges that are characteristic of the production process. While not as refined as cases produced via more sophisticated techniques, the Odyssey Regatta case is good enough at its eminently accessible price.

It features a triple-lock, screw-down crown and a helium escape valve that provides 500 m of water-resistance. Beating under the closed case back is an ETA Valjoux 7750 in Elaboré grade. The 7750 is tried-and-tested, and features 44-hours of power reserve. 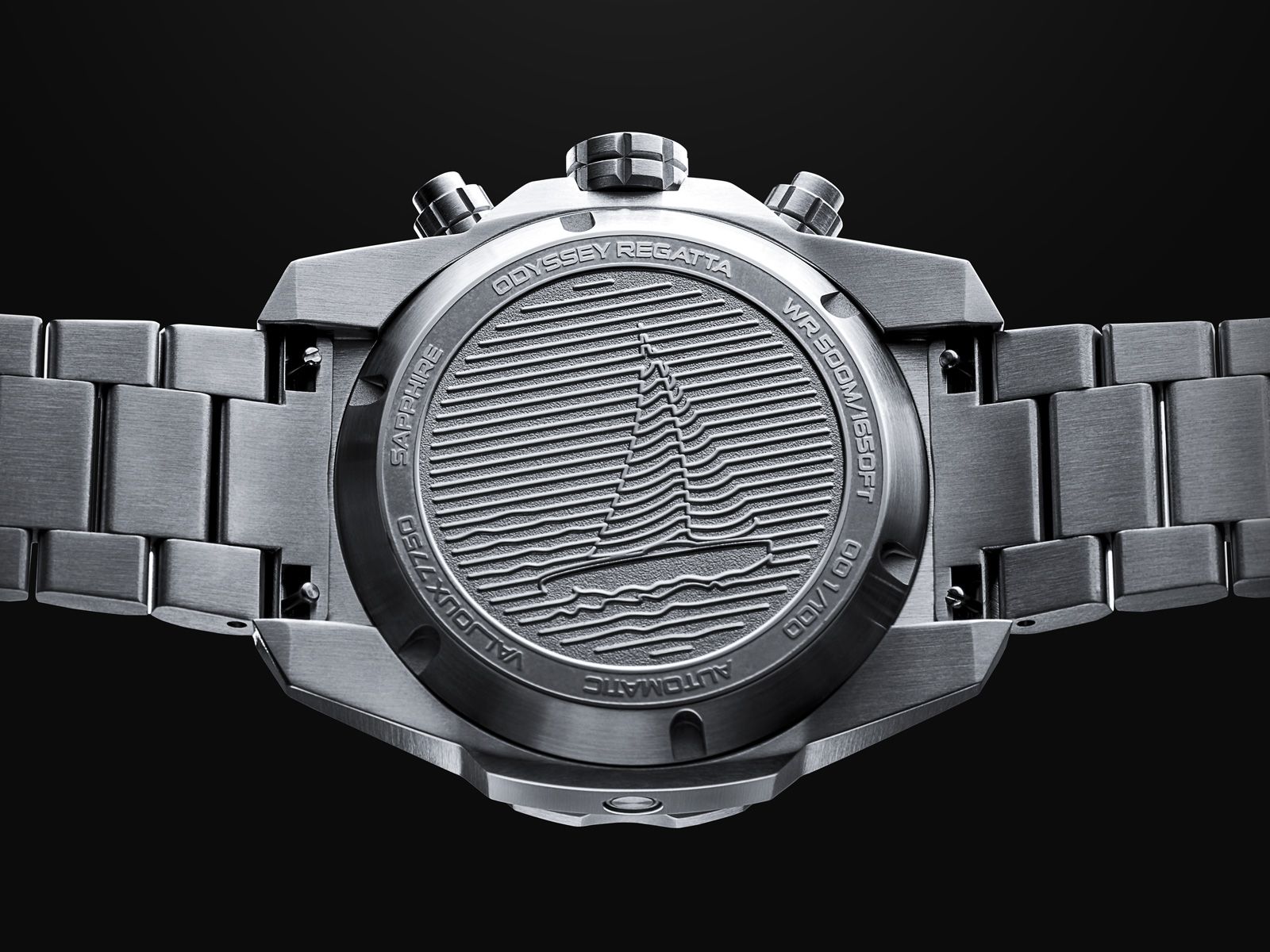 A twist on the beloved U1.