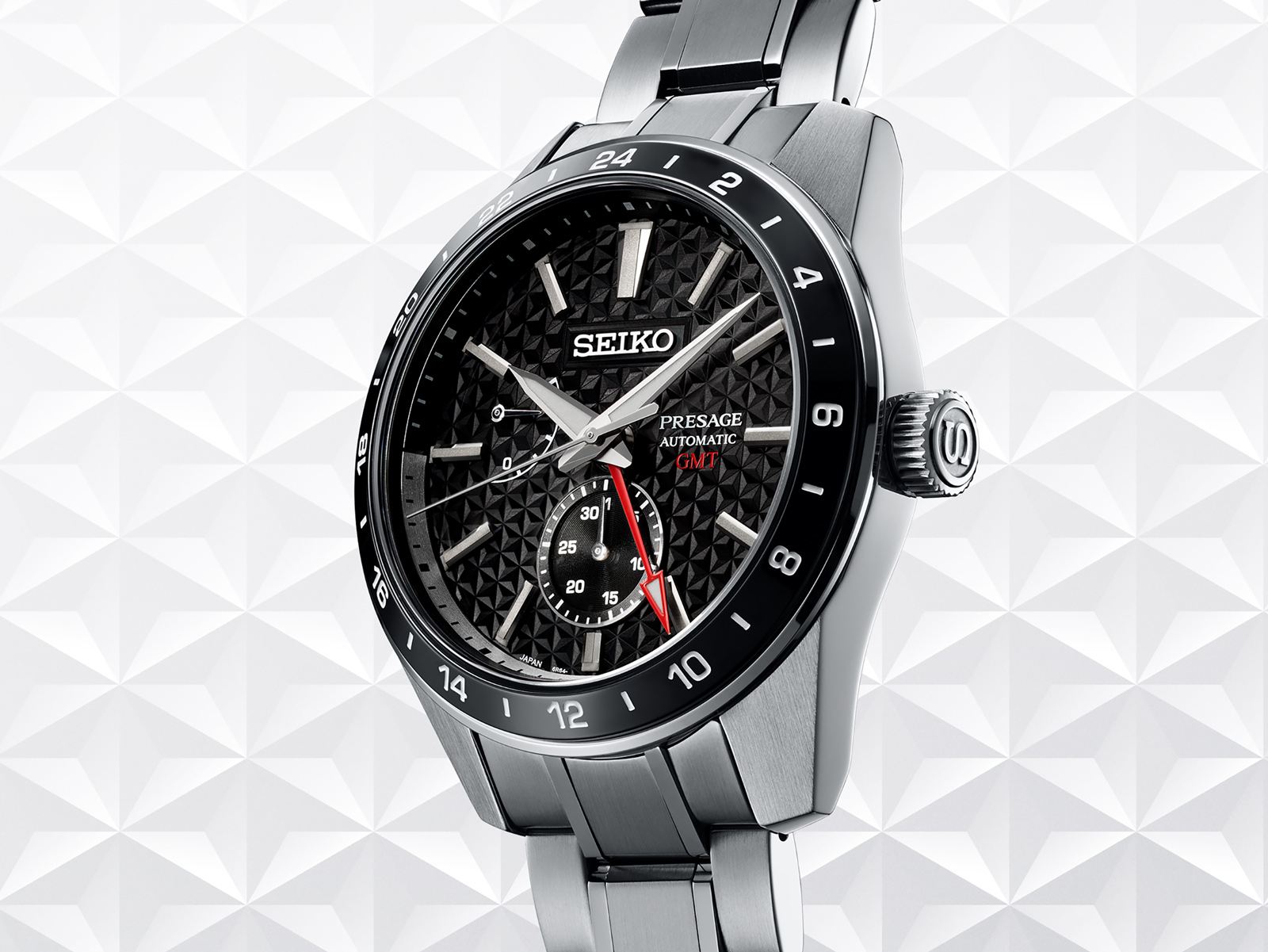 Named after the planar, angular case, the Sharp Edged series is one of the most striking lines in the affordable Presage collection. The latest addition to the range is the Presage Sharp Edged GMT, the first models that go beyond time-only.

It’s pretty clear that the Sharp Edges models were conceive to offer some of the Grand Seiko, but in a less elaborate watch at a more accessible price.

So it’s not surprising the new Sharp Edged GMT watches resemble the Grand Seiko Spring Drive GMT released last year. The dial layout is similar, as is the styling of the angular, faceted case. In many ways, the Sharp Edged GMT is the smaller brother of its Grand Seiko counterpart and one sharp-looking watch – no pun intended. 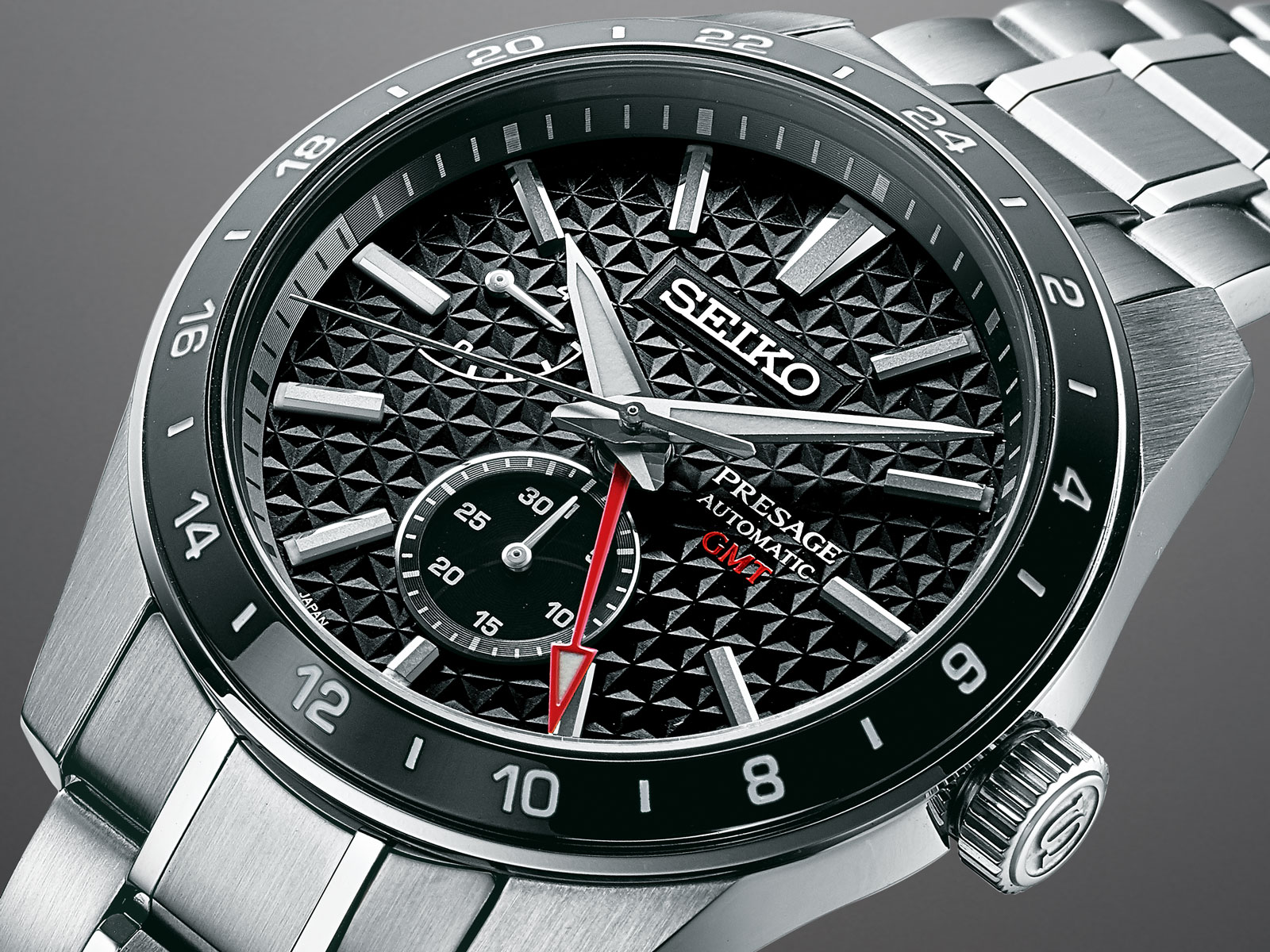 Importantly, the Sharp Edged GMT is identical to the Grand Seiko GMT in terms of function. It is a true GMT watch – the second time zone hand can be set independently whilst the seconds hand is running. Majority of GMT watches in its price range are conventional movement with an added 24-hour hand, which makes setting the two time zones more tedious.

Ultimately, the main attraction of the Sharp Edged GMT is its affordability. With a retail of US$1,380, the watch doesn’t have much competition – you will be hard-pressed to find another bona fide GMT watch with an in-house movement for the same price.

The Sharp Edged GMT is being launched with four variants, so there’s something for everyone. As is tradition with Seiko, each of the four are named after traditional Japanese materials or themes. Ideal for anyone who prefers brighter dial colours, the SPB217 has a navy dial. It’s named Aitetsu, literally “indigo iron”, while the green SPB219 is Tokiwa, which means “evergreen trees”. 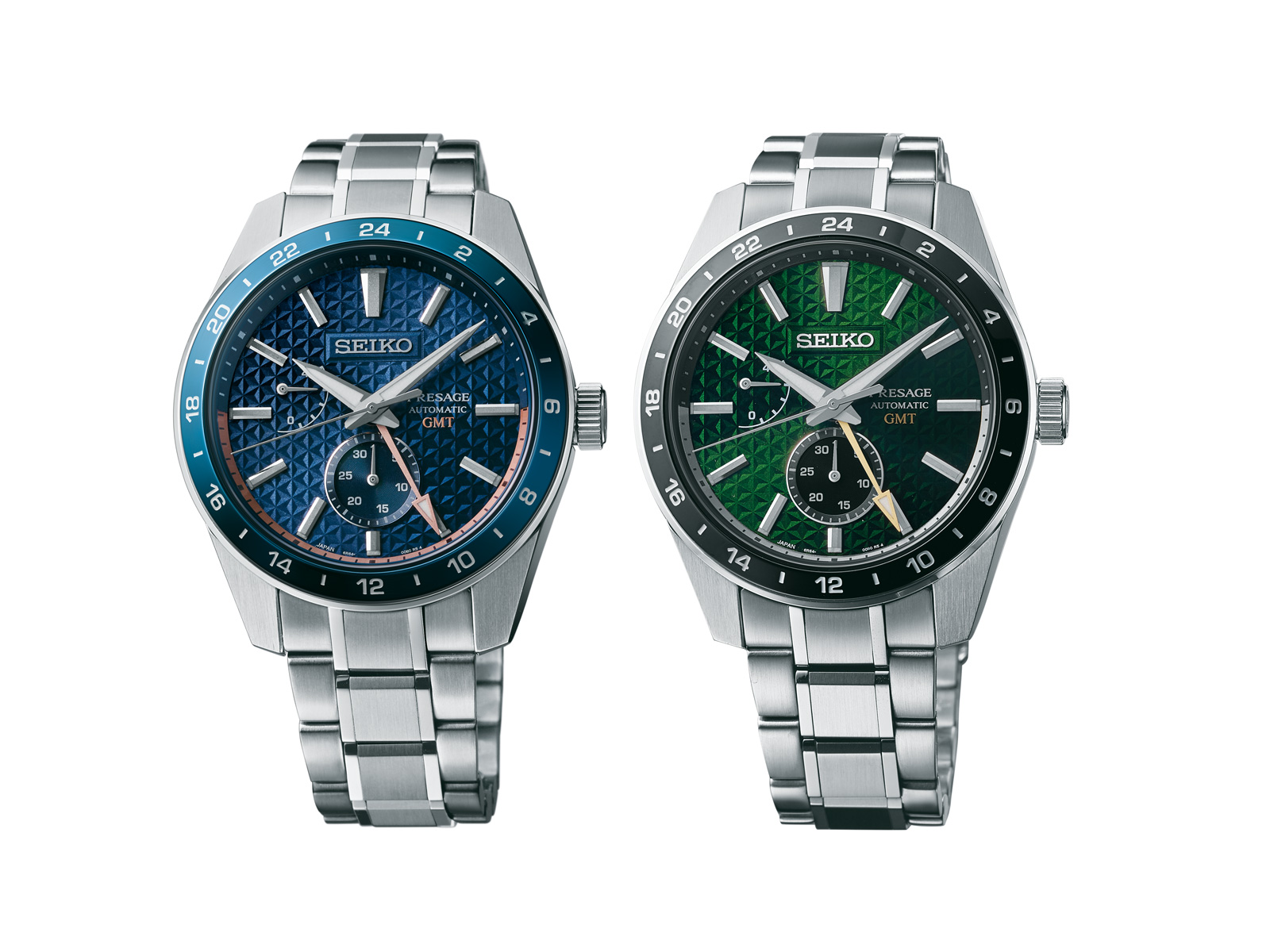 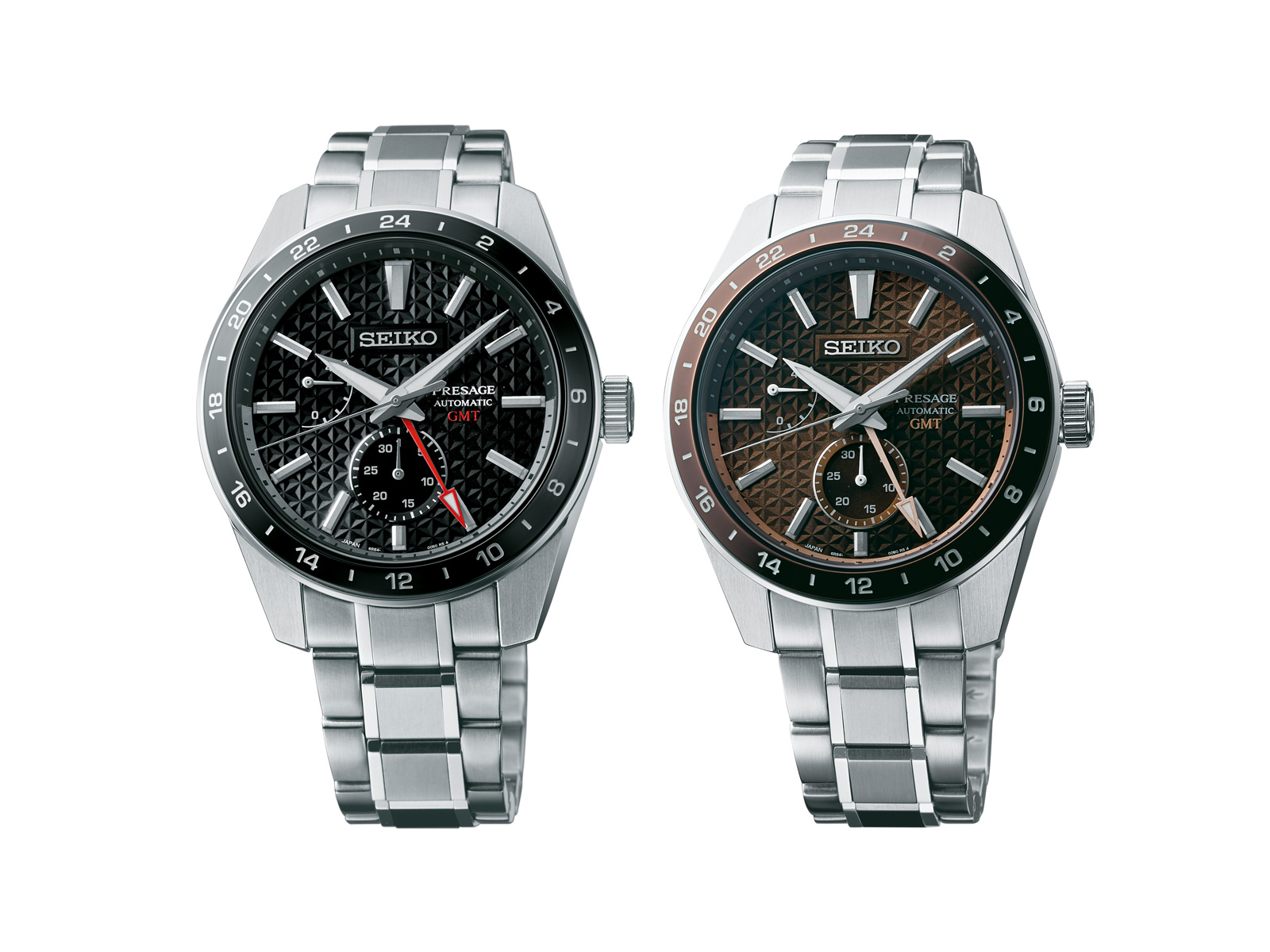 In contrast, the SPB221 and the SPB225 feature muted colours. The SPB221 is named Sumi-iro, which refers to the black ink used in Japanese painting and calligraphy. And finally the SPB225, known as Hihada-iro, is named after the reddish-brown of the dial that’s inspired by bark of Japanese cypress trees.

Of the four, the Hihada-iro is my pick, in part because it reminds me of the Grand Seiko Spring Drive GMT “Champagne Diamond” SBGE267G released late last year.

Colour aside, all four watches are otherwise identical. They boast a relatively high level of finishing for the price; not quite Grand Seiko level but reminiscent of what its pricier cousins do.

For one, the applied indices are faceted, brushed at the front but polished on the sides. The hands have an angular form that’s the result of milling with diamond-tipped tool, in keeping with the Sharp Edged moniker. And the lugs have crisp edges, while the bracelet features alternating vertical-brushed and polished finishing. 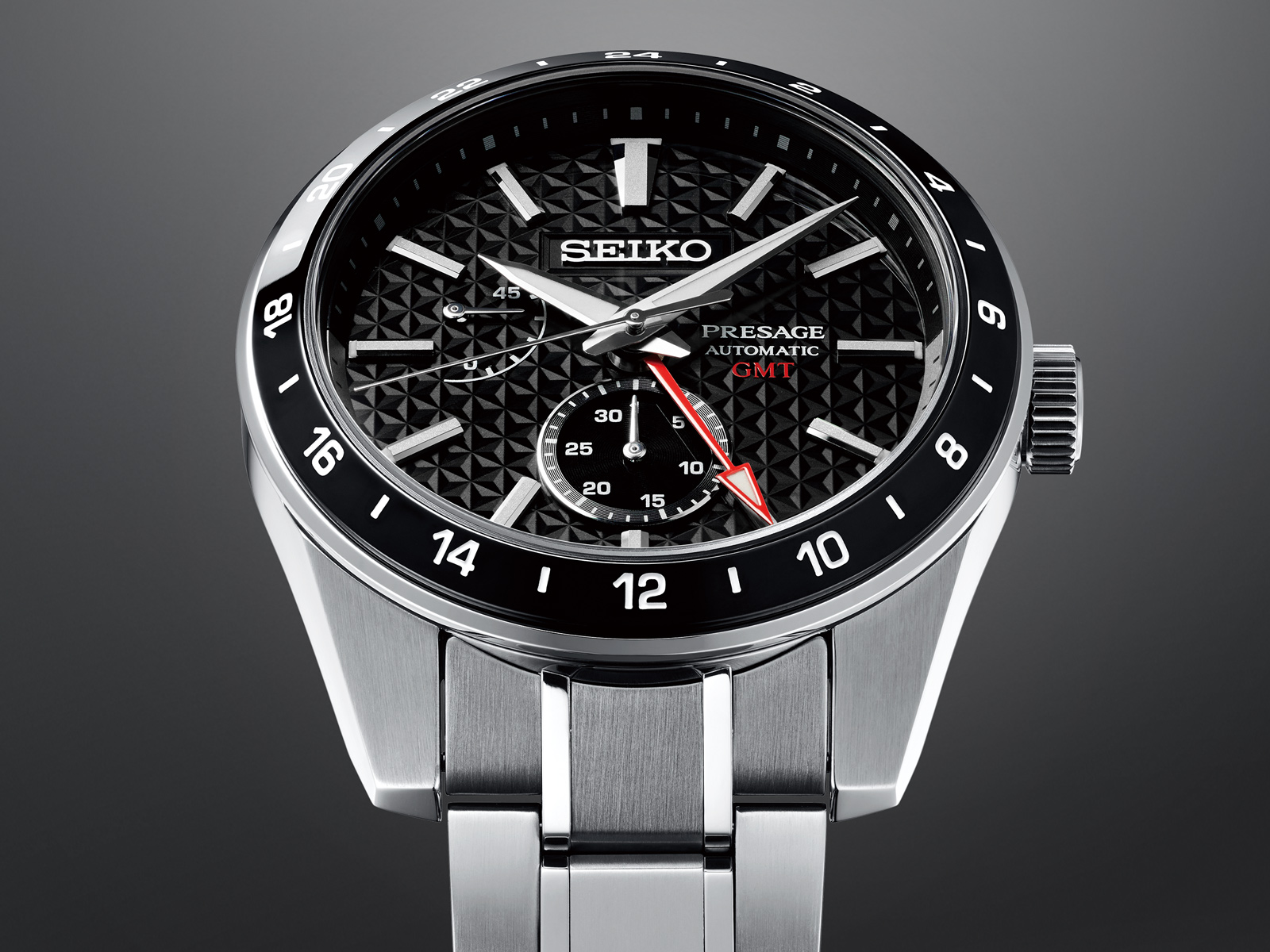 Notably, Seiko says that the steel case and bracelet of the new GMT is finished with a “super-hard” protective coating that makes them more resistant to scratches.

The Sharp Edged GMT is powered by the 6R64, a calibre launched several years ago but rarely used. The movement has a respectable 45-hour power reserve, along with power reserve and date functions.

Availability: From May at Seiko boutiques and retailers
Price: US$1380