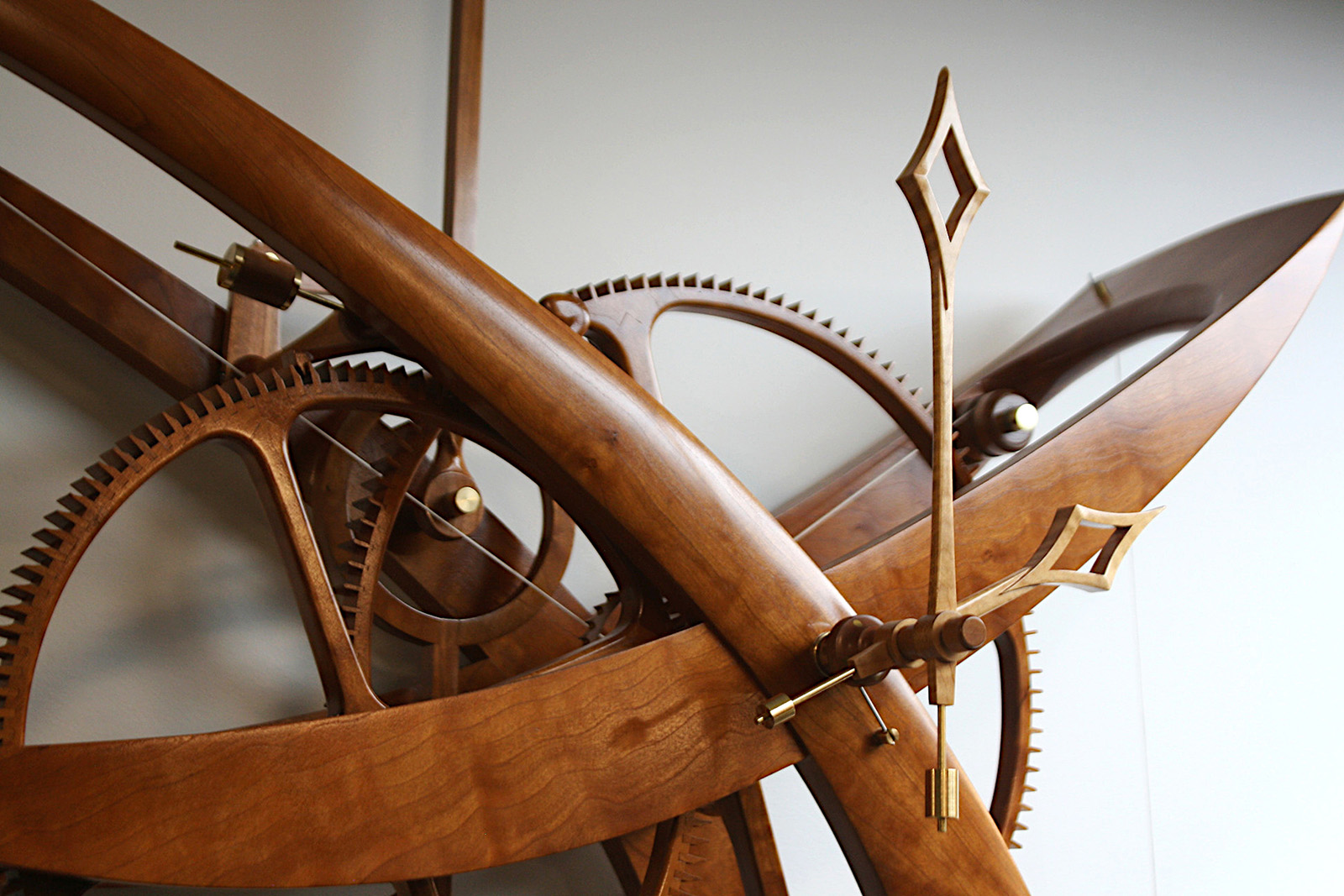 A self-taught clockmaker in Michigan, Rick Hale has unveiled his latest timekeeping sculpture – Wind & Water. Working under the name Clockwright, Mr Hale specialises in the creation of bespoke, monumental wooden clocks, such as the KL1 introduced in 2018, which stood over 5 ft, or 1.5 m, tall.

One could be forgiven for thinking that Wind & Water is a static work of art rather than a functional, mechanical clock regulated by a pendulum. It’s an illusion created by the disconnected layout of the components and the deceptively simple looking gear train. The Wind & Water is, in fact, both.

Naturally, the motion of the pendulum isn’t captured in still photos, and can only appreciated in person. The clock is doubtlessly a dynamic presence in real life: measuring 1.5 m by almost 1 m, it will be hard to miss on the wall. 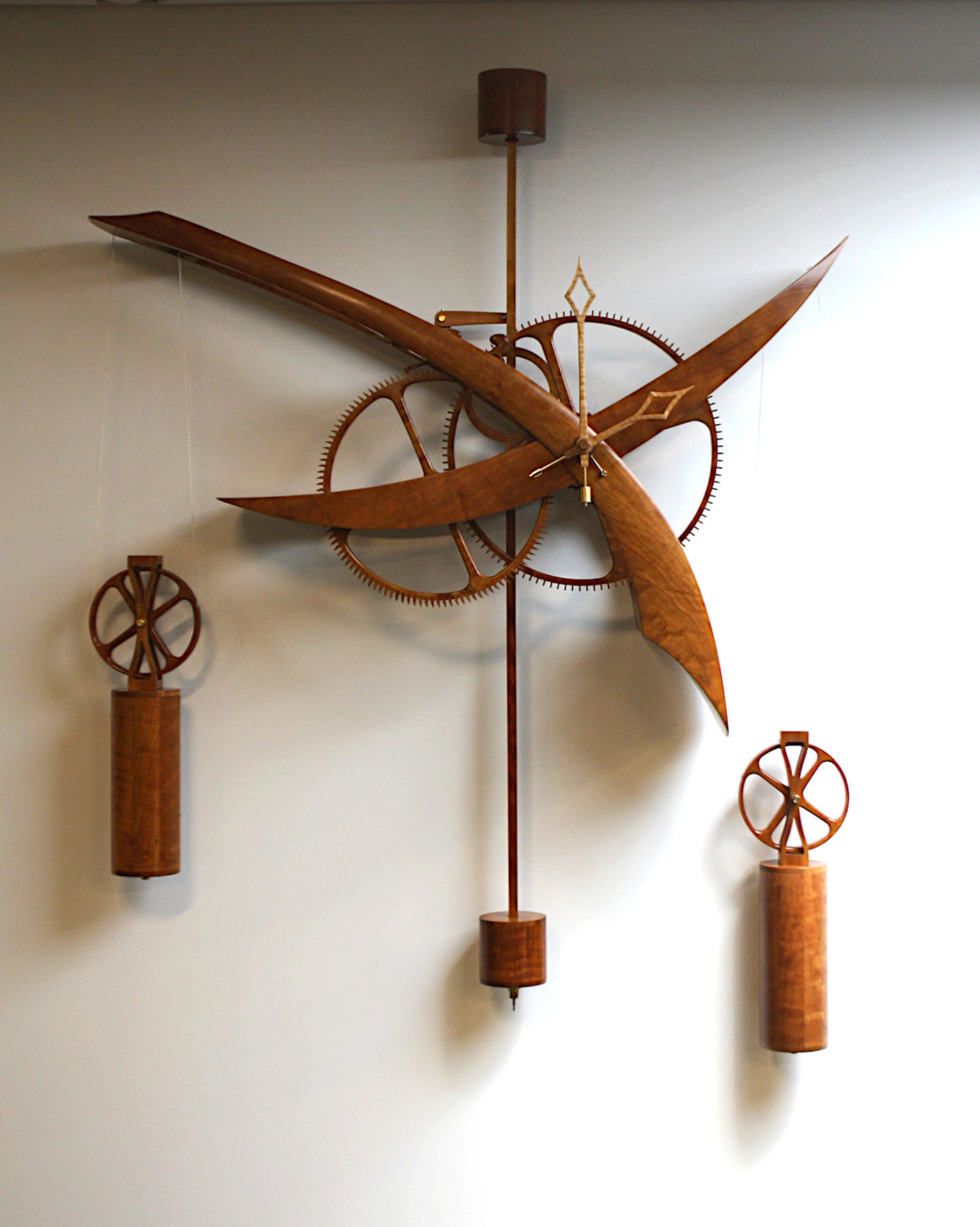 Made almost entirely out of figured cherry that has been aged for several years, the components exhibit varied grain and colour, giving it a nuance impossible with conventional metal parts. Meanwhile, lignum vitae, a dense wood that’s hard wearing and self-lubricating, is used for the bushings and rollers.

And unlike metal, wood is isotropic; its strength is directional – strong along its grain, but weaker laterally. As a result, the direction of the grain has to be kept in mind when creating both the mechanical and structural parts of the clock – while also considering the aesthetics of the grain and colour – which calls for an additional layer of skill on the part of Mr Hale, beyond just mechanical aptitude. 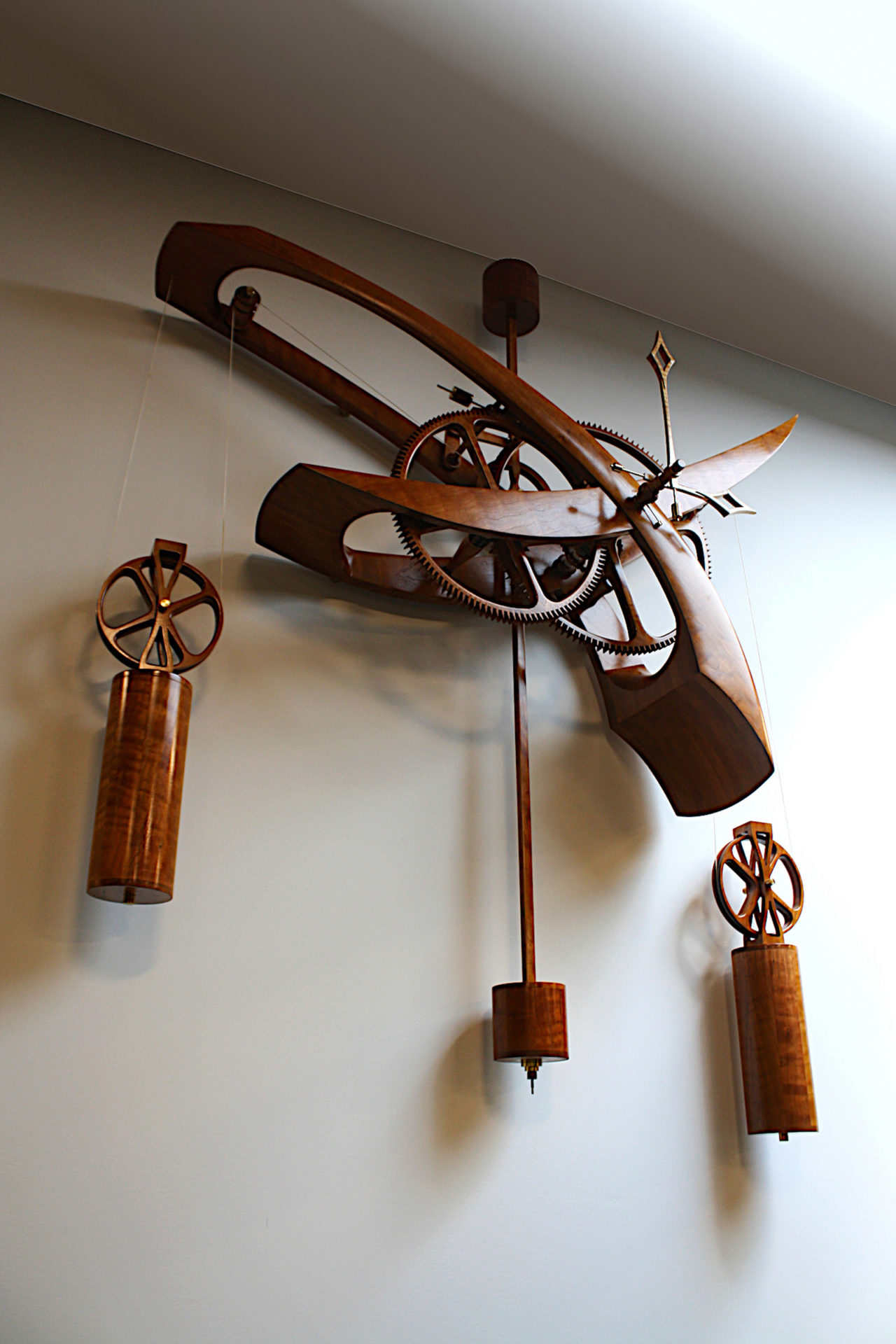 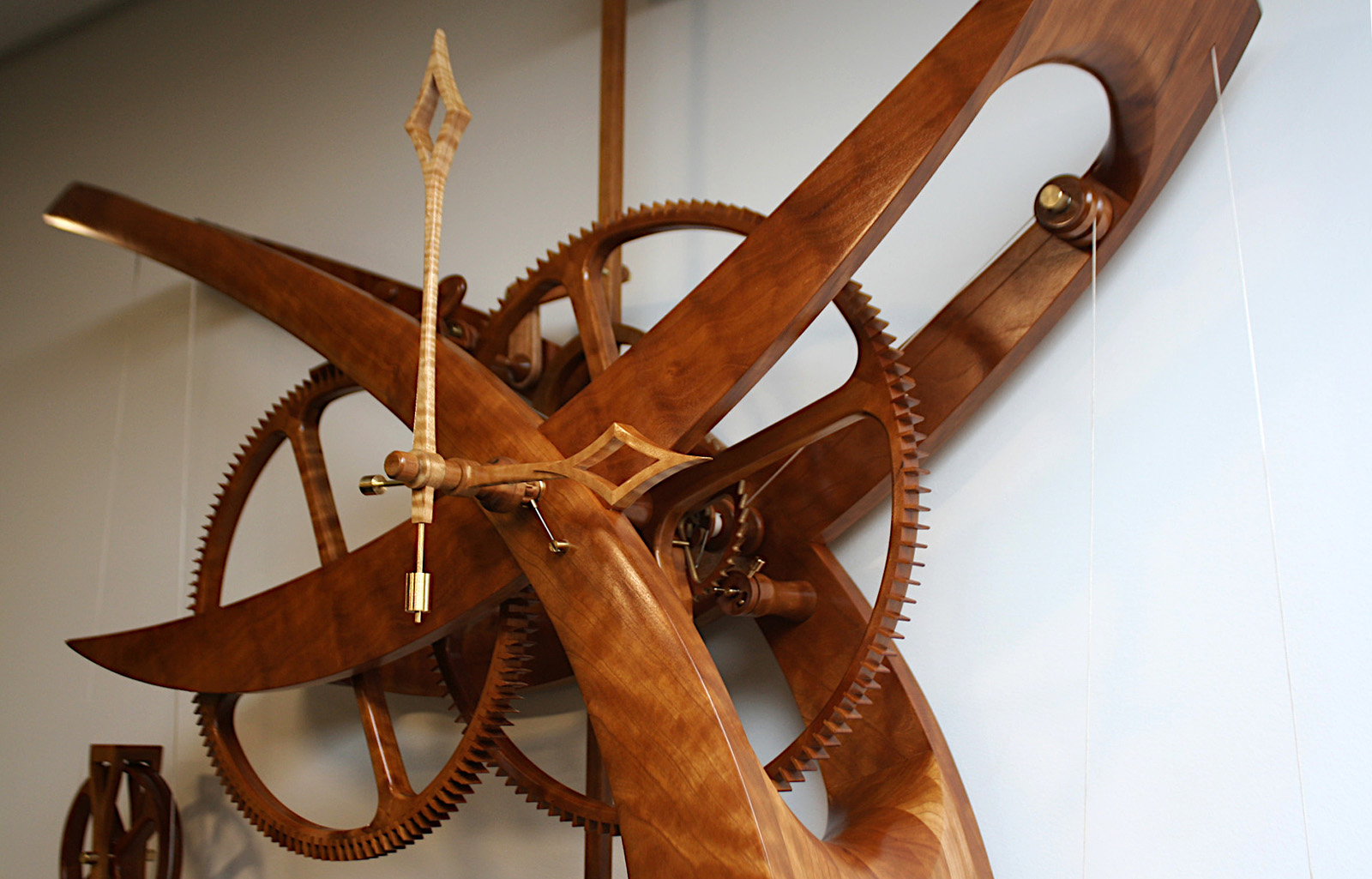 Of particular interest is the construction of the clock, which is as concise as possible given the size. The mechanics of the clock has been condensed, leaving only two main wheels – the centre wheel driving the minute hand, and the escape wheel. Their large diameters allow for the necessary gear reduction ratio which isn’t feasible in say, a comparable wristwatch construction. 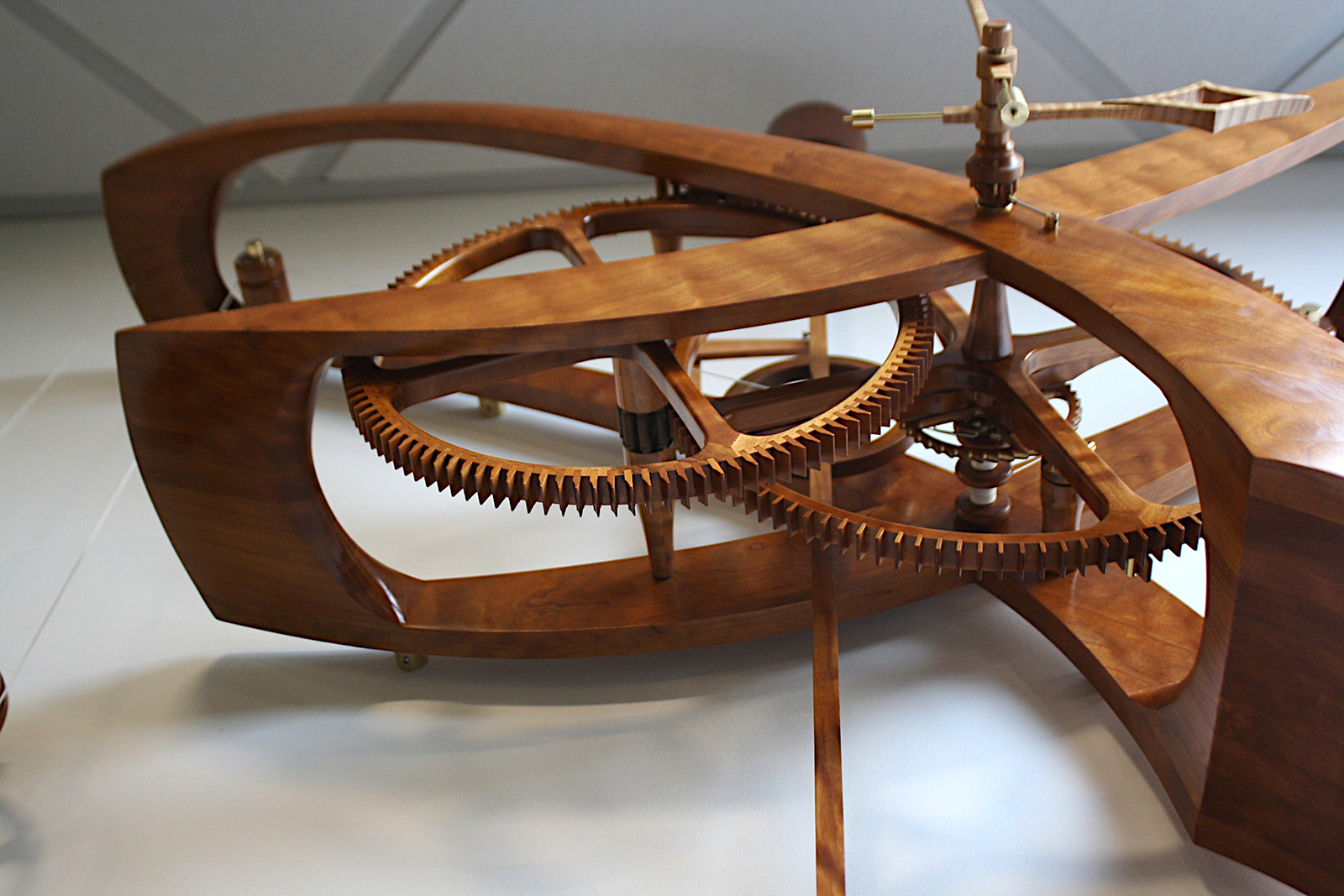 The escapement is based on a single-pivot grasshopper escapement, originally by invented by English clockmaker John Harrison in the 18th century. It is built with a cantilevered, single-sided construction – much like a flying tourbillon that is pivoted only at its base – in order to expose as much of the mechanism as possible. That said, most of the escapement unfortunately remains hidden behind the arched frame of the clock. 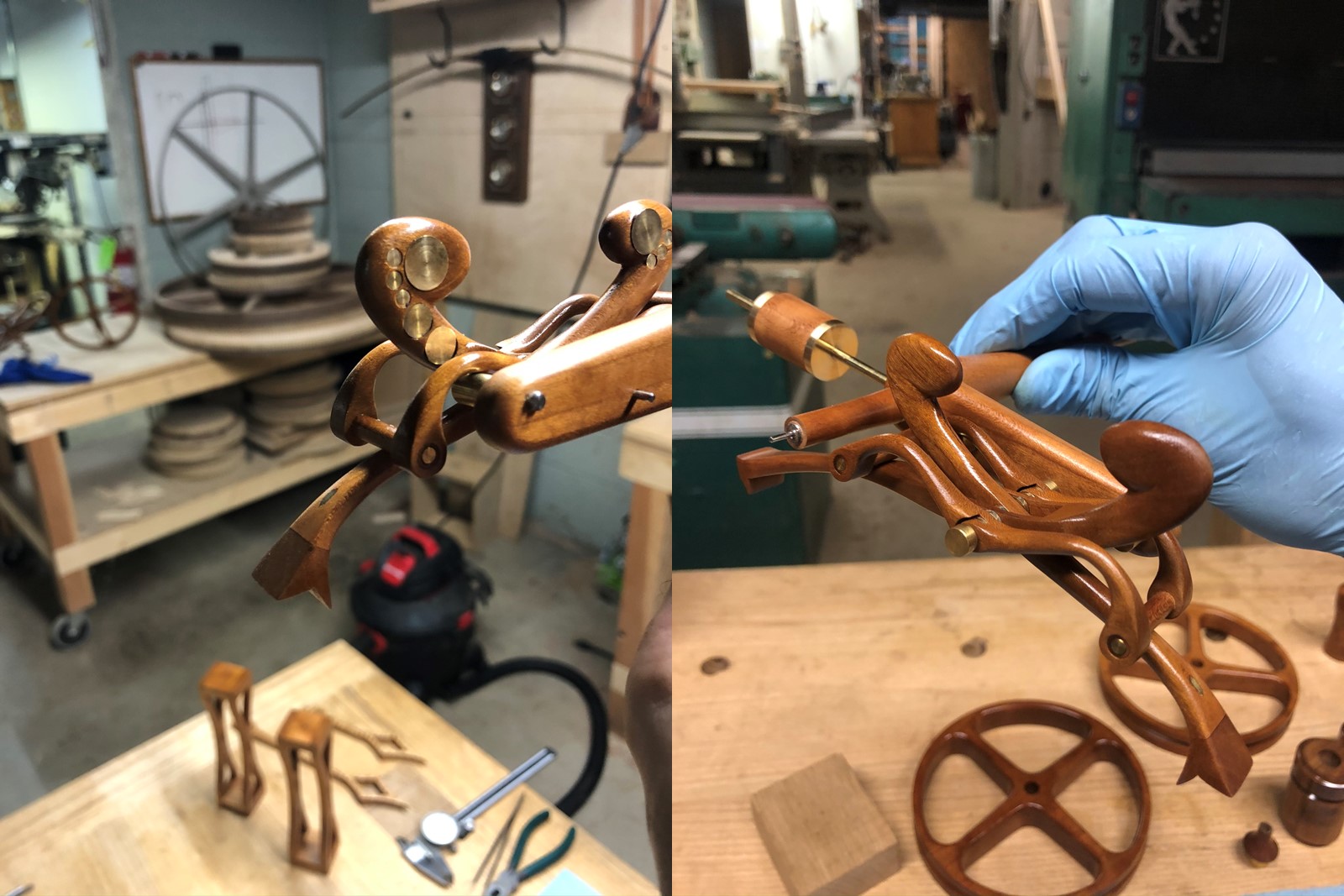 The grasshopper escapement inspired by Harrison; the pallet counterweights being installed (left)

As the entirety of the clock is of wood, careful construction choices were made – the pallets for instance, are made of two separate pieces of seamlessly-joined cherry wood in order to align the woodgrain direction for strength and impact resistance. 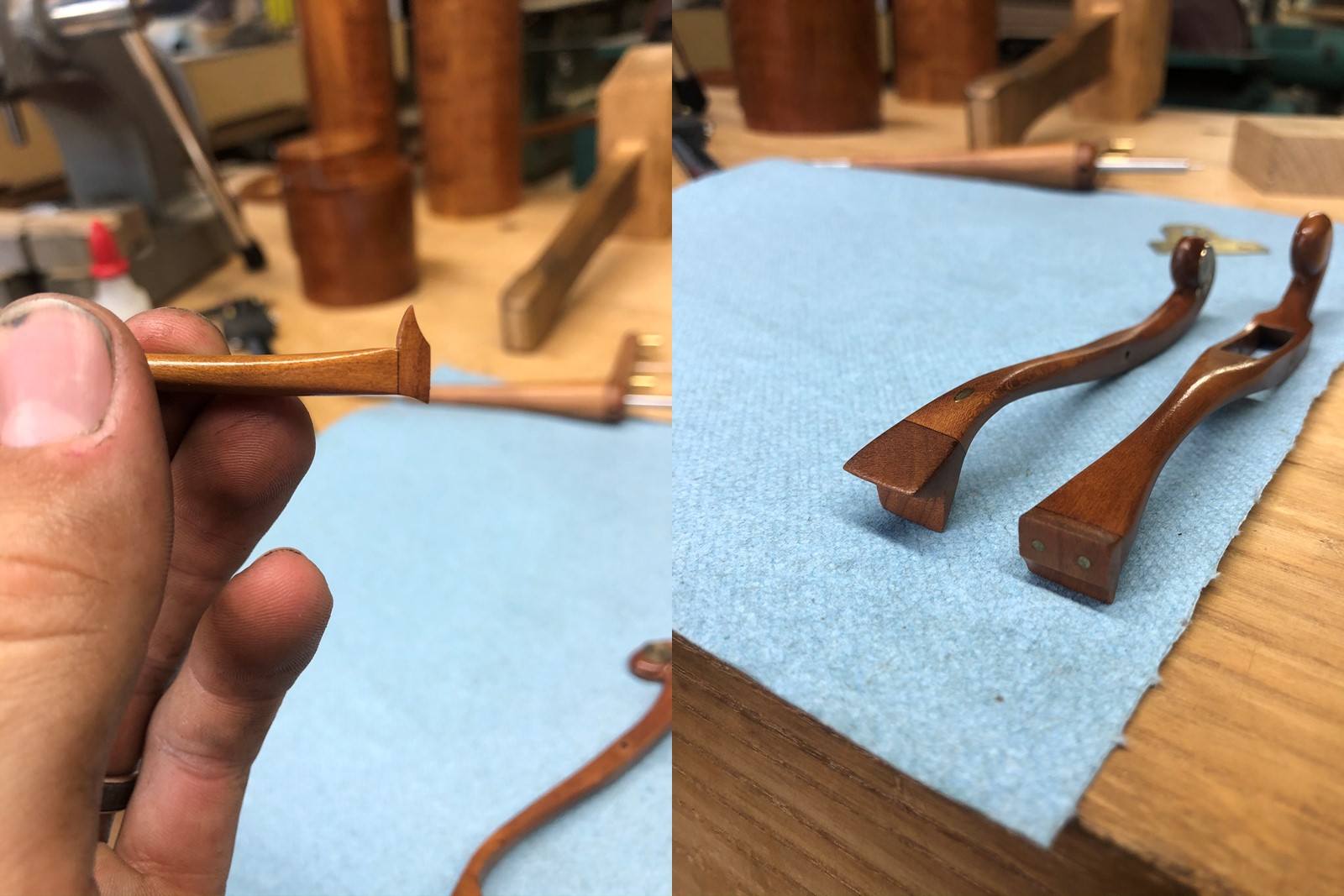 The huge escape wheel and centre gears are marvels in themselves, as every individual tooth on each wheel is a separate piece – with its grain aligned axially outward for maximum strength – that is then inserted into the rim of the wheel. The centre gear is constructed with Harrison’s “chordal pitch” gearing, while the small pinion gear in the centre of the escape wheel is a lantern construction made up of little pillars, done to reduce friction in the gear train. 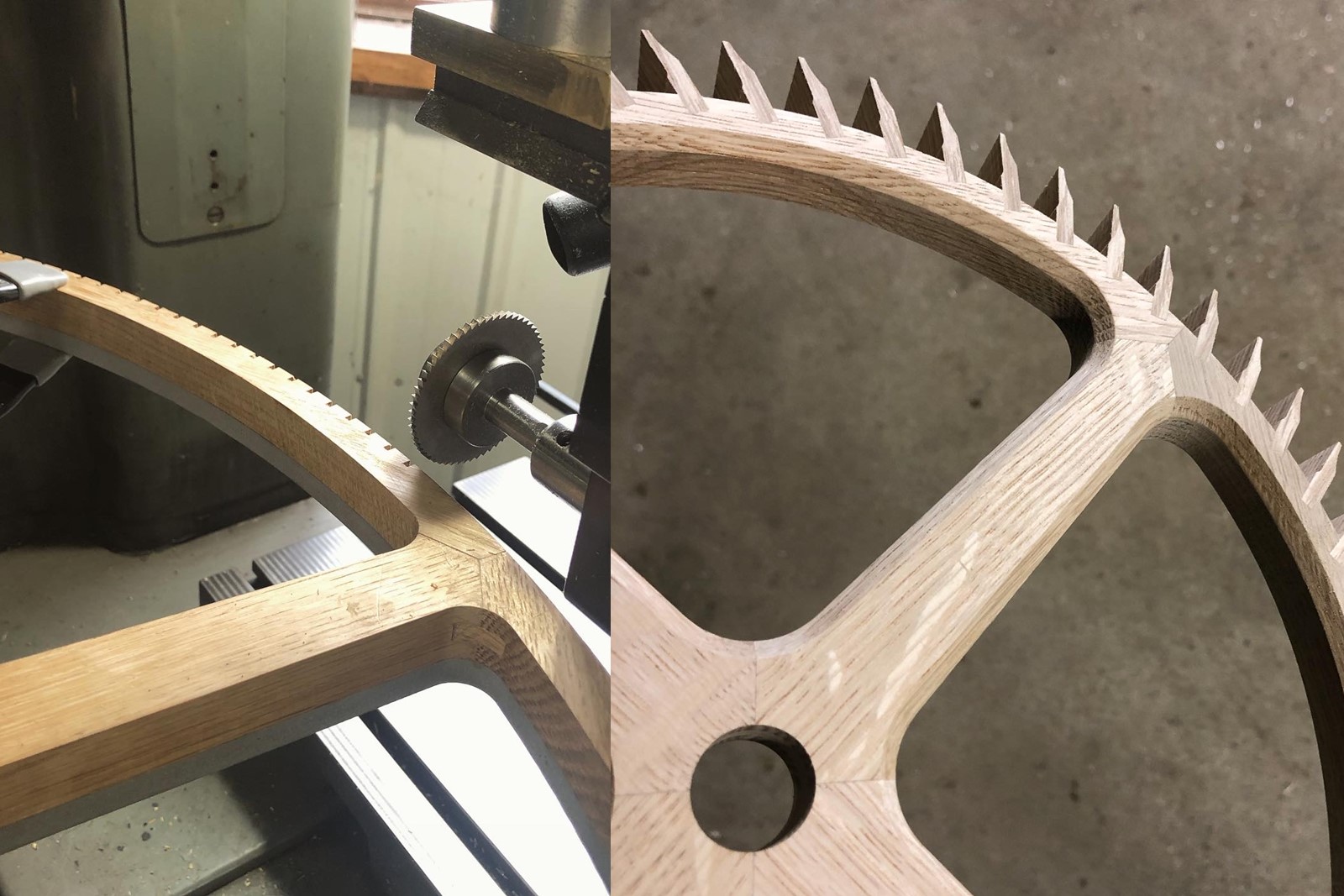 As with most clocks, power is stored by a set of gravity weights and pulleys. However, unlike conventional clocks that have the weight pulleys positioned closely, the weights on the Wind & Water are spaced far apart, adding to the organic appearance of the clock. 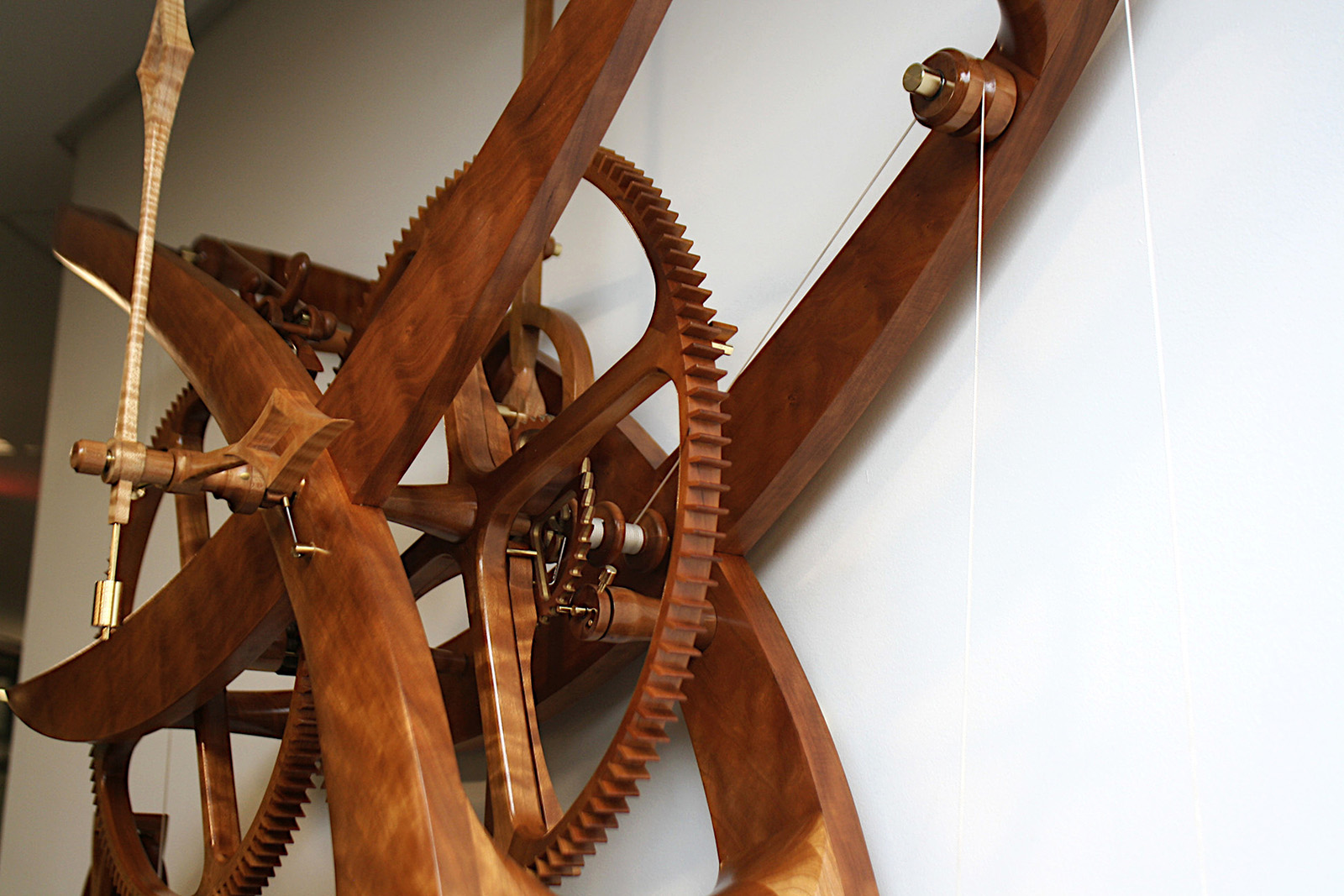 Unlike wristwatches, weight-driven clocks have an issue inherent in their winding – they are “wound” by raising the weights while rewinding the cable spool. But when that is happening, torque is not supplied to the escapement, meaning the clock stops.

As a result, a “maintaining power” mechanism is required (something also found in fusée and chain watches, often in the form of a differential gear). In the Wind & Water, an intermediate ratchet wheel with four slender hardwood springs are used as a temporary power buffer that continues to drive the clock while it is being wound. The result is one of the more beautifully intricate mechanisms within the clock. 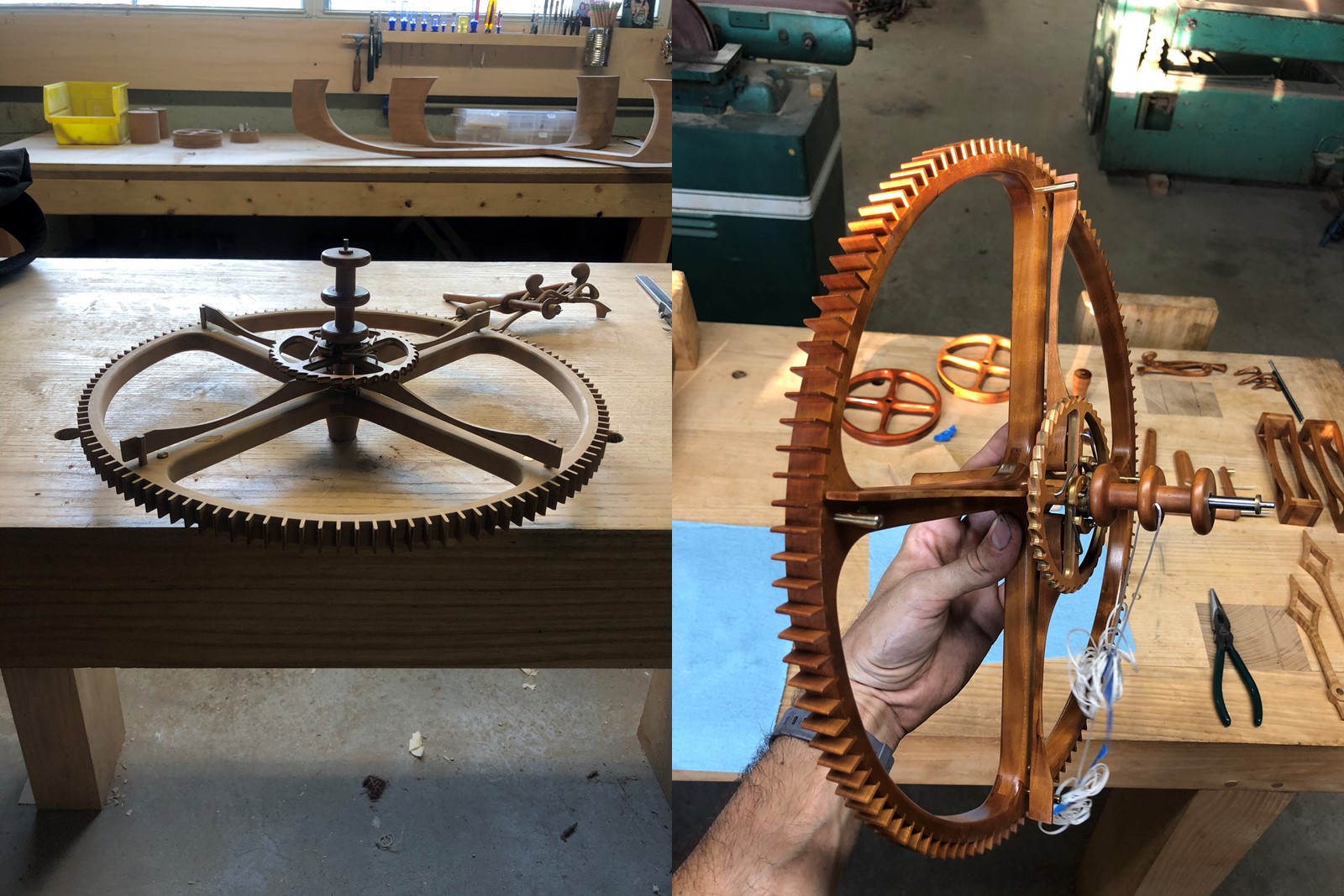 One curious element is occasionally used in clocks (but not wristwatches) – and appears deceptively simple – is the use of a daisy-wheel motion works. This is a compact daisy-shaped wheel mounted with an offset, which oscillates slowly at a 1:12 gear ratio for driving the hour hand. This elegantly simplifies the design of the motion works, doing away with unnecessary clutter of additional gears around the hands. 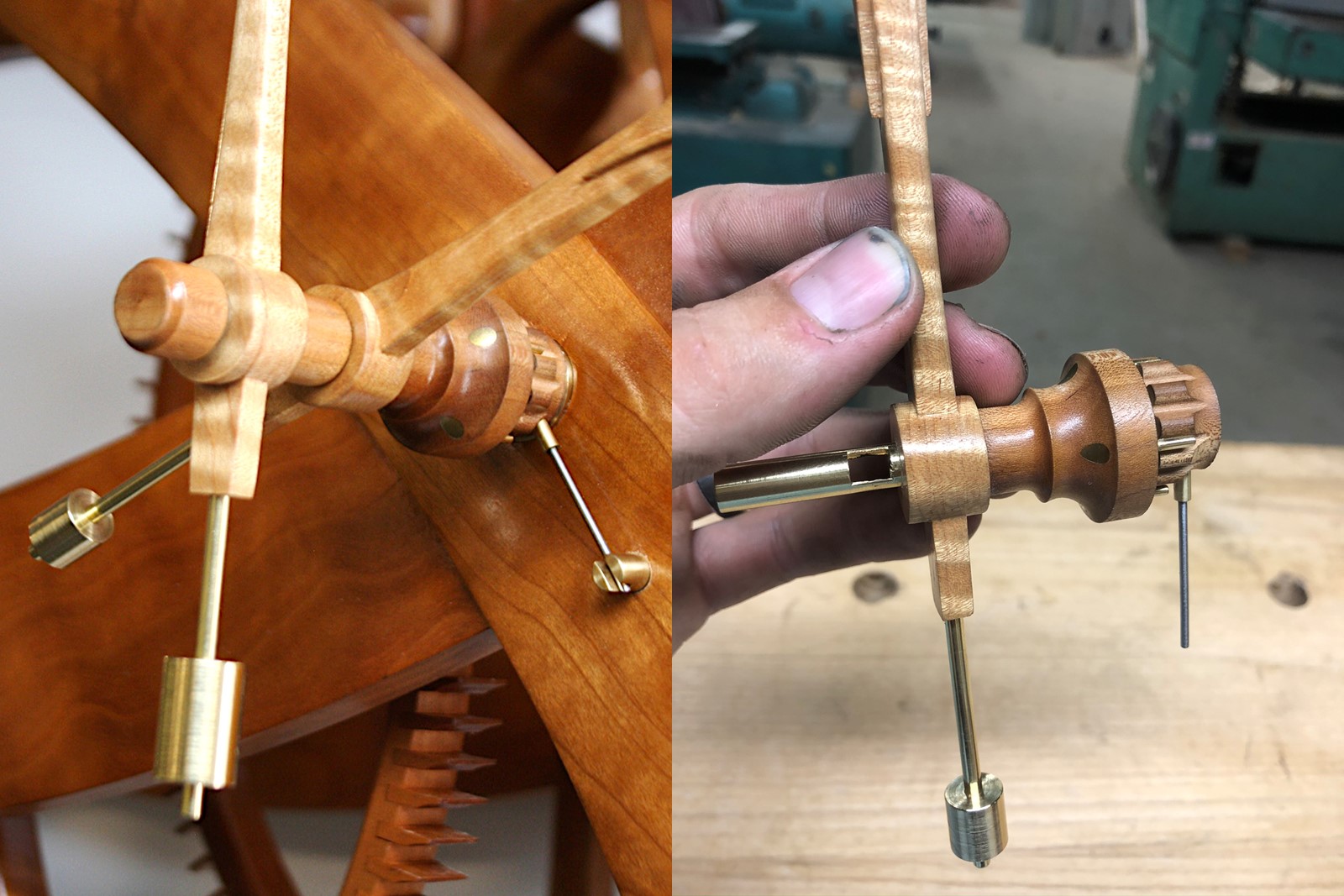 Limited edition: One-of-a-kind creation
Availability: Direct from Clockwright
Price: Bespoke clocks similar to Wind & Water start from US$35,000, going higher depending on the complications, complexity, or type of wood

Correction Jan 2, 2021: The clock is made predominantly from aged cherry wood, and not lignum vitae as stated in an earlier version of the article. Lignum vitae is only used for the bushings and rollers.