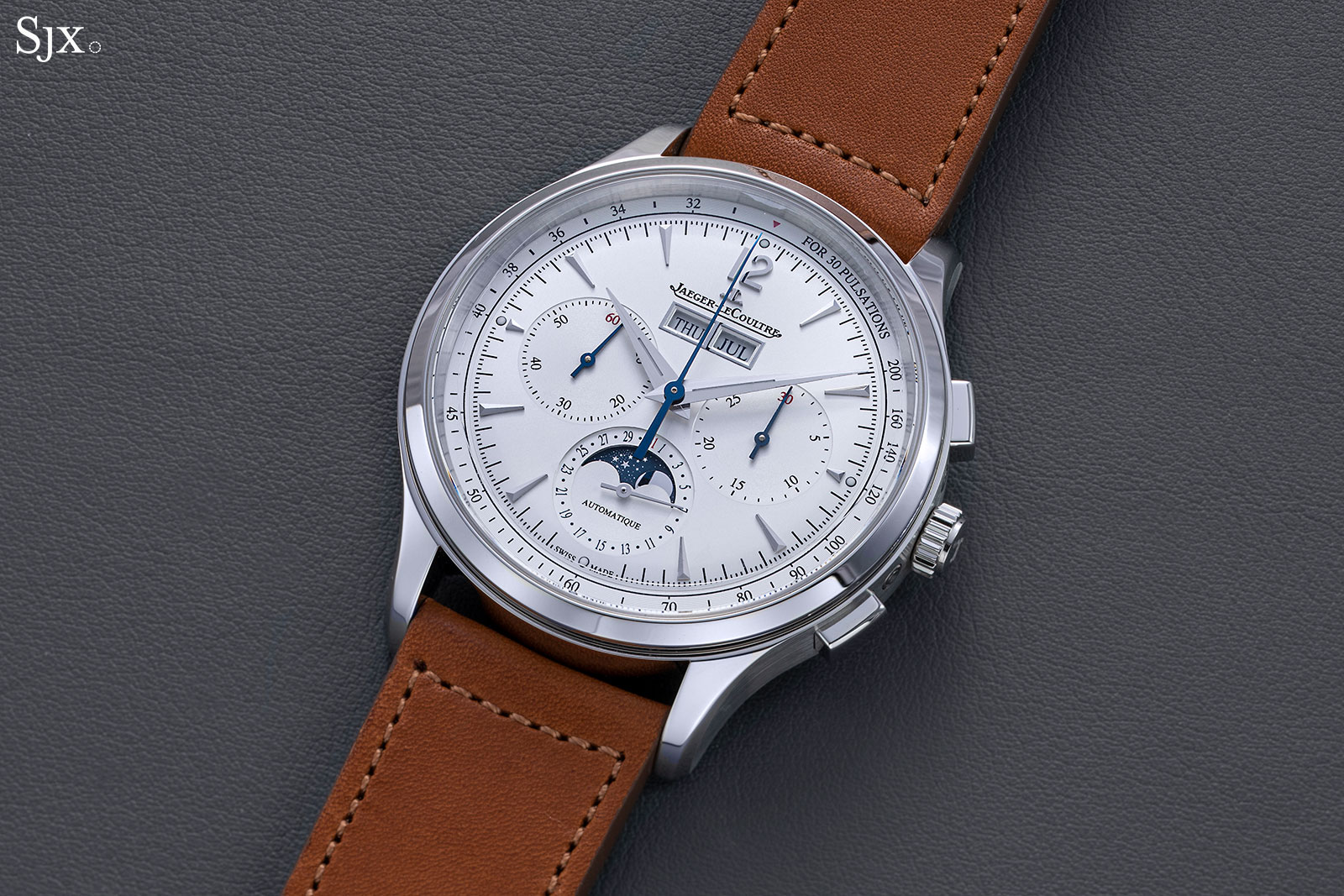 Taking its cues from the bestselling, 1990s collection of the same name, the Master Control is a gentleman’s watch in several flavours, all defined by a subtly retro style. Though a new model, the Chronograph Calendar retains the same style, while having a movement that’s the brand’s longstanding chronograph calibre with the addition of its well-known triple calendar module. 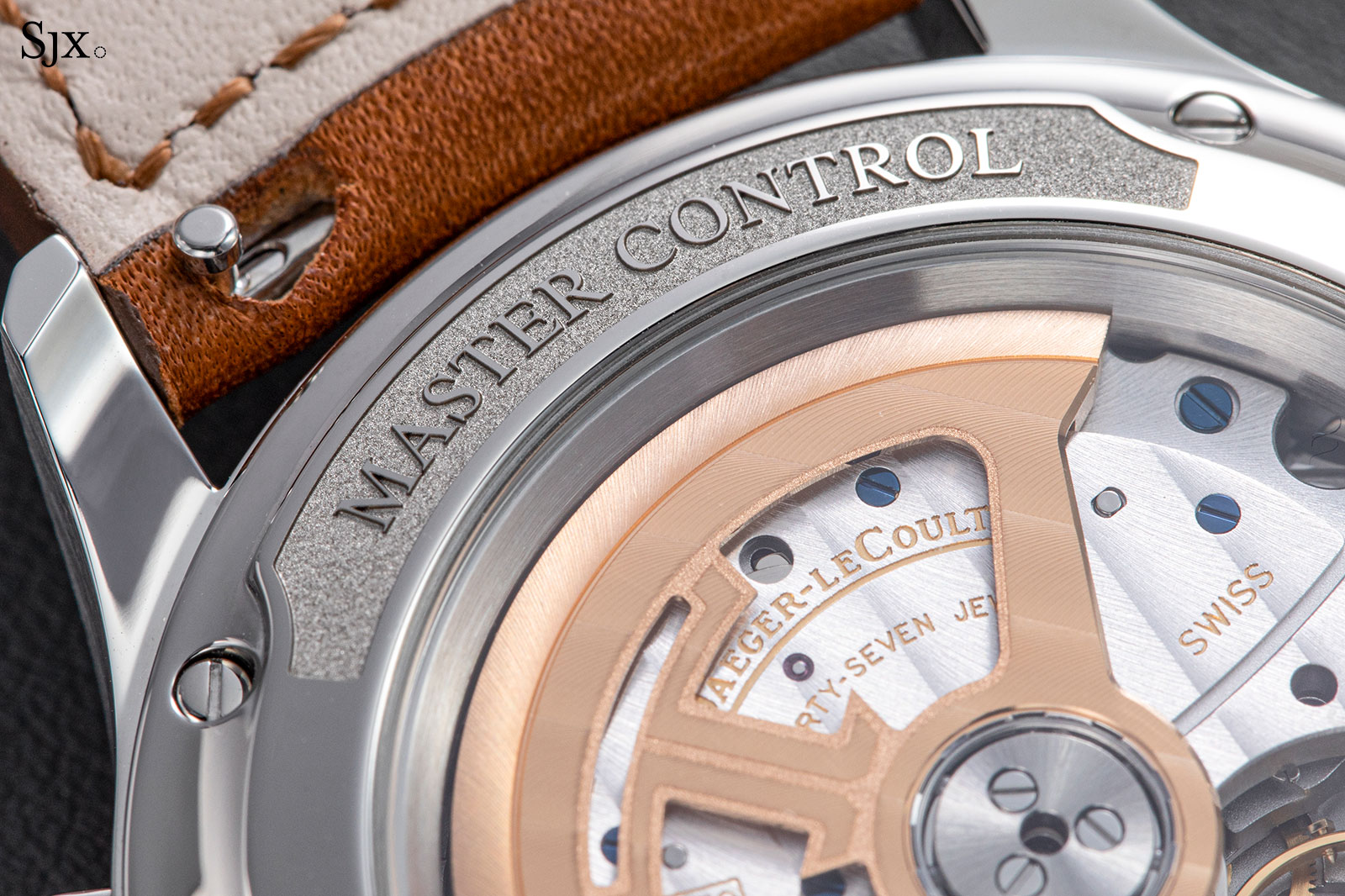 The Calendar Chronograph in rose gold (left) and steel

Visually, the Calendar Chronograph is a largish watch, though it doesn’t measure as such. At 40 mm wide and 12.05 mm high – close in size to the Rolex Daytona – the Chronograph Calendar is moderately sized, but the design means it looks a bit bigger.

The narrow bezel and light-coloured dial makes it seem wider, while the wide, vertical case flanks accentuate its thickness. As a result, the perceived size of the case makes it feel a bit too big for the retro-elegant design. Mechanically, the watch is similarly well done; the decoration is done by machine but appealing. Practically all establishment brands in this price segment rely on machine-applied decoration, but JLC has long been one of the best practitioners, so the movement looks good, with an open-worked, solid-gold rotor as a bonus.

Slim and smartly constructed, the cal. 759 inside is essentially the cal. 752 combined with a calendar module. Though not novel, it has a handful of details that help give it a bit more refinement, including the free-sprung, adjustable mass balance. 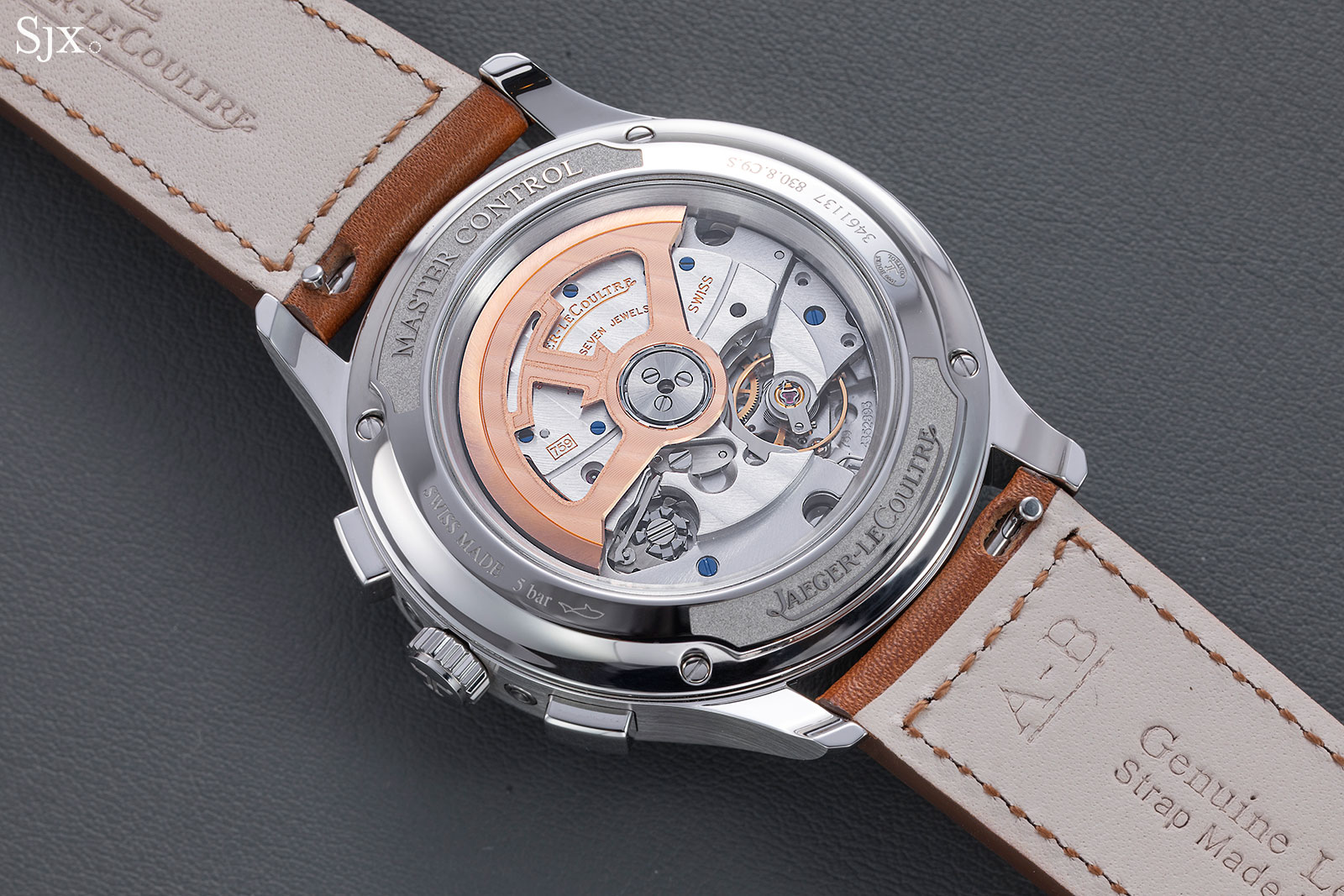 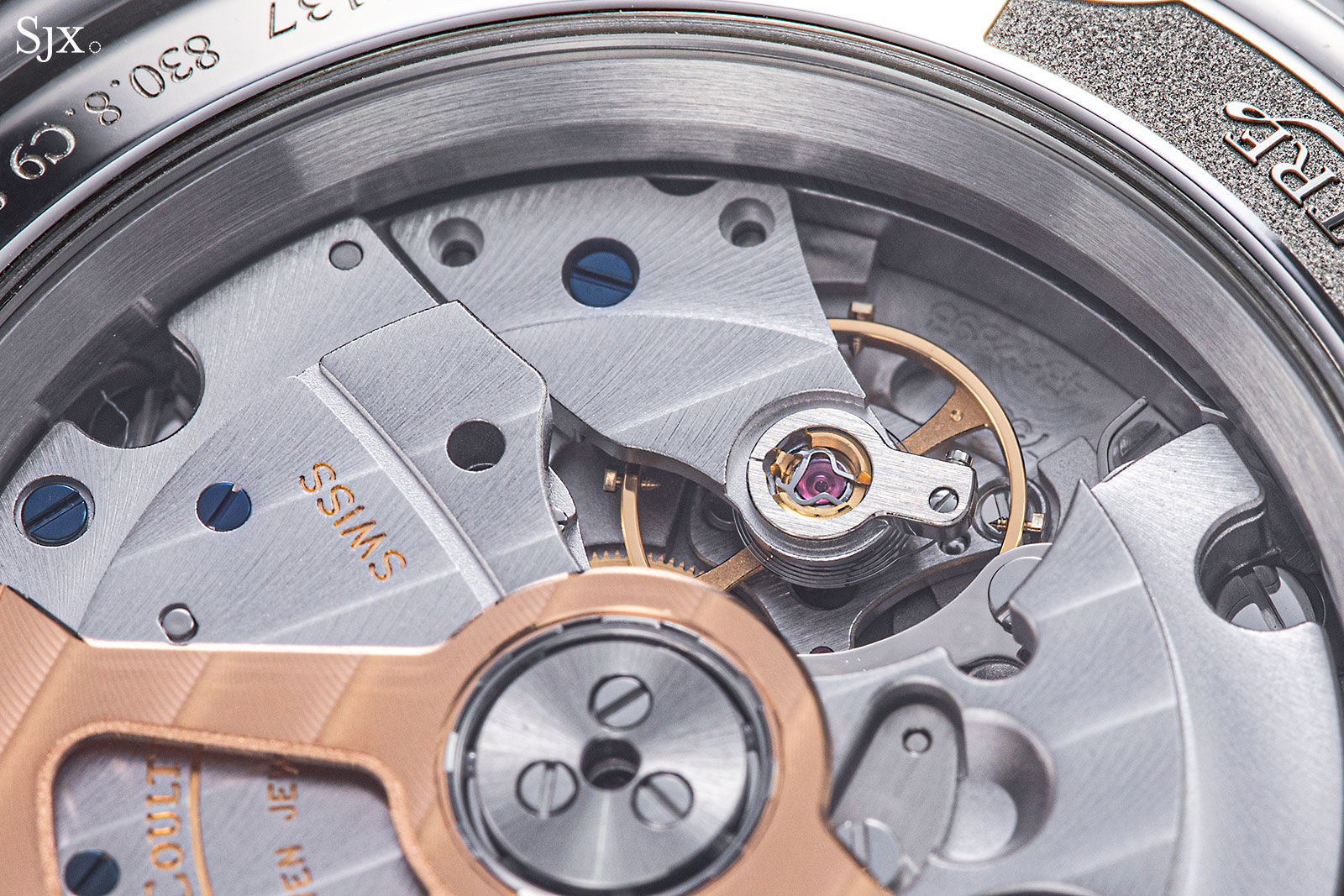 The Chronograph Calendar would be a value buy if it was priced right. At US$15,200 in steel and a little over US$28,000 in gold, it’s acceptable but verging on pricey. Though not exorbitant, the prices are high enough to be tangibly out of the norm relative to JLC’s historical price positioning.

In fact, the brand’s historical strength has always been in classically-designed watches with well-executed movements – which this is – but also competitive pricing. 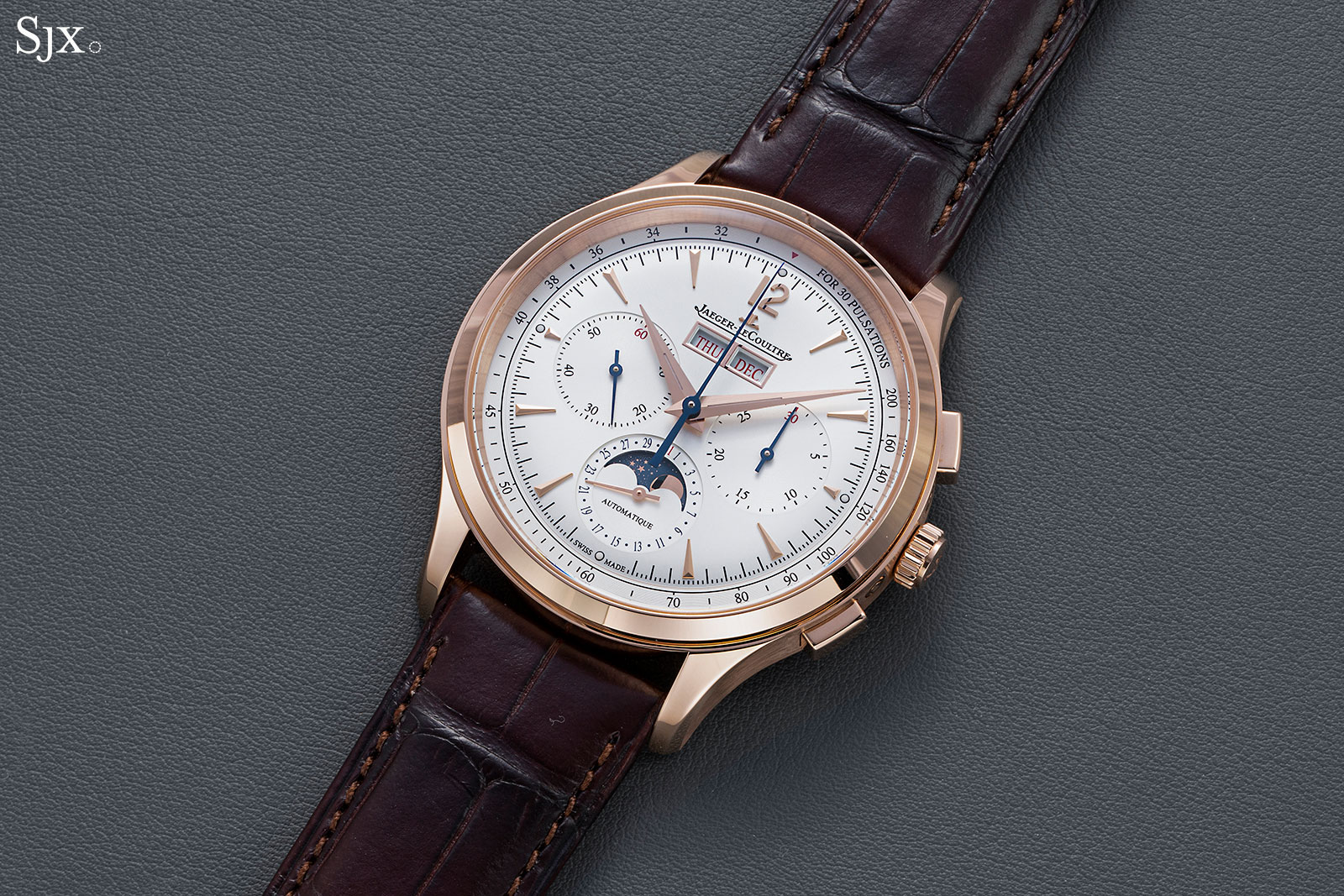 The styling of the new Master Control collection is modelled on the line of the same name that made its debut 1992. And the 1992 original was in turn based on the Futurematic wristwatch of the 1950s (which was a high-tech watch at time, with its crown on the case back). Despite the decades-old inspiration, the style remains appealing and fairly ageless, so its revival is a good thing. 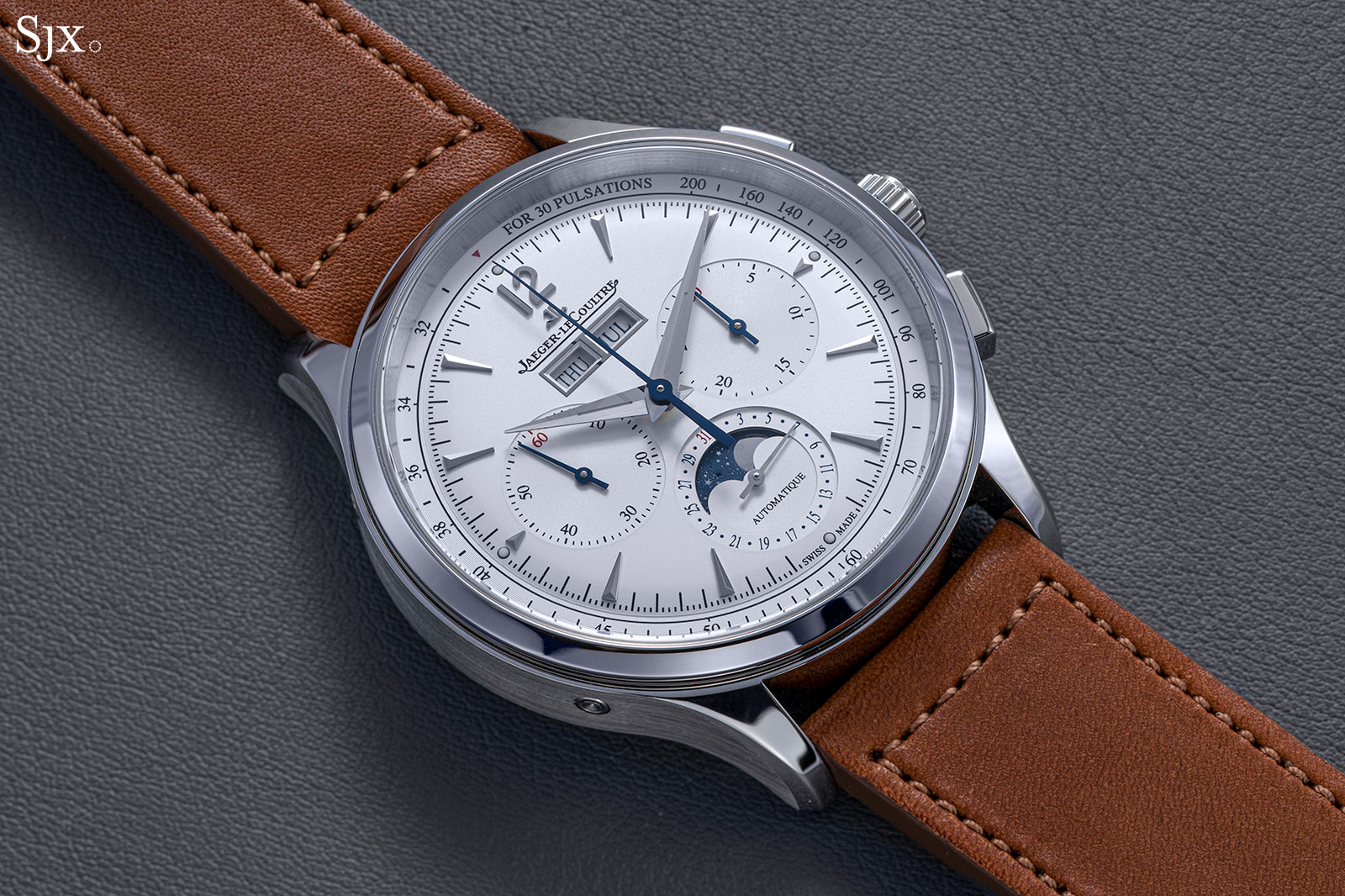 The dial is symmetrical and clearly laid out, with good proportions despite the largish case relative to the movement – 40 mm against a little under 26 mm. That said, the two windows for the day and month could be bigger, but they are sufficient as they are. 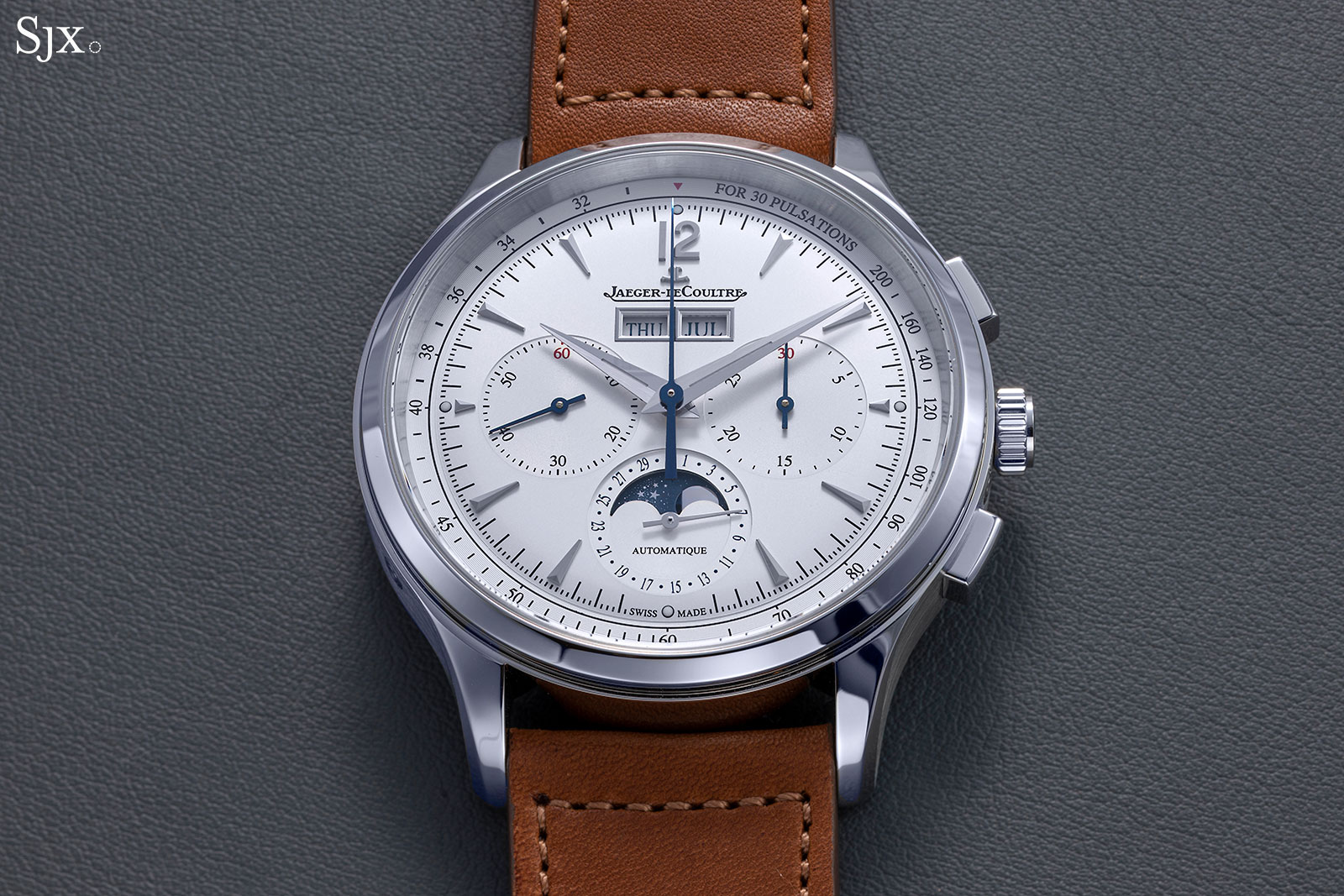 Still, this revival of the Master Control design still has frills that could have been be refined, or done away with altogether.

One is the mix of languages on the dial: the pulsometer scale is in English, while “Automatique” is obviously French and also a historical reference, being found on the 1990s Master Control. And the “JL” emblem along with the text logo under 12 o’clock leaves the area crowded and the dial a bit top heavy.

Also, extras like the red accents on the sub-dials and outer scale aren’t necessary. Historically the 12 o’clock marker was rendered in red to improve legibility in dim light by making clear the orientation of the dial, which is not necessary for the sub-dials or pulsations scale, since it is unlikely the chronograph is utilised in low light or darkness. 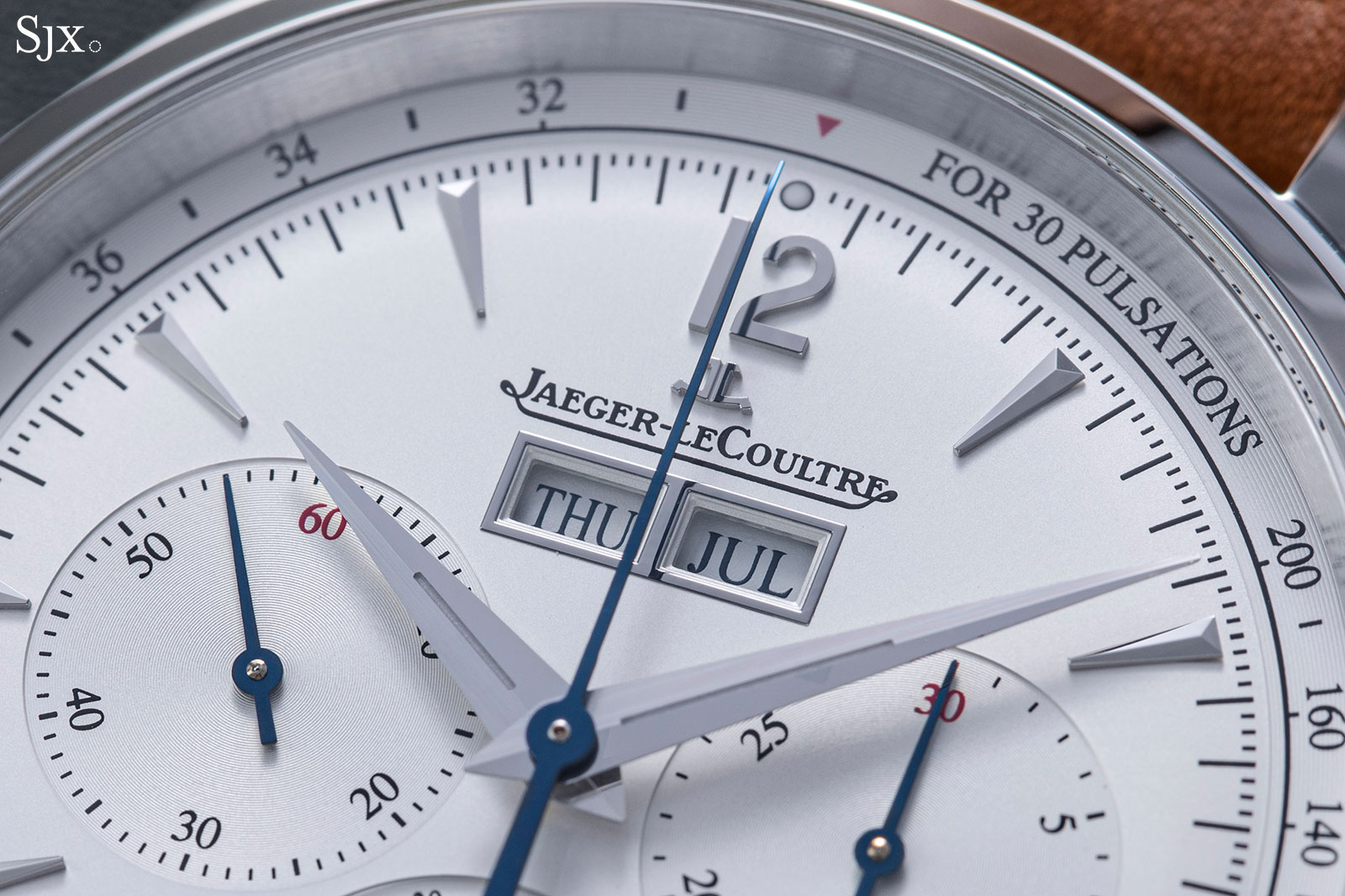 Up close the dial quality is solid, like the rest of the watch. The printing is neat and the hands cleanly finished, while the dial surface is a mix of textures and levels. The pulsometer scale is finished with stamped concentric rings, as are the sub-dials, while the main dial is a smooth satin. And the registers are recessed, with the date sub-dial sitting a little better than the chronograph counters. 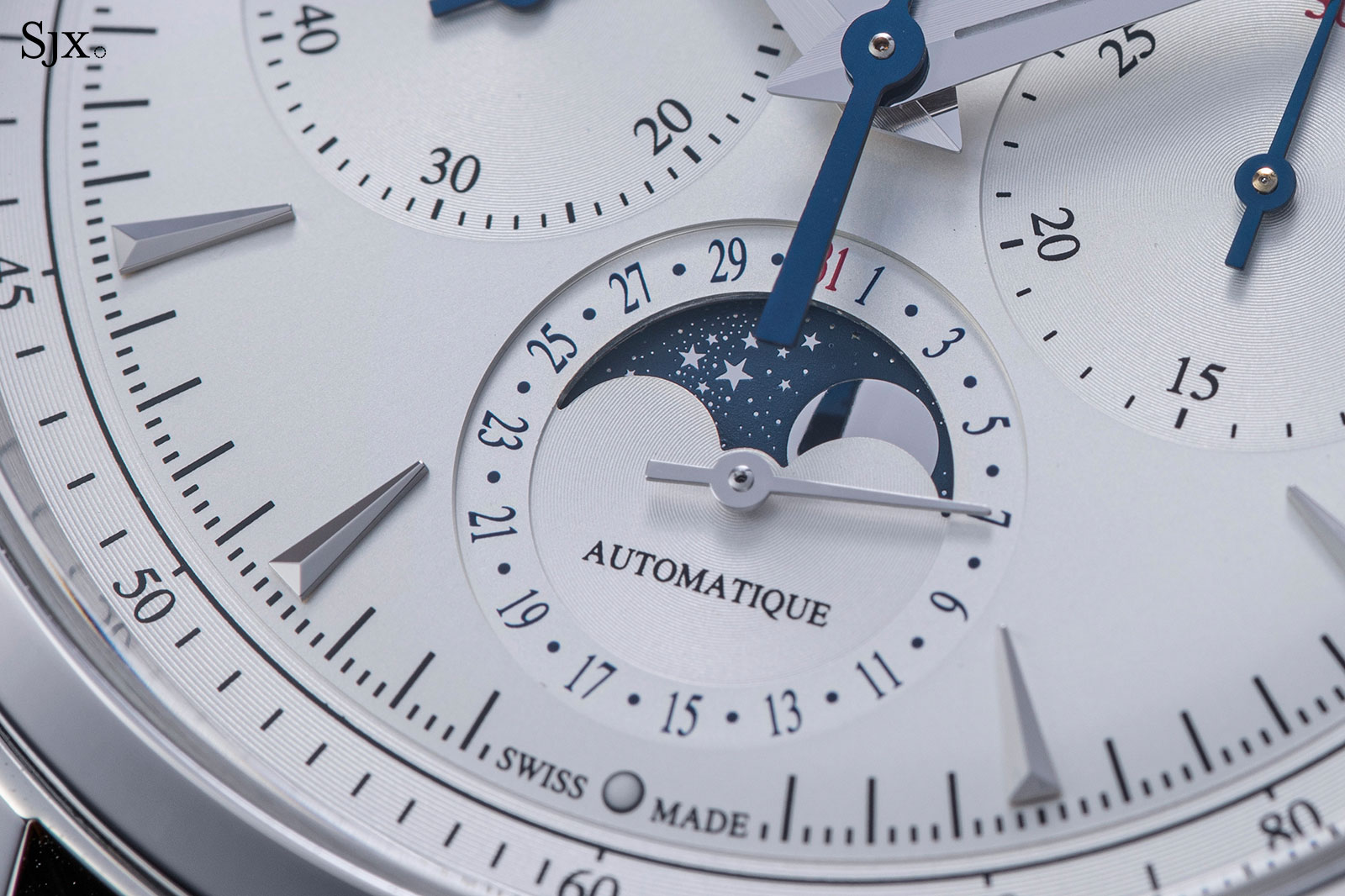 As it is with the dial, the case sticks to the template established by the 1990s Master Control, with a couple of enhancements. In fact, of all the external elements, the case has been most obviously improved over the 1990s models, no doubt as a result of better production technology.

The case retains the bevel on the length of the lugs found on the originals, but the bevel is now wider and sharper. It is also more prominent because the case has brushed flanks instead of a uniform polished finish. That said, the style of the case loses a bit of its elegance when scaled up. While the 1990s Master Control watches were typically 37 mm and thin, the Chronograph Calendar is a bigger watch.

The relatively flat bezel and back means a high case middle that emphasises the verticality of the case. Though the case is not excessively thick, the design makes it seem so. 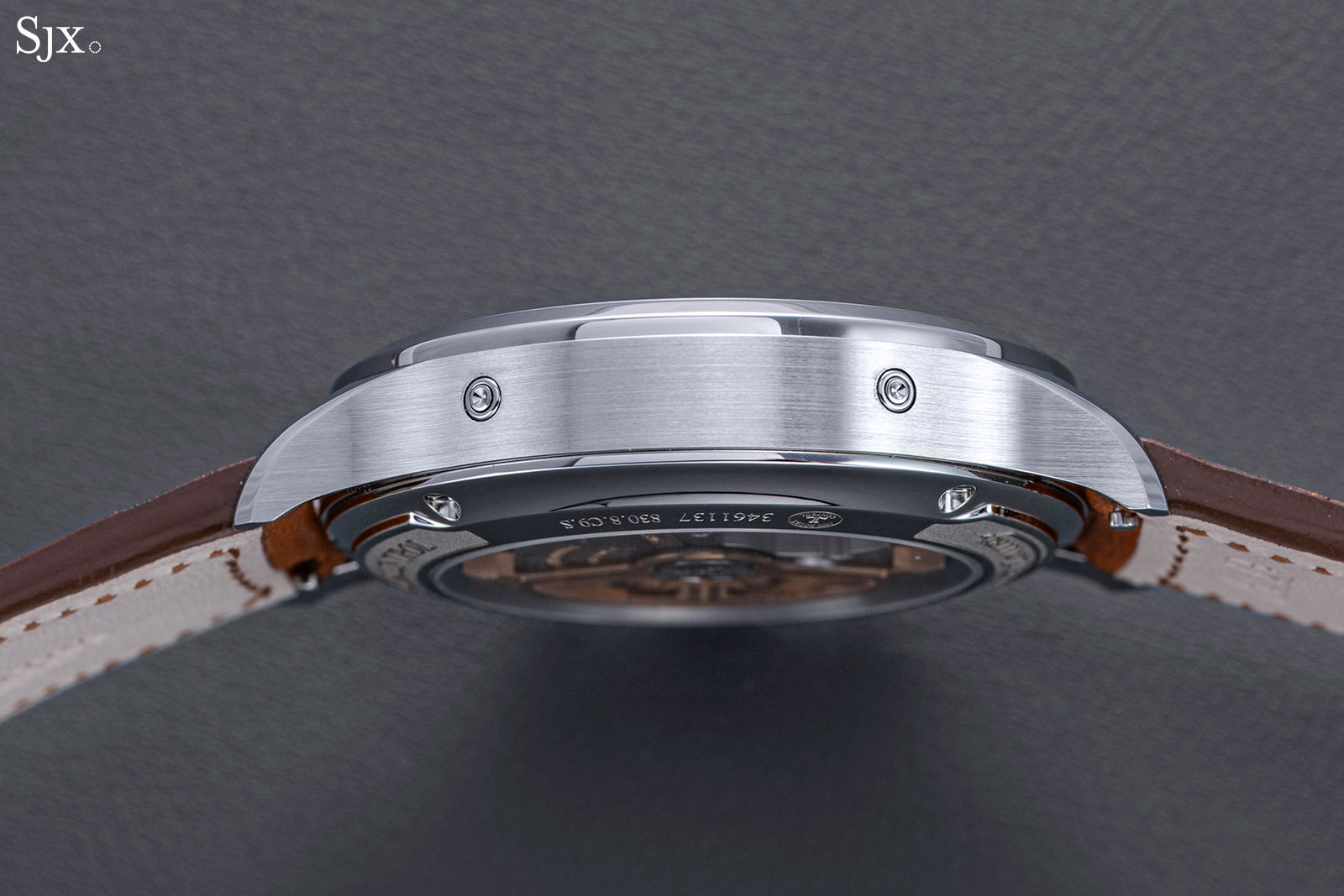 The recessed pushers on the case band are for calendar setting

The cal. 759 inside is, once again, good looking and workmanlike. Technically it has all of the features expected of a modern, high-end chronograph calibre, namely a column wheel, vertical clutch, and free-sprung balance, along with some less apparent details like a single-piece reset lever and “Magic Lever” winding.

Much of its construction is reminiscent of the Frederic Piguet 1185, long considered the reference in compact, refined chronograph construction. And it is also similar to chronograph calibres utilised by other Richemont brands like Panerai and Cartier, indicating shared development know-how between the sister brands.

But given JLC’s status as a venerable maker of complicated movements for itself and hallowed names in watchmaking, something a little more interesting would have been, well, more interesting. The cal. 759 decorated in a neat manner with all of the right colours – silvery rhodium plating, blued steel screws, and a 22k rose gold rotor – with good detailing, though evidently accomplished by machine. The rotor is 22k solid gold All the bridges feature stamped bevels

The gold version of the Chronograph Calendar is especially good looking. Made of a fade-resistant alloy named Le Grand rose gold – which is probably similar to Rolex’s Everose and Omega’s Sedna – the case is warm and weighty, making it tangibly more luxe than the steel model.

And it’s matched with rose-gold plate hands and hour markers, along with a gilded moon and stars on the moon phase disc, all of which makes for an appealing appearance. That said, the look doesn’t continue into the movement, which is identical to that of the steel version. At a bit over US$28,000, the gold Chronograph Calendar is decently priced as such things go, though closer to being pricey than its steel counterpart, and a distance away from being the sort of value proposition that JLC historically excelled at. The Master Control Chronograph Calendar is does well in all aspects – design, finishing, and price – although it is not quite outstanding in any one. Though largish, it still manages to retain the retro-elegant style of the original Master Control. Still, one can’t help but feel JLC could have done a little better by sharpening a handful of details.