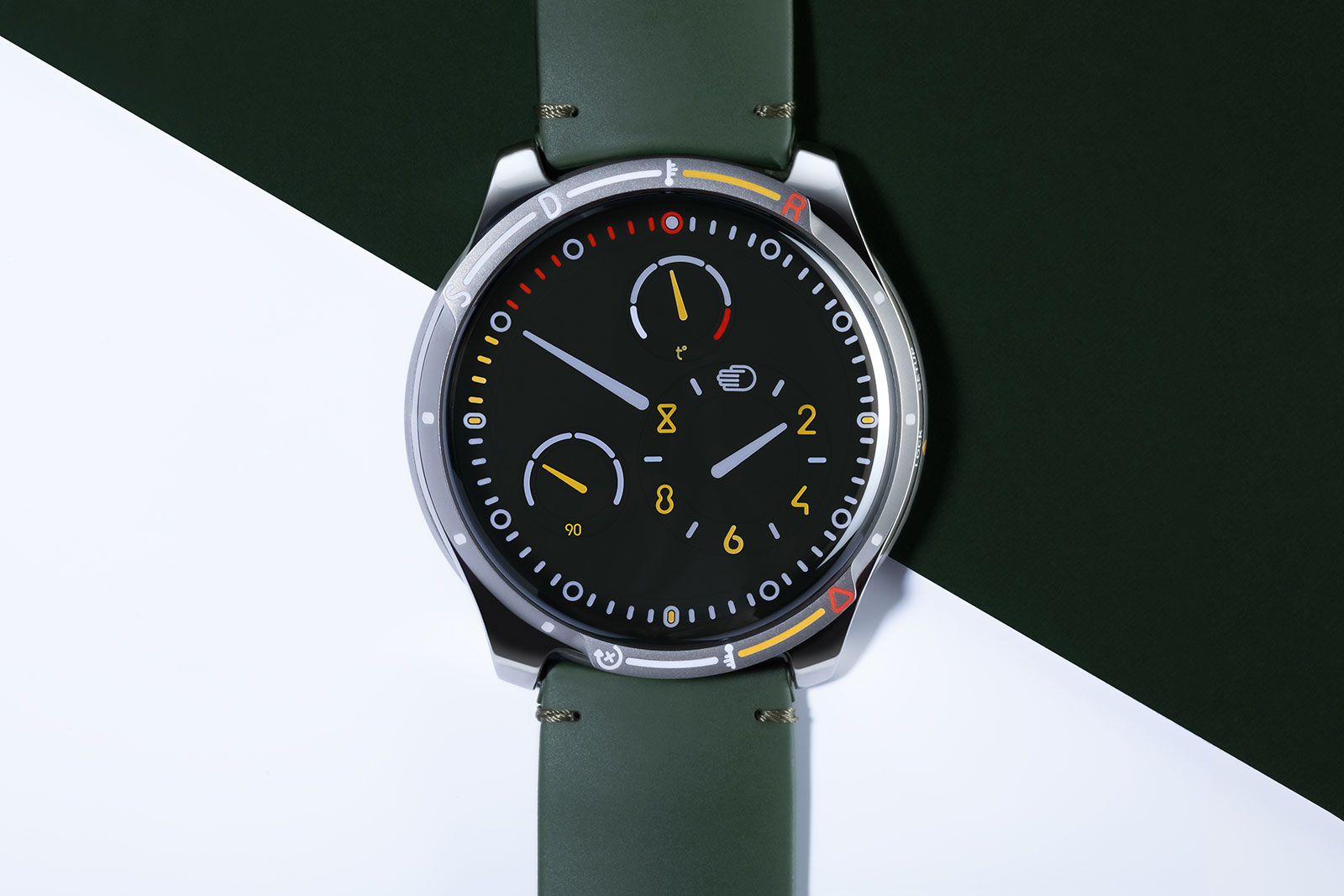 Conceived to mark the brand’s 10th anniversary, the “X” series of watches is a quartet of models that started with the Type 1 Slim X, and now continues with the brand-new Type 5X Automobili Amos.

Equipped with a bezel to measure turbocharged engine warming and cooling times, the Type 5X is the result of a collaboration between Ressence and Italian race-car driver Eugenio Amos.

Husband to a member of the Missoni fashion dynasty, Mr Amos’ namesake company is best known for the Lancia Delta Futurista “restomod”, a race car based on the 1980s Lancia Delta, a car famous for dominating the World Rally Championship in the late 1980s. The concept is similar to what Singer Vehicle Design is doing for the Porsche 911 (specifically the 964 of the early 1990s); Singer, as it happens, has its own line of wristwatches. 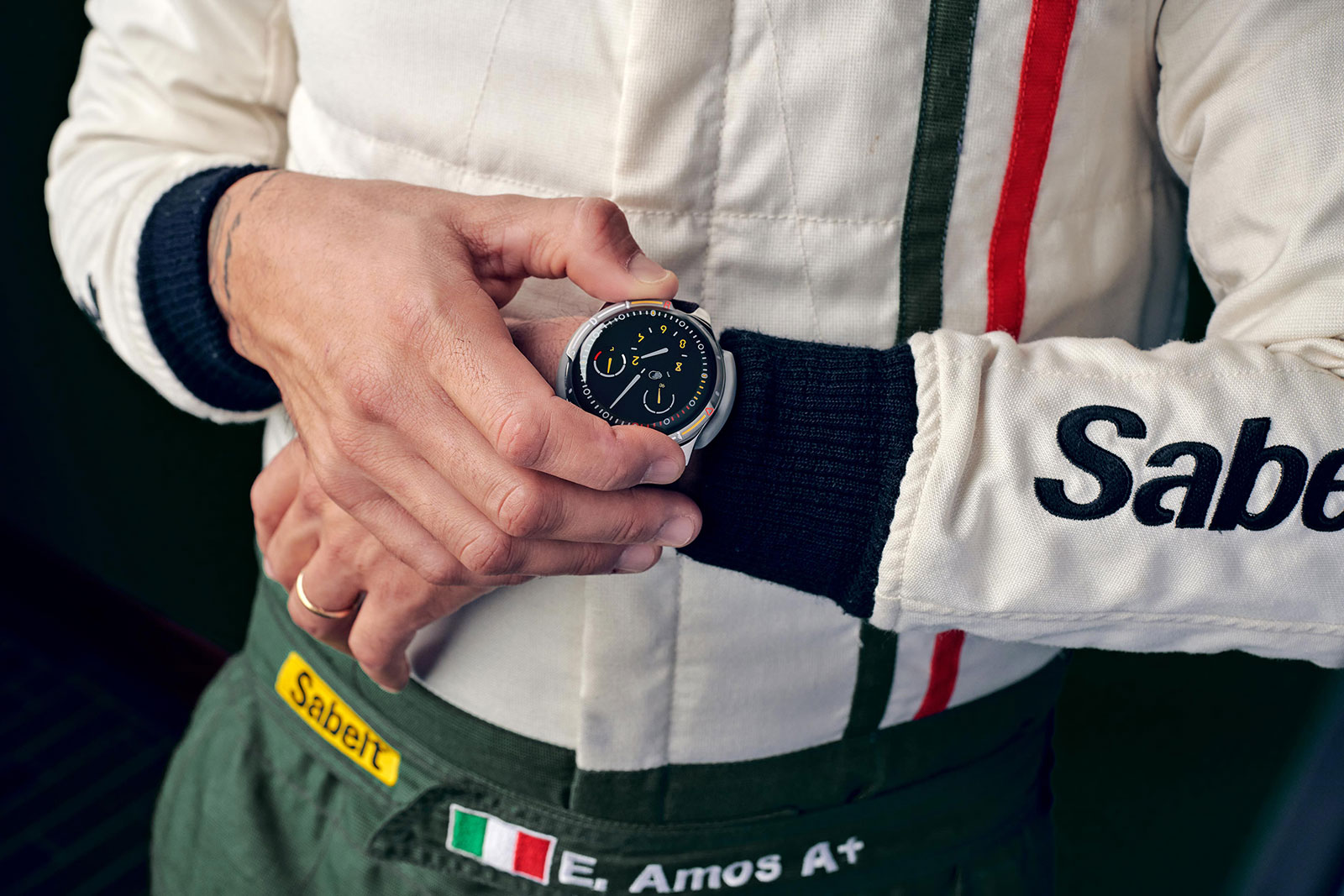 The Type 5X is a good-looking variation of the standard Type 5. The tweaks to the typography, colours, and bezel are attractive. But it has a narrow appeal, basically car enthusiasts who appreciate the history of the Lancia Delta and that era of automobile racing.

Because it costs not much more than the standard model, the Type 5X is probably a no brainer for anyone who does appreciate that history. But for anyone else it is a bit too esoteric. 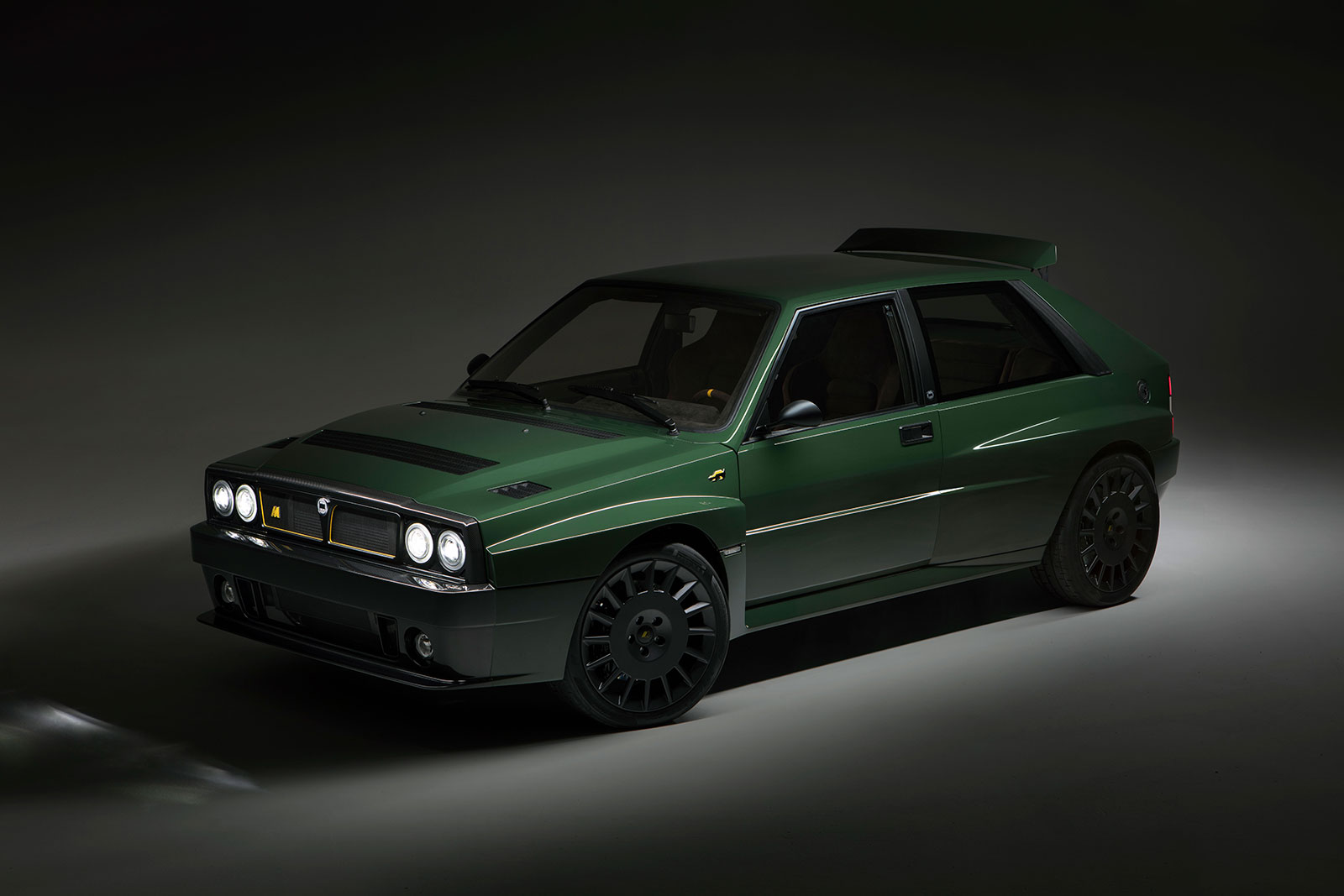 More broadly, the strengths and weaknesses of the Type 5X are the same as those of the standard model. The watch is ingenious, inventive, and truly unique, while possessing elegance in design and tactile feel. That said, one of the signature features of the watch, setting and winding the movement via the case back, can be a bit fiddly at times.

The Type 5 is also expensive – the standard model is already about US$35,000 – despite its technical qualities, largely because Ressence produces watches on a small scale, resulting in no economies of scale.

The most obvious automotive feature of the Type 5X is its bezel, which is meant to be rotated into alignment with the minute hand before and after a race, so that the hand can be read against its twin scales.

The bezel is graduated to measure the 15-minute warmup and 10-minute cool down times required for a turbocharged engine. The longer scale is for warming up, marked for “start”, “drive”, and “race” with “S”, “D”, and “R” respectively. And the smaller scale is for cooling down at the end of the race. 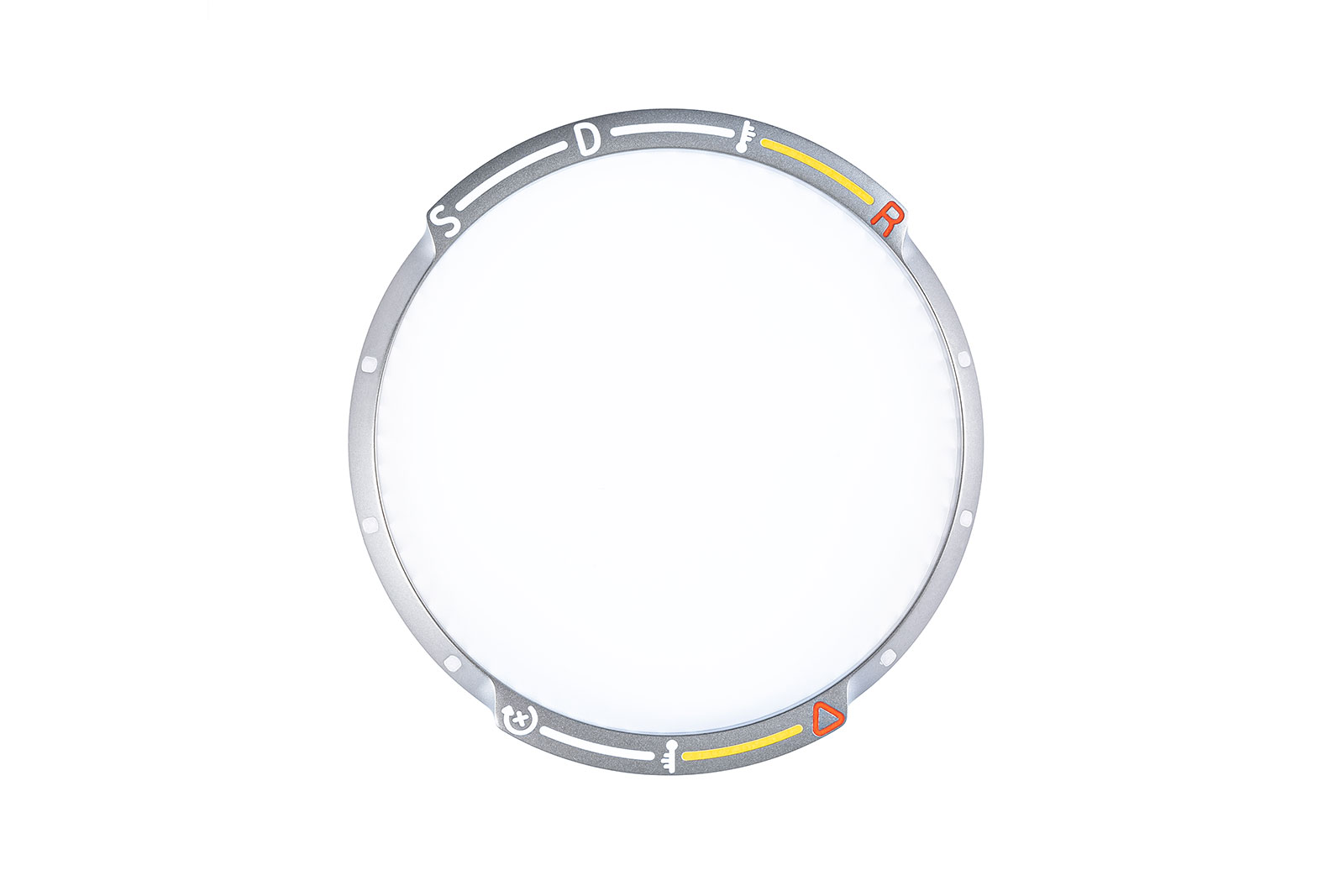 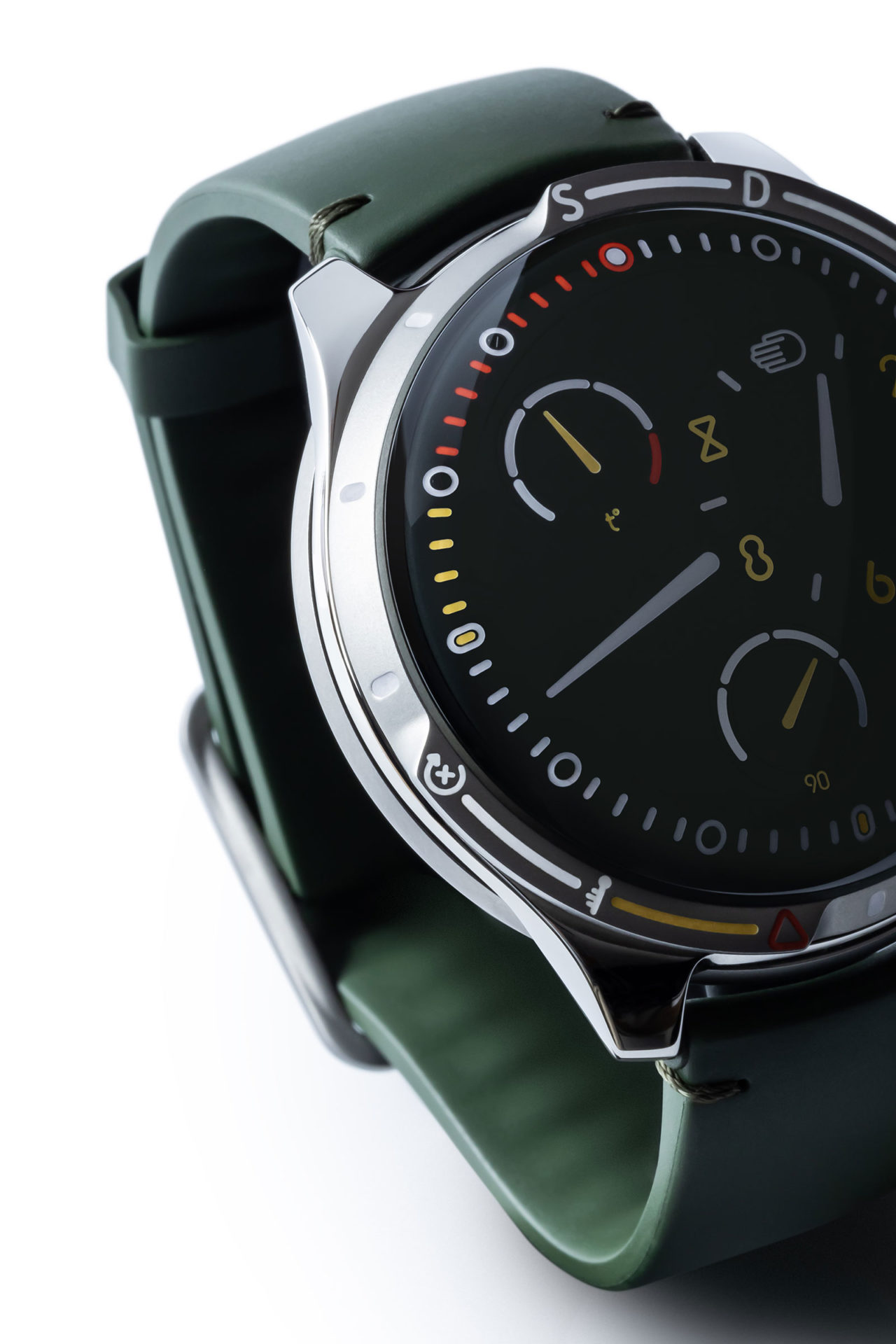 The Type 5X is also delivered with an accessory to make it a true driver’s watch. A small rubber mount can be fitted on the back of the watch, so that the case can sit on the side of the wrist, allowing the watch to be read while driving. 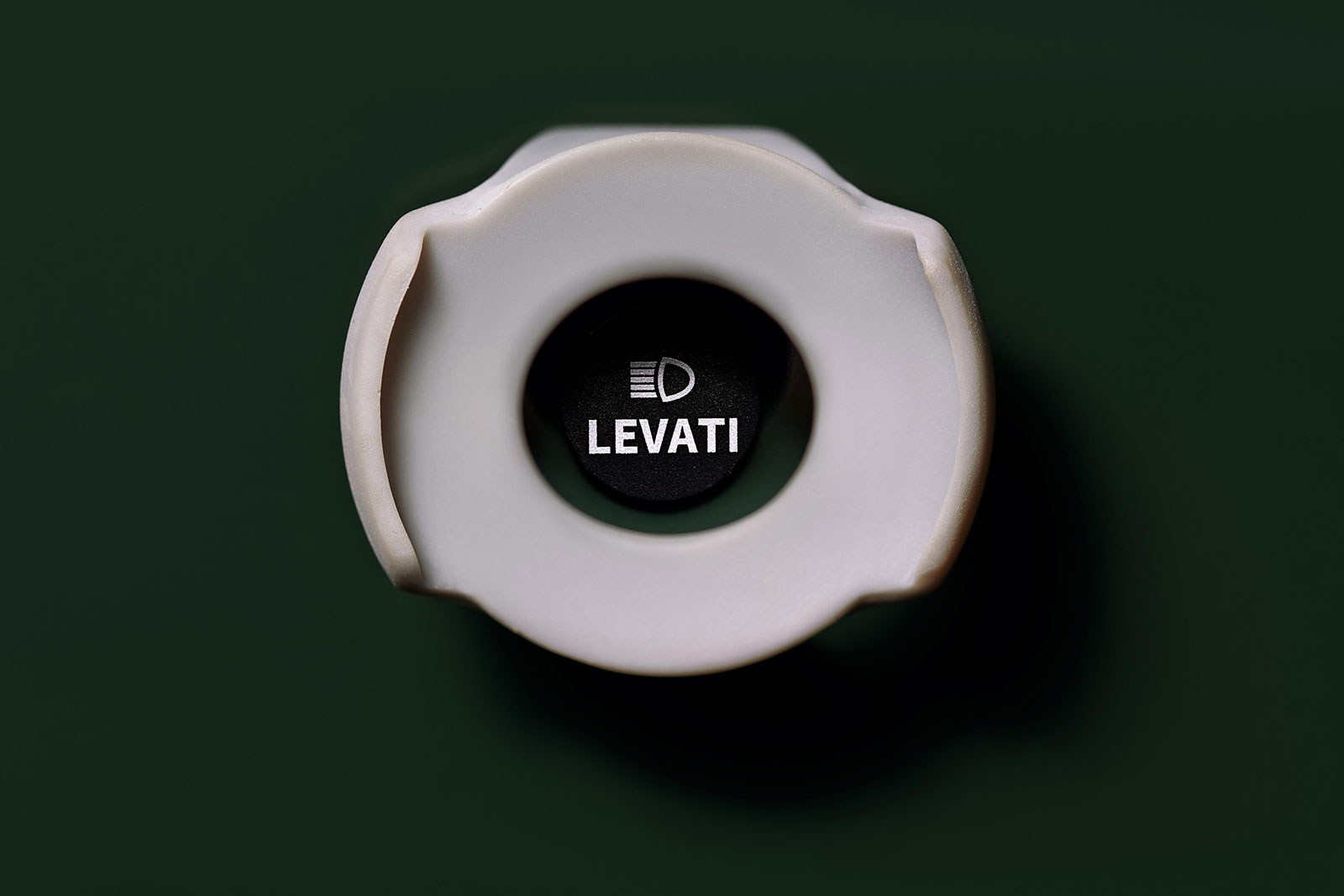 The rubber mount for the wrist 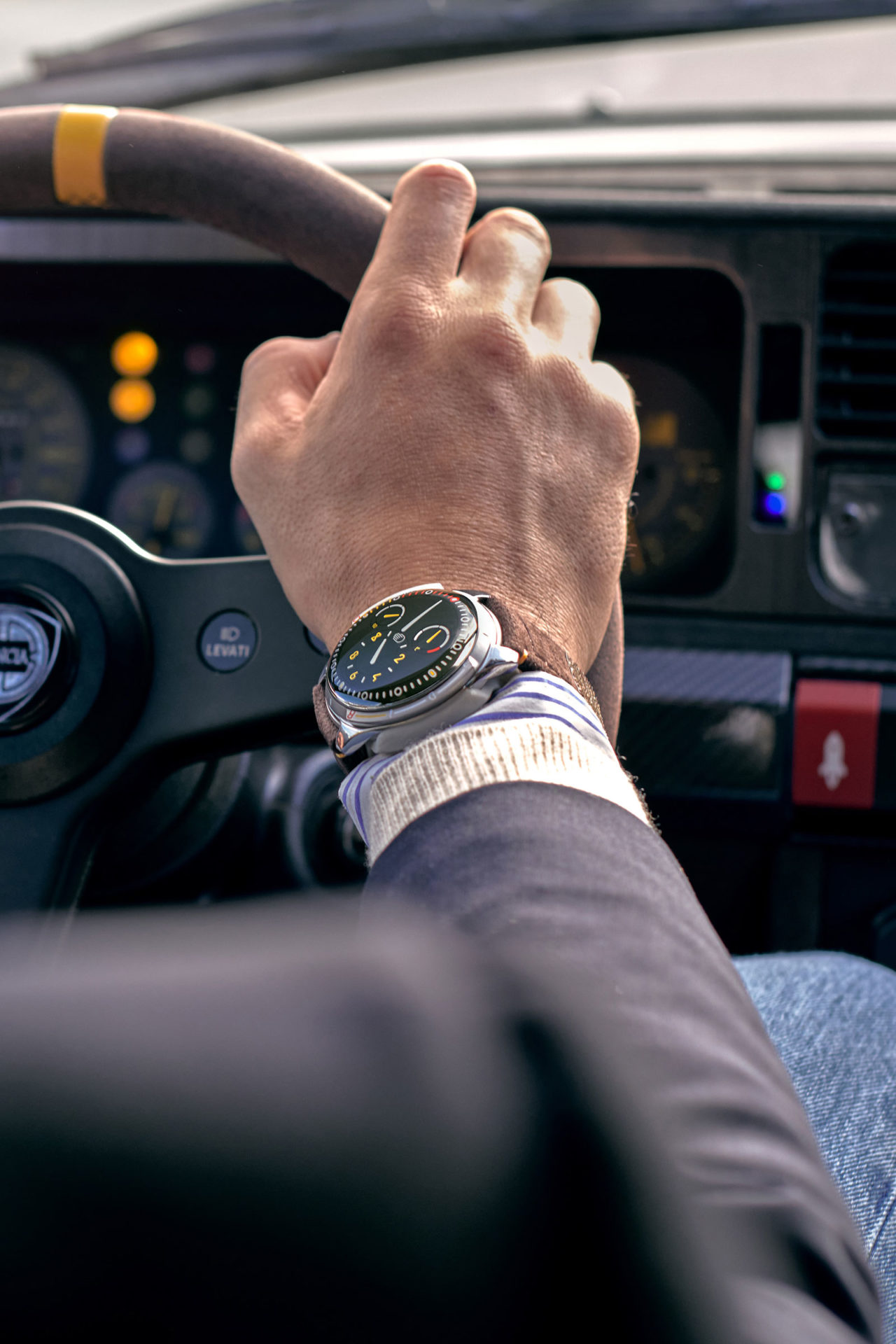 The bezel is matched with a modestly redesigned dial inspired by dashboard instruments, and accented with yellow and red to echo the colours on the bezel. The dial itself is a dark green, though it appears even darker due to the oil-filled void in-between the dial and crystal.

A signature feature of Ressence, the oil filling is meant to improve legibility as it creates the optical illusion that the dial is pressed up against the underside of the crystal. 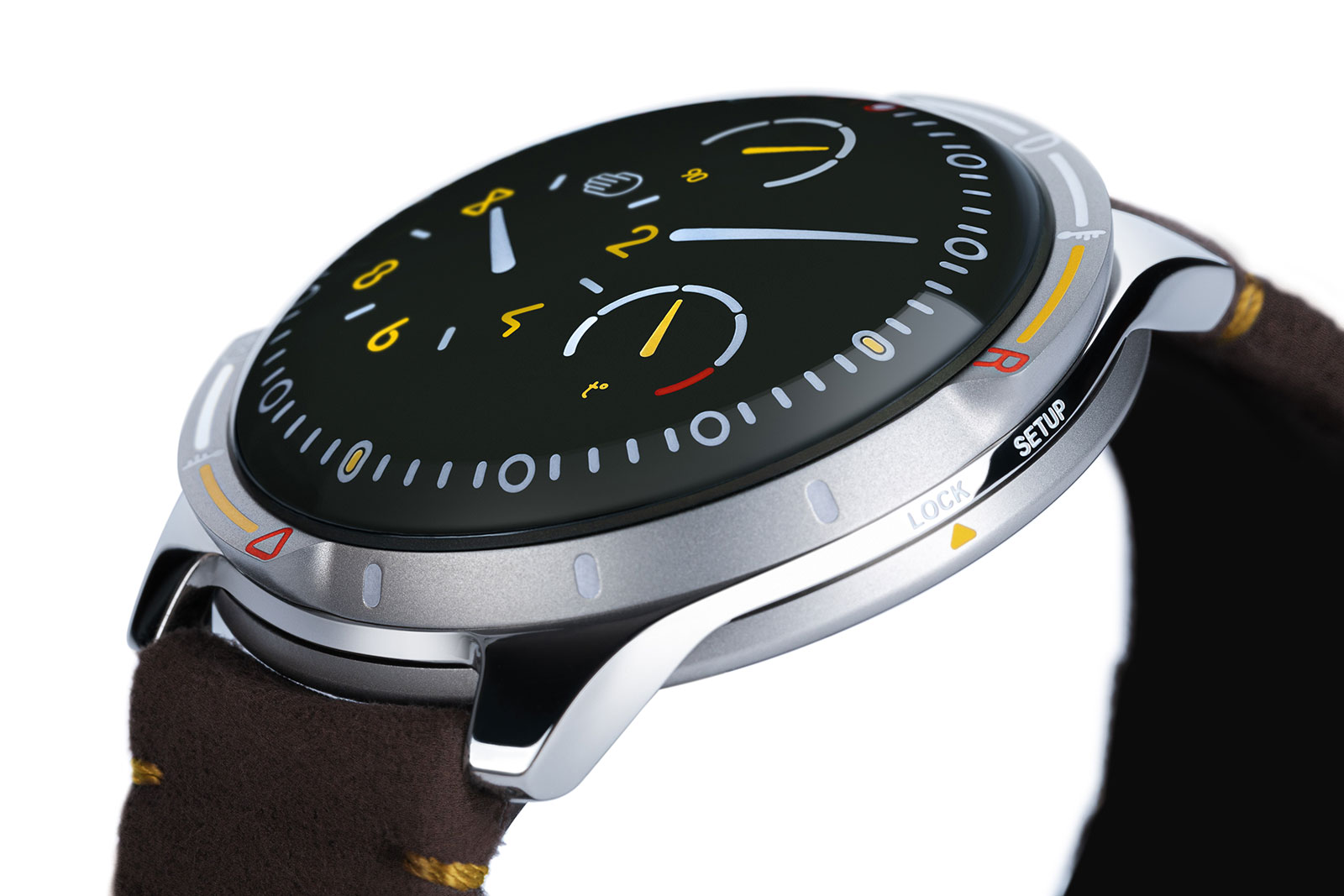 The other signature Ressence invention is the Ressence Orbital Convex System (ROCS), a time display that relies on planetary discs that circle the dial. They are driven by a mechanism within a discrete module that has no physical connection to the ETA 2824 base movement within the case.

The case is titanium and 46 mm in diameter, while being 15.5 mm high. Though its measurements are large, the case sits flat and sleek on the wrist, due to its streamlined design and short lugs. 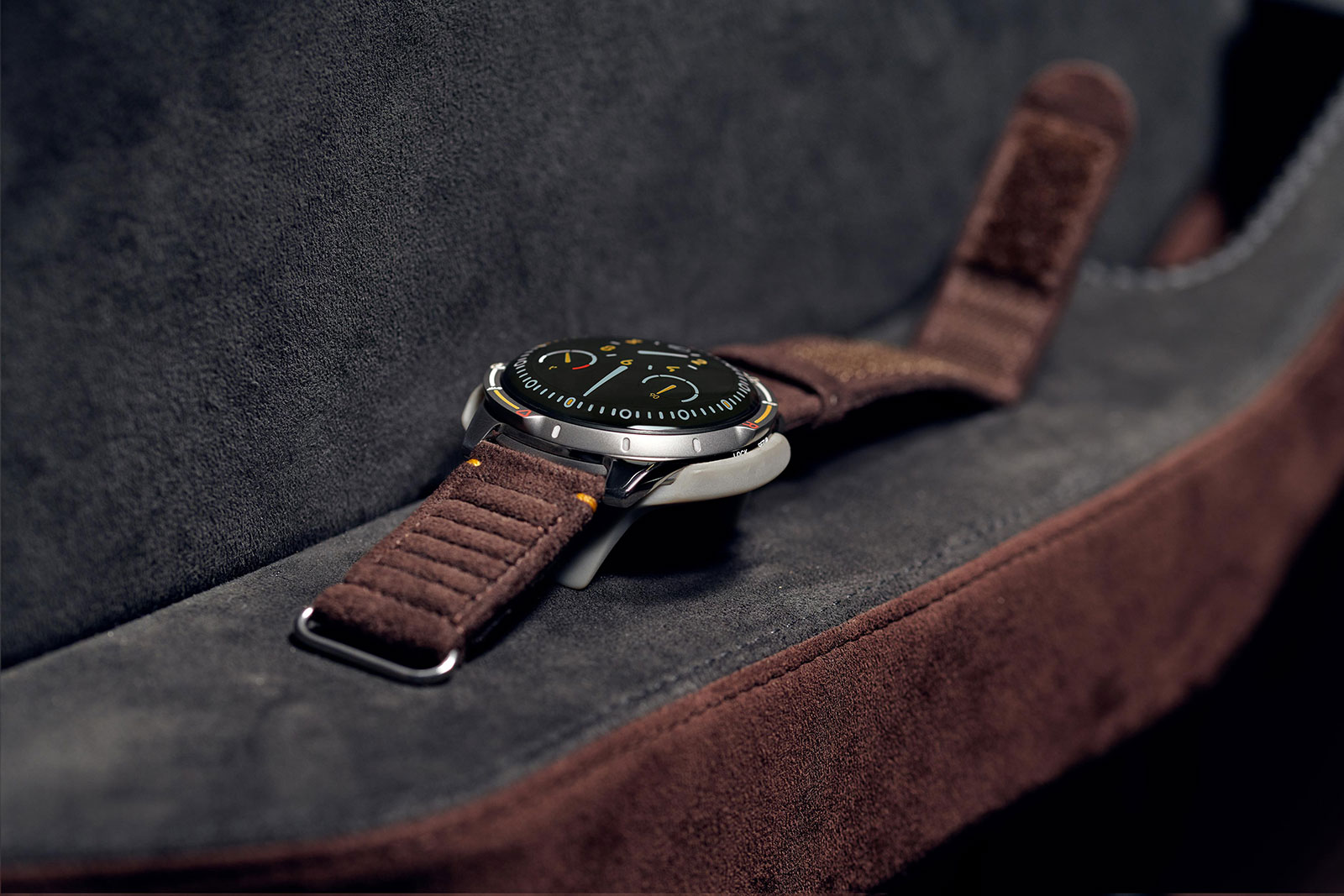 The case also has no crown, because both setting and winding are accomplished by rotating the case back, another trademark feature of Ressence. 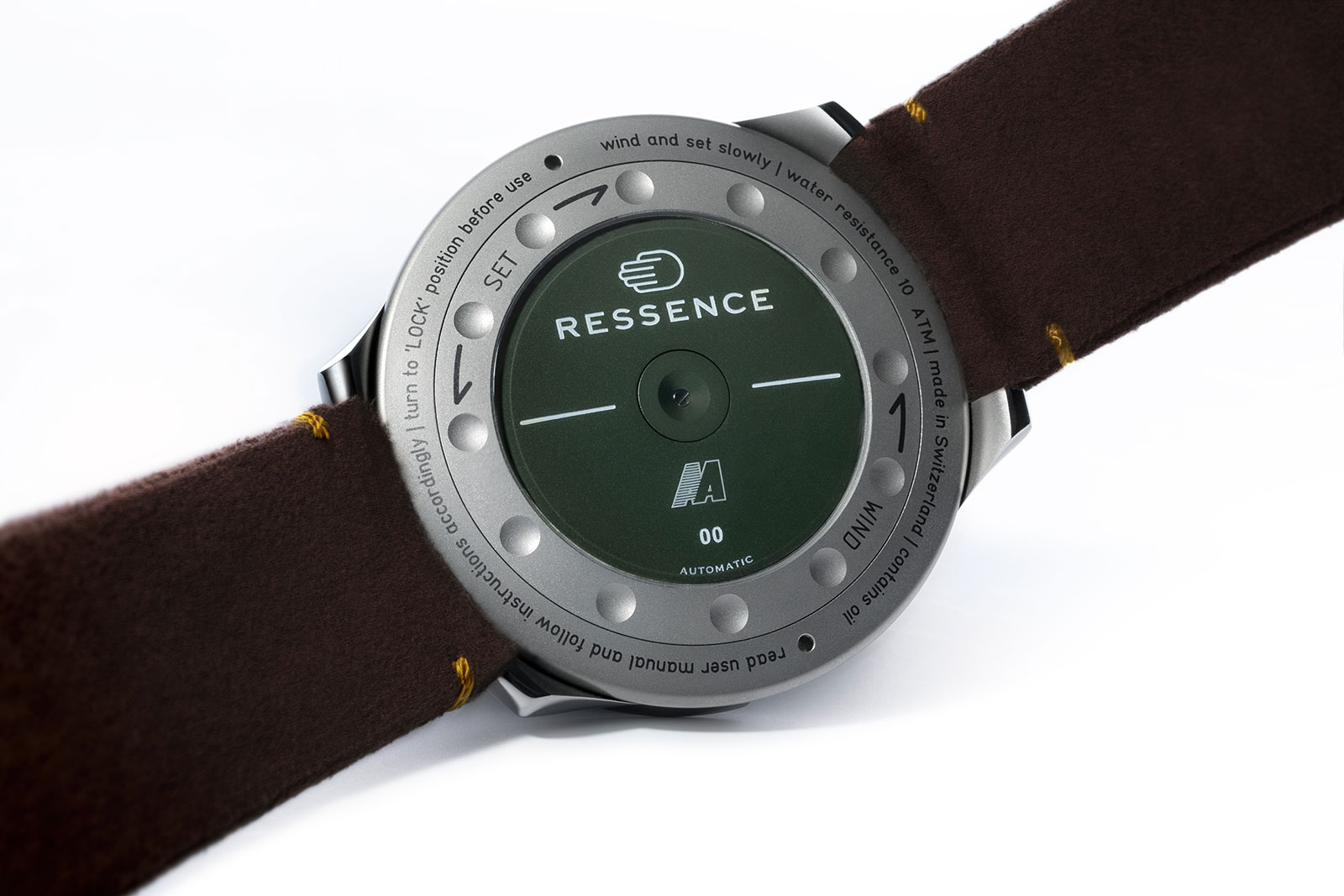 Limited edition: 40 pieces
Availability: Now, direct from Ressence or its retailers
Price: US$36,500