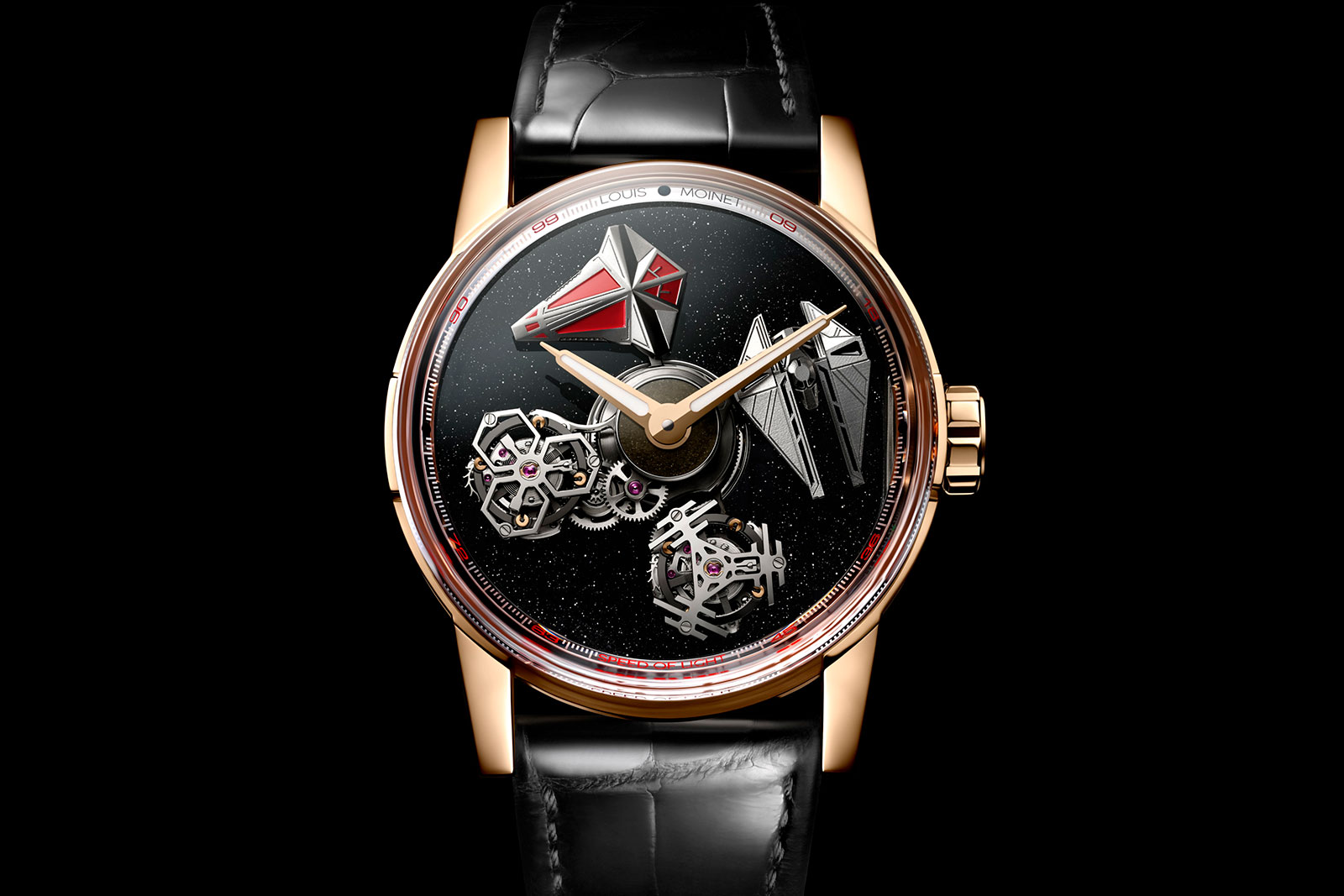 Established in 2004, Louis Moinet takes its name from a pioneering, 19th century French watchmaker. A contemporary of Abraham-Louis Breguet, Moinet remains less famous than the inventor of the tourbillon, though his recognition got a boost in 2013 when it was discovered that Moinet had invented the chronograph in 1816.

Today, the resurrected name focuses on complicated watches that usually feature novel movements and often incorporate uncommon materials. The latest from Louis Moinet – and one of its most complicated watches to date – is the Space Revolution, which is equipped with twin orbiting spaceships as well as twin flying tourbillons. 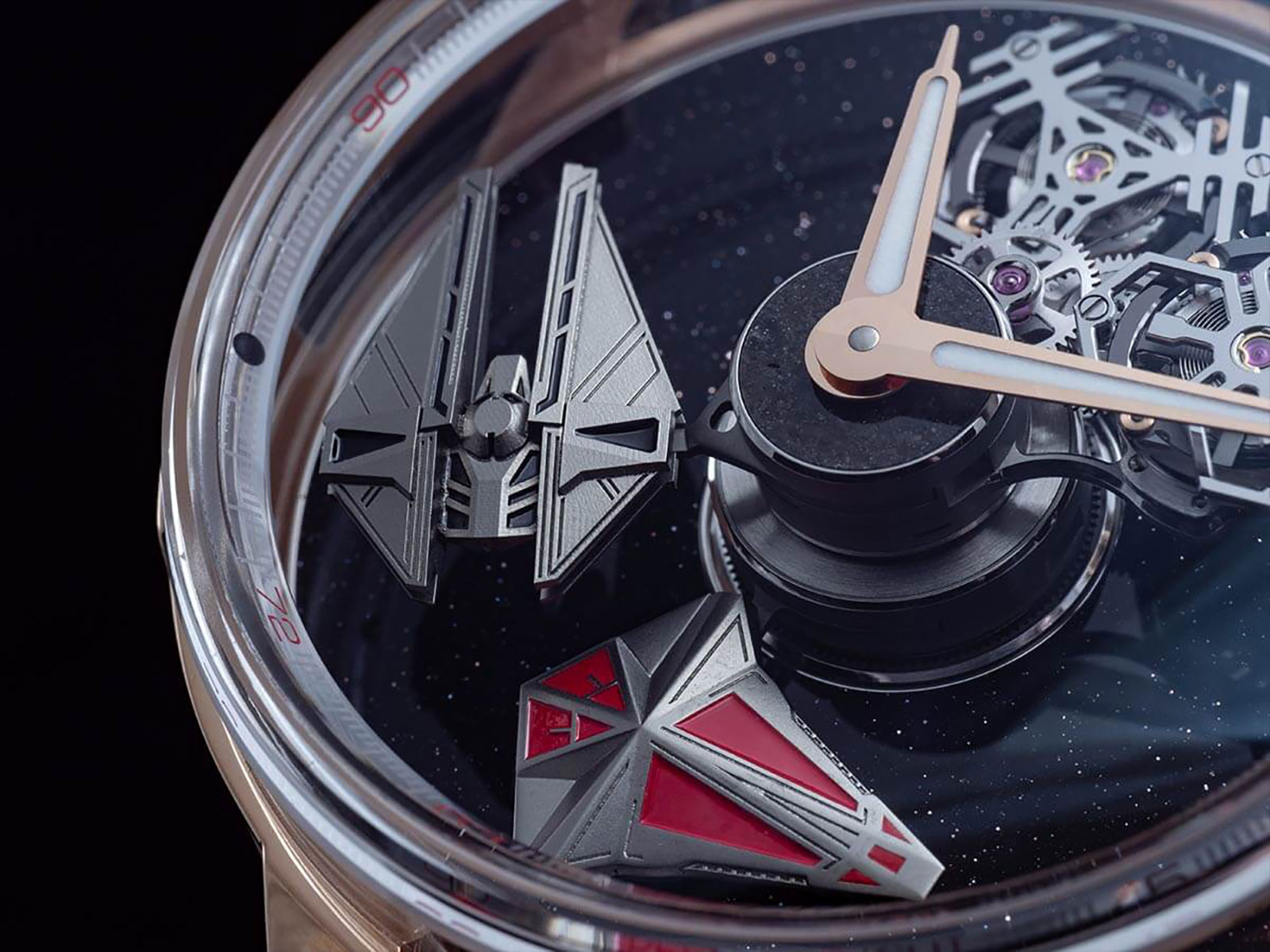 As astronomical-theme watches go, the Space Revolution is one of the easiest to understand, because it’s not an astronomical complication, but rather an astronomical theme with a generous dose of sci-fi. The twin orbital oscillators are the most impressive element of the movement. While they probably add nothing to its timekeeping, they are complicated to execute and make for quite a mechanical performance.

While the theme and technical execution are interesting – but not entirely new – the watch resembles other contemporary complications in that it is big, thick, and mechanically sci-fi in appearance. The complication and form definitely bring to mind the Jacob & Co. Astronomia, which is not a bad thing since the Astronomia is one of the defining watches in the segment of over-the-top complications with modest functionality.

In short, the Space Revolution succeeds in its narrow segment, but it isn’t especially revolutionary.

The central carousel has two arms on separate planes, with each plane containing a flying tourbillon and spacecraft. Conceived for visual effect, the mechanics are showcased under a large sapphire dome secured to a rose gold case middle. The resulting watch is extremely thick – at least 15 mm – although the exact height is not available. 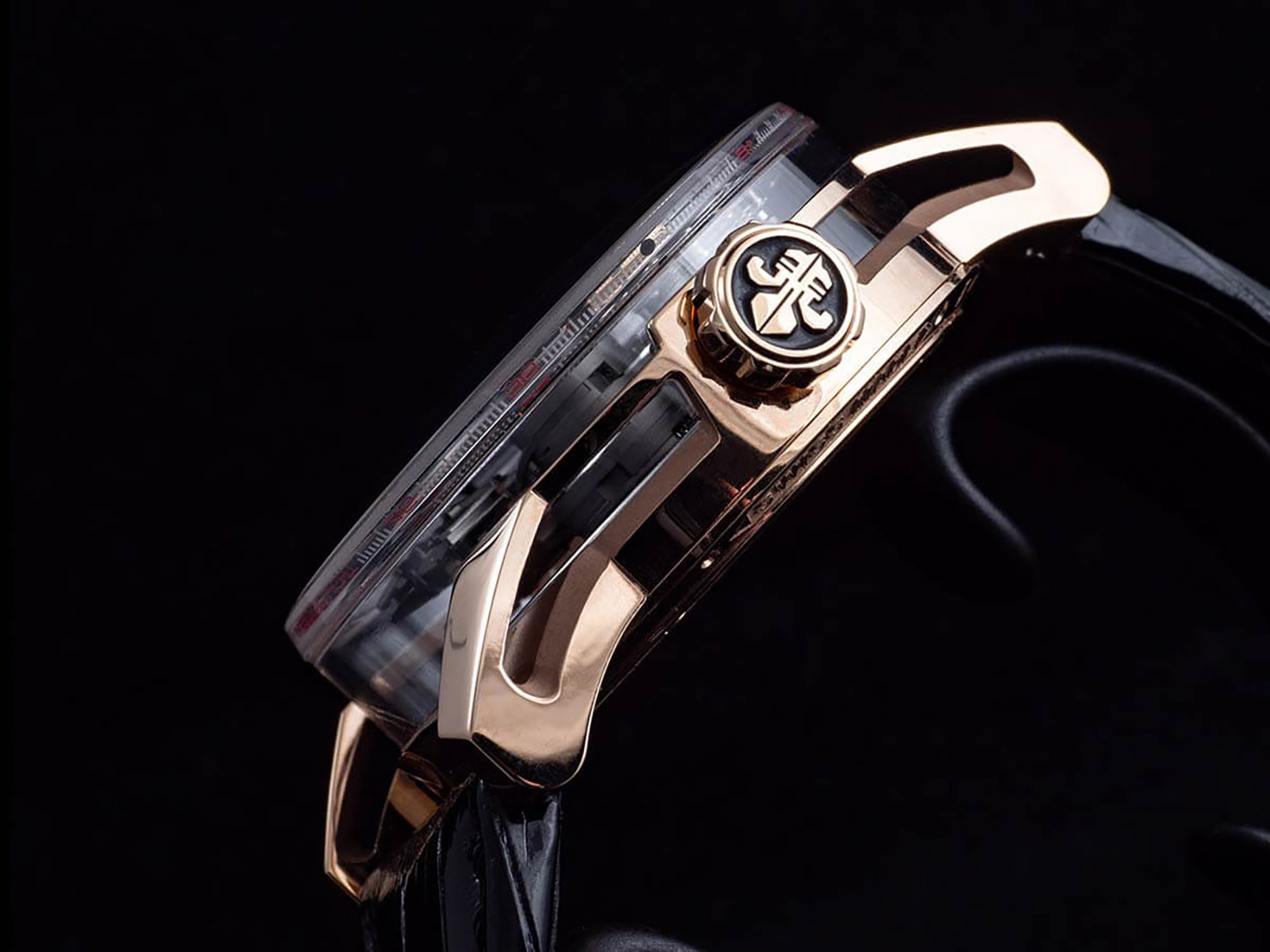 For maximum lightness, the pair of spacecraft are made of titanium, with each weighing less than 0.5 g. The two orbit in opposite directions at relatively high speeds – described by Louis Moinet as a space battle – with a period of five and ten minutes respectively.

In other words, the spacecraft complete 12 and six revolutions respectively per hour. That means they coincide 18 times an hour, passing each other as they move. Being on the opposite end of the same arm, the tourbillons rotate in an identical manner. 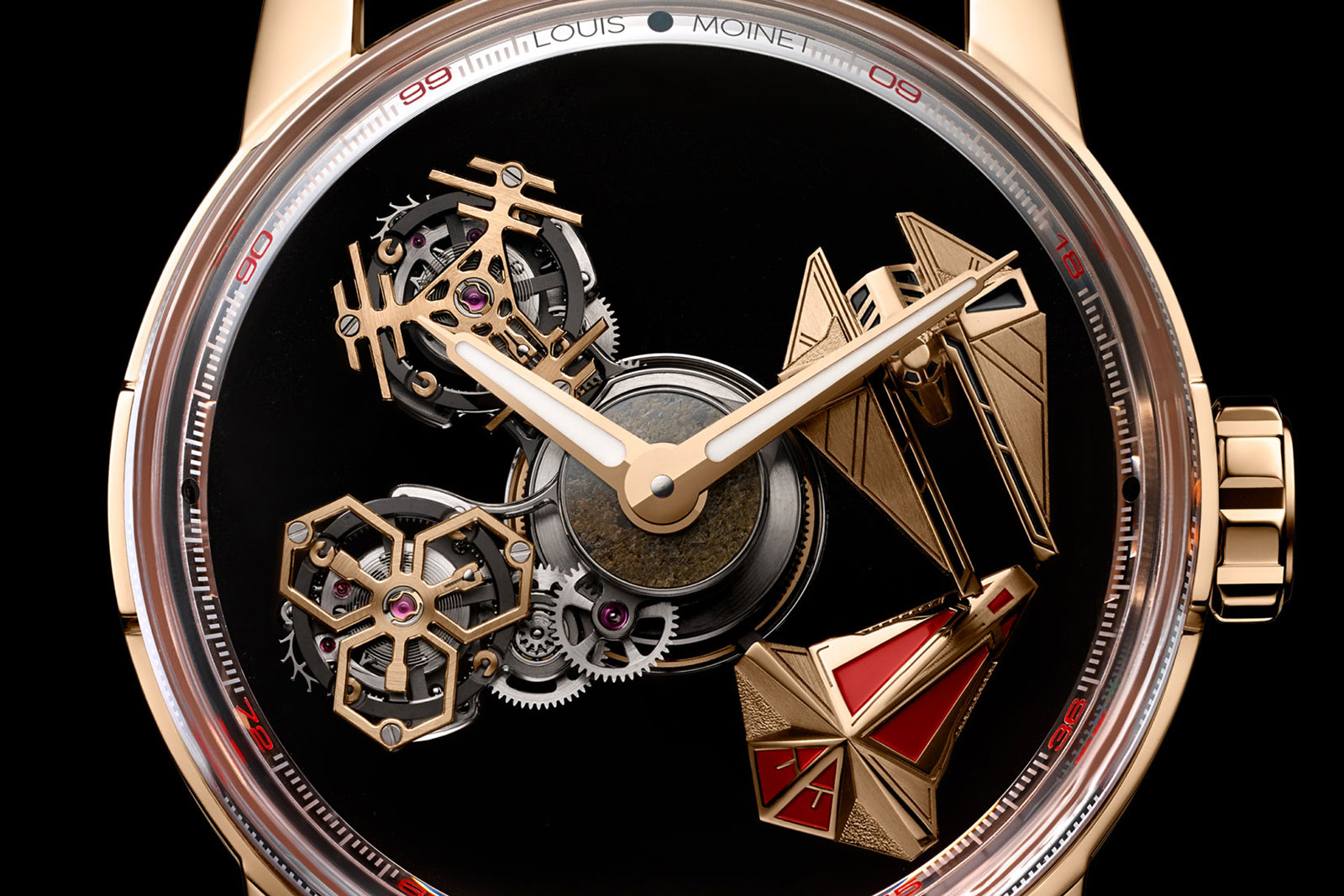 The Space Revolution is offered with two different dials, both having the same complication carousel in the centre but executed in different finishes. And both versions feature a meteorite inlay – the material used in each watch is from a different meteorite – for the top of the carousel where the hands sit.

The flat black dial – coated with the blackest-black substance for an infinitely flat, black finish that evokes the nothingness of deep space – is complemented with rose gold components, creating a warm contrast.

On the other hand, the Aventurine glass dial is a more romantic take on the galaxy, with the orbiting components in silvery colours of rhodium, titanium, or steel. 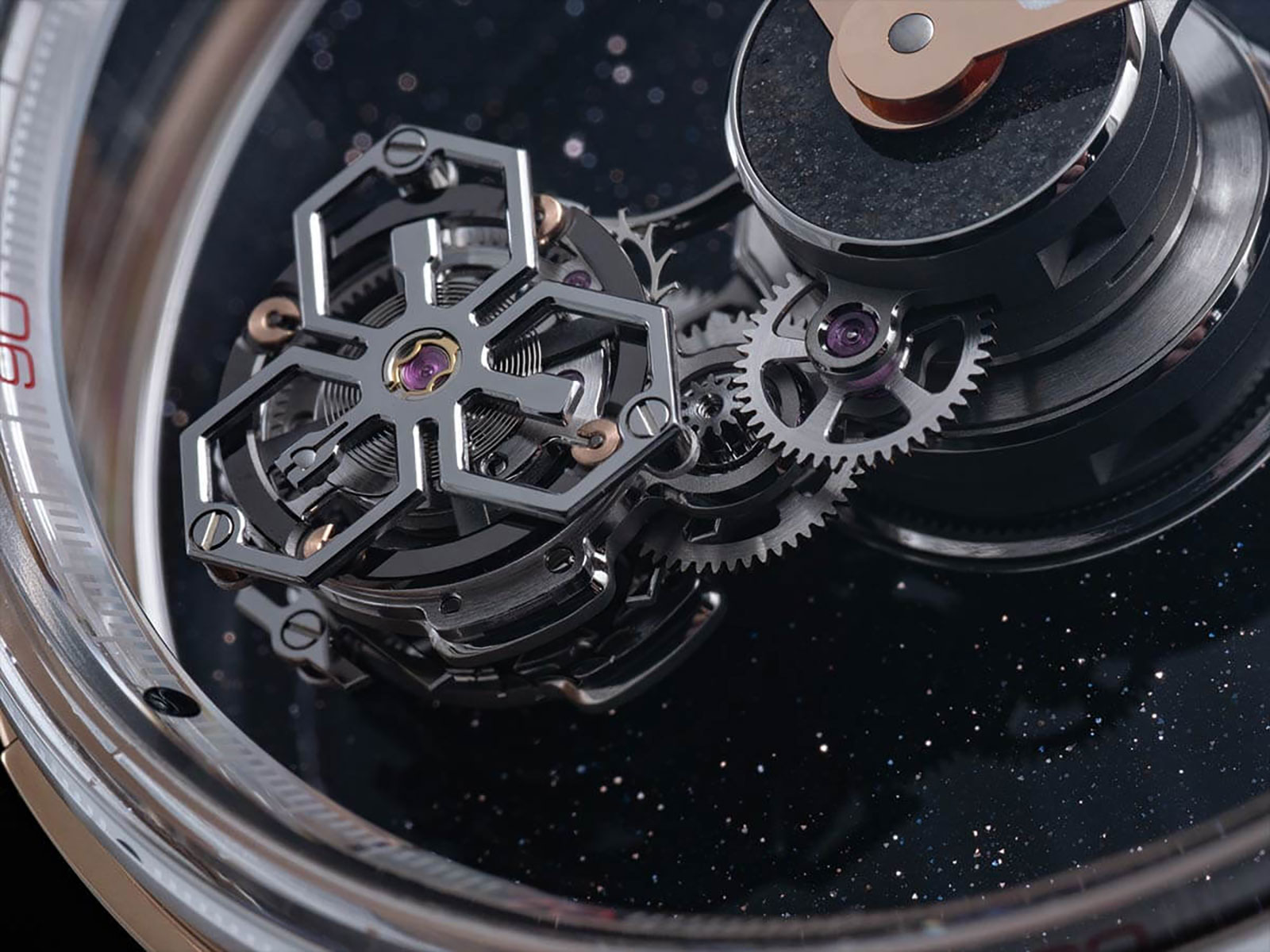 While the dial-side construction is exotic, the movement side is more traditional. It has a symmetrical layout, especially the barrel bridge, which has been open-worked to reveal the two large mainsprings.

More unusual is the function-selector slide on the back that controls the crown; sliding from one to the other switches the crown from winding mode to time setting. 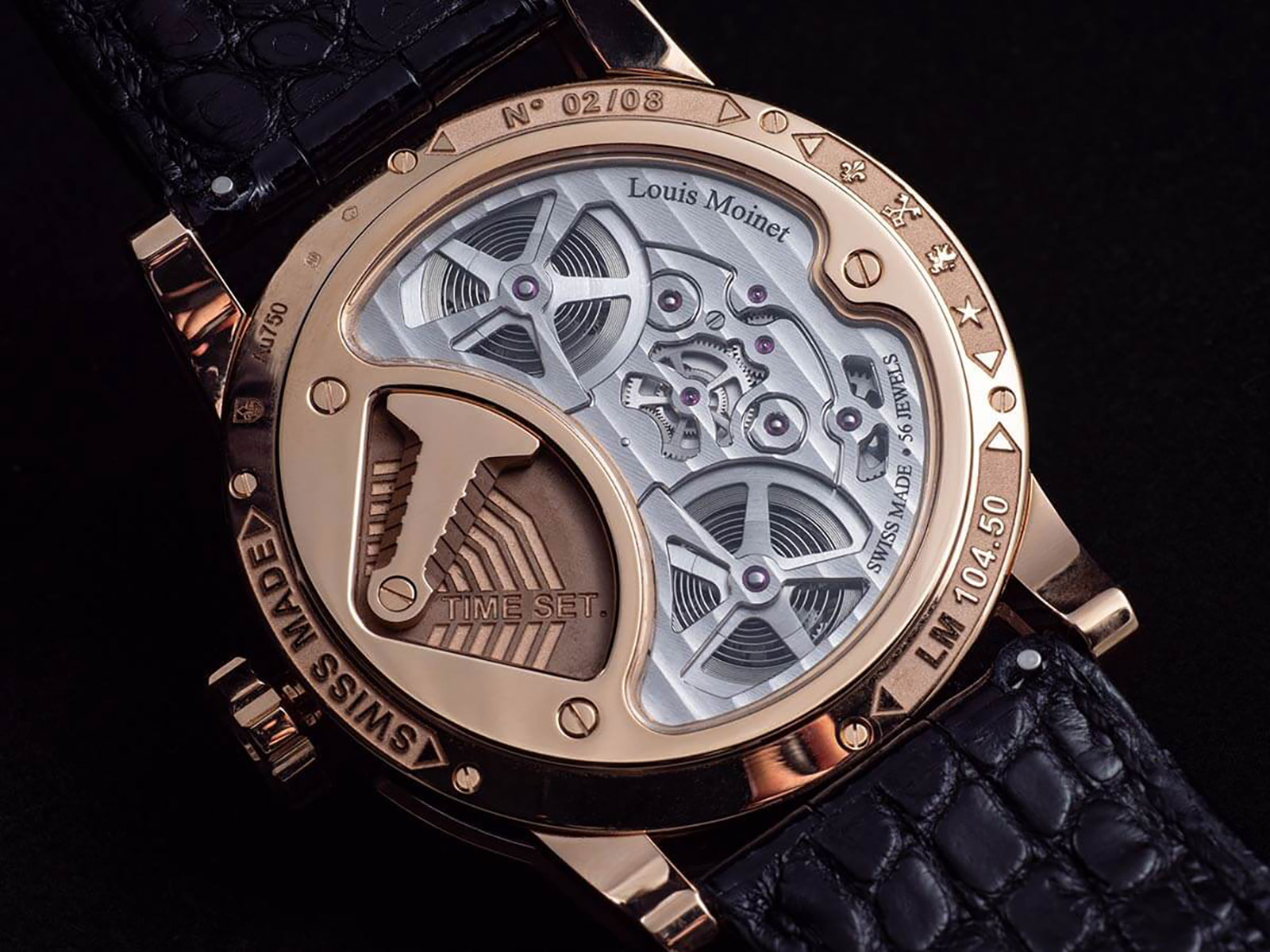 Correction October 14, 2020: The coating on the flat black dial is similar to the better known Vantablack, and not Vantablack as stated in an earlier version of the article.