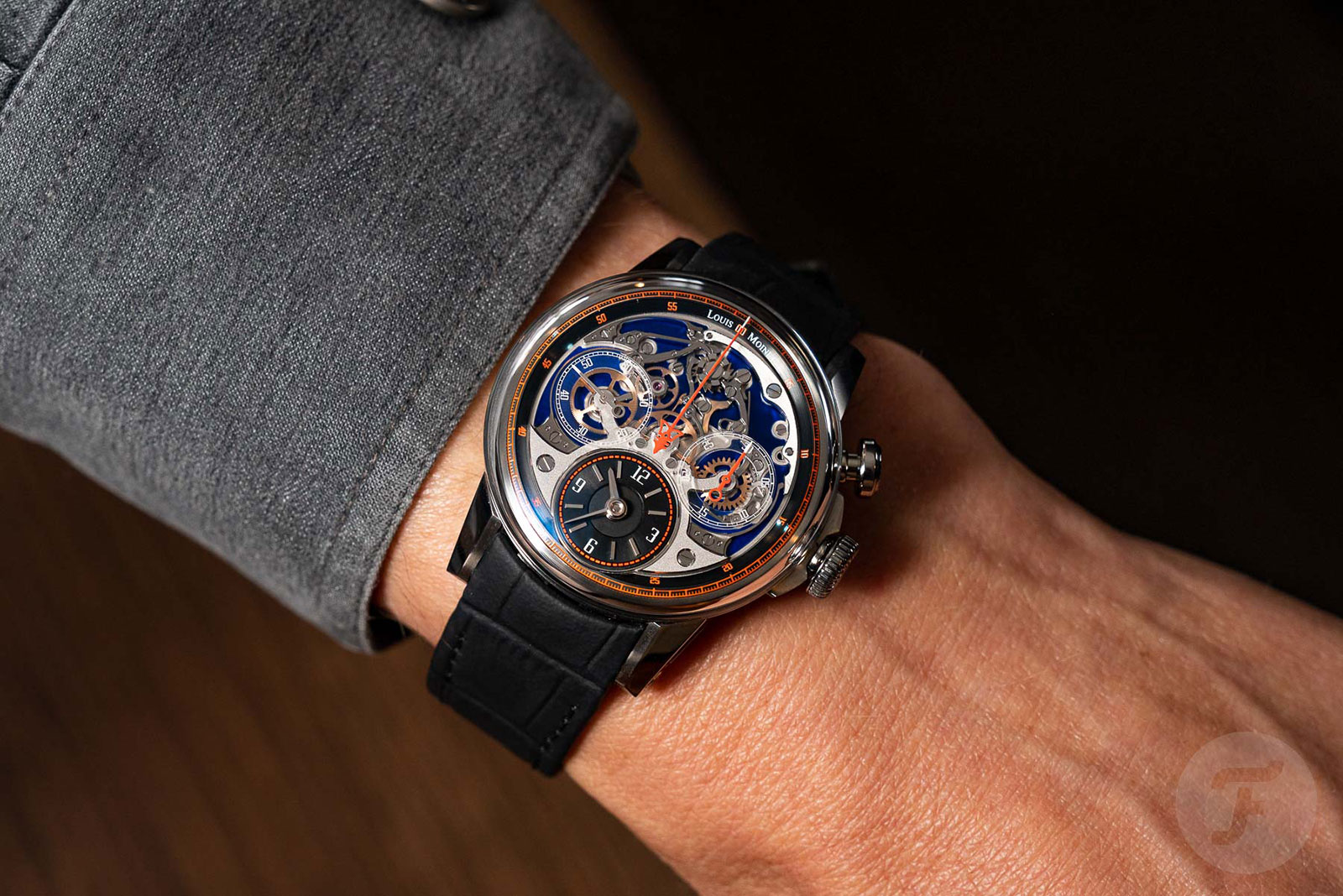 Based in the capital city of the Netherlands, Fratello Watches is a watch magazine best known for having coined the social media hashtag “Speedy Tuesday” dedicated to the Omega Moonwatch. But its latest announcement comes from the realm of independent watchmaking in the form of the Fratello x Louis Moinet Memoris Spirit 40 Chronograph Limited Edition.

A new take on Louis Moinet’s signature chronograph, the Fratello edition will be available on its website on August 16. The 25-piece limited edition employs orange accents to dress up the open-worked aesthetic of the Memoris Spirit, which has a laterally-coupled, column wheel-equipped chronograph constructed on the dial. 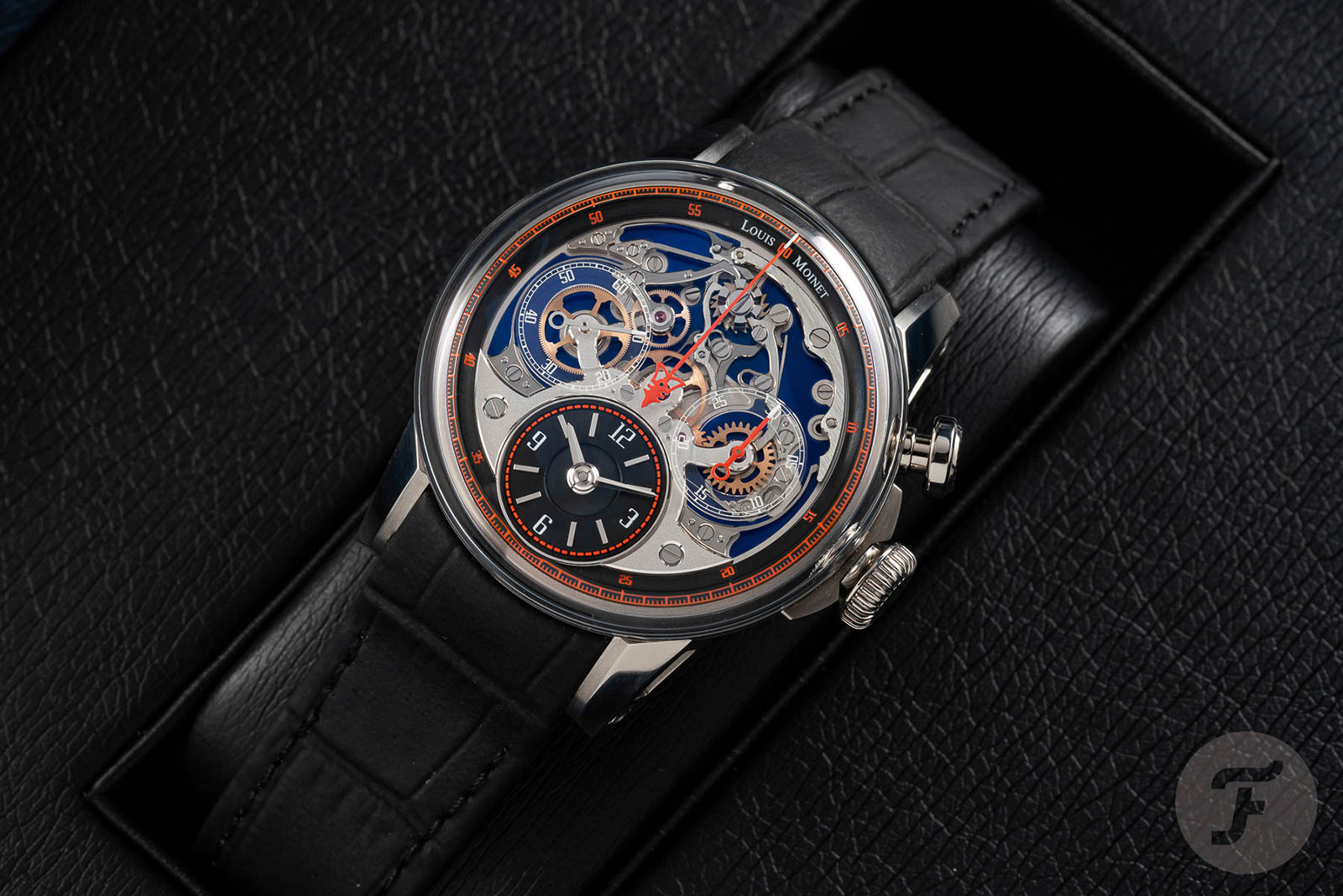 More compact than past Louis Moinet chronographs, the Memoris Spirit 40 is wearable and lightweight, although it remains a notably thick watch due to the height of the movement.

The height is justified because the watch is all about the movement, which is obviously interesting. All of the intricacies of the chronograph mechanism are exhibited on the dial, making it one of the few watches to have a traditional chronograph set-up visible on the front. However, the base movement relies on the architecture of the Valjoux 7750, which is a good thing from a reliability and functionality perspective, though one would hope for something fancier at this price point. The styling of the watch is simpler than the average Louis Moinet, but still elaborately conceived. The lugs, for instance, are open-worked and feature proprietary screw heads for the strap bars. The downside of the brand’s style is the generous branding, with its logo found on the dial, case side, case back, and movement. 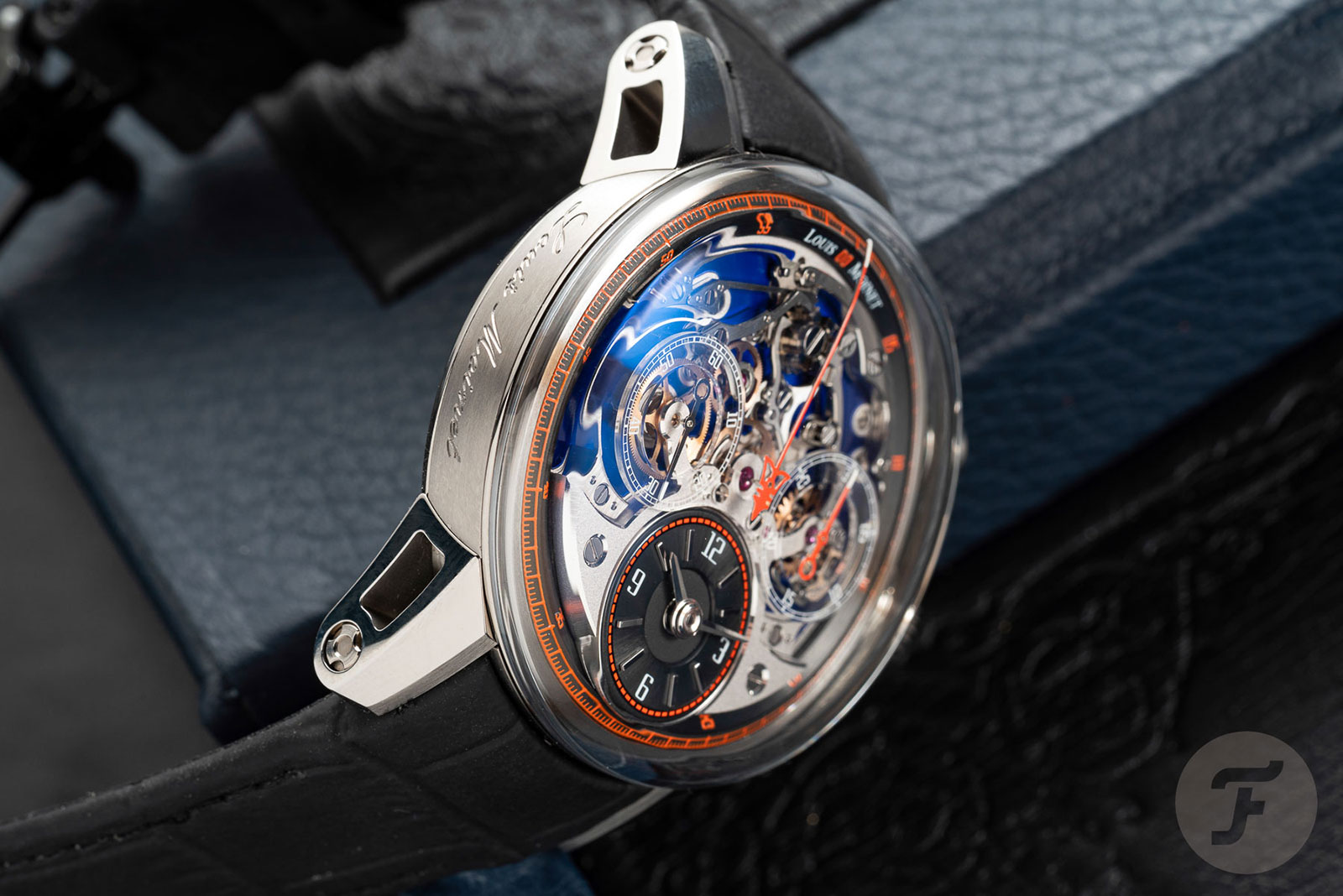 With a retail price of about US$30,000, the Memoris Spirit 40 sits in-between the extremes of the chronograph market. It is an unusual offering, so it does quite well thanks to its intrinsic features, but also because competition is scarce in that price segment.

However, it is a niche offering because competition is stronger in the segments above and below. For a smaller budget you have the likes of Habring2, while lavish spenders can go for the Lange Datograph.

At 40.7 mm in diameter, the Memoris Spirit 40 is fairly compact compared to Louis Moinet’s past chronographs, although it remains thick at just under 16 mm high, due in part to the domed crystal. But because the movement is large and the case titanium, it will be light on the first.

The Fratello edition is distinguished from the standard models in both colour and details. The most apparent addition is the generous use of “luminous orange”, known by its colour code RAL 2005, which is found on the dial and hands as well as the rotor. More subtle details unique to this edition include “00” instead of “60” on the seconds scale around the dial, which was done for symmetry and also as a reference to Louis Moinet’s claim to be the inventor of the chronograph. 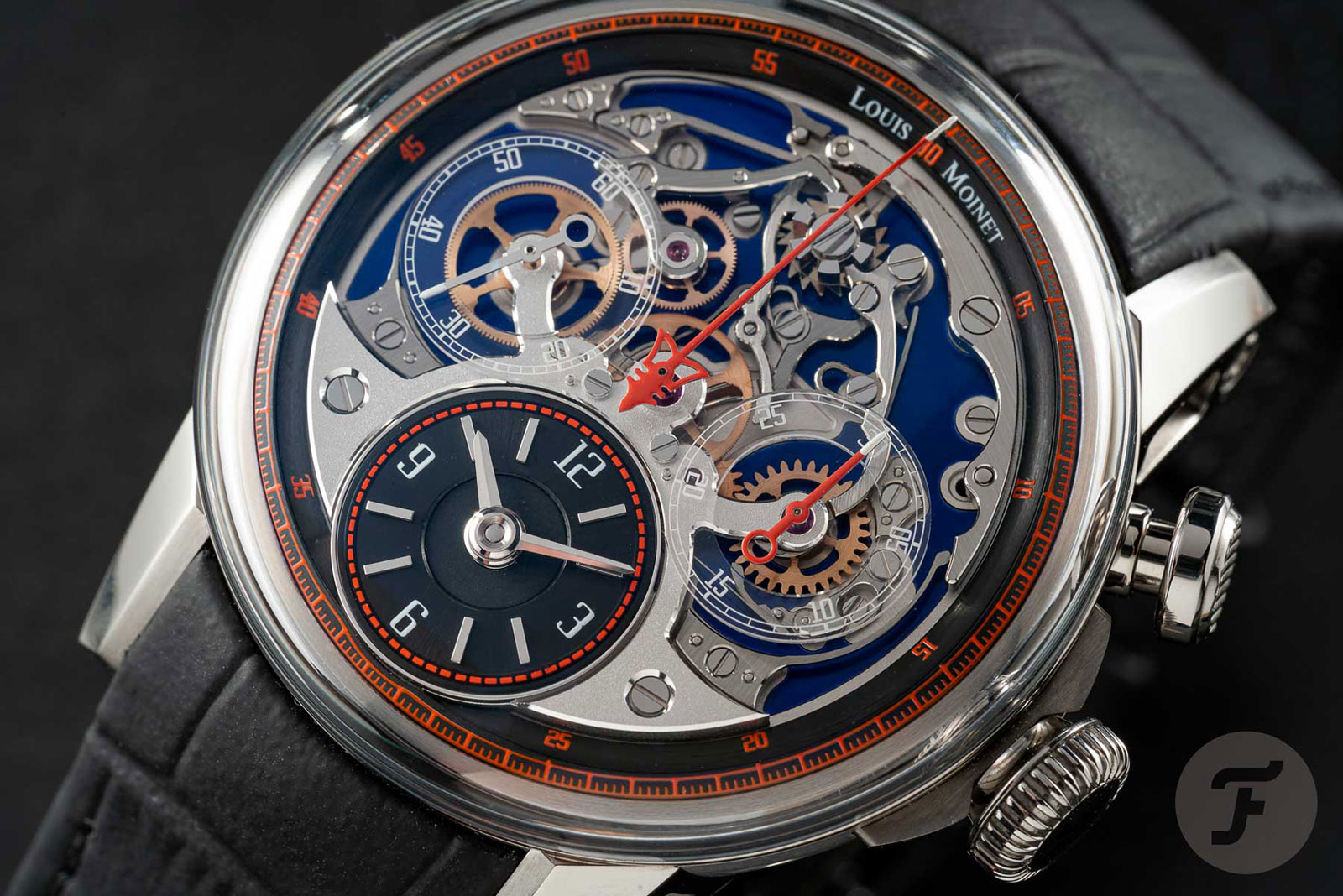 While all the chronograph hands are orange, the hands for the time have a silvered finish Like many of Louis Moinet’s other movements, the LM84 inside the Memoris Spirit was developed by Concepto, the movement specialist that supplies a diverse range of brands, including Bell & Ross and Breitling. A good portion of Concepto’s movement catalogue is based on the architecture of the Valjoux 7750, including the LM84.

It’s essentially a 7750 with the original chronograph mechanism removed, transforming it into time-only movement with the subsidiary seconds at nine (which is a hallmark of the 7750). The time-only movements are the Concepto cals. 2250 and 2950. 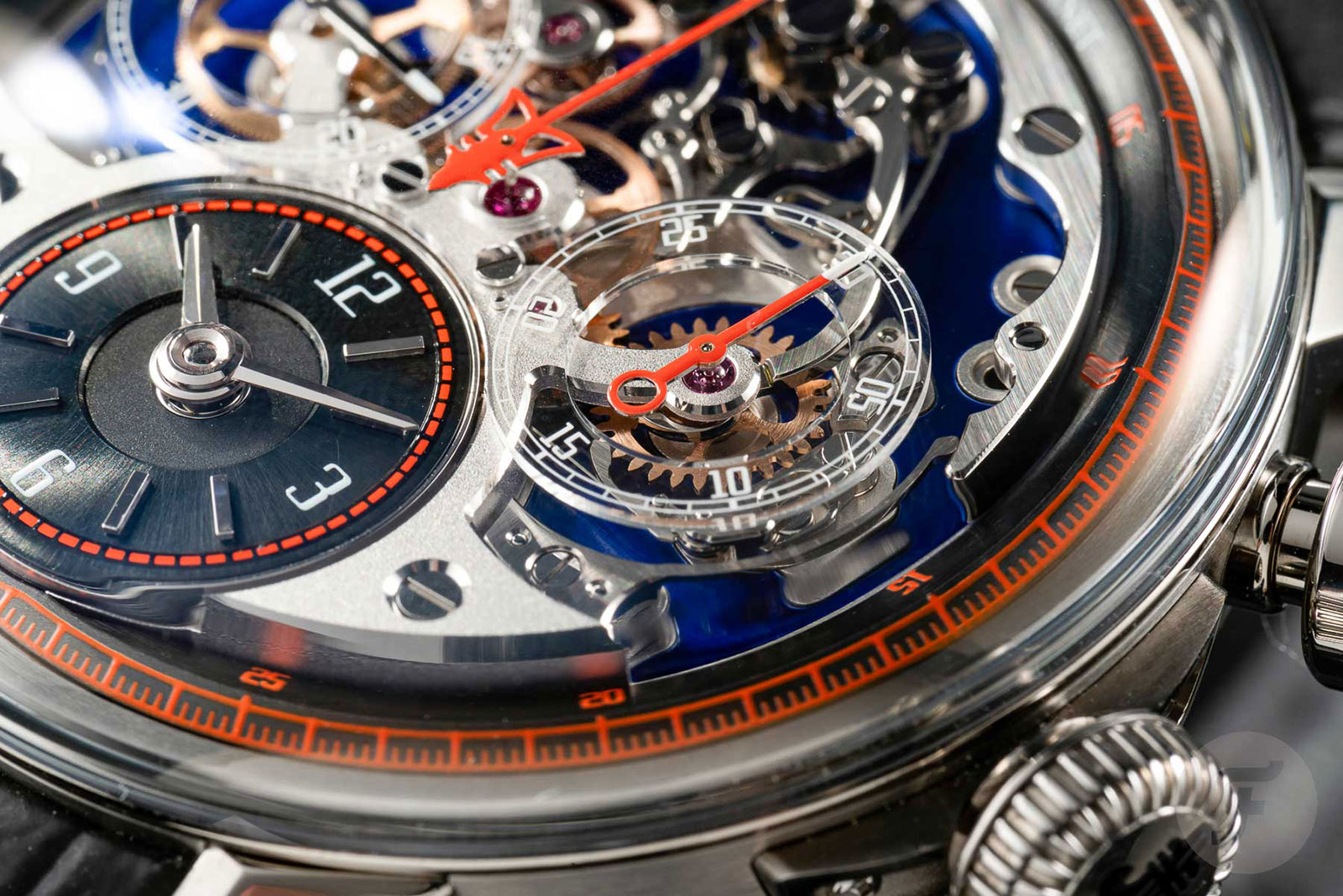 A pair of clear sapphire rings form the registers at three and nine o’clock, while the time is indicated in a sub-dial at six