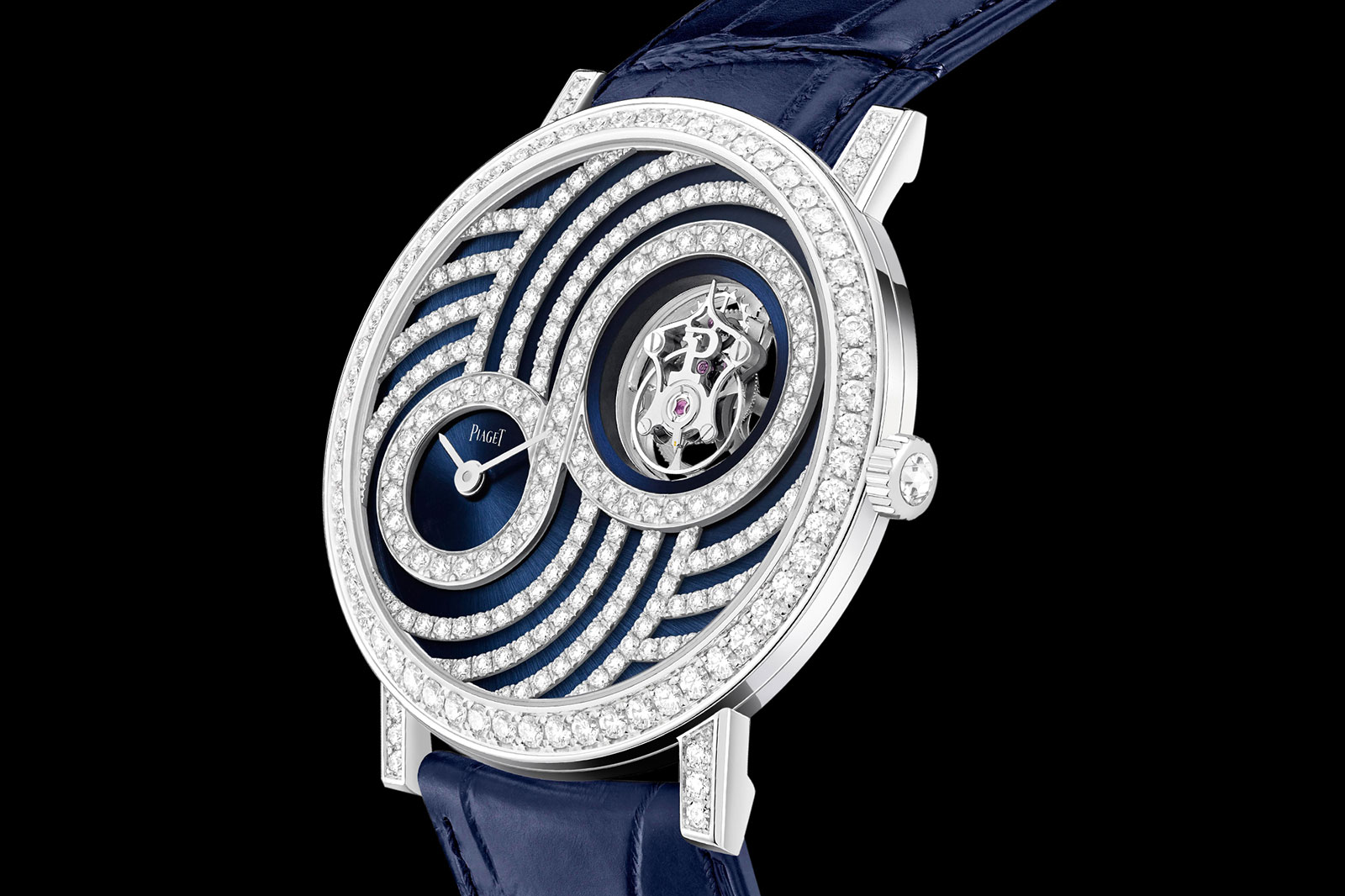 To commemorate the 60th anniversary of its first extra-thin wristwatch that was launched in 1957, Piaget launched a series of anniversary watches in 2017, including the flagship Altiplano Tourbillon High Jewelry watch, powered by the cal. 670P caliber that’s a mere 4.6mm tall. 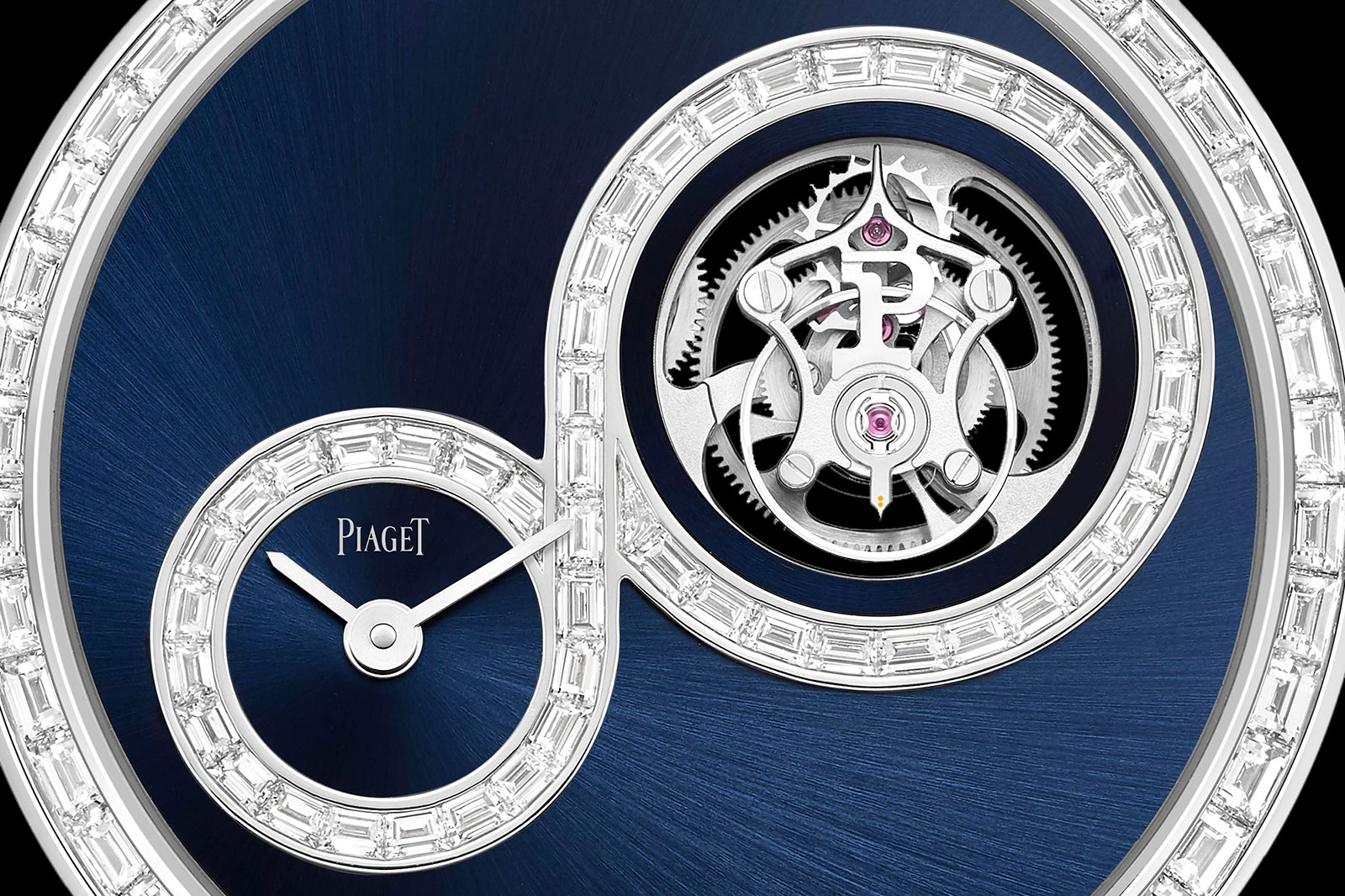 The race to produce the thinnest wristwatch ever reached its zenith in the 1970s and 1980s, after which tastes shifted in the new century towards ever-larger watches, particularly with the rise of luxury-sports watches. But some watchmakers, notably Bulgari and Piaget, have continued to slim their watches. In that context, the Tourbillon Infinite Blue does not do anything revolutionary, but take takes a tried-and-true formula and elaborates on it with a high level of execution. 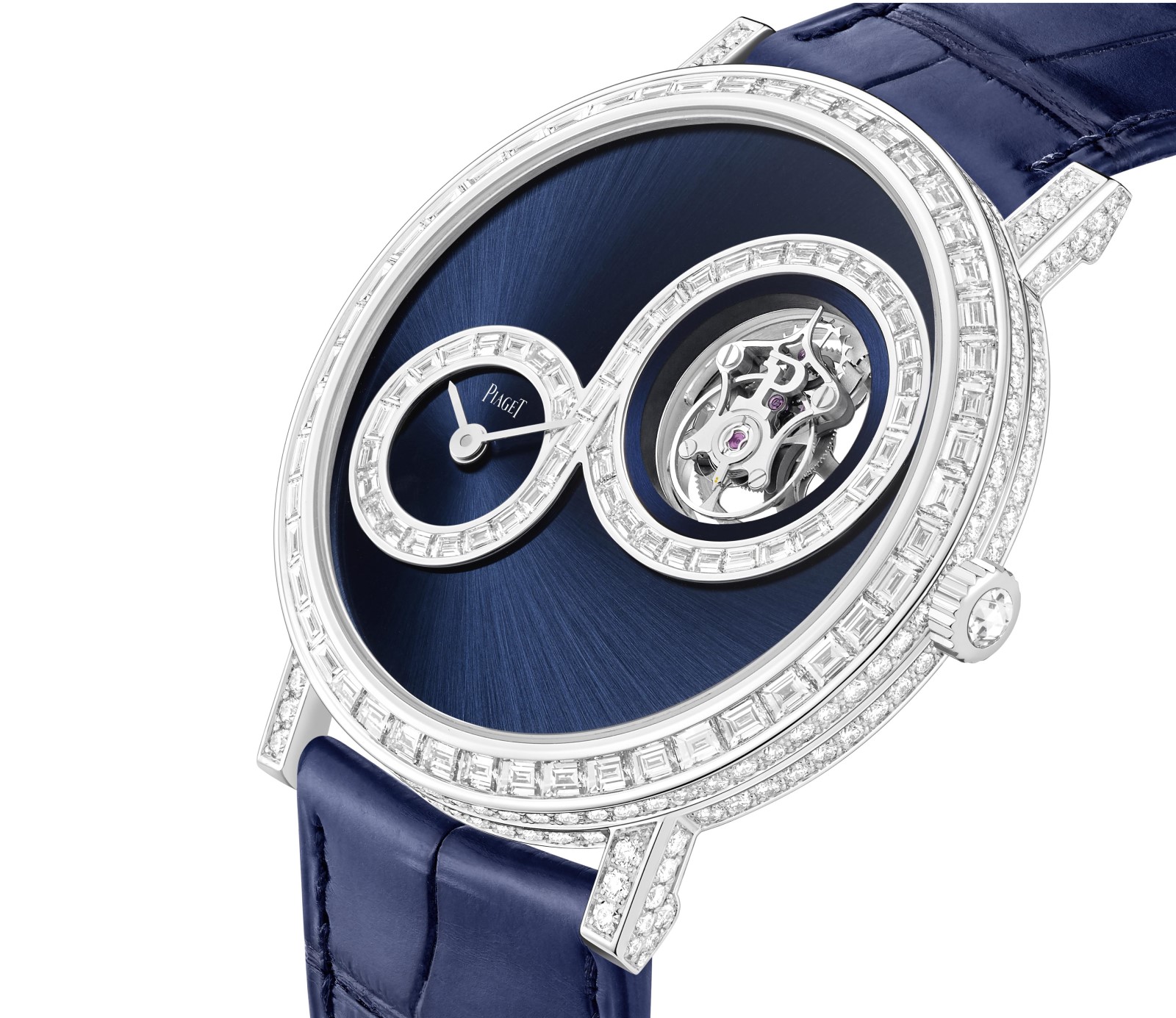 Like many other modern-day extra-thin watches, the largish diameter of 41 mm is necessitated by the movement’s architecture, which sees the components are spread out, instead of stacked up as in a conventional movement. The size and thinness of the bezel means that the watch will feel larger than it is, perhaps a shade too large for a formal dress watch.

Then again, with the extravagant diamond setting lavished on the new models, it is clear that these are watches are meant to be seen. Though the look is not for everyone – and they are prohibitively expensive for most – the new watches smartly utilise the off-centre dial layout of the Altiplano Tourbillon and elevate it into high art.

All three references have different diamond settings but share the same specs: a 41 mm case in 18k white gold that measures 7.05 mm high. The form is classic Altiplano, which means it has a high-polish finish, straight, sharply-faceted lugs, and a gently sloped bezel. And it has a display back that reveals the cal. 670P, a manual-winding movement with a power reserve of 48 hours.

The dial is a metallic navy blue with a sunburst finish that radiates out from the cannon pinion. And the flying tourbillon at two o’clock is done in the traditional Piaget style, with the cage incorporating the Piaget logo. 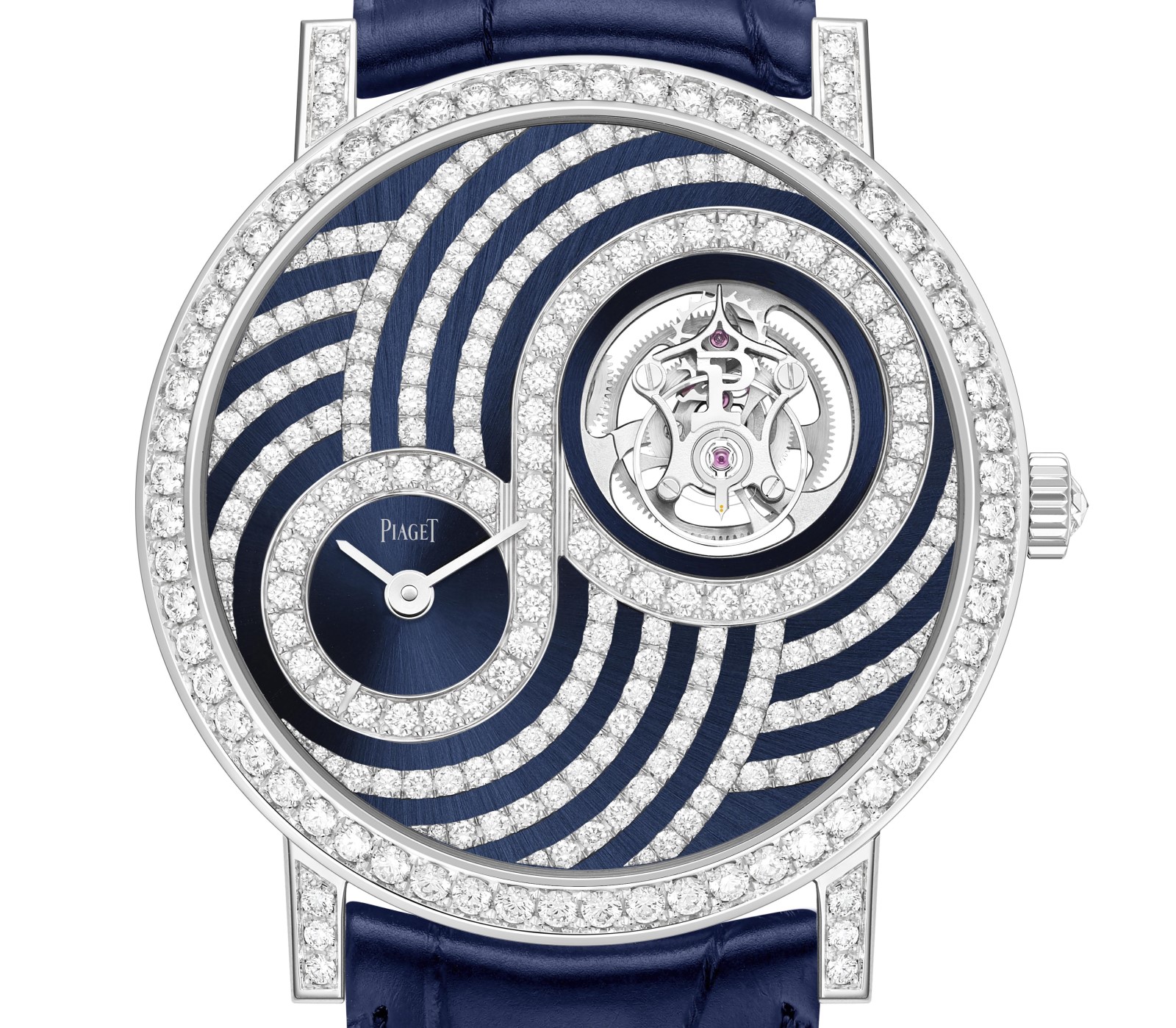 Encircling the two elements is a white gold frame resembling a figure-of-eight that’s set with brilliant-or baguette-cut diamonds. To match the gem-set case and dial, the straps are fitted to an 18k white gold folding clasp that is also set with 24 brilliant-cut diamonds weighing 0.05 carats.

The priciest of the trio, the second model (G0A45044) is limited to eight pieces, and the only one set with baguette-cut diamonds. Both the infinity motif on the dial and the bezel are decorated with 48 baguette diamonds, which have been affixed with invisible settings. Additionally, the caseback, case band, and lugs are decorated with 265 brilliant-cut diamonds for a total gem weight of 6.03 carats.

The final model (G0A45045) is limited to 18 pieces. In addition to having a brilliant-cut diamond-set bezel, the lugs are also diamond set. The dial takes the figure-of-eight motif and transforms it into a radiating wave composed of 179 diamonds. In total, the G0A45045 is set with 3.39 carats of diamonds. 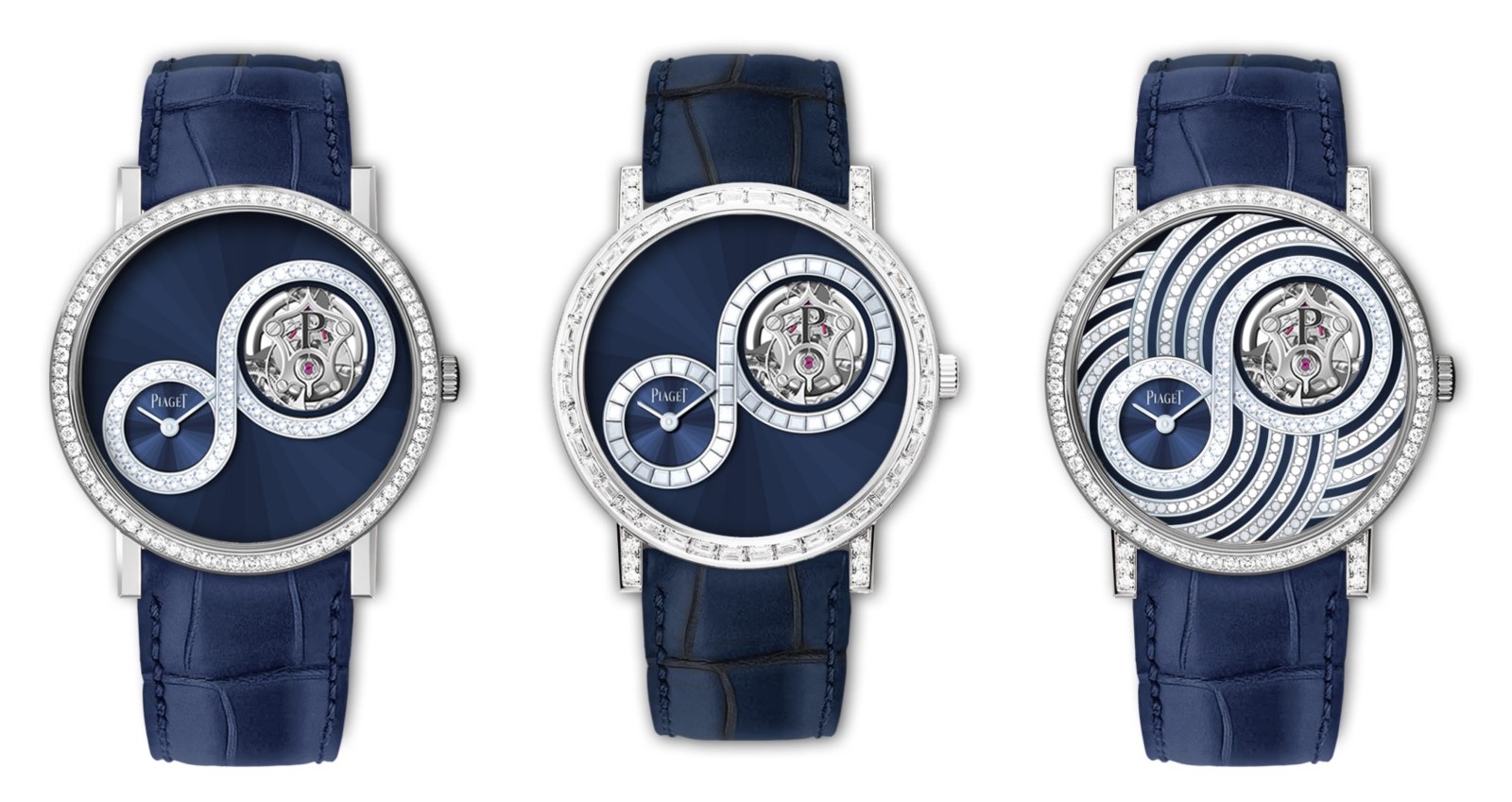