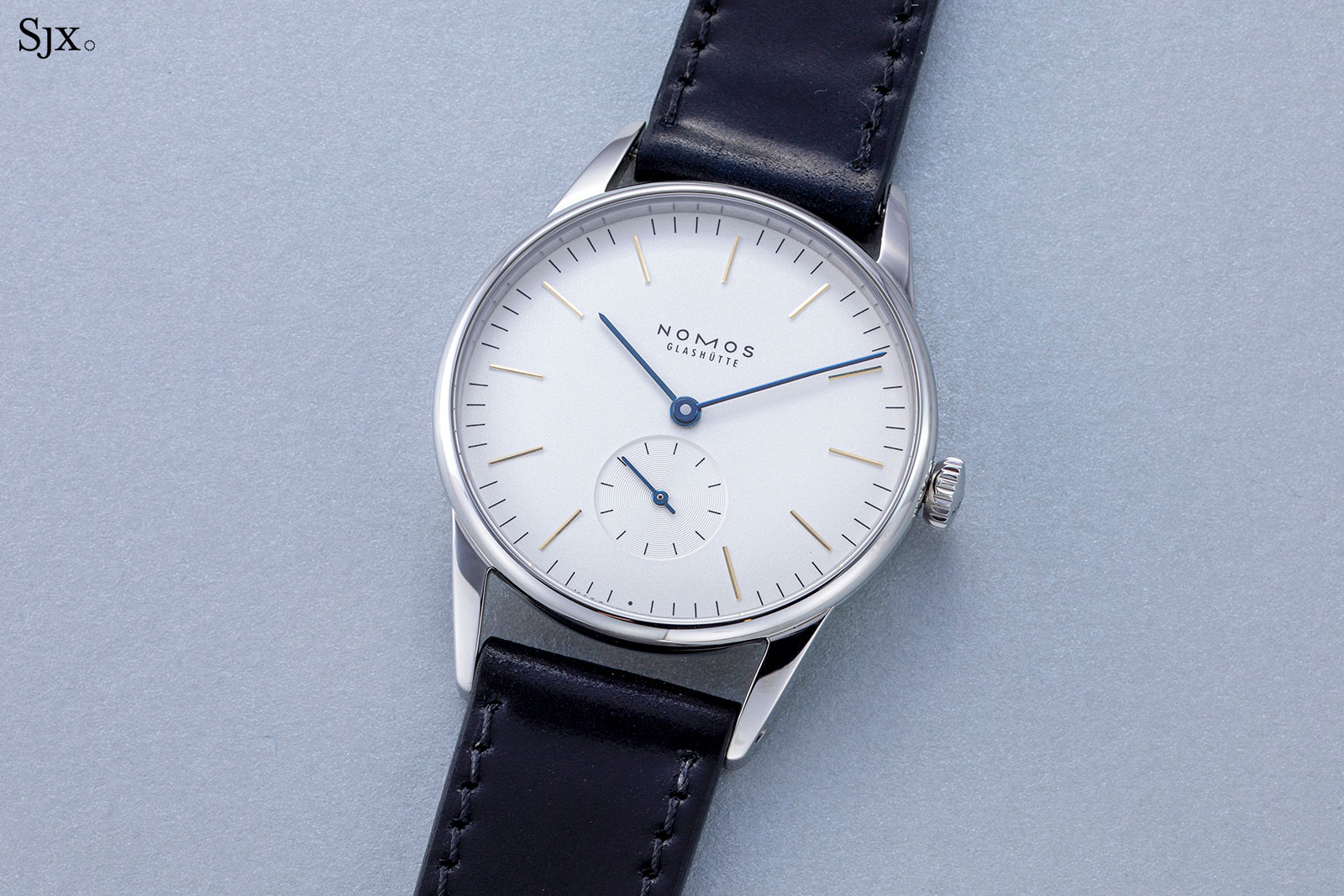 Deciding on an entry-level watch is exciting, but also confusing, especially for a first-time buyer. It’s often a problem of too many choices.

Competition is strong in the segment, with the usual suspects like Seiko and Nomos, but also newly-established “micro brands” all competing in the same space. One of the standouts in terms of value, however, is the Nomos Orion, which combines aesthetics and functionality in a clean, approachable package.

The simplicity of its design means the Orion has aged surprisingly well.

It doesn’t look it, but the Orion is almost 30 years old – Nomos introduced the model in 1992, two years after the brand was established. The Orion still looks modern today – evidence of its durable design. 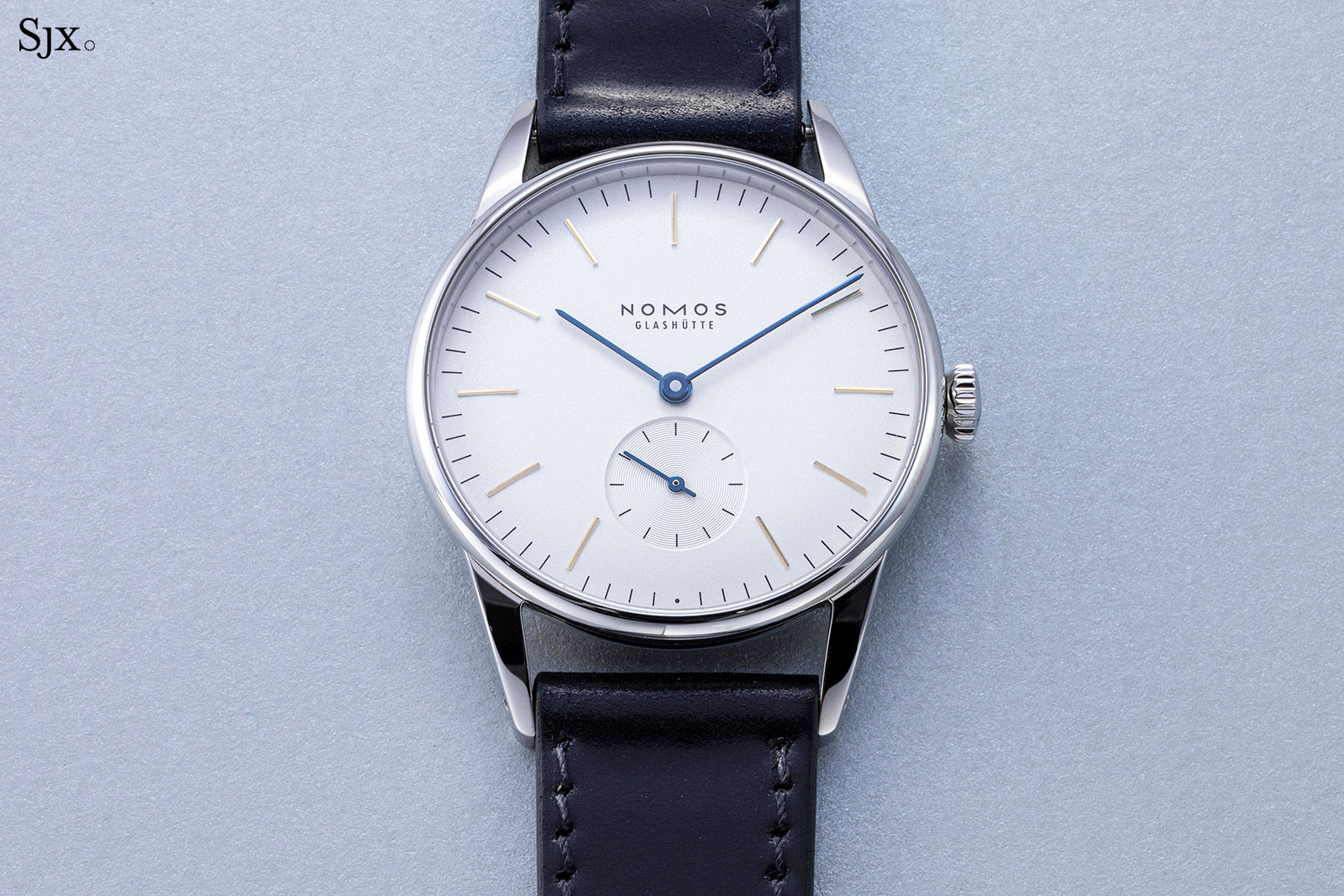 The Orion is refreshing in its simplicity, instant legibility, and charming typography, all accented by subtle but quirky details like the minute track. The success of the design can be attributed to its philosophical inspiration, Deutscher Werkbund.

Although Nomos watches are often described as being Bauhaus-inspired, they are actually designed according to the philosophy of the Deutscher Werkbund. A community founded in 1907, Deutscher Werkbund’s goal was to revolutionise industry and manufacturing in Germany by elevating the artistic and practical elements in products to make the easier to mass produce.

Strongly influential in early 20th century industrial design, the movement later gave birth to Bauhaus, the better-known school of design founded by Deutscher Werkbund members. Amongst the most prominent examples of Deutscher Werkbund-inspired corporate cultures in the modern day is Muji, the Japanese purveyor of all manner of products that are all united by good, clean design. 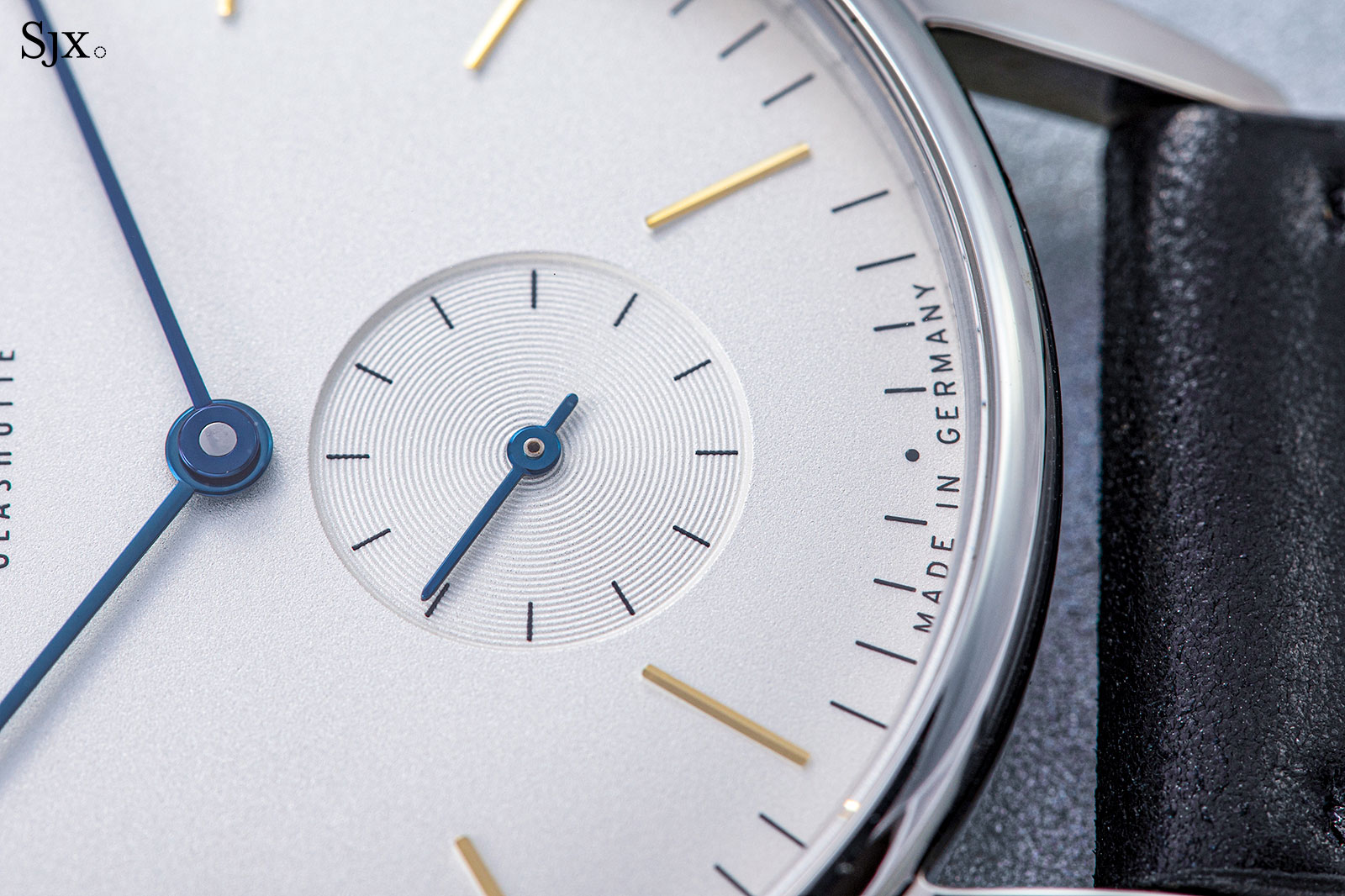 The watch is instantly legible thanks to the clean, high-contrast dial with hands of perfect length. In addition, the slightly domed glass is distortion-free even at an angle.

Arguably the most interesting detail on the dial are the applied hour markers and printed minute track; the markers do not extend to the periphery of the printed track as is convention. This eccentricity creates a tiny degree of visual tension, giving the watch a discreetly quirky feel that is rare in simple, formal designs. 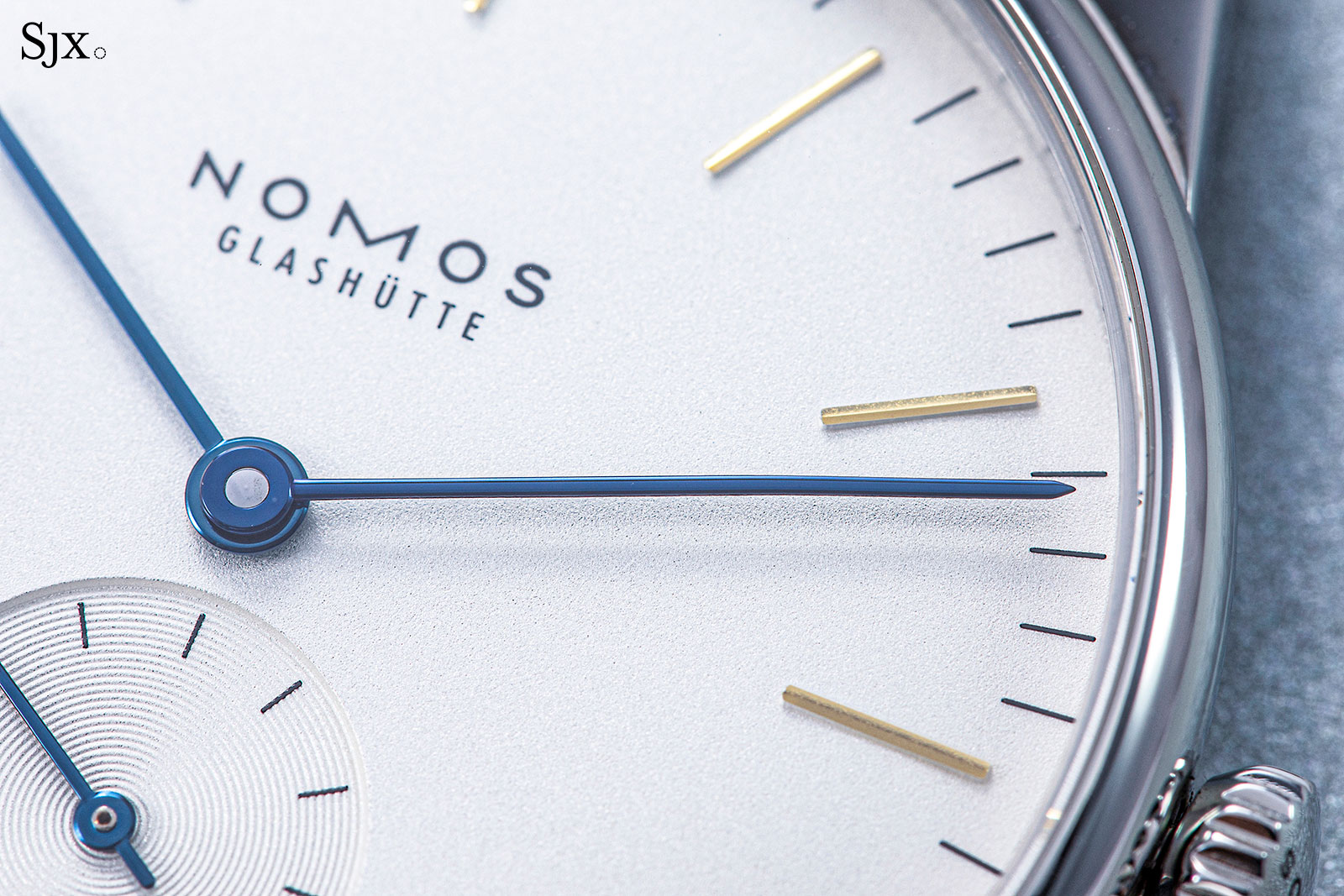 The construction of dial is unfussy, but care has be paid to the details, which create a sense of depth in the dial. For instance, instead of the stamped, flat hands found in most watches, the hands on the Orion have a domed profile from end to end.

Additionally, the raised, applied indices and sunken small seconds also increase the dimensionality. Furthermore, the circular guilloche (also known azurage) on the sub-dial adds flair to the streamlined aesthetics. The rippled finish on the sub-dial gives it a slight shimmer when it catches the light. 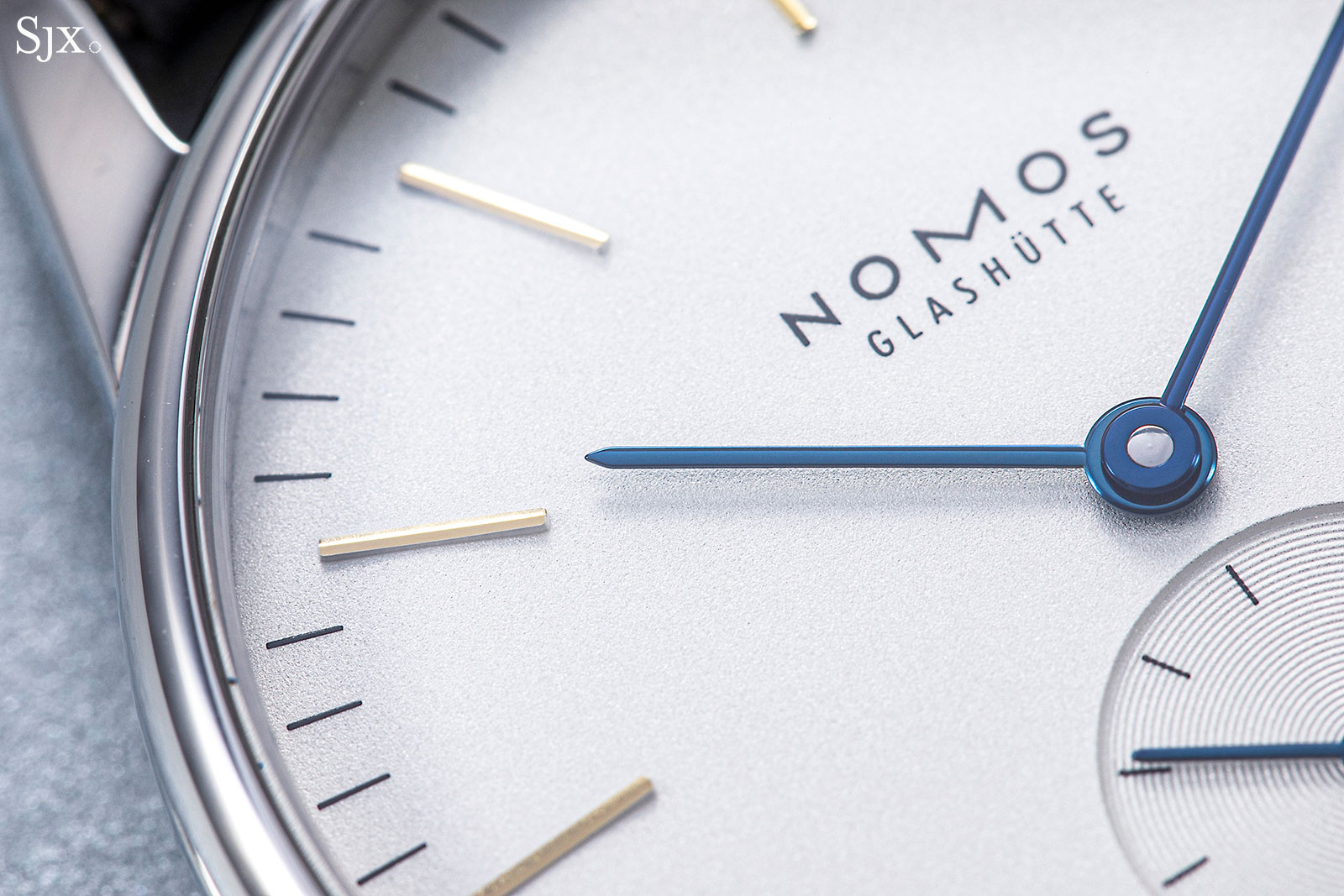 A domed profile for the blued-steel hands 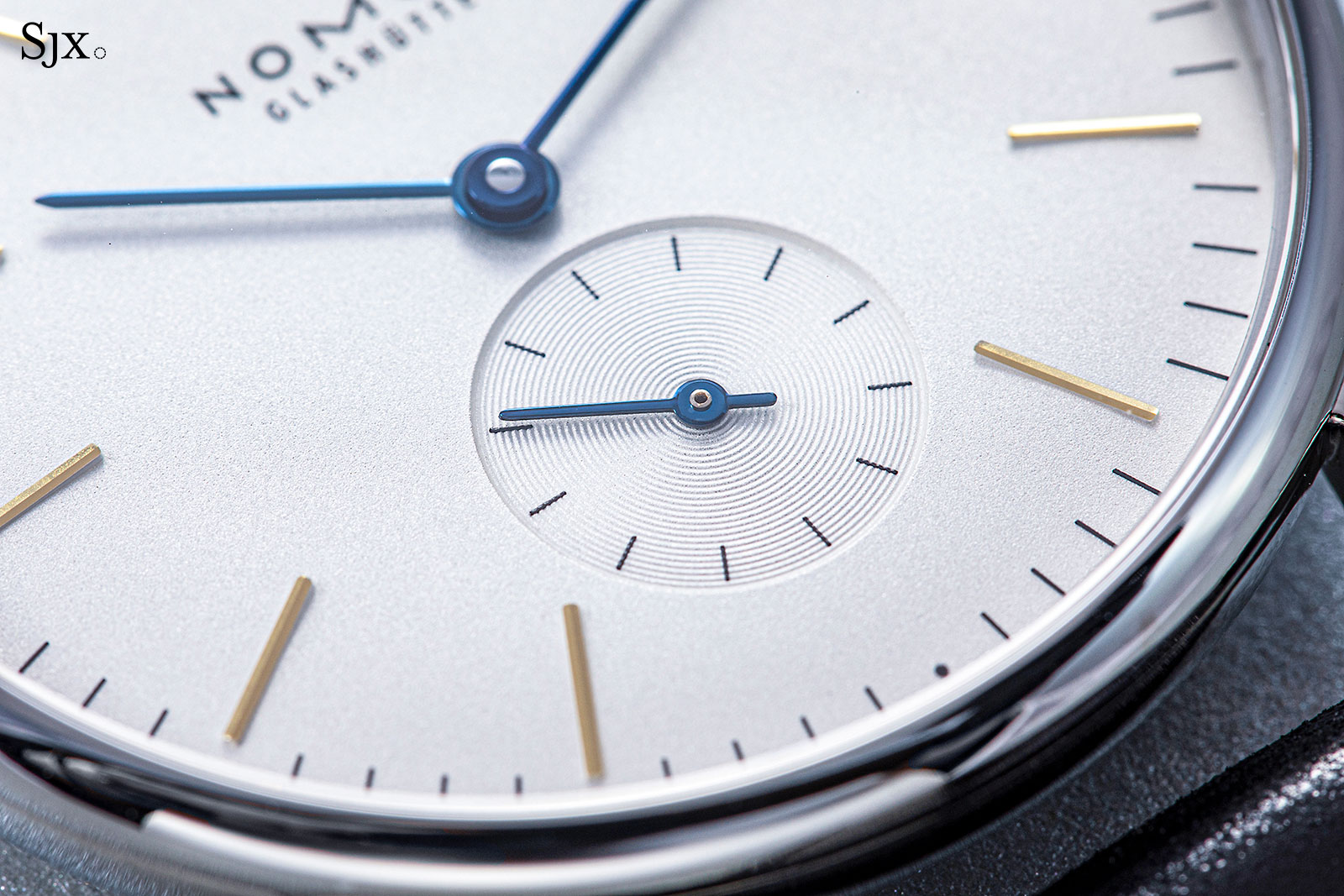 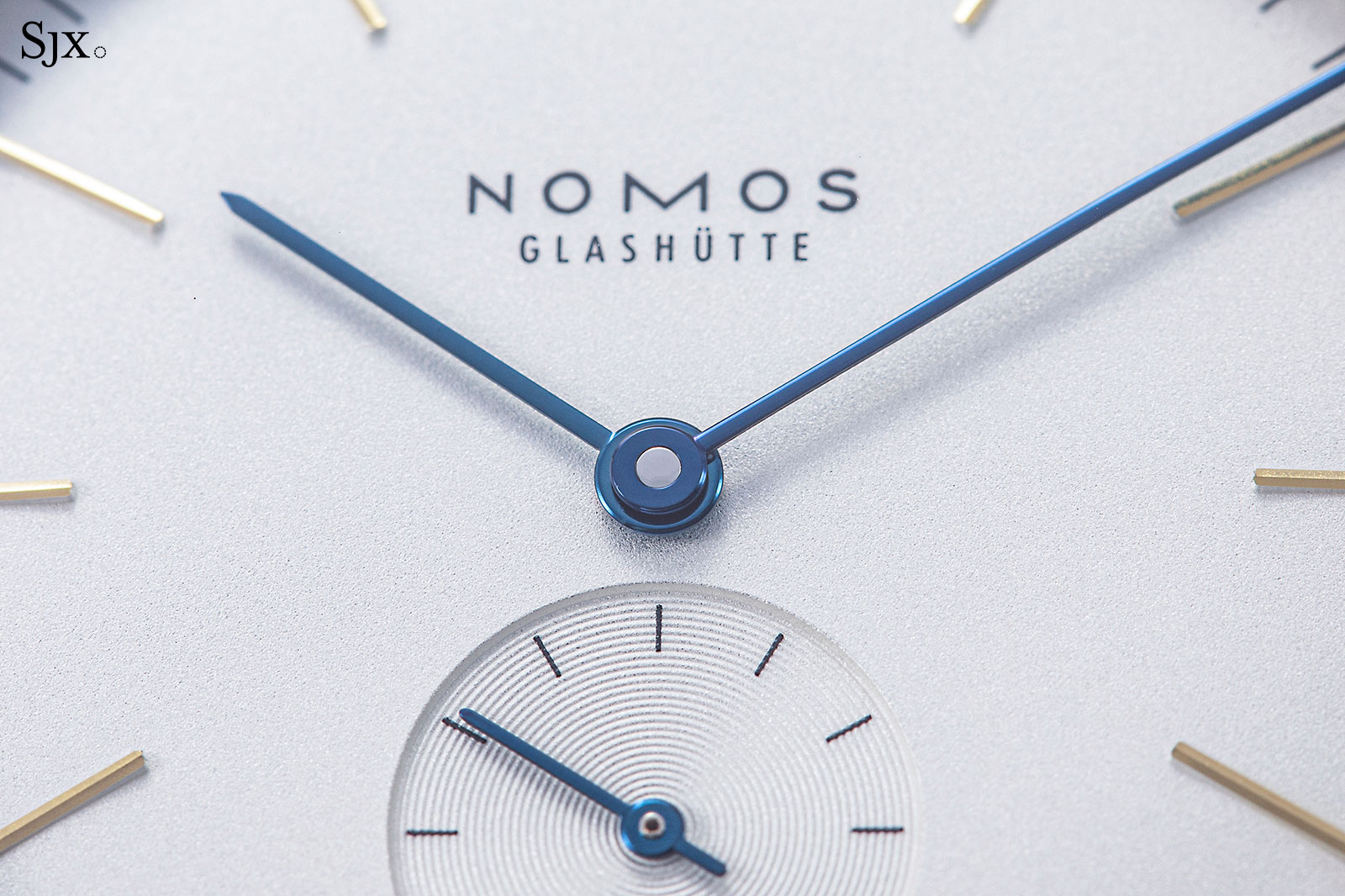 The centres of the hands are neatly polished 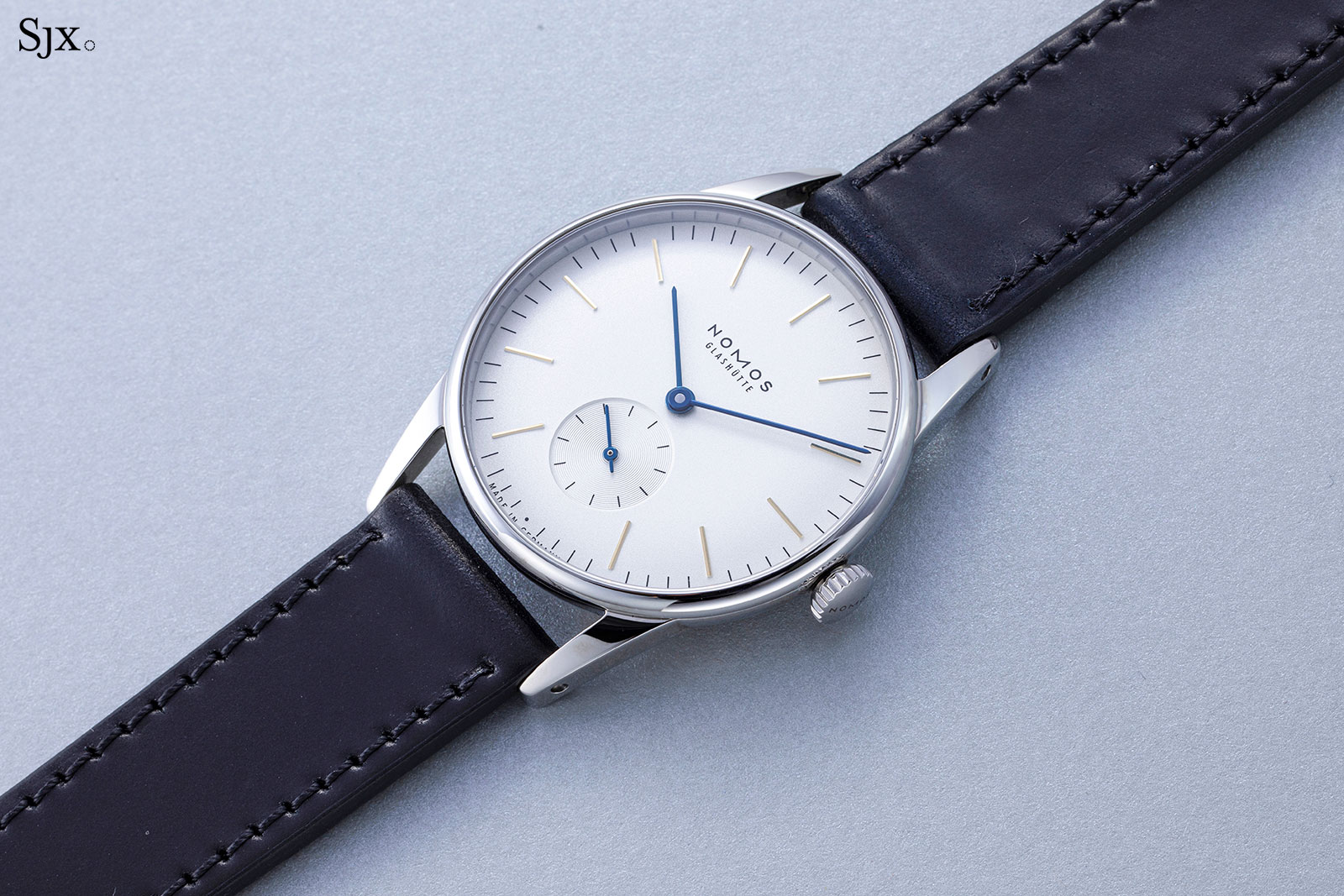 The 35 mm case is great in size and proportion. It appears slightly larger than the measurement suggests, because the light-coloured dial and thin bezel create an optical illusion of greater size.

It wears comfortable and lightweight on the standard leather strap (there’s no bracelet available from Nomos, though aftermarket options are many). Because of its thinness and sloped case flanks, the Orion sits thin on the wrist. The case has drilled lugs for easy strap changes 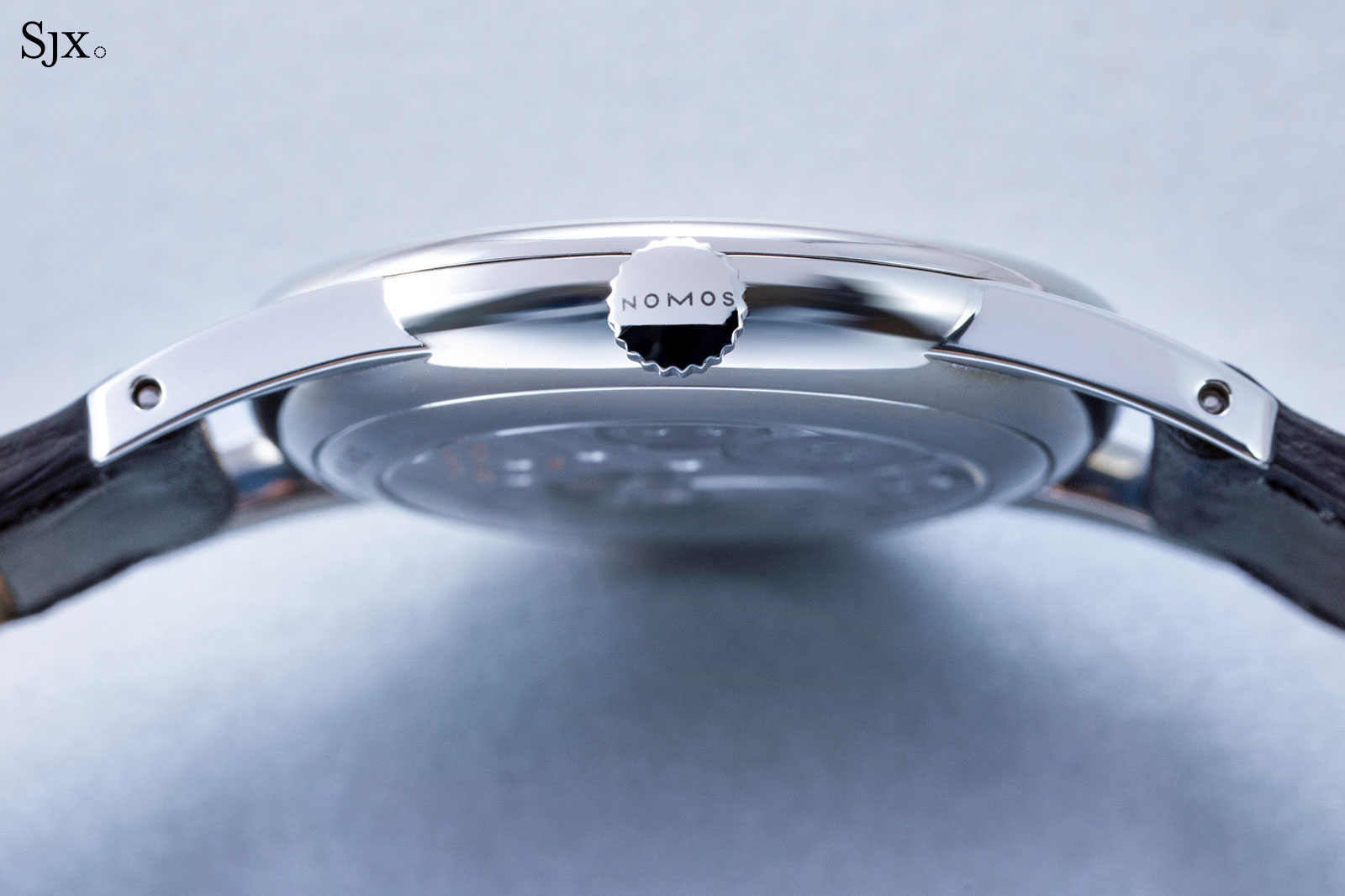 The case middle slopes inwards towards the back

And typical of Nomos case designs, the lugs are strikingly long. Fortunately, the lugs are narrow and vanish when seen from a distance. Because the Orion is a smallish watch, the long lugs mean a tip-to-tip length of 44.4 mm, which is still manageable for most wrists. On the largest-size, 38 mm Orion, the long lugs might not fit well on smaller wrists. On a female wrist 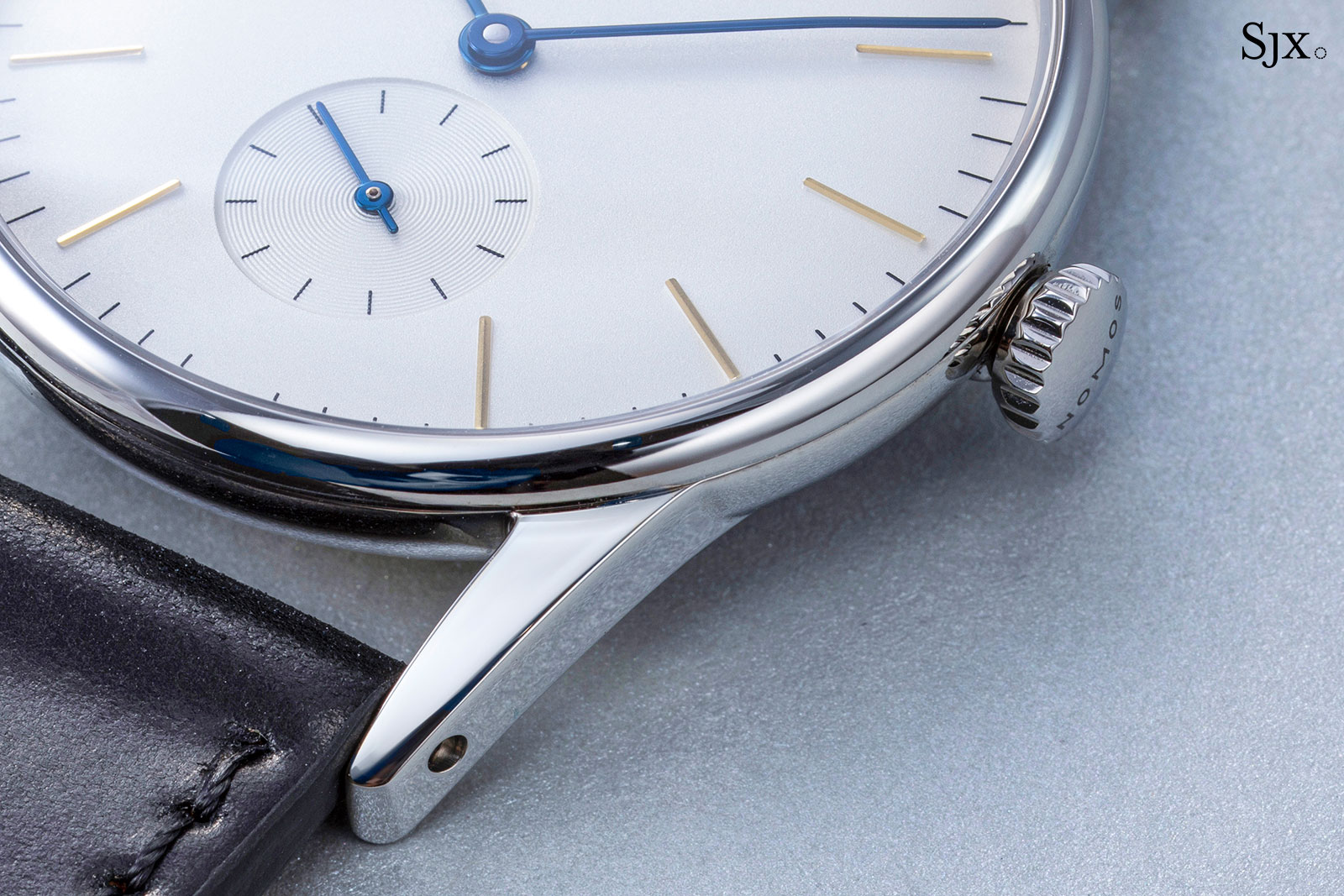 In the hand, the watch inspires confidence, feeling relatively solid despite its thinness and size. The winding feel is refined, with each click distinct but smooth. It is worth mentioning that manual wind movements usually give off a more tactile and mechanical feel than the average automatic movement. This is because the gear ratio in automatic movements is optimised for effective winding, so a slight turn of the rotor can wind the mainspring. That leads to more winding “clicks” for each turn of the crown and generally a mushier action when manually wound.

The downside, however, is the movement in Orion does not have its mainspring designed to slip once it becomes fully wound – unlike an automatic movement, or a more sophisticated manual wind movement equipped with a slipping-bridle mainspring. Instead of  “slipping”, the mainspring will attach to the barrel wall when fully wound, which means the crown can no longer be turned with moderate force – a useful indicator of full wind since it is no power reserve display. Trying to wind the movement beyond that point will damage it. It’s not quite high horology, but the Alpha movement is fun to admire. The Glashutte ribbing, heat-blued screws, magenta jewels, and brass wheels create a richly-coloured landscape.

Closer inspection reveals the biggest highlight of the movement – the double spiral finishing (or solarisation) on the barrel ratchet wheel that is done by hand. The elaborate finishing of the wheel is rare in this price segment as most watches here have basic finishing on those parts. 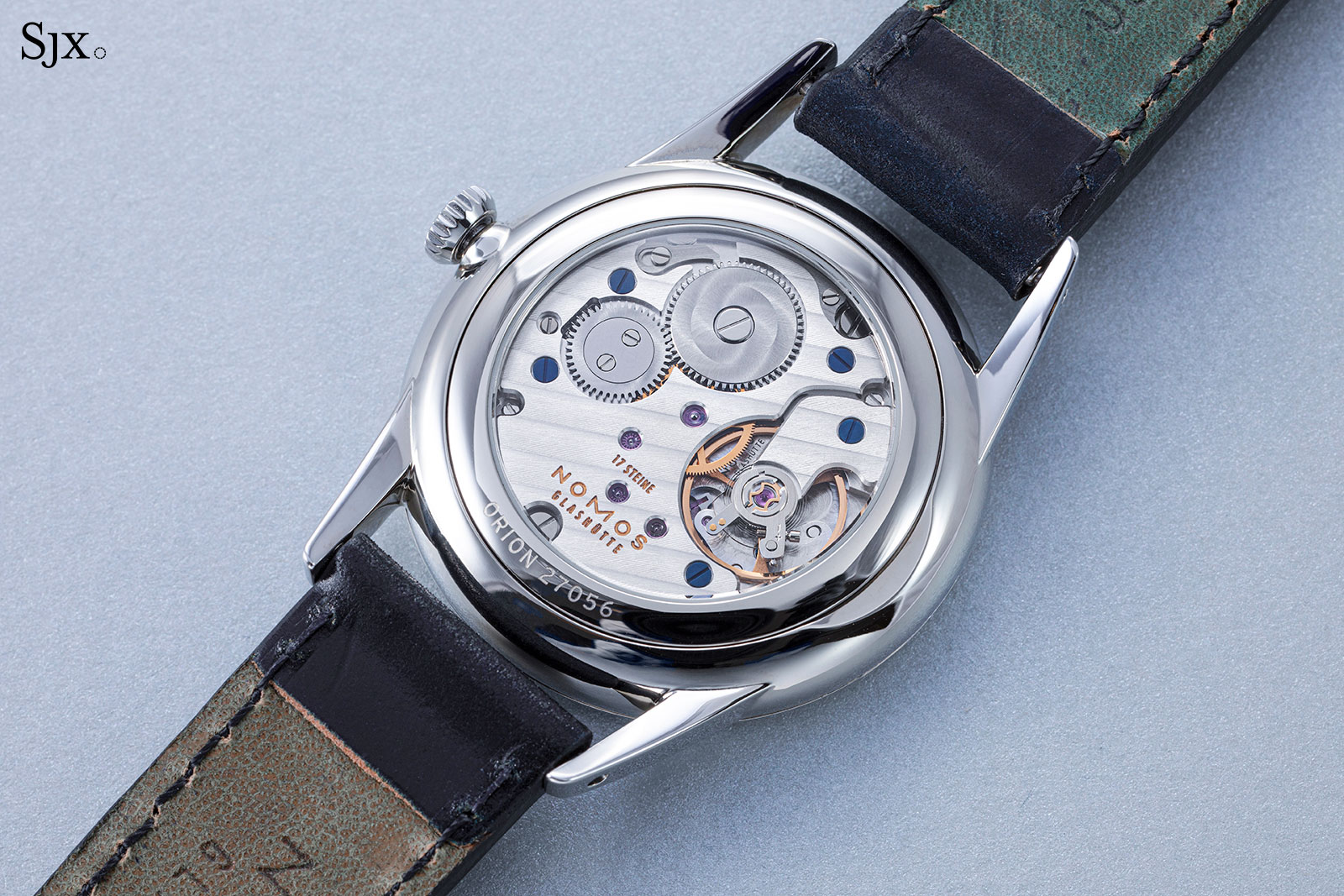 The barrel ratchet wheel (upper) with its double-spiral finish And the crown wheel

Notably, the less visible elements of the movement have also been dressed up. There’s perlage on the base plate underneath the balance for instance. That said, there are expected compromises in the decoration, given the price. The edges of the bridges and countersinks are bevelled by machine and not polished, leaving machining marks on the bevels.

Overall, while largely machine-finished, the movement is clean and appealing, channeling the Deutsche Werkbund philosophy of bringing art and engineering to everyone with mass production. Perlage on the base plate The long winding click spring is an elegant detail

Decoration aside, the movement also offers a lot to see in terms of mechanicals, since there is no rotor (or complications).

Visible around the balance are the jewels of the gear train, which are crucial for the dial design. Specifically, the location of the fourth wheel, which is attached to the second hands, explains why the seconds sub-dial sits high on the dial, closer to the central axis instead of the bottom edge. That’s because the Alpha movement is rather small compared to the dial. Traditional dial layouts usually have the centre of the seconds sub-dial sitting at half the dial radius, a seconds-to-dial proportion that is the most balanced.

In any case, the best proportioned dial amongst the Orion models is found on the 35 mm model, with the largest version having a sub-dial that is even closer to the hands, creating the impression of being located much too high. With the same movement, the bigger the case, the higher the sub-dial sits.

It is heartening to see a “manufacture” movement in the Orion, instead of the ETA or Sellita movements are the norm in this price range.

However, while widely known as an in-house calibre, the Alpha movement is based on Peseux 7001. A compact, robust movement, the 7001 was used by Nomos for almost all of its watches in the brand’s early days, albeit with increasing customisation as the brand developed. In 2005, Nomos did away with modified Peseux 7001 and introduced its own movement based on the 7001, the Alpha. A three-quarter plate dressed up with stripes and blued screws

Some might feel the origin of Alpha dilutes its charm. However, using the tried-and-tested Peseux 7001 as the foundation improves the reliability of the movement, while also making it affordable, arguably the two most important qualities for a movement in this price segment.

Moreover, Nomos manufactures almost all parts for Alpha in its own Glashütte facility, with the exceptions of the mainspring, escapement, and jewels. That allows the brand to use the “Glashütte” label on its movements, which requires producing over 50% of the parts in the town.

And not only is it made in-house, the Alpha is heavily upgraded. Nomos’s devotion to improving the Alpha meant substantial changes to the architecture of the 7001. The multi-bridge layout of the 7001 is a three-quarter plate in the Alpha, harking back to its German origins and also requiring higher precision during assembly.

And it is not just aesthetic tweaks. The Alpha features a stop seconds, allowing for precise time setting, a useful feature that the Peseux 7001 lacks. The Nomos has a diverse competition, ranging from the equally affordable to the more deluxe.

Seiko Presage Prestige, White Enamel Dial (Ref. SPB113J1)
Inspired by designer Riki Watanabe’s famous 1977 Steel Clock, this is a Japanese take on the minimalist watch. The highlight is the fired enamel dial. While the edges of the enamel dial are a bit rough, it is something rarely found on affordable watches. With 100 m water resistance and 70 hours of run time, it is a nice daily watch.

Junghans max bill Automatic, White Dial (Ref. 027/4700.02)
Designed by one of the Bauhaus movement’s most famous members, Max Bill, this is perhaps the most obvious alternative to the Orion. However, at half the Orion’s price, the Max Bill watch is not a direct competitor. The difference in price results in an evident difference in fit, finish, and specs. The movement inside the Max Bill is an ETA-2824 that is almost stock. On the other hand, the dial finishing on the Junghans is just as nicely done as on the Nomos, and it has a tiny bit of “lume” for nighttime legibility, something the Orion lacks.

Grand Seiko Heritage Quartz, White Dial (Ref. SBGX259)
The dial on the Grand Seiko is the most elaborate amongst the watches featured here. The highlight of the SBGX259 is also its weakness, the 9F62 movement inside. It’s quartz but ultra high-end quartz – hand-assembled, equipped with an instantaneous date jump function, and regulated to a maximum deviation of 10 seconds per year.

Tudor Black Bay 36, Blue Dial (Ref. M79500-0004)
Though very different from the Orion, the Black Bay 36 resembles the Orion in terms of practicality in design. The case and dial finishing are neatly done, and good for an affordable, everyday watch. The movement is a top-grade ETA-2824 that’s regulated to COSC standards. The bracelet and clasp are well engineered, and there is micro adjustment for better sizing. The Black Bay 36 is perhaps the most balanced in terms of quality of design and case, making it a long-lasting timepiece. A version with an in-house movement – Tudor charges only a small premium for an in-house movement – would probably trump all the others.

The Orion is clean and youthful, making it a versatile everyday wearer. The ownership experience is fun – it is pleasing to wind and admire through the display back (which is an optional feature that costs a little more).

Most importantly, the pricing is reasonable and entry-level. The Orion is strong value given its smart design, finishing, and movement origins.